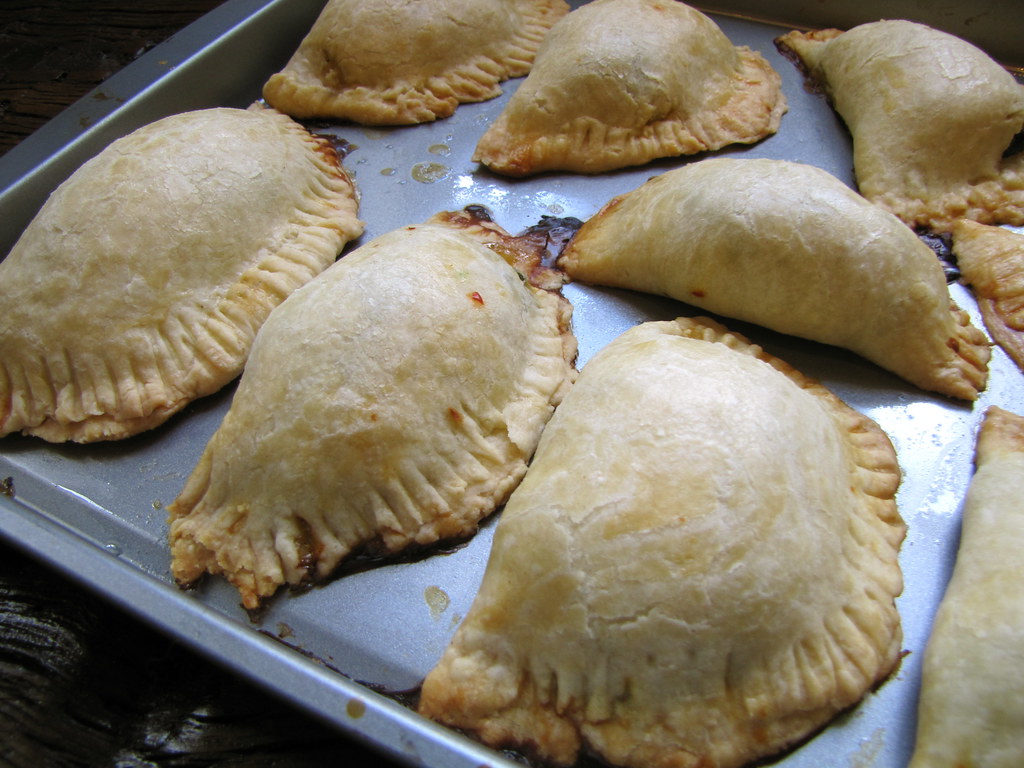 My friend was talking about how she’d made spanakopita, the Greek savory spinach pie, recently. Only, she didn’t actually finish making it: “The filling was so good I just ate it up with a spoon, and didn’t bake it with the crust.” She was also impressed with how much spinach she had eaten; the one-pound bag, the size of a fluffy pillow, had all cooked down to a portion that neatly filled a soup bowl. That’s a good way to eat a lot of spinach, I thought. And, why had I never made spanakopita before?


Well, it turns out that I didn’t end up making it, either. I’d still like to sometime. But even though both my friend and I might have failed at that task, I think we’re pretty smug about each of our outcomes. Before heading to the store to buy ingredients, I checked my refrigerator for what dairy products I might already have. The Greek pie has a stuffing bound with eggs, ricotta and feta, and I had none. However, a jar of Mama O’s Kimchee, recently given to me by my friend and its maker, Kheedim Oh, jumped at me front and center with its vermillion glare. To hell with cheese, I thought. I’ll take spicy, briny, tart pickled cabbage over feta this time. 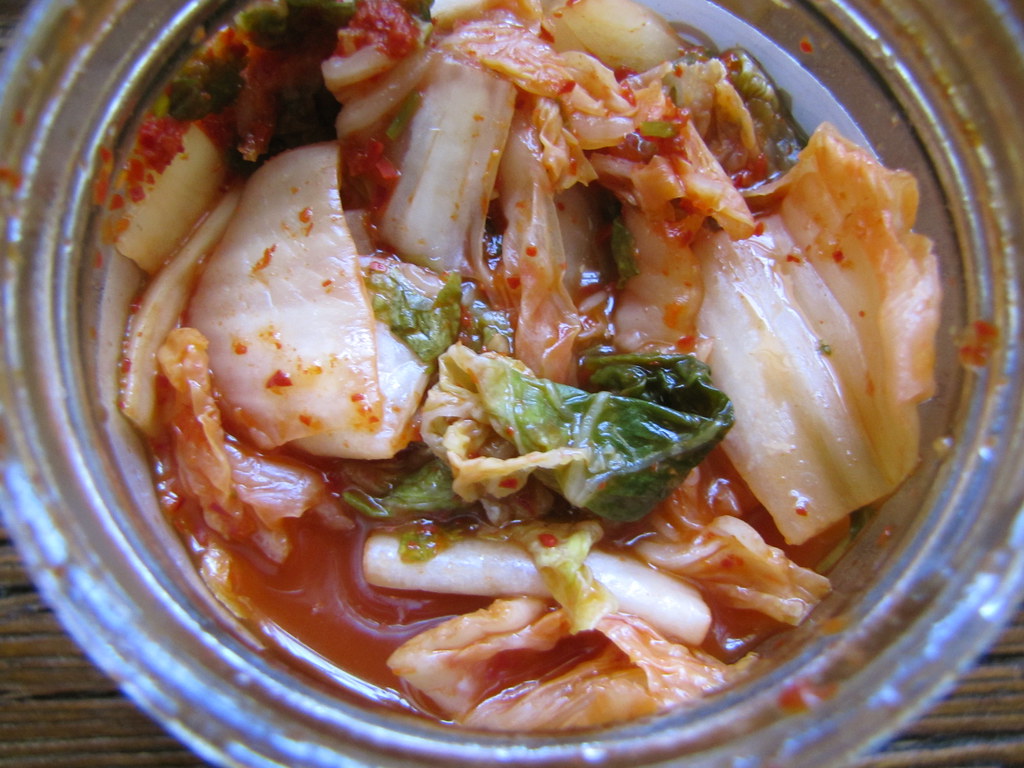 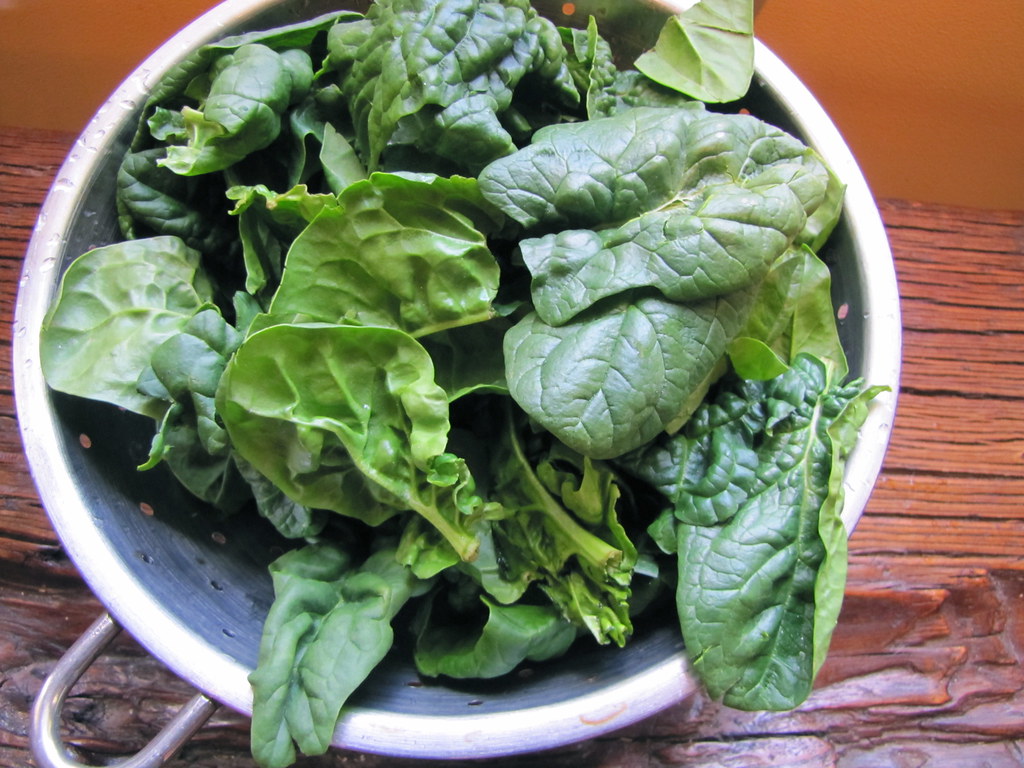 A buttery pastry crust is the perfect contrast for the combination of sour kimchee and densely packed greens. It is, too, a great way to get lots of vitamin-rich spinach in one’s system — you might feel like Popeye after a few bites. I skipped the onion that’s usually found in the filling of spanakopita as I didn’t think the flavor would quite jibe, but minced up two cloves of garlic to sautee the spinach with instead. Once it was wilted and cooled, I stirred in a beaten egg, and enough strained kimchee to make up about 25%. If you really like kimchee and want to go whole hog, I don’t see why 100% wouldn’t taste great. Baking the pickled cabbage in a crust mellows its flavor significantly, so it wouldn’t punch you in the face. 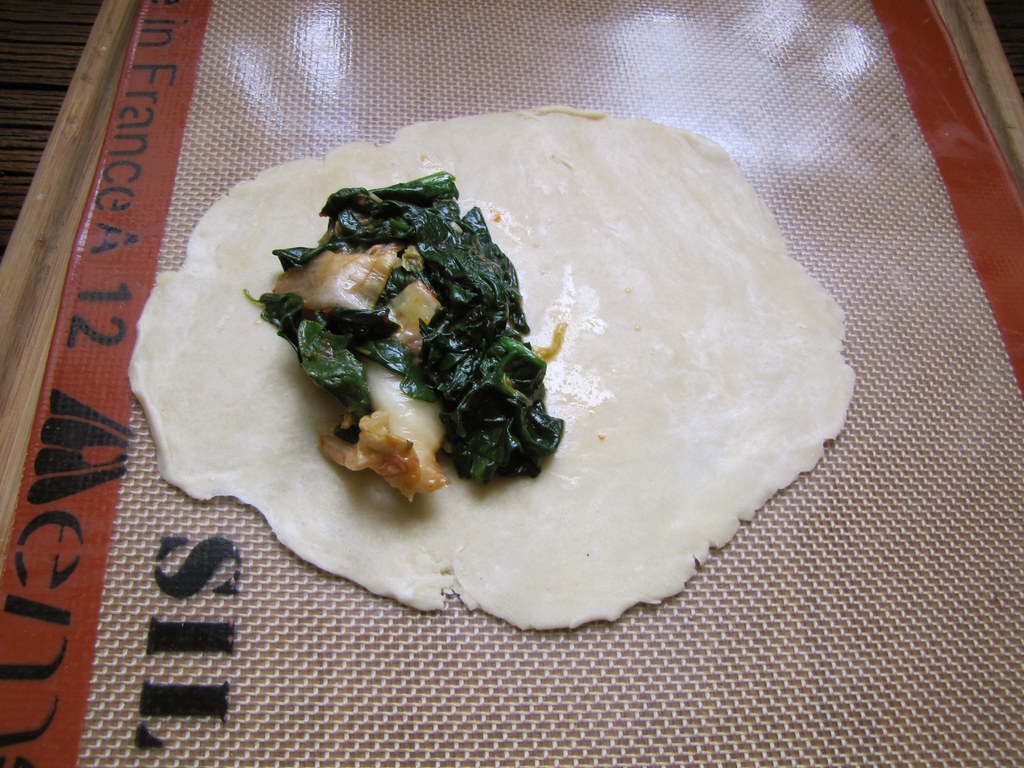 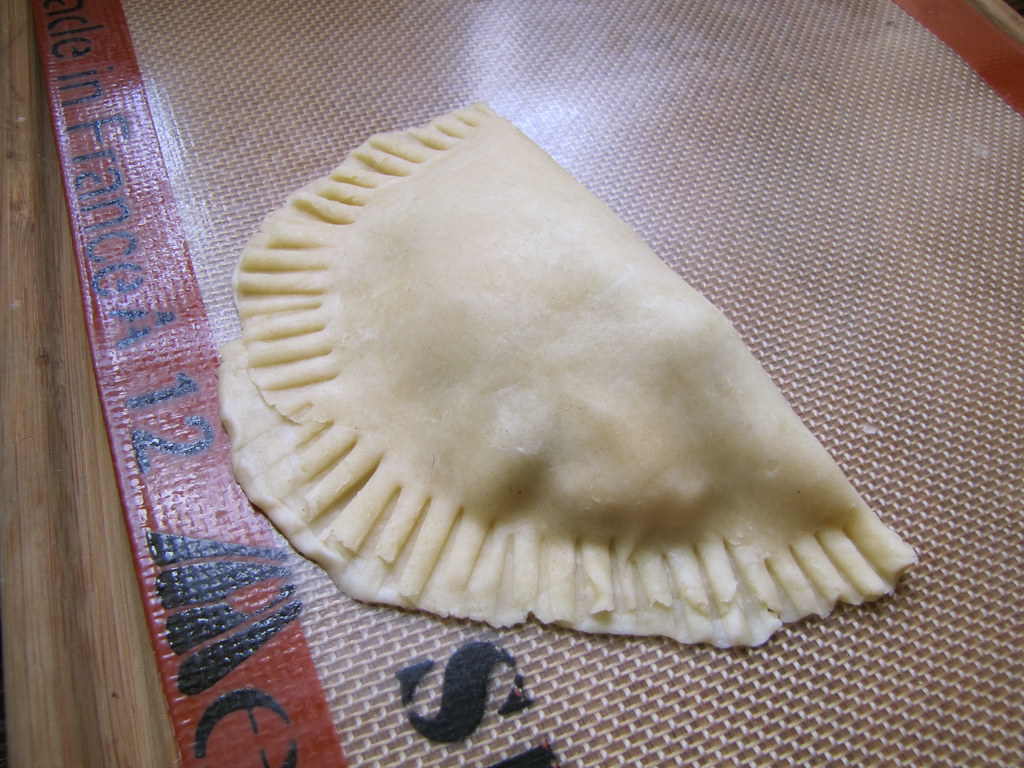 In theory, I wanted to make a flaky puff pastry crust, but in practice I just wasn’t up for rolling out fold after fold of butter and dough. I like my basic pastry — universally salty, even for fruit pies — enough, besides, and making this is something that I’ll gladly do. I upped the butter and salt just a little bit in this recipe, and brushed the tops of each pie with egg wash. I’d decided against making one big pie, but hand-held miniature ones, which are great to freeze and reheat afterwards, and are much more portable (incidentally, I wound up bringing the whole batch to a birthday party for the friend mentioned above). The way I folded the pastry over a mound of filling and crimped the edges sealed was actually identical to the time I made vegetarian Jamaican patties, only without the brilliant tinge of turmeric in the dough. It was just the most practical way I could think of forming them, fully closed. 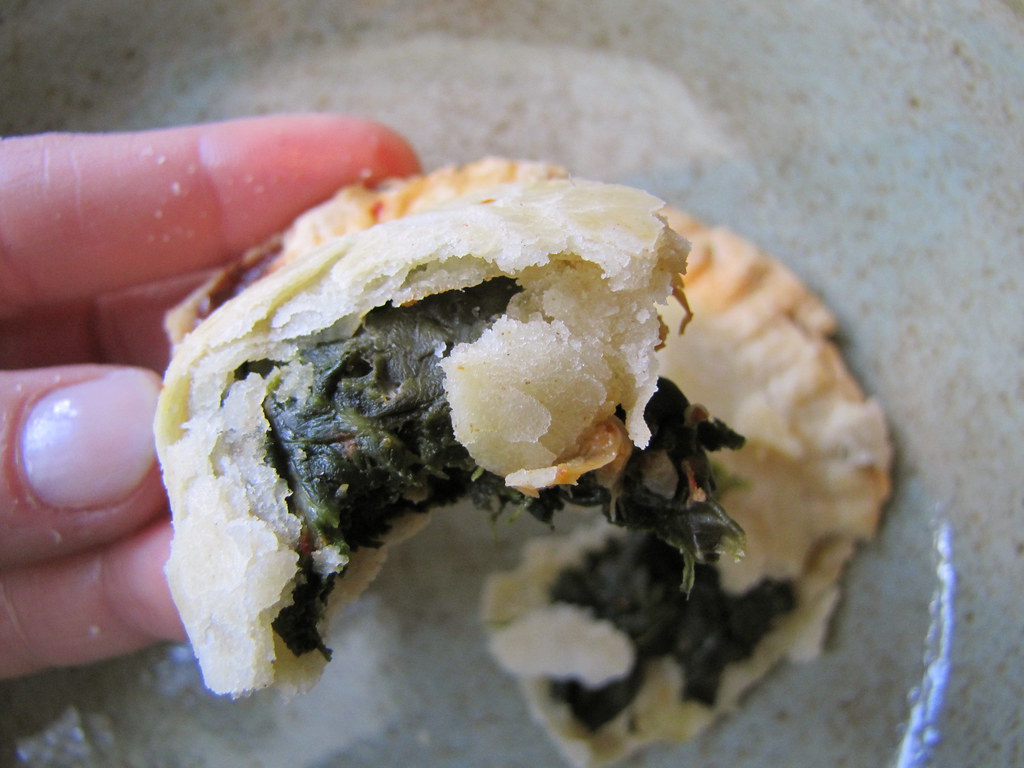 Definitely a hit at the party, and a delicious surprise. Because these pies are totally closed, it was fun to see people’s reactions when eating something they had no idea was inside. And, just to have a little more fun, I’d made another batch of pies with curried cauliflower inside, too. But those just weren’t as tasty as the spinach and kimchee ones, I thought.

Cut the flour and salt into the butter cubes using a pastry cutter, food processor, or your hands, until butter chunks are no larger than a pea. Add the cold water a tablespoon at a time just until the dough comes together enough to form a ball. Cover with plastic and refrigerate for 20 minutes.

Heat a large pan with the oil and add the garlic. Once fragrant, add the spinach and stir until completely wilted, about 2-3 minutes (you may need to work in batches to get it all down). Sprinkle with a pinch of salt and pepper as you cook. Transfer to a mixing bowl and let cool completely. Add the beaten egg and the kimchee to the mixture and stir to combine.

Remove a clump about 1/4 cup from the ball of dough and press out on a lightly floured surface. Roll out an oval about six inches long by three to four inches wide, using your hands to press out cleaner, less ragged edges. Place about two tablespoons of the spinach mixture on one side of the oval, and fold over the other side. Use your hands again to press the edges shut and crimp with the prongs of a fork. Brush top with the egg wash. Repeat with the remaining dough and filling, and arrange spaced apart on a lightly greased cookie sheet.

Bake at 375 degrees for about 20 minutes, or until tops are golden-brown. Let cool 10 minutes before removing from tray and serving. Can be frozen and reheated in microwave or oven.

Six brownie points: Consider it a much more healthful alternative to pigs in a blanket. This snack satisfies the craving for a rich, flaky crust, and gives you lots more. Spinach is a well-known power food that has so much antioxidants you’ll be set for Vitamin C for the day with this. And, Vitamin K, and, you’ll get small doses of iron and calcium. And, well, there could be a whole book on what points spinach gives you health-wise, but let’s move onto the kimchee. It’s used primary for flavoring here, but kimchee is a live-culture, probiotic food that aids digestion, and this and other types of preserved cabbage been a survival mechanism for cultures living in cold, harsh climates such as Korea for thousands of years. Eat it up!

Eight maple leaves: Not to mention that the filling of this pie is in fact, very deep green (in color), this is a handy recipe to make in any climate, at pretty much any time of the year. I was able to source some spinach recently at the farmers’ market and bought a couple big bagfuls, perhaps to make soup with, I thought. Spinach is a surprisingly hardy winter vegetable, for having such delicate, thin leaves. Each time the snow has melted away enough to see what’s left of the plants on my roof garden, the spinach has sprang back up, from the frozen dead. My plants still have baby-sized leaves and were good enough to eat in sandwiches recently, but I simply didn’t have enough to fill these pies. The kimchee, as mentioned, was made by local artisanal outfit, Mama O’s Kimchee. It totally rocks.