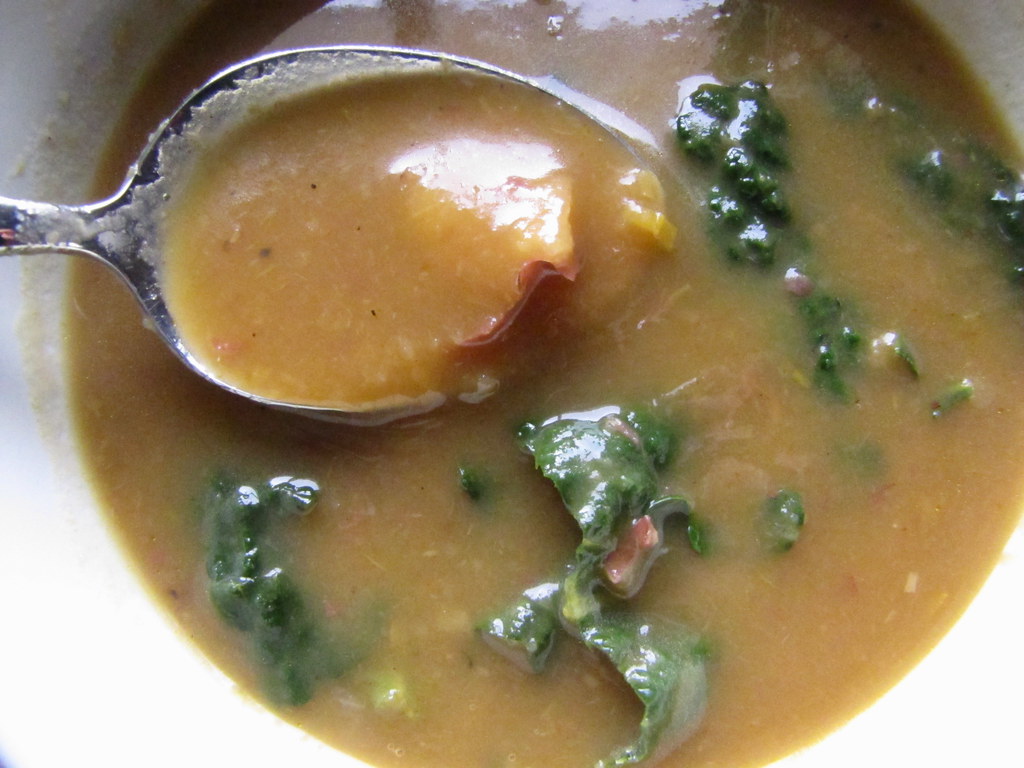 Today was gusty like a regular dust storm, at least in Red Hook where I was a-working. And there was some music playing, by a feller named Woody Guthrie, and he was a-talkin about some dust storm in a song called “Talking Dust Bowl Blues.” In one verse, he sings, “My wife fixed up a tater stew,” and it got me hungry and thinkin’ food. So I’ll stop with the bad sing-song writing here, but now you know the reason for it.


It seemed like a good day to revisit the classic potato leek soup anyway. Now, I’m guessing this soup is a tad bit thicker than the ‘tater stew poor Woody describes in the song, and probably more flavorful, too. But it’s still a modest, all-vegetable affair. (The lyrics of that song may make you feel lucky about eating at all.) 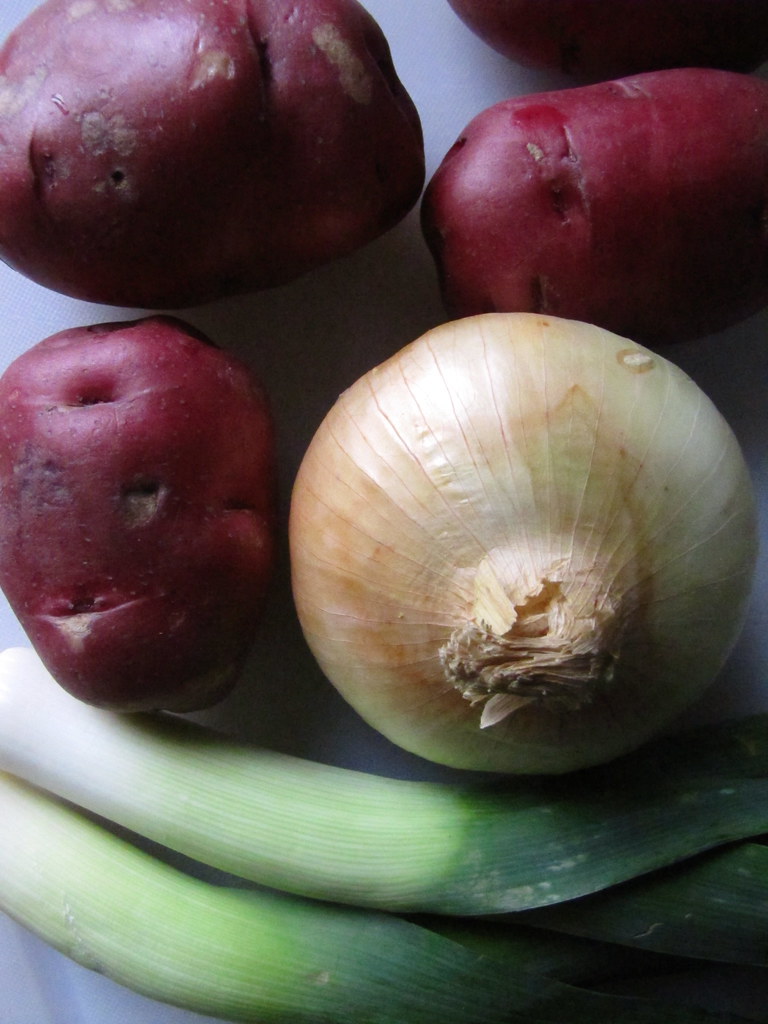 I tried to take best advantage of the taters’ natural sweetness by roasting them until golden first. Since I was doing that, I roasted the onions, too. And I made sure to buy types of both that would create the most caramelization, so it was red potatoes (with the skins on — waste not, want not!), and Vidalia onions, on the roasting pan. You can use another waxy, less starchy potato with a good amount of sweetness instead, such as Yukon gold or fingerling varieties. I’ve just been roasting red potatoes for breakfast a lot lately, and noticed how tasty they were on their own. 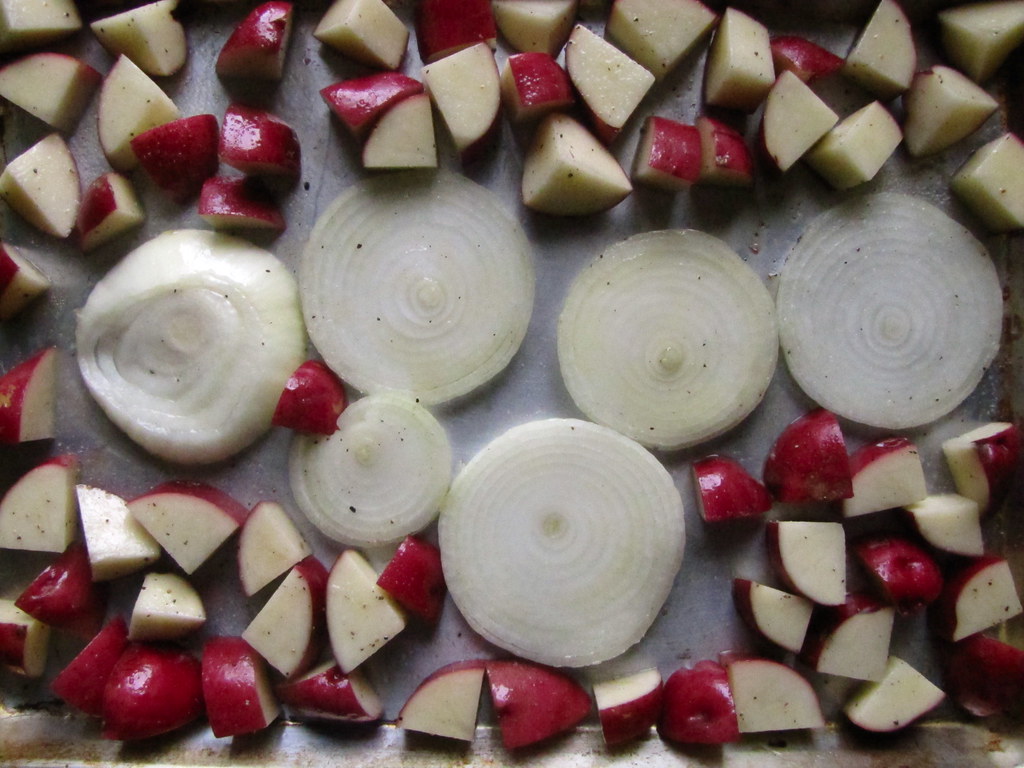 onion slices and potato wedges before roasting in olive oil 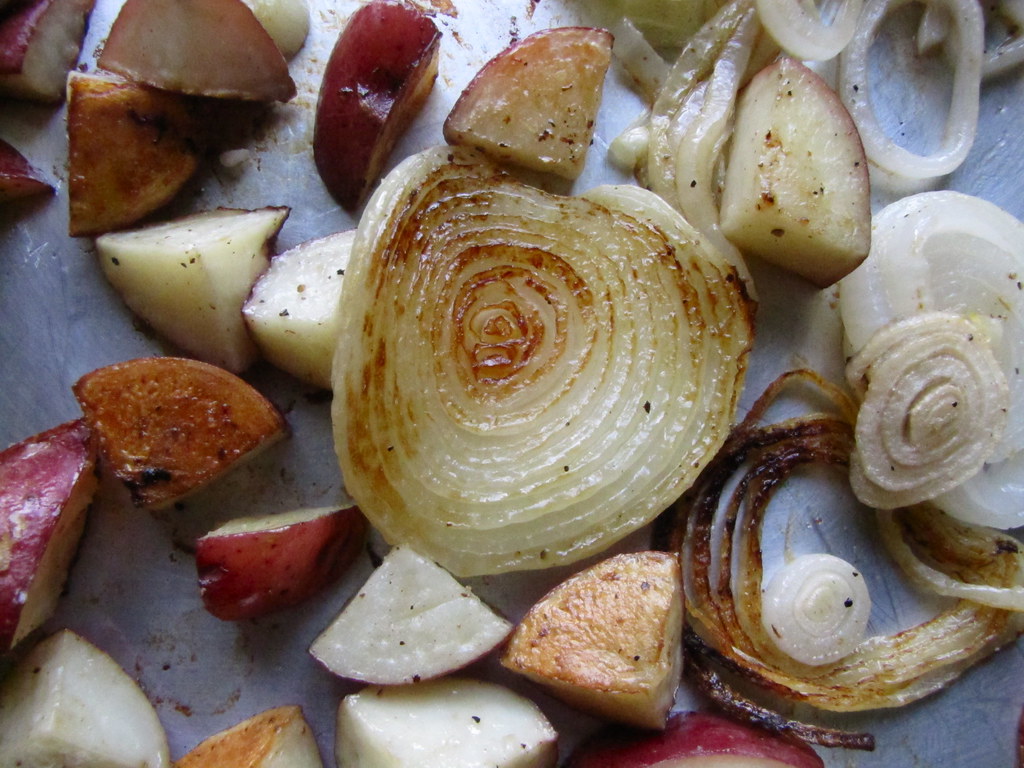 The leeks were left to sautee in the soup pot instead; I thought a more fresh, mild onion flavor would help round it out. The vegetable stock was made a few days ago, heavy on carrots and celery, with some cabbage thrown in just because it was leftover, too. It was a reddish-brown stock, and it turned even darker brown once I added the roasted potatoes and onions to it. They had caramelized as much as I’d hoped. 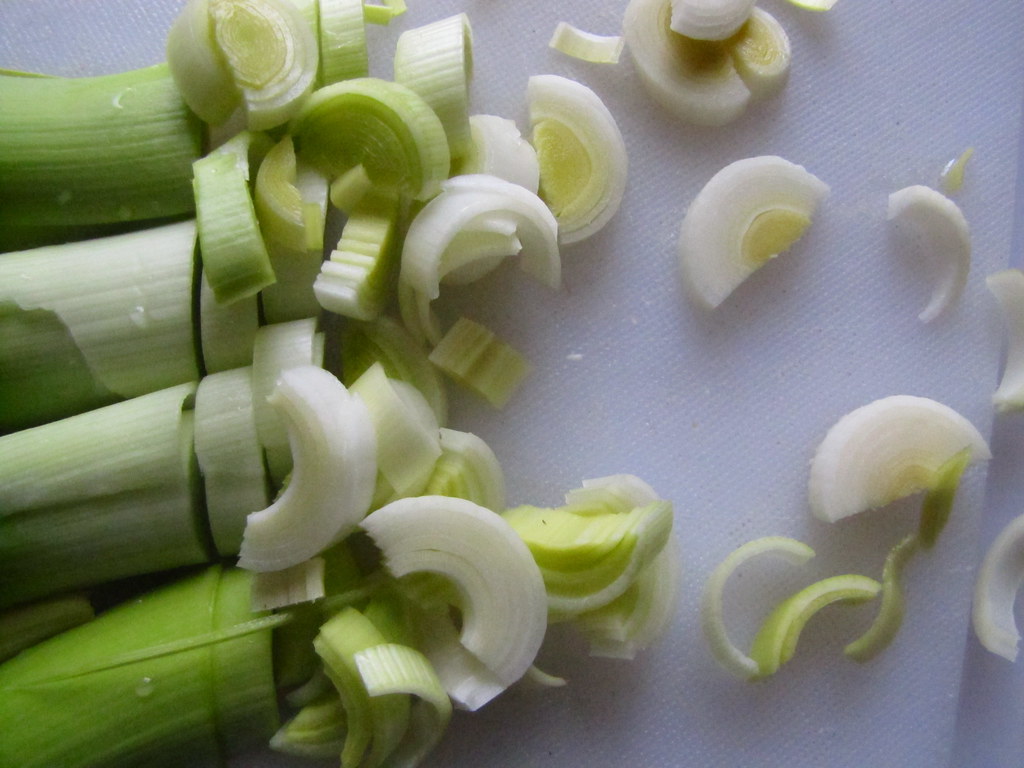 Making soup, whether you’re working with luxurious ingredients or more paltry, is one of the most fun for me because it’s left to endless creativity. I’ve been known to squirt Sriracha into minestrone when no one was looking, or let a cinnamon stick sit at the bottom of the pot while simmering. It’s a playful pastime, and just like a painting, you can always alter the outcome as you go along. For this soup, I added one impulsive ingredient that I thought it could really use, not so much for flavor but for better survival, if you’re roughin’ it dust bowl-style: kale. 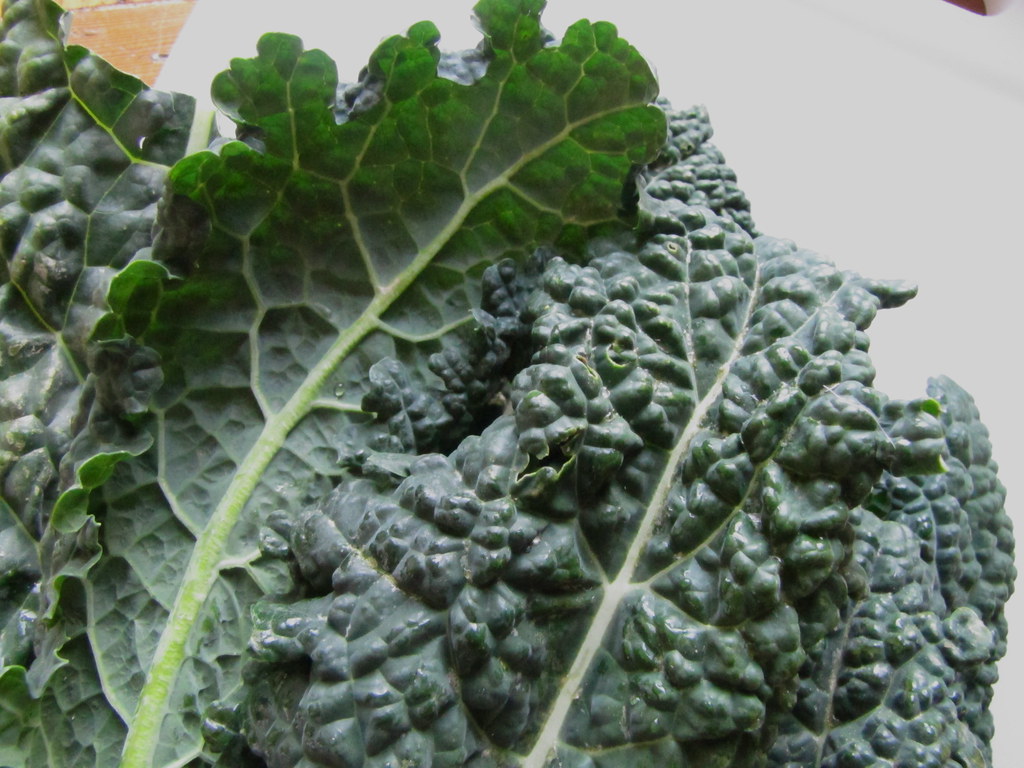 You can stuff a lot of leafy greens into soup once they’ve wilted. I simply tore the crinkly leaves by hand over the pot and let them drop in. It was Dinosaur kale, so especially firm, although you can use any variety and for that matter, other nutritious leafy greens like spinach or Swiss chard, too. Beware of bitter ones, though, like mustard greens, which could completely overpower the delicate potato-leek base.

So what started as a take on potato leek soup, with roasted vegetables, turned into a bit more of a well-rounded meal. Shouldn’t we all be so fortunate?

Preheat oven to 375 degrees. Coat the potato wedges and onion slices with olive oil, salt and pepper and arrange in a single layer on a roasting tray. Roast for about 15 minutes, or until golden on the bottoms. Flip onions and/or potatoes halfway into roasting if desired.

Sautee the chopped leeks with butter in a large pot or Dutch oven. Season with salt and pepper. Cook, stirring occasionally, 6-8 minutes or until well softened. Add the stock, roasted potatoes and onion and bay leaf. Bring to a boil and reduce to a simmer; cover and cook 30 minutes.

Remove bay leaf and use a hand blender to puree soup as much as desired (I like some chunks still swimming about). Add torn kale and stir over medium heat until wilted. Add salt and pepper to taste. Add the optional cream or half-and-half. Heat through (but don’t bring to a boil) afterward, and serve.

Three brownie points: Roasting vegetables is a really good way to bring out its natural sugars… which is a really good way to add more sugars to your food. But this is a pretty innocent trick when you’re dealing with a soup that’s so wholesome and light. You could beef it up for a heartier occasion by sizzling up cubes of bacon along with the leeks at the beginning, or adding that cream and more butter. Just don’t forget to add the kale, or else the brownie points will start really adding up.

Eight maple leaves: This one is so roughing it winter farmers’ market-style. Potatoes, onions, leeks and kale have kept well throughout the winter and are still in good supply from local farms in my region, at least. Here’s to finding more ways to use them.