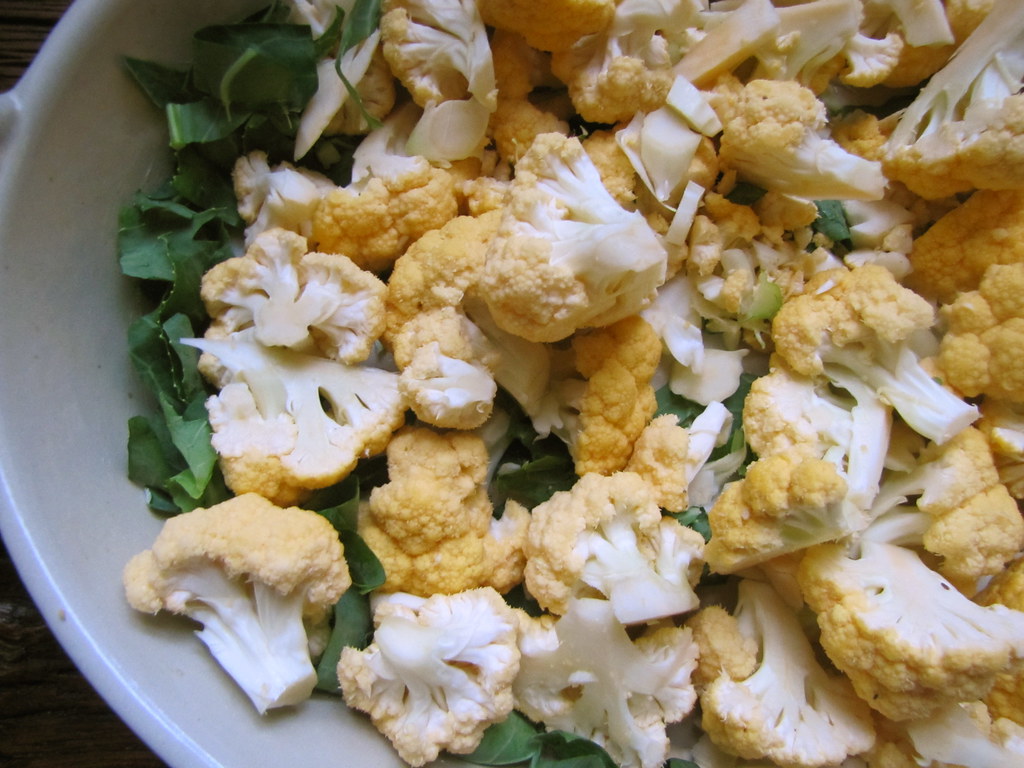 So I entered the Casserole Party this year. It was a bit of a last-minute decision: the same afternoon, I chatted with the annual cookoff’s hostess Emily Farris on Let’s Eat In. It was enough to persuade me to run home and rummage through the kitchen to come up with something fast. After all, that’s what a casserole is best for, to combine whatever delicious things you have on hand in one dish. A casserole dish, to be exact. Well, I had a crisp head of orange cauliflower, and some home-cured salmon from my CSA stash. It seemed like a pretty good start.


But then, I’m not the authority on what a casserole is. Emily’s devoted a book to this subject, called Casserole Crazy, and is just that. I’ve had loads of fun learning about casserole cookery from her, and even had the honor of contributing a recipe to her book. That said, I think my cauliflower casserole here is more of a hearty vegetable side, or gratin. Whereas the traditional casserole as a staple family meal seems to imply something you can scoop into and get all your food groups. Oh well, I’m not from the Midwest. 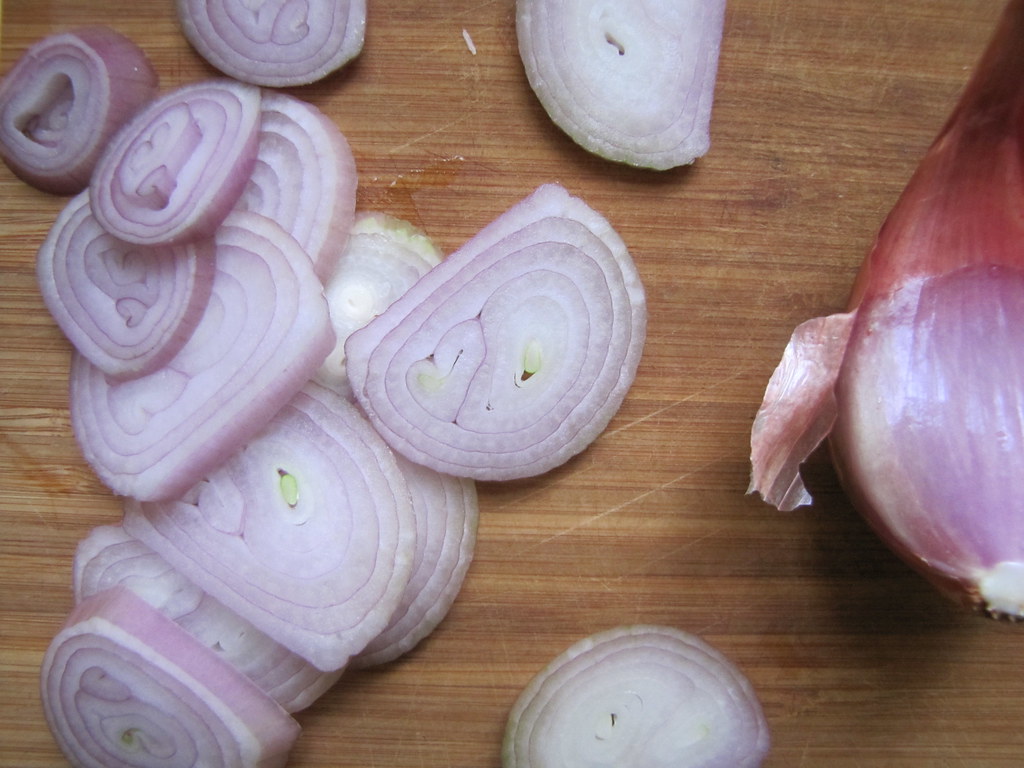 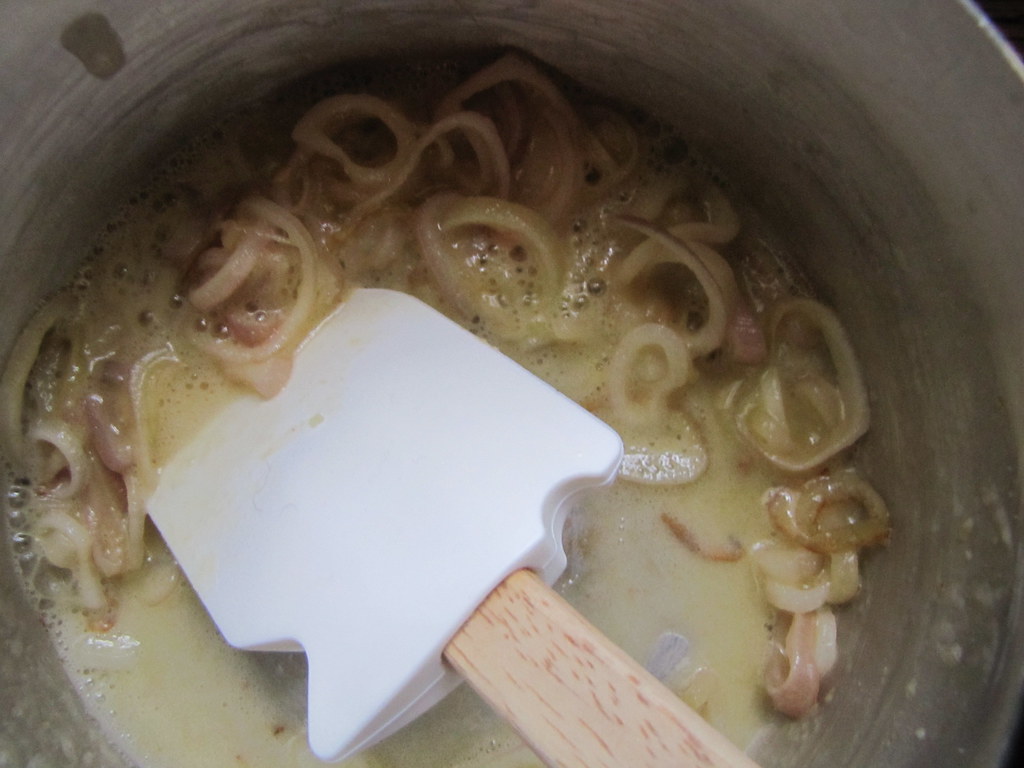 with butter, beginning to froth

According to Emily, a casserole is at least two ingredients baked in a casserole dish with a binding agent of some sort, like cheese or a sauce. My binding agent was bechamel sauce, sprinkled with bits of cured salmon and lemon juice. I started out with some sliced shallots and butter, added flour, then stirred in the milk until it was thick. 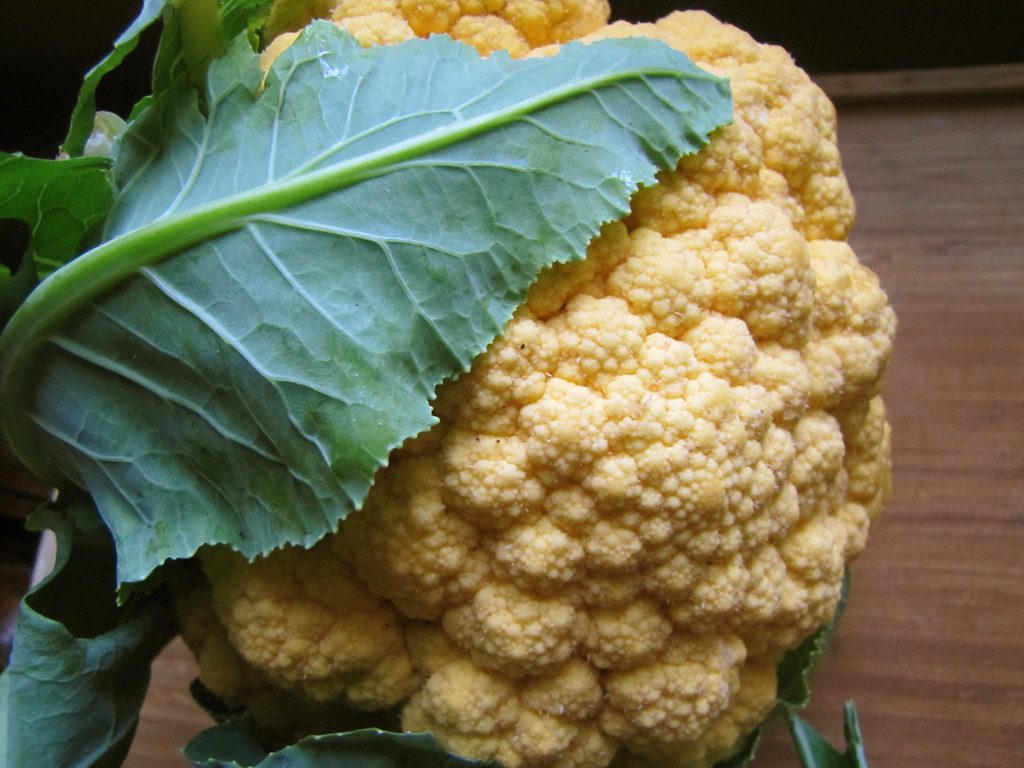 I’d gotten two beautiful heads of cauliflower from the Greenmarket last weekend; one was ultraviolet, and the other one orange. They were so fresh I couldn’t stop eating the crunchy raw pieces as I chopped. I ate the purple head with penne pasta the night before, with some grated Pecorino Romano and fresh lemon juice. It was so good I added lemon and Pecorino Romano both to my bechamel sauce for this casserole, too. 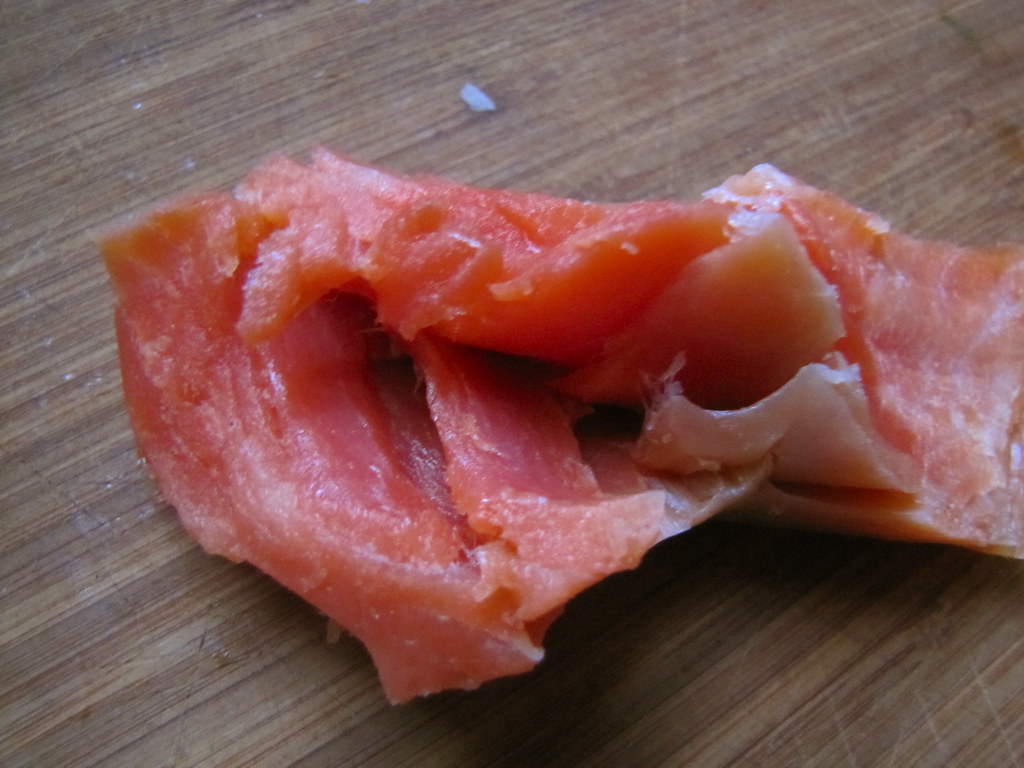 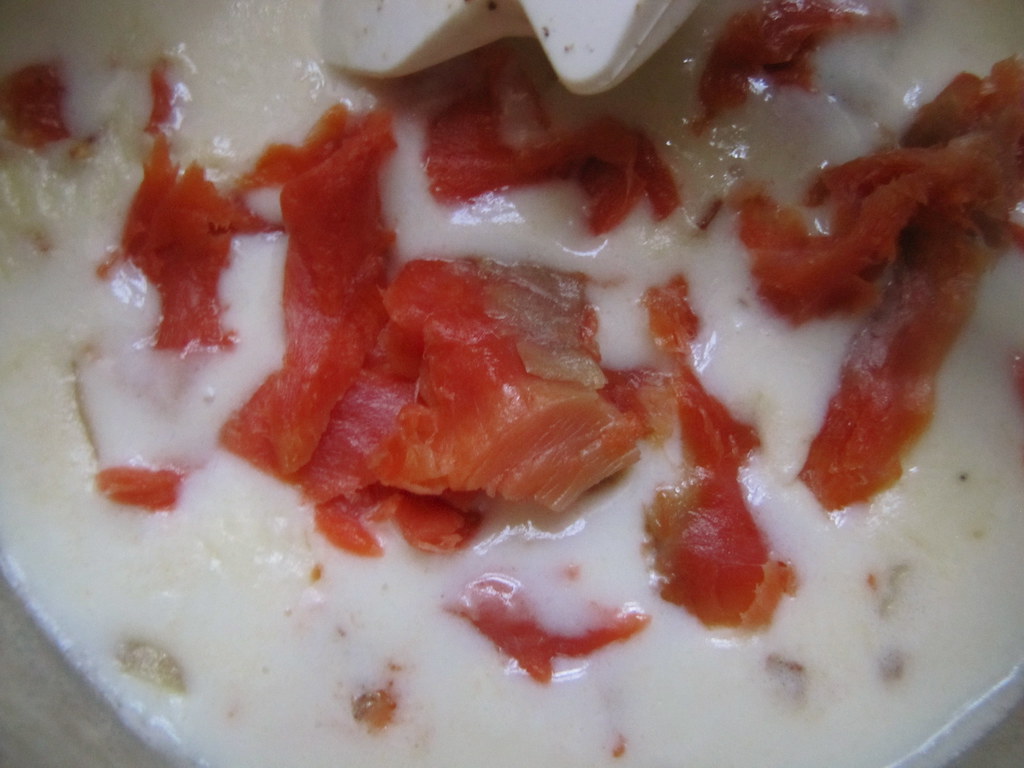 the flaky pieces are tossed in the bechamel sauce

I’m slowly plowing through the twelve pounds of wild-caught sockeye salmon I got from an Alaska fishery through a special CSA. I’ve cured, broiled, and seared a lot of it, and was down to the last stub or so of a cured fillet as of yesterday. So I broke it up and tossed the last pieces of it into the bechamel, too.

This was the point in my casserole-making mission when I started to wonder what else I could throw into the dish. Herbs and some fresh scallions already went in. I thought it could use more green, though, since both the cauliflower and salmon were on the redder end of the spectrum. And there they were — cauliflower greens. Like broccoli, the leaves of this brassica are just as edible as the florets. They’re more of a sauteeing green, since they can be tough, and you can remove the thick stalks of them if you want. I kept them in as well as the stalk of the cauliflower head, too, and chopped it up to toss into the casserole with the florets and greens. Thou shalt eat all parts of a vegetable, right? This dish makes pretty good (and pretty invisible) use of them all. 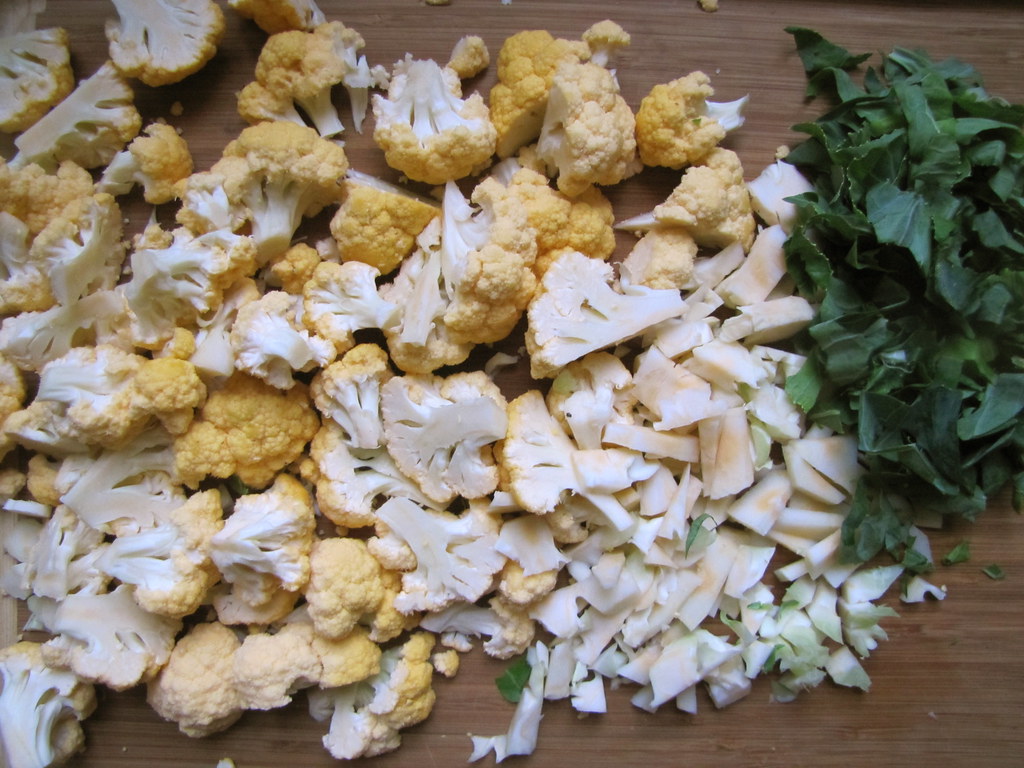 The cauliflower, all parts of it that is, was seasoned with salt and pepper but not cooked before being drenched in that salmon-speckled bechamel sauce. I grated a little more Pecorino Romano on top before shoving it into the oven. Then, the thing started to make the room smell wonderful. I think that’s the best part about casserole-making. It’s hands-off time for a while as it bakes, and the sweet promise of its deliciousness is perfectly illustrated by its creeping aroma. 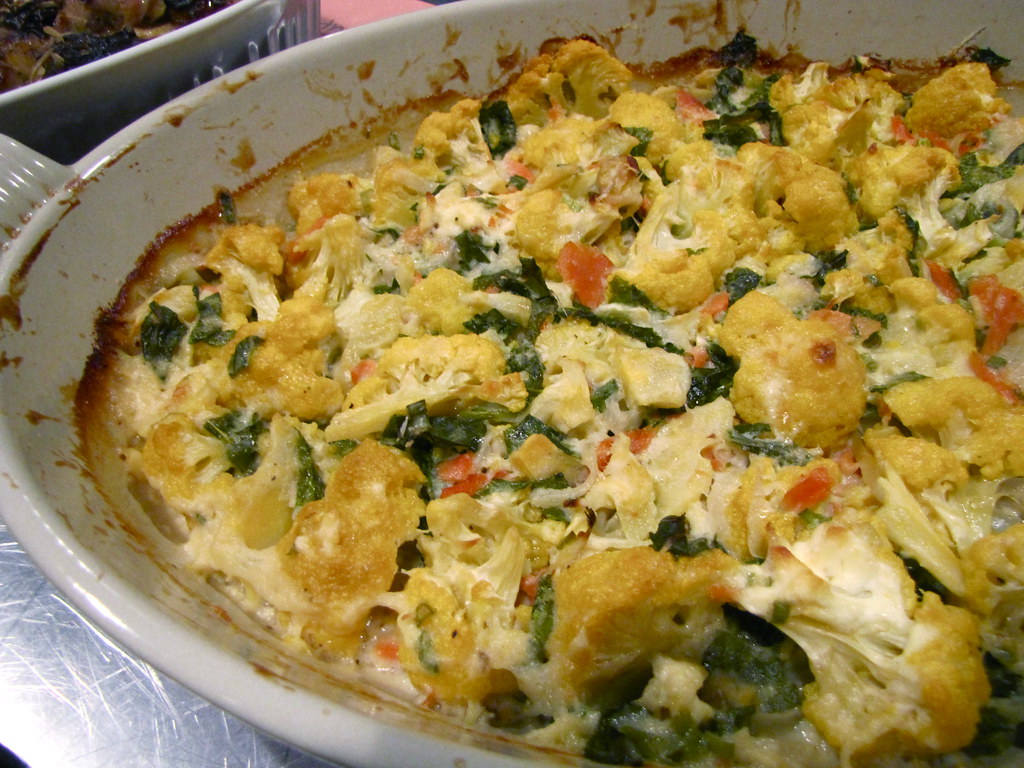 the finished casserole, at the cook-off

This didn’t win the Casserole Party, but then, I had such a good time at it I couldn’t care less. Stay tuned, I’ll post a recap of this year’s 6th Annual Brooklyn Casserole Party soon, with the first-place winning recipe from its chef as usual! Check out a blast from the past from the time I judged this contest, two years ago. And, my recipe for the not-winning, but still yummy cauliflower salmon casserole below.

Preheat oven to 385 degrees. Toss the cauliflower (all parts) and scallions in a greased casserole dish and season with salt and pepper.

In a medium saucepan, heat the butter and the shallots and cook over medium heat, stirring occasionally, until translucent. Add the flour and stir. Add the milk and stir frequently until it just begins to bubble and thicken. Add the salmon pieces, lemon juice and zest, herbs and salt and pepper to taste. Pour into the casserole with the cauliflower and toss to coat completely. Sprinkle the remaining grated Pecorino Romano across the top. Bake for 20-25 minutes or until lightly golden on top. Let cool a few minutes before serving.

Five brownie points: I’m right on the fence with this one. On one hand, it’s pretty light as far as most gooey, cheesy casseroles go. On the other hand, it’s a pretty heavy vegetable side dish. In any case, it’s a fine way to enjoy cauliflower, in all its light-tasting, cabbagey flavor and hearty nutrition, too. Cauliflower, no matter what color it is, is packed with antioxidants, enough Vitamin C to meet your daily recommended requirement with a handful of florets alone. It also has folate, potassium and fiber, and eating the green leaves will give you Vitamin K to boot.

Eight brownie points: I can’t even begin to tell you about the difference between really fresh cauliflower and those that are sort of rubbery and more sulfuric. It can make or break the vegetable for you. The difference comes from the time it spent from being cut from the field and getting to your cutting board, and that time is generally so much less when it’s locally grown and sourced from a farmers’ market nearby. Check out the cauliflower in season right now — it’s awesome. This dish has been sourced pretty much entirely from the Grand Army Plaza Greenmarket, except for the lemon, salt, pepper, and my homegrown herbs.