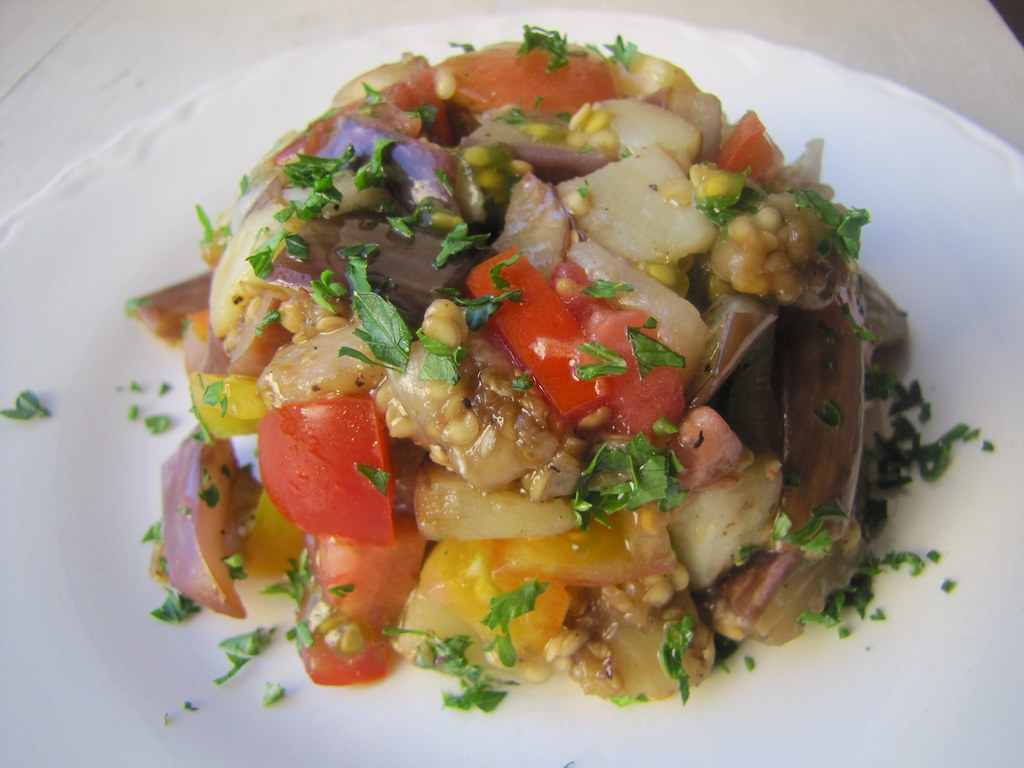 Just another fun way to serve up eggplant, fresh and simple. Because it’s got to be cooked, eggplant tends to get weighed down in heavier preparations — parm, or an Asian stir-fry with lots of gloppy brown sauce. But I love just roasting a skinny eggplant half, face down like a spear, and eating it straight-up like that afterwards, soft and gooey inside. This was more or less what I did for cooking demonstrations two weekends ago at New York Botanical Gardens’ Edible Gardens series, when the theme ingredient was this versatile nightshade.


This week at the Greenmarket, I picked up a few different varieties while it enjoys the height of its season: tiny eggplants, called “fairy eggplants,” a big, brushstroked rosa bianca, and a long, orchid-purple variety I believe is generally called “neon.” Little did I know before going to the Botanical Gardens this summer that what we see at the Greenmarkets are just the tip of the iceberg for eggplant varieties. In one patch of their edible garden, a mind-blowing collection of them were growing. The seeds for these had been hunted down all across the world by some pioneering eggplant preservationist, to whom biodiversity owes a major handshake. I really hope that we’ll begin to see more and more curious eggplants commercially grown in the future. 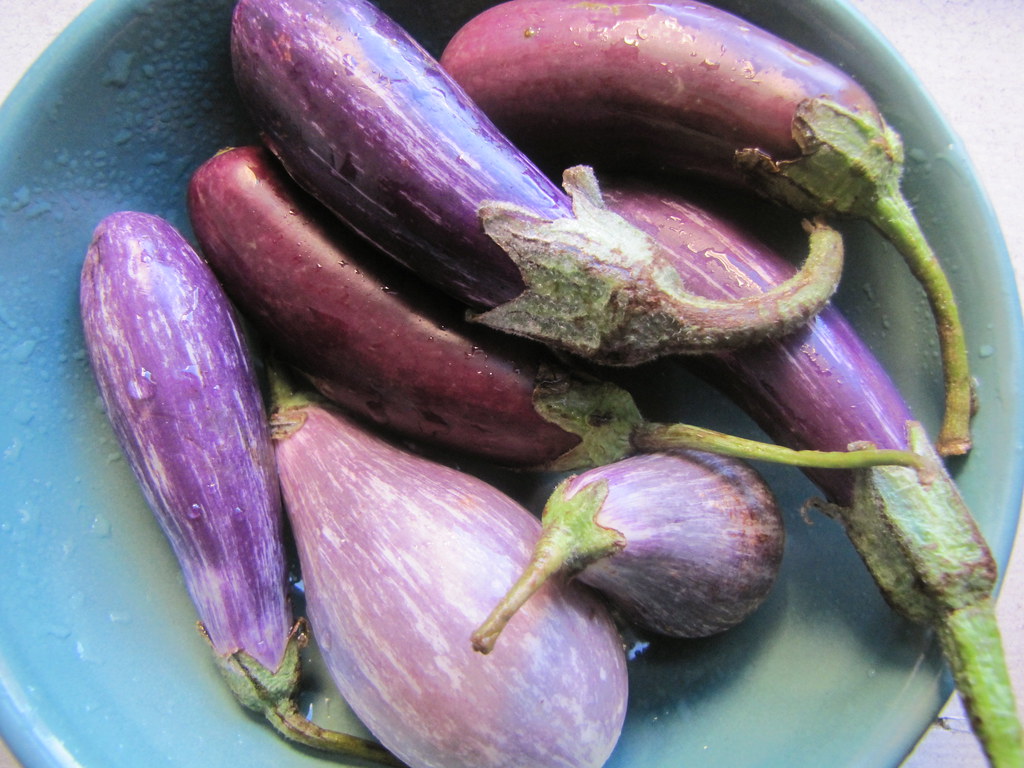 That said, for this recipe, I went with the most conventionally shaped eggplant, a medium-sized rosa bianca (an heirloom variety with beautiful white and purple skin, but that tastes and cooks just like the common ones with deep purple skins). I chopped it into small squares, and doused them with olive oil to get started out.

There aren’t too many vegetarian versions of tartare out there, it seems. The dish, often served as an appetizer with a slice of crusty bread to spread it on, is traditionally finely chopped meat, such as beef, that is dressed and served raw. Tuna and salmon tartare are common homages. I’ve seen chefs nod to the dish before with tomatoes — taking a huge liberty of course with the name, but serving the tomatoes in much the same manner, which appear almost as juicy and jewel-like as meat. 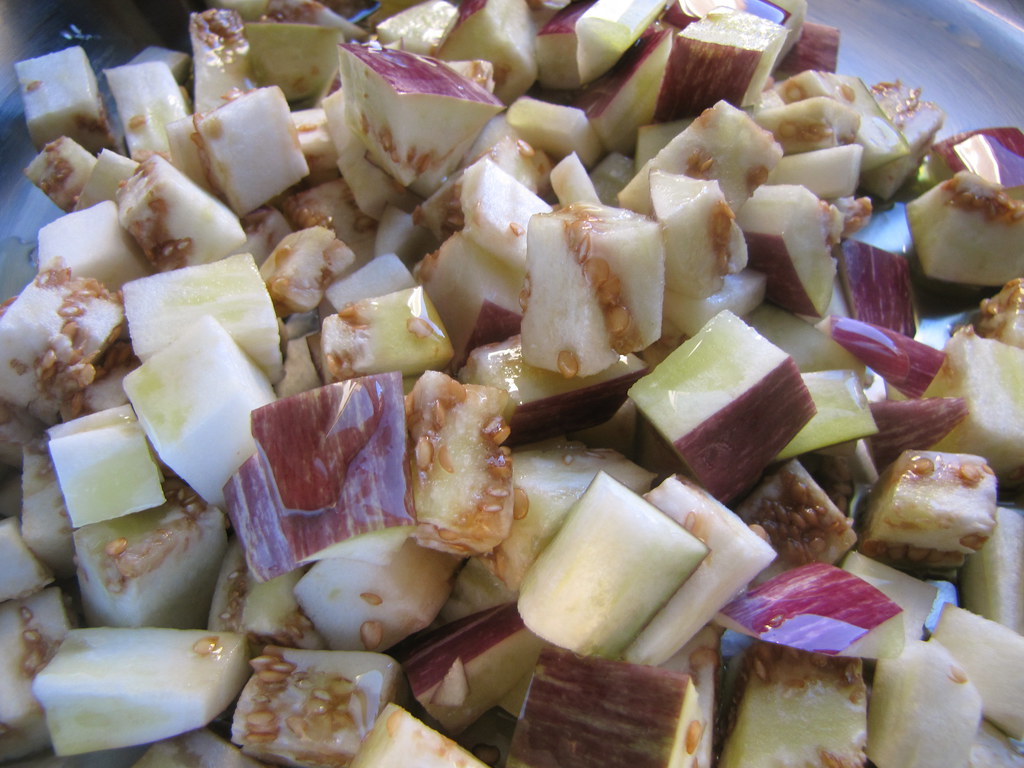 before sauteeing and a quick roast 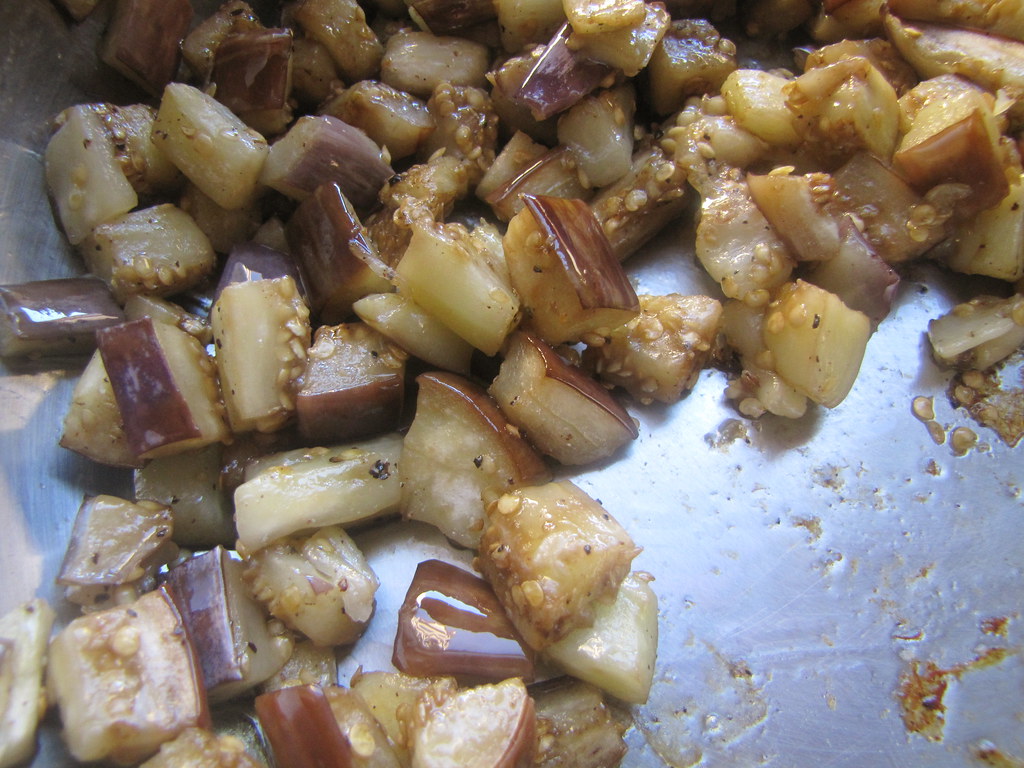 after: still separate, but soft

Well, eggplant can sort of simulate the soft sponginess of meat, too, when prepared like this. My goal was to keep the squares nice and separate, without congealing into a soft mush. It worked out, and I have a suspicion that having a fresh eggplant made this easier on me. After coating the squares in oil, I put them under medium-high heat in a heavy-bottomed pan, one that was big enough that they each got a bit of surface contact. Just when they begin to sizzle, but hopefully before they begin to stick, I stirred them gently with a spatula, and let them sit for another spell. The oven was preheating in the meantime to 375 degrees, and after one more stir, I popped them in so that the entire squares would hopefully cook through. Five minutes later, I took them out, when the smallest pieces were just beginning to lose their shape, and the larger ones were just barely translucent instead of opaque. Perfect! 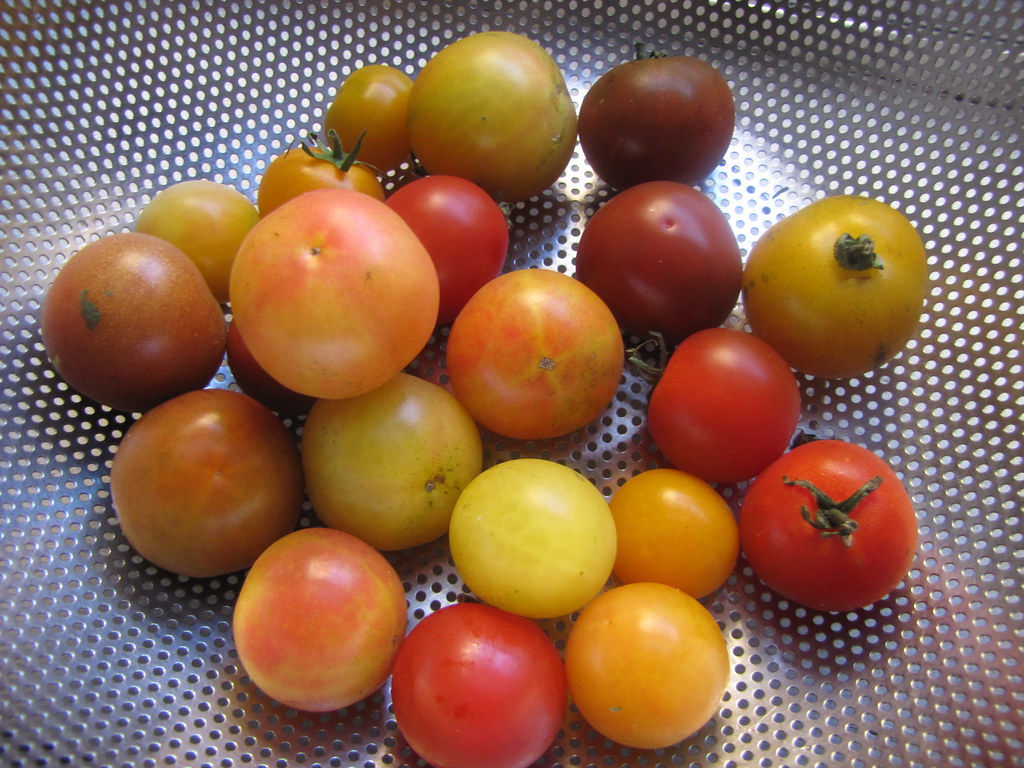 Another score from this week at the Greenmarket was a variety-pint of heirloom cherry tomatoes from Berried Treasures. Francesca’s farm is known for having the best strawberries in the region — and they were still selling them, in September! — but these tomatoes were too attractive to pass up. They kindly let me mix up a pint with multiple varieties, and taste any, too. So tart and sweet, they need no dressing alone. Cut into quarters, they made a great accomplice for my eggplant squares. 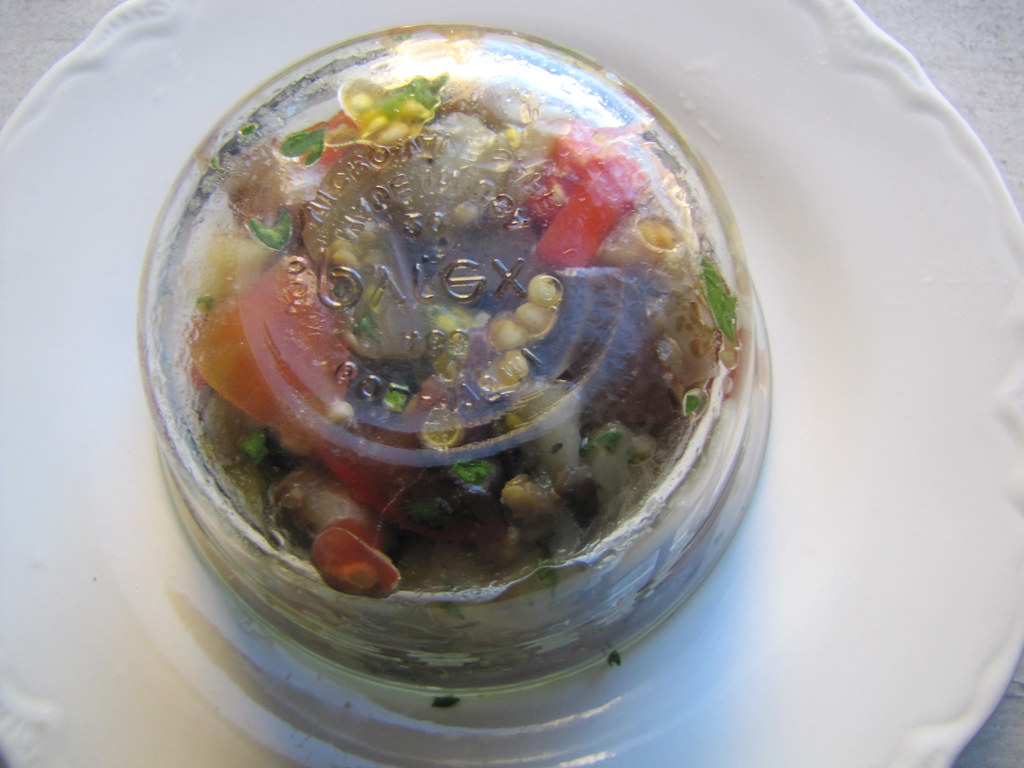 The key to serving this dish like a traditional tartare (that is, neat and tidy from a mold), is packing it into a ramekin. Slip an inverted plate on top, and flip the whole thing over. Wait a couple seconds, and remove the ramekin. Who knew you could eat so fancy, when just messing around at home?

Preheat oven to 375 degrees. Spread eggplant pieces in a wide, heavy-bottomed pan that’s just big enough to give all the pieces some contact with the surface (you may need to work in batches). Coat eggplant with olive oil and place over a medium-high flame. Don’t stir for 1-2 minutes. Season generously with salt and pepper. Gently turn pieces over and stir. Let sit another minute. Gently toss again. Transfer pan to the oven and let cook for 4-6 minutes, or until there is almost no white or opaque parts in the largest pieces. Let cool a couple minutes.

Gently toss with the tomatoes and parsley. Season with more salt and pepper if desired. To serve, pack into ramekins and place an inverted plate on top. Flip over, and remove ramekin.

Four brownie points: Rather than its meaty inspirational dish, this is basically a salad dressed only with olive oil. It’s fun to eat, but it’s also incredibly light. Eggplants provide fiber, folate, Vitamin C and more nutrients you probably didn’t know they had. The cherry tomatoes are plentiful in antioxidants, as well natural sugars. But that’s why you’ll need to season them little, if at all. Finally, parsley not only adds a fresh flourish, but it’s a superfood with tons of Vitamin K!

Nine maple leaves: All that’s not local, organic, pesticide-free or homegrown here is the olive oil, salt and pepper. Let’s enjoy it while the summer lasts!

This is just a fancy way of serving something that at first had no name. I