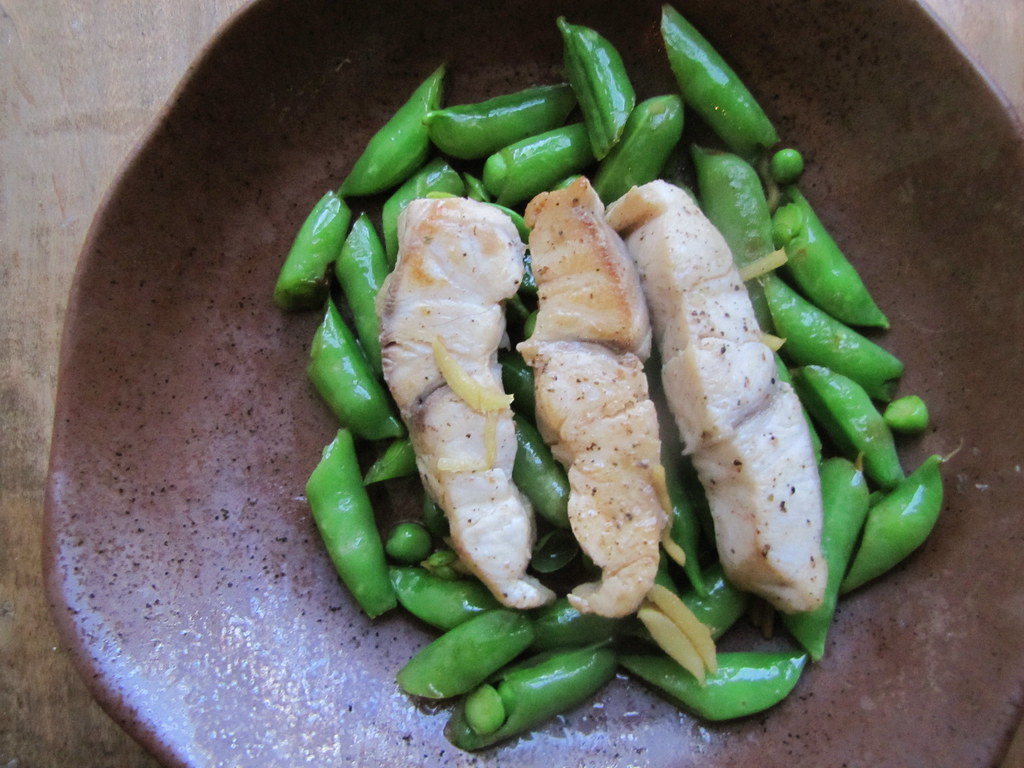 This is just one of those really simple yet satisfying weeknight meals. It took all of three minutes to cook, though that’s not counting the rice you might want to serve it with. It was light and tasty as anything could be. And it’s currently my favorite way to enjoy sugarsnap peas. That’s saying a lot, since snap peas are so good prepared so many different ways.


Sugarsnap peas are also only in season such a short time each year. Though they’re such a beloved spring vegetable, they were only introduced fairly recently, a hybrid between the snow pea and English shelled peas. Like the former, its crisp pod could be eaten; and like the latter parent, its peas were more developed, and sweet. It seems they were specifically engineered to be enjoyed raw, and it’s hard to resist going through a whole bag of them like that. But, like with snow peas, I like these best once they’ve had a quick toss in a hot pan coated with oil. It renders out just a little bit of their moisture, making the pods somewhat thinner and greener. Their texture turns from brittle to crisp-tender. And if you added sliced bits of ginger to that oil, their delicate sweetness will take on a delicious spin. 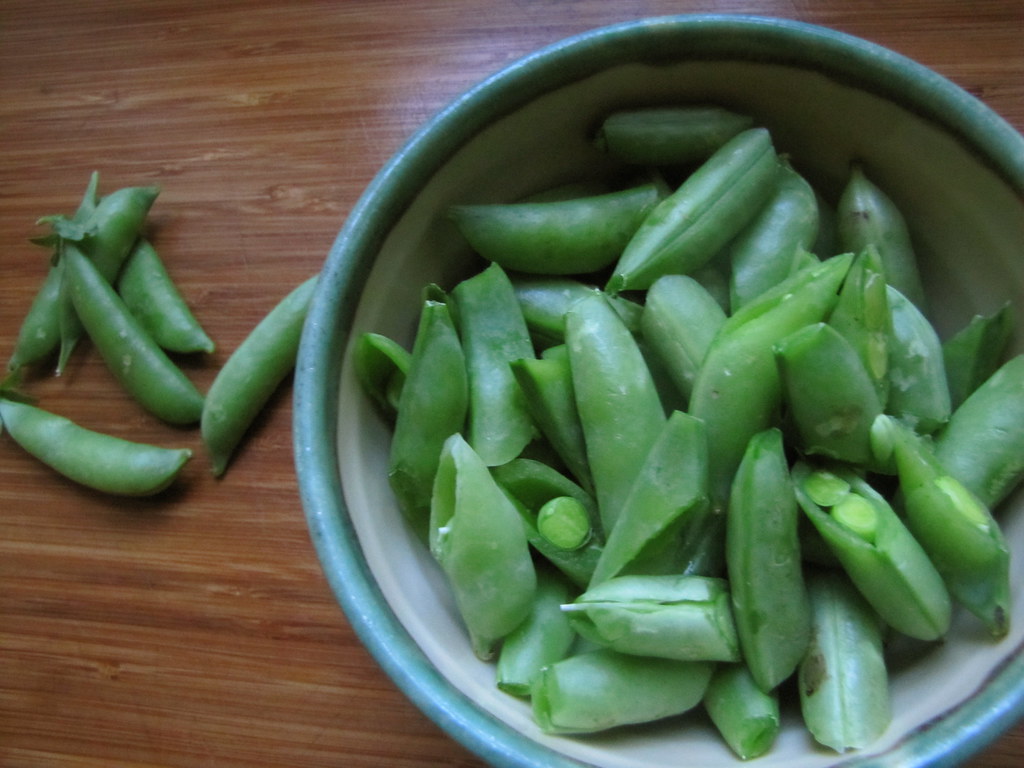 Ginger stir-fried sugarsnap peas is a great side on its own. But a third ingredient helped make it a great meal. Stopping by the Pura Vida fisheries Union Square Greenmarket tent, I eyed the offerings and settled on one fish I hadn’t tried before. “It’s sand shark,” the fisherman replied when I pointed to a tray of fillets. They were extra long, and painted with streaks of bright, tuna red along its mostly pale pink length. What a crazy fish, I thought. It was also pretty cheap, at $6.99/lb for the fully cleaned fillets. As I stood there deliberated on that and my other choices, the folks around me were gulping down clams on the halfshell. Beautiful little clams and oysters were in, fresh and ready to steam, sautee, or shuck-and-slurp. What a fortunate time of year for the home cook.

For some reason, I stood my ground and ordered the offering that first caught my fascination, the sand shark. After bringing it home, I could find no recipes nor culinary advise whatsoever on cooking this type of fish (it probably has several other names). So I went with the simplest solution: lightly marinate it and pan-fry. The fillet was so thick and meaty that I chopped off big chunks from the fillet before seasoning them with salt and pepper and letting it sit in the fridge while prepping the rest of the ingredients. 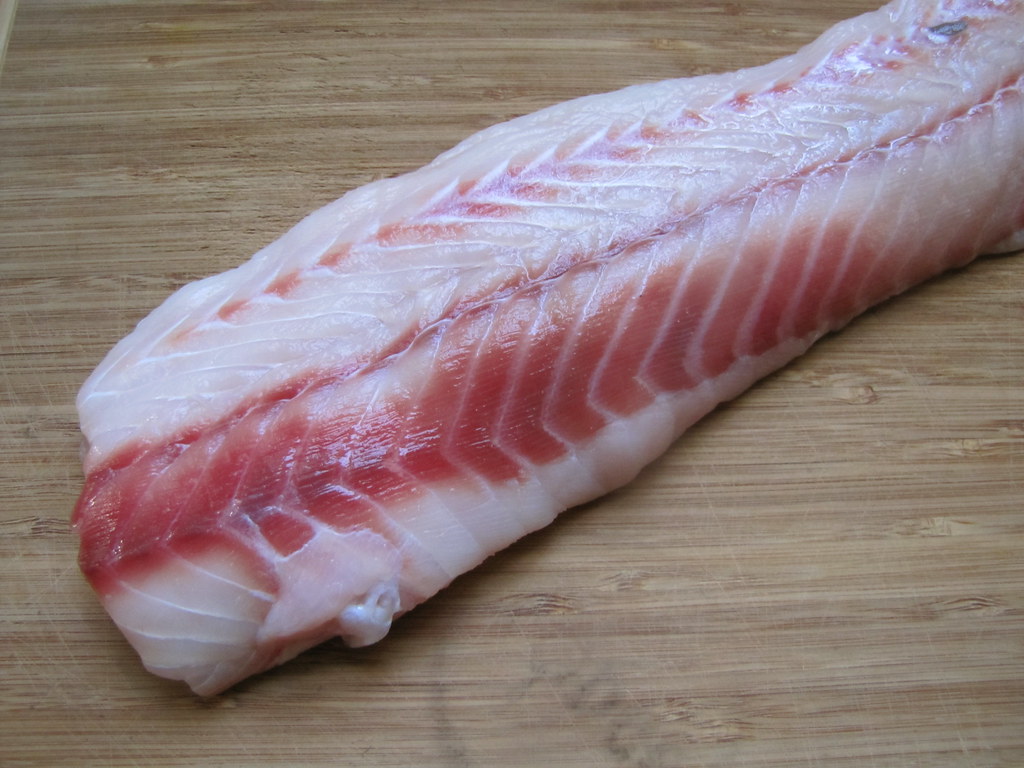 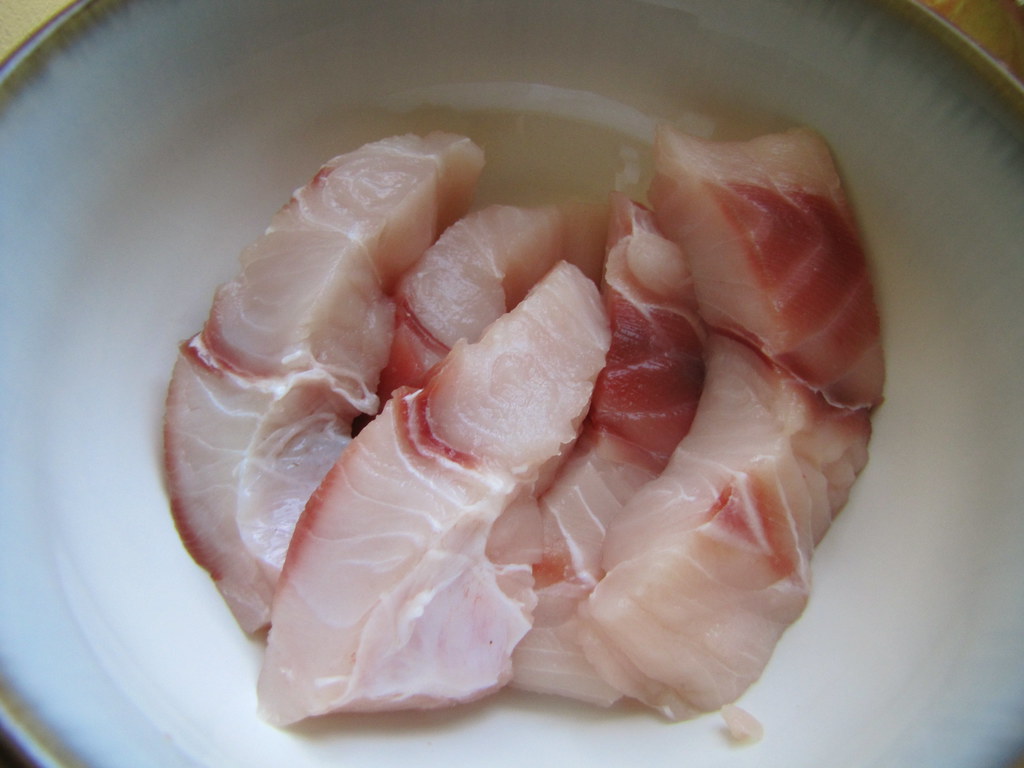 
Lightly browned in a hot pan with oil, for less than a minute on each side, the sand shark pieces were promptly taken out. A quick touch with my finger told me they were mostly cooked through, and had visibly turned opaque from transparent pink. I tasted a bit of one piece that had fallen apart in transit. Next, the sugarsnap peas were tossed in the same pan, along with a generous clump of slivered fresh ginger. About a minute later, the fish were added back in and given a final stir, and a little splash of soy sauce.

This is my type of cooking, which draws its strength from really great ingredients, and not too many of them. You can thoroughly enjoy those snap peas, and you can thoroughly enjoy some really fresh fish. As for the sand shark, it was truly a revelation — it tasted a lot like tuna, or mahi mahi. If you like swordfish, you’re also in for a treat. And it was cooked lightly enough that the center was still a touch raw and pink. Yum.

I’m sure not everyone has access to fresh sand shark wherever they live, so I left the recipe open-ended and encourage you to scout out your favorite local fishmongers for anything that strikes you, or anything that’s recommended and extra-fresh. 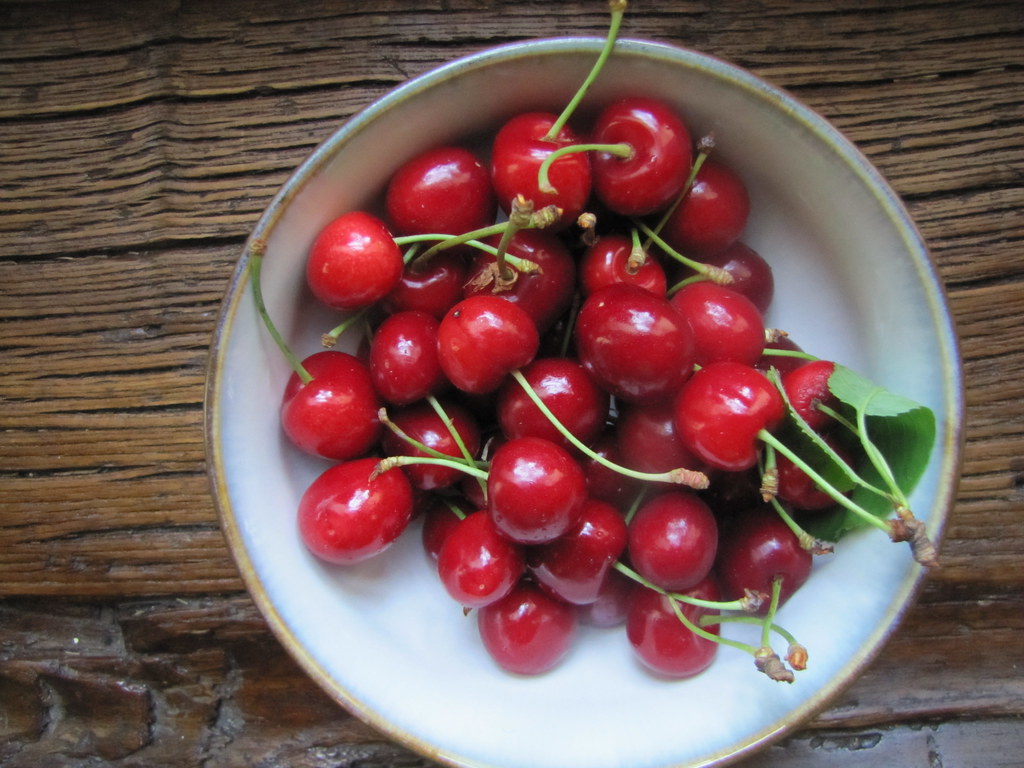 Also, I highly encourage you to scope out some cherries right now. These are from Mignorelli Farm, and they’re fabulous.

Place fish in a bowl and season with salt and pepper. Add a drizzle of oil and mix with hands. Cover and chill while you prepare the rest of the ingredients.

Heat a heavy-bottomed skillet with about a tablespoon of oil. Once hot, place down fish pieces and don’t touch for about 30 seconds. Flip gently and cook on other sides for another 30 seconds to a minute. Remove from pan and transfer to a bowl. Add another drizzle of oil and the ginger to the pan and reduce heat to medium. Add the sugarsnap peas and pinches of salt and pepper and cook, stirring frequently, for 1-2 minutes. Return the fish to the pan, and splash the soy sauce evenly around. Taste for seasoning. Serve immediately with rice optional.

Three brownie points: I think this has to be one of the lightest ways to prepare anything — by quickly stir-frying it in a minimal amount of vegetable oil. When you consider eating the sugarsnap peas and other vegetables fresh in a salad, they can accumulate more oil from dressing than what they do on a pan like this. Sugarsnap peas are fortunately full of Vitamin C and many other vitamins and minerals, like iron and potassium. And while I’m having a hard time tracking down any information as to eating “sand shark,” I’ll simply state that it, like all fish, provides valuable omega-3 fatty acids that are not so often found in foods we commonly eat.

Eight maple leaves: With the exception of the ginger, salt, pepper and oil, this was a local and seasonal meal — or way of preparing two ingredients from the Greenmarket. I actually considered throwing in some heirloom zucchini and summer squash that I’d picked up that day as well. It was exciting to see that some farms had them already for it being so early in the season. But when it came down to it, less just seemed more. The sugarsnap pea and fish combo was just right on its own.