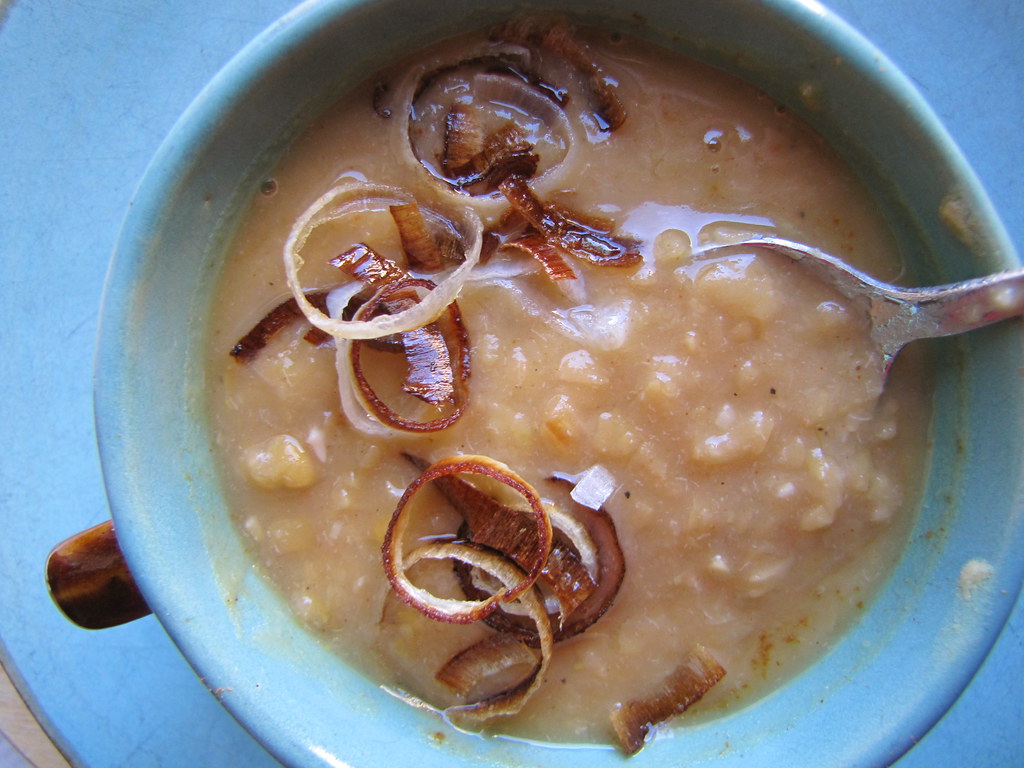 If there’s one thing I learned from the Souperama this weekend, it’s that a big batch of soup is meant to be enjoyed by many. And, okay, sixteen batches of them, even better. But more importantly, I was reminded of this altruistic goal when it comes to cooking anything in large portion (and really, who’s going to make one bowl of soup?): to try to create something that’s kosher for almost any diet, sway or fancy, and still make it delicious for all. It can also be a fun creative challenge. And for someone who happens to have a handful of vegetarian friends, making split pea soup without ham sounded like a challenge, indeed.


Or maybe I just didn’t have a ham bone handy. In any case, I didn’t miss it with this version. It started with coming across a packet of daffodil-yellow split peas, from an Amish food market vendor on a quick trip to Philly. What are split peas, anyway? Simply, and whether yellow or green, they’re dried, round peas that have been shelled of its thin skin, so that they naturally split into half-orbs. They’re full of protein, like beans, as well as starches that help thicken liquid it’s simmered in, so it’s a natural choice for a hearty soup that nourishes without the help of meat. 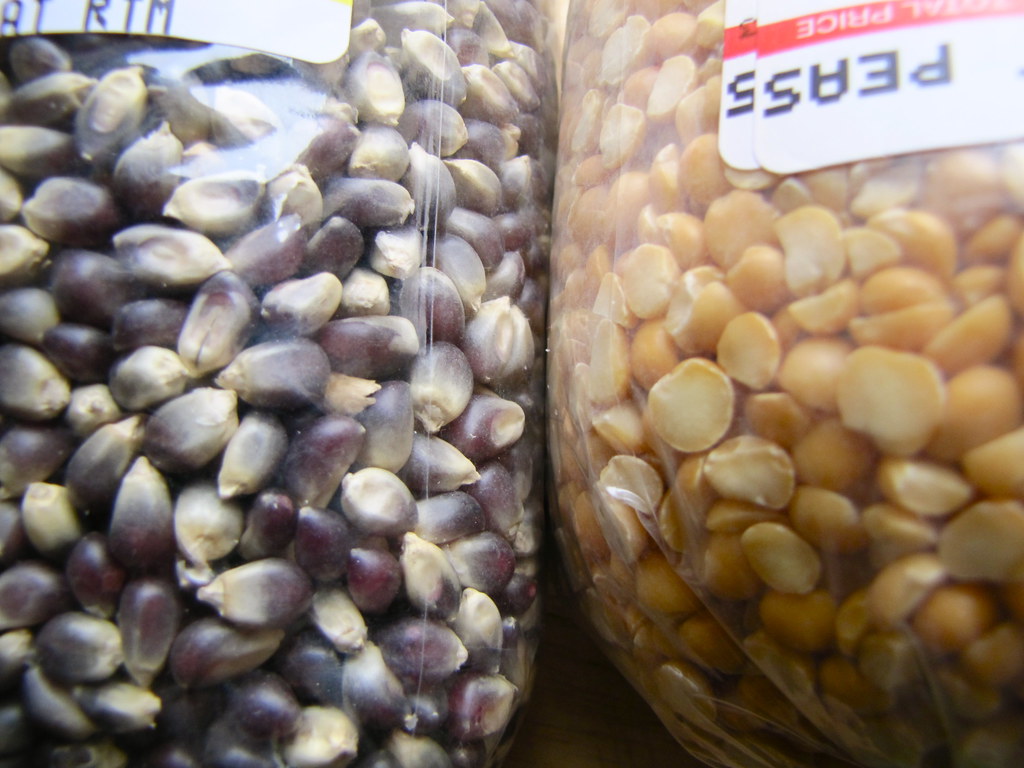 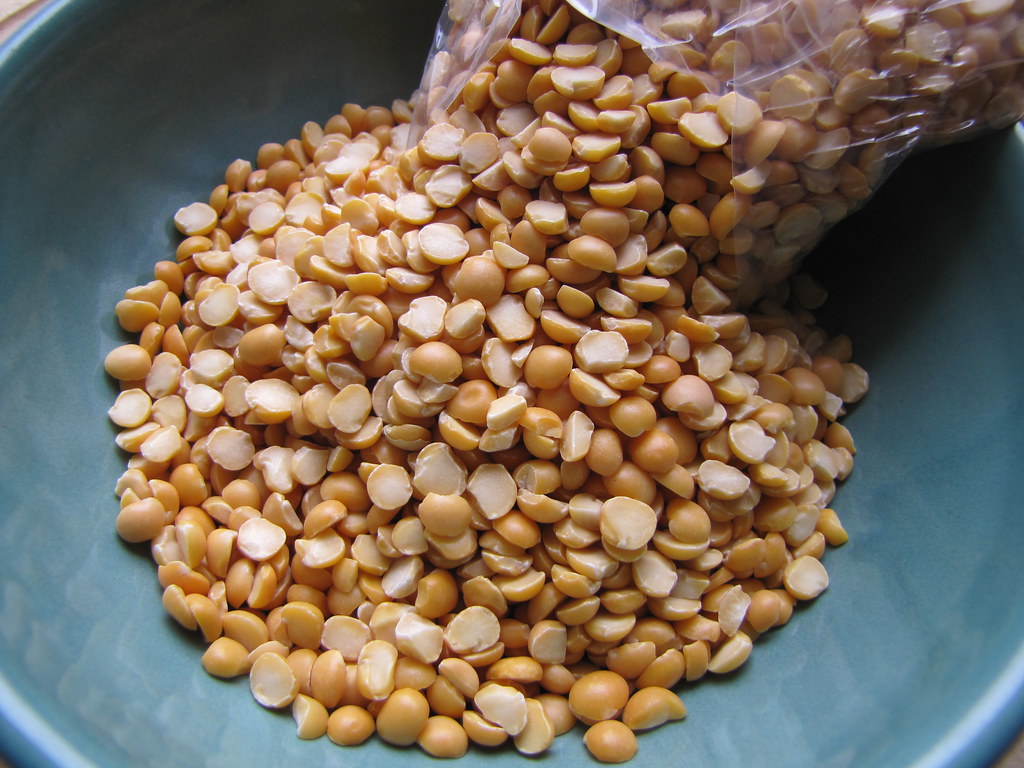 
But we’ll miss that smoky aroma that simmering a pot of these with ham makes. So I added some smoked paprika to the otherwise simple spices. Using some vegetable stock that was homemade the same night the peas were let to soak (with parsnips, carrots, celery, onion and turnip), and a bunch of leeks just because they looked so fresh and springlike at the Greenmarket, this soup was done in a cinch. That is, if you count a couple hours of letting it simmer while you do other things. 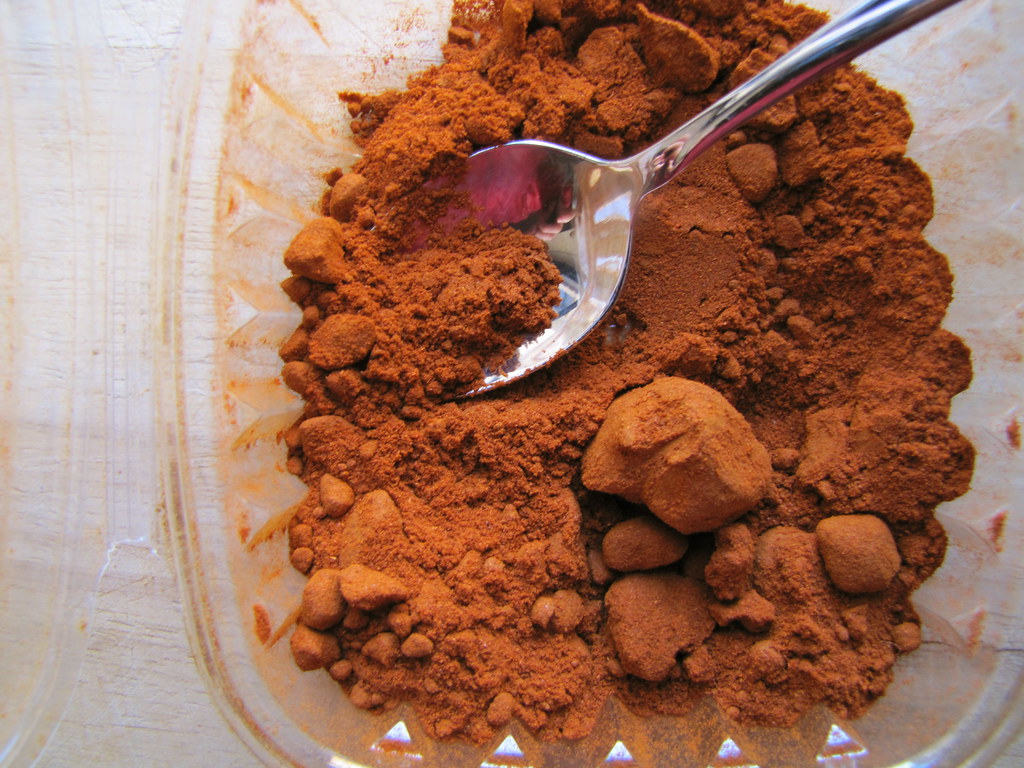 While talking to one contestant at the Souperama on Saturday, Patricia Clark, about her ribollita, she explained how the traditional Italian peasant soup was meant to be simmered over the course of many hours, a few days even, as the cook went about their business, maybe adding extra ingredients such as leafy greens or leftover rice as he or she wound up with them. It was passive soup-making, but it made for layers of depth in the end. This philosophy seems fitting for the busy urbanite, too, and as it turned out, I would leave my pot of split pea soup simmering intermittently throughout the weekend, as I went about my business entertaining houseguests from out of town. I hope that tonight, we’ll all get to enjoy the fruits of my non-labor together, before they take off.

I was also influenced by second-place Souperama winner (and three-way tie for first place winner in the audience vote) Karol Lu’s slightly smoky roasted sweet potato and parsnip soup that day. She had used pureed chipotles in adobo sauce as the secret ingredient to making her soup wildly delicious, while still playing a fully vegetarian card. I suppose we share some common ideals when it comes to cooking, because over chatting, Karol said it was her goal to win over possibly vegetarian and meat-eating voters in one pot, and making the best of local, seasonal produce. She had even made crispy, roasted parsnip chips for garnish that looked a lot like Bac-Os. (Since I still had leeks from making this soup, I roasted these for my crispy topping.) 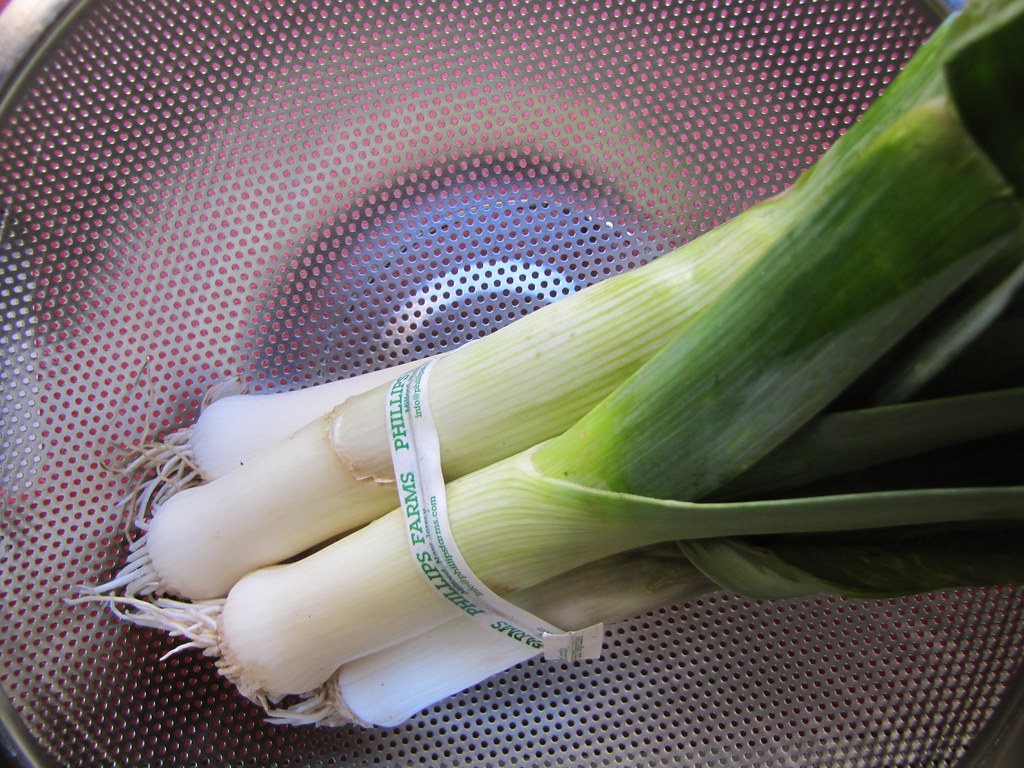 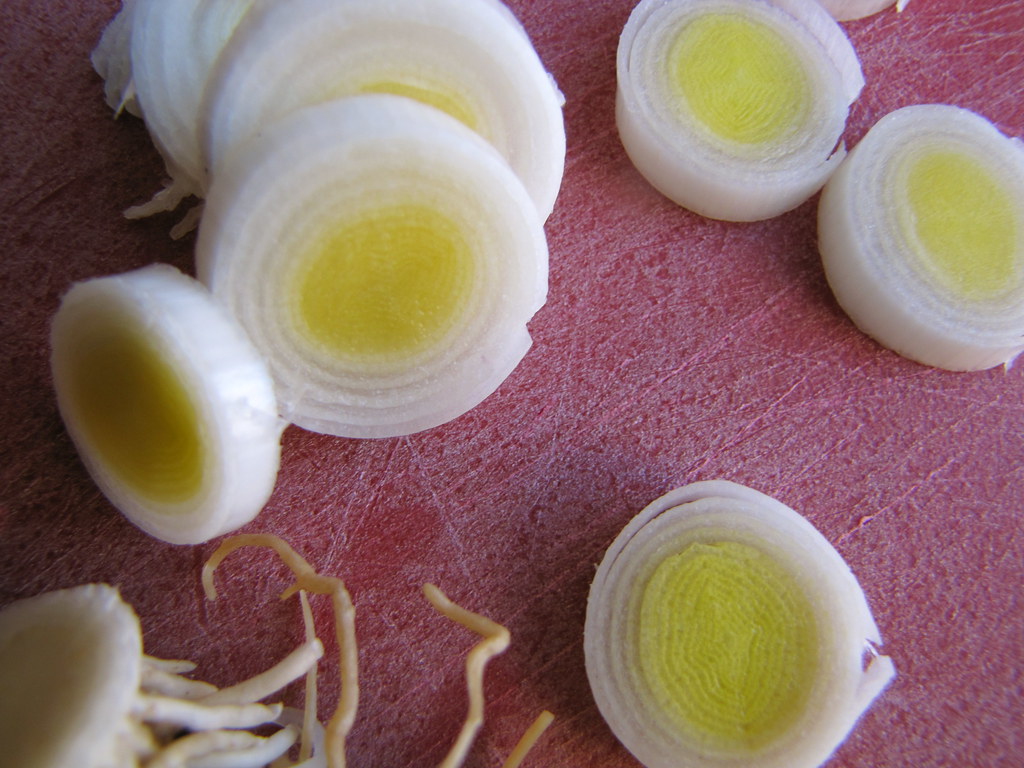 slicing the leeks for a quick roast and crisp garnish

The whole results of the Souperama, and some great photos, can all be found here thanks to Metromix. Big applause to the first-place winner of the day — Sam Mason! Though not the famously inked chef you might think. This Sam hails from New Mexico and had used the last of his precious, frozen batch of the state’s famous green chiles from last summer in his creamy chicken corn chowder. Bravo. And for the record, we were all fooled at first by the name.

And on random note, for anyone who might have read The Art of Eating In already, Karol is the same one of many a mention in the book. And my out-of-town guests? Jordan and “Dan,” who are now married and live in Australia.

In a large, heavy-bottomed pot, heat 2 tablespoons of the olive oil and add the finely chopped leeks. Season with salt and pepper. Cook, stirring occasionally, over medium-low heat until softened, about 6 minutes. Add the garlic and cook another minute. Add the smoked paprika and stir to combine evenly. Add the soaked and drained split peas, vegetable stock, bay leaf and bouquet garni. Bring to a boil, and reduce heat to a low simmer. Simmer, covered for at least 2 hours (this can be done over the course of however long it takes, starting and stopping, leaving and coming back), or until desired consistency and once peas are tender and have mostly broken down. Add the lemon juice and season with salt and pepper to taste. Remove the bay leaf and bouquet garni.

For the crisped leek topping: Preheat oven to 375 degrees. Coat the round slices of one leek with olive oil and place down evenly spaced on a roasting tray. Sprinkle with salt. Bake about 15 minutes, checking after 10 minutes. Once leeks are slightly browned all over, remove from oven and let cool. Garnish individual soup dishes with the crisped leeks.

Two brownie points: Quite an accomplishment for such a savory dish, this one has almost no fat. Sure, you can add butter for a little richness at the end if you wish, or drizzle your bowl with extra olive oil. But the crispy leek topping seems satisfying enough alone. Not only protein, but split peas are really big on fiber, in a really big way, and that’s not common in too many foods. It’s also a great source of folate, B-vitamins and potassium, and have, like this soup, hardly any fat.

Seven brownie points: While it isn’t labeled “organic” or pesticide-free, the Amish farmers whom I bought these peas from took obvious pride in their crops, from the way they talked up these split peas they were selling. I can be sure they didn’t travel too far, from Lancaster County to Philly’s Reading Terminal Market, and furthermore, I understand that these folks really carpool to get there, but that’s another thing altogether. The other ingredients beside dried spices were mostly organic Greenmarket finds: the leeks, garlic, and vegetables that were in the stock. Only the lemon stands alone as non-local produce.