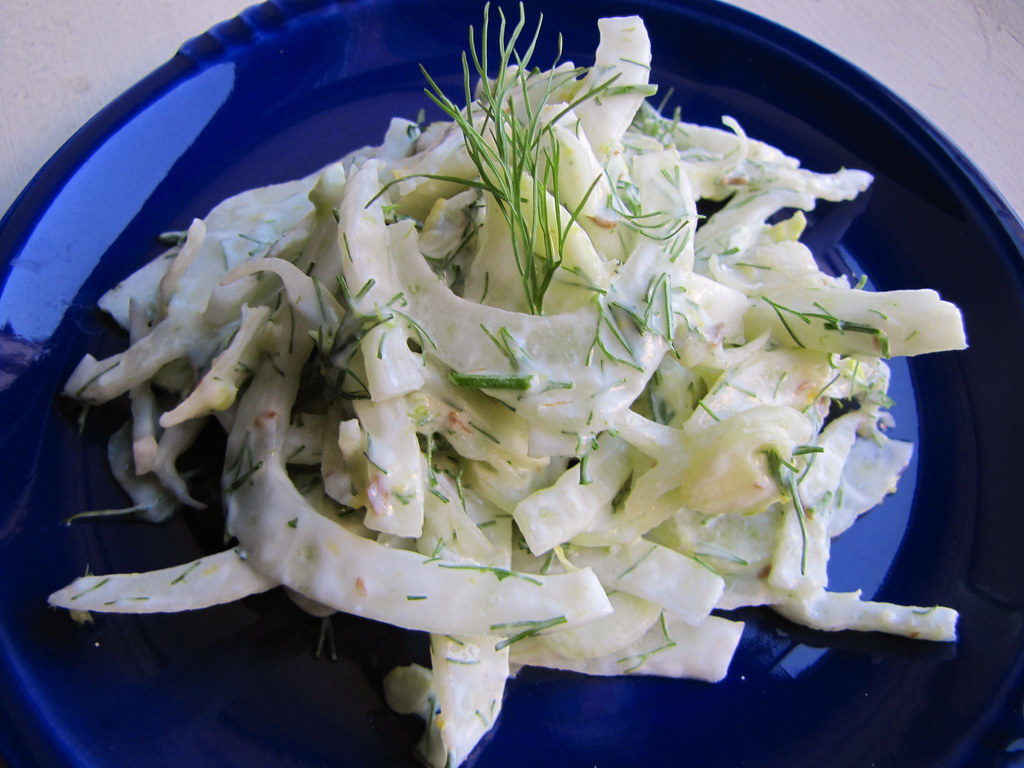 There are so many things you can do with fennel, that I don’t know where to begin. Slivered and sauteed just like onions creates a caramelized, anise-tasting substitute in a savory beef stew. You can lop off the stalks, which most people sadly don’t use, and chop them up like celery to use instead of that, in soup and stock. The fronds are mild-tasting, but they make a distinct, sweet garnish that makes me wonder why I haven’t steeped them in milk for ice cream, or dried some of the stuff up for tea. But before we get to those things, here’s the most basic, popular way to enjoy fennel: slicing the bulb for a crunchy, refreshing salad.

Fennel is not in season in this region at least (the Northeast), but my fridge lately knows no boundaries. People have been coming and going, leaving traces of foodstuff behind, and I’m not at all going to complain. A reporter for the New York Post decided to bring along a load of extra vegetables for a photo shoot in my home, to prop with and such, and we divvied up the contents afterward. I feel quite accomplished for convincing her take home the beets, which she hesitated about because she didn’t think she knew how to cook them. She really didn’t want to take the fennel, though, but that was fine with me. 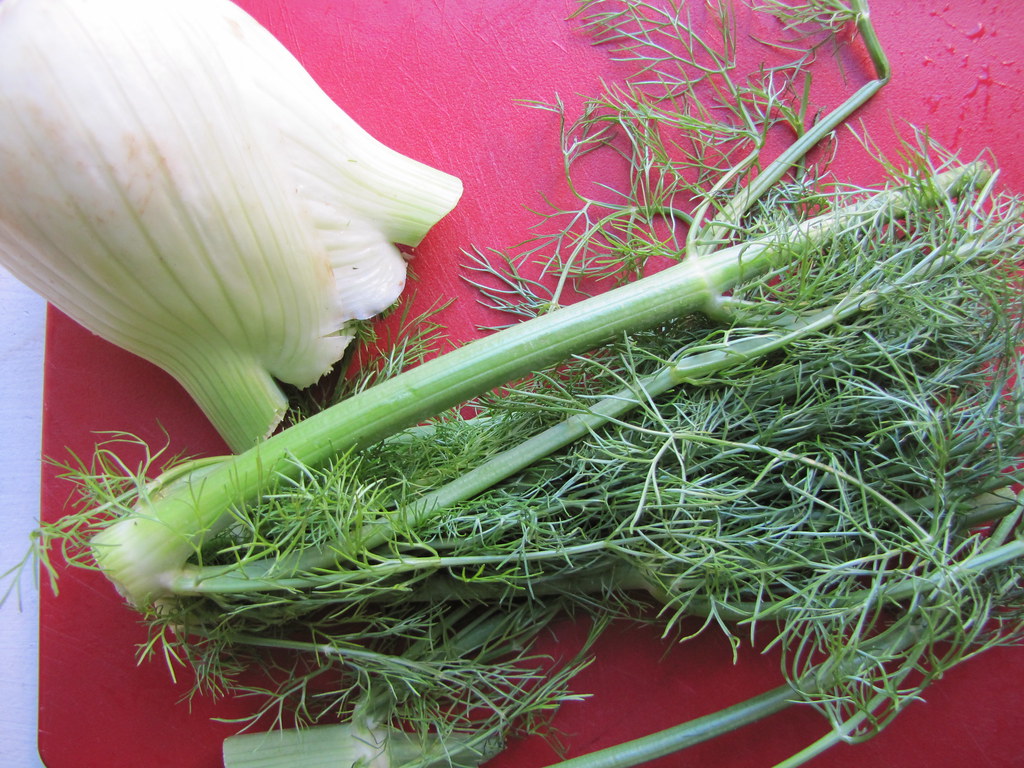 fennel bulb (left) and its stalks and fronds

I had just the dish in mind for it. This creamy slaw-like salad is simple to whip up, but it has just enough nuance to make it really stand out. It’s tart, sweet and licorice-hinted, thanks to the natural flavor of the fennel bulb. A drop of honey gives it a little more roundness while sweetening the deal for me. It’s totally delish, and it’s what I packed in my lunch tote my first day of eating in for a week. But I didn’t invent this dish, at least not in its entirety. I’m not sure if any one person did, and this is just how some of the best foods come about, it seems: by a collaborative effort, between two or more minds, and nature’s offerings.

A few weeks back, I held an “Aphrodisiac” singles-friendly dinner at Jimmy’s No. 43, and collaborated with the head chef there, Aaron, on the menu. It would be filled with mood-enducing, heartbeat-enhancing, stimulating foods that are thought to be aphrodisiac. And fennel is one. The menu was also inspired by an epic dinner party that I hosted for a number of single friends in my home, which is recalled in The Art of Eating In. Working with Aaron, we agreed on adding crushed cumin and coriander seeds to this salad, and giving it some creaminess with creme fraiche, or yogurt. I’d originally thought to add lemon juice and grated zest, from normal lemons, but he suggested Meyer lemon, and adding its sectioned wedges right in.

I’d never imagined this salad would be a serious contender for the best course of the night. But most of us agreed it was well up there. It may not have gotten anyone lucky with its aphrodisiac charms (at least, as far as I know) — and perhaps the curse of the all-too-elaborate feast had struck us again, because at the first aphrodisiac dinner at my home, there was no romance to speak of then, either. The best laid plans… 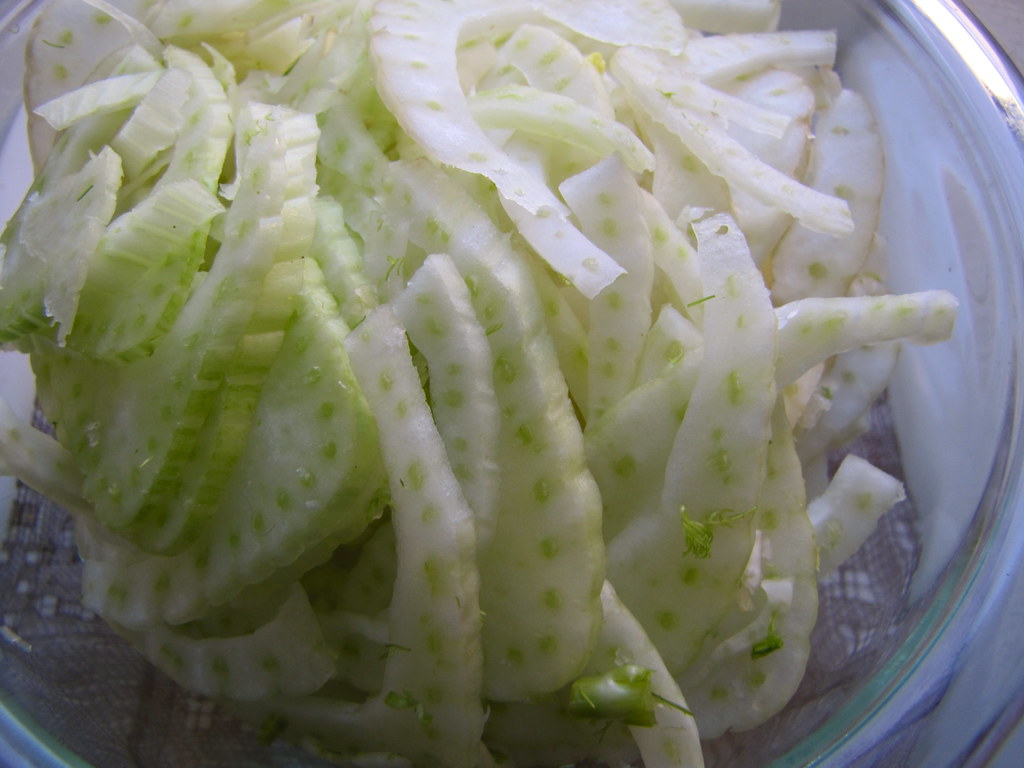 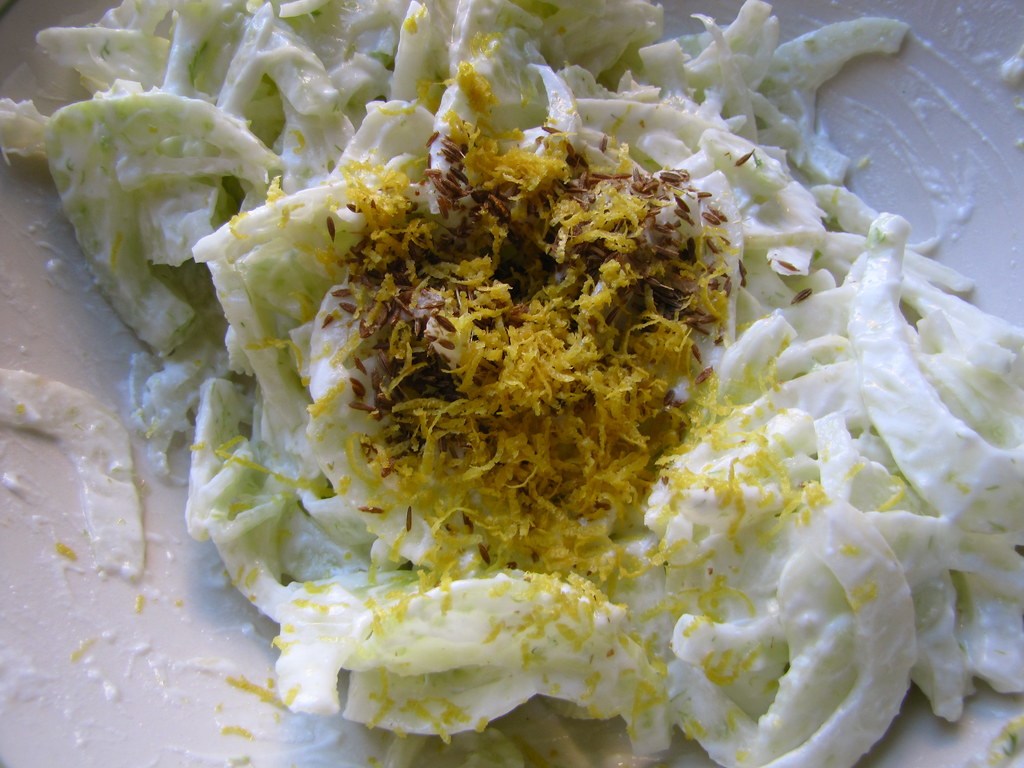 the fennel bulb is sliced, and spiced with cumin and lemon zest

So I wouldn’t chalk it up to chemical influence, but this crisp fennel salad is good to eat, and good to keep, a night before in the fridge, too. It was also the simplest course of the meal to prepare (although I bloodied my fingers and knuckles pretty well from slicing the fennel on a damned mandoline). But forget that death trap of a device — when you’re not cooking for twenty or more, using a plain old, good knife always works. The control is superior, and your finesse at slicing finely is something you can actually practice, when you do it this way. 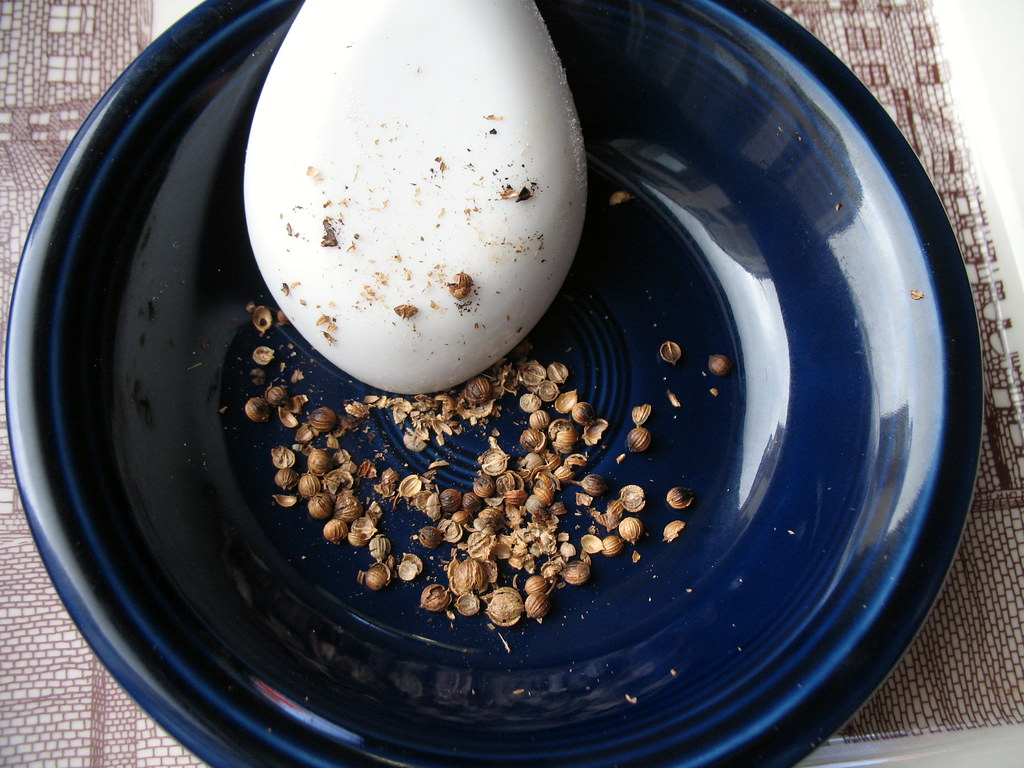 if you don’t have a spice grinder, you can always crush coriander with a Chinese soup spoon

Recreating this salad at home a couple times, I’ve tried it once with yogurt instead of creme fraiche, and it was an okay, not-great substitute for the more luxurious ingredient. I also tried it with and without Meyer lemon, though in each case, I didn’t have the time to diligently cut away sections of the citrus, so just squeezed some juice and called it a day. If you can’t find Meyer lemons (it’s the right season to find them in specialty food stores), understandable. Just add some lemon juice and zest. But I wouldn’t try to throw in the sections of a regular lemon. Meyer lemons have an almost tangerine-like sweetness to them; they’re much less sour and won’t cause your cheeks to suck in. Since fresh fennel fronds are within easy reach when working with the ingredient, a handful chopped up add a nice, feathery garnish to sprinkle on at the end.

Combine the creme fraiche, honey, salt, lemon zest, cumin and coriander in a large bowl. Fold in the fennel and Meyer lemon slices until evenly coated. Add the fennel fronds and toss once more. Serve immediately or chill up to 1 night, covered.

Four brownie points: Fennel is a fibrous plant, its stalks and bulb, and by that, I mean it has fiber, too — and folate, potassium and Vitamin C. It’s pretty low in sugars and calories, and not as high in natural sodium as celery, a similar-looking plant. Add to it a dollop of creme fraiche, and you’ve just got your cholesterol, but a bit of calcium, too. All told, this is an oddly rich yet refreshing salad, but one that should satisfy in a few dainty mouthfuls.

Four maple leaves: Not looking so good. While you can pat yourself on the back for using up all parts of a plant like the fennel (in this one dish both fronds and bulb), it’s not in season, locally. But so few things are right now. The creme fraiche and yogurt I used for this dish were both organic and hormone-free kinds, though neither were terribly local, artisanal nor amazing; something to seek out for next time, perhaps.