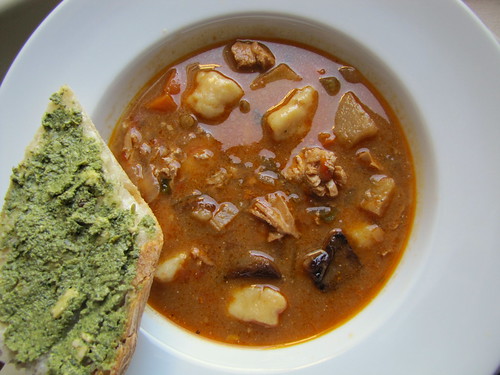 I’m back in the States just in time for the most American holiday of them all: Thanksgiving! Where’d I go? Please forgive the week-long break from blogging — I took off in a rush for Australia, to attend a very important friend (VIF) Jordan’s wedding in Melbourne. It was a blast. But now I’m ready to cook a grand Thanksgiving feast… another one, that is. Shortly beforehand, I got together with Rebecca and Max from Working Class Foodies for a great round of recipes all made from typical Thanksgiving spread leftovers. Here’s what they shot! And below, more on what we made.


Rebecca and Max have done a great job so far cooking with Working Class Foodies, their online TV show featuring many of those folks around the city. If you haven’t checked out any episodes yet, I highly recommend. They’re quick, informative and most of all, really friendly. There’s one with Theo Peck, cook-off contestant turned co-founder of the Brooklyn Food Experiments. There’s tips on everything from breakfast when there’s no eggs in the house, to touring the Greenmarket for a simple yet stunning salad. I was thrilled to have them over at my apartment to fool around with some Thanksgiving leftovers for my video’s theme.

There’s nothing wrong with doing a straightforward redux of everything from the Thanksgiving table, the next day. But perhaps you, like me, have grown a bit tired of this routine, and not just for the soporific effect that turkey tends to lend. So I decided to spice up the leftovers for a thoroughly different day-after Thanksgiving meal. One that won’t remind you of all the calories you consumed the day before, in such precise detail. I came up with the following meal, one that’s easy to replicate as well as reinvent with whatever your leftovers happen to include:

For the soup, we sauteed a mirepoix of onion, carrot and celery, and gave it a few heaping tablespoons of Hungarian paprika as it sizzled. This was the starter for the goulash-inspired soup. We added canned stewed tomatoes (regarding the scene in which a can is opened with a knife: I do have a can opener… somewhere. Alas, it was not to be found during the shoot, and like the video says, I wouldn’t recommend trying that method at home), white wine, homemade roasted red peppers and the leftover turkey carcass to make a soup broth. Leftover turkey gravy from the Thanksgiving table went in to help thicken the soup, as well as add flavor. I’ll admit that in the video, I think I added a bit too much water (in attempt to cover the turkey carcass I’d shoved into the pot — it was humongous) to that pot. I would have liked the broth to have been a little thicker, but compensated for that by making sure it had plenty of chunks. You can add chicken or turkey stock instead of water and a carcass, or make broth from the carcass separately, in a big stockpot. Or you can simply toss in some stray bones, legs and wings to the soup, especially if you’re making a smaller batch. And because Rebecca and Max had some leftover roasted root vegetables, we sunk those into the soup after it had simmered for about an hour, and gave the leftover bits of meat a rough chop to keep in the mix, too. 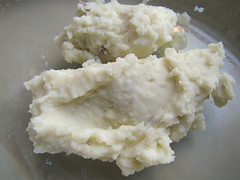 Next, we added some potato dumplings. Continuing this soup’s Eastern European theme, I thought potato dumplings would make a suitably filling filler for the goulash-inspired soup. Only these weren’t dumplings in the sense that they had mashed potatoes stuffed inside. They were more like potato gnocci — mashed potatoes, mixed with flour. More or less following the same procedure for my recent sweet potato gnocci recipe, I swapped in leftover mashed potatoes, which had already been typically seasoned with salt, pepper, butter and milk. It was also a little on the chunky side. No matter — these dumplings worked out just fine. One trick I would suggest though, is heating up the mashed potatoes before you begin adding the flour, to get them back to their more fluid state rather than them being a solid rock from the refrigerator. Once the flour and mashed potatoes reached a dough-like consistency in a bowl, I rolled these onto a floured cutting board, and cut them up. They were tossed into the soup while it was at a roiling boil, and cooked quickly. The soup was finished by stirring in some sour cream, another Hungarian goulash trait.

Yes, Rebecca, Max and I all had plenty of leftover turkey soup at the end of the day. I still have a couple quarts in the freezer. Moving on, we played around with another typical Thanksgiving leftover: green beans. I love green beans sauteed with garlic, perfectly seasoned and crisp-tender. But I don’t love them as much the next day. They’re never be crisp-tender again, more like sodden-wrinkly, and this just makes your leftover meal look a little sad. So we mashed them up in a food processor along with basil, walnuts, olive oil and a bit of fresh garlic. Presto! Green bean pesto it became. We spread this on slices of bread to make sandwiches with the leftover white turkey meat (and more roasted red peppers). 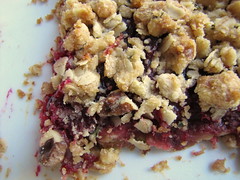 After gorging on these for a while, we went back to the cutting board to mince up some leftover rosemary. I don’t know about you, but I always have leftover herbs after Thanksgiving, and rosemary’s a pretty common one. Fresh herbs tend to go bad quickly, so it’s a good reason to sneak them into foods you might not normally think to. Like dessert. With a tub of leftover cranberry sauce, we made a simple fruit crumble with a buttery oat and rosemary-flecked crust. The recipe for this was really as easy as it looks on the video: equal parts flour and rolled oats, some brown sugar, rosemary and butter for the crust. Fold it together, and spread half the mixture in the bottom of a casserole. Spread an even layer of the leftover cranberry sauce (as long as it’s a jellylike consistency — cook yours down or thin it out with water if need be), and top the two layers with a sprinkling of the remaining crust crumbles. After that happenstance union, I’d have to say that cranberry and rosemary might be my latest favorite flavor combination.

So whatever you’re making for Thanksgiving, know that your lazy Friday meal can still be unique. What about a turkey pot pie, with chopped turkey meat, leftover veggies and gravy for a quick sauce inside pastry? Or soup that’s not spiced Eastern European-style? Leftover Brussels sprouts pesto? Hey, I’m not too sure about that one, but let me know how it tastes if you give that a try.