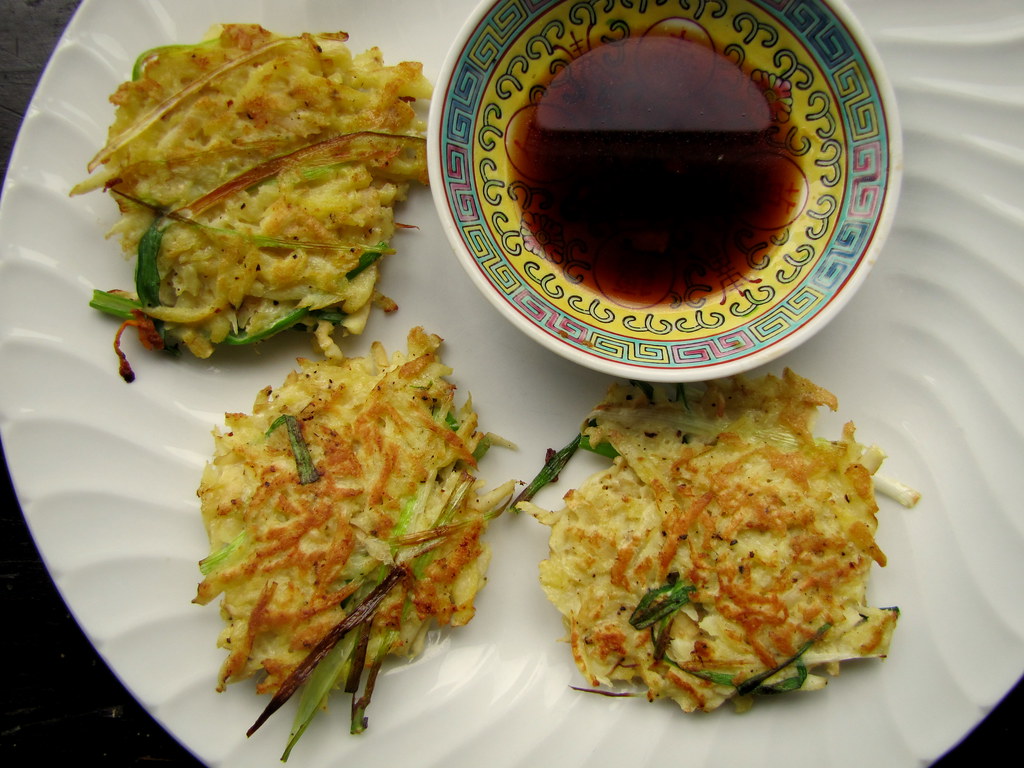 Good morning, turkey-filled, shop-till-you-dropped long weekenders! Wake up and smell the sizzling parsnips. (It’s a really good smell.) It’s a good week for simple, seasonal cooking. But that doesn’t mean the food has to be boring or predictable.

So we already went through a slew of recipes that you can make with Thanksgiving leftovers with Working Class Foodies (and yes, I now have another picked-at carcass to play around with). But this year I overshot the amount of parsnips I’d need for the roasted vegetable platter at my family’s dinner, and was left with a few spindly stragglers. Parsnips are a singular member of the root vegetable family. They look like off-white carrots, but they’re much more fibrous and starchy, and have a more grizzled appearance, with deep creases, scuffs and stringy hairs that are surprisingly tough. When they were chopped and roasted in a 400-degree oven along with carrots, turnips, rutabaga and shallots, they were the hardiest vegetable of the bunch, taking the longest time to cook through and brown on the edges. While the other root vegetables shriveled into sharp, concentrated nuggets as their liquids evaporated, the parsnips retained the most meat for the cooking time; I also detected a banana-like sweetness in the mushy centers once roasted. 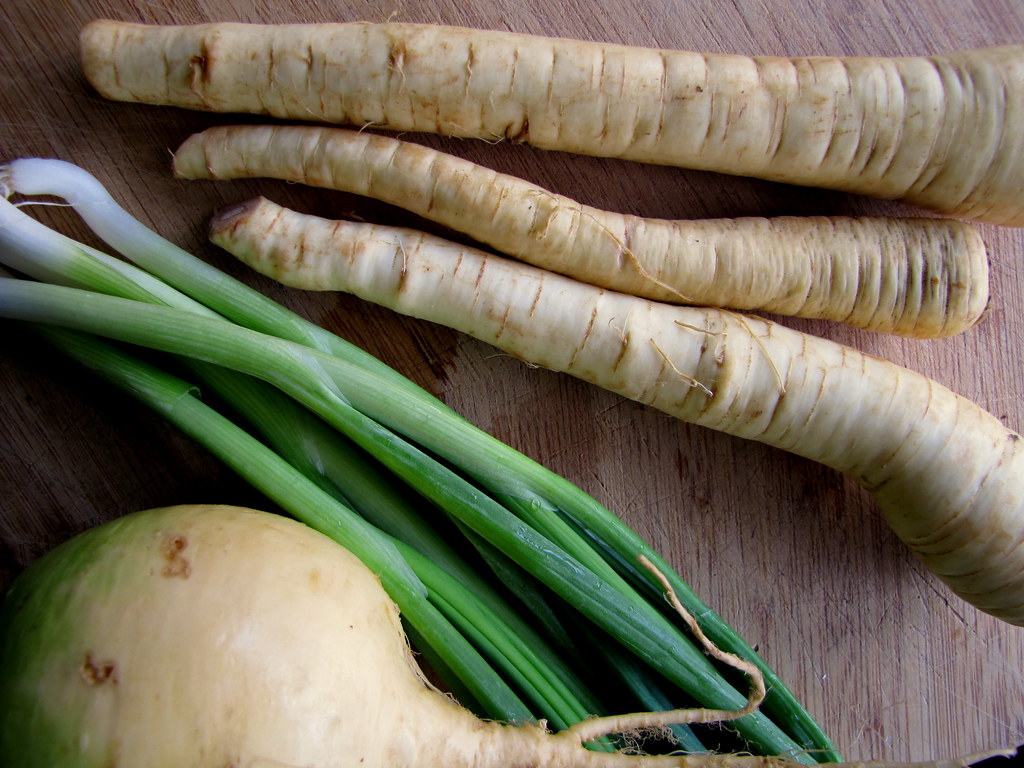 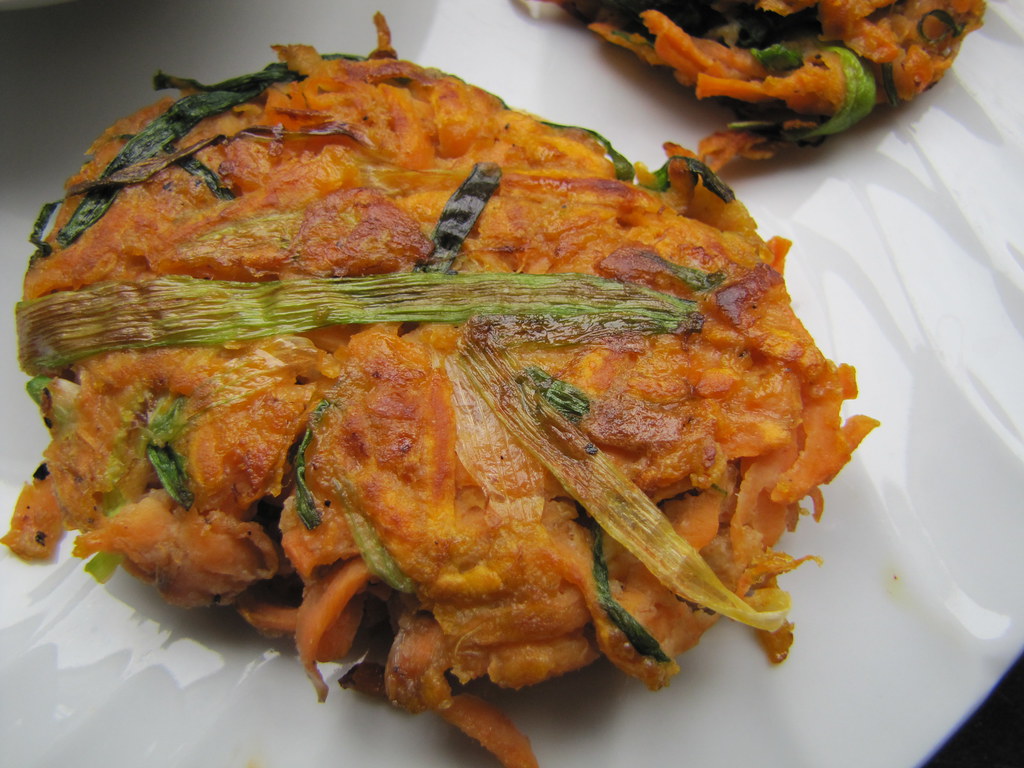 the sweet potato version, from a day before

In addition to the roasted root vegetable dish, I’d made an appetizer of shredded sweet potato pancakes at Thanksgiving. These had only sweet potatoes, thinly sliced scallions, salt, pepper and egg to bind it all together. I’d borrowed the recipe from Jui, who led the soup kitchen meal we cooked a couple months ago in honor of the Souperdouper Soup Kitchen Cook-Off, and had come up with potato pancakes made with purple fingerlings and scallions. Her version involved nearly deep-frying the pancakes in a skillet of oil. With sweet potatoes instead, at my Thanksgiving, these had a pleasing sweet-savory contrast and a slightly looser, less crispy construction. Once pan-fried on both sides, I decided that the pancakes could probably use a sauce for serving. But no apples had been spared from the last night’s pie-making session to make the classic accompaniment for potato pancakes, applesauce. So on impulse, I went for the soy sauce and rice vinegar and served them with that instead — the classic accompaniment for Chinese scallion pancakes.

These were such a hit at the before-dinner table that the next morning I thought it wouldn’t hurt to try them out with the leftover parsnips. Not only was the parsnip variation uniquely tasty (that sweet, banana-like flavor), but the pancakes actually held together a whole lot better. The patties might not form very easily when raw, but something magical happens after about two minutes of sitting on a hot pan: the shreds begin to bond, glued by their own natural starches more so than the egg, and once it’s time to flip, it’s definitely one conjoined cake. Hence, it was much easier to flip these than it was for the sweet potato pancakes. 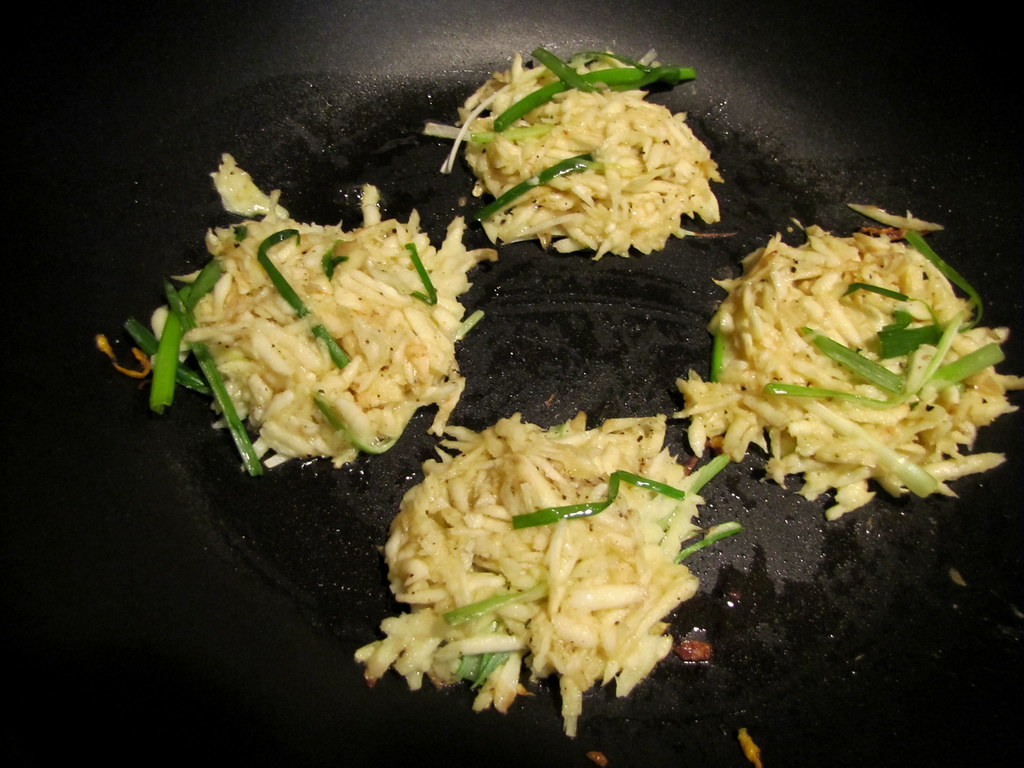 sizzling on the pan 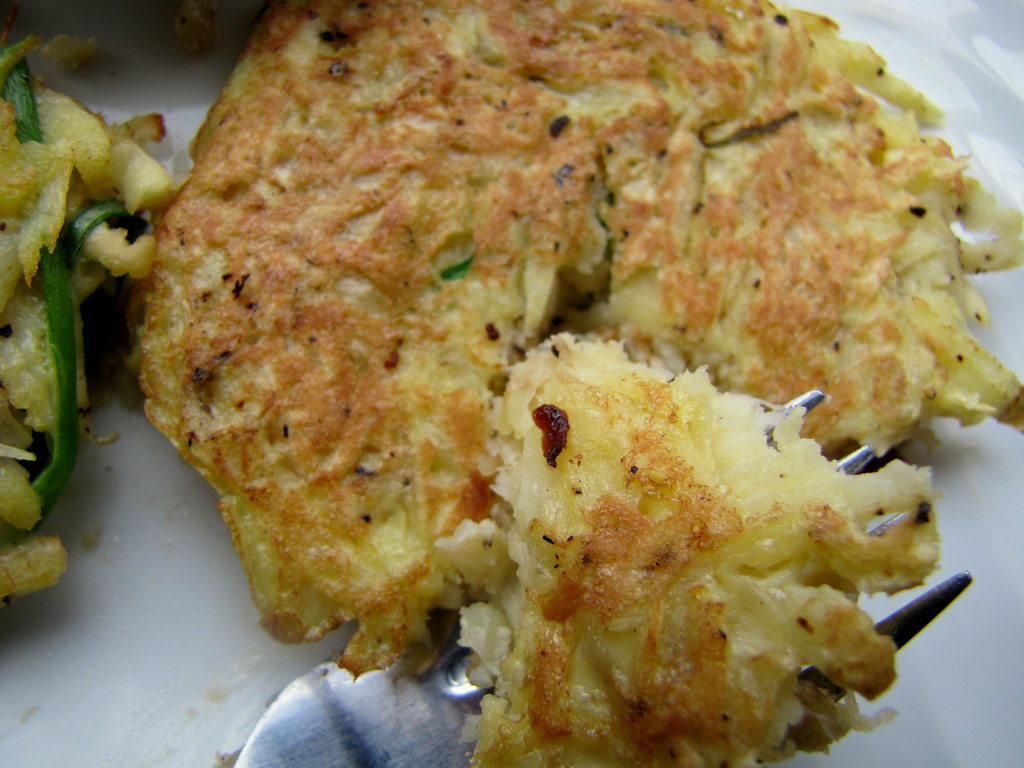 As luck had it, my tasters approved of the new variation as well. To my surprise, they enjoyed the parsnips even better than the sweet potato version, and commented on how the pancakes stayed together so well, easier to eat with a fork. Trust me, this was a group of parsnip non-believers I was serving to. My mom in particular was skeptical about the unsightly root veggie. And truth be told, I wasn’t sure how much I’d like the taste of them from the beginning — I was just trying to use up the stray parsnips in the fridge. Funny how sometimes, leftover dishes can trump the original.

Beat the egg in a medium-large bowl and combine with the rest of the ingredients except for the oi and the dipping sauce. Heat a tablespoon of oil on a skillet over a medium flame until hot. Using your hands, form the parsnip mixture into roughly 3-inch patties at a time, and place gently onto the pan, keeping each pancake an inch or so apart (you will probably need to work in batches). Cook for 2-3 minutes on the first side before flipping; flip, and cook another 2-3 minutes or until lightly browned on both sides. Remove from heat and serve with the optional dipping sauce immediately.

Four brownie points: (Four brownie points is my goal for “healthy recipes this fall/winter season, easing out of summer’s excess of fresh fruits and veggies and into winter’s hearty classics… but I digress.) Parsnips are a terrific substitute for potatoes, not only because they are so tasty, but because they have considerably less calories than potatoes, and more fiber, potassium and Vitamin C. This is a delightful way to serve them if the only way you’ve seen parsnips have been in richer applications, like in a cream soup, or creamy puree, or a creamy, buttery pasta or some sort.

Eight maple leaves: Nothing to hide here. There are only two main ingredients in this dish — parsnips and scallions — and both can be found from local, organic and/or sustainable-minded farms at the markets this time of year easily. As well as eggs, which goes into this recipe, too. It doesn’t get much simpler than this.