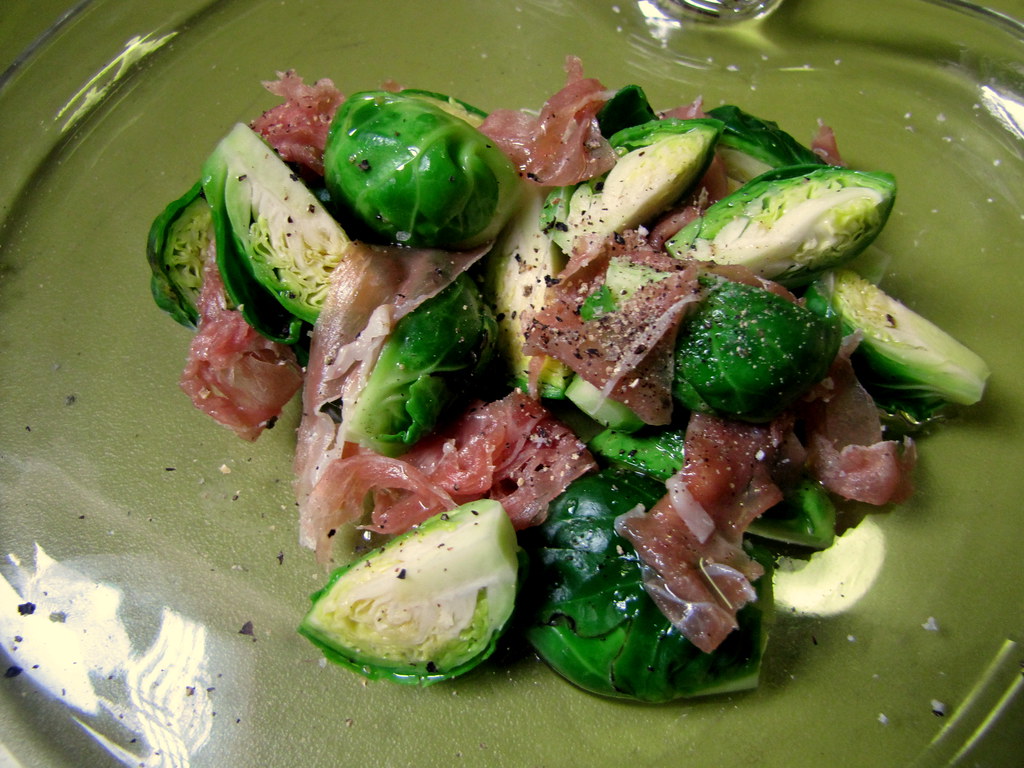 Few vegetables have come such a long way in public opinion in my lifetime as the Brussels sprout. As a kid, it was one of the most despised foods one could deign to eat, grown-up or not. Now, twenty years or so later, it accompanies chops and half-chickens on so many restaurant plates, and at a recent Thanksgiving-themed potluck dinner, it was the first vegetable side to be cleared up by the crowd (while the broccoli, another not-so-kid-approved food, was one of the last).


But I always see them prepared the same way nowadays: sliced and cooked to caramelized, near crispy half-orbs of greenish brown. This, to be sure, has suited me just fine, and is probably the way I’ll serve them at Thanksgiving proper. But while they’re in season — since they’re in season — it’s been fun giving the diminutive cabbages a couple of very different encores. 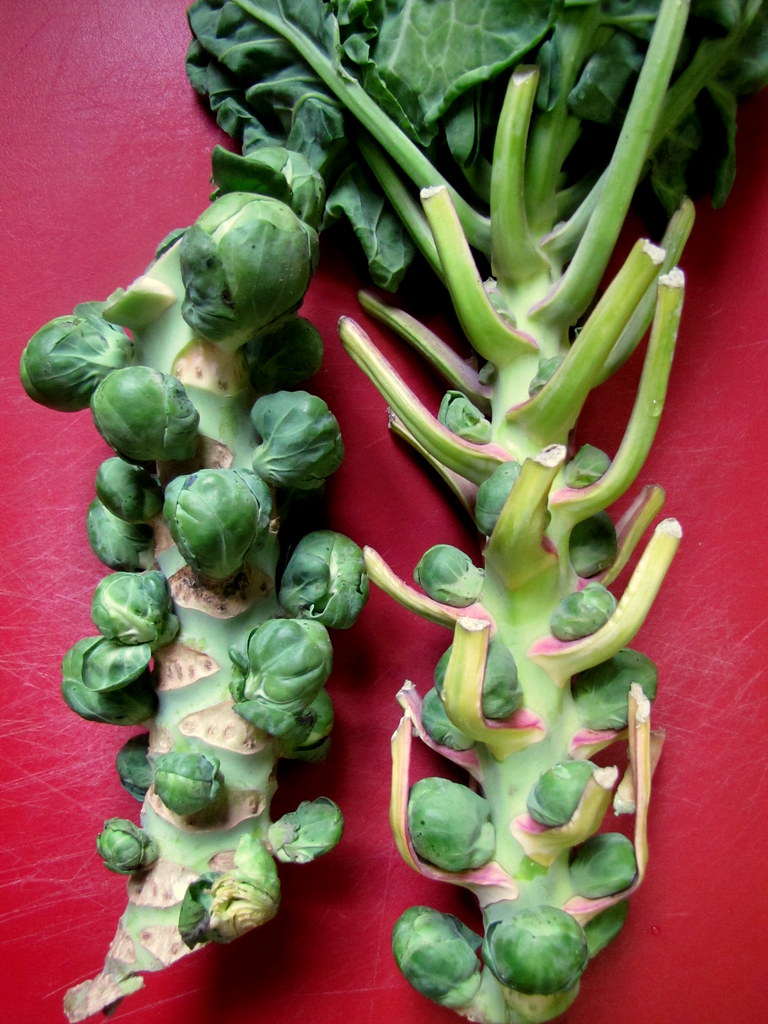 Brussels sprouts on the stalk

First up was pickling. Pickling usually comes last, with the extras of harvest season, but I didn’t want to wait and risk the chance of everyone gobbling the Brussels sprouts all up to get just one jar in. I use apple cider vinegar for my Brussels sprouts pickles, which has a high acidity to counter their bitterness. Along with salt the brine got a small handful of “Mixed Pickling Spice,” a McCormick classic which has cinnamon bark and black pepper, mustard and coriander seeds, cloves, bay leaves and chili flakes. It’s a well-rounded mix. To make them, just fill your mason jar halfway with the vinegar, add about 1/4 of the jar’s worth of water, then dump the contents into a pot. Add a sprinkle of salt and the spices (any you wish, really), and bring to a boil. Meanwhile, boil the mason jar and lid to sanitize them for ten minutes. Blanche the Brussels sprouts and get them into an ice bath right away. Quickly stuff them inside the boiled jar and fill them with the boiling brine; twist cap on tightly and submerge the whole jar in boiling water (to seal the jar) for five minutes. Pickles are ready to eat in a few days, or a few years. 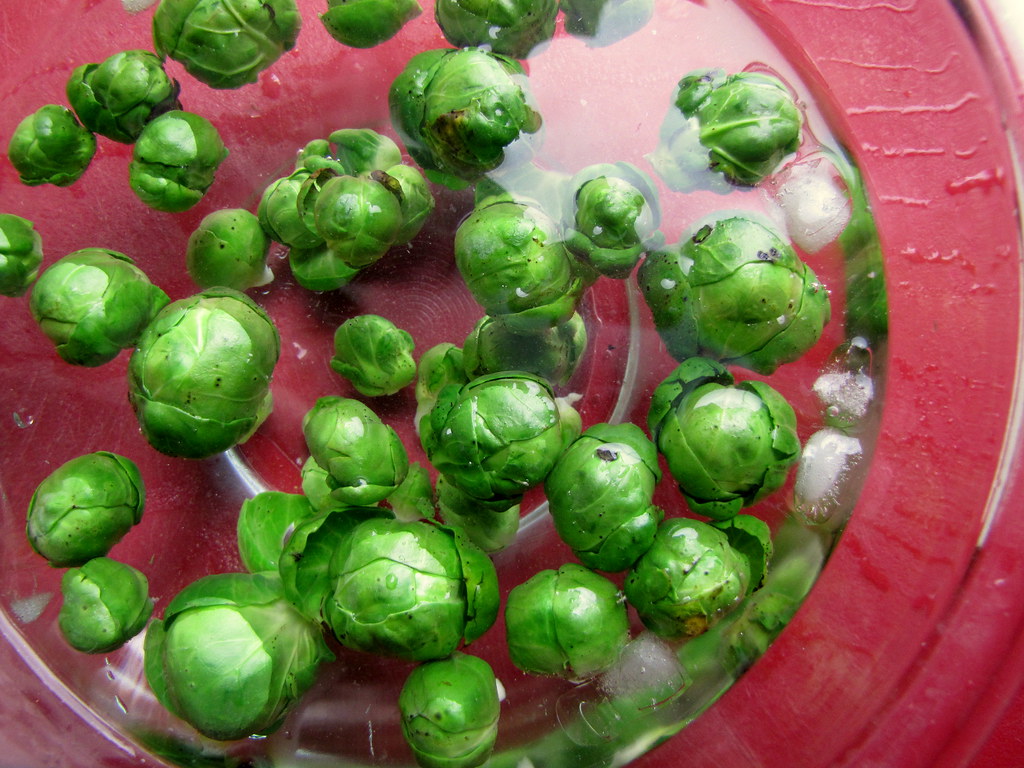 just blanched and into a bath of ice water

Since I was blanching some Brussels sprouts anyway for this, the ones that didn’t make it into the jar needed to be eaten. Who knew that blanched Brussels sprouts, served cool and so crisp, were good as a salad? Somehow, the cabbagey, sulfuric funk was softened to a blissfully mild and pleasant taste, sort of like biting into a fresh cabbage coleslaw. I’ll credit this partially to having such small, baby Brussels sprouts, thanks to my last pick-up of the season from the CSA. But also, they were blanched for barely a minute — just under, perhaps, and cooled on ice so that the cooking stopped just as abruptly as it had started. This also managed to preserve the sprouts’ light green color.

Drizzled with olive oil, salt and pepper, the blanched Brussels sprouts could be a perfect snack alone. But tossed with a few slivers of leftover prosciutto, it was something really special. A fresher tasting side dish for the holidays, or for any autumn spread, this was one of my favorite dishes of the season, and it happened completely by chance. I’d recommend really good olive oil, and for that matter, proscuitto and really fresh Brussels sprouts, the smallest and tenderest you can find. You can add baby greens to fill this out as a salad, or some chopped nuts for extra texture. A sprinkle of lemon or vinegar might not hurt, but I found the more stripped-down taste of Brussels sprouts refreshing itself. A few simple, good ingredients goes a long way, even if they’re unpopular.

Bring a pot of salted water to a boil. Prepare an ice bath by filling a large bowl with ice cubes and cold water. Once pot is boiling, drop in the Brussels sprouts. Remove them with a slotted spoon after approximately one minute, or more or less depending on their size. Transfer immediately to the ice water and let cool 2-3 minutes. Remove and pat dry.

Chop the Brussels sprouts into wedges. Toss with about half the olive oil and a pinch of salt and pepper. Arrange on serving plates with the proscuitto and drizzle on the extra olive oil to finish.

Four brownie points: We didn’t hate Brussels sprouts growing up for no rebellious reason — they’re healthy. Really healthy, with about the same nutrient profile as a head of cabbage — Vitamin C, fiber, iron, Vitamins A and K, calcium, potassium and more. Studies have shown it to be a powerful detoxin and have cancer-fighting properties. Of course, adding some shreds of fatty ham does its damage, but here it’s used more as garnish rather than the meat of the dish. Also, the heart-healthy olive oil will help counter its cholesterol.

Seven maple leaves: Brussels sprouts are in season mid-fall, and at their best. It’s a popular sight at the Greenmarket and it should also be on shelves of any grocery store around now, vetting for a place on your Thanksgiving table. It’s no doubt the ones that traveled the least, the most local, are usually the freshest, and since this is so crucial to how they’ll taste it’s a wise choice for both your palate and carbon imprint. It’s also great that so many farm stands now choose to sell them on the stalk, to keep them fresher even longer.