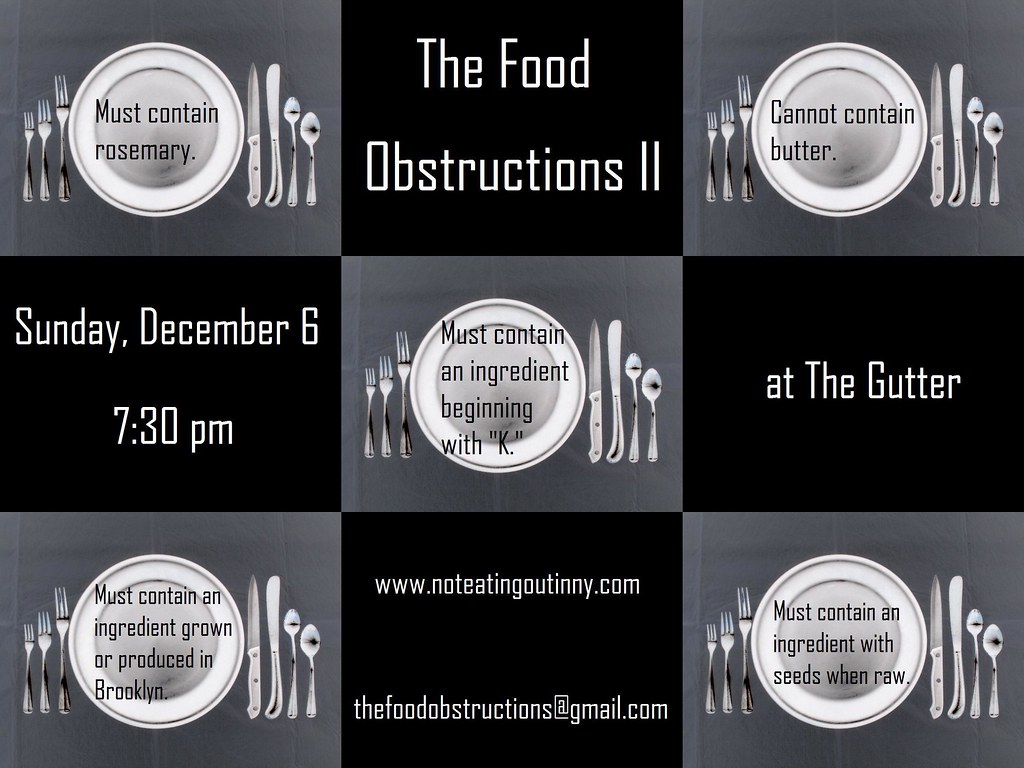 A second helping of fun! You asked for it, and we’ve come to serve: Karol, David and I will be manning the mic and passing out plates at the next Food Obstructions, the only cook-off (we know of) based on a little-known film experimentation called The Five Obstructions. It’ll be held once again at The Gutter, on Sunday, December 6th, right in time for your awakening from that post-turkey roasting slump.


The five obstructions to everyone’s cooking this time around are:

The event starts at 7:30pm at Brooklyn’s oldest indie bowling alley, The Gutter (200 N. 14th Street). Same as last time, it’s $5 to attend, eat and vote for your favorite dish, and it’s free to compete. To enter the cook-off, send an email to [email protected] Plan to make enough of your dish to serve at least 50 sample-size “bites.” If you need equipment like a chafing dish, or require anything other than a flat plate and fork for service, please say so in your message.

And a quick photo recap from the October 18th inaugural event! Also, check out Big Girls, Small Kitchen bloggers Phoebe and Cara’s awesome write-up of the event, on the Huffington Post — their eggplant crostini was to die for, too! 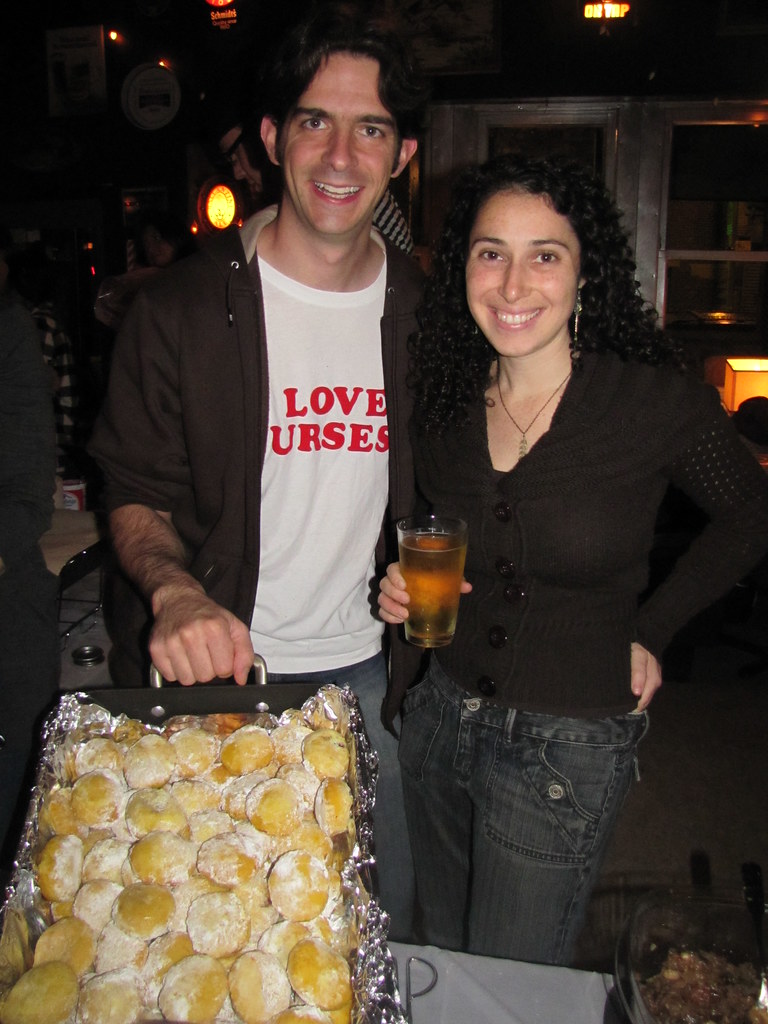 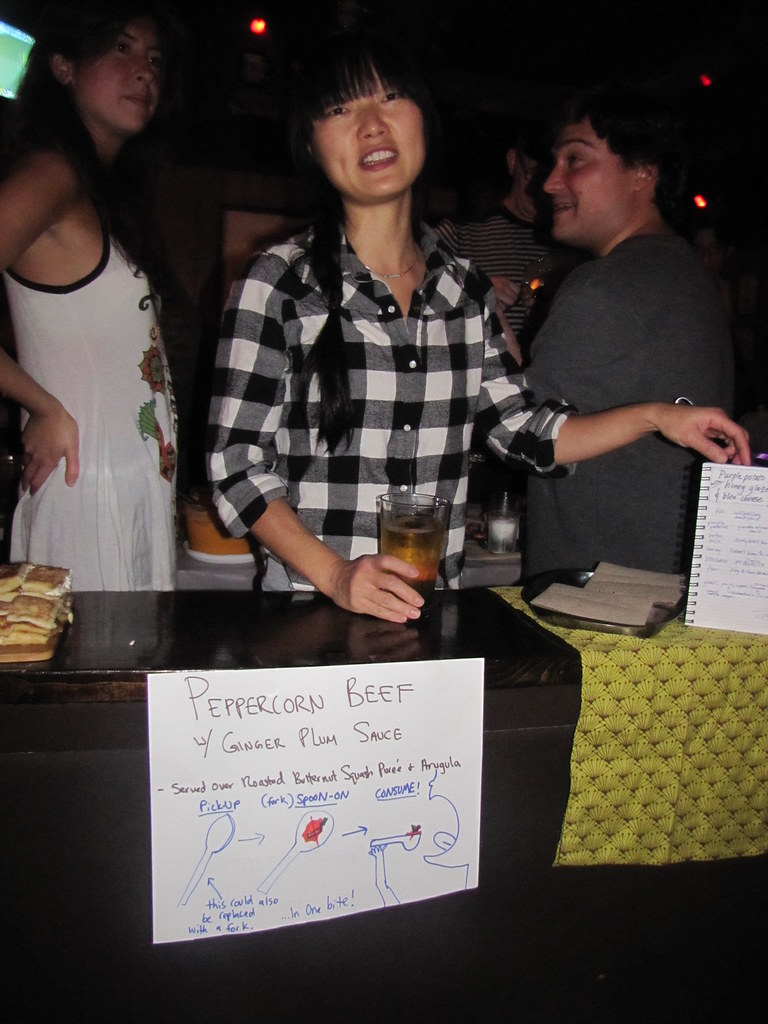 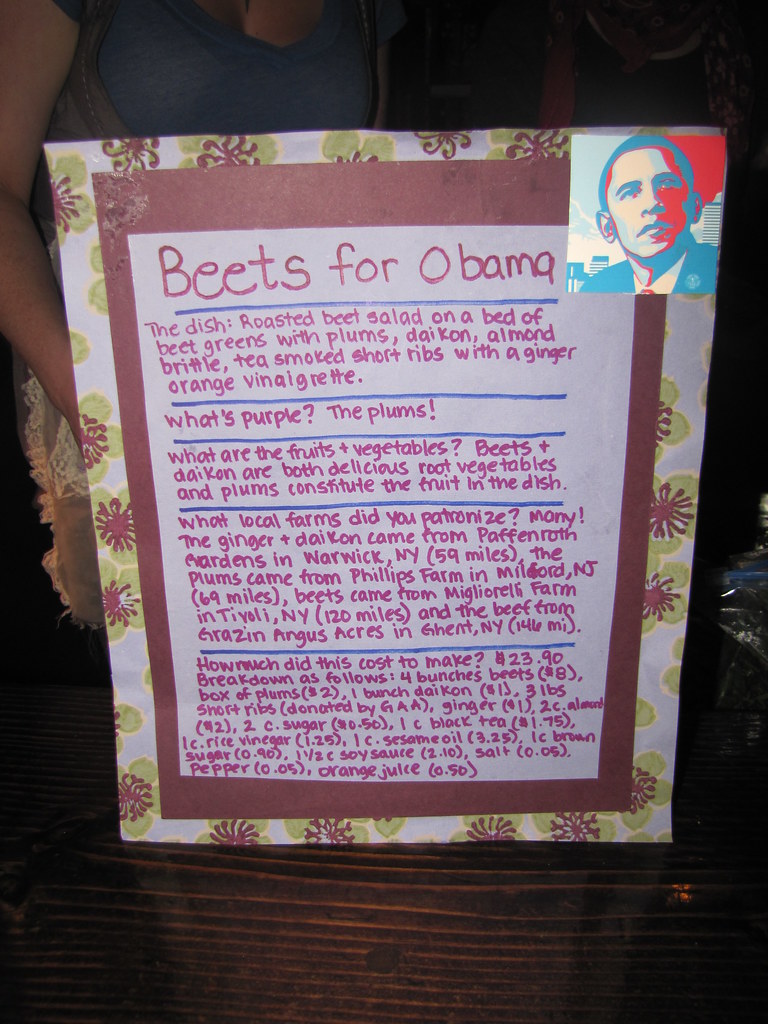 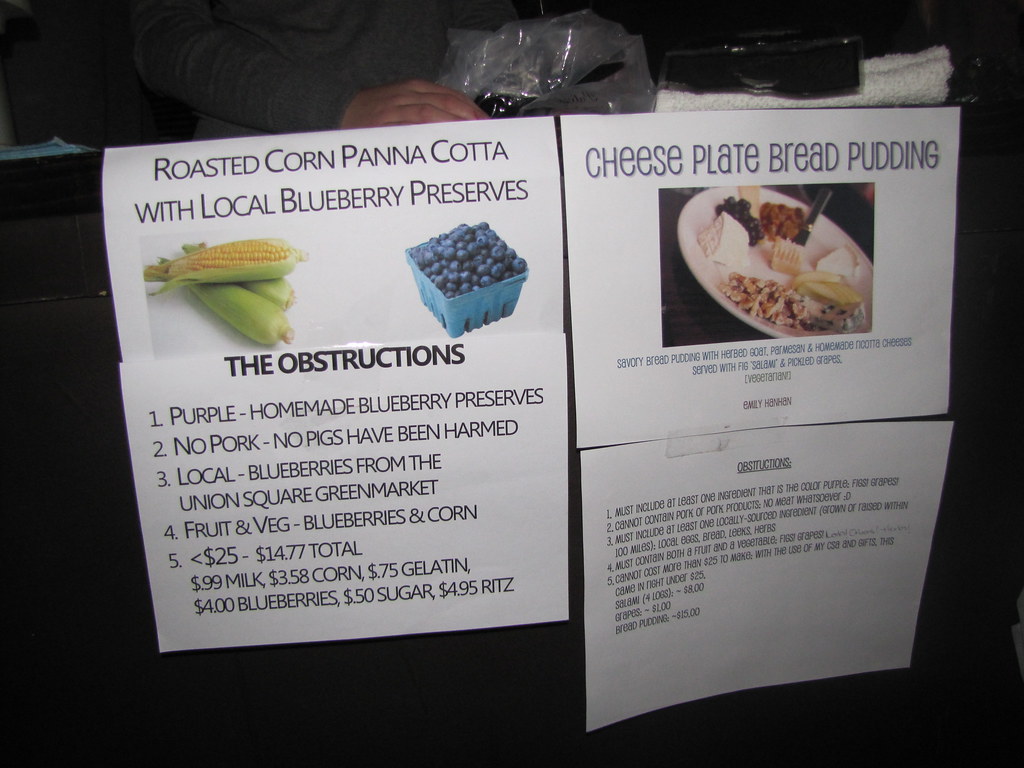 other entries went crazy with copy, too! 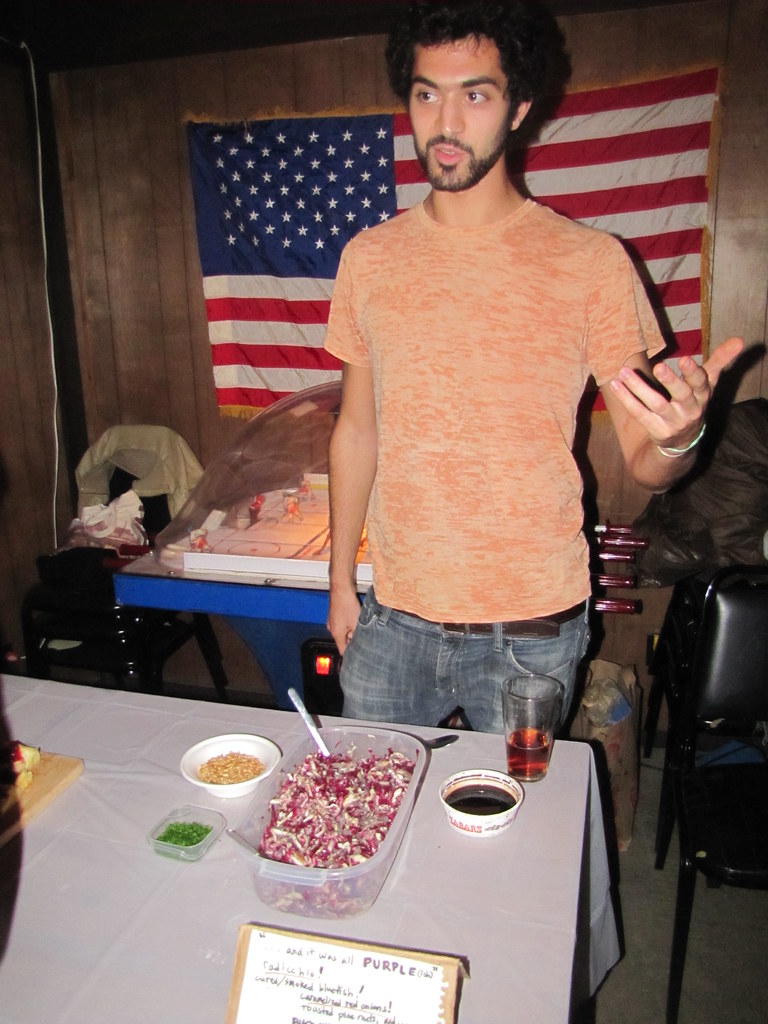 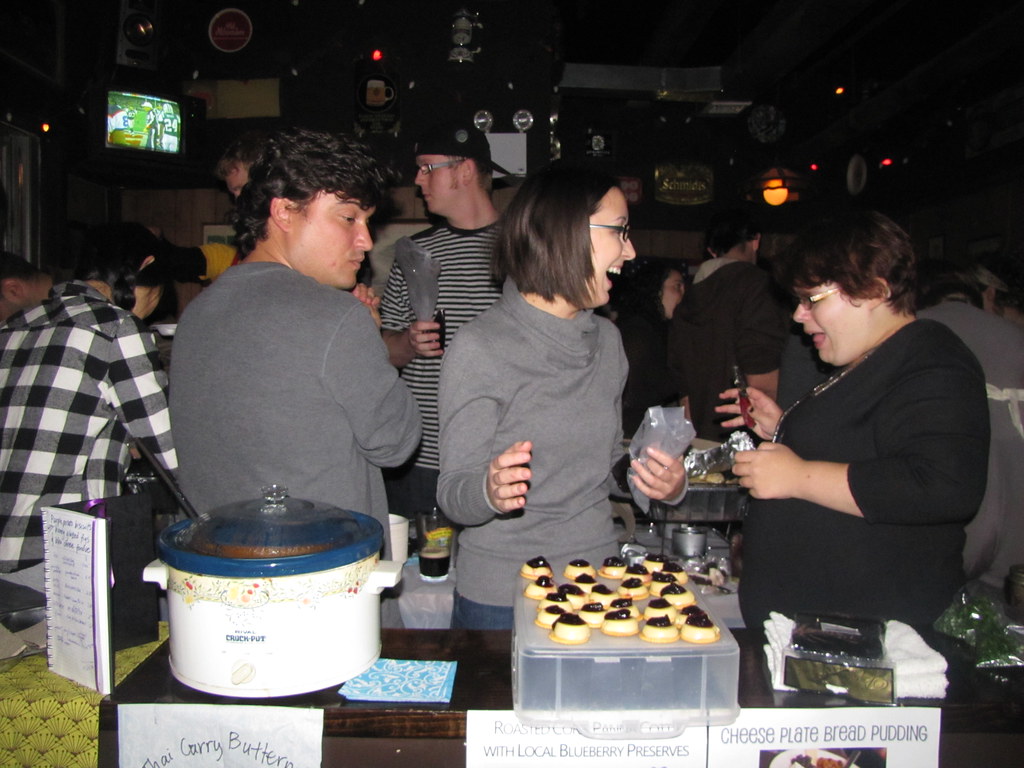 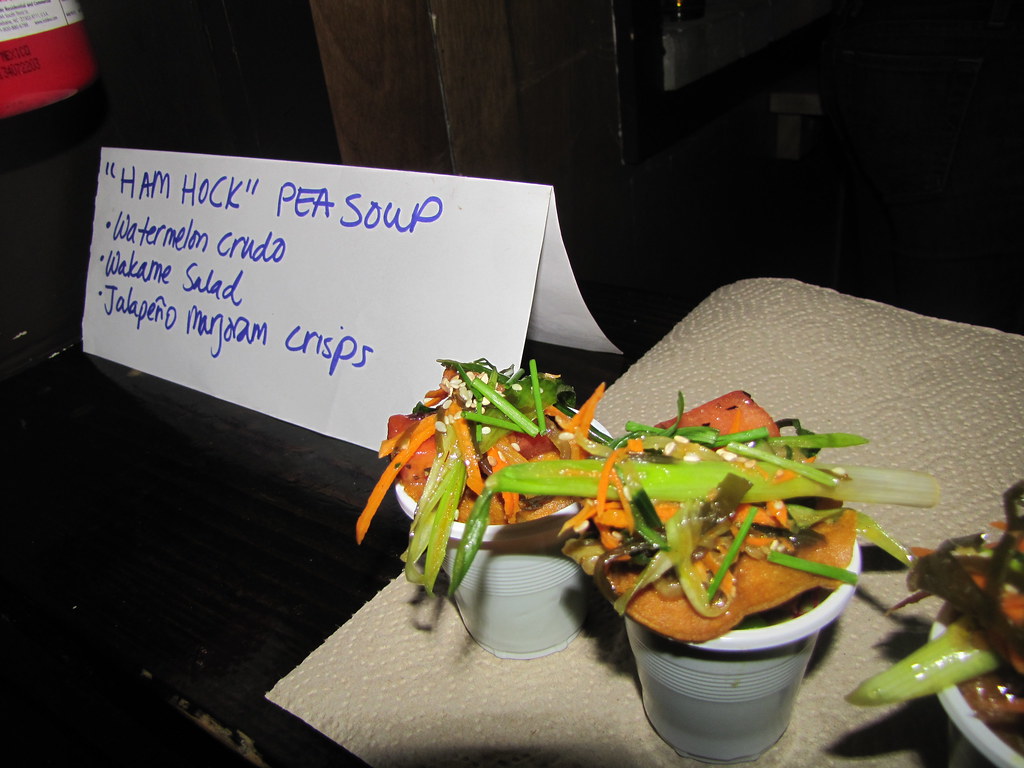 I didn’t grab a photo of the first place winning entry, but it was a peppercorn beef dish with gingery plum sauce, made by a first-time cook-off contestant Christine Collins! Each of the winners won a stash of the cash collected from everyone’s $5 entry, so it was $100 for the first place winner, $75 for second, $50 for third and a $50 bar tab for the fourth. We hope to give away the same this time or more, depending on how many folks come.

We also pulled a dirty trick by having attendees vote for their five favorite dishes on ballots, in which everyone’s picks got a score (five points for their favorite, four points for their second favorite, etc.,). When it came down to determining the winner, we proceeded to draw score sheets blindly from the box and read them aloud — but only five of them. And these five annonymous voters turned out to be the secret jury of the entire event. I’ll bet you’re wondering how results would have turned out if we’d counted them all instead. Well, we did count them eventually, and there were some surprises, but like those five random ballots that we chose, the favorites were well spread out. In fact, in those five random determining ballots, each of the entries were listed at least once — so all twelve contestants got a shout-out! And obviously, they all cooked really well. I’ve never seen such an impressive array of home-cooked dishes at a cook-off before, across the board. These twelve contestants were varsity, even those who were new to the sport. And nobody made anything close to the same thing, despite working within the same restrictions (or “obstructions”).

We expect no less determination from the cooks and hope to see many new ones on December 6th as well. We’re not going to say just how the voting will be tallied this time, but the audience will definitely have a hand again. Sign up today, or come to taste and see it for yourself. There’s nothing like overcoming the obstacles. I mean, obstructions.