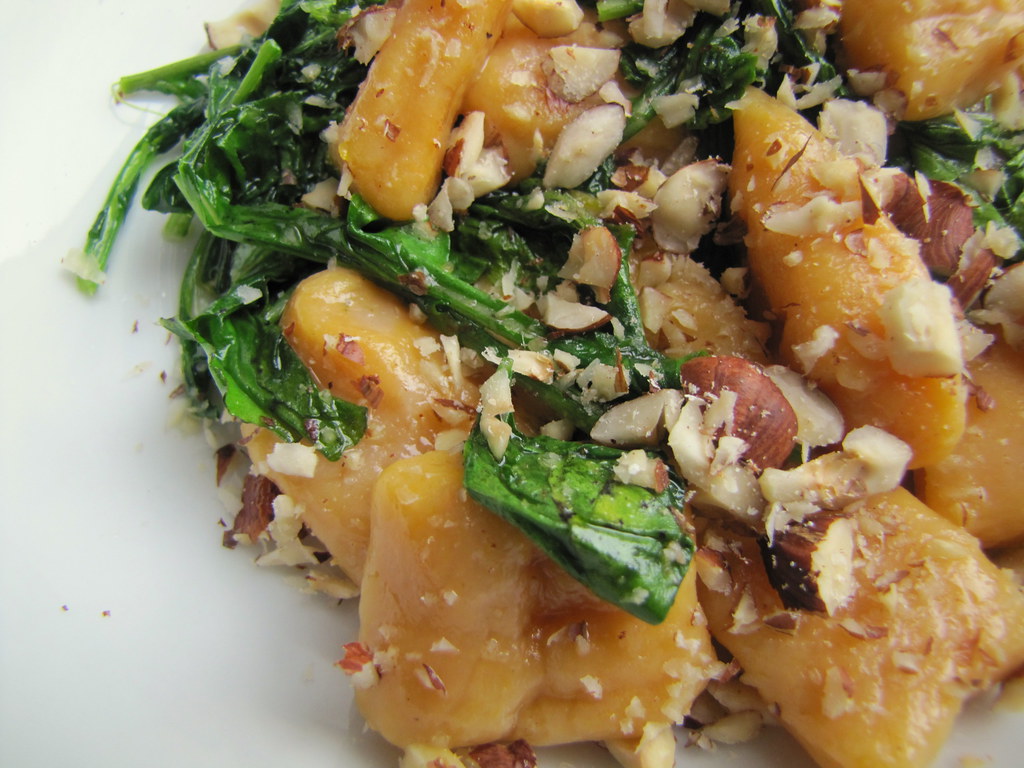 If there was one thing you could eat every day, for the rest of the days of your life, it probably wouldn’t be arugula. If asked to name a potato preference, sweet ones would rarely take the cake. I’m going to wager that one’s favorite pasta or starch substance isn’t typically gnocchi. And when you feel like a nut, hazelnut isn’t the first type that springs to mind. Yet in this dish of culinary underdogs, there’s another unsung aspect about the ingredients: these foods are category busters when it comes to health and nutrition. And combined, like this, you might even consider it for that eternal daily dose.


I’m not partial nor was I ever to sweet potatoes, arugula and the hazelnut. But I am persnickety about trying to eat what’s best for the body, because, let’s face it, I’m going to eat a lot. “Eat food. Not too much. And mostly plants,” went the tagline of Michael Pollan’s In Defense of Food — and I can’t commit to following one of those. I’m a plate mopper and a sauce sopper. I live to overeat. So it’s good to know that what I’m gorging on is good stuff — and not just because it’s mostly plants. 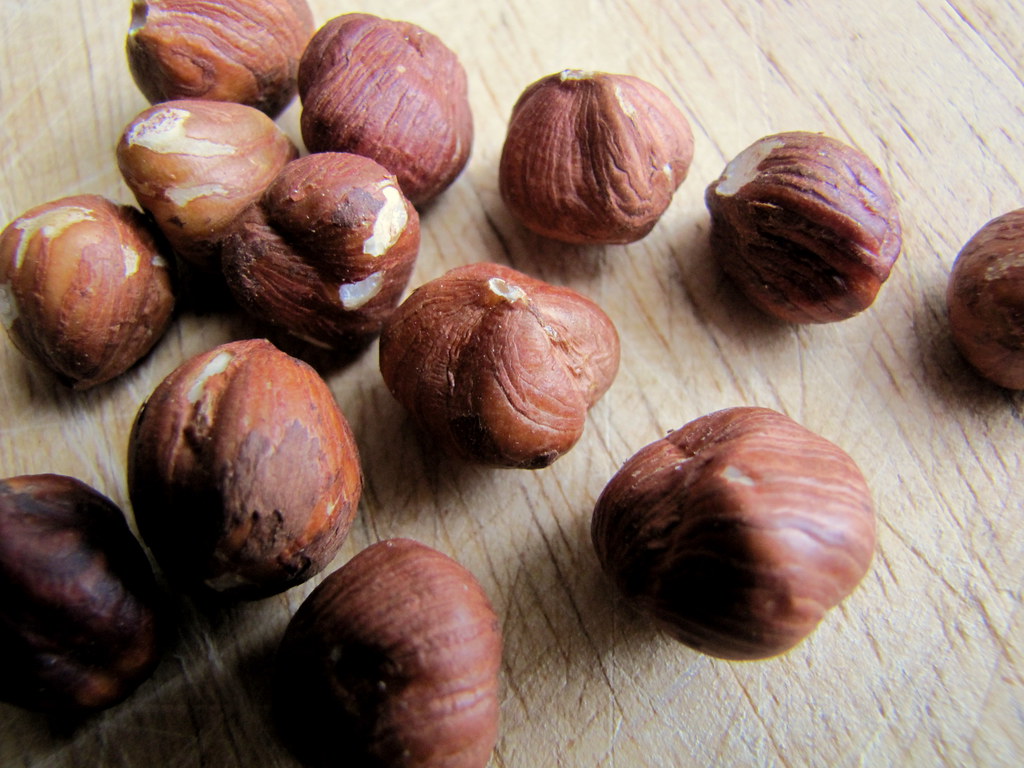 Let’s start with hazelnuts. Also known as its dorky-sounding synonym filbert, or the suave French translation noisette, hazelnuts are rich in antioxidants like Vitamin E, and they’re less greasy than most nuts, like walnuts or cashews. These marbled-brown, acorn-shaped nuggets are actually full of minerals like iron, calcium and protein, and its monounsaturated fats help lower cholesterol, making it good for your heart. When toasted, its flavor intensifies, and its papery skin peels off a little for separate, delicate touches of texture. If you’re like me and have rarely tasted them without chocolate, or as an artificial flavor concept in coffee, you might be as pleasantly surprised with them au natural as I was.

Arugula, also known as “rocket,” is a fierce-tasting bitter green that’s just as potent to your body as your palate — in a good way. (If someone can explain why the weird alternate word was chosen, please do.) Also high in antioxidants, it hunts down free radicals and boosts your immune. It’s a dark leafy green so this might not come as much of a surprise; Vitamins K, C and A are its friends. And yours, too.

Now for the sweet potato. There may be more sugar in this species, but its hue should tip you off to the fact that it has Vitamin A aplenty, and, well, take a look at this chart. 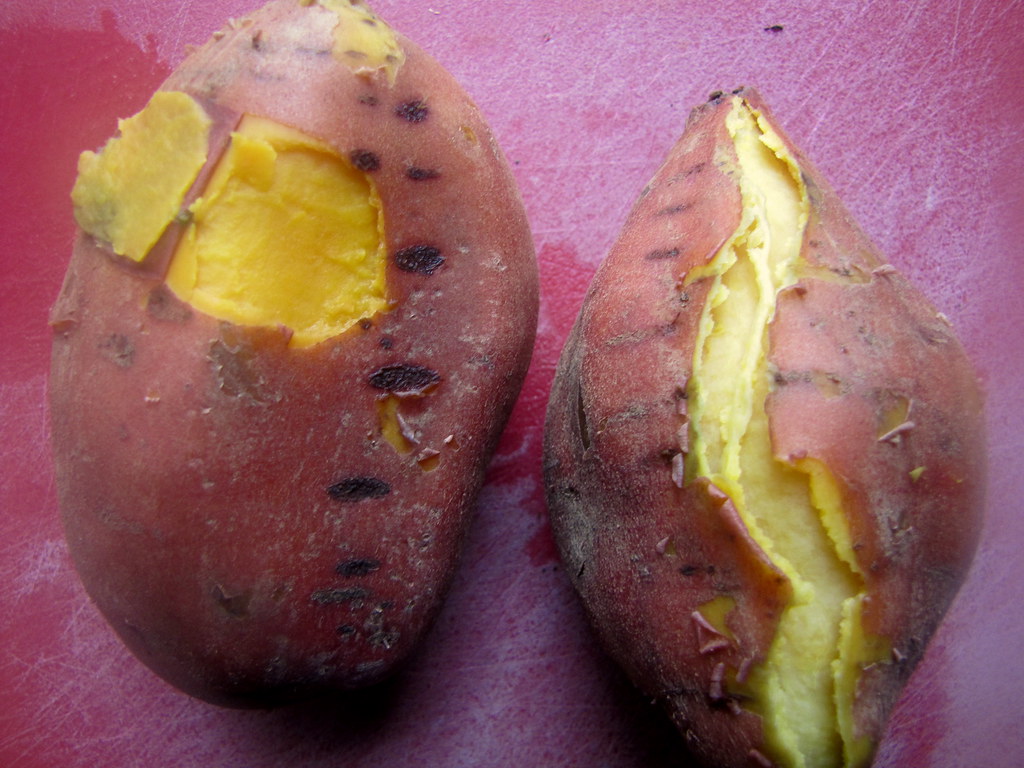 just-boiled sweet potatoes, about to be skinned

Potato gnocchi is a great alternative to egg pastas because the starches in the tuber bind it with flour, rather than cholesterol-rich yolks. I couldn’t be sure that with the different properties of sweet potatoes, they’d suffice for an adaptation of the classic. But I decided to give it a try. Following a recipe for basic potato gnocchi in Marcella Hazan’s Essentials of Classic Italian Cooking, I merely swapped the russets for a couple good-looking sweet potatoes. They’re boiled first, and you’ll need to be ready to work with the potatoes right away, while they’re hot, Hazan advised. For lack of a ricer or food mill for the next step, I passed the peeled potatoes through a colander with a spatula. (Mashing the potatoes will make them gummy, and unfit for making gnocchi.) Next, flour is folded in until you have a dough that’s just dry enough to turn onto a floured surface, and roll into a log. 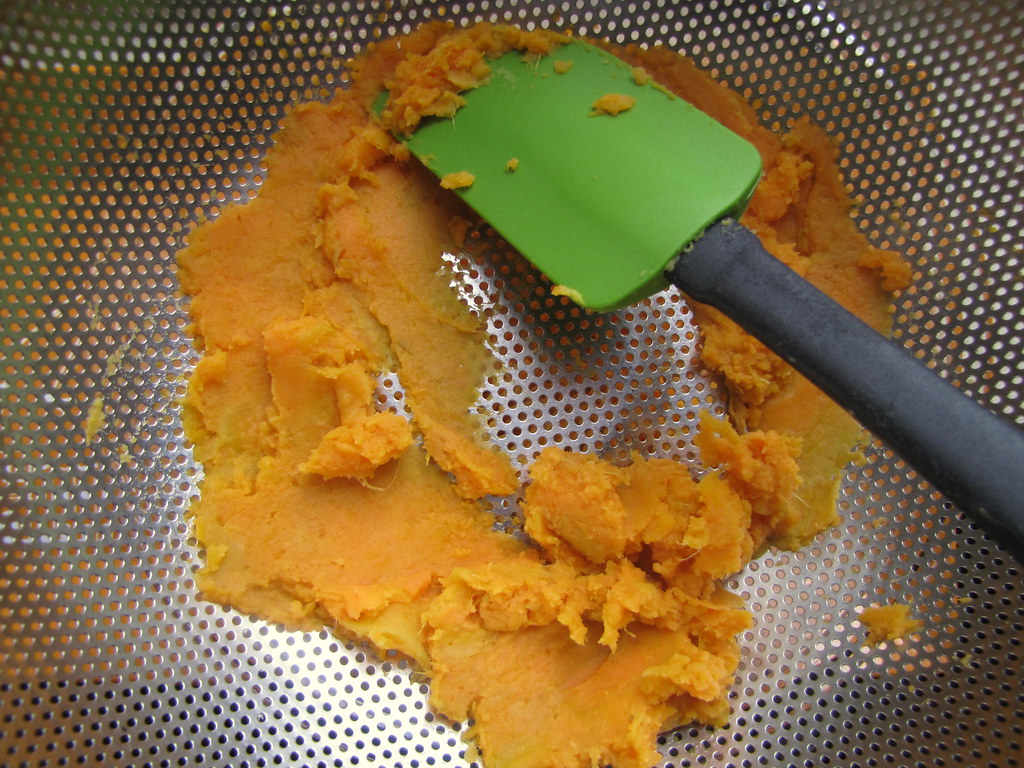 I passed the potatoes through a colander instead 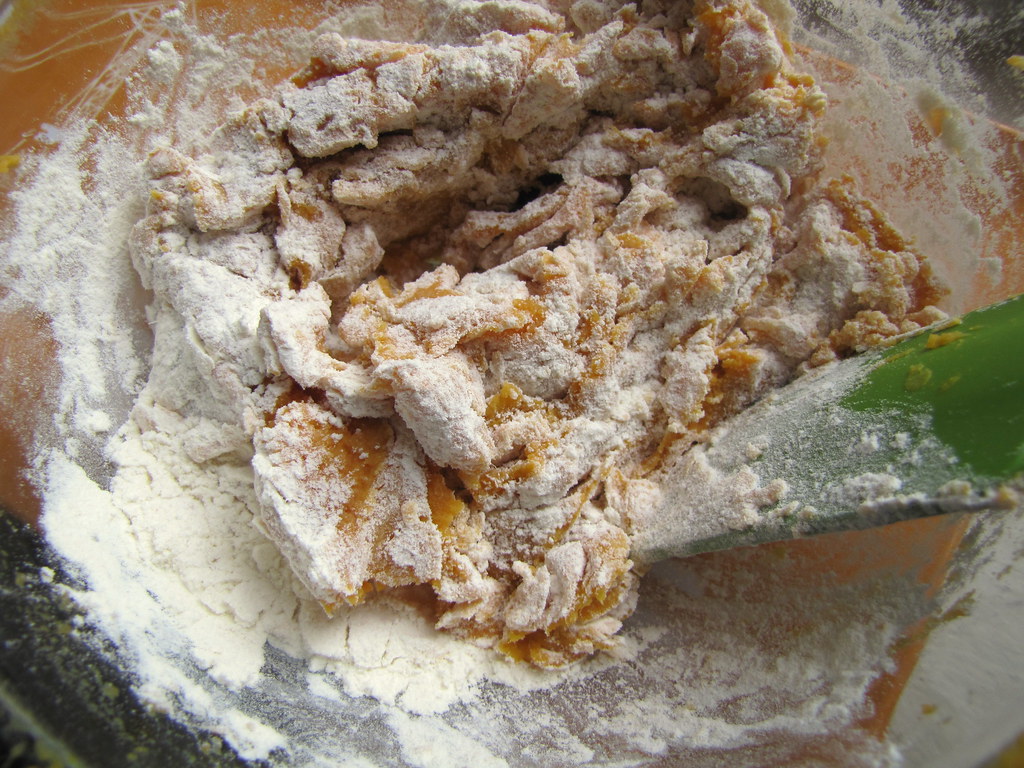 mixing the fluffed potatoes with flour

So far, with sweet potatoes, so good. The dough is then cut into bite-sized pieces (however large you like — I’ve seen gnocchi at times as large as a clam). To give their surface a texture that’ll more easily grip the sauce, you can score them lightly with a fork. It turned out the “sauce” I’d be preparing for this batch had no liquid that could benefit from this texture, so you can leave this part out entirely if you wish. But the little prong marks do give them a more classic look. 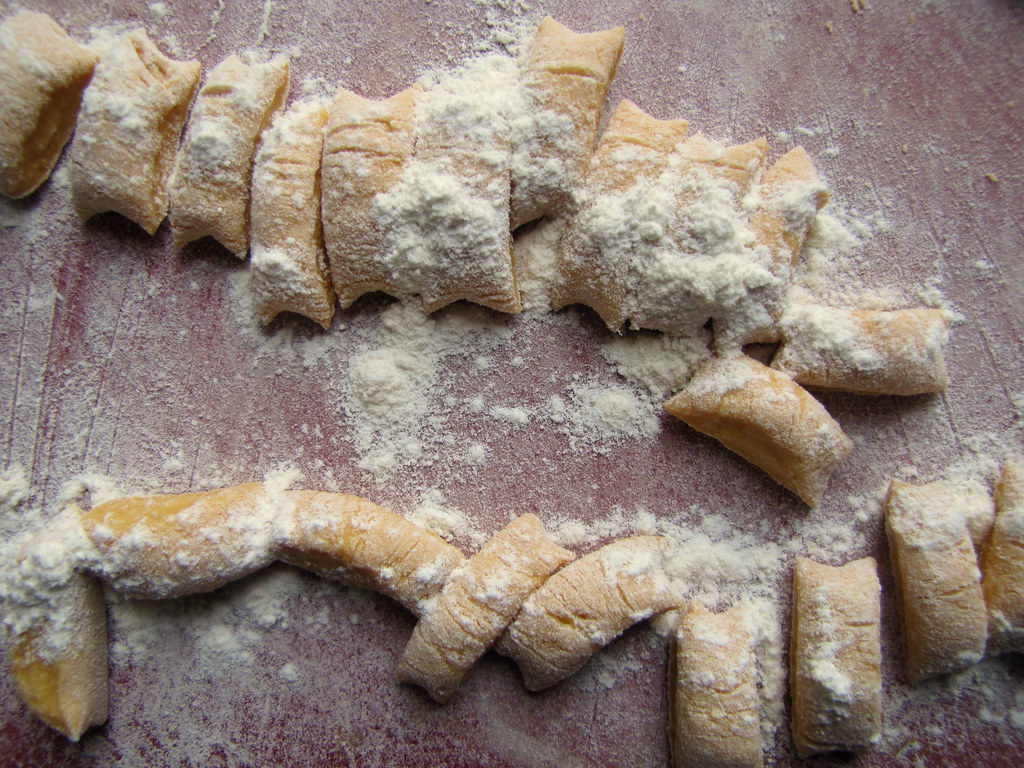 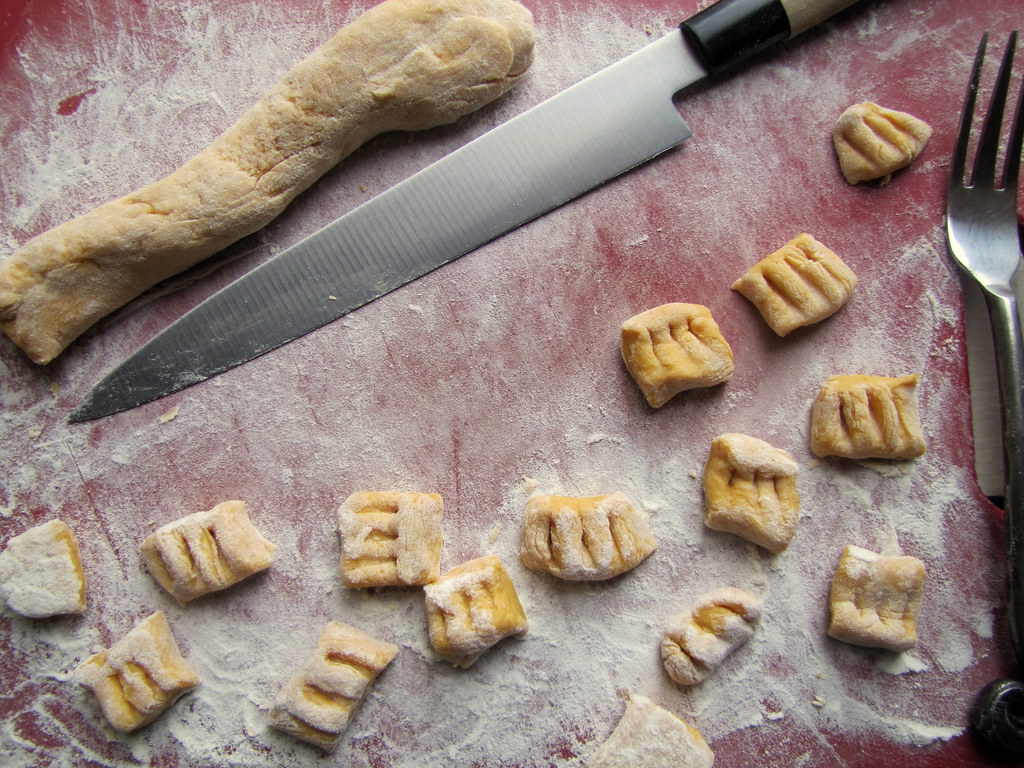 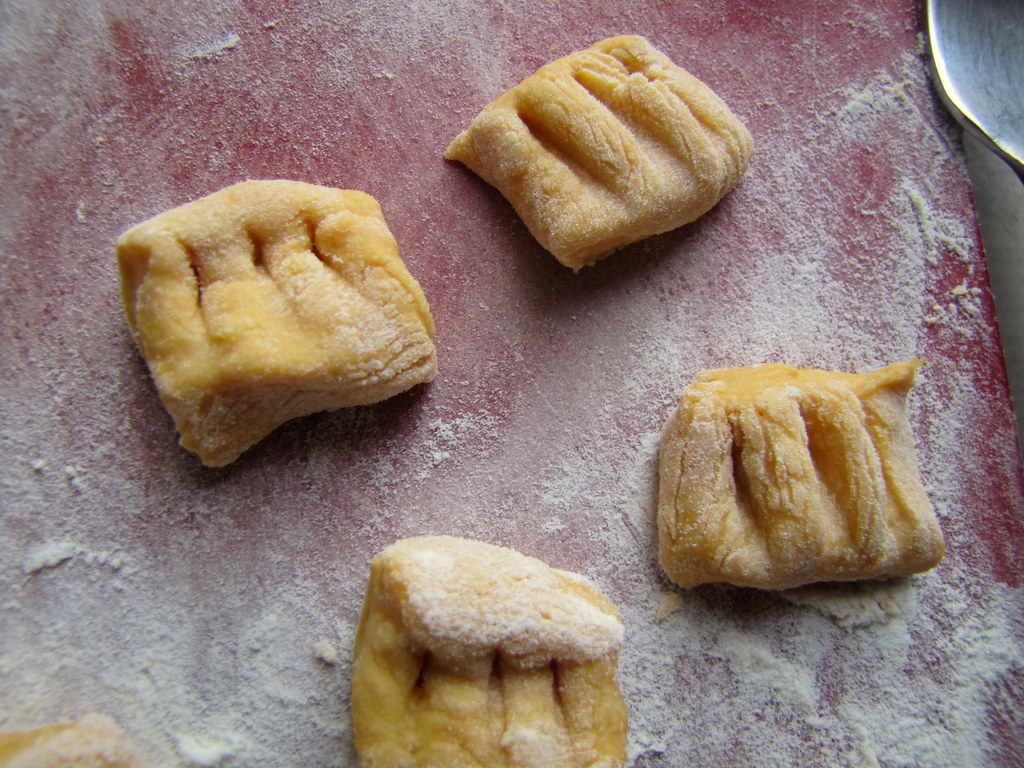 the dough is cut and pressed with a fork, well-floured

A quick boil, and the sweet potato gnocchi was finished. They didn’t look terribly beautiful, my misshapen hunks of noodle, but a whole lot of things must have happened entirely right. Because these gnocchi, despite having sweet potatoes had just the chewy, delicate texture I was looking for; and because of them, had a deliciously subtle sweet taste.

Since that was quite a lot of work (although it’s much more simple than making fresh pasta, which needs to be kneaded), I spent virtually no time on the “sauce.” Disregarding even garlic, the arugula was merely wilted on a hot pan with some olive oil, and sprinkled with salt. The just-cooked gnocchi were tossed into this pan, with splashes of their starchy cooking water along the way. Salt, pepper, and a little bit of olive oil later, the dish was topped with a shower of crushed hazelnuts. 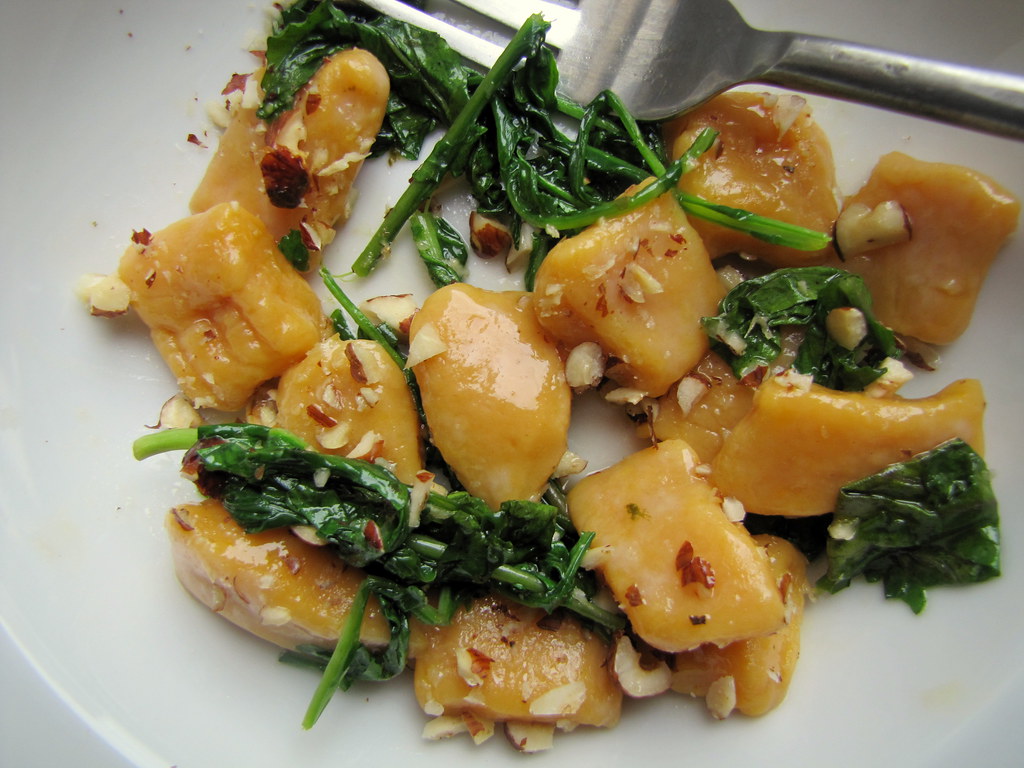 It’s not the only thing you can do with sweet potato gnocchi, once you’ve gone through the trouble to make them just right. But as it turned out, it was a very heart-healthy, antioxidant-rich application — and this, I hereby admit, was completely unintentional from the start. I was just kind of looking for things to say about the dish, and stumbled upon the facts.

Boil the sweet potatoes until tender, and try to avoid poking them with a fork too many times in the process to check on doneness. Remove with a slotted spoon and let cool a minute or two; peel the skins off (they should slip off easily). Working while the potatoes are still hot, pass them through a ricer or food mill (or substitute a colander with similar-sized holes and a spatula). Immediately add about half the flour and fold into the potato mixture with a spatula. Continue adding a little more flour until the dough just comes together and won’t stick to your floured hands. Turn onto a floured cutting board and separate into two or three balls. Roll each one out into a roughly one inch-thick log, and cut into roughly one square inch pieces. Sprinkle with flour and roll the pieces around with the flour on all surfaces. Optional: press a fork onto one surface of each piece to create the classic gnocchi shape.

Heat a large, heavy-bottomed skillet and add the hazelnuts. Toast for about 2-3 minutes, shaking the pan frequently. Remove from the pan just as you begin to notice some sides of the nuts darkening. Transfer to a bowl or a cutting board to crush or chop.

Bring a large pot of salted water to a boil. Work in two batches to ensure that the water keeps at a rapid boil: add half the gnocchi to the water. Let cook about 3-4 minutes, until they just float to the surface. (Depending on how large your gnocchi is, this may take longer or shorter.) Taste a gnocchi that has risen to the surface; if it still tastes doughey and is very soft, continue boiling for a minute or two longer.

Meanwhile, heat a large, heavy-bottomed pan with about half the olive olive and when it’s hot, add the arugula and a pinch of salt and pepper. Stir frequently for about 2 minutes, until the arugula is just wilted. Using a slotted spoon, transfer the finished gnocchi to the pan with the arugula. (You’ll be transferring some of the cooking water as you do so, too.) If desired, toss in an extra splash of the cooking water, if things are sticking to the bottom of the pan. Season with more salt and pepper, and drizzle with the rest of the olive oil. Transfer to serving plates and top with the crushed hazelnuts. Finish with the optional garnish of grated nutmeg. Serve immediately.

Two brownie points: We’ve already covered the nutritional benefits of most of the ingredients, but the fast cook in only olive oil is another boon to this dish’s healthfulness. Olive oil, of course, is another monounsaturated fat, that, like nuts, helps reduce cholesterol (rather than butter, which contains it, and commonly drenches gnocchi and pasta). I like to “wilt” the arugula because it’s so tender, and this just softens the zesty, peppery flavor of it fresh, which I enjoy anyway. It also helps retain the vitamins the green provides — and really cuts down on your cooking time.

Seven maple leaves: A really short ingredient list is often sign of a high green factor rating, so I’ve learned. With really fresh, in-season raw ingredients, you don’t need to flavor them too much. The sweet potatoes and arugula I had were farm-fresh and very flavorful (and sadly, were part of my CSA’s last batch of the season). Hazelnuts were obtained at Trader Joe’s, and before there, I don’t know — but unlike other specialty purchases, nuts are good for stocking the pantry, because they can be used up in so many different ways.