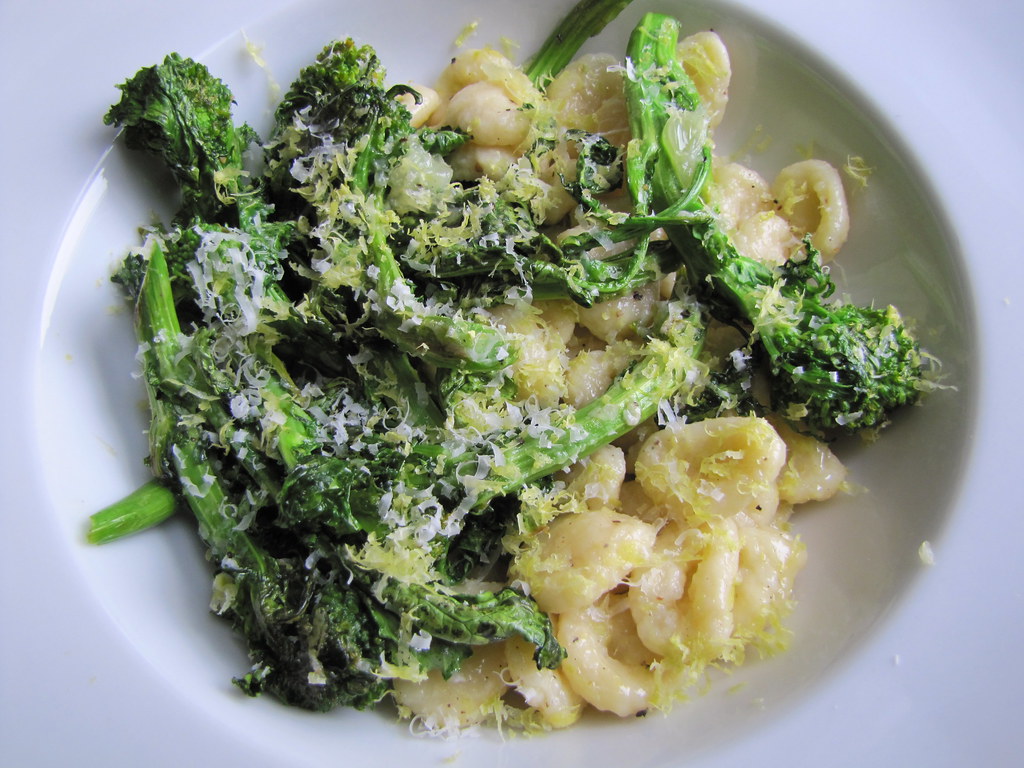 Anyone who’s a real purist of pasta is going to take one look at these misshapen dumpling-like things and sneer. Can’t blame me for being a little over-ambitious for a weeknight meal, but you can for exaggeration in calling these “orecchiette.” Well, I’m just not sure what else to call them. But they taste alright — especially when tossed in a buttery, fresh lemon sauce and surrounded by spicy broccoli rabe.

You know what’s also ambitious? Eating a whole bunch of broccoli rabe in one sitting. Also called broccolini, broccoletti, or rapini, this strikingly bitter member of the brassica family will wake up an unsuspecting tastebud with a slap. Good thing it packs a major punch in antioxidants, and more than all the Vitamin K you’ll need in a day per serving. If you’re feeling brave, go ahead and sautee it as I’ve done in this recipe without blanching and shocking it first; otherwise, this trick will lessen some of that bitter sting. 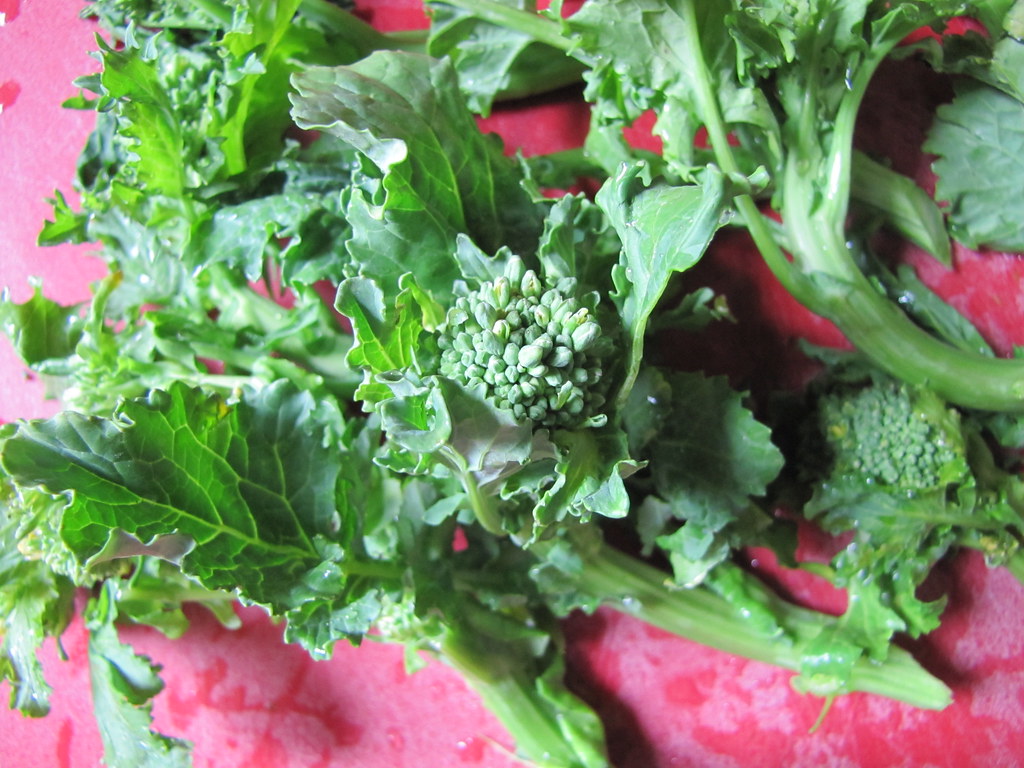 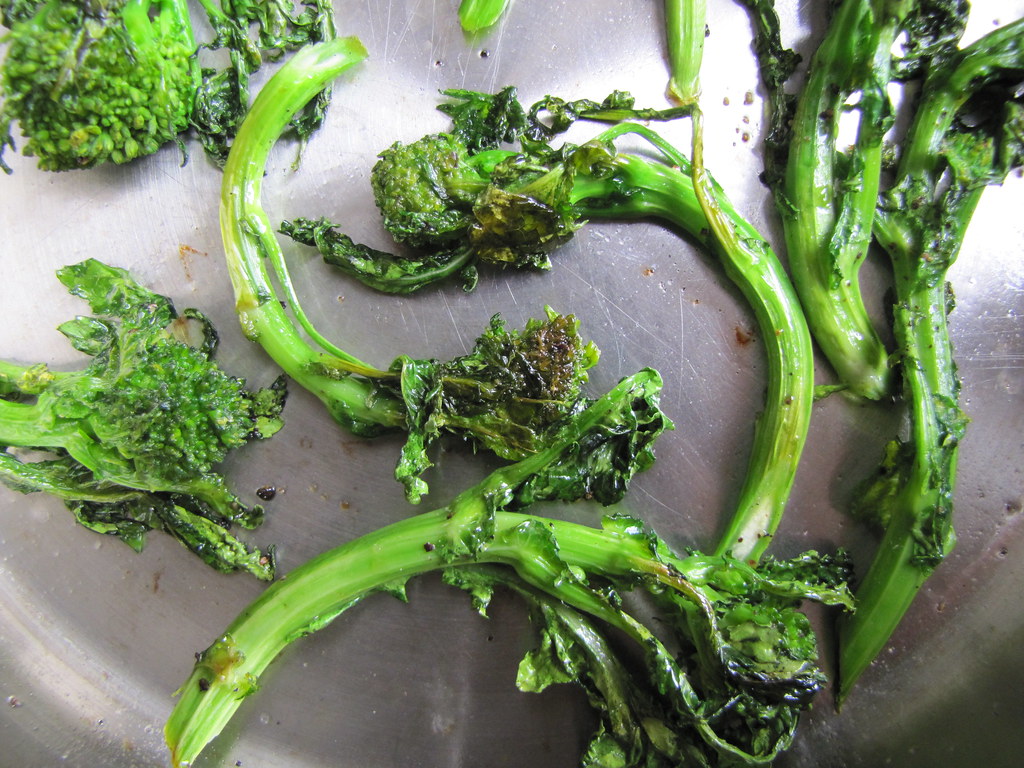 and after a quick swirl in a hot pan with oil

I’d originally wanted to make gnocchi with it, at home one night. So I boiled a potato, shoved it through a colander (for lack of a potato ricer), and went on making the dough a la this recipe, adapted from Marcella Hazan’s Essentials of Italian Cooking. But when it came time to cut the dumplings off into signature squares, something possessed me to try smushing them into the ear-shaped pasta orecchiette instead. (Perhaps my recent trip to Food52 headquarters, in which Amanda, Merrill and I made a reader’s orecchiette recipe with creamy peas and mint.) Making this type of pasta fresh is not as commonly done at home nowadays as other types, because it can be so tedious. But it’s sure fun: you take a small knob of dough, place it on a well-floured surface, and smush it to one side, creating an elastic dimple with the edges curling over. It kind of looks like an ear in the end, or at least a cartoon one like that of Mr. Magoo. And the little well in the center is perfect for holding sauce. 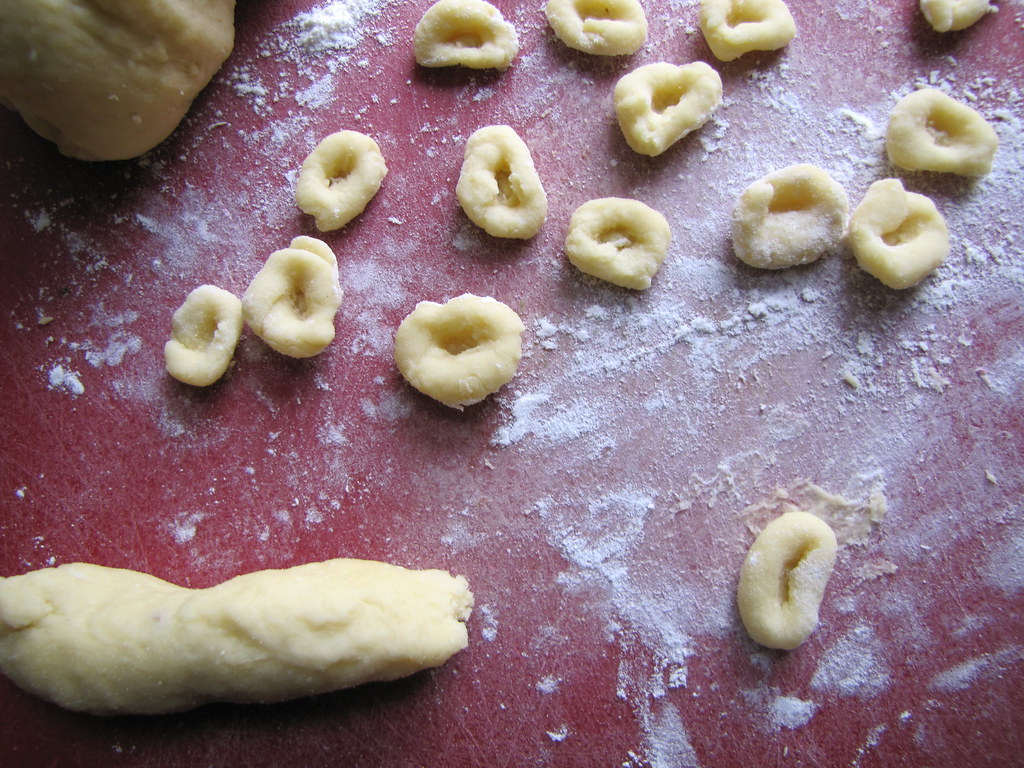 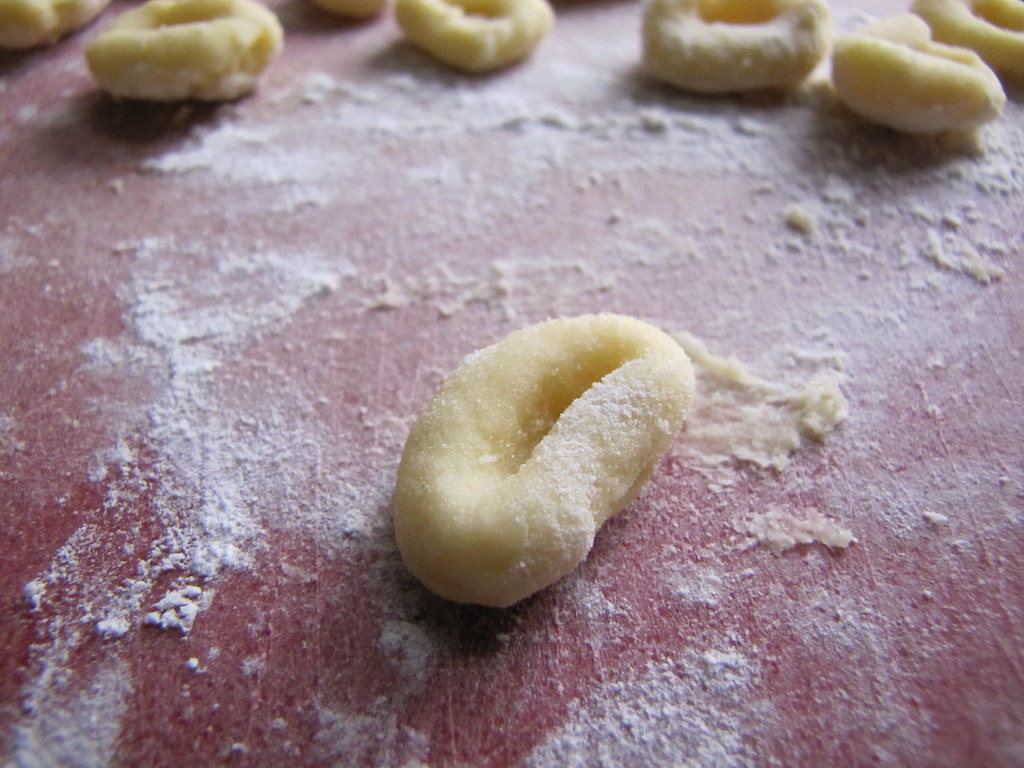 potato-pasta dough is rolled out, and pressed into little ears

After making the first few fun, delicately wrought “little ears,” my patience ran out and I ripped off bigger hunks and hastily smushed my way through the rest of the dough. It was a dinner for one, and no one else would be seeing these things until now, as it were. As a consequence, the shapes came out much chubbier than the ideal orecchiette might be, almost as chunky as gnocchi in the end. Go figure.

For a simple sauce I melted a good glob of butter and squeezed half a lemon all over the pan once it melted. The just-boiled pasta was tossed in, and given a whirl to coat them completely while leaching some starch into the sauce. Plenty of grated Parmiggiano-Reggiano went in, the perfect complement to broccoli rabe, as well as the broccoli rabe stalks, which had been sauteed simply and set aside. 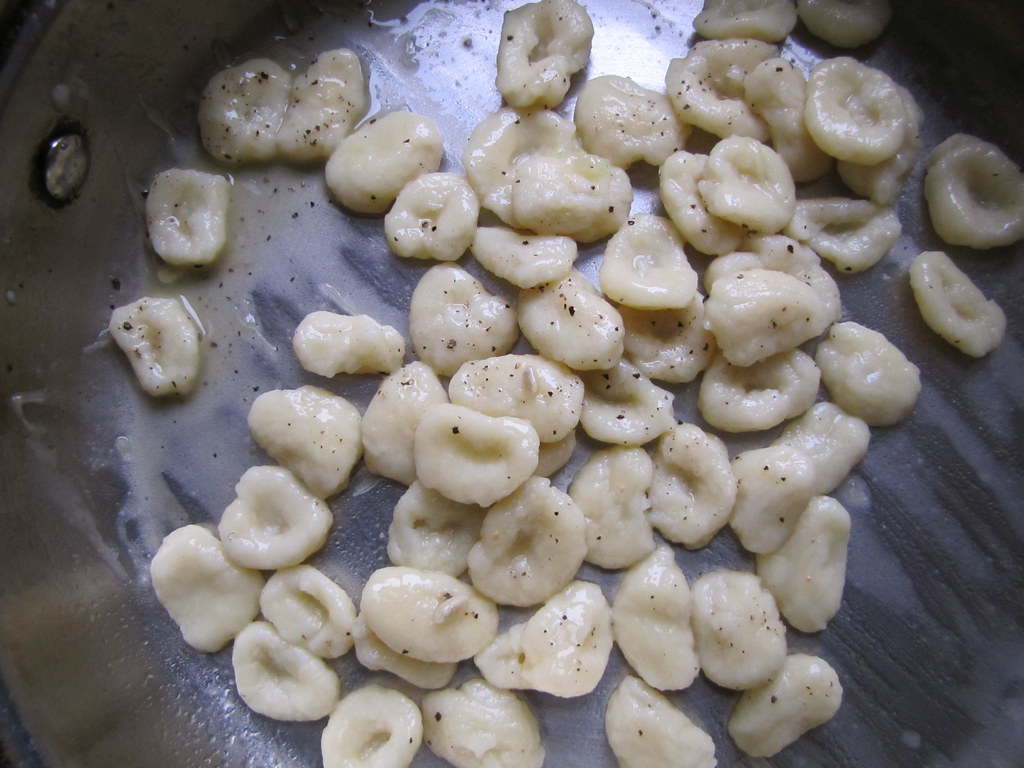 boiled, and tossed with butter and fresh lemon

Moral of the story, I really don’t think it matters much if your food has a name, follows a tradition, or even a predetermined path. It can be good, and that’s it. It can be ingredients well-prepared, even on the fly. If you don’t have a name for your dish and guests ask, “What is this?” just try saying, “It’s good.” And maybe give it your own.

After all, that’s how dishes and traditions became so in the first place. Someone was having fun in the kitchen and decided to form their pasta into little ears. 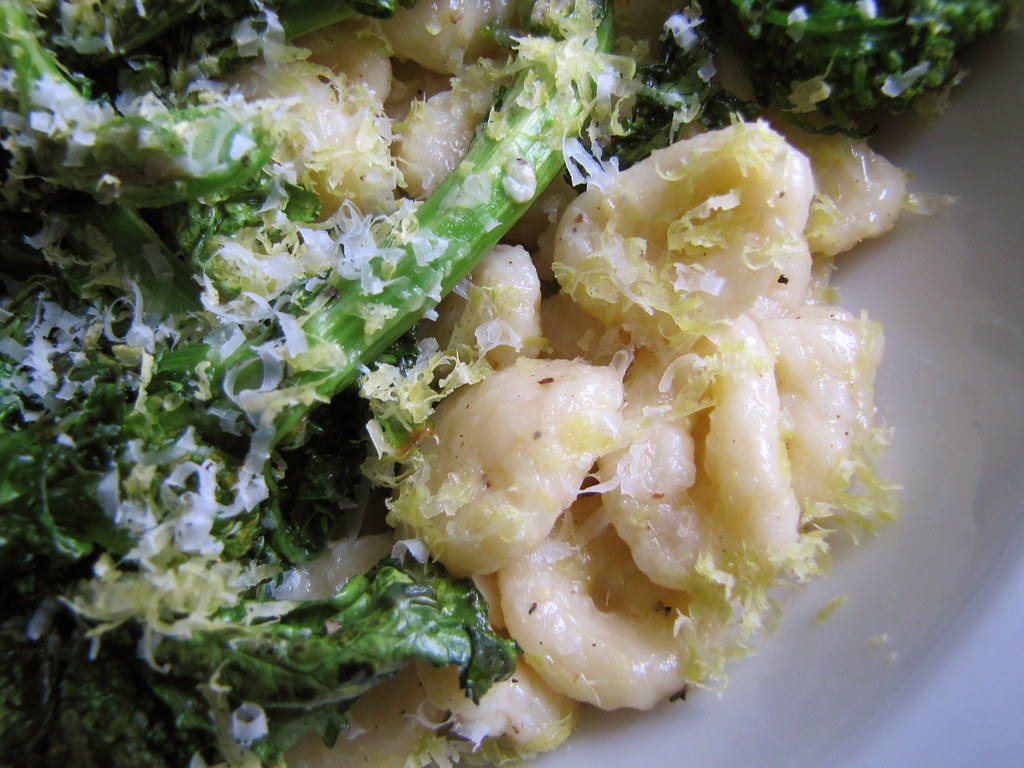 Boil the potato until fully cooked and drain. Pass through a ricer or food mill (or substitute a colander with similar-sized holes and a spatula, as I did). Crack the egg and mix thoroughly with the potato. In a large bowl, add the flour and make a well in the center; add the egg mixture in the center and begin stirring so that a little flour comes off the sides with each rotation. Continue stirring until all the flour is incorporated and the dough is somewhat sticky, but workable. Transfer to a well-floured surface and knead for 5-6 minutes or until smooth. Let rest 15 minutes. Cut into sections and roll out long tubes of dough about 1/2 inch thick. Break off small knobs of dough at a time and on a well-floured surface, press down firmly with your thumb while pushing to one side so that the dough stretches into a curled, concave shape. Dust with flour and repeat until all dough is used up.

Heat a heavy-bottomed saute pan with the olive oil. Once hot, place down the broccoli rabe and season with salt and pepper. Let cook on one side about one minute each to caramelize the surfaces just a bit. Reduce heat and cook on medium-low about 5 minutes or until stems are thoroughly cooked and deeper green in color. Remove from pan and set aside.

Bring a large pot of salted water to a boil. Drop in the fresh pasta and let cook about 2 minutes. Pasta should all rise to the top. Meanwhile, heat the butter over medium in the saucepan, and add the juice of the lemon. Once pasta is cooked, transfer with a slotted spoon directly into the pan. Add the grated parmiggiano and lemon zest and return the broccoli rabe to the pan. Toss to coat evenly, and serve immediately.

Four brownie points: Your immune system will be thanking you for this meal, with its bitter green full of Vitamin C and Vitamin A. But it’s not a completely angelic one, with such a rich, buttery sauce and sprinkling of cheese. Try going easier and easier on yourself with these ingredients, train your palate to need less of them as you cook more. I certainly did, and am still astounded every time I eat out by the way most pasta is dripping with oils so much that it dribbles down my chin.

Seven brownie points: I got the broccoli rabe from one of my favorite produce stands at the Greenmarket, D&J Organic, just because it looked really nice that day. The potato was from another. Eggs, butter and flour can actually all be found locally produced and at the Greenmarket, too — check out the flour from Cayuga Organics. Just the lemon and imported Italian cheese make this meal non-local, but you could always swap in a different cheese if you like.