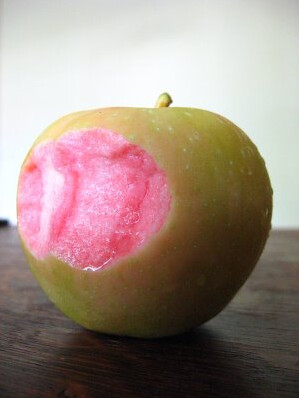 A couple weeks ago, I asked food bloggers to participate in Just Food‘s annual fundraiser party, Let Us Eat Local, by hitting their kitchens at home. The event, which takes place tonight at Prince George Ballroom, will feature small plates from many of the city’s most renowned restaurants, like Blue Hill, Gramercy Tavern and Jean-Georges. In celebration of Just Food’s mission, each restaurant was asked to present courses that showed off the local and seasonal harvest. But before they unveil their offerings, here are five food bloggers who did an exceptional job at just that. Including the judges’ chosen winner, Laena McCarthy, who made a pink pearl apple (above) jam and won a ticket to Let Us Eat Local.

At Dave’s Kitchen, Dave Klopfenstein made an unconventional fresh fettuccine with specks of eggplant(!) in the dough. As well as ground black pepper. He tossed it with his favorite heirloom tomato and roasted garlic sauce, which sounds like a really delicious upgrade of more simple fresh tomato sauces, and perfect for using up those ready-to-burst tomatoes of any type. Dave actually came in second place, and won a set of mixing bowls from Preserve for the effort! 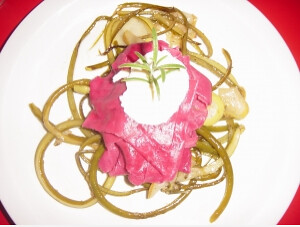 At Logical Nonsequitor, Jessica Freeman-Slade stained her homemade pasta with beet juice instead. In her post, she includes photos of the farmers whom she bought her produce from, like Maxwell’s Farm and Patches of Star Dairy at the Greenmarket, as well as a great recount of making the dish, a beautiful “handkerchief” pasta with garlic scapes. If that meal doesn’t look like it stepped out of a five-star restaurant, I don’t know what does. (Jessica is really good at plating at home, too!) 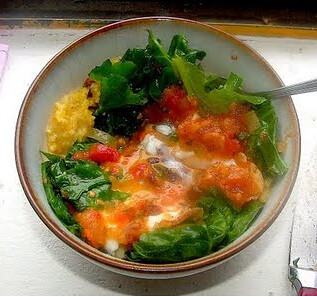 (Non) Adventures of an Amateur‘s Emily Hanhan traded pasta for polenta, but with a really summery twist: instead of cornmeal, she used fresh sweet corn. With produce from her CSA, she made tomato sauce and garlicky greens and topped it all with a fried egg to round out the perfect, satisfying weeknight meal. I am definitely going to be copying this one soon. 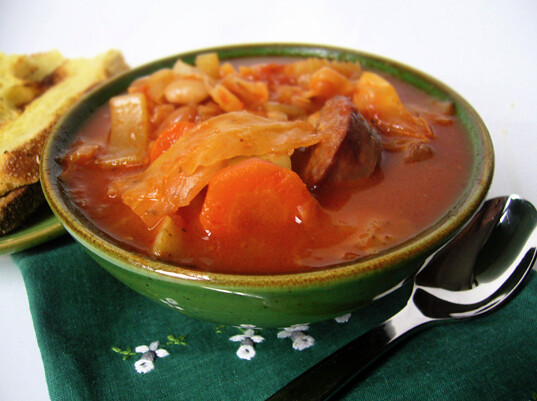 Brian Smith of Apartment Cooking went to the Greenmarket also, to get sausages for a savory cabbage and kielbasa stew. In his post, he recounts missing the homegrown food he’d grown up with now in an apartment in the city, with no outdoor space and windows “that face a brick wall.” Brian, we feel your pain. His spicy stew looks so good that I want to poke a piece of bread through the screen to mop it up.

Finally, Laena McCarthy of Anarchy in a Jar artisanal jams impressed the judges with her Pink Pearl Apple Preserves with Calvados and Cardamom. What? Yes, that’s a pink apple, and Calvados is an apple brandy. Laena and her partner Liv Manifredi’s limited-run jam flavors are based on local produce that they hand-pick themselves. Or sometimes, faraway produce that they hand-picked. Laena actually picked the darn cardamom pods in India for this one! That’s hardcore. She says that this apple jam will be on their fall menu, and you can find Anarchy in a Jar at the new Greenpoint Food Market each Saturday.

Many thanks to all these great bloggers for pulling out the stops with fresh, seasonal and local ingredients for the challenge. I wish that everyone could have won something, but from the sound of it, they must have at least gotten a pretty good meal. I hope more folks get to enjoy them at home, too. Thanks also to the judges for reading each post/recipe and choosing their favorite. These were Angela Davis, Food Education Program Coordinator at Just Food; Juventino Avila, the Chef/Owner of Get Fresh restaurant and market in Park Slope, Brooklyn; and Sam Mason, Executive Chef of Tailor restaurant in Soho (and star of the upcoming show, Dinner With the Band).

If you didn’t score tickets to Let Us Eat Local, please note that it’s hardly the only local food-oriented event hosted by Just Food. Check out their calendar of upcoming workshops throughout the year, and let’s all keep eating local.