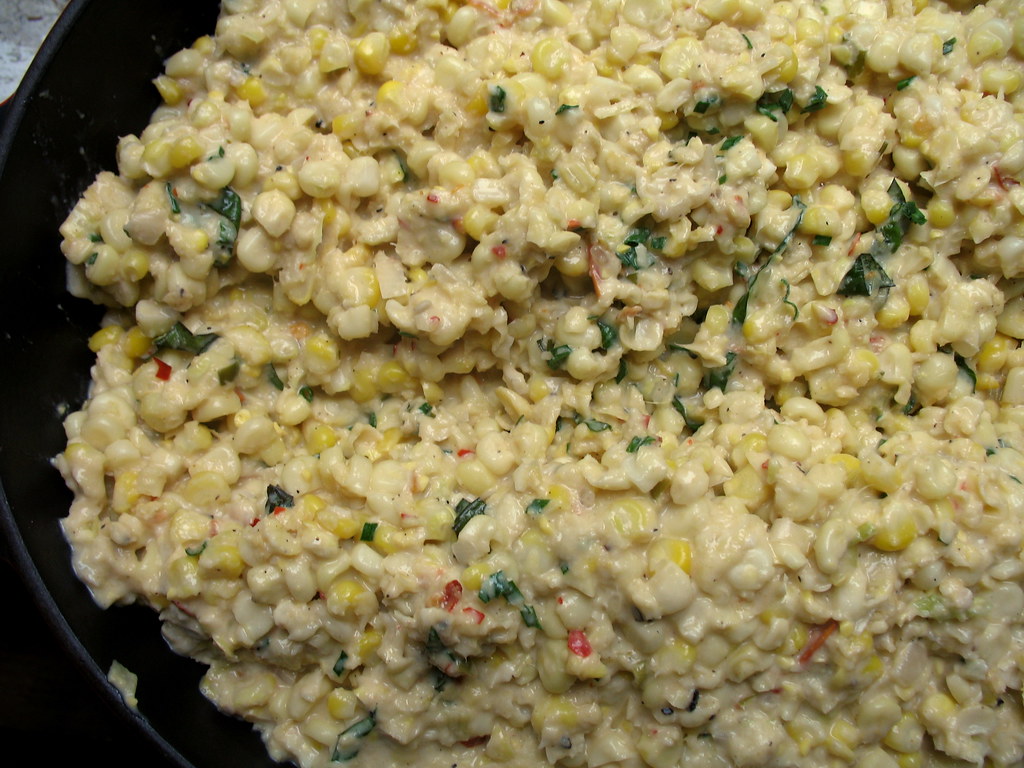 It’s the kind of cook-off that was my dream come true: the emphasis? Local food. The dish’s requirements? Nothing, aside from being local. The judges? Three established food writers whom I admire. The fundraiser’s cause? Slow Food NYC. The location? The sandy Water Taxi Beach in Long Island City, where I’d spread out my toes shoeless on several occasions. So maybe not everything turned out to be really dreamlike: it was raining all day, at some points more furiously than others. But I couldn’t have had a better time, as it was, after all, a feast of local food fun. And to top it off, my Grill-Off dish took second place.

The most amazing part of the night may have been just moments after receiving that award. I was handed a bag of prizes that included cookbooks donated from Martha Stewart Omnimedia, and a gift a certificate to 1 Dominick, the newly established sister wine bar of Jimmy’s No. 43 (who was at the event, grilling up sausages from Flying Pigs Farm). One of these books was the latest favorite of grill-off judge Lucinda Scala Quinn’s (of Everyday Food), I had been told. When I pulled it out of the bag I immediately felt a familiar weight. It was the same cookbook I’d been ogling over the past few weeks, and actually, had inspired one of the main components of my grill-off dish.

It’s called Seven Fires: Grilling the Argentine Way by Francis Mallman, but its rich prose and vivid photos tell so much more than that. With the help of co-writer Peter Kaminsky, the author articulately dispels his sturdy opinions on the art of grilling, flavors and food in general (such as the captivating taste of burntness). After receiving a copy of the book, it’s been on my nightstand, couch and I’m ashamed to say it, bathroom towel rack ever since. I took it up to the roof with a cool drink one sunny afternoon, a few days before the cook-off. There I noticed a recipe in the appetizers chapter for “Humita,” or savory corn pudding. 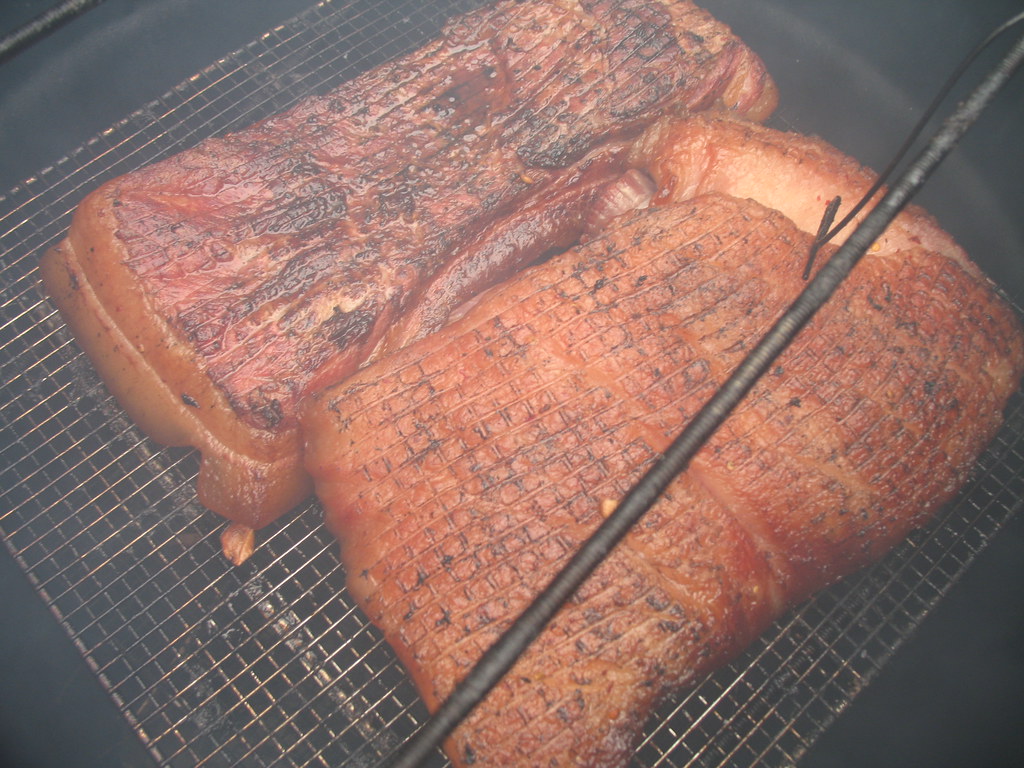 I had been in intense quandary as to what to do for my dish. A few things I knew for sure: I wanted to cure and smoke bacon, to cut into squares. To offset the fat, why not fold them in crisp lettuce wraps? There would have to be something to tie it all together, though. It seems like the newest offerings of the season at market stands are what attracts people most, like the “New in Hardcover” table at bookstores. When something’s just in, everyone suddenly remembers how much they love it. (Sour cherries? That was so two weeks ago.) This was just beginning to happen with corn on the cob. It’s usually later in the summer that we see it the most, but corn had been trickling in discreetly over the past week or so. It’s also a quintessential vegetable for grilling. So my bacon lettuce wraps would feature corn two ways, as shucked kernels of Taiwanese glazed, grilled corn, atop a small mound of savory corn pudding.

It was a simple recipe for the humita in Seven Fires, consisting of fresh, sweet corn, milk, butter, onion and lots of fresh basil. While softening the onions, I added a few small cubano peppers and some just-ripe, black heirloom tomatoes before stirring in the corn kernels for a little more depth. An assortment of garden herbs like chives and oregano accompanied the basil, and I gave it plenty squeezes of lime. The result was a mild, tangy and fresh-tasting “pudding.” I also couldn’t get the mixture to thicken the way I wanted it to, so some fine yellow cornmeal stirred in solved that problem. 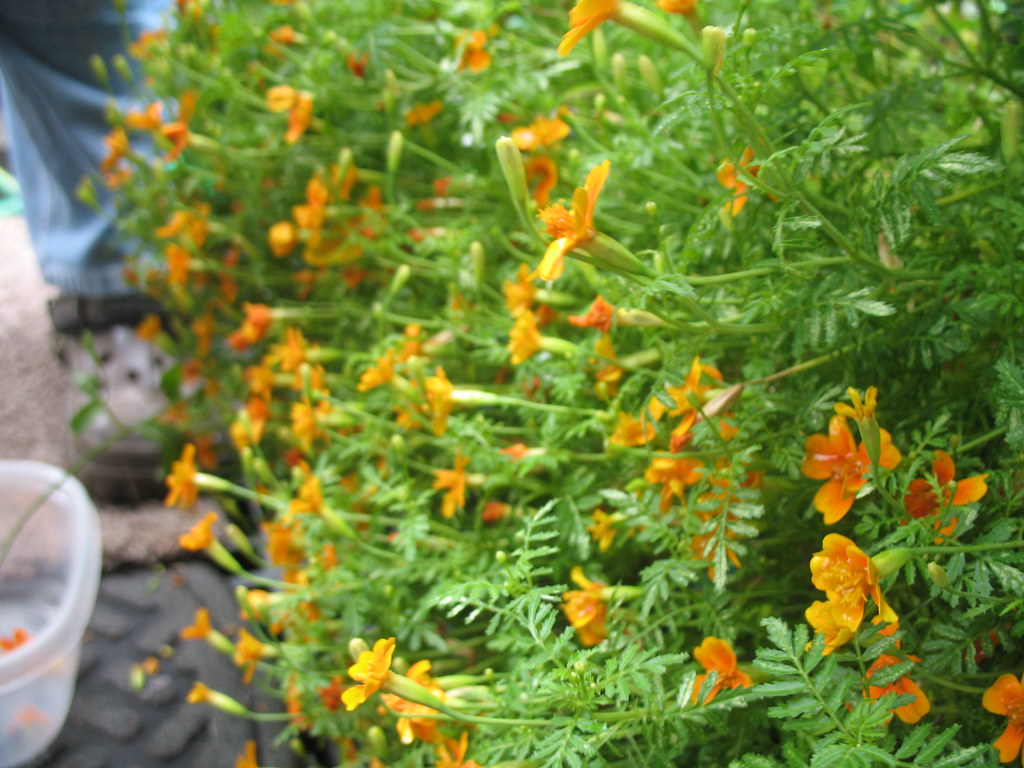 The final assembled lettuce wrap had a slice of black plum (also just in season) on the corn pudding, a squeeze of chile vinaigrette, and edible flora: marigold buds and nasturtiums. These edible flowers are not only irresistibly pretty but they have unique, assertive flavors all their own. The crimson nasturtiums are peppery and a bit garlicky, while the marigolds are more floral and sweet-tasting. Yes, you can really eat them, I found myself saying to many folks. It doesn’t just stop at squash blossoms! And you can find them at market stands this time of the year — I’m pretty sure Windfall Farms always has an assortment of floral garni. (Mine, however, came from Eagle Street Rooftop Farm as well as a friend’s rooftop garden.) 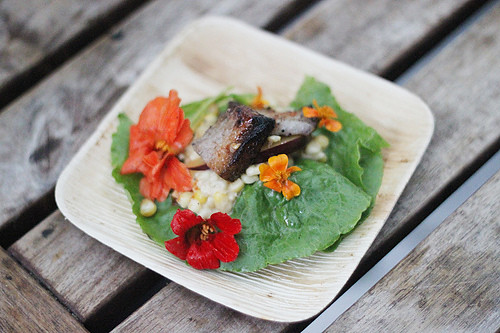 I needed to be pulled back to earth when, about an hour before the grill-off was to begin, I decided that I needed to make a fresh herb pesto as a final touch (no). Even still, this has got to be the most frou-frou thing I’ve ever conceived of, but I’m not holding regrets. There was some pretty high standards from the other contestants, also. Cook-off pros Nick Suarez and Theo Peck (who are planning their next cook-off, the cheese experiment, as we speak) teamed up with a bruschetta of fava bean pesto topped with jerk-inspired bacon and fried shallot rings. A team led by Borough Hall Greenmarket manager Dave Sherman made chunky cubed meat and veggie grilled shishkabobs. Jonathan (J.J.) Proville slathered corn on the cob with a sauce made with ham hocks.

There were only three awards our judges could hand out that night: first, second and third places. Pooling their thoughts, expert foodies Josh Ozersky (of The Feedbag), Rachel Wharton (of Edible Brooklyn and Edible Manhattan) and Lucinda Scala Quinn decided on:

As you can see, a couple other folks had corn and bacon on the mind. But Doug’s bacon was really the star — he’s a pro, and has been grilling with his team, the Ribs Within, for passion and friendly competition for some time now. Way to show us! And yes, Noah B. is on a serious winning streak with cook-offs, and refuses to stop.

Because the event was all about local food, each contestant stepped up to the mic to introduce their dish and tell which farms they got their ingredients from. So, aside from said rooftop farms for the flowers, my corn was from Maxwell’s Farm, via Union Square Greenmarket. Black plums were from Red Jacket Orchards. The pastured, all-natural pork belly, from Mountain View Farm. Basis Farm to Chef is the thoughtful provider who’d hooked me up with their meat, a business that does exactly what its name sounds like — facilitate access to farm-fresh food for chefs. Collecting all that lettuce was an interesting feat. When the Williamsburg Paisley Farm CSA drop-off location found itself with bushels of leftover romaine, I was in the right place and time to take as many as I could hang on my handlebars home. (The CSA chapter has since figured out a way to donate leftover produce to City Harvest, but people foregoing their lettuces hadn’t been a big problem until then.) Then, I scored another hoard of romaine from Garden of Eve farm’s post-market day stash. When the scavenging was complete, I had around sixteen heads. Freeganism!

Melt butter in a heavy-bottomed saucepan and cook the shallots over medium-low, stirring occasionally, until translucent and softened, about 6 minutes. Add the pepper and tomato and continue cooking another 2-3 minutes.

Meanwhile, cut the kernels from the fresh corn directly into a bowl (to prevent them from falling all over the counter), catching any juices. Run the back of your knife across the shorn cob to draw any more juices. Add the corn to the saucepan and stir another 2-3 minutes. Add 1/4 cup of the milk and cook, stirring, until absorbed. Repeat with another 1/4 cup of milk, and the next. Add the cream, and season with salt, pepper, red pepper. If mixture is still very thin, add one tablespoon of the cornmeal at a time until it has reached a desired pudding-like consistency. Add the lime juice, basil, olive oil and optional herbs and serve.