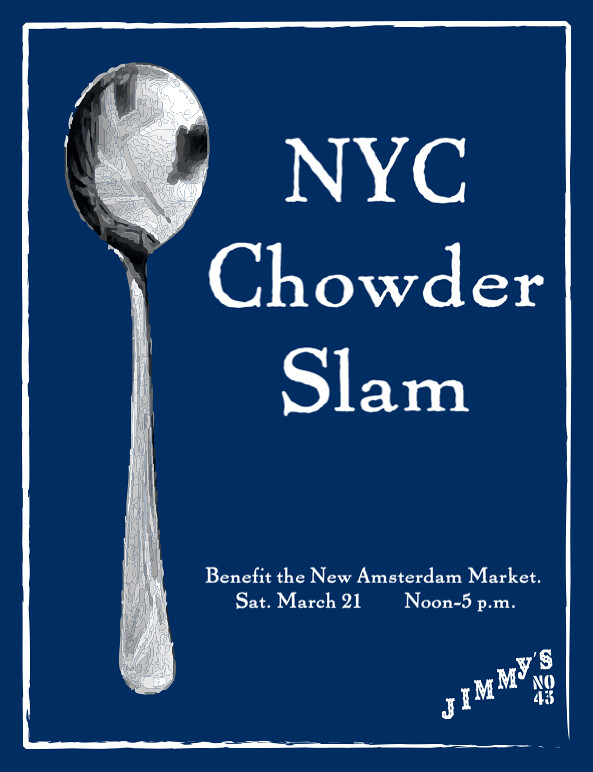 I do love a new cook-off! Tomorrow, a smattering of home chefs will be bringing their best to Jimmy’s No. 43 in celebration of local, sustainable and artisanal foods which New Amsterdam Market vigorously supports, and winter’s favorite soup: chowder. There may be few parameters on what makes a chowder just that, but no one can argue that the best chowders are usually chock full of chunks, every spoonful of the stuff a claustrophobic array of deliciousness. And that’s probably just what the backroom at Jimmy’s No. 43 will be like tomorrow from noon to 5pm.


The “Chowder Slam” is a first-ever cook-off co-hosted by the restaurant and New Amsterdam Market, which all proceeds from the $20 entrance fee will go to. Once in, attendees can try all the chowders and vote for their favorites. I’m pleased to share that the esteemed guest judges who will also be measuring each chowder’s greatness include Lucinda Scala Quinn of Everyday Food! She and co-judge Katie Goldberg, also from Martha Stewart Living Omnimedia will help determine the winner of the cook-off taking into consideration the audience’s votes. Expect four New England craft beers on draft at the bar, in addition to their daily selection of brews, and $4 pints all day. (Drinks are not included with the $20 entry donation.)

Unlike the last benefit cook-off at this bar, I won’t be competing on Saturday. But a bunch of my friends are. I thought I’d pester them for a few teasers about what they’re cooking right now, and why they thought to enter the event. There are several more competitors than listed below, though, so come by tomorrow to get a look at the real deal. Soup’s on!

Why did you enter the Chowder Slam?
I think I was drunk at the time. That, and I love soup with all my heart. Oh, and I think the proceeds go to benefit a local, sustainable foods market. That’s the kind of thing I can really get behind. With soup.

What’s so special about your chowder?
No clams. I know, it’s crazy, but I roll PNW (Pacific Northwest) style and my chowder is made from local ingredients married to salmon that my aunt sent from Juneau, Alaska. It’s a second marriage for both of them, but I really think it’s going to work.

Why did you enter the Chowder Slam?
I entered the Chowder Slam because despite the fact that I love to eat chowder, I’ve never once made it. What better time to start than at a cook-off in front of a hundred people judging you?

What’s so special about your chowder?
I’m taking an old school approach to this project, not reading any recipes that give exact measurements. So, I guess you could say that what’s special about my chowder is that it has yet to reveal itself. It’s as mysterious as the depths of the briny sea… even to me.

Why did you enter the Chowder Slam?
I entered the chowder cookoff because there is nothing more satisfying for the soul and stomach than a bowl of hot chowder, except for maybe snuggling up in one of those Snuggie’s (www.getsnuggie.com) on a cold night. I also have a strong competitive spirit and the only way to appease it is through cooking all day for these competitions.

What’s so special about your chowder?
My chowder has a large amount of bacon and duck fat, two things that make my heart skip a beat with excitement. You can’t go wrong with that.

Why did you enter the Chowder Slam?
I have long thought that soup offers a great platform for cookoffs. I’ve been out of the cookoff circuit for a bit, but when I heard about the chowder slam, it sounded too interesting to resist.

What’s so special about your chowder?
My chowder is special because it incorporates some non-traditional ingredients to achieve what I hope to be a fairly traditional taste with a twist.

Why did you enter the Chowder Slam?
It is a very long story, with many twists and turns.

What’s so special about your chowder?
It is a home-cured lamb belly chowder…

What’s so special about your chowder?
My chowder is yam based — I use 3 kinds of yams, and I also throw in some corn, shrimp and apple, all organic ingredients and a homemade shrimp stock. It’s also a “flexitarian” recipe, meaning that you could easily omit the shrimp and substitute vegetable stock and you’d still have a mean chowder.

The Chowder Surfer in the Rye
Manhattan Corn Chowder