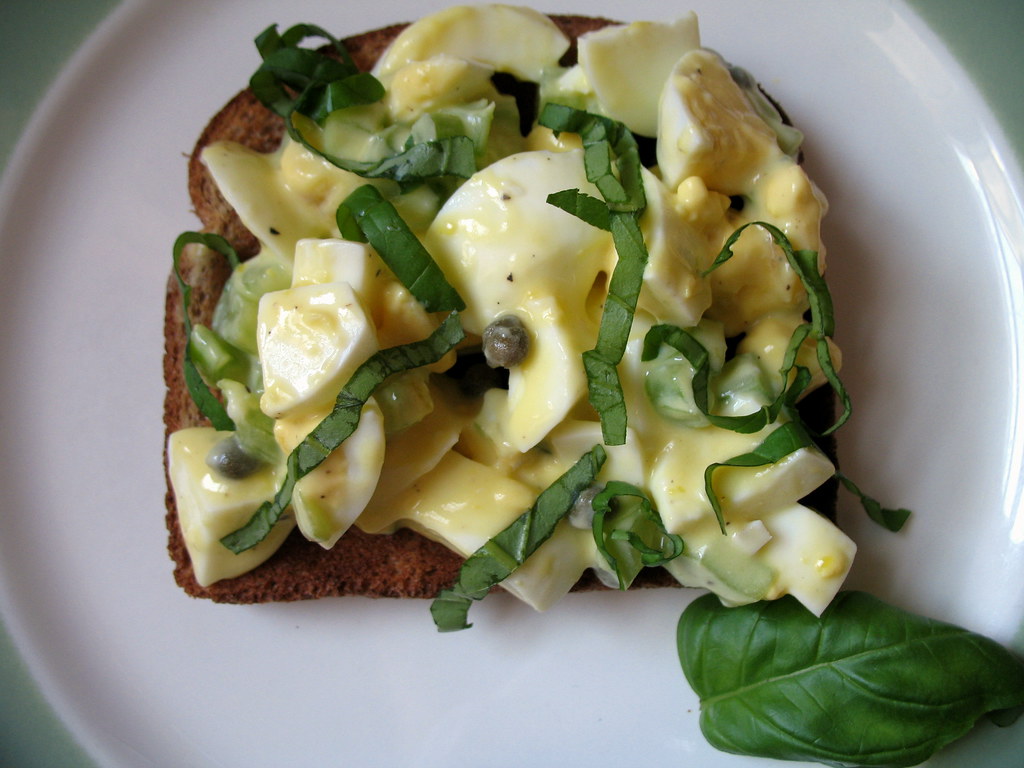 I will preface this by saying that I really wanted this recipe to be lemon and dill egg salad, but I couldn’t find any dill today. Stuff happens. Anyway, when I was chatting with Kate McDonough of The City Cook just before our stint on the Brian Lehrer Show last Friday, she mentioned that among the cheap lunch ideas some of her acquaintances were getting back in the habit of making was egg salad. We agreed that, even though egg salad is unarguably at the bottom rung of the cold sandwich salads, a lot of people seemed to hold it dear. Like peanut butter and jelly, perhaps, the kind of food people love to eat when no one is looking. For better or for worse, this was never the case with me. But I suddenly remembered my former roommate’s fondness for making egg salad sandwiches every month or so, due to unstoppable cravings.


I like eggs, hot, cold, poached, scrambled, sunny side-up and even steamed. Does the way a person like their eggs say much about his or her character? Maybe anal-retentive types tend to freak out when faced with runny yolks, while the extroverts and hedonists like ’em almost raw? Just a hunch. Well, if you had to judge my personality by egg preference, I would be everything, because I like them every whichway. And just because I don’t have a certain attachment to egg salad sandwiches from my upbringing doesn’t mean that I won’t probably love them, done up a little. 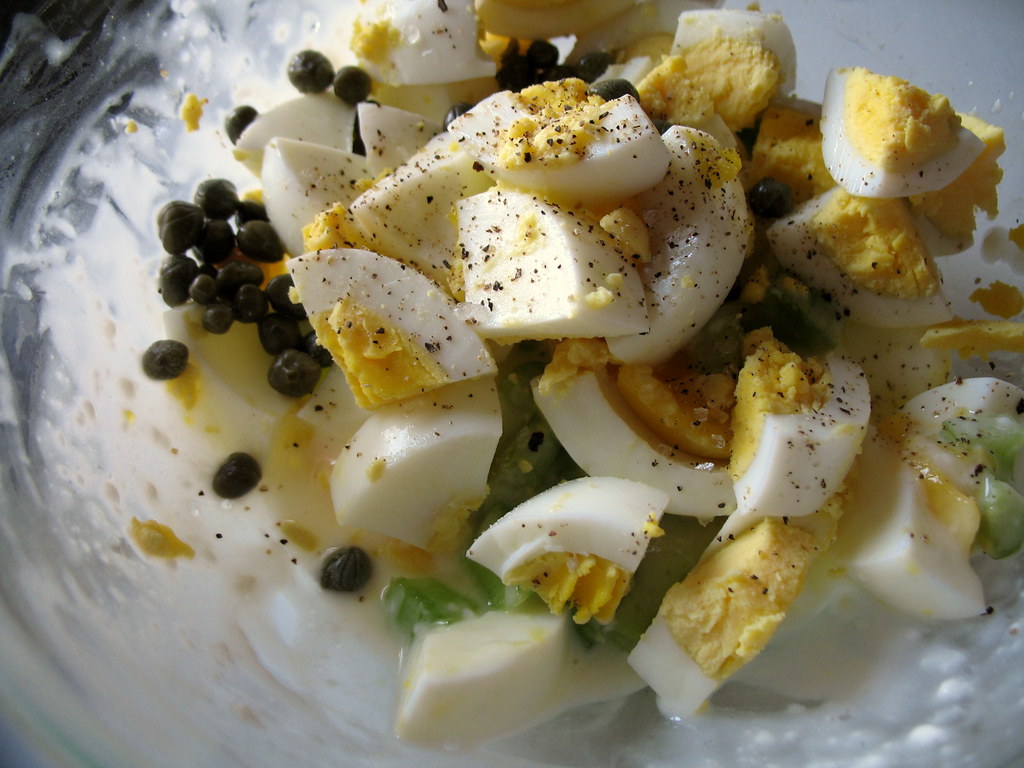 I mentioned my ill-fated search for dill, which you can go ahead and use here at your own discretion. I wasn’t keen on the idea of basil at first, but I had a fresh bunch leftover, and decided to combine their pepperiness with piquant capers. For crunch I added chopped bits of fresh celery to the salad. And of course, lots of lemon. A squeeze of fresh lemon juice whisked into the mayo instantly turned the sorry luncheon salad into something tangy, refreshing and novel. Move over, mustard. 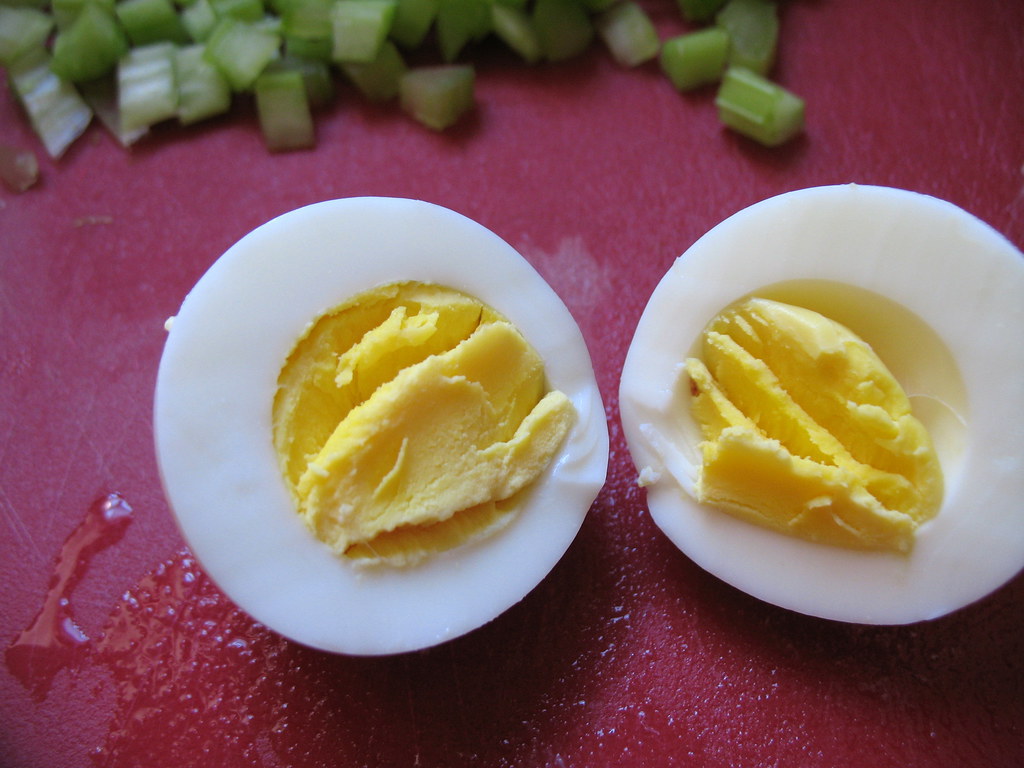 Now, the important part: hard-boiling the eggs. It’s not so difficult once you’ve got a working watch and are willing to follow it. There may be no right way to cook an egg, but if you’re trying to hard-boil it so that the yolk is crumbly, not creamy, you’ll just have to sit tight for twenty minutes or so. I’m used to eating eggs on the runnier side so my first batch was botched when I dunked them in the ice bath too soon. A second trial proved that 15 minutes of letting the eggs sit, covered, in water that it had just been brought to a boil with turned out just the right done-ness for chopping them into egg salad. 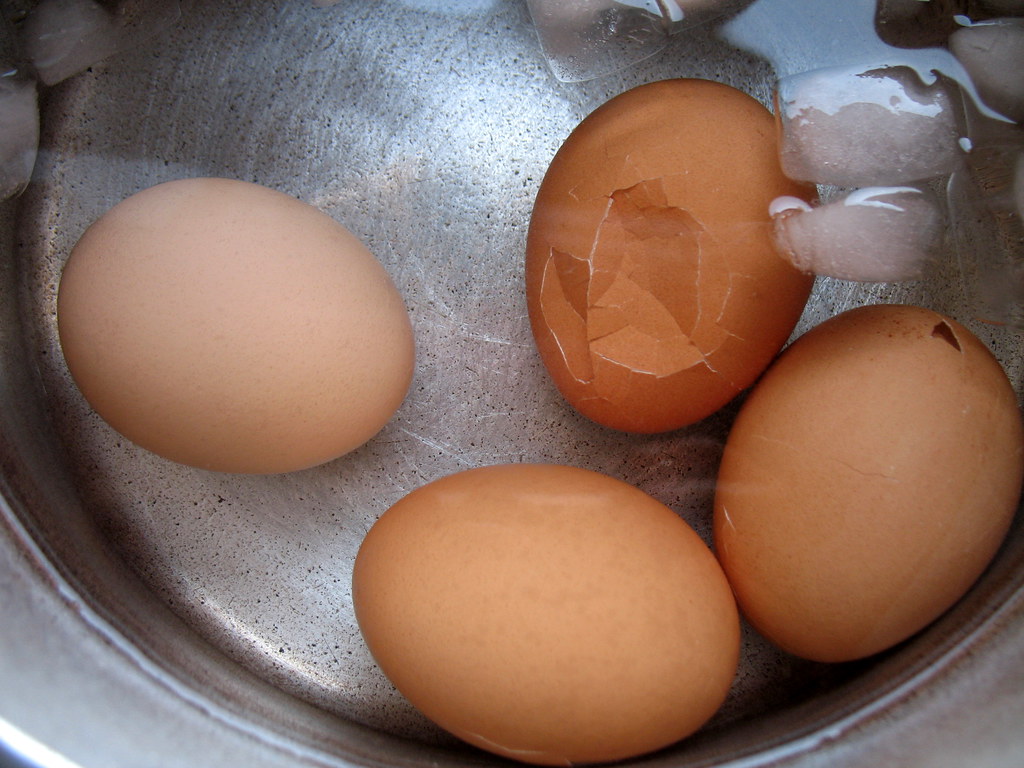 cracking the shells while they cool

One last note of advice, borrowed from the brilliant Jacques Pepin. You’ll be hard pressed to watch more than a dozen episodes of Fast Food My Way without encountering him cooking eggs. I’ve watched Jacques Pepin instruct how to boil eggs so that there’s virtually no sulfuric smell or taste, and no green rims around the cooked yolks. It involves letting air escape by breaking the shells. In one episode, he poked holes in the rounder ends of the eggs before boiling them. Another technique taught in a different episode, which I followed because it seemed easiest, was to bang up the shells right when you shock them with cold water. No greenish tinges could be detected after doing this. 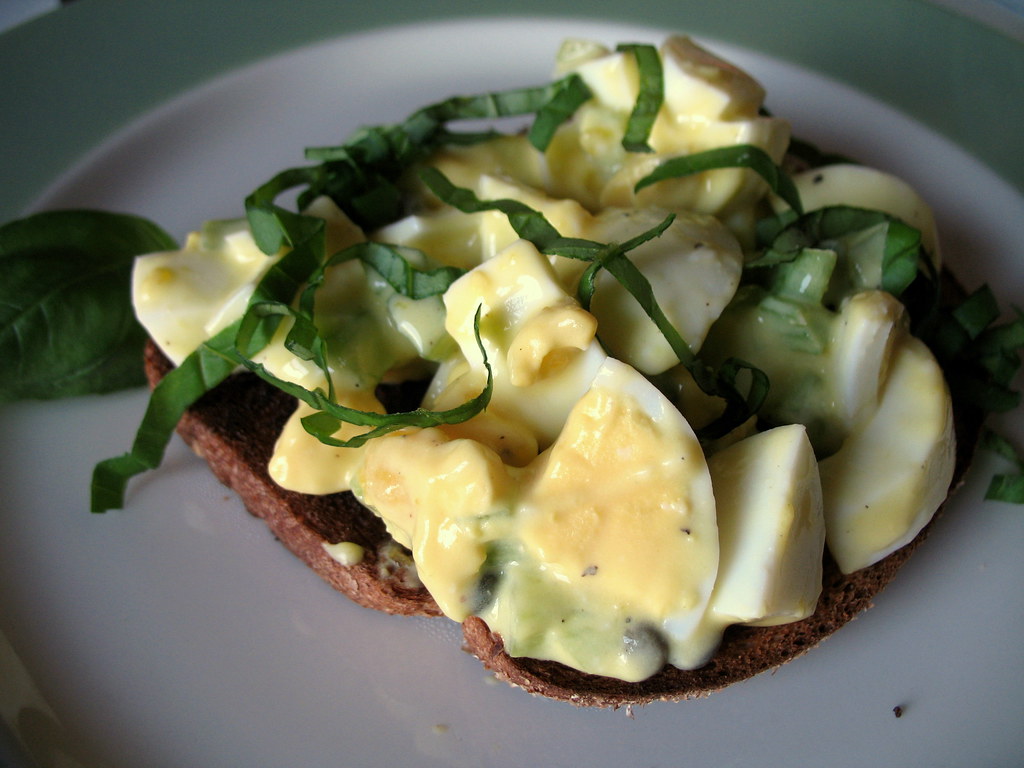 I’m definitely a fan of egg salad after this lunch. Not only is it cheap and healthy — you’ve got proteins, veggies and it goes great with whole grain toast — but it lends itself to endless variations. When bringing it to work for lunch, getting back to my initial conversation with Kate, it’s probably best to keep the egg salad in a separate container, and assemble it on bread just before eating so that it doesn’t get soggy. Lastly, to get the basil into those chiffonades, roll the leaves lengthwise into tubes, cut, and uncurl. It’s best to add this garnish at the last minute, too.

Place eggs in a pot and cover with cold water. Bring to a boil, covered. Turn off heat and let sit for 15 minutes, covered (do not lift cover or else heat will escape). Prepare an ice bath. Drain the hot water and transfer eggs to the ice bath. Bang their sides so that each one cracks a little. Let cool at least 5 minutes. Peel shells off (it’s easiest to do this while holding the eggs underwater). Chop eggs into 1/2-inch or so pieces.

Five brownie points: I’m aware of the constant flip-flopping of eggs — one minute they’re in the favor of dieticians and nutritionists, the next, they’ve got way too much cholesterol (resulting in wasteful egg whites-only fads). Well, they do have cholesterol, but as long as you’re eating it with fresh veggies, lemon and whole grains, not bacon, there’s your healthy allotment of it for the meal. You can add whatever veggies you like to this sandwich in addition, but celery is a cheap and surprisingly (to some, at least) nutritious vegetable, despite its pale hue.

Three maple leaves: For this salad I merely combined some eggs with a bit of celery, basil, lemon and mayo. As I’m sure many of you know, the quality of eggs, its richness and flavor, is greatly affected by the chickens’ diet and lifestyle. If eggs are the star of the dish, all the better reason to get good ones. Unfortunately, I was working off of a dozen of store-bought, cage-free ones that weren’t particularly dense, not like ones I might have found from a small farmer selling at the Greenmarket, perhaps. Celery is out of season, as much produce is now locally. But the basil was grown in a hothouse and sold by one Greenmarket farmer stand on Wednesday.