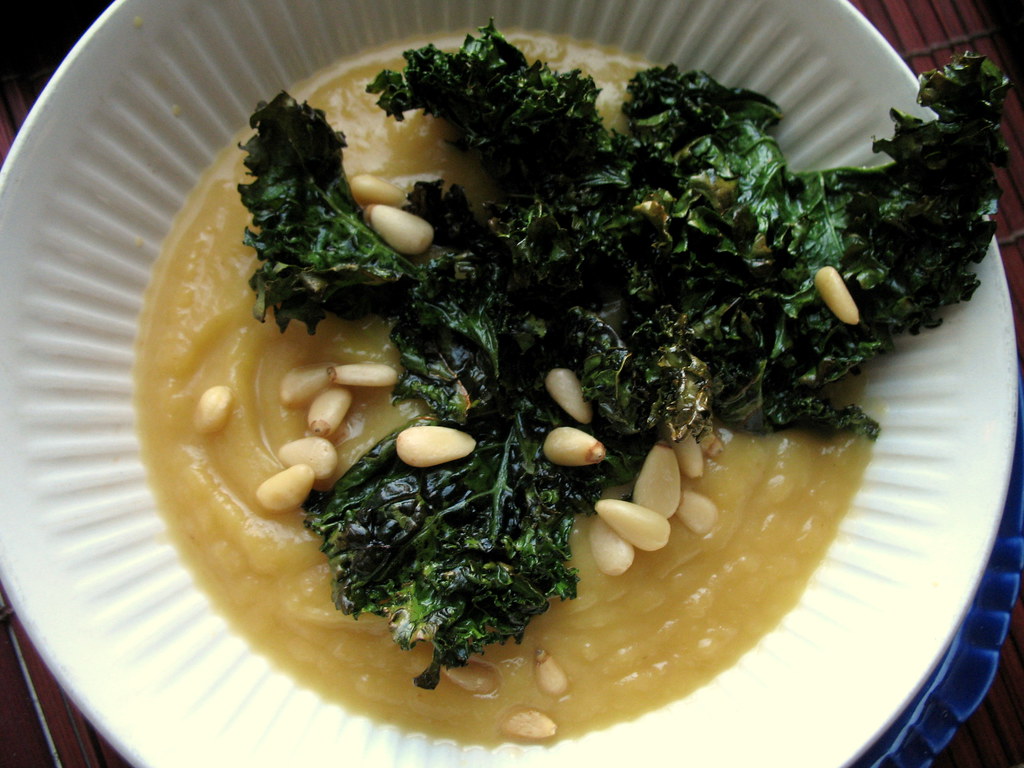 It’s not what’s inside the soup that counts. It’s what’s on the surface. Here, we’ve got creamy roasted acorn squash soup. It could be any squash, butternut, pumpkin. It could have a splash of cream or milk or not. I don’t care. I’m sinking these crispy, salty kale “chips” into its sweet custard and lodging a pebble of a pine nut onto a spoon for the ultimate scoop. Call me shallow, but sometimes beauty just isn’t that deep.


It’s mid-February, and I’m almost at the end of my rope with winter squash. I should note that most of the time, I opt for an enormous orb of fleshy butternut, or stringy spaghetti squash. And then I have a lot of squash to eat throughout the week (it seems odd to leave cleavered quarters of a single squash in the fridge for long). Food that generally comes in sizes bigger than my head can be a bit of a puzzler, exacerbated by the fact that I live alone. Luckily, acorn squashes from the Greenmarket come in quite a variety of shapes and sizes, though if truly acorns, they would all be in the Giant Land level of Mario Bros. 3. 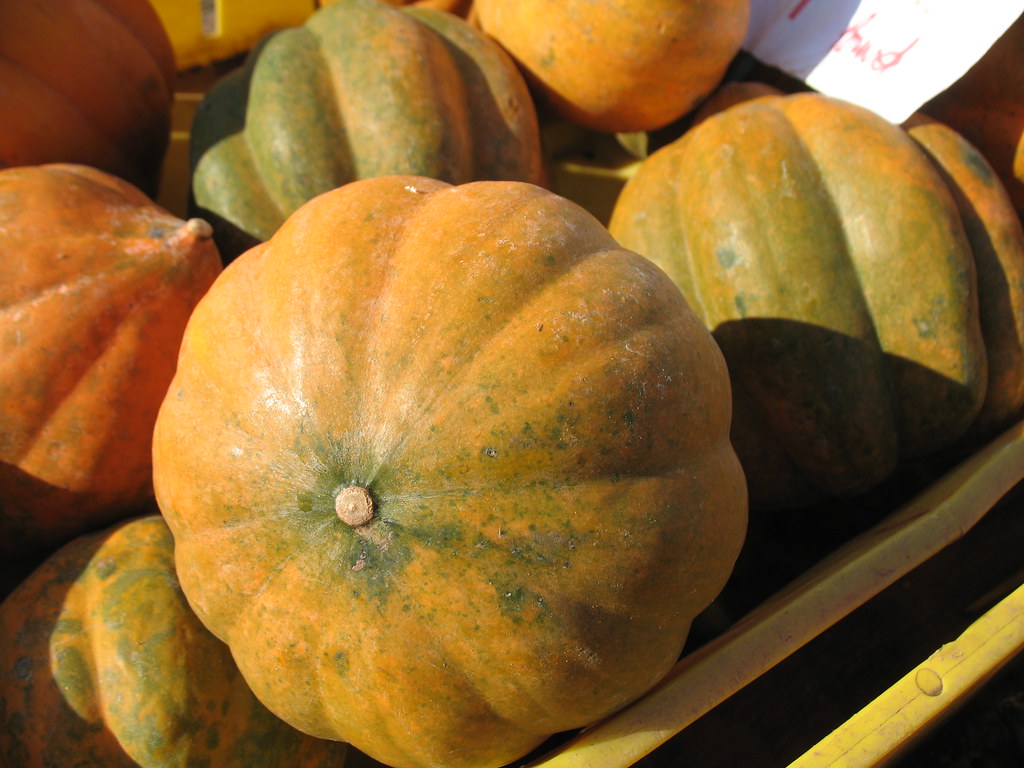 I grabbed the smallest squash I could find for my sole consumption. Picking the heaviest one for its size (they’re fresher), I figured I had in my hands a single-girl portion of squash soup with the beautifully ridged, round specimen, with an orange and green-speckled skin. 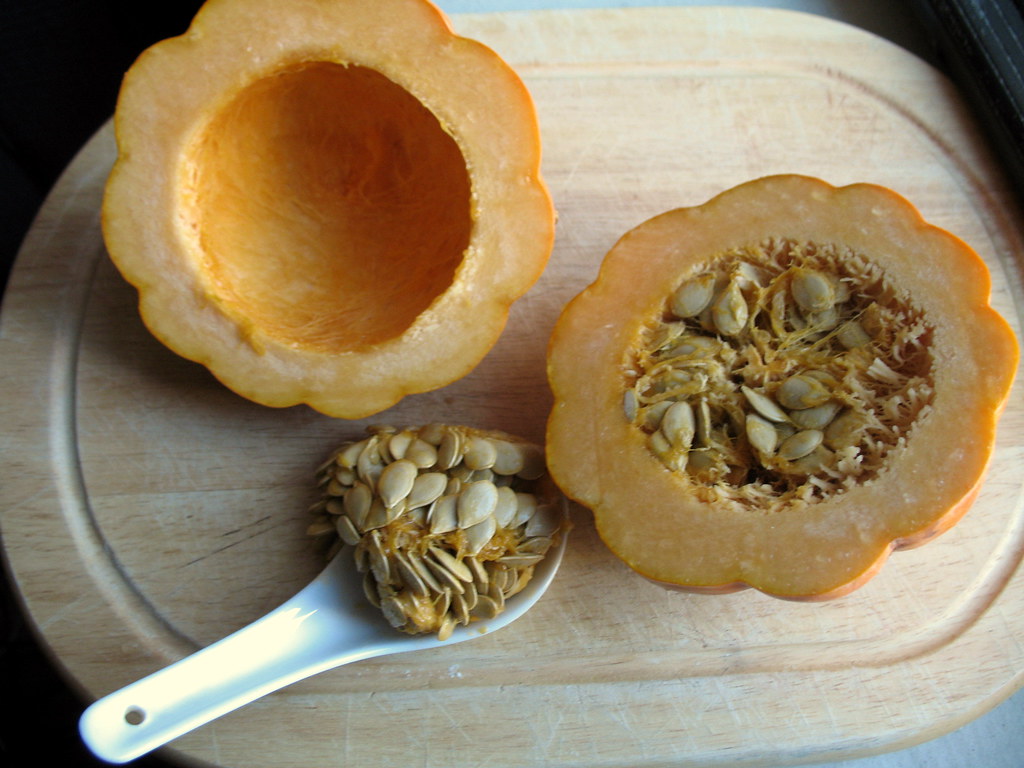 The seeds were scooped out for an earlier use, as a brown sugar-baked topping for my last Chili Takedown recipe. Had I still had those, I’d never have thought to sprinkle the top of my bowl of soup with pine nuts instead. But here we are now, and baby, I’m so glad. Halved, the squash went face-down onto an oiled baking tray and into a 400-degree oven for a little less than half an hour. This audibly and odiferously caramelized the bit of flesh that met the scorching metal of the tray. Again, surfaces are everything. 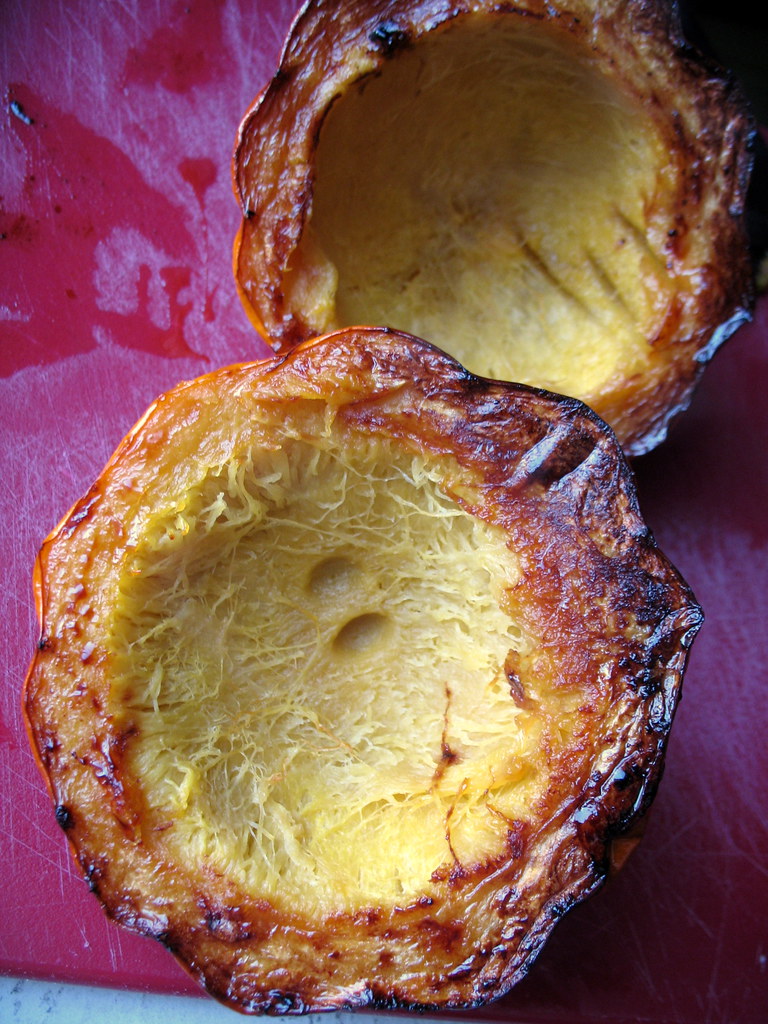 These gooey bits were all scraped up along with the rest of the softened squash, leaving behind rubbery flaps of skin. Mashed up and mixed with a bit of broth, this was essentially our squash soup.

Back at the Photojojo Food Safari, my friends and some of my favorite kitchen fellows, Mark and Michael, served up these batches of what they called “oven-fried kale.” Trimming the curly kale greens to potato-chip size, these were tossed in some oil and baked at a very high temperature until charred in parts. We were all so busy bumping elbows around the oven that day that not all the batches came out very crisp and light. Since then I tried it again in my own space and time and was delighted to find how easy it was to produce something that very much resembled a “chip” with kale. Once cut down to size, it starts with a very thin drizzle of olive oil, and I sprinkled coarse sea salt on the leaves. Spread out in a single layer on a pan, these roasted at 500 degrees for one or two minutes, then after a careful shake or flip with tongs, another couple minutes at the most. And out they came. Completely stunned, frazzled and, yes, “fried” by such heat, the dense green leaves all but evaporated into highly concentrated, almost seaweed-savory morsels of crispiness. Move over potato chips, croutons and soup crackers, or “Veggie Booty” snack things. 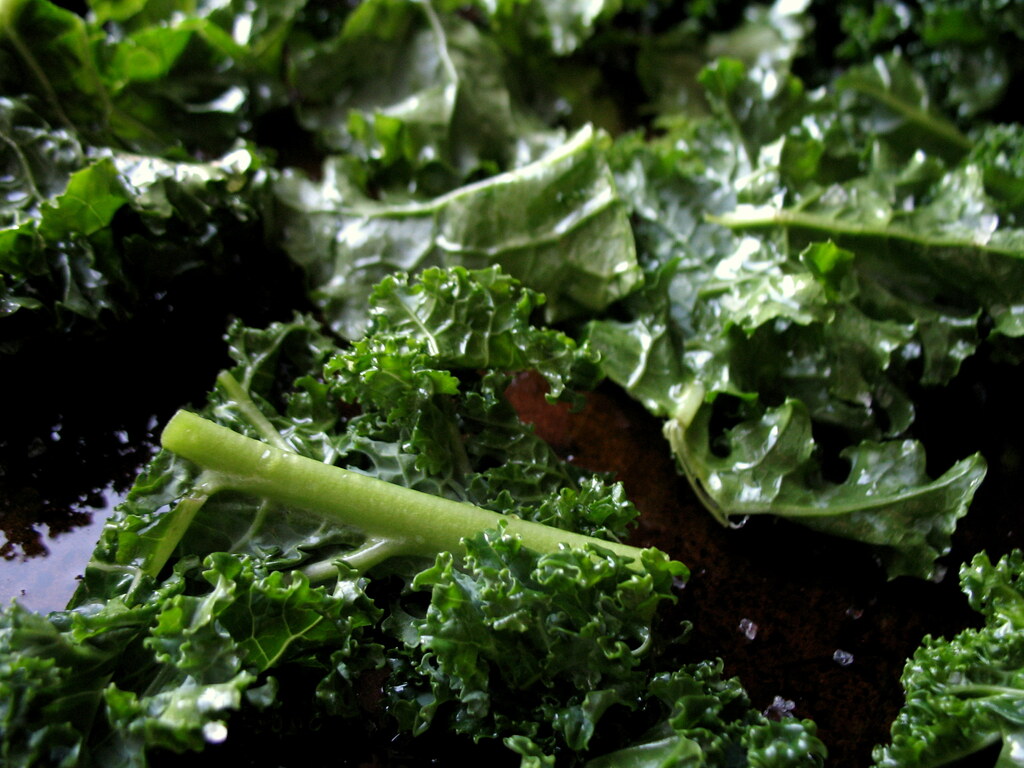 fresh kale is sprinkled with sea salt and scorched 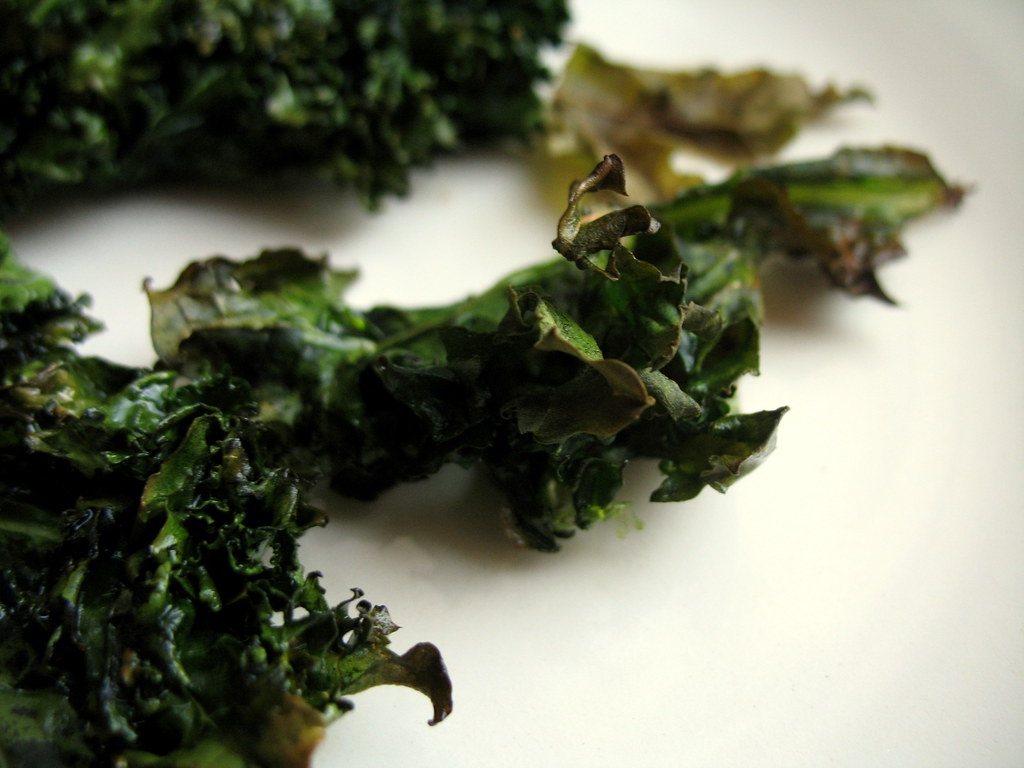 I suppose that’s the long-winded story to one uncomplicated bowl of soup. Something tells me I’ll be making this, or at least the different components of it, again and again.

Preheat oven to 400 degrees. Slice squash in half lengthwise. Scoop out seeds and discard or reserve for another use. Grease a baking tray with a tablespoon or two of the olive oil and place squashes cut side-down. Roast for about 30 minutes or until the squash is tender when poked (depending on size/shape of your squash). Let cool completely. Scoop out flesh from the skins and discard skin. Combine the squash with the vegetable stock and process with a hand blender or by transfering until smooth. Bring to a simmer in a medium pot and season with salt and pepper to taste, adding the optional nutmeg if desired. Once seasoning is correct, add the milk or half-and-half and heat through completly.

Preheat oven to 500 degrees. Toss the kale pieces with about 1 tablespoon of the olive oil and a sprinkle of coarse salt. Spread across a baking tray in an even layer and bake for about 1-2 minutes, or until loud crackling is heard. Carefully rotate the kale with tongs or by shaking the pan (carefully, it’s hot!). Place back in the oven and cook another 1-2 minutes, or until some pieces are just browned. Let cool. Top the soup with a handful of the kale chips and a sprinkle of the pine nuts.

Two brownie points: Fantastic. The soup alone is a very light, barely touched puree of pure squash, flavored mostly by its naturally occurring sugars when caramelized. Vitamin-heavy kale replaces greasy, carby croutons on top of this bowl. And just a sprinkle of protein-rich, yet saturated fatty pine nuts can’t harm much more than its delectable flavor and texture helps.

Five maple leaves: Fresh kale is no longer in season locally, but I’m also almost at the end of my rope with winter cabbage. We’re approaching the cruellest month for fresh produce at the Greenmarket, but at least squashes are still plentiful for the time being. Expect much ado about potatoes pretty soon.