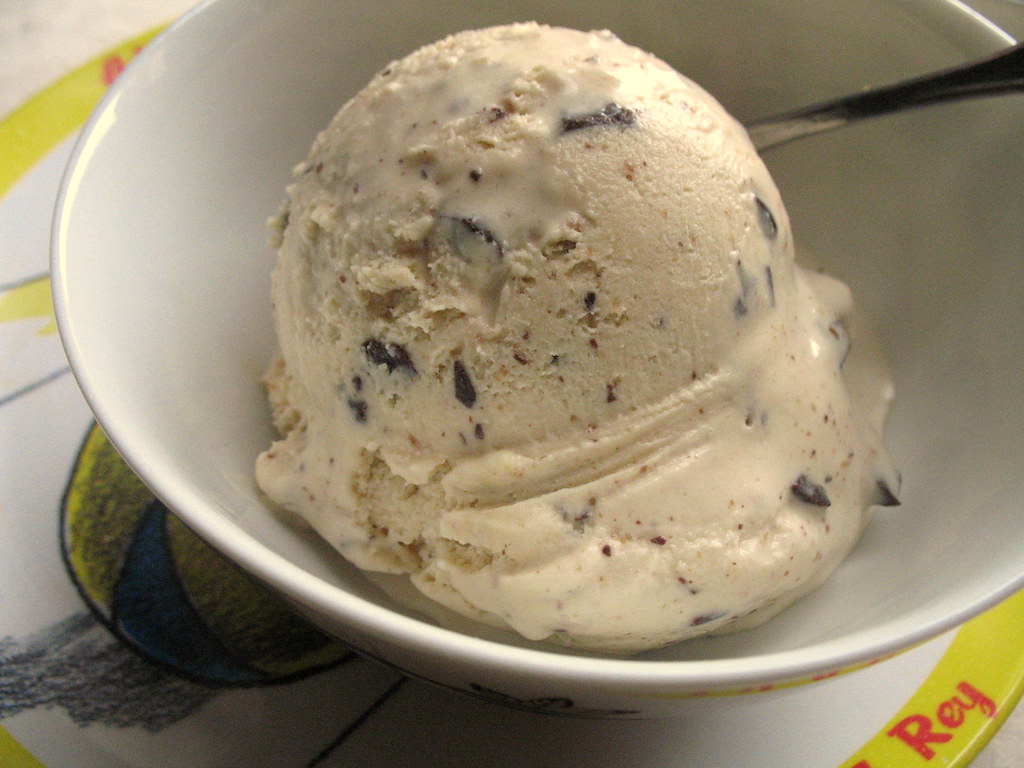 Two winters ago, I bought myself an ice cream maker. It cost $50. It has a bowl that needs to stay in the freezer overnight before attempting to use it (trust me, I’ve tried without), and it has a plastic insert that churns the cream into ice cream when the electric motor rotates the bowl around and around. It’s a simple machine, and it’s pretty cheap. And I honestly don’t know why everyone who likes ice cream doesn’t get one!


I had a honeymoon period with this thing during the first year or so of owning it. Not to rehash too much for anyone who was there and read those posts, but there were ice creams with root vegetables, liquors, fresh coffee, basil and mint. Tangy frozen yogurts and fruity sorbets. Not blogged about were plenty of batches of good old vanilla bean, chocolate, Melissa Clark’s strawberry sour cream and brown sugar ice cream. There was a string of green tea, Earl Grey and Chai ice cream making. Then, I turned my attention to newer kitchen toys like the pasta crank while leaving the ice cream maker on the dust-coated cabinet top. But in that heat of passion, I never thought to try one of the most delicious flavor combinations known to mankind with it: peanut butter and chocolate.

Then, over the holidays, a happenstance binge with a bag of mini Reese’s Peanut Butter Cups left out on the office kitchen counter triggered my lust for that delightful combo in frosty form. 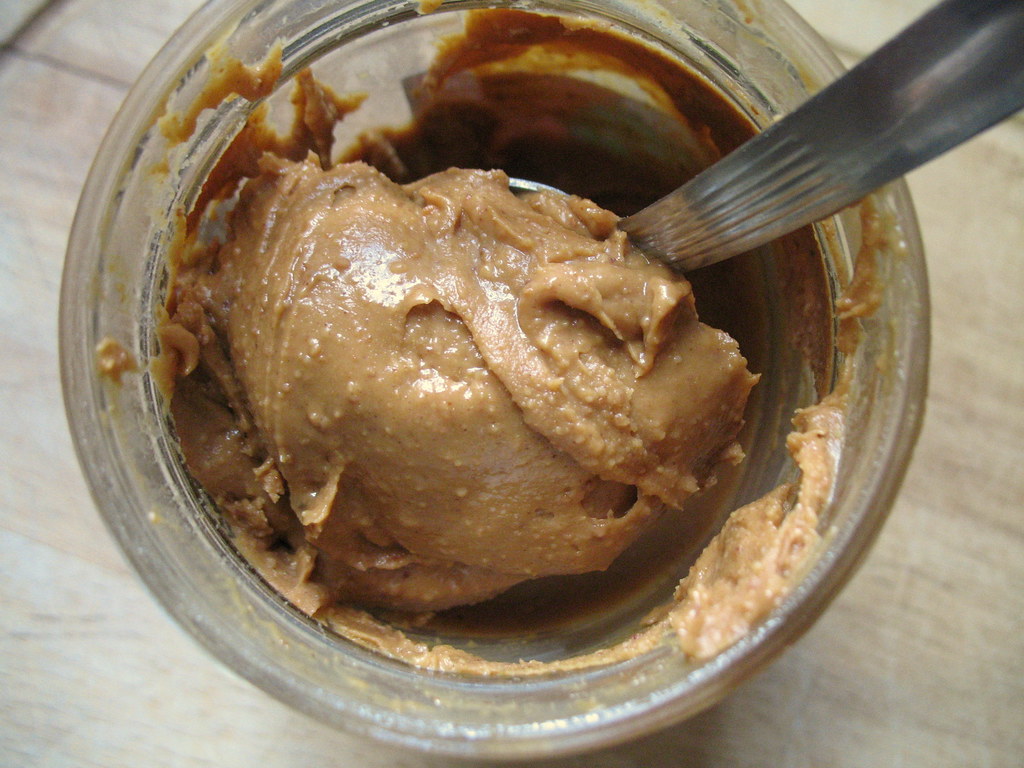 I’m a fan of natural peanut butter, which doesn’t have the emulsifying agents that keep the oils from naturally separating from the solids. This might sound like a problem, a layer of peanut oil on top when you open the jar. But once you stir it, and refrigerate it, they stay where they’re supposed to be — mixed in! I prefer natural simply because most brands that sell it tend to use less sugar than the brand names I grew up with (Skippy, Jiff and Peter Pan), and it seems to have a more prominent roasted peanut taste. I usually get Trader Joe’s natural peanut butter since it’s so cheap, but recently bought a jar of Smucker’s and am loving the rich flavor and slightly grainy texture of the creamy version. (Making peanut butter — now that might just be the next DIY quest!) 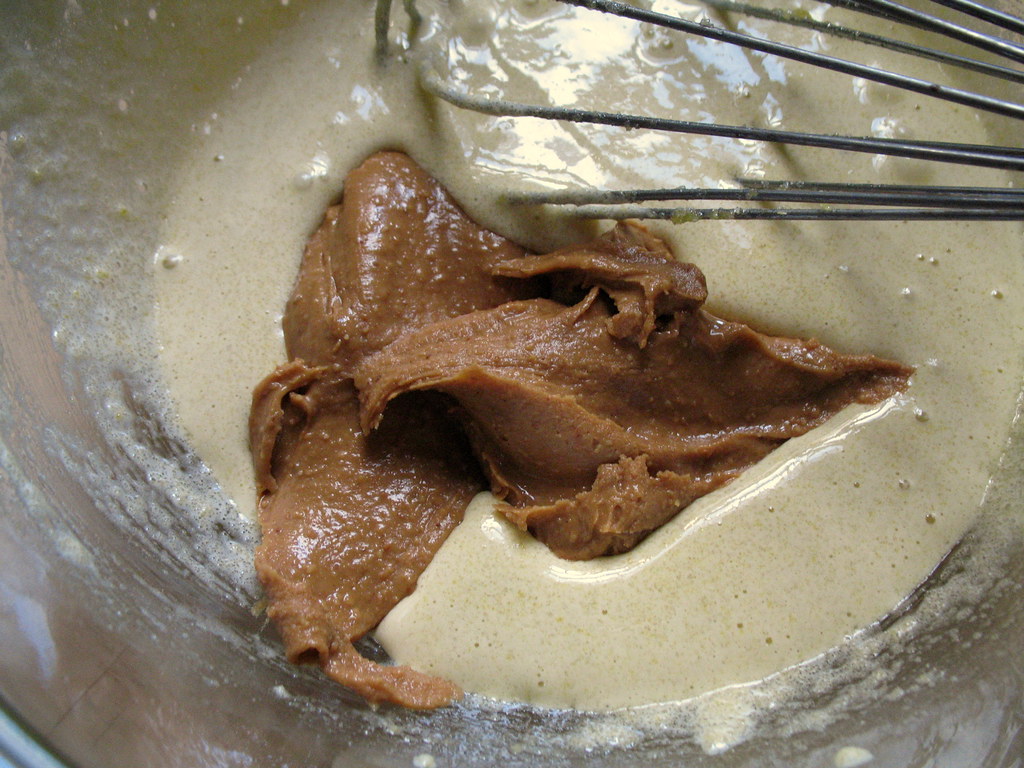 peanut butter gets whisked into the egg yolks and sugar 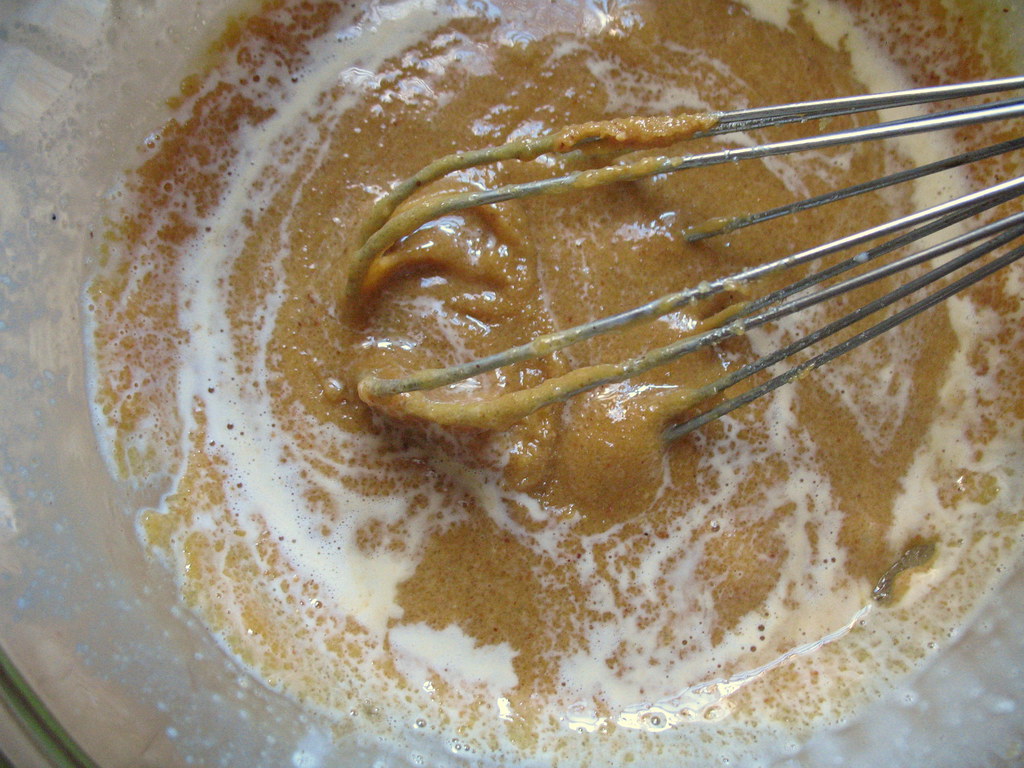 and the heated cream and milk tempers the custard

There really is nothing else to peanut butter-flavored ice cream than adding some peanut butter to your favorite ice cream base. Mine incorporates a few egg yolks, a lighter touch of sugar than normally suggested, and in this case, I used light brown sugar which I thought would go nicely with the peanut butter. Dark chocolate chips, or rather, chunks and shaved bits from a nice bar of it, went into the ice cream maker during the last churn or so to provide the classic chocolately component. I like getting a surprisingly big chunk of this in a bite and having my mouth temporarily consumed with potent dark chocolate. 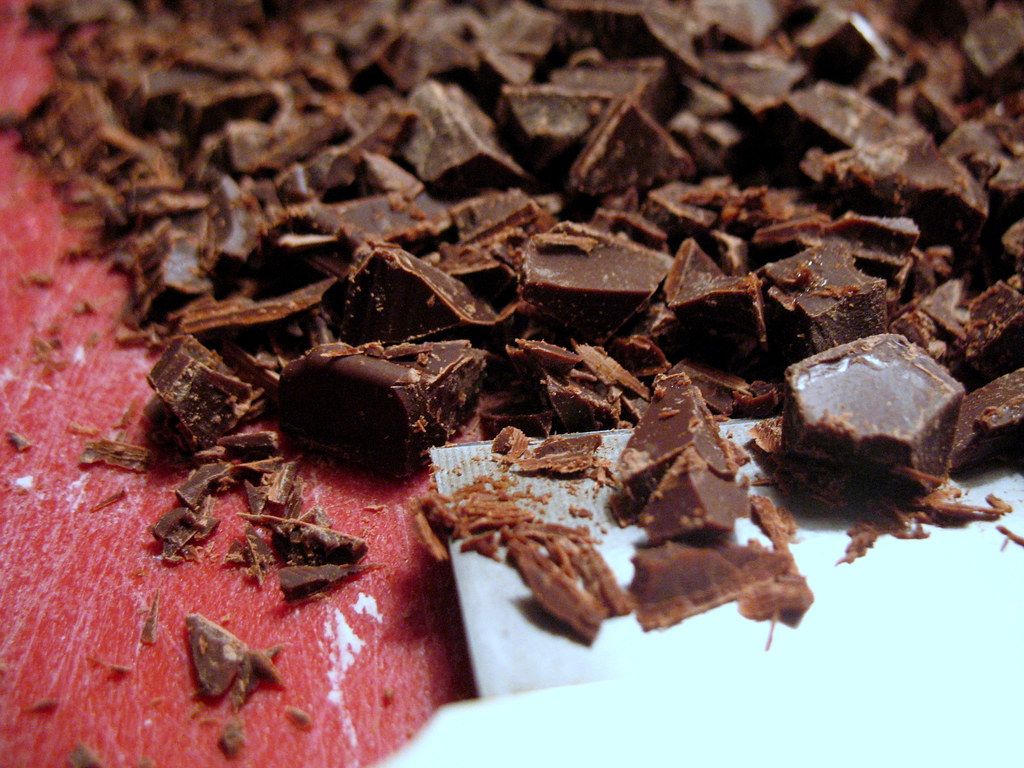 There is another legendary flavor duo, at least for ice cream, that I haven’t dabbled with yet. It’s butter pecan. I love this flavor and will probably try it out sometime soon, maybe roasting the pecans in a caramely crust first. Also, this month only Ben & Jerry’s is renaming the flavor “Yes Pecan,” describing it as “Amber waves of buttery ice cream with roasted non-partisan pecans.” And they’re donating proceeds from every scoop of it sold in its stores to the Common Cause advocacy nonprofit. Inspirational? In more ways than one.

Lastly, in case anyone was wondering, the plate beneath the ice cream bowl in the top photo is the Curious George plate of my pantry — for some reason, peanut butter and Curious George just seemed to go together.

Beat sugar and egg yolks well until fluffy and pale yellow in color. Gradually beat in the peanut butter until smoothly incorporated. Meanwhile, heat the milk and cream in a medium-large saucepan until it just begins to boil. Turn off heat.

While whisking the peanut butter, egg yolk and sugar mixture rapidly, pour in a spoonful of the hot milk mixture. Add another spoonful while whisking, and another (this will cook the yolks, or temper them, evenly). Once you’ve added about half a cup of the hot milk while whisking, transfer it into the saucepan with the rest of the hot milk and cream. Cook, stirring, over medium-low heat. Once custard is just thick enough to coat the back of a spoon (about 6-8 minutes), remove from heat. Let cool, and refrigerate at least 4 hours (or overnight) to completely chill it before putting it into the ice cream maker. Follow your ice cream maker’s instructions to make ice cream, and in the last minute of churning, add the chocolate chunks. Transfer to an airtight container and freeze 2 hours to let it “ripen”; alternately, it can be served immediately at a softer texture.

Nine brownie points: Eat in moderation, and it’s best to consult your hungerness factor before each use. If you could eat a horse, I might recommend doing that over opening a tub of this peanutty, buttery, chocolately, creamy goodness. America’s peanut farmers have been doing much in the way of marketing in the last decade, as if we didn’t know nuts had protein. There are many surprising health benefits to peanut butter, but just keep in mind that this food is mostly a fat.

Five maple leaves: There isn’t much to say for the ice cream ingredients that hasn’t already been said before: the dairy and eggs can be bought locally from farms with environment and animal-friendly values, so that’s always the best start. Organic peanut butter and chocolate are common creatures of the supermarket these days, and though I didn’t have either of these this time around, these options as well as fair trade chocolate are widely available.