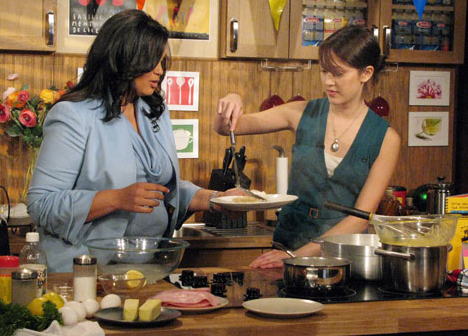 What’s going on here?? Let me back up a bit. Last year, I contributed a recipe for a project by the non-profit organization the Neighbors Project, called Bodega Party in a Box. The idea behind the ‘box was to promote shopping within one’s community, and to put more fresh produce and healthier foods on the shelves of local corner shops by increasing demand for it. There’s a lot more to the project on the organization’s website. But from a local perspective, big supermarkets are dropping like fleas throughout Brooklyn and Queens, and in low-income neighborhoods especially, quickie convenience stores (aka bodegas) are the only places to buy food for several blocks. The need for better food in them is urgent; and the Neighbors Project’s incentive more timely than ever.

So when a producer for the morning news show on WPIX/Channel 11 contacted me to see if I would do a cooking segment based on a recipe in the Bodega Party in a Box cookbook, I couldn’t help but accept. I didn’t organize this project, nor do I work for The Neighbors Project, so I’m not really sure how they came to me first. In fact, I’m still a little in disbelief that I was on TV this morning. But, after deciding on a recipe that I would make on air, and getting some preparation on a three minute back-and-forth with the show’s hostess, it appears that I really was on television. And to prove it, I still have cakey make-up on my face.

Instead of choosing the recipe I submitted for the actual cookbook, I decided to cook a more fitting morning-show feast. It might not occur to most people that ingredients for the classic breakfast indulgence and darling of brunch restaurant menus, Eggs Benedict, could be purchased from any old bodega. But it really equates five ingredients: eggs, butter, sliced ham, a lemon and English muffins, and who can’t get those at their local quickie mart? Alright, maybe the English muffins aren’t to be found everywhere, and this is the problem I ran into when I dashed out of my apartment at 6am this morning, to catch my call time. Nobody had English muffins in my immediate ‘hood, on the way to the subway station. So instead I picked up a pack of round, flat rolls called Bulla cakes, a Jamaican specialty (my neighborhood of Crown Heights, Brooklyn is predominantly Caribbean). I was going to use those instead, but the producers had to make a run for extra ingredients anyway, and picked up the traditional bread du Benedict while there.

Extra-special, big, hearty, heaping thanks to chef Akiko Moorman, who came along to prep and style all the ingredients before the spot. I think she pretty much made everything that was seen on air. (Akiko’s launching her own food blog in about a week, which I’ll link to soon.) And thanks to all the great people at the Neighbors Project for letting me be their spokeswoman for a day (or three minutes). It was a fun turn behind the camera. My only regret is that the clip featured on the station’s website doesn’t show the part when the anchors signed off, and the entire news team was crowded around me holding plates of Eggs Benedict. I wasn’t expecting this scene to take place, and probably looked like a weirdo standing in between people who all had so much makeup on that, close-up, looked like mannequins to me. In any case, good morning New York, and happy home-cooked brunching!