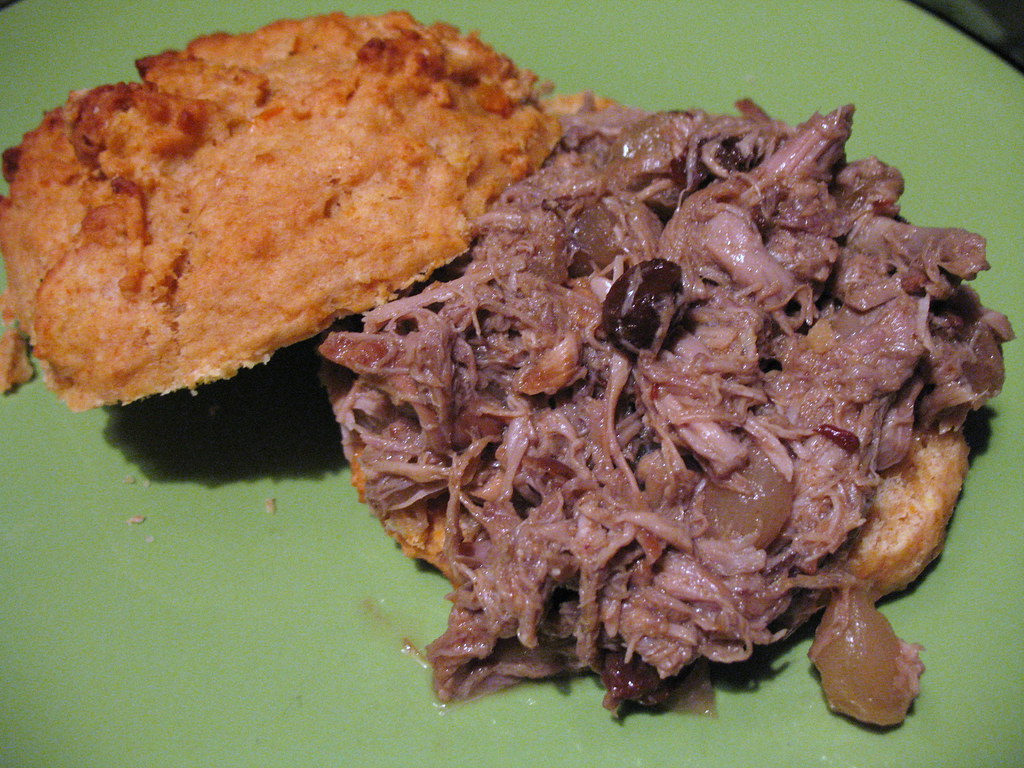 Did someone say “Christmas goose”? It seems to be echoing in the minds of many this time of year. But as Tom eloquently warns, it’s not always the home cook’s best call (listen to this guy – he’s a butcher). My mom will not let my dad forget the Christmas when he, spurred by Dickensian nostalgia, tried to cook a whole goose. I was very young then, but remember the epic disaster: rivers of fat, long delayed dinner time, and the taste not being worth a dime in anyone’s estimation. So why this precautionary tale about goose when the strange bird in this recipe evidently is not? Well, a small part of me would like to right the wrongs of the past, and cook a goose. But first, it’ll be helpful to get better acquainted with its diminutive cousin, duck. So here’s my second stab at cooking the quacker.

According to the guests this dish was served to, it was the best use of the “not-so-strange” birds from D’Artagnan. So I saved the recipe for the finale of this series of posts. It’s not much to look at, I’ll admit. I tried to butter up the plate appeal by adding some small pearl onions to the braise and exposing the juicy stewed raisins for the shoot, but photographing the finished dish was my biggest challenge, thanks to being in someone else’s home who was gracious about pouring the wine. To my luck, someone else brought homemade sweet potato biscuits to the party, and these not only elevated the meat from a sodden pile on a plate but were delicious to eat with as a sort of sandwich. 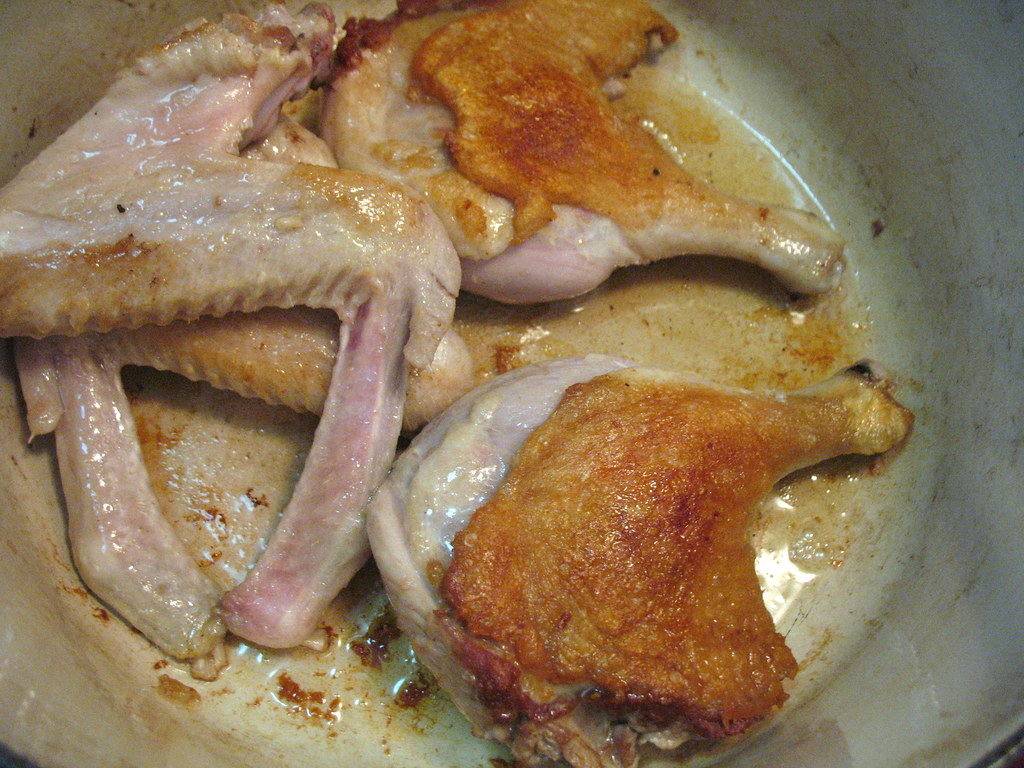 I began by browning the legs on both sides with their skin. The duck I was working with was a whole Pekin duck, which meant that it had wings and everything but the head (the butchered carcass was also not a pretty picture). I decided to toss in the wings and eventually shred what meat could be salvaged from them. 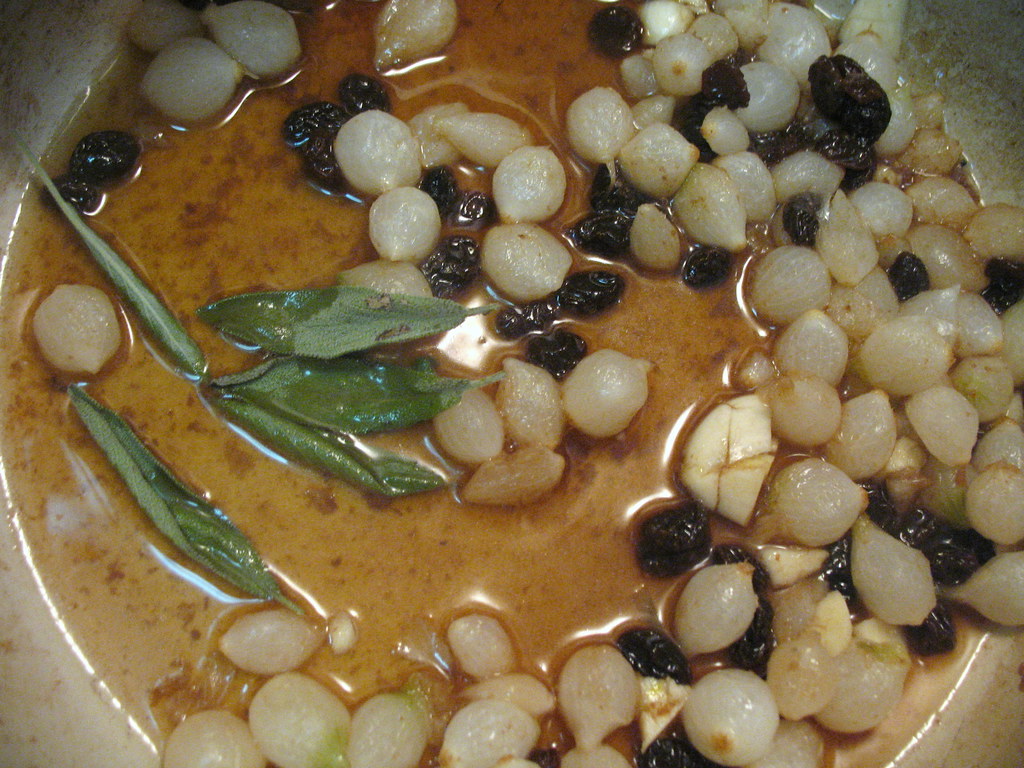 The duck’s dark leg meat is game for many flavors to enhance its natural funk. I went with a sweet, fruity twist by drowning it in apple cider and leaving it to braise a few hours. But first, I added pearl onions, raisins, garlic and sage to the same pot used for browning and deglazed it with some sweet sherry wine. 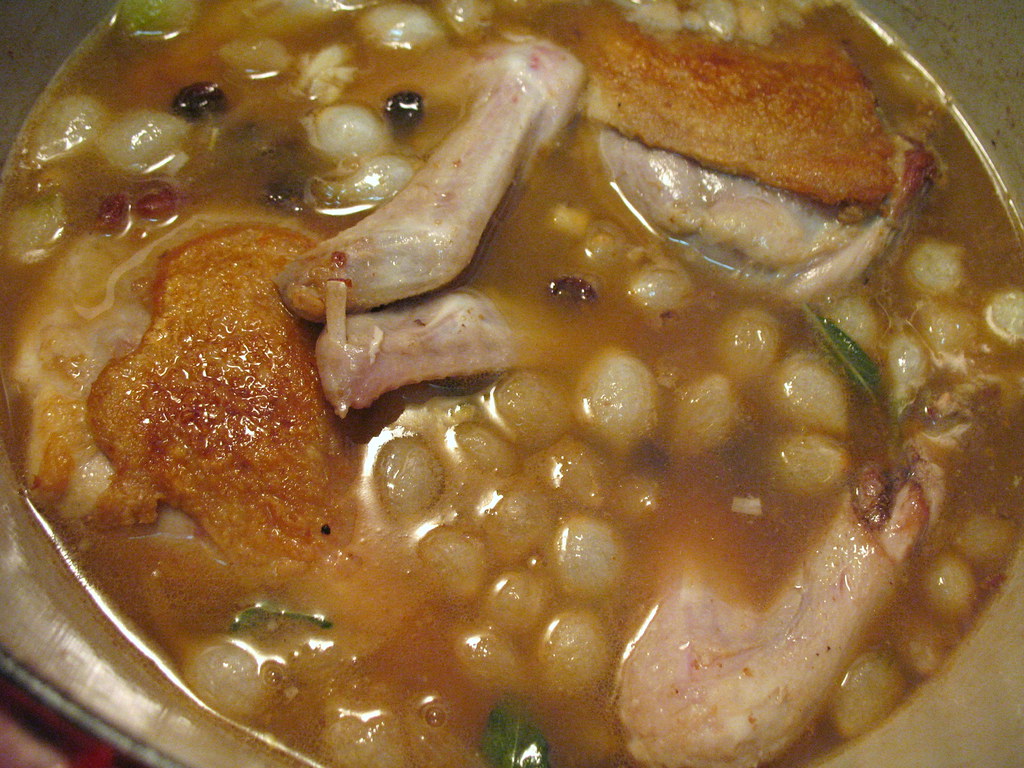 Apple cider is a seasonal treat that perfumes a home with its distinct, Christmasy scent when warmed. (I’ve seldom walked into a holiday party that was without a big pot of mulling cider on the stove.) I was able to enjoy this same effect while the duck legs braised for an afternoon, even though the smell was mingled with meat. I’m not complaining. 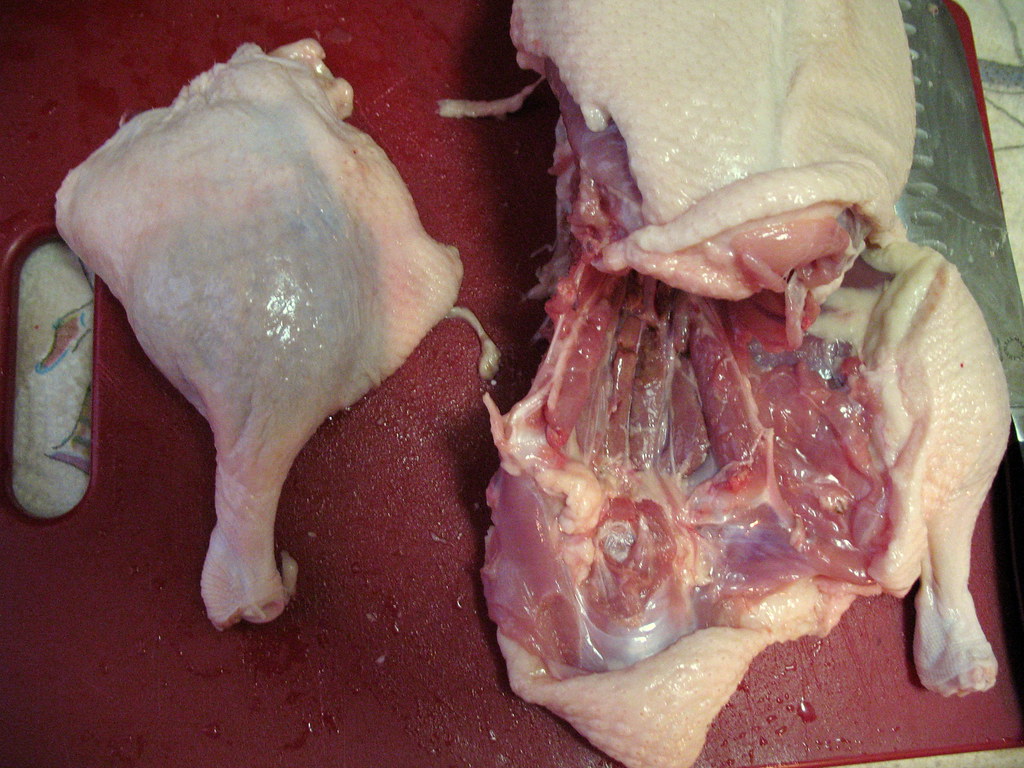 one down, one duck leg to go

It might sound like a time-consuming task, but pulling the duck meat off the bones is almost negligible when it’s been braised for as long as this. The bones and skin pretty much separated themselves on their own. Anyone who’s cooked chicken soup with a whole bird is in for a treat: leg meat falls away especially easily and its texture improves over longer cooking rather than becoming sort of tough like those pieces of chicken stuck to the back bone.

Finally, to name the dish… I had originally intended to call it a confit, but I’m now thoroughly confused by this food term. “Confit” stems from the French word for “preserved” and traditionally that preservation method is cooking the food in fat. But I’ve seen plenty of “duck confit” recipes that aren’t poached in fat. I’ve seen the word used with various vegetables and even potatoes. I generally came to think of it as referring to anything finely chopped or shredded and seasoned with some type of sauce. But a particular purist scoffed when I suggested this dish was “confit,” and I’d like to err on the side of caution. Any thoughts on how or why the word became so broad, I gladly welcome.

Preheat the oven to 350 degrees. Add the onions, garlic, raisins, sage and sherry or wine to the pot. Cook over medium heat, stirring and scraping the bits stuck to the bottom of the pan until the liquid is reduced by one-half. Return the duck legs to the pot, and fill to cover with apple cider. Bring to a boil, then remove from heat. Braise, covered, in the oven for 2-3 hours.

Let cool once removed from the oven enough to handle. Scoop out the duck legs and place in a colander set over the pot while you separate the bones and skin and toss out excess pieces of fat from the meat. Scoop out the raisins and onions; discard the sage leaves. Combine the raisins, onions and duck meat and set aside. Heat the pot of braising liquid on the stove over medium-high and reduce, stirring occasionally, until reduced to about one-half. Season with salt and pepper to taste. If it looks like you still have too much liquid to blend with the shredded meat mixture, reduce it more. Stir in the duck meat mixture thoroughly to re-warm. Serve with biscuits (optional).

Six brownie points: It might not be as fatty as being cooked in fat, but duck, especially the dark meat, is just fatty. (The brownie point scale might break if and when I get around to cooking the bigger, fatter mother goose.) It helps to rid some excess skin at the carving stage, and keep big pieces of fat at bay when you separate the meat from the bones. But moderation is the best way to keep this succulent dish healthy.

Seven maple leaves: This is the same duck that gave its flesh for the curry duck breast recipe. So all the same things about D’Artagnan’s sustainable and humane poultry practices hold true here. I added an extra brownie point for making sure that each part of the bird was used in some way — the wings, the bones to make stock with, and I still have the duck’s liver sealed away in my freezer for a later (perhaps pâte-like) use.