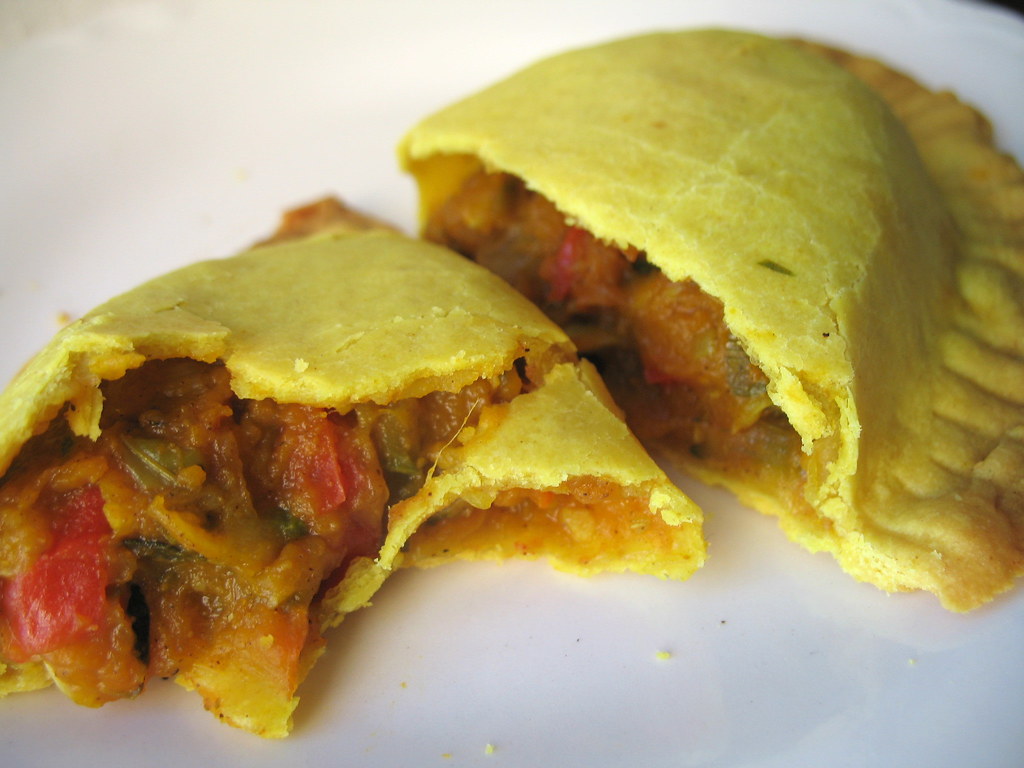 Happy Labor Day. In my neighborhood of Crown Heights, Brooklyn, this holiday doesn’t just signal the end of half-day Fridays and seersucker; it ushers in the beginning of the new season with a two-mile long parade of elaborate floats, costumes and music, a street-wide carnival, and several performances at the Brooklyn Museum, all in celebration of West Indian American pride. And all along the way, lots and lots of authentic West Indian food. 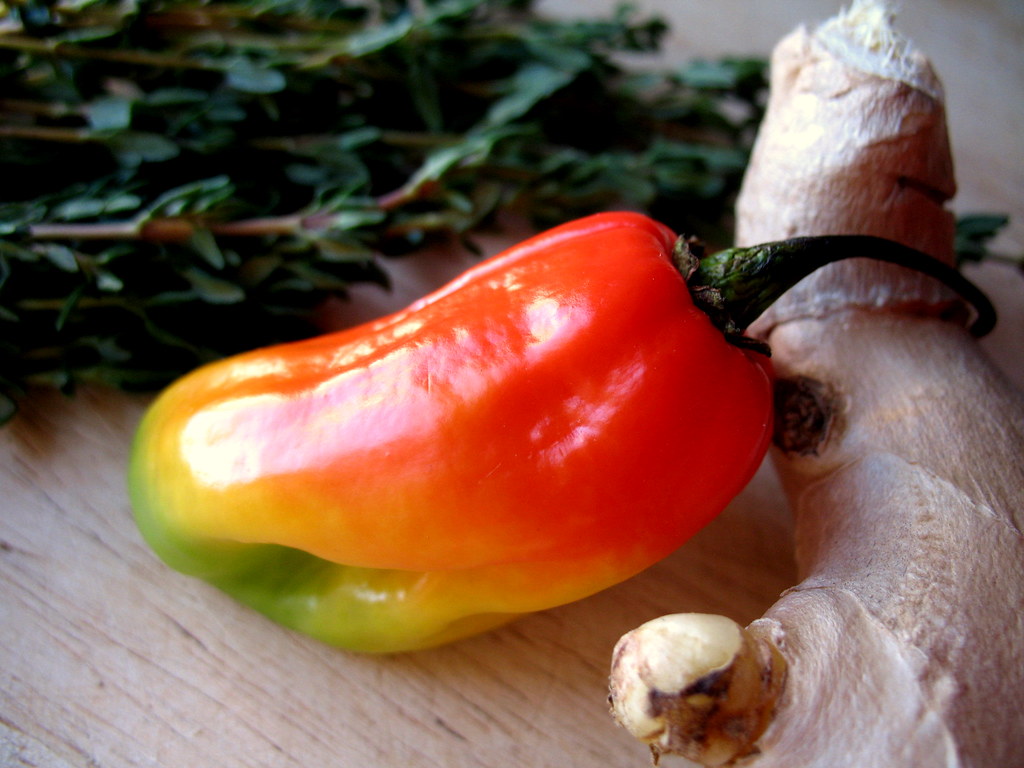 Jamaica has a lot to celebrate coming off a victorious streak at the Olympic Games in Beijing, including a sweep of medals for the women’s 100 meter sprint. They aren’t the only country making madness in the streets today. As I walked my bike from the park to the museum, flags and foods from throughout the region flocked the traffic-blocked street, creating a visual and aromatic megawatt rainbow. I think I can smell jerk wafting through my window. 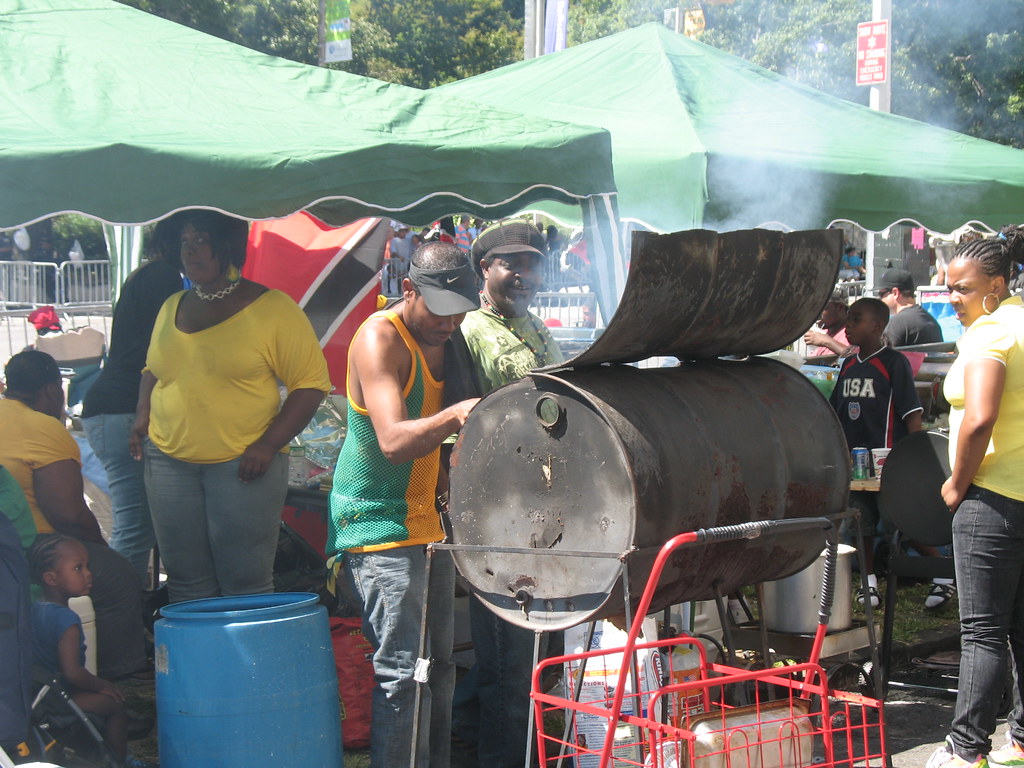 a familiar sight for the ‘hood: jerk cooking in an oil barrel 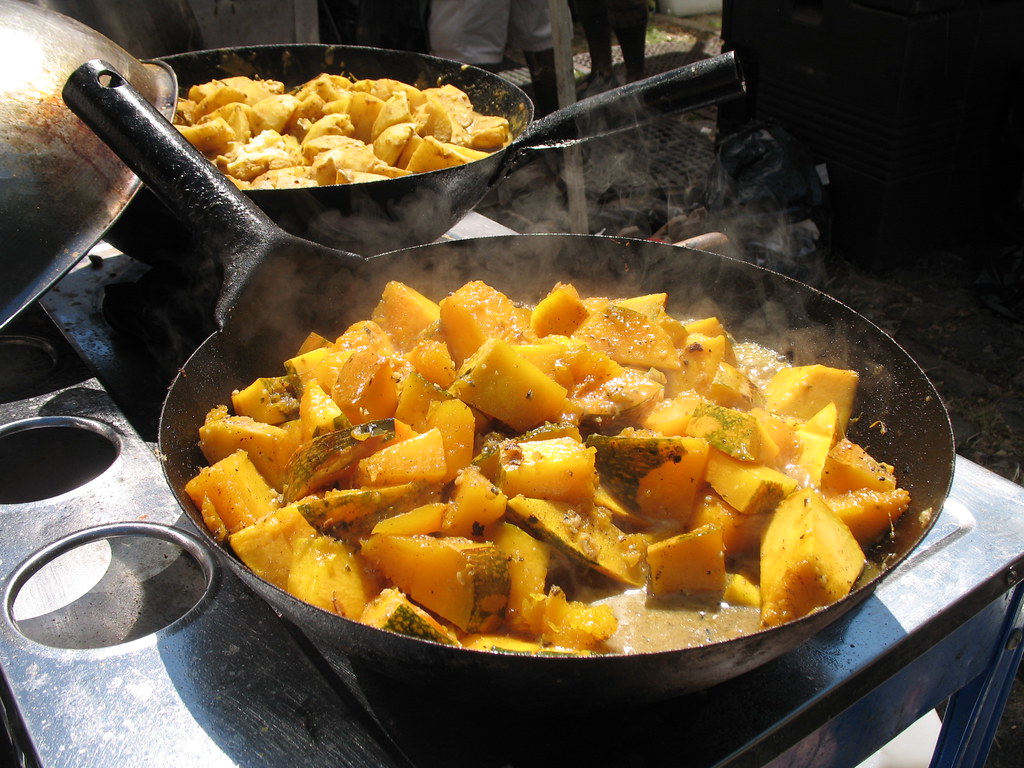 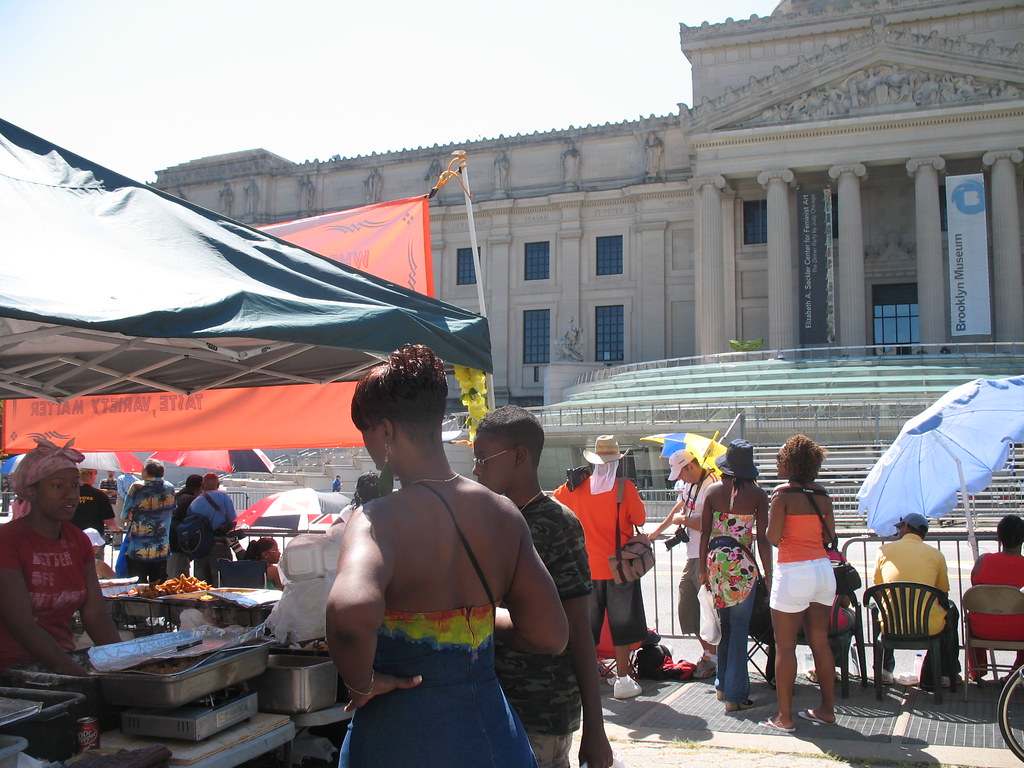 All this street fair food and festival might make a girl who doesn’t eat out pretty glum, you might say. Especially since it’s going to be in my face for the entire day. Well, I thought about this ahead of time, and while I do think it would only be “fair” to grab myself an authentic version of this today, I decided to learn how to make one of the most popular street snacks of the region: Jamaican patties.

Now, if you’ve only had a Jamaican patty from a New York City bodega or pizza joint that came frozen from a box, all cookie-cutter looking and disgustingly dry and crumbly inside, I pity you. Where I grew up in New Jersey I was able to get freshly-baked, homemade patties from small shops. I’m talking chopped meat, fiery spices, thick, rich sauce, and delicate flaky crusts. In a word: fabulous. But I didn’t want to go there quite yet. Because the Greenmarket is in such lovely flourish with fresh veggies now, I thought I’d fashion myself a spicy veggie patty instead. 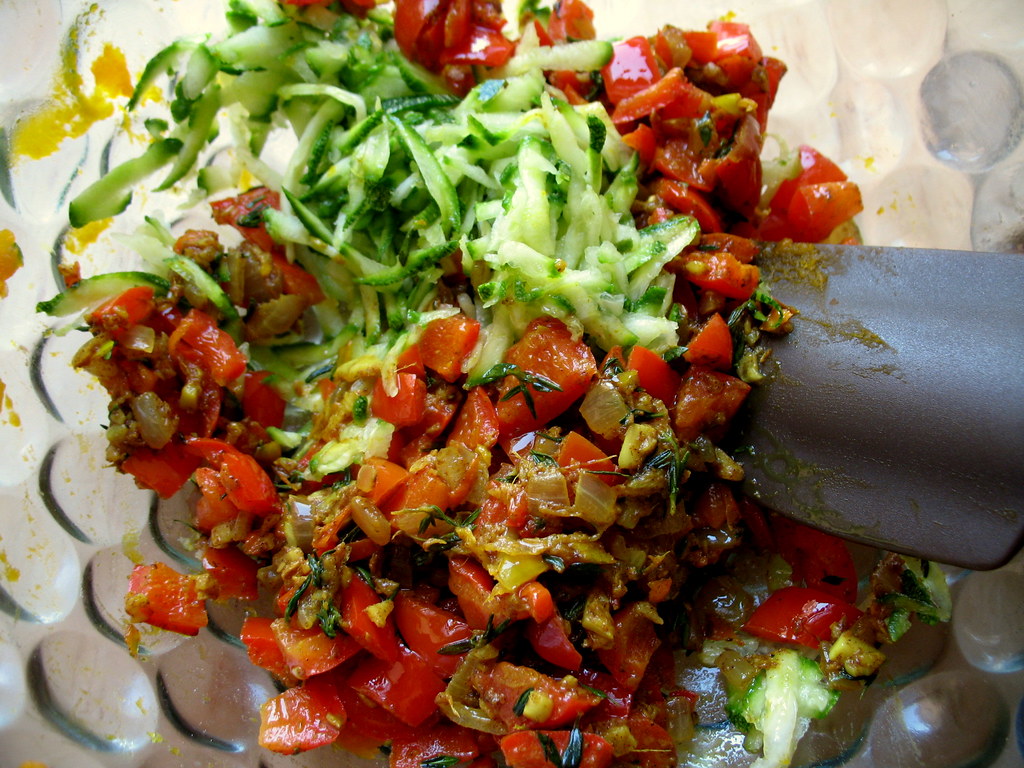 Vegetarian Jamaican patties are made by some restaurants in these parts in addition to the more popular meat varieties, so I’m told by a vegetarian friend (and this article). So this is not a completely novel twist. Only, my friend didn’t really have a clue what vegetables were in the ones he’d tried. So aside from diced bell pepper, onions and a touch of red-hot Scotch bonnets, which should go into good meat patties anyway, I added a little shredded zucchini, now in season. And to bind it all together into a colorful paste, I chose a popular Caribbean ingredient, calabasa squash. I’ve glanced at these with curiosity in my local markets, but had never cooked with them before. After roasting one half-globe of these gourds and tasting it, I can’t tell much difference between these and acorn squash. 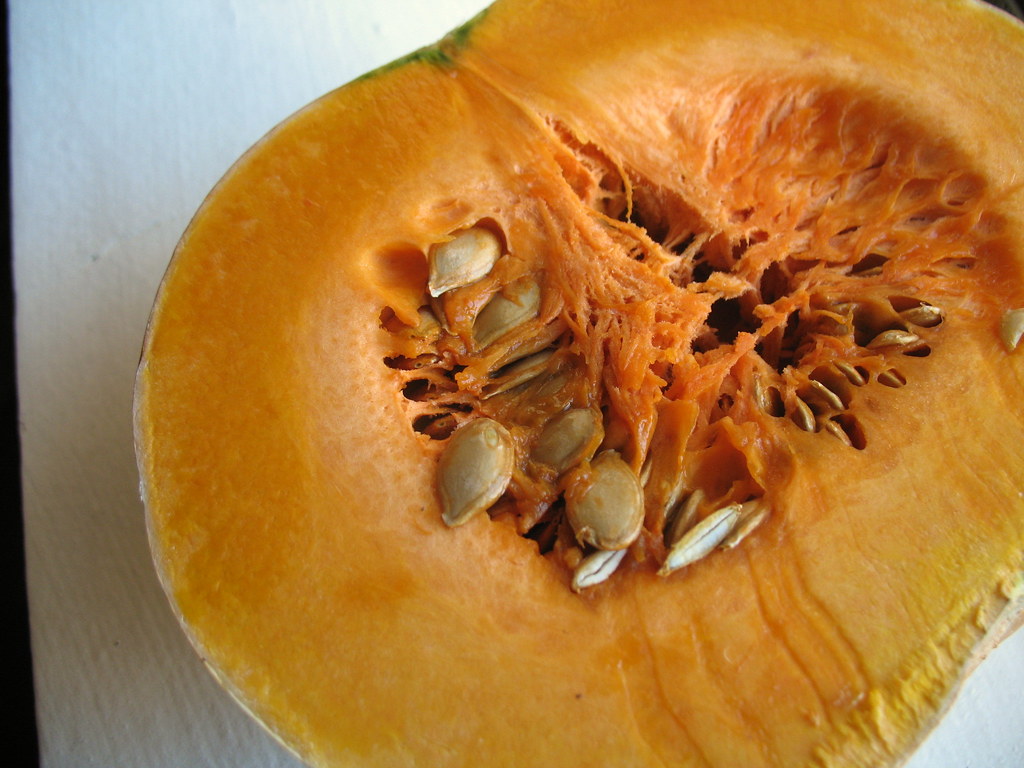 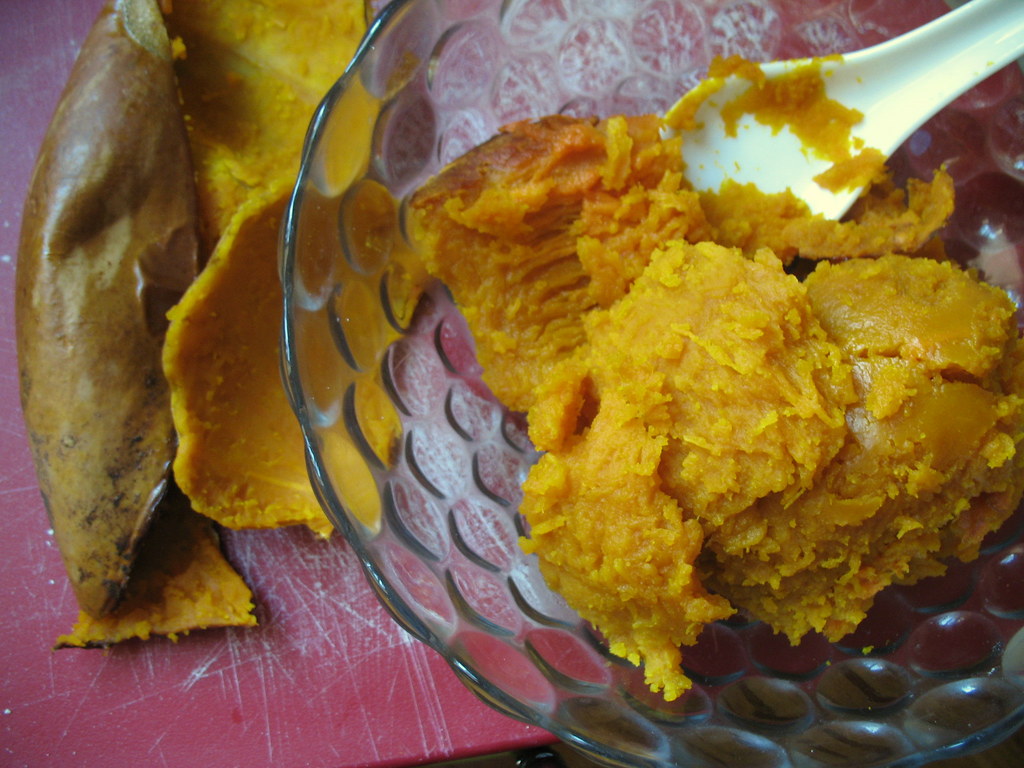 after roasting, the skin peels away

This summer I’ve already been inspired by the flavors of the Caribbean to create a jerk-inspired chicken salad. That experience gave me an introduction to common Jamaican spices: fresh ginger, thyme, nutmeg, cinnamon, cumin and turmeric. All these went into my veggie patty filling, and following a recipe for beef patties I used for reference, a little turmeric also went into the pastry crust dough to give it that signature golden glow. 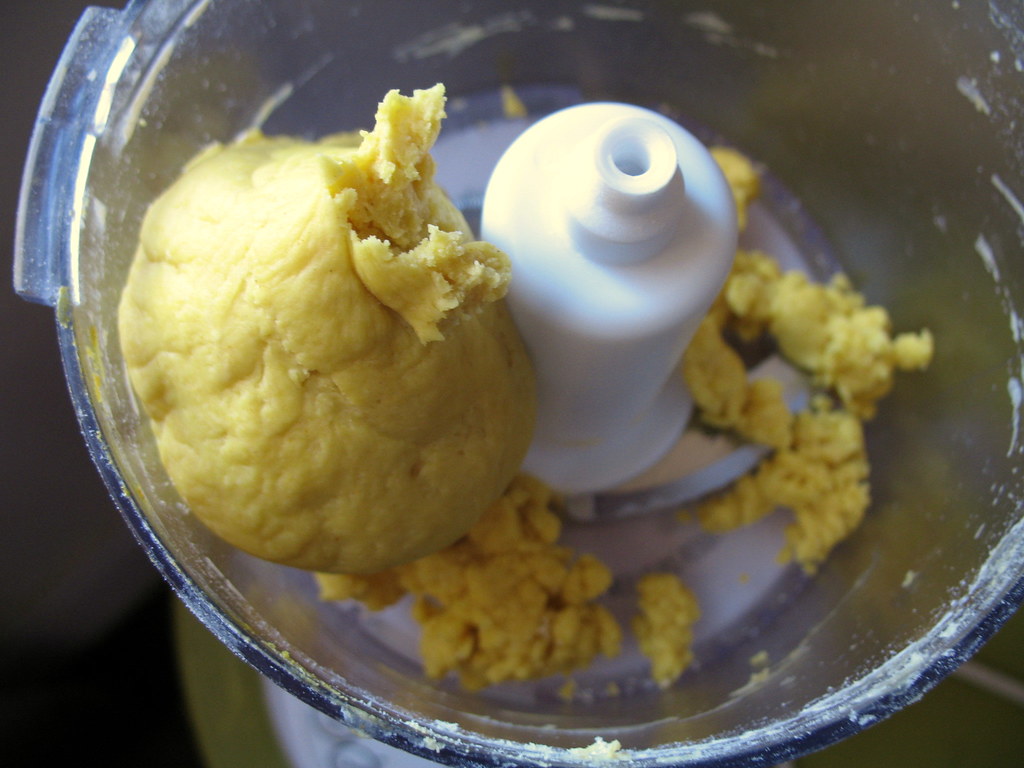 pastry dough dyed yellow with a pinch of turmeric 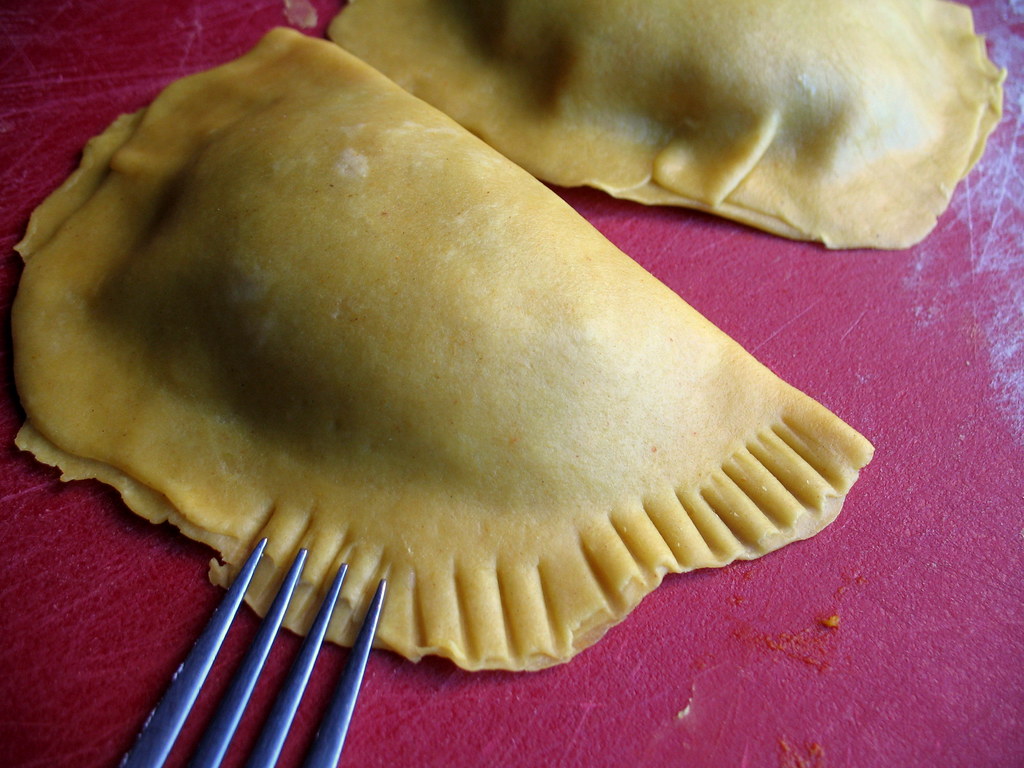 crimping the pocket edges with a fork

This filling had just the right amount of heat for me. The overall taste is almost more sweet than savory, all coming from the vegetables’ natural sugars. If you’re shy on spiciness you might want to try this out first using just half a Scotch bonnet instead of a whole. But in either case, be sure to remove all those seeds (rubber gloves help this task out enormously, lest you wear contact lenses like I do and have to scream for the next day or two while taking them out and putting them in, like I do). 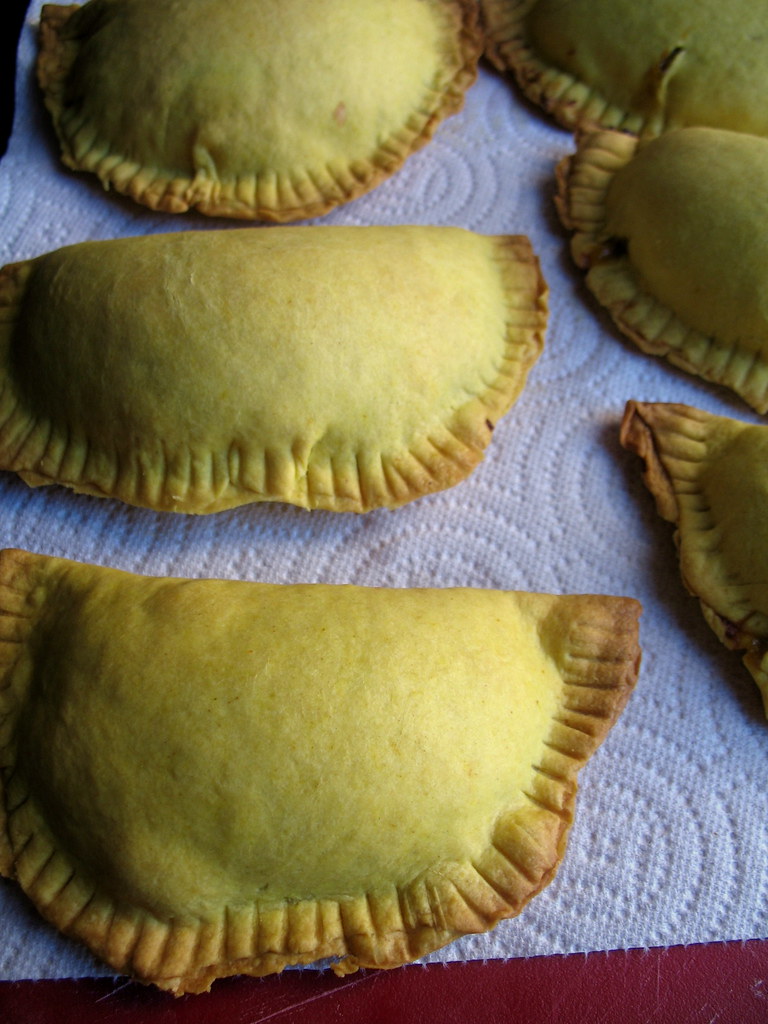 Finally, this is one of those instances where I really wish the Internet age could come up with the technology for taste-o-vision. The photos of these patties might not look like much, but their flavor, and satisfying contrast of textures from crisp pastry to warm, gooey filling, doesn’t compare to anything I’ve ever tasted before. It’s a confetti of fresh vegetables, kicked up with classic Jamaican spices, encased in a buttery shell. That’s about the best I can do word-wise. Please, have a go of it yourself.

Now, off to the streets for that “real” patty! The steel drums outside are getting louder by the minute.

To make the pastry: Sift dry ingredients together and cut in butter in a food processor or with a pastry cutter until mixture resembles coarse crumbs no larger than a pea. Add cold water a small spoonful at a time just until moist enough to form a ball. Cover with plastic wrap and chill while making the filling.

Preheat oven to 375 degrees. Remove seeds from squash, and coat exposed surface of the squash’s flesh with vegetable oil. Place flesh side-down on a baking tray and roast for about 40 minutes (depending on the size/shape of your squash — mine was a clean half). Squash should be very soft to the touch when cooked through. Flip it over so the steam evaporates as the squash cools. Once it’s cool enough to handle, the flesh should slip away easily from the thick skin. Transfer to a bowl and keep uncovered as to let as much liquid evaporate while you prepare the rest of the filling.

Heat a large saucepan with oil. Add the onions, red pepper, Scotch bonnet, garlic, ginger, thyme and dry spices and sautee 5-6 minutes, until onions are soft. In a large bowl, combine the shredded zucchini and squash, and add the pepper sautee to the mixture. Add the Worcestershire sauce and salt to taste.

Divide the chilled pastry dough into 6 equal pieces. Roll each one out on a lightly floured surface to about 6″ ovals. (If the edges are crackly, even them out a little with your fingers.) Divide the filling into 6 equal parts.

Preheat oven to 400 degrees. Fill one side of each oval with filling, leaving at least 1/2″ on the edges. Moisten one edge with water with your fingertip and fold the other side over. Crimp edges with a fork. Place each filled and crimped patty on an ungreased baking sheet. Bake for about 25 minutes, or until tops are just lightly browner. Let cool 5 minutes before serving.

Four brownie points: In a word, fabulous. The squash is what keeps the filling stay together, instead of fatty meat, or just fat. How brilliant is that? Like most winter squashes of a deep orange hue, it’s rich in Vitamin A, Vitamin C and Vitamin E, has a little calcium and protein, and adds tons of flavor without… fat. Red pepper is also rich in antioxidants, and a bit of potassium and fiber-rich zucchini doesn’t hurt, either. With six patties to 4 tablespoons of butter in the pastry, you have less than a tablespoon of butter a pop. How did this savory, decadent street food snack get so darn healthy? (And stay so delicious?) I’m not going to answer that, for modesty’s sake.

Six maple leaves: There is really no excuse to not be a big green giant this time of year, when the Greenmarkets are so plentiful. That said, a couple ingredients could not be found there, but instead at my local Crown Heights Caribbean markets, like the squash and the Scotch Bonnet pepper. Everything else — save for the flour and spices — were local Greenmarket finds. Not bad for a Jamaican-inspired dish.