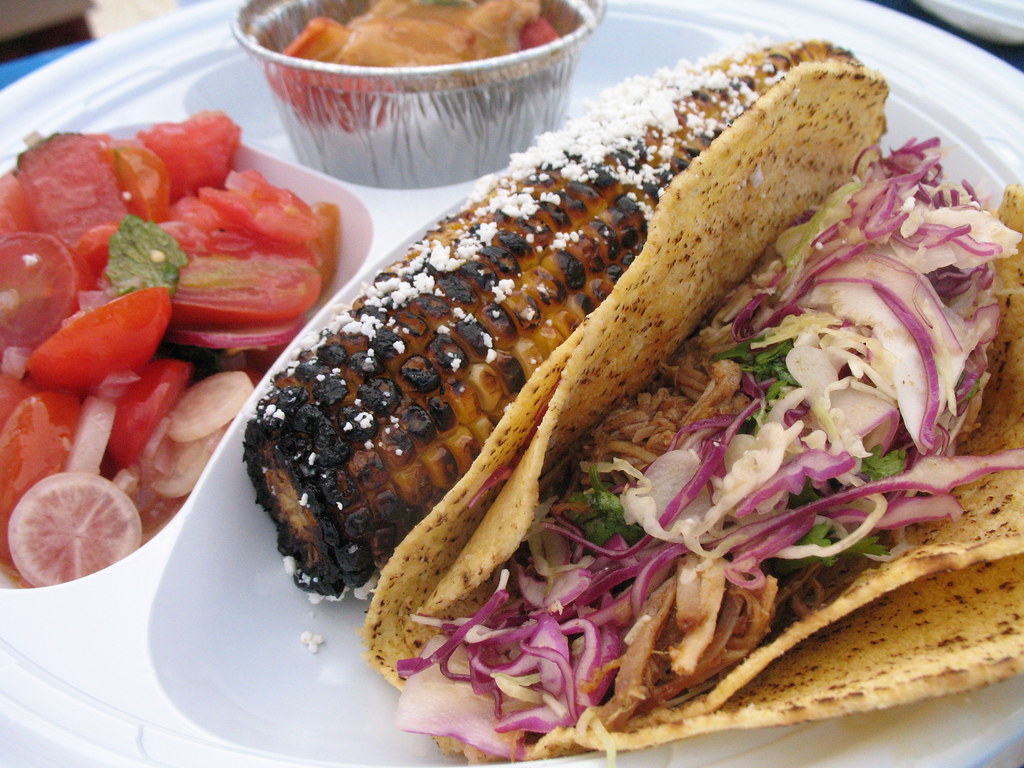 Some of you may have heard certain stories about New York magazine’s Highbrow BBQ last weekend. You may have seen a video about it on Grub Street, and if so, caught an unsightly glimpse of me chewing, or something. You may have even been there yourself, under the clear, blue sky at Solar One’s East River waterfront playground. But in any of these cases, what you probably haven’t seen is an up-close account of the cook-off that took place toward the end of the event. As one of the judges of this amateur grilling competition, I can share the inside story. And as promised, exclusive to Not Eating Out in New York, the winner’s homemade recipe. 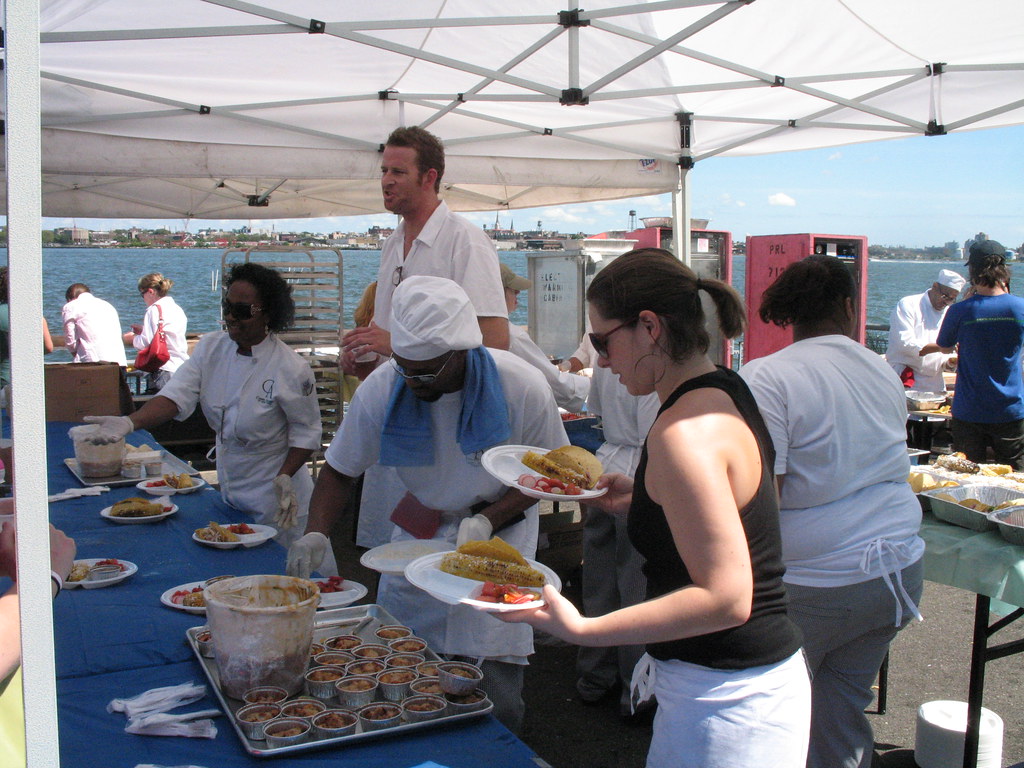 CJ and crew serve it up

First, a shout-out to the event’s chef/host, CJ Jacobson of Top Chef Season 3 fame. For his part, he cooked an unconventional feast of pulled pork tacos with an orange-zesty, Moroccan-spicy flair, a watermelon, radish and feta salad, grilled corn with ricotta salata (a slight improvement on the typical cojita cotija, he told me specifically), and peach cobbler (shown at top). 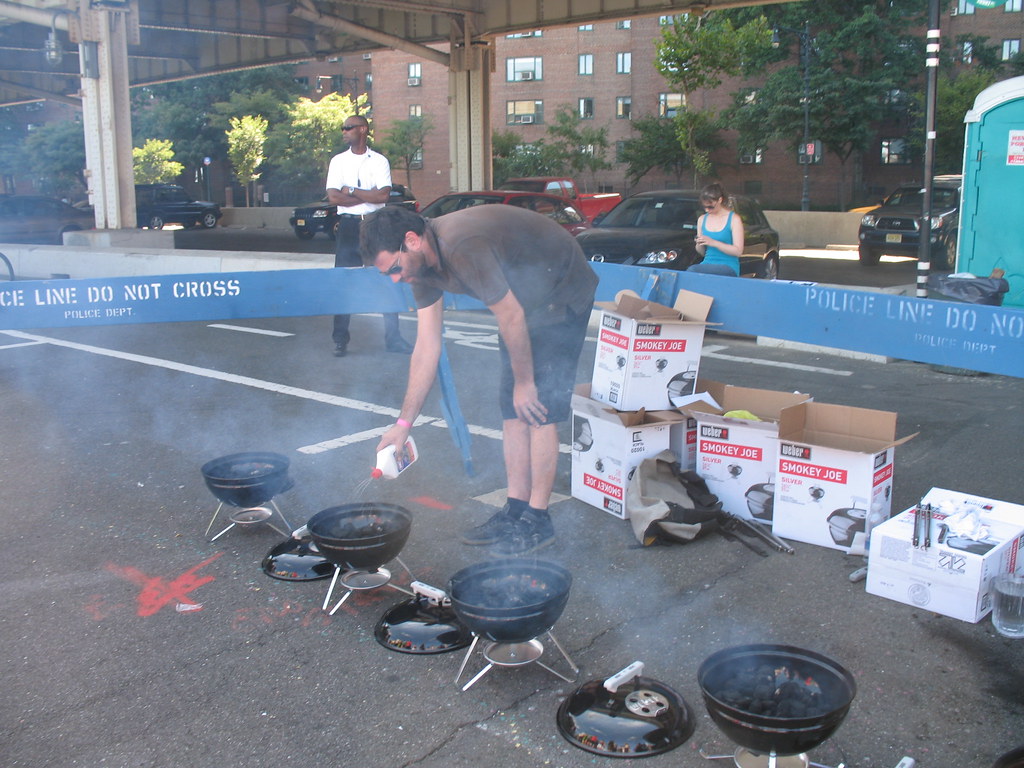 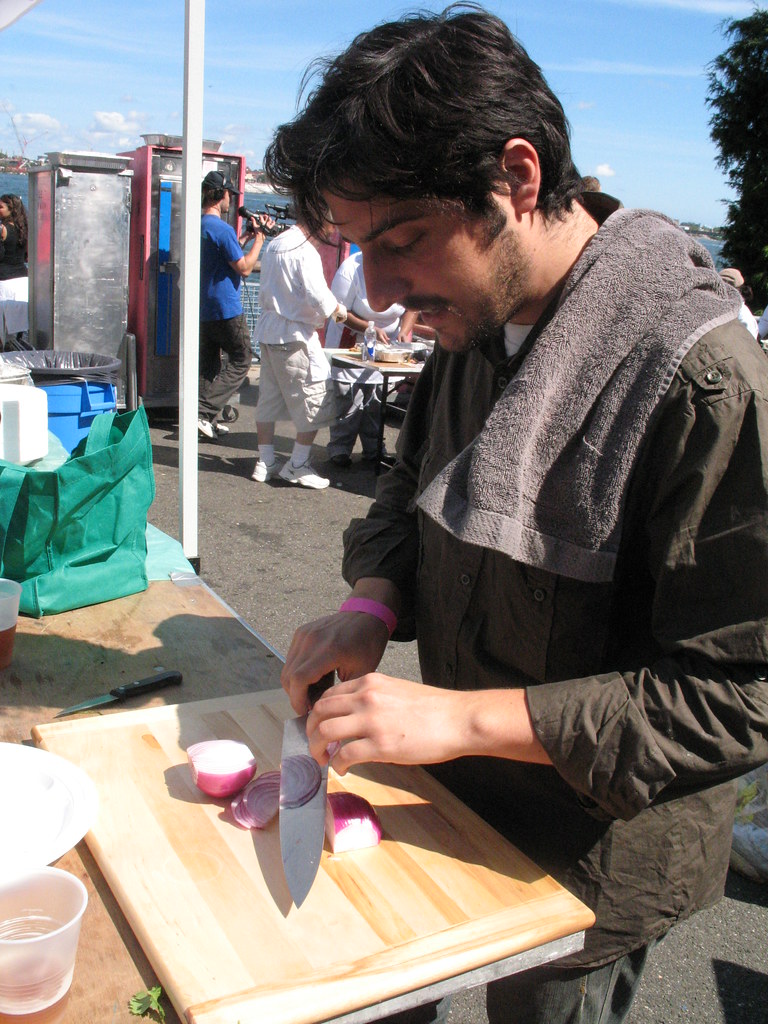 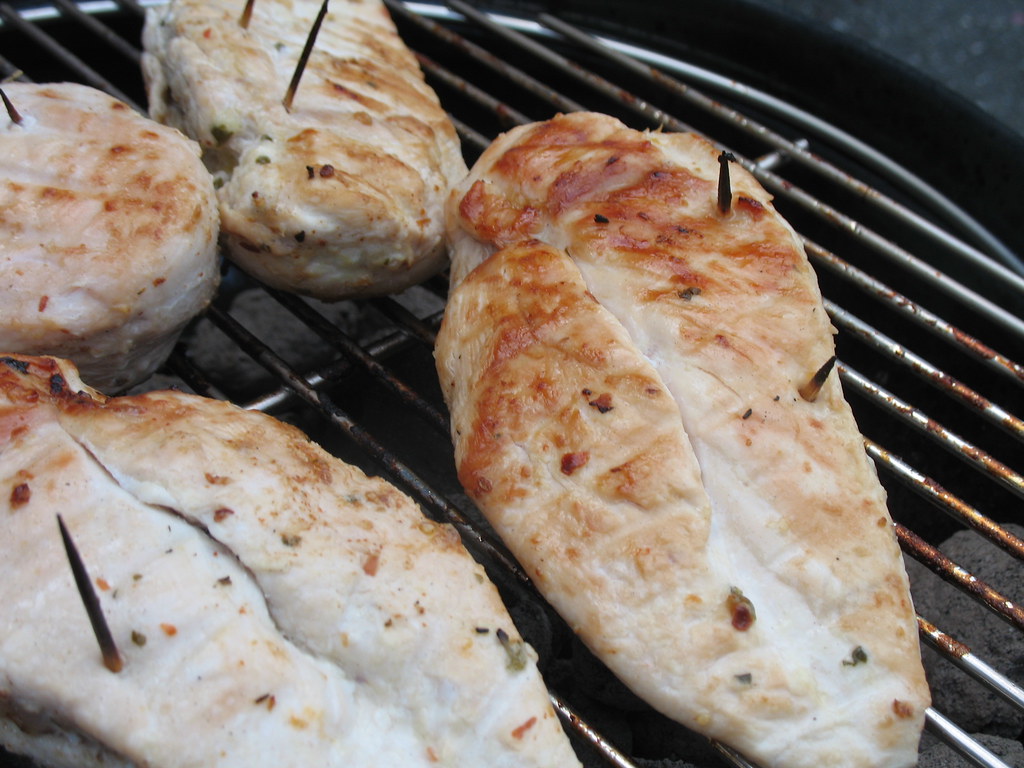 After grabbing a plateful of this grub, I had some time to spare before the cook-off. I also had the opportunity of chatting up the competitors, and watching them get prepared. These happened to include some familiar faces to this blog: at grill station 2 was Eugene Kim, of Great Hot Dog Cook-off Audience Favorite Award fame; at station 3, my friend and home chef extraordinaire Michael J. Cirino (also one of my co-chefs of the Finger on the Pulse/Dinner with the Band BBQ); at station 4 was another winner from the Great Hot Dog Cook-Off and Greenmarket goddess Melissa Pingleton; and at station 5 was Zeph Courtney, the reigning champion of the Brooklyn Chili Takedown.

Okay, so maybe I knew 4 of the 7 contestants from previous cooking events. But that just goes to show that this contest was populated by New York City amateur cooking elite, folks. And it’s a tight circle at the top. 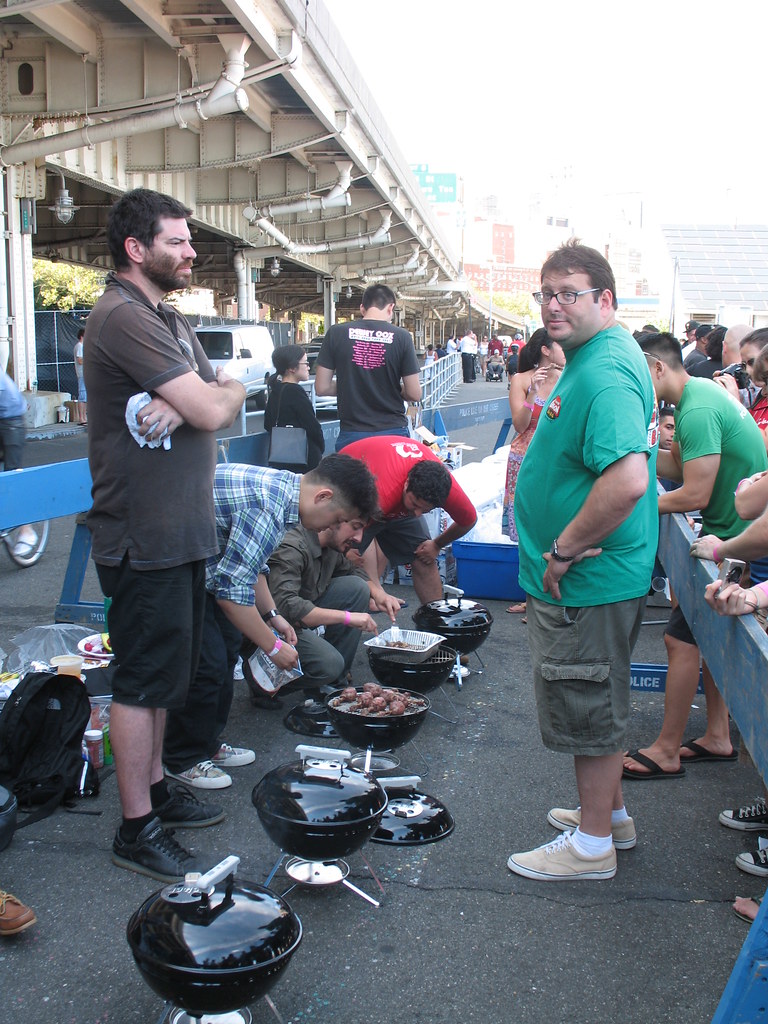 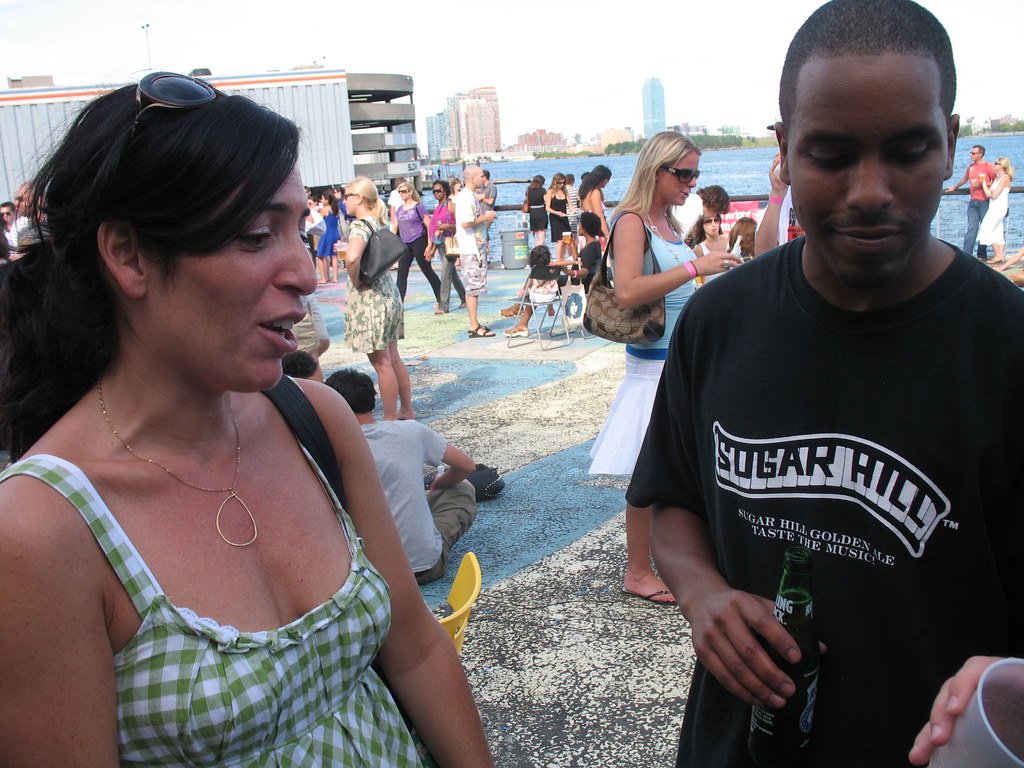 To get started, myself and the three other judges for the event – delightful veteran food writer and blogger of The Strong Buzz Andrea Strong, beer recipe-loving chef and member of the family-owned Harlem Brewing Company Khouri Beatty, and CJ Jacobson himself – were treated to a skirt steak. Marinated in a tangy, savory rub and topped with a lovely Bourbon and apple cider vinegar-based sauce, these steak slices were extremely tender, juicy and flavorful. Its creator, Kareen NeJame, is a culinary school graduate, and it showed. 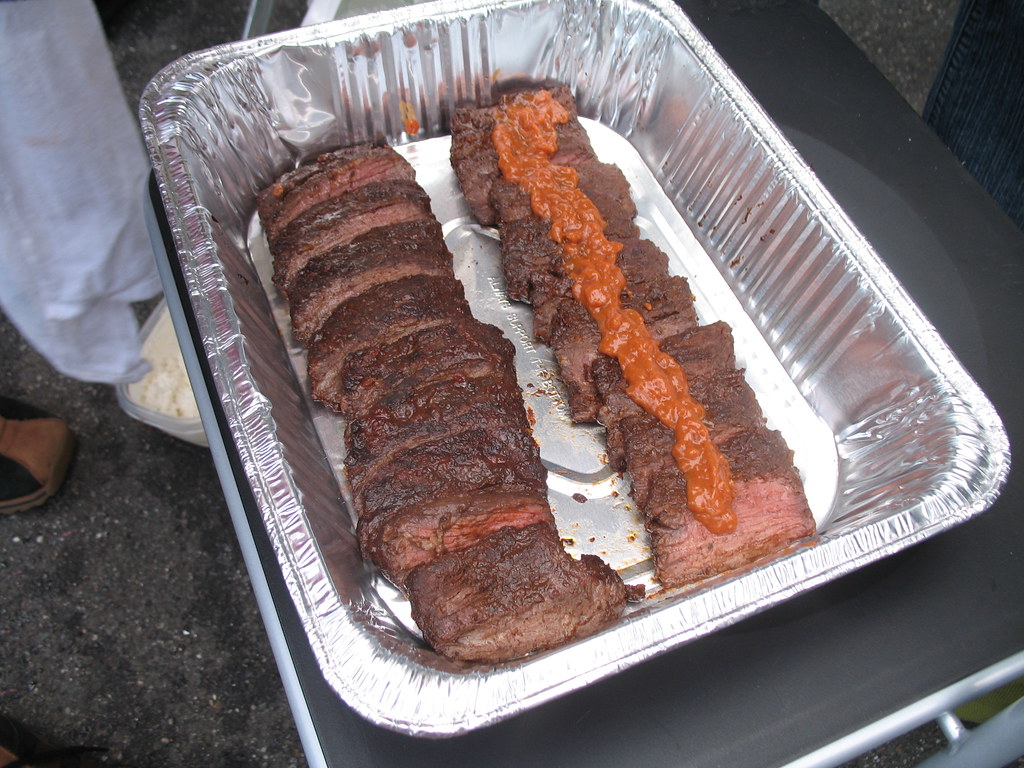 Second in line was Eugene’s grilled chicken drumettes. Not only do I love the word “drumettes” and their fun, fat lollipop trimmed shape, but I liked how juicy the dark meat remained inside. His was served with a beautiful presentation of spicy wasabi and ginger, and glazed with a reddish-purple plum-based sauce (that we felt, sorry to say, could have simply benefited from a little more salt). 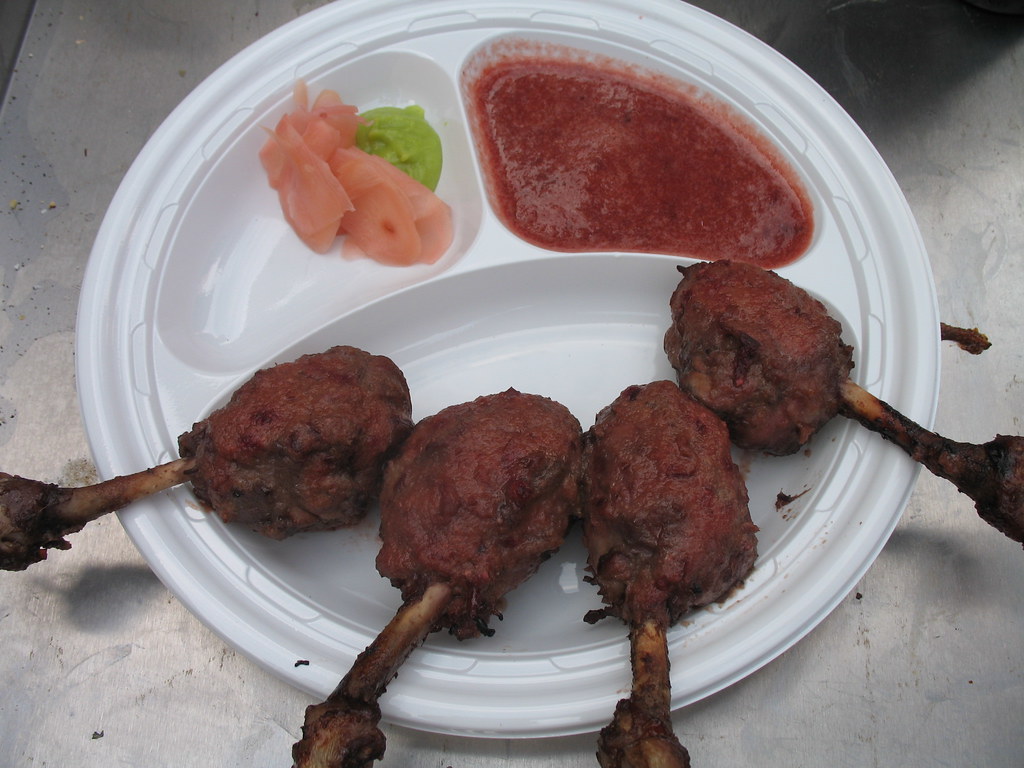 Next up we tasted Michael’s mole-braised duck taco, a savory-sweet-spicy creation topped with crema, cotija, sliced radishes, red onion and cilantro. The corn tacos had been lightly oiled and grilled to that warm, almost-crisp texture. A dark sauce made from the braising liquid was mixed with the tender shreds of duck legs. But apparently the duck legs were tempting enough on their own: when a tray of four legs were left out for a moment, pre-shredding, a security guard grabbed one and gobbled it up! He later said it tasted good. 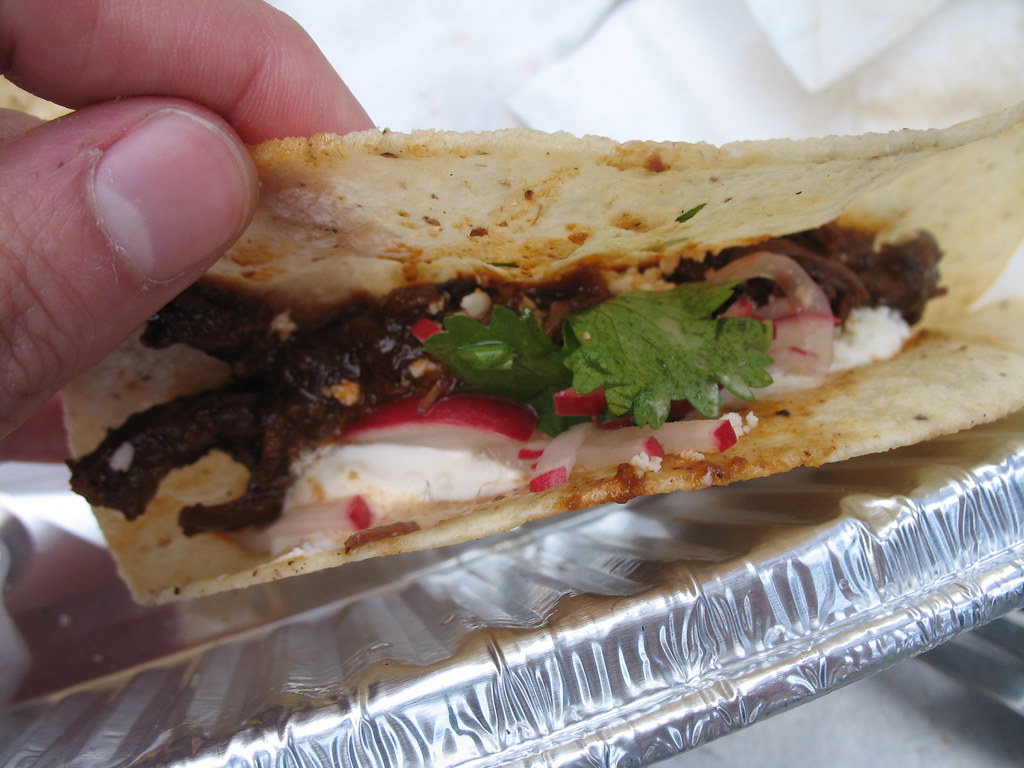 Anyway, our next bites of the afternoon were from Melissa’s short ribs. Her Asian-inspired rub was marked by fresh ginger, garlic and flakes of chili, and the subtle blend of flavors was so appealing that my only wish was that my piece had more of it. Every ingredient in her recipe was purchased at the Greenmarket, where she works, starting with the Flying Pigs Farm Tamarack Hollow Farm ribs. 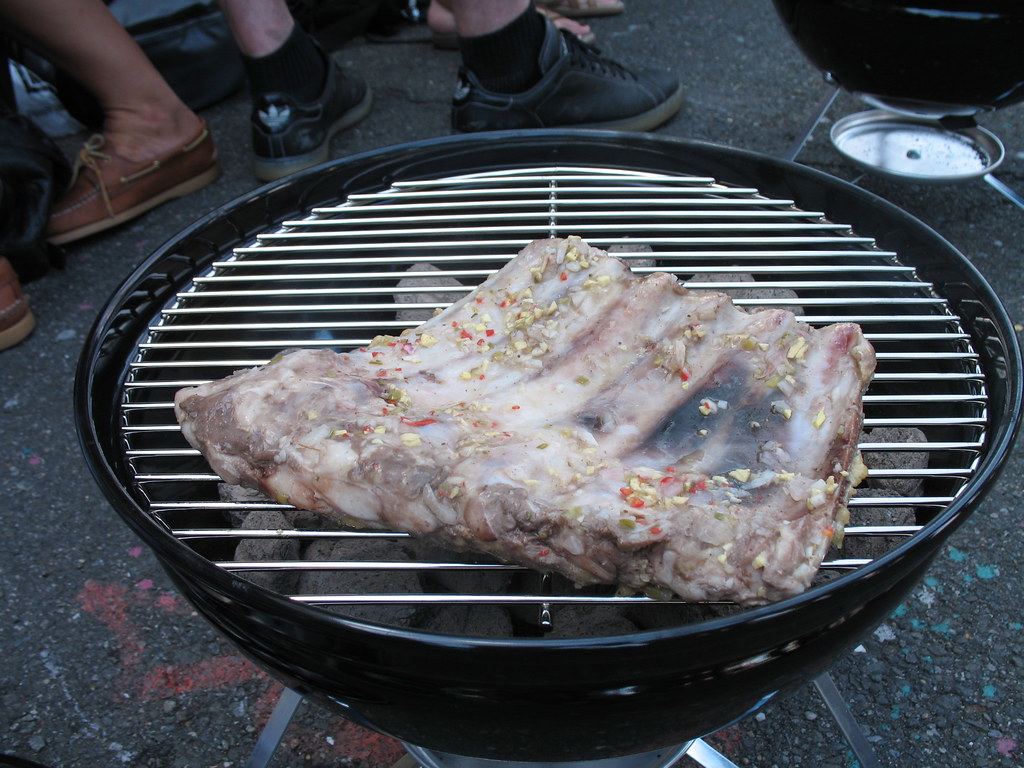 Next up was Zeph’s bold, spicy, satisfying all American-tasting short ribs. These were really quite good. He served them with two barbecue sauces, a traditional smoky, thick reddish-brown sauce and a thin vinegar-based sauce (my preferred of the two). The rub had seeped well into the ribs as to tint them a little bit orange (maybe turmeric was used?), and penetrate them with heavy flavor. 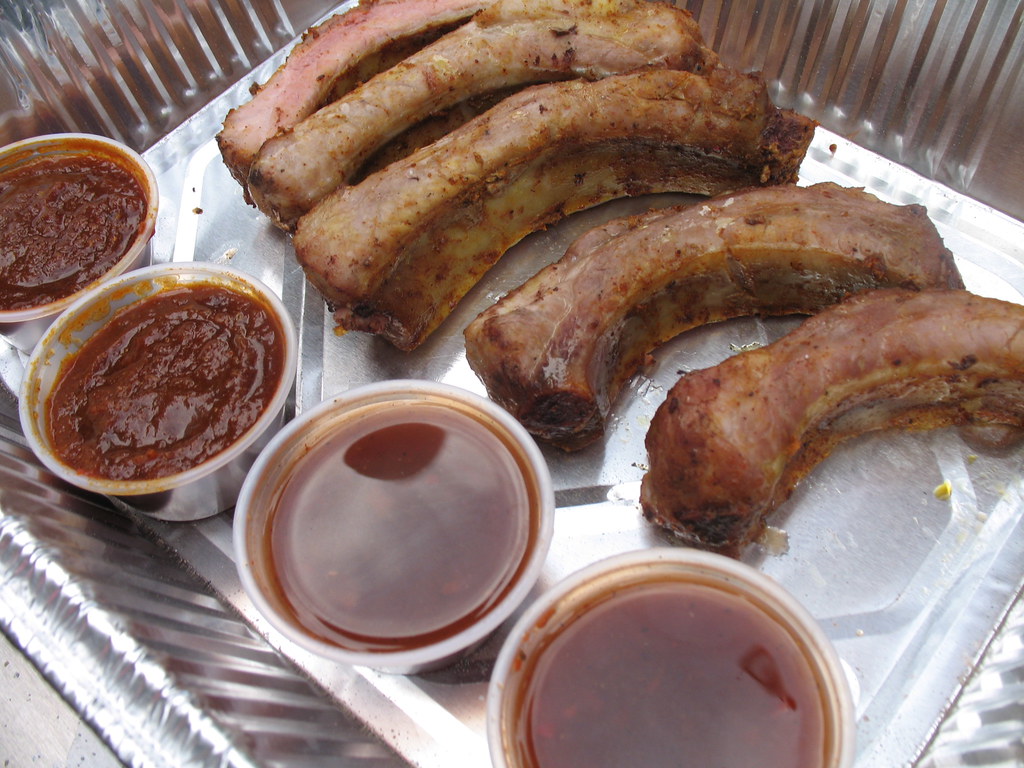 Next contestant Casey Comb’s entry had top-notch visual appeal. His chicken breasts were so precisely stuffed with a pungent cheese-based filling and grilled to a nice surface char that when sliced up for serving, the breasts’ stuffing stayed inside like any fine roulette. It was topped with homemade tomato sauce however, which for some reason made the dish feel more like a casserole bake rather than the grilled specialty that it was, for me at least. 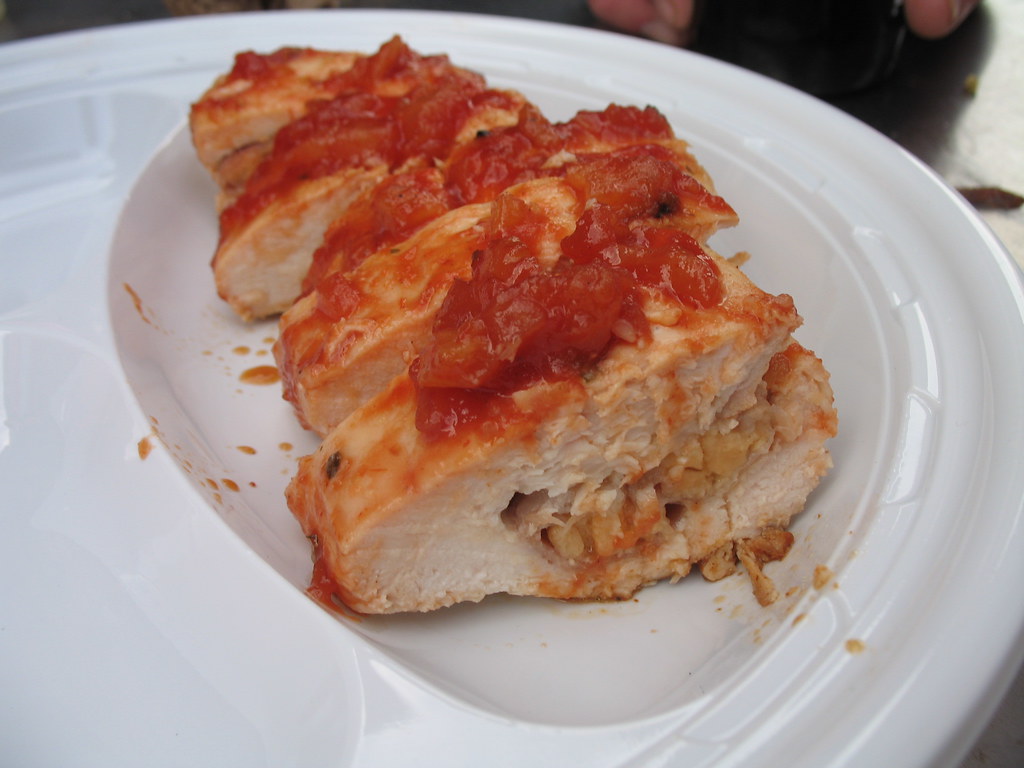 Finally, Kristin Johannessen’s barbecue chicken pizza was up. I had watched her place the dough on the hibachi and have some trouble with flipping it over – it seemed to want to slide through the grates when she first put it down and then stick to them once it was cooked. However, all the fuss must have paid off. My piece was a bit too puffy on the crust for my taste but the other judges must have had it better off. Kristin also grilled skewers of chicken and onions, and she topped her pizza with these drenched in a homemade barbecue sauce and some fresh mozzarella. 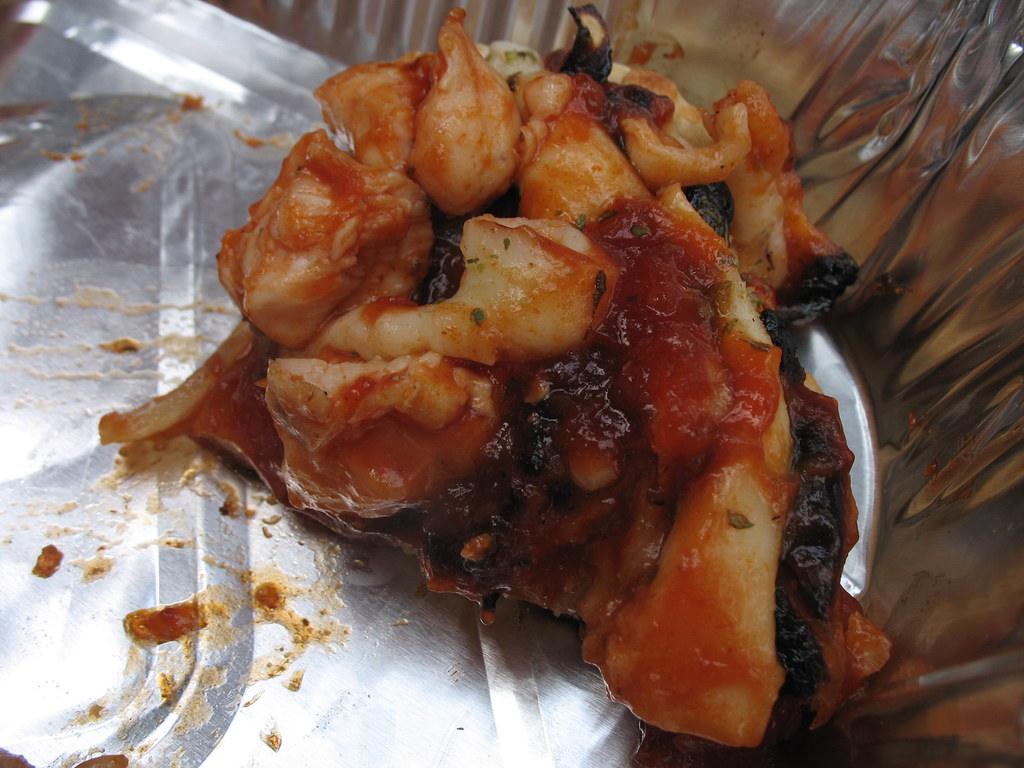 And guess what? She won! We all appreciated the risky, non-traditional move she took in barbecueing a pizza rather than a super meaty entry. It also sounds like the simplest in technique of all the other BBQ entries that day. Which is good for us, because we now have her winning recipe. Barbecue chicken grilled pizza tonight, anyone?

Combine all of the dry ingredients in a bowl and slowly add in the oils and water with your hands. Get messy and kneed the dough vigorously, until it has a nice stretchy consistency. Place the dough in the fridge at least for one night to reach its perfected state.

Mince the small onion and saute in the 2 tbsp. of butter. Once the onions are caramelized add the additional ingredients. Let the sauce simmer until desired consistency. I had it on the stove for about 40 minutes and added salt and pepper to taste. Feel free to add more/less dependent on your own taste-buds. I like my BBQ sauce sweet, so I added a fair amount of fresh honey.

Cut up three chicken cutlets into rather tiny pieces and slide them onto kabobs.

Cut up on small onion and slide these onto kabobs.

Drizzle extra virgin olive oil and garlic oil lightly over both the chicken and onions.

Grill kabobs on stove-top grill or outdoor BBQ until the onions are caramelized and the chicken is cooked through and tender. Remove the kabobs and prepare the dough by stretching it until is round and the desired thickness. Oil both sides with both the garlic and olive oils and place on the grill. When the sides of the dough have changed color and appear to be almost cooked, flip to the other side and add toppings to the pizza. Generously spread the chicken, onion, BBQ sauce and fresh mozzarella on the pizza and season with Italian seasonings. I used a garlic and Parmesan mixture. Let the pizza cool for several minutes before slicing and serving. Enjoy!