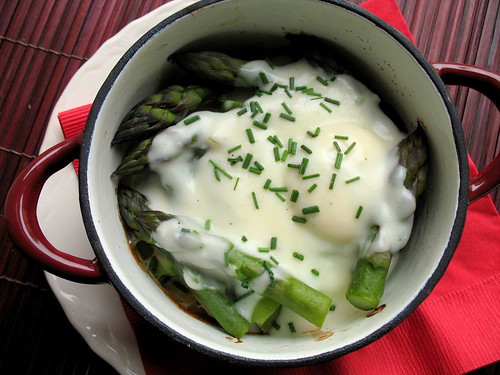 This could be one of my favorite things I didn’t know I was making. Not knowing I was making in the sense that I had no idea it would turn out like this. I didn’t predict the asparagus would cook so perfectly, still juicy and a little bit crisp, and the egg’s yolk would combine with the lemony bechamel to drown it in an even richer sauce. Nor that a few scattered slices of Swiss would find its way into bites so mysteriously, hanging onto the fork in little melted strings.

Brunching is important to me. I’m not talking about heaping piles of breakfast, or a dainty weekend lunch. But something precisely in the middle of the two. I’m not sure why it grew to be a source of antagonism. As you might have gathered in that now really, really old little rant in this blog’s meta pages, I was particularly critical when it came to restaurant brunches way back when. There had to be something more spectacular than a good Eggs Benedict in those days to get me riled about the whole languid institution of brunch. Now, I’m not so sure. Yes, it’s nice not to pay upwards of $10 for it (albeit while foregoing all the service that dining out entails), but one creamy, slippery egg placed atop a divine-tasting stack of edibles? See, you’ve got me there. I can eat this every whichways. And I sort of have been, too, a year and a half of not eating out and several varieties of omelettes, quiches, frittatas and whathaveyous placed ceremoniously beside some freshly hashed browns later. But there’s still a little part of me that wants to shout, I’ll have the Number 2, poached, with bacon on the side (or whatever combination strikes my mood that morning)! Who do I get to scream that to now? 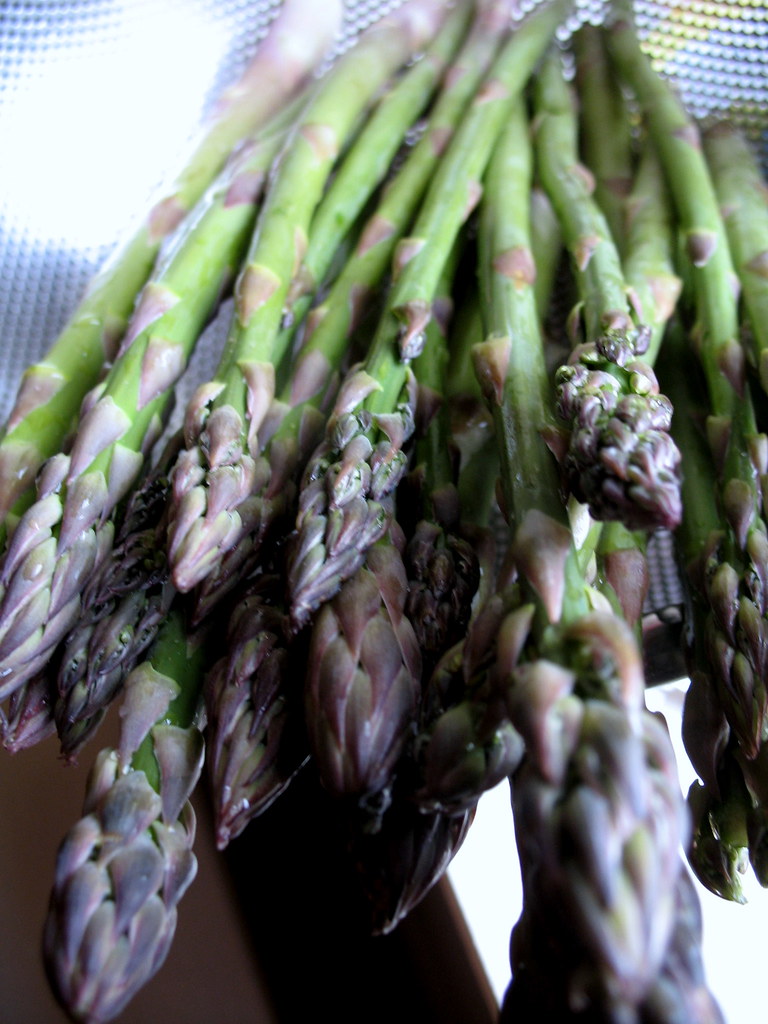 
Um, I suppose that would be you. So here we go. This mini casserole is filled with a seasonal find from the Greenmarket (which I was fortunate to have arrived at early enough to grab a bunch): Asparagus. They’re so mild and delicately sweet right now. I love that the bunch I had varied in stalk width so much. For this recipe, I chose the chunkiest lot of them, since I’d be cutting them down to thirds anyway and wanted to save the most delicate, thin ones for a more presentable occasion. Also, I had no idea how long they would take to cook, and didn’t want to overcook them. 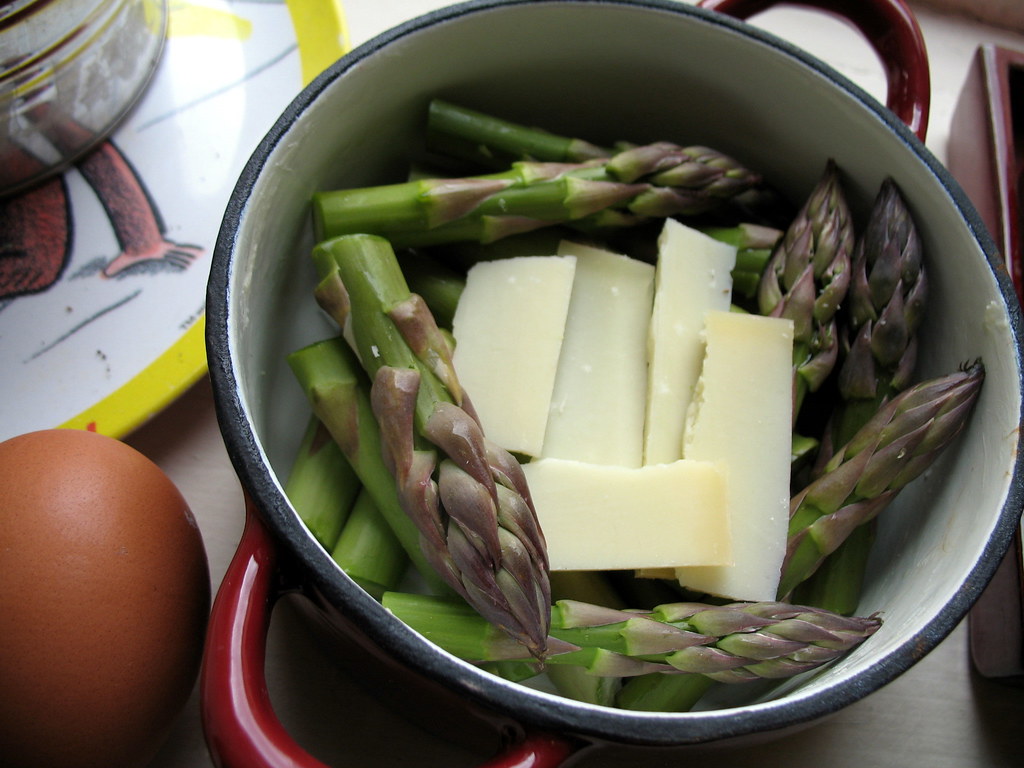 arranging the stalks and slices of Gruyere 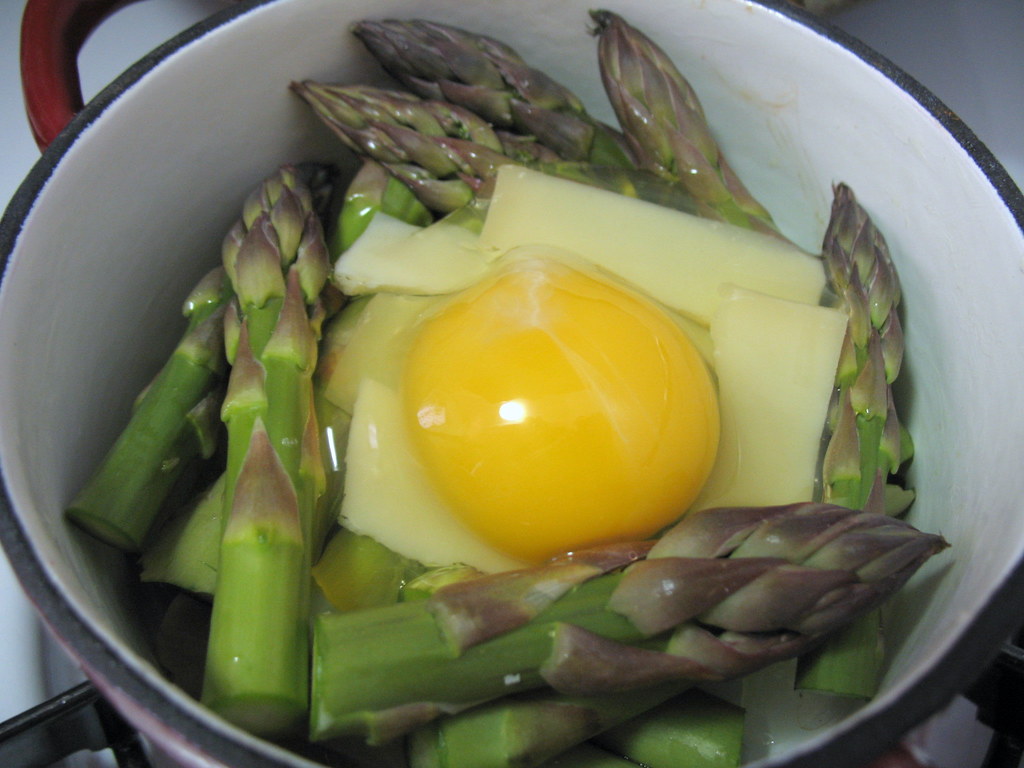 
Keep in mind the recipe below is based on having a roughly 2-pint sized covered casserole dish, an oven-to-table piece that serves one individual. I’d seen how vegetables cook up crisp-tender in them with little liquid when they go into a very hot oven. If you’d like to make a bigger batch, and divvy it up when serving, you’ll probably need a longer cooking time. Whichever the case, you should have plenty of time to stir up the quick, creamy bechamel sauce on the stove and sprinkle it with lemon and just the right seasonings in the meantime. Or you could do a batch of more traditional, buttery Hollandaise for that matter; the lighter, milk-based bechamel is just a sort of cholesterol-conscious departure from my favorite brunchy dishes. 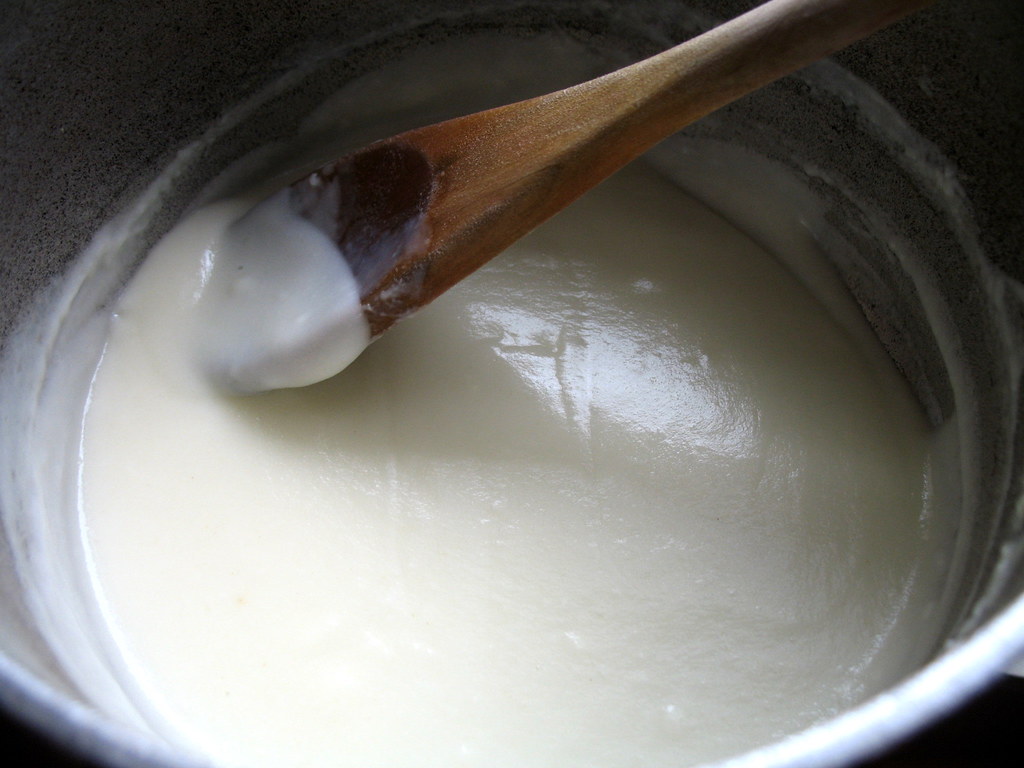 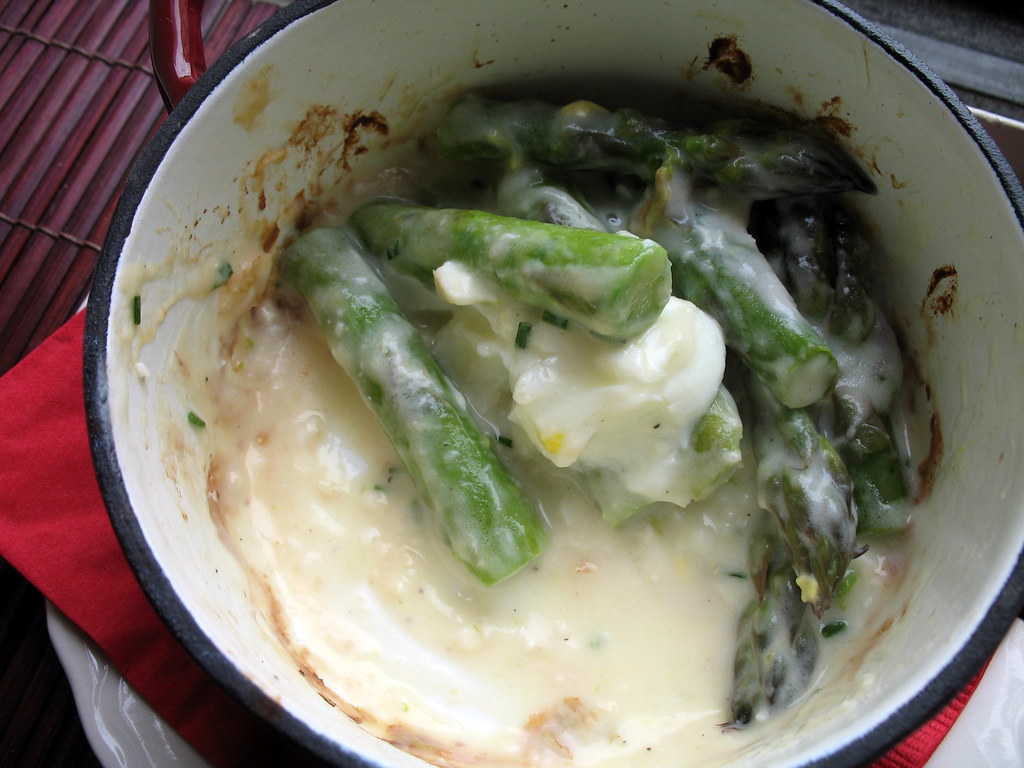 Preheat oven to 500 degrees. Grease two small, roughly 2-pint covered casserole dishes. Arrange the asparagus stalks in a pile inside with a slight decrease in the center. Top the center of it with the slices of cheese, if using. Carefully crack egg and place it on top of the slight decreased part with the cheese. (It’s okay if lots of the white falls through, it’ll still cook and taste fine and shouldn’t stick to the sides.) Cover the pot and bake for approximately 10 minutes.

Meanwhile, melt butter in a saucepan over medium heat. Add the flour, and stir until fully combined and bubbly, about 1 minute. Pour in the milk and continue stirring for about 3-4 minutes until it has thickened and started to bubble. Remove from heat. Season with a pinch each of salt and pepper and stir in the lemon juice. Taste for seasoning. (If sauce cools and becomes lumpy before use, simply heat it back up again while stirring constantly.)

After ten minutes, check on the casserole. If any of the white parts still look very clear, cook another minute or two longer. The yolk should be runny, so be careful not to overcook. Remove lid from casserole once done. Pour the beschamel sauce liberally on top. Garnish with a sprinkle of fresh herbs if desired and serve immediately.

Four brownie points: This is quite unheard of for breakfast. But then, how often does asparagus make it onto your breakfast platter? The stuff has oodles of just about everything, nutrition-wise, including protein, calcium, and for some reason, lycopene (I thought that was only for red things). And, as mentioned, this recipe trades stickfuls of butter and more egg yolks (in Hollandaise) for a bit of flour, milk and a tablespoon of butter to attain creamy sauce galore (bechamel). Works for me.

Seven maple leaves: Less ingredients can be more — much more, when we’re talking about environmental friendliness. Because there’s less going on in this dish (it’s really just asparagus, eggs and milk), you can get all your hardware from local and organic sources more easily. Which is just what I did. Except for that pesky lemon, again. And the Gruyere, which I almost forgot. It’s optional anyhow.