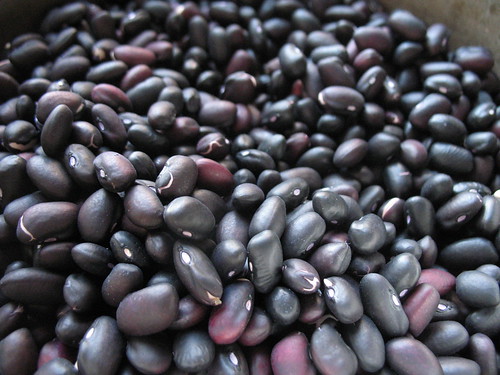 I love it when people who are not necessarily big cooks tell me about a recipe they crafted themselves. It’s usually peppered with personal experience, and told in a way that reveals their trial and error with the ingredients and overall pride for its deliciousness. This type of story fell on my lap recently when an acquaintance emailed me his recipe for black beans and brown rice. It was simple, but fresh somehow. He insisted on starting out with dried black beans, not something I tend to do, and it included a whole bunch of fresh thyme and bay leaves in addition to onion, garlic and jalapenos.

I wanted to make a big, satisfying pot of it to share with a few friends over good wine and some basil lemon ice cream for dessert. When I popped into a corner produce market for a few ingredients, I saw a box full of squat, colorful peppers; I decided on a whim to spruce up the original recipe with additional types of fresh chiles. Just a little embellishment, I thought. 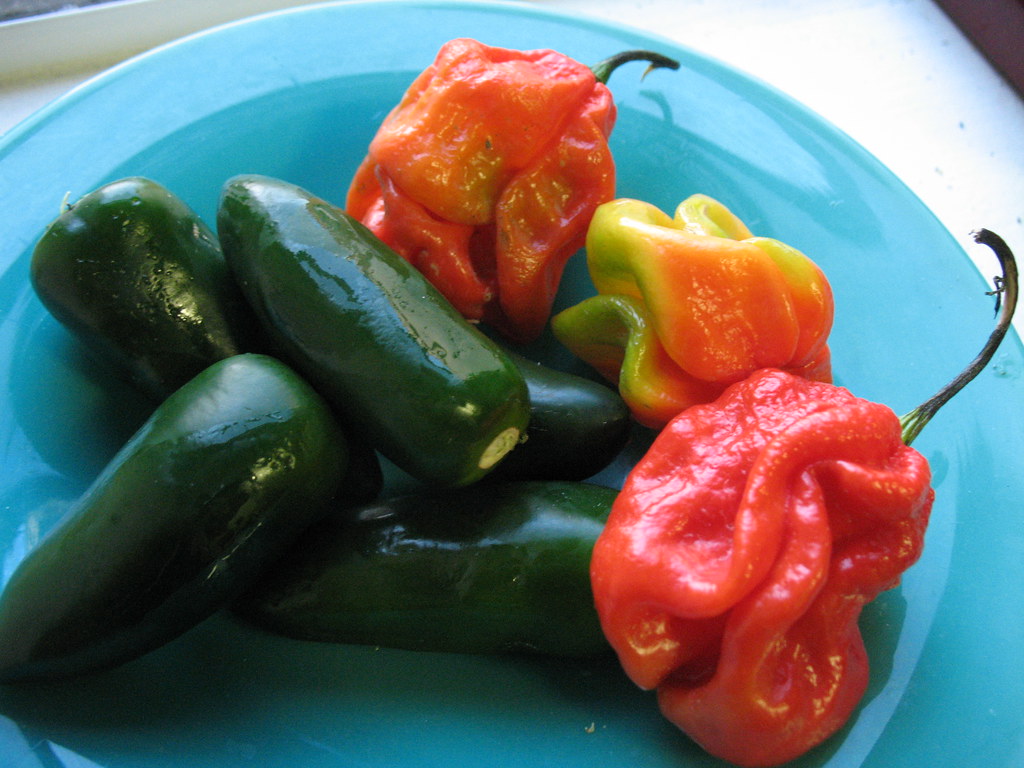 there’s the culprits, on the right!


I’m extremely embarrassed as a food enthusiast and pseudo home cooking authority to admit that I didn’t realize I’d purchased Scotch bonnet peppers. With the same heat rating as habaneros, these flame-colored capsicum are better realized as little nuggets tossed up from hell. No excuse can make up for my shortcoming, but maybe it was the way the box was casually propped next to the register, without a label except for, “3/$1.” Maybe they were just so pretty, with their neon red and orange ombre skins. Maybe they were only 3 for $1. I had a vague notion that these were mild, sweet cherry peppers. (In retrospect, I could have taken note that I live in a very Caribbean neighborhood, and Scotch bonnets are the essence of Jerk.)

But I wasn’t really thinking. Not very straight, at least. Earlier that day, I had been trawling Myspace while bored at work when I made a horrifying discovery. My ex’s profile, which had shown the status “Single” for the past couple months since our breakup, now proudly hailed, “In a relationship.” Interesting.

Anyway, back to the failed beans. I diced up the crisp, crinkly peppers on my cutting board while chatting later that night. It turned out that two of my friends were either too sick (Jordan) or too healthy (Karol, who went to the gym) to come, so just Matt came over to share in the feast. Believing these peppers to be mild, I wanted to add them to the beans after they’d been cooking for an hour, along with some extra onion and garlic, for a little more texture and color. After a taste, I thought it could use some more spice, too. The jalapenos sautéed at the beginning of the recipe hadn’t made a dent. So I carelessly removed most of the seed clusters but let all the clingy seeds that fell off them remain. One knifeful after another, I dropped all three diced peppers into the pot. Matt paused a moment – we were deep into conversation about past screwed-up relationships – and suddenly said, “I think those are Scotch bonnets.”

I knew he was right even before I tasted the beans. Matt bit a piece of pepper hanging onto a stem left on the cutting board. Confirmed. (And… yikes.) The rest of the night would see us attempting to pick all the (finely) diced pieces of peppers out of the beans with tongs and spoons, adding many more soaked beans, chopped onion and water to the pot, waiting, stirring, drinking too much on empty stomachs (two bottles of wine and a six-pack between us, Jesus, lord), and eventually eating plates full of fried (brown) rice I whipped up around ten o’clock and basil ice cream, straight from the recycled canister I’d frozen it in. (And I wasn’t going to mention the part about making the dance video, but what the hell.) 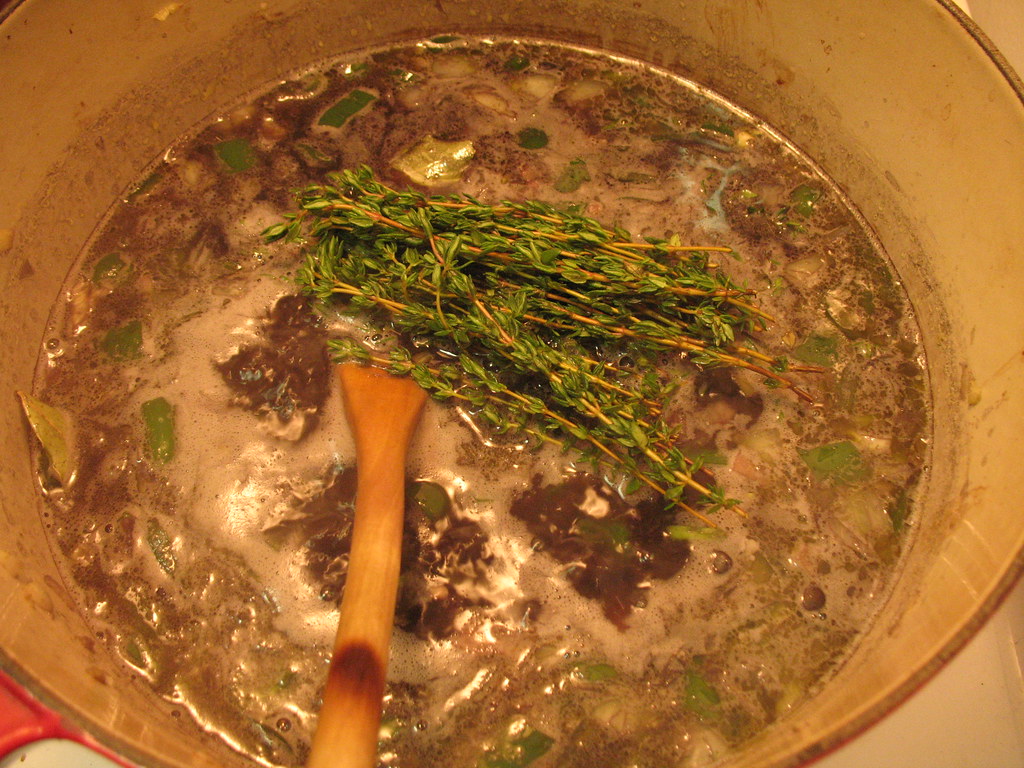 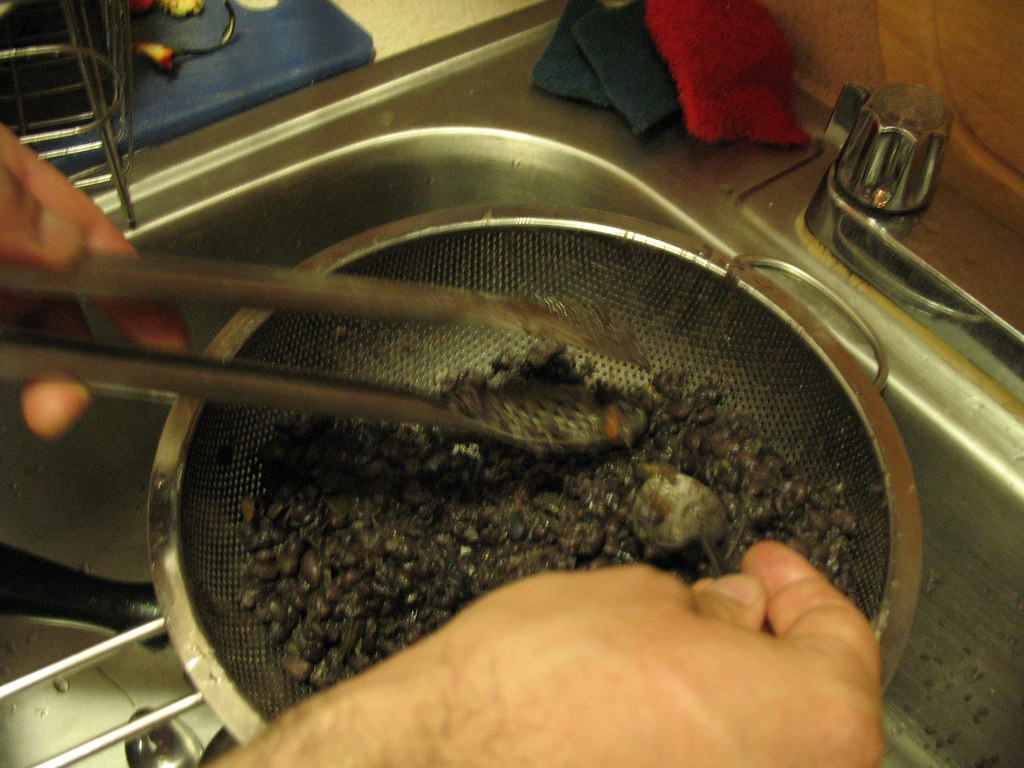 the mad scramble to remove the taint


The beans were, and still are, hazardously hot. Matt couldn’t believe I didn’t even taste or inspect the peppers before throwing them into the pot, which I’m pretty ashamed of. So, at present the big, black, gooey, bare thyme sprig-studded disaster is sitting in my fridge. I hope to somehow forge a soup out of it at some point, but I don’t think I can muster the courage to open that pot for a few days. I wouldn’t be surprised if the stuff is disintegrating the enamel on my Le Creuset pot right now.

My hands are dangerous instruments of Scotch Bonnet fire, which I can taste and feel. (Especially when trying to put in my contacts in with the help of tweezers — funny, this isn’t the first time I’ve had the peppery problem.) I just washed the cutting board I’d used and got a fresh burst of sting. I better throw that thing out, stained as it is with the virile pepper’s juices. I ought to wipe off this keyboard once I’m done writing this.

And what about that original recipe that a friend of a friend had so kindly emailed me? Er… my bad. Good thing I learned a valuable lesson while only wasting a pound of beans and a couple onions, rather than a huge pot of chili or something. And kind of had a blast doing so, though I hesitate to use that word since my earlobe burned the whole night (I must’ve touched it).

So to all those who ask if I make cooking mistakes, hope you enjoy this confession. And next time you find yourself in a rut, try out my favorite fallback dish, fried rice. It only takes frozen peas, eggs and some sort of onion to toss together. The brown rice actually had just the right chewy, tougher texture that makes leftover white rice perfect for frying. It’s not much, a little no-brainer of a recipe, but this version is exactly how I made it the other night. It always comes in handy. 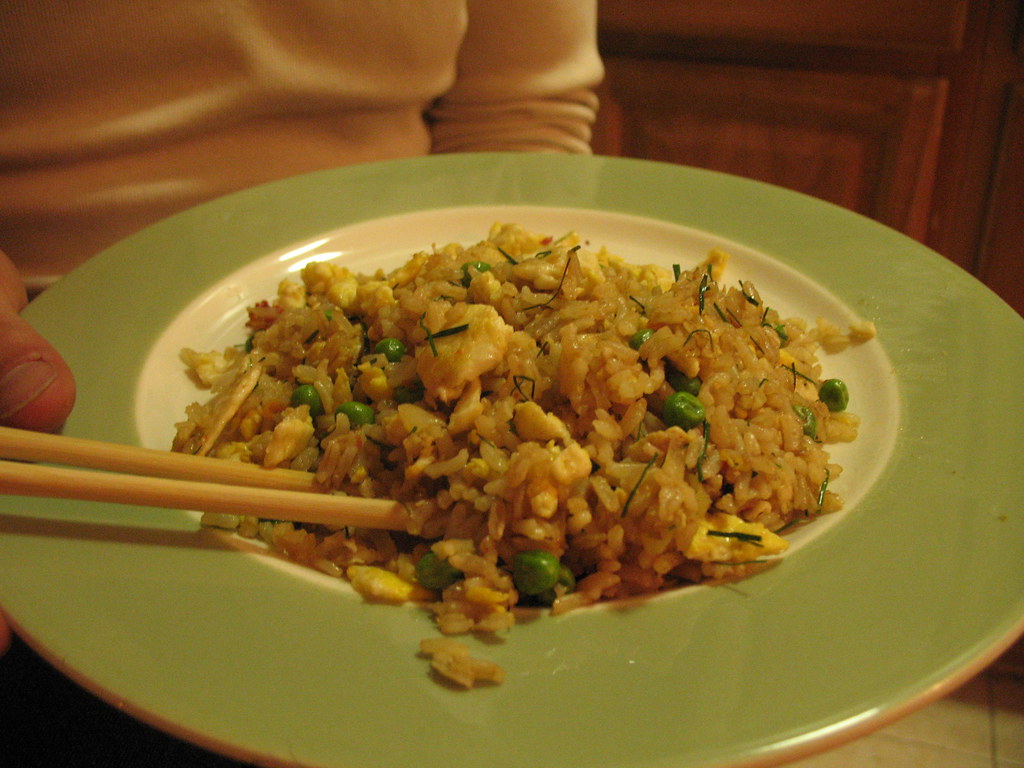 the impromptu dinner is served

Heat up half a tablespoon of the oil in a large nonstick pan. Scramble the eggs, breaking into chunks with the end of a spatula. Do not overcook, as they will be added back to the pan later. Remove eggs from pan and reserve in a bowl. Heat up the rest of the oil with the sliced onion over medium heat for 1-2 minutes. Add the rice, peas, soy sauce, chile sauce, white pepper and salt and stir over a medium-high flame until well combined, about 2 minutes. Add the egg and continue to cook another minute while stirring. Taste for seasoning, adding more salt or anything as desired. Add the chives or scallions, toss once more, and serve.

Five brownie points: This one’s kind of a wash — it doesn’t have too much healthy stuff going for it, but then it doesn’t have much unhealthy stuff either. The eggs will give you a little protein along with minimal fat, and the greens provide scant vitamins. At best, it’s a building block for adding whatever fresh veggies (or meats) you’d like. I often slice up some cabbage to go in fried rice or noodles, which cook up almost clear and fairly flavorless, but provide a bit more nutrition.

Four maple leaves: Again, it’s pretty weak. The eggs are local and cage-free, but the rice’s been shipped in from afar (as for the peas, which are not yet in season). The final leaf point goes for the pseudo “chives” that I sometimes sneak into dishes. It’s onion grass, wild garlic shoots, whatever you want to call them — fresh, local weeds foraged from the park.