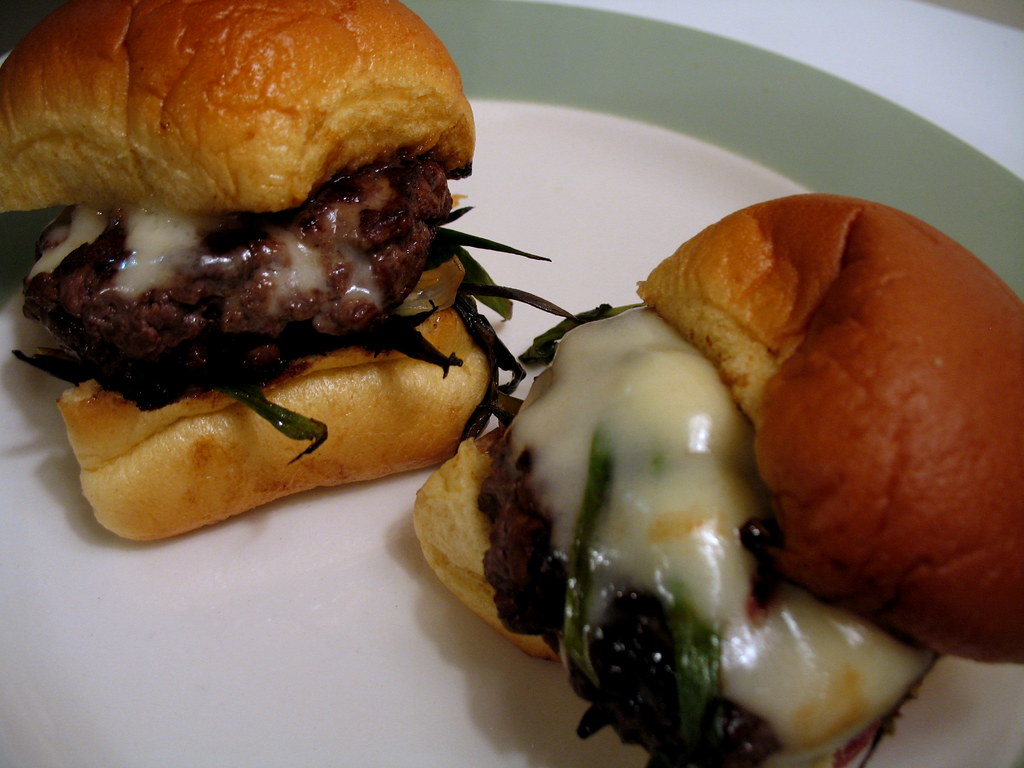 After diving into pig fat and liver for that pâté, I wasn’t sure I was quite ready to grind up any more meat for a while. Lately I’ve been eating (and necessarily cooking) meat only once a week or so, like a pious, puritanical soul, though I couldn’t care less what day it falls on that I do. With all the disconcerting news about mistreatment of cattle in slaughterhouses and meat contamination scares eating away the very fiber of our agricultural system, eating beef wasn’t exactly high on my priorities at this time. I feel that as a nation we overproduce it, overeat it, and generally abuse it. So why did I make a coupla burgers?

First, there’s a small, Dominican-run butcher shop in my new neighborhood that’s frequented by locals – which would now include me. There’s a reason small butchers exist despite the plentiful Styrofoam- and Saran-wrapped hunks of meat inside grocery stores on the very same blocks: quality. Freshness, cleanliness, taste — all that stuff is what keeps people coming back. Granted, I wouldn’t think this place sold organic meat, and I don’t speak enough Spanish to ask where their meat came from or how the farms’ animals were raised. (This is why I don’t eat too much meat these days – if humanely raised, eco-friendly varieties are too far away, or too expensive, I simply don’t buy it.) But I’d been meaning to try this place out, as there aren’t many of them around. From the outcome of these tasty burgers, I don’t regret it, either. 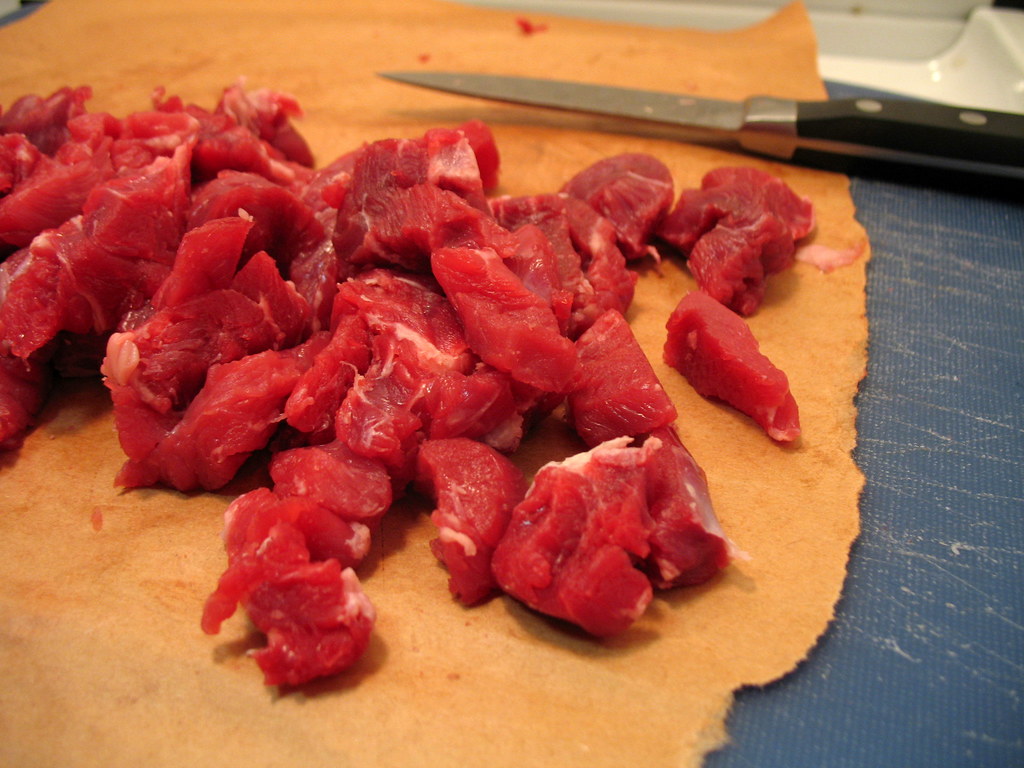 chuck gets a quick hack job 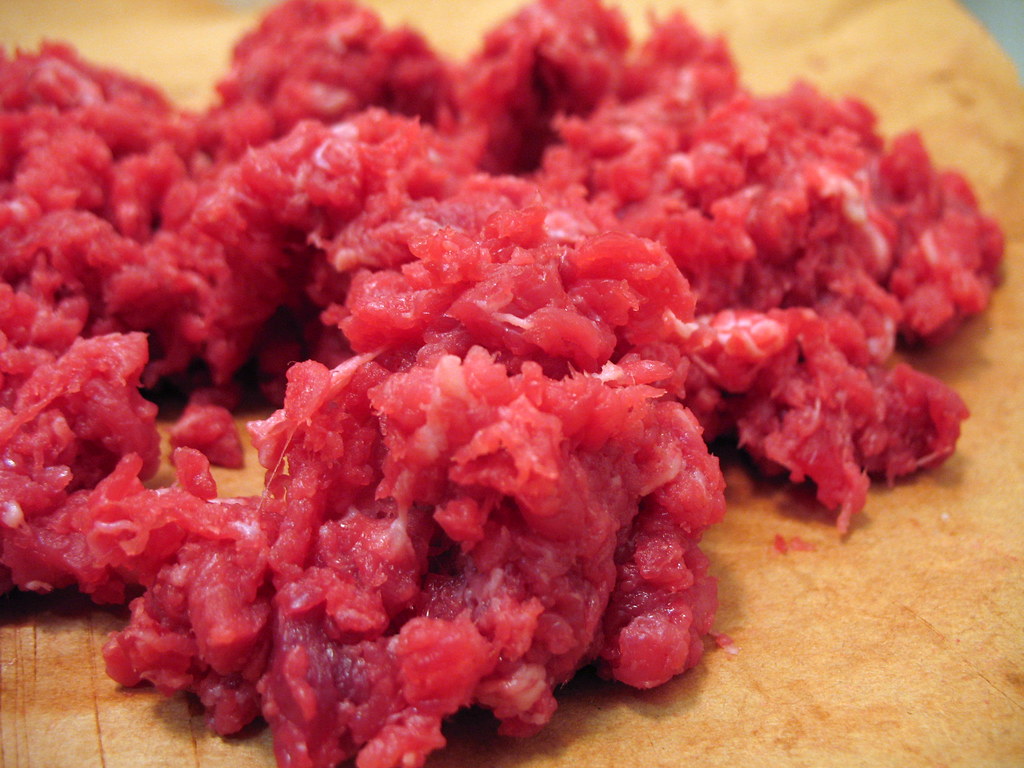 and a spin in the food processor

Second, I’ve taken cues from the pros and decided to make my own ground beef, using a slab of chuck steak and a food processor. It takes seriously all of two minutes to cube that red, lean meat up and pulse it a few times. Plus, I like to trim ALMOST ALL OF THE FAT. Yes, that’s right, you Shake Shack burger-swearing bullies. 80/20 the ideal meat/fat ratio? Not for this waistline. When I grind the meat myself I don’t even miss the taste that fatty equation provides because I’m tasting distinctly fresher, real steak, which I’ve lightly marinated and cooked to a juicy medium-rare because I can (unlike with pre-ground beef, which carries severely higher risks of contamination than steak cuts and must be cooked to at least medium). Not to mention the final patty is pleasantly nubby and rustic because it has these irregular larger chunks in it. It’s a lot like steak, only softer. 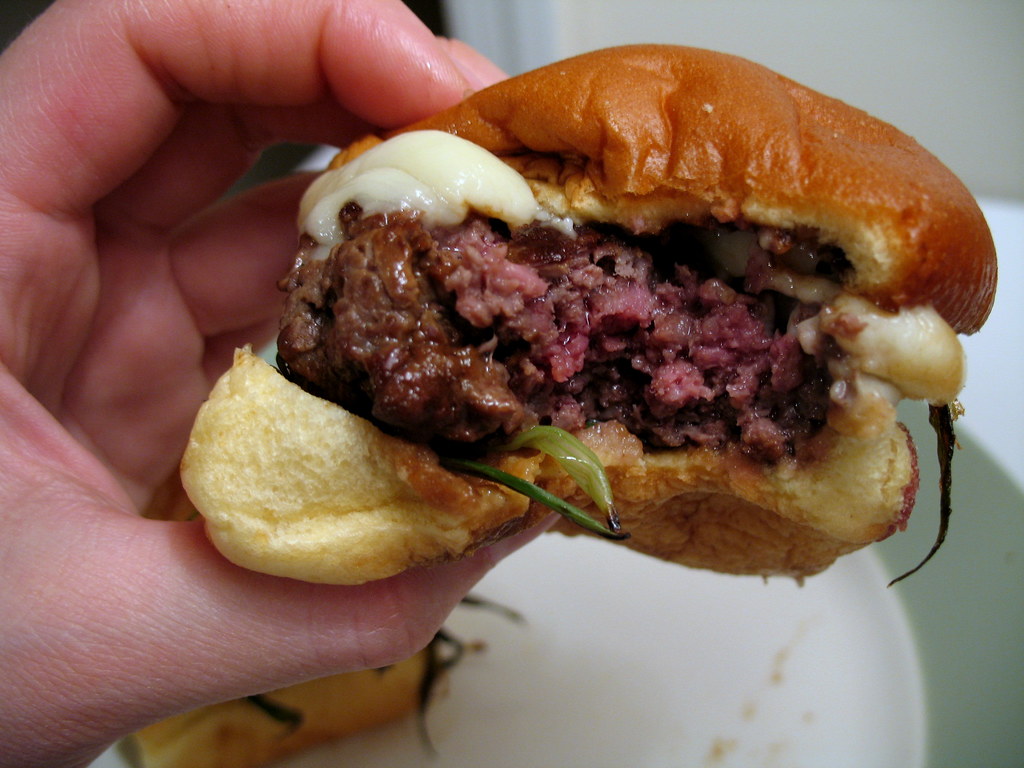 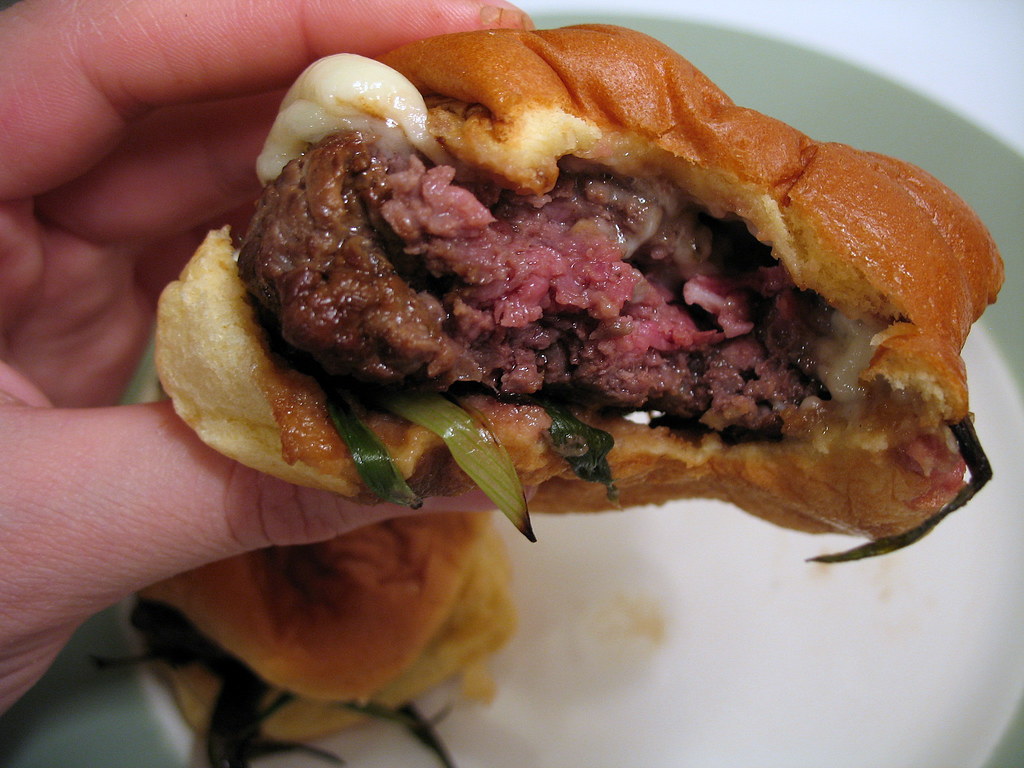 But the third, and most important catalyst for this spontaneous burger night was an email I received on Monday from Nick, of Beef Aficionado. He wanted to share his recent post on home-cooked sliders, and the recipe and photos on it looked like a lot of fun. It’s been a while since I’ve thrown a patty on the pan, and this sounded like the perfect weeknight treat. 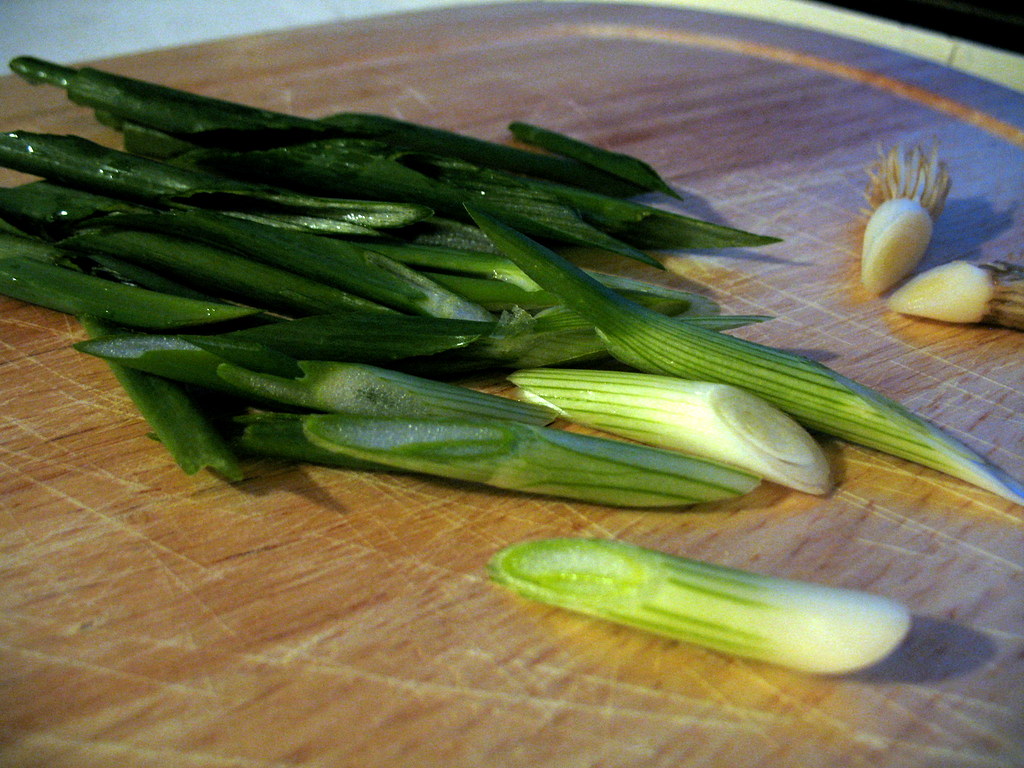 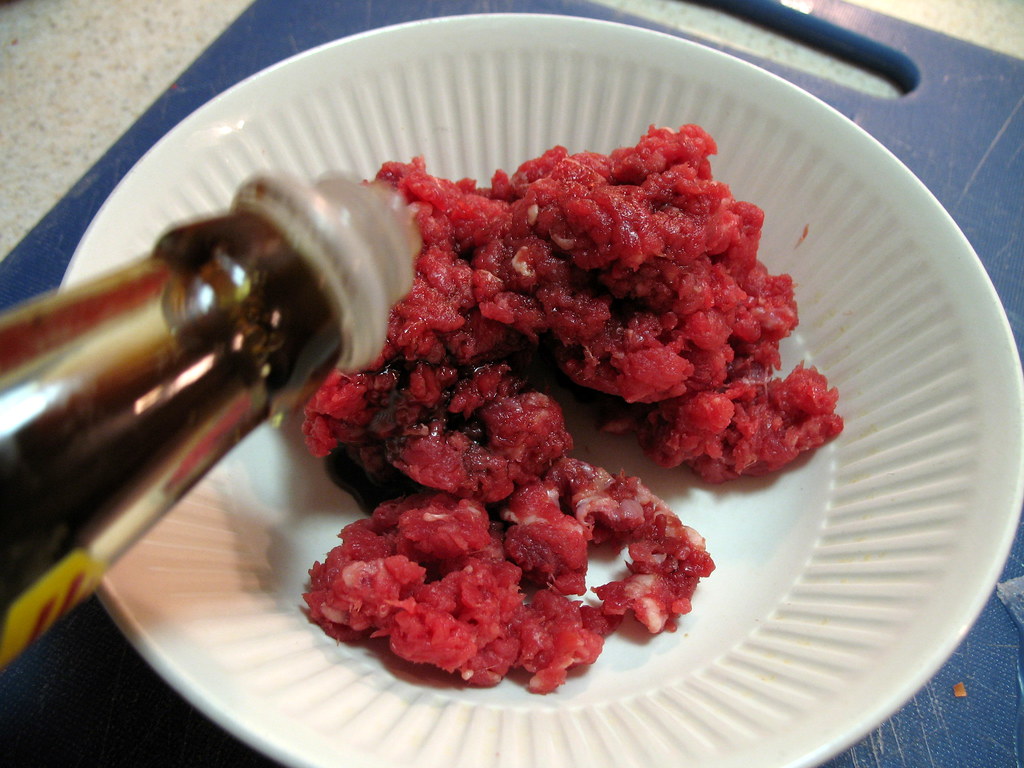 I started by buying a pack of small potato rolls, prescribed the perfect size for sliders. I then continued to monkey the traditional slider-making techniques he so thoughtfully described in this post, but with some un-traditional fix-ins. I doused the raw beef with soy sauce and a little ground black pepper before balling it up. Instead of sliced onions, I smothered the sizzling balls with thinly sliced scallions and, going on a hunch, drizzled honey on top of the whole assembly before flipping the burgers over and squashing them down. I loved the trick of adding a ladle of broth to the pan and covering it while the cheese melted and the buns steamed inside for a minute. As for the cheese, I’ll gladly swap sharp white, all-American cheddar for the processed cheese food (sorry, “American” cheese eaters) any chance I can get. All told, it was an awesome, if somewhat escapist, night’s dinner. 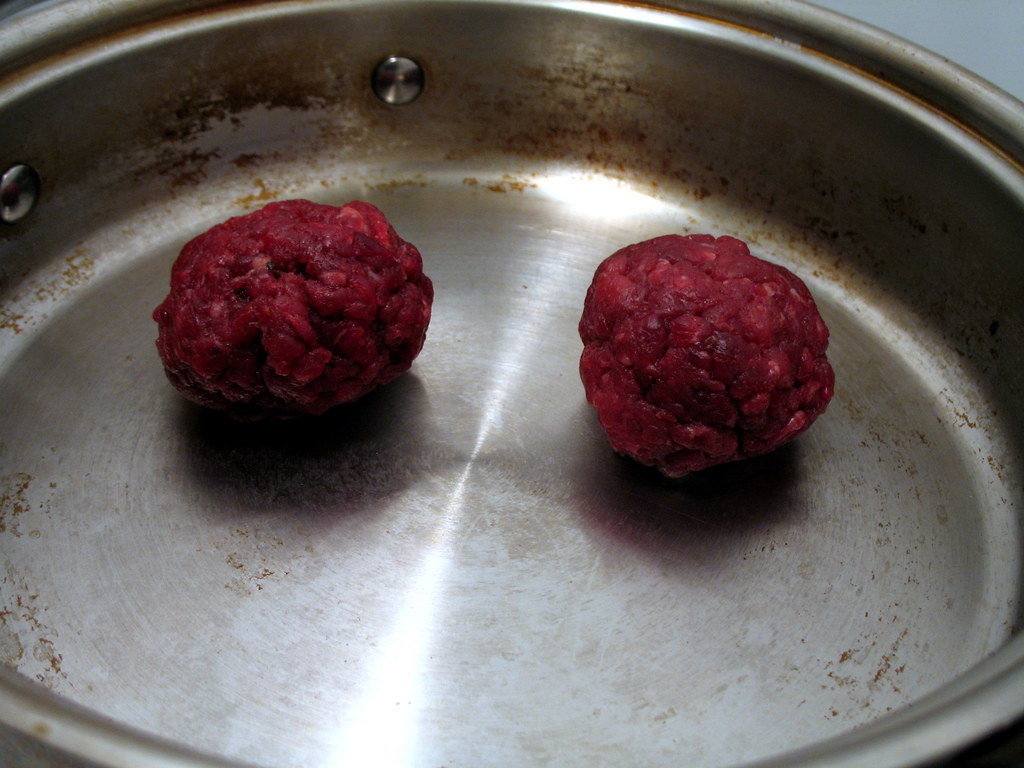 how to pitch a slider: begin with meat balls 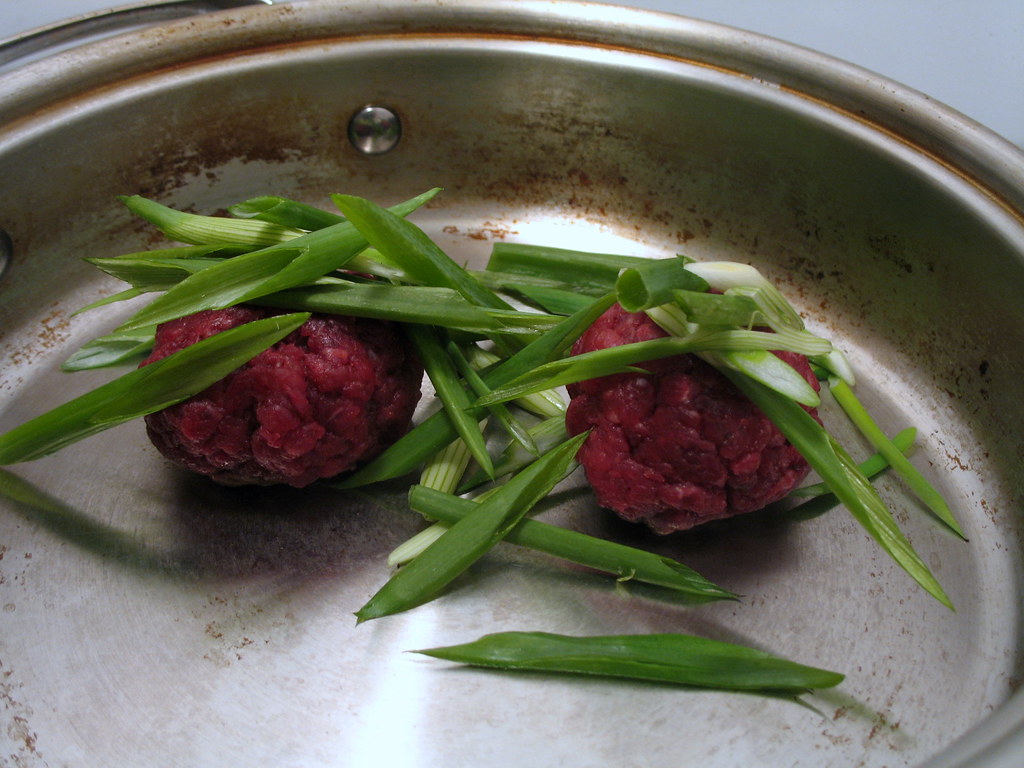 scallions go down, followed by a drizzle of honey 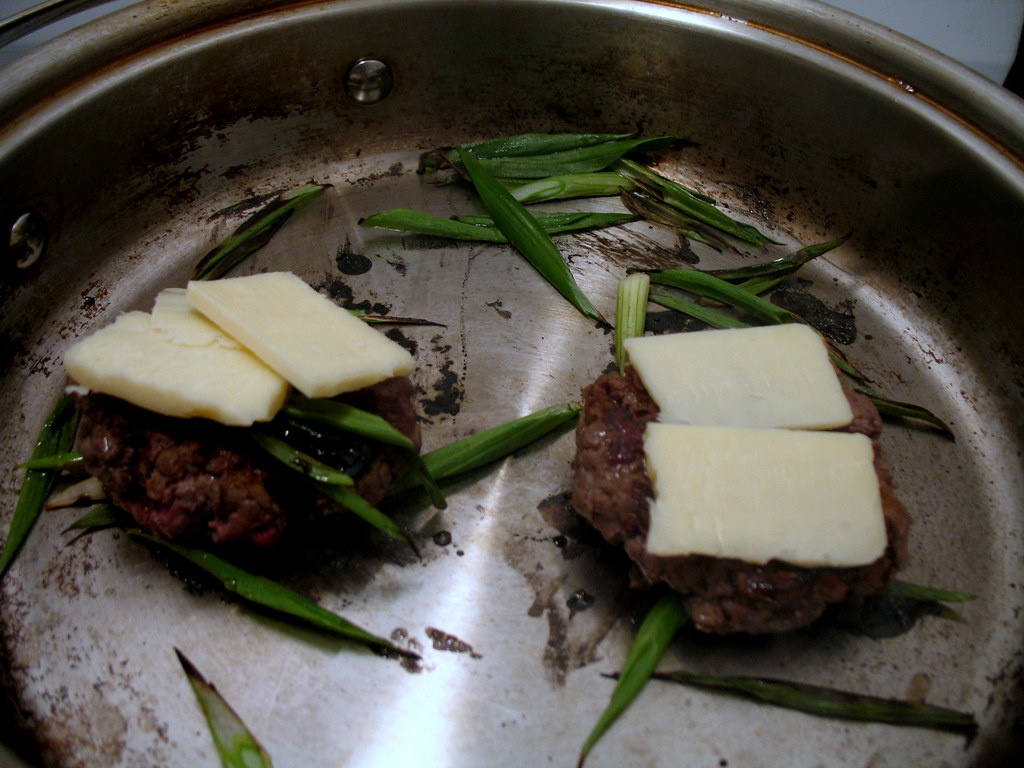 a flip and slight smash later 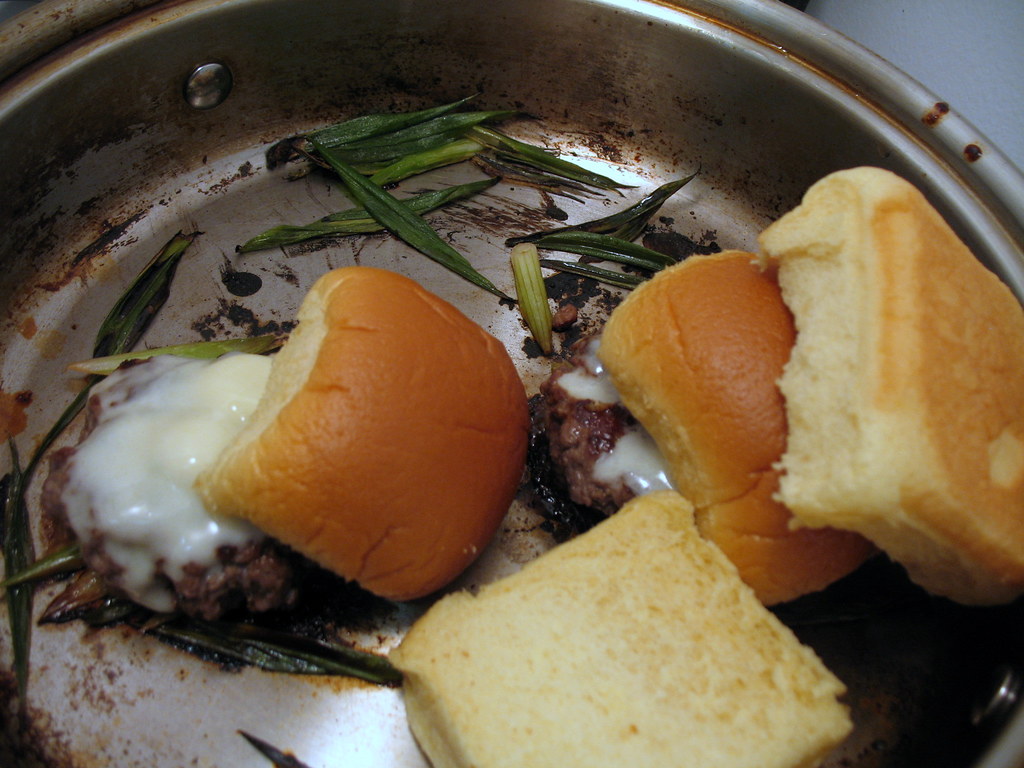 after a quick steam in broth, ready to plate

I might not have fully contemplated the issues surrounding the bovine dilemmas as of late, nor provided a very compelling example for those who are feeling wary and conflicted about eating beef as I’ve been. But I’ll be darned if a little dollop of honey on an unsuspecting slider doesn’t brighten anyone’s day.

Note on the recipe below: Proportions for six servings are approximate, based on the amount of leftover ingredients from making just two (the perfect amount for one person). Also, it would be preferable to use a cast-iron pan that comes with a lid or a good stand-in for one. A heavy-bottomed stainless skillet with a cover will cook just fine, but expect a backbreaking cleanup. 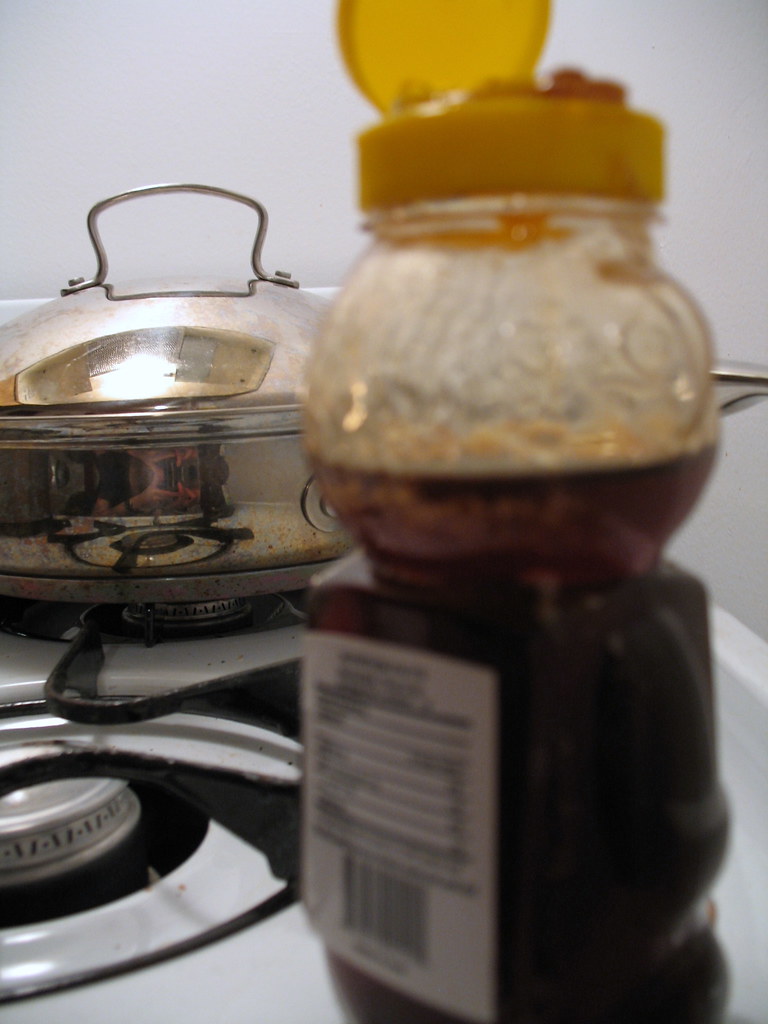 Put steak cubes into a food processor, working in batches if necessary. Pulse several times. Lift open to rearrange cubes if necessary or check for any especially big hunks. Once it’s reached a generally even, chunky consistency (probably no more than ten seconds combined in pulsing), remove with spatula and turn into a bowl. Scatter soy sauce and black pepper and mix briefly with hands. Form into about 5 or 6 (give or take) clementine-sized balls. Cover and set aside while you prepare everything else.

Heat up a heavy-bottomed skillet or cast-iron pan for 2-3 minutes over high heat. Place balls down and let cook about 1 minute. Sprinkle the scallions on top of the patties and top with thin drizzles of the honey. After another minute, flip patties with scallions on top, and press down gently with the back of the spatula. Place the cheese slices on top of each patty. (Lower heat all the way to low, or turn off, if smoke is going crazy right now and continue.) Place the top part of each roll on top of the cheese, and balance the bottom half of each roll on top of those. Pour the broth or water on the bottom of the pan and quickly cover. Remove the cover after 1 minute. (The liquid should be just evaporated and the cheese melted.) Place the bottom halves of the rolls on a plate, then scoop up the patties with the scallions, cheese and top rolls and place them on top. Scrape up any stray scallions in the pan and add to the burgers. Let rest a minute before digging in.

Seven brownie points: This rating might be shaved off by one or two points, if you make your patties as lean as I did. But keeping in mind that most people will probably opt to keep a little more fat, or spend a few seconds less trimming it away, I’ll keep the tally at a slightly unhealthy level. A burger splurge is nothing to be ashamed of, don’t get me wrong. And there are few foods that sate the appetite like a good steak. So with a minimal portion of it and a few good greens (consider a side salad if need be) the tiny twosome should be plenty to sate the stomach as well as nutritional checklist.