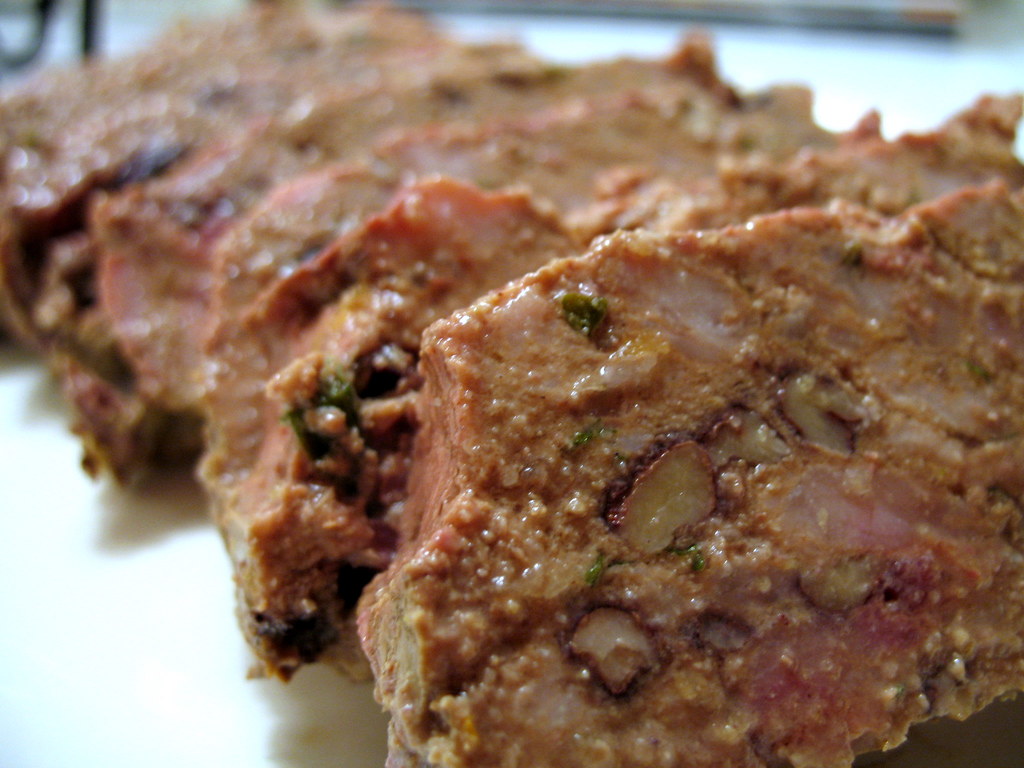 This weekend I was invited to a dinner party at the home of two friends (and award-winning chefs). The clever theme for the event was elevated fifties’ American cuisine: “We’re swapping out the cans of condensed soups, processed cheese, canned black olives and Wonder Bread, and are replacing them with homemade, organic, high-quality ingredients,” the invitation read. As I typed out my RSVP, I apologized for my late response because their email had initially fallen into the clutches of my spam folder. I stopped. Did I just write, “spam”? As in the fabulously fifties-esque potted meat product loosely related to spiced ham? Something in desperate need of reinvention? And here we go…

How does one spiffy up Spam? (Certainly not the way I cooked with it for the Bodega Challenge.) I considered making a fine meatloaf, but that was too different a category of food, and recipes and restaurants have been reinventing it to great successes these days already. An instant later, it occurred to me there is a classic French gourmet dish that is, in theory, strangely similar to the notorious luncheon meat: pork pâté. Hence, this project migrated from wanting to make something Spam-like to wanting to just make a really good country pâté with a little twist.

If you plan on making pâté at home for the first time (and clean up after it), know that you’re in for an incredibly greasy, slimy, odiferous experience, which is sort of fun in its own way. Let’s start with what you’ll need: a rectangular loaf pan will substitute for the classic covered French terrine. A pan that’s large enough to hold it half-submerged in water, like a roasting pan. Then there’s the meats. After finding a myriad of methods and ingredients among the online recipes for country pâté, or pâté de campagne, I referred to the 1961 classic, Mastering the Art of French Cuisine. The authors Julia Child, Louisette Bertholle and Simone Beck begin the chapter on pâtés and terrines with the bold statement: “The memory of a good French pâté can haunt you for years.” Wow, what was I waiting for? And then, before the first recipe, “A pork and veal pâté with decorative strips of veal and ham buried in its slices is the most classic of all pâté mixtures.” 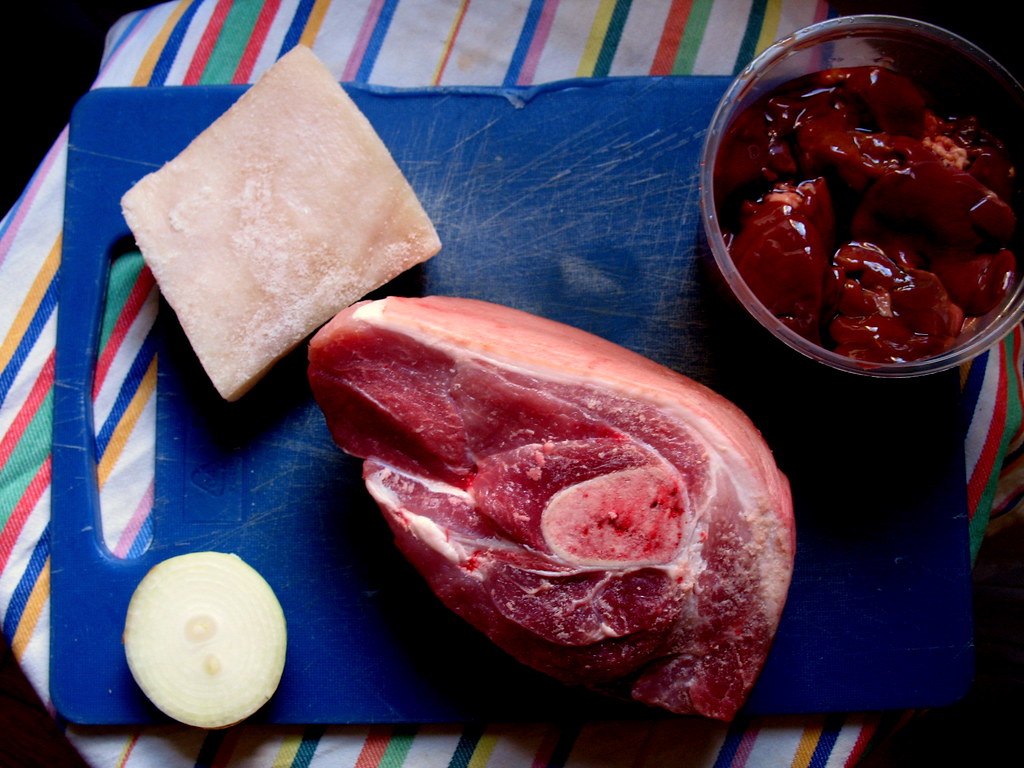 But I don’t really want to deal with veal, even though this is purported to give pâté its “lightness.” So I used the variation on the next page that integrated liver (chicken, in my case), and added a splash of heavy cream in the hopes of creating a rich, silky base stuffing. Instead of pistachios, which is the traditional optional nut, I sprinkled in chopped pecans along with dried cranberries for texture and tartness. Would it be enough to haunt? I hoped not in the wrong way, at least.

Child/Bertholle/Beck recommended the use of blanched salt pork or bacon as an alternative to the elusive fresh pork fat, so I got a slab of salt pork while at the butcher. I’m not sure why it isn’t called “salt fat,” since that would be a more accurate name for the block of glacier-white, stiff fat sprinkled with greasy flecks of salt. This was blanched and then sliced thinly to line the bottom and sides of the mold. I had some leftover afterward, so I chopped it up to use like those “decorative strips” buried in the chunky final slices. 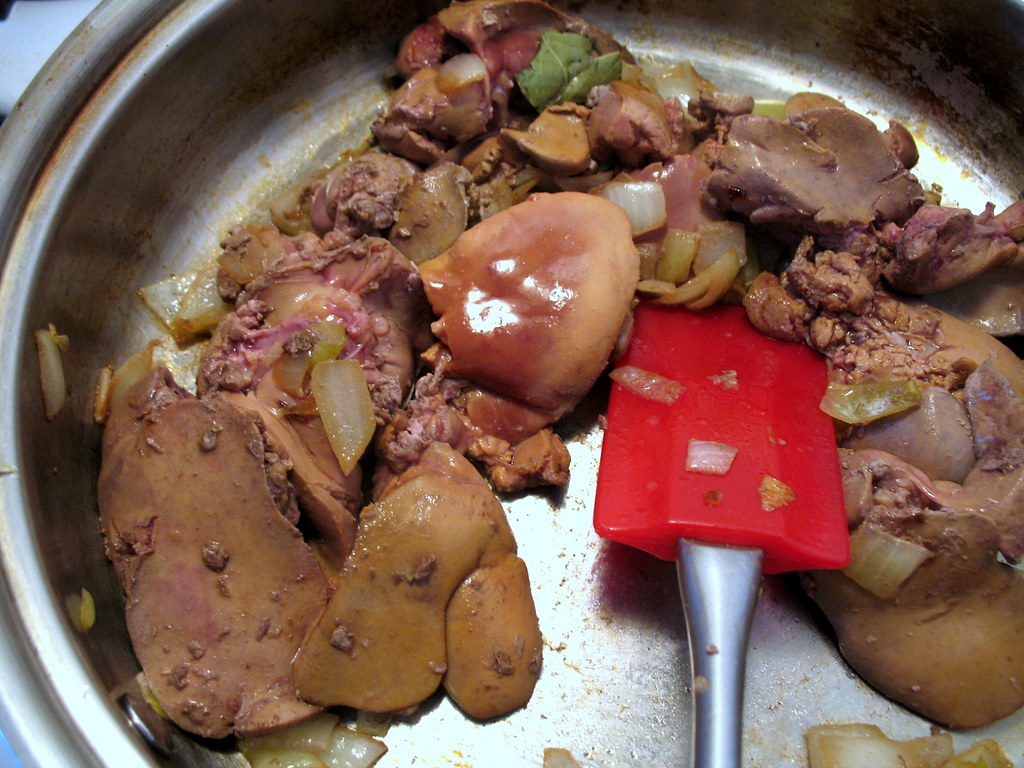 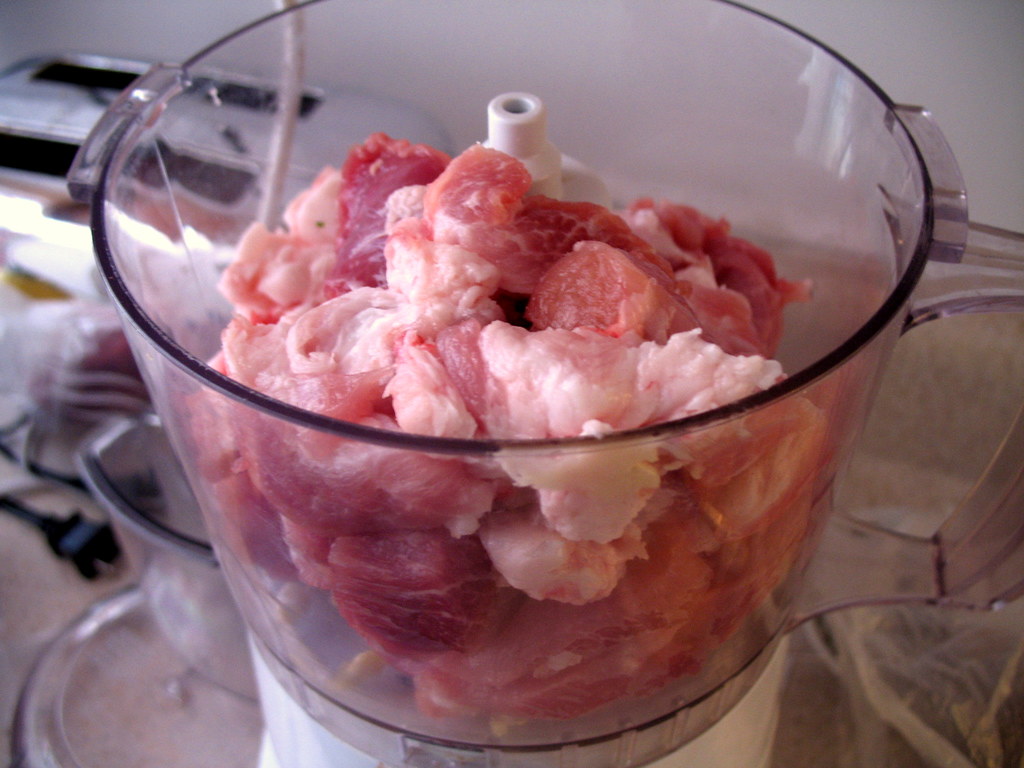 some of the pork gets a rustic fine chop, while the rest becomes pork paste 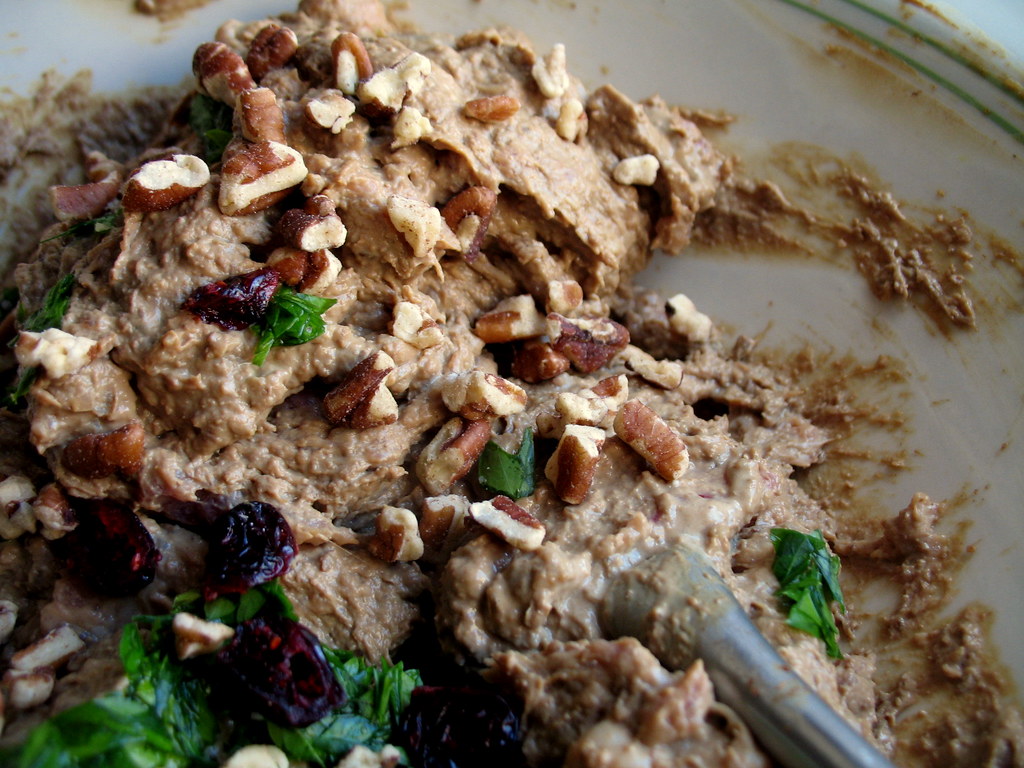 folding in the pecans, cranberries and a little parsley

Remember to give yourself plenty of time to make a pâté, too. The most difficult challenge for me was trying to figure out how to press the thing down while it cooled and then chilled, after baking. You’re supposed to have bricks this day in age of cooking, but I have yet to come across one in kitchen stores or on the street (I guess that’s a good thing). I finally found a book with the perfect trim size to place on top of my foil-covered pâté, which I weighed down with a bunch of things, eventually. 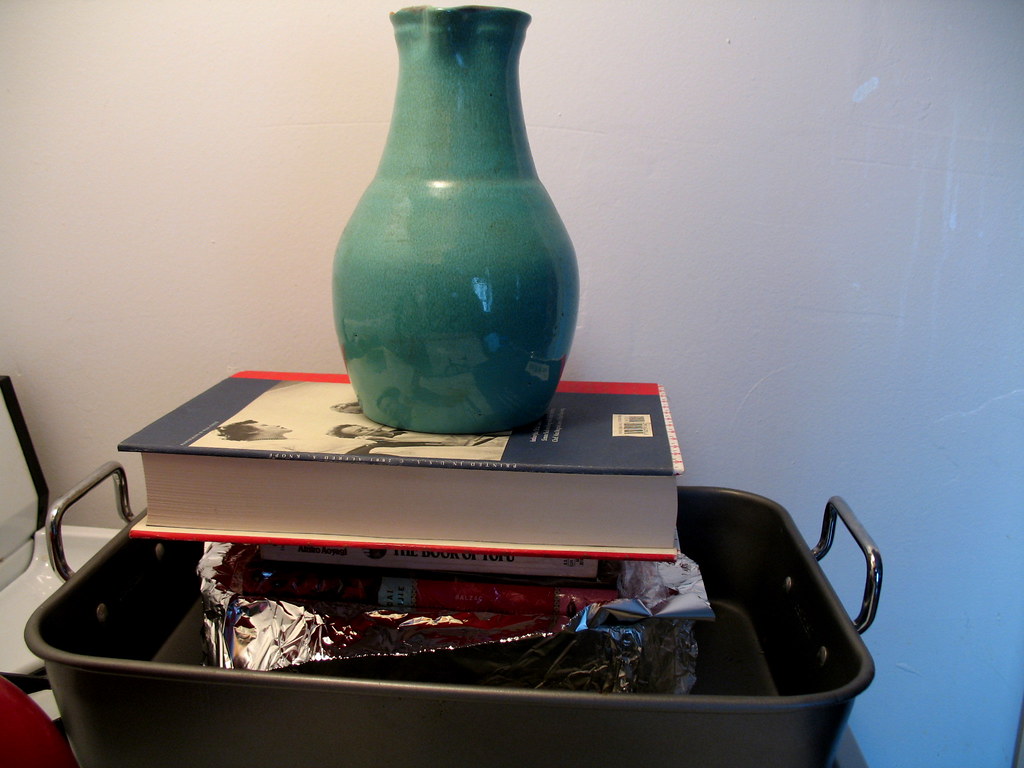 a towering stack of stuff presses down the pâté

I had just barely enough time to let the pâté chill completely before heading out to the party. David and Shana’s apartment was decorated with photocopied pages from kitschy fifties’ cookbooks, with their commentary written about the recipes. On the table was a gleeful display of fifties’ food mockery, complete with little penguin decorations, as seen in a dated photo. (The penguins were created from hard-boiled eggs and black olives — two ingredients that proved emblematic of the spread.) A green bean casserole with fresh green beans wasn’t bad, after all. The coconut cream pie was downright delectable. And then I gorged myself on an Ambrosia salad made with mixed fruit, whipped cream, shredded coconut and a sprinkle of pecans on top. (The drink of the night, the Grasshopper, wasn’t bad either.) 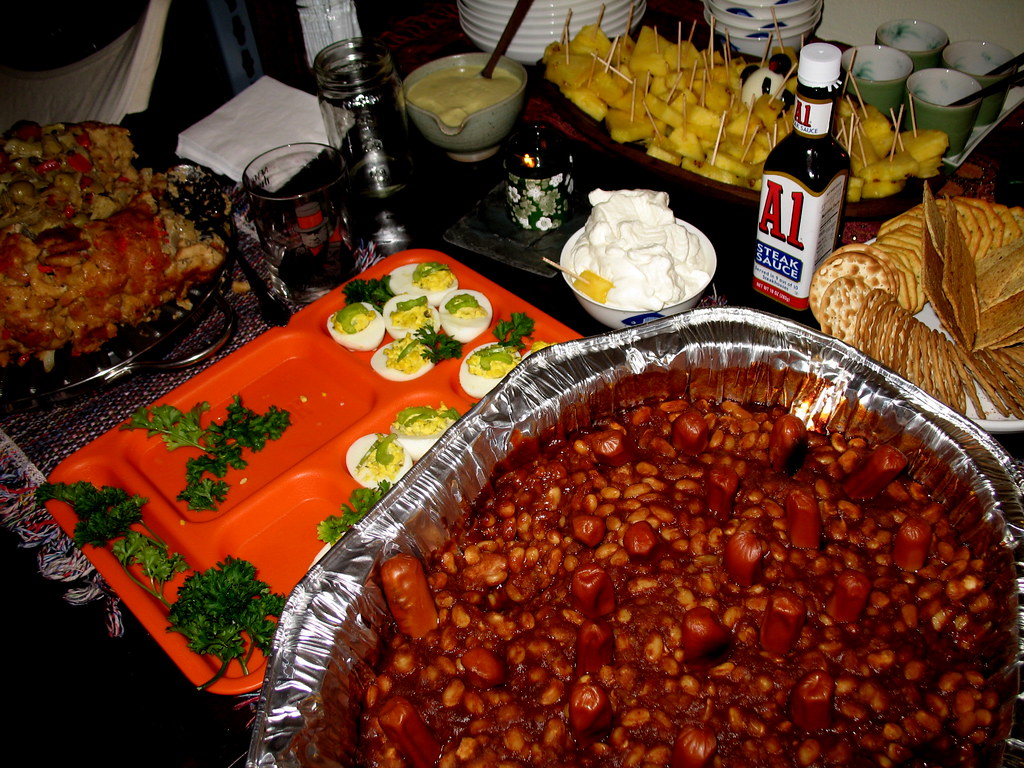 a plentiful, and unpretentious, pork and beans platter

presentation is everything: an egg-and-olive penguin 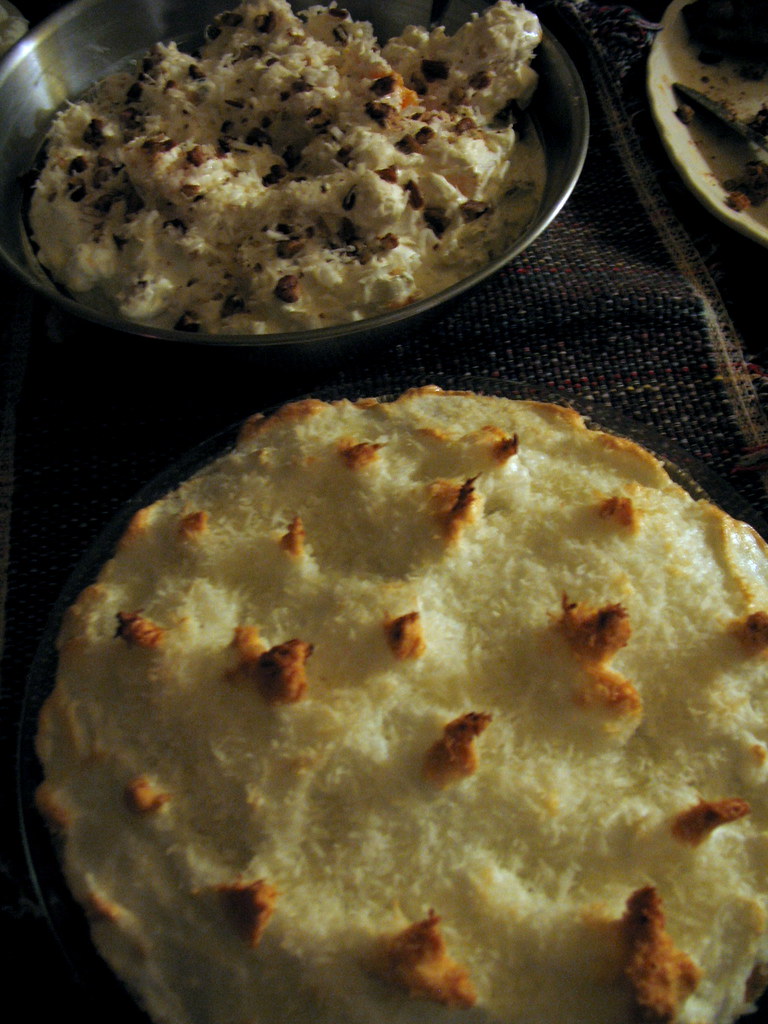 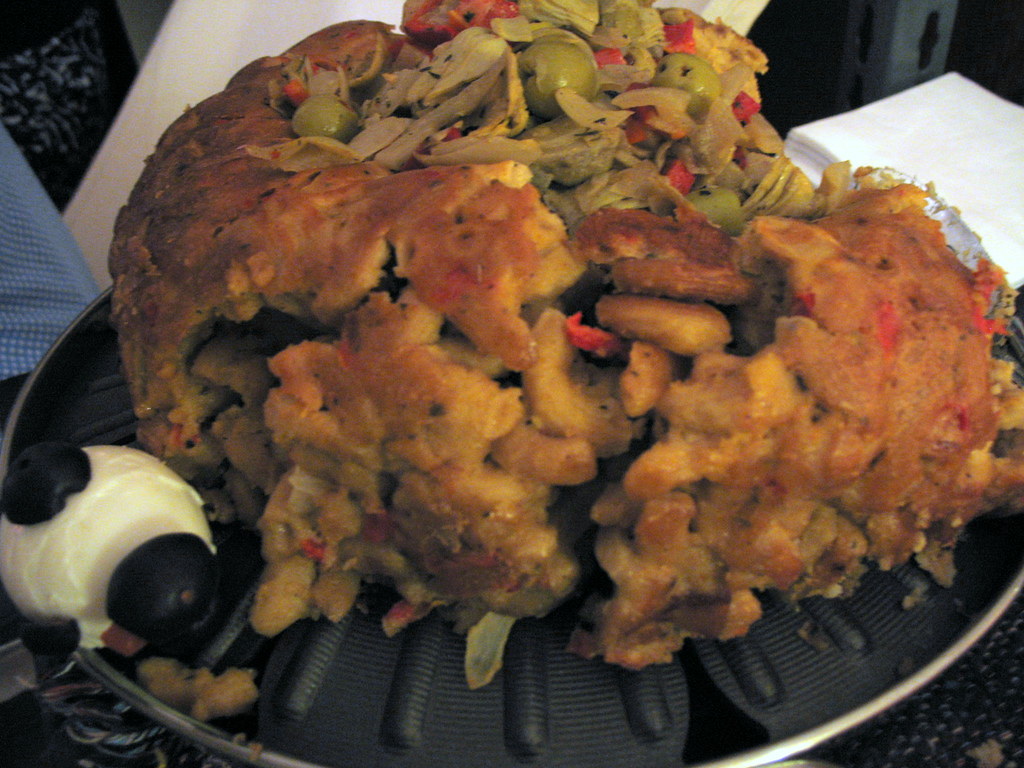 I have no idea what this was, but it had macaroni on the outside 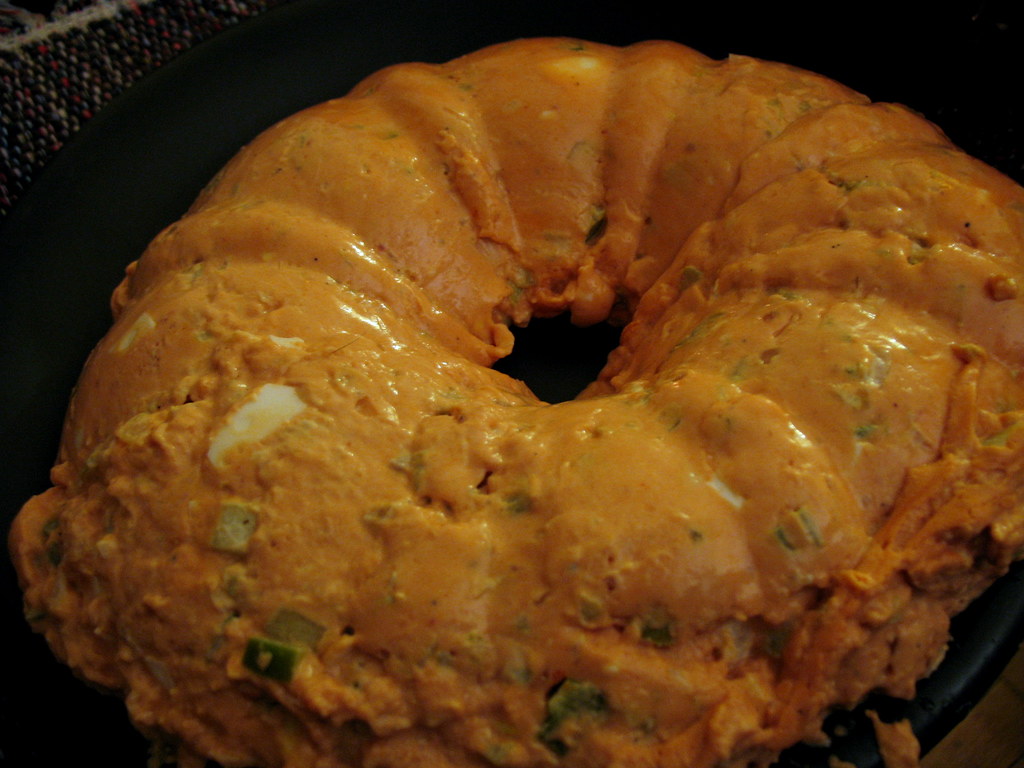 Yet after sampling all these preposterously molded, mayonnaised and technicolored munchies, I’ve decided that American fifties’-esque food is just not something I very much like. Better executed versions, with better ingredients, were definitely more palatable, and in some cases fairly tasty. But I question the prevalence of mayonnaise in nearly everything involving vegetables, and shrug my shoulders to elaborate serving aesthetics that seem to look to volcanoes for inspiration — better to leave those to (elaborate) desserts. I half expected to come home with a full tray of pâté, too, since there were many vegetarians at the party, but I was pleasantly surprised when it was all gobbled up. And, by its final taste. I won’t be making this very often, haunting as it may be, since it’s simply not the most healthy, nor cost and time-efficient delicacy there was. But it was certainly worth the while this time.

Oh, and I went for the Pink Lady-but-in-turquoise look. 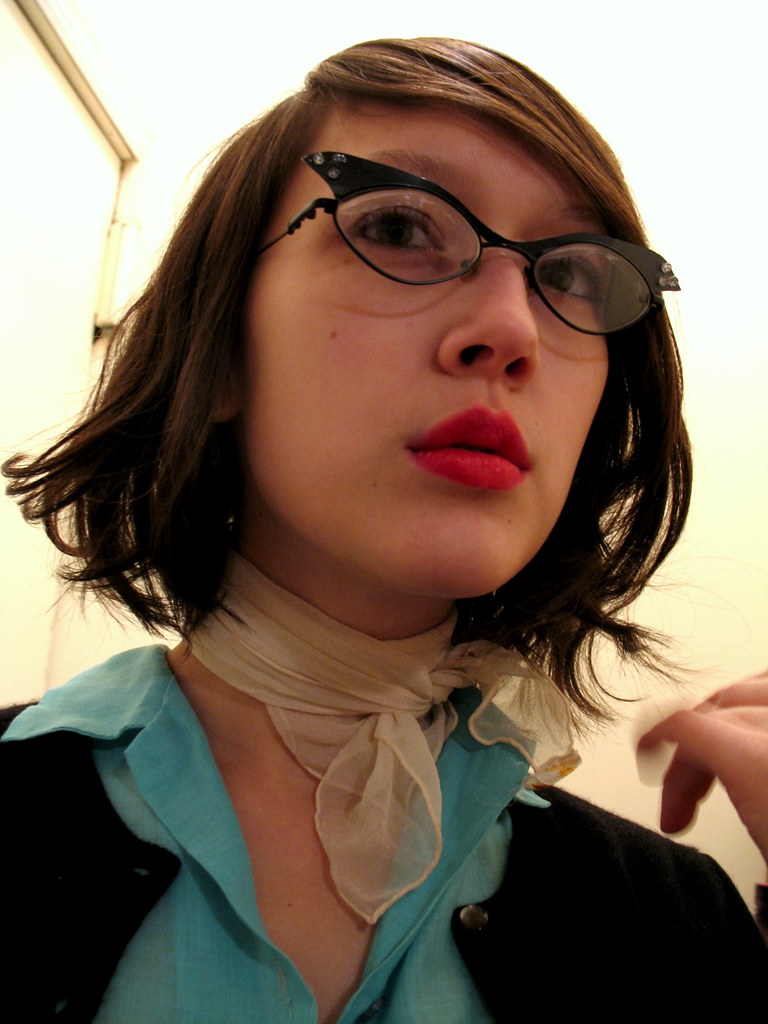 brunettes really do have more fun

Country Pâté with Pecans and Cranberries
(makes one loaf)

Heat the butter in a large pan and cook onions over medium-low heat until translucent, about 8 minutes. Add the bay leaves and the livers and cook, stirring, until the livers are just firm but still reddish pink inside, about 3-5 minutes. Transfer to a large bowl. Add the Sherry and cook to reduce it by half, about 2 minutes. Pour into the bowl.

Chop half of the pork shoulder pieces very finely with a good sharp knife. Put the rest of the 1″ pork pieces into a food processor and pulse several times, stopping to scrape down the mixture, until relatively smooth. Set pork aside. Pulse the garlic clove in the food processor until finely chopped. Remove the bay leaves from the liver mixture and discard. Add the liver mixture to the food processor and blend until to a smooth paste. In the same bowl it was once in, beat the egg with the cream. Add all the spices. Return the liver mixture to the bowl and mix together with both pork mixtures with a spatula or wooden spoon until evenly combined. Sprinkle in the pecans, cranberries and parsley and fold in.

Preheat oven to 350 degrees. Blanche the salt pork and let cool before slicing into thin strips. Line the bottom and sides of a rectangular loaf pan or terrine with the salt pork slices as evenly as you can (it doesn’t matter too much). Pour the pâté mixture into it and spread it evenly on top. Cover tightly with foil. Place the loaf pan/terrine inside a roasting pan or another large pan filled with enough boiling water for it to reach half the loaf pan/terrine’s height. Bake for 1 1/2 hours (or slightly less if your pan is quite long and skinny; slightly more if your pan is more bulky in shape).

Remove from the oven. Drain the roasting pan, and place the loaf pan/terrine back on top of it (to catch drips while it cools/gets squeezed). Cover with another protective layer of foil. Try to find something that fits the top of the pan, like a book — or a brick if you have one — and place it on top of the foil. Stack heavy things on top of it so that the pâté is weighted down while it cools. Cool for an hour or so at room temperature, then transfer it to the refrigerator to chill at least another three hours, still weighted down. (Can be chilled overnight.) Serve with crackers.

Cost Calculator
(for about 8-10 appetizer-sized servings)


Ten brownie points: Disgraceful. I’m all for consuming all parts of an animal, but some parts — namely, fat — are just not good for you. Maybe it’s their secret weapon, like a killer bee, the pig smirks at us in their afterlife by clogging up our arteries with all that fat. Chicken liver won’t help you out here, either. One ounce of it alone will give you a little over 50% of your daily recommended intake of cholesterol. So, sorry.