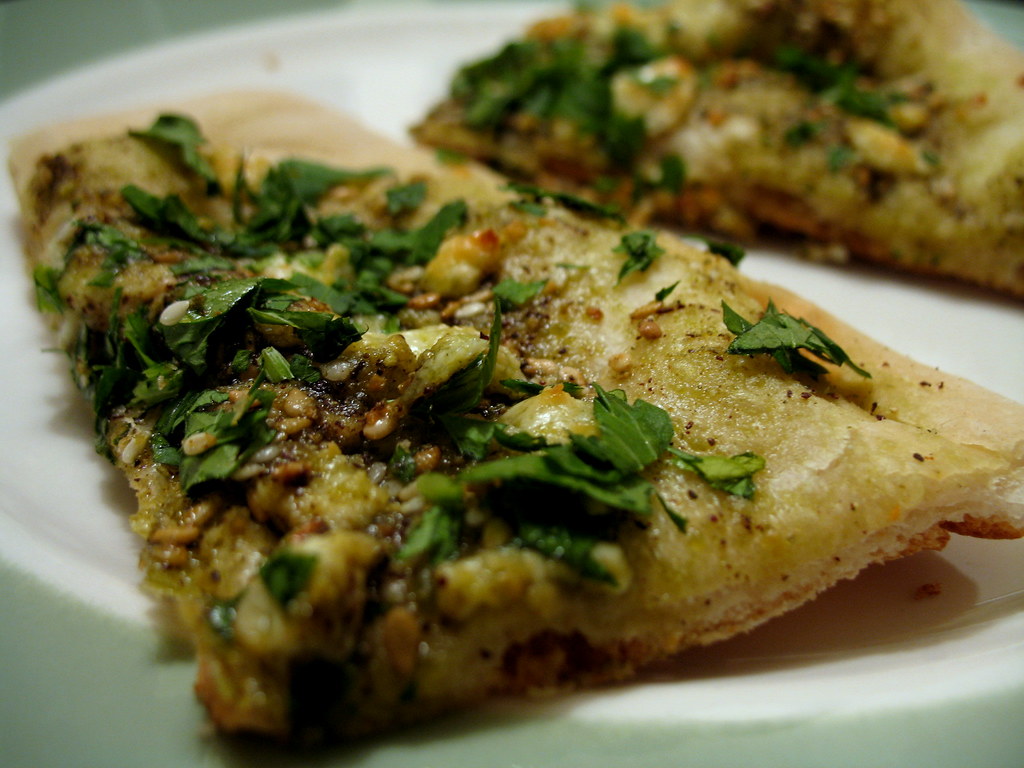 Last night I hosted a housewarming party at my new apartment. Each guest appeared at my door toting a bottle or two of wine, a six-pack of beer or the occasional small housewarming gift. Then, a new-ish friend of mine arrived and dug into her bag a moment. She whipped out a small Ziploc bag with a mound of moss-green, fuzzy-looking dried plantlife at the bottom.

My suspicions cleared, I excitedly opened the – ahem – little green bag and sniffed deeply. And here I am, less than twenty-four hours later (or twenty-three, if you factor in the daylight savings change) inhaling every bite of this freshly baked Za’atar bread. I’m high as a kite.

You see, Za’atar bread (also spelled Zaatar bread or called manakish) was an old favorite from my eating out in days, when I’d occasionally get it from a Middle Eastern restaurant called Zaytoons, which now has three locations in . A large pizza-sized wheel of this flatbread seeped in a savory herb and olive oil topping ran me around five dollars, and it was too much for one person to eat. (I have to confess also that once or twice, on the rare occasion when my ex felt like having take-out, he ordered a huge delivery from Zaytoons and didn’t have room to finish the Za’atar bread; so with guilt I helped him waste not.) Why it had not occurred to me sooner to make it at home is a good question. But once I had the key ingredient in my hands, a new, homemade version was already baking. 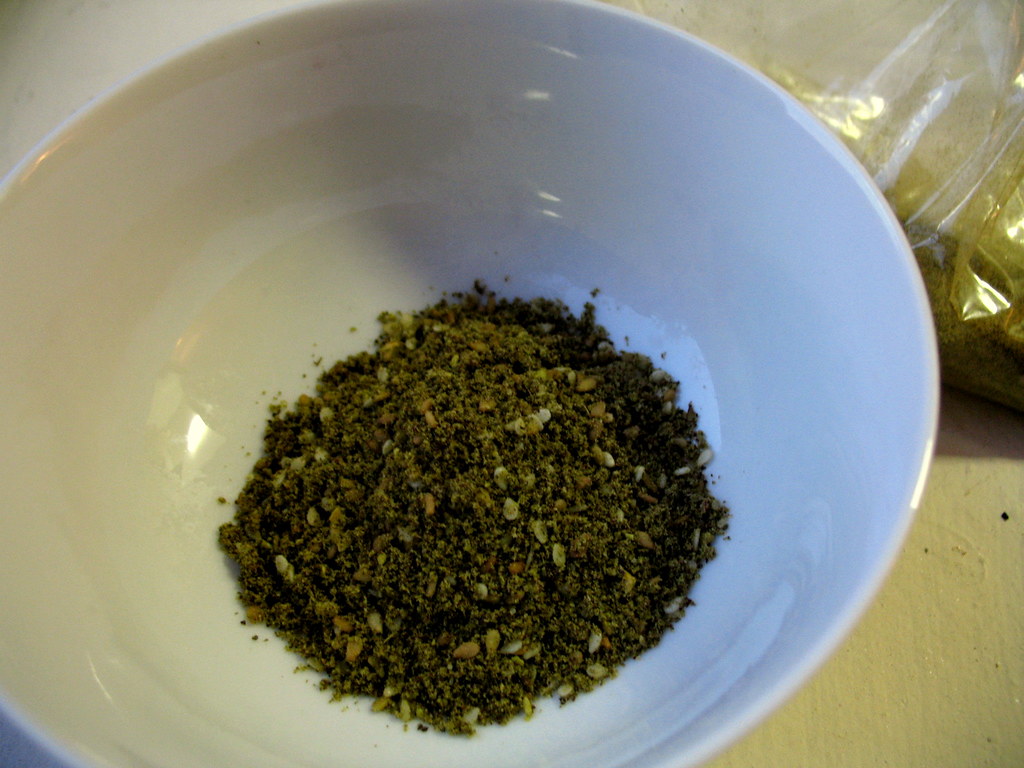 
My friend told me she’d brought back the spice mixture from a recent trip to . But, you don’t have to throw a party and hope someone will bring Za’atar from in order to enjoy the stuff at home. For one, Za’atar is commonly available in specialty or Middle Eastern food stores. If there’s a Middle Eastern restaurant in your neighborhood but not a fancy grocery, you might even want to try out the old pizza dough trick and ask the store if you can purchase a small amount of Za’atar. It’s worth a shot. Speaking of the pizza dough trick, I used just this to provide the bread in my recipe after discovering I had no yeast in my apartment. The local pizza shop was closer than the grocery, so I popped in there instead and bought a mound of raw pizza dough; without having to knead or wait for dough to rise, this was a really quick recipe. 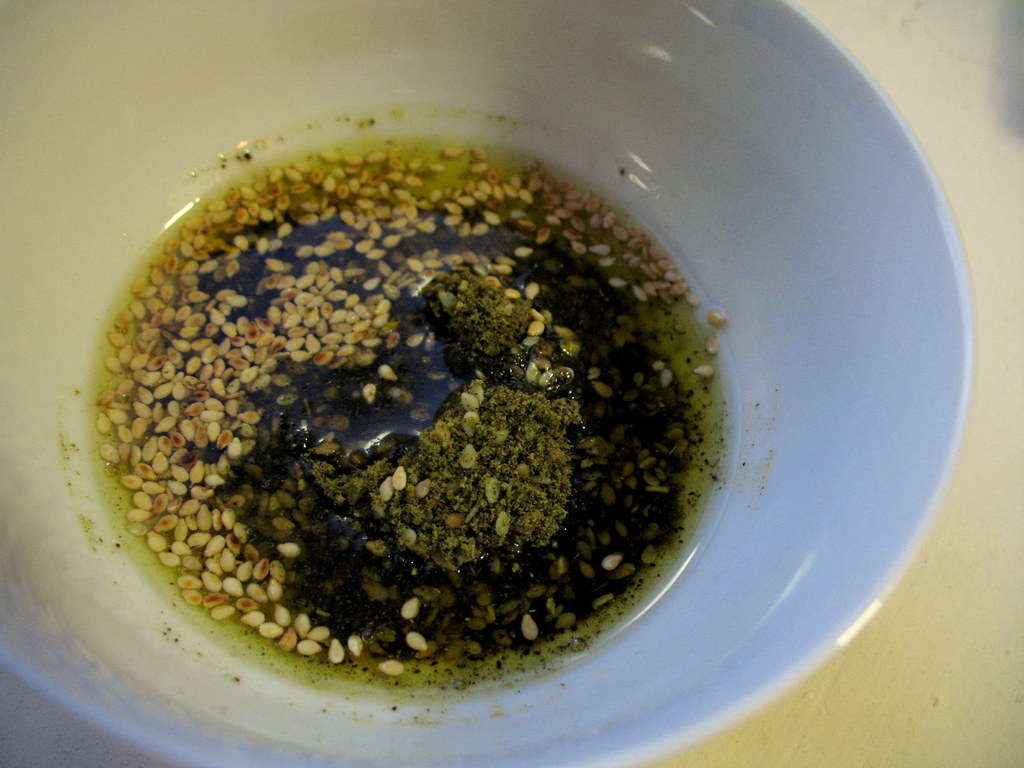 The other, and perhaps the easiest, way of procuring Za’atar is to mix it up yourself. Za’atar is primarily made from salt, sesame seeds and dried thyme, marjoram, hyssop, oregano or a mix of these herbs. The word Za’atar can also stand for whichever herb makes up its main ingredient, which varies regionally. I think there’s a faint reddish or brownish tint to the Za’atar in my bag from , and I detect a whiff of cumin. I read on Wikipedia that other spices are sometimes thrown into the mix including cumin and sumac, but I can’t be sure if either are present in my mixture, or even what its main herb is. For the time being, I’m happy to let some things remain a mystery, especially when they taste this good.

The addition of Feta on Za’atar bread is something that I borrowed from Zaytoons, where you could order yours with or without the cheese. The addition of fresh parsley sprinkled on top, after baking, is not. I had tons of it leftover from the previous night’s hors d’oeurves and thought it would make a nice complement. I added some extra toasted sesame seeds, too, since I just like them a lot and have some. I also finished my recipe with a squirt of lemon for a little extra tang and fresh flavor. Za’atar bread has a tendency of being starved for moisture, which makes your mouth gravitate towards the oiliest bits. 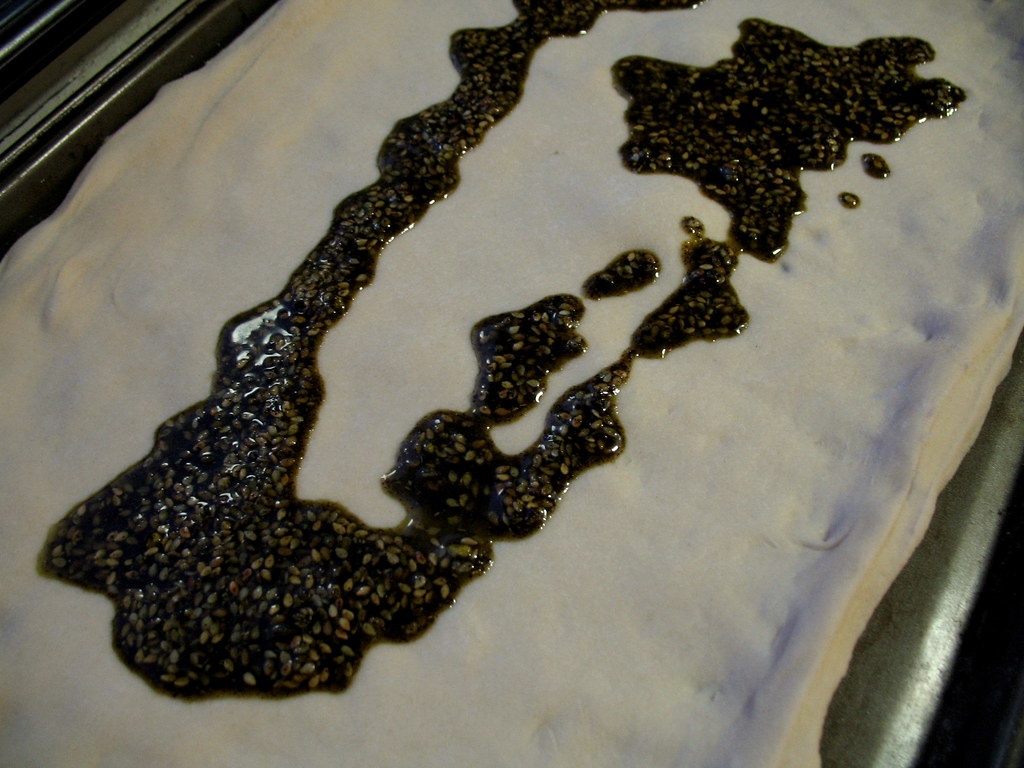 a slick of za’atar oil goes a long way

Actually, you don’t need a heck of a lot of olive oil to turn out a really mean Za’atar bread, as I’d imagined. Two tablespoons was plenty to first emulsify the ground herb mixture and then to slather it over the dough’s surface. I personally think that extra-virgin olive oil is one of the most needlessly over-used ingredients in our time, with restaurants pumping gallons into a simple plate of pasta, and television chefs encouraging you to drizzle it on almost everything, extolling its virtues for your cholesterol, your skin, your overall happiness and well-being at the same time. All the same, just remember that one tablespoon holds 120 calories. One hundred and twenty. 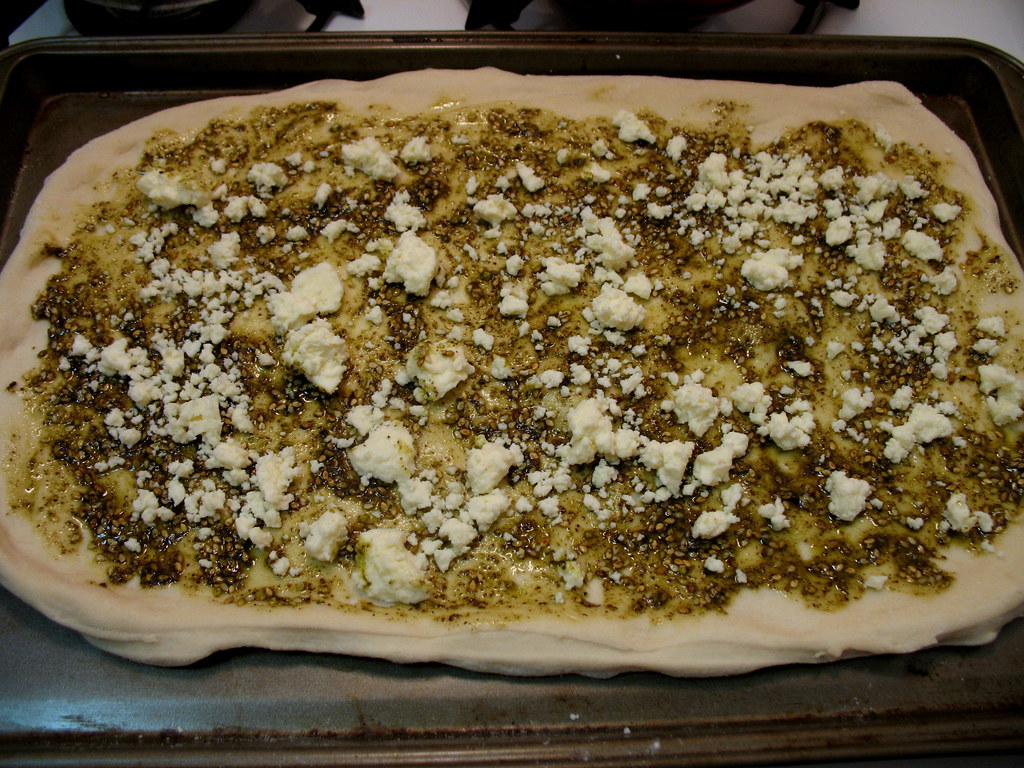 pre-baking and showering with parsley & lemon


Za’atar Bread with Feta and Parsley
(makes about 4 appetizer-sized servings, or two main)

for the za’atar mixture:
(Mix up a lot and keep it stored so you don’t have to with each use. Make sure that the dried herbs are ground first to a powdery, fluffy consistency in a spice grinder or clean coffee grinder.)

Preheat oven to 425 degrees. Stretch out the dough evenly and spread onto a round or rectangular baking pan – whichever you prefer. In a small bowl, combine the za’atar spice mixture, olive oil and optional sesame seeds. Mix with a spoon. Spread the resulting paste onto the dough. Top with feta crumbles. Bake for about 8 minutes, until the edges of the crust are just slightly browned. Remove from oven and top evenly with the parsley and the fresh lemon juice. Cut into wedges and serve.


Six brownie points: Despite the small amount of oil or fats, this is a salty dish. You’ll want to keep in mind when putting yours together that za’atar is already quite salty, so you don’t want to go too crazy with the Feta, which is salty too, and you also don’t want to overpower either one. That said, fresh parsley is a great source of all your deep, dark leafy green nutrients like Vitamin K, C, A, beta carotene and calcium, so go as crazy with it as you want.