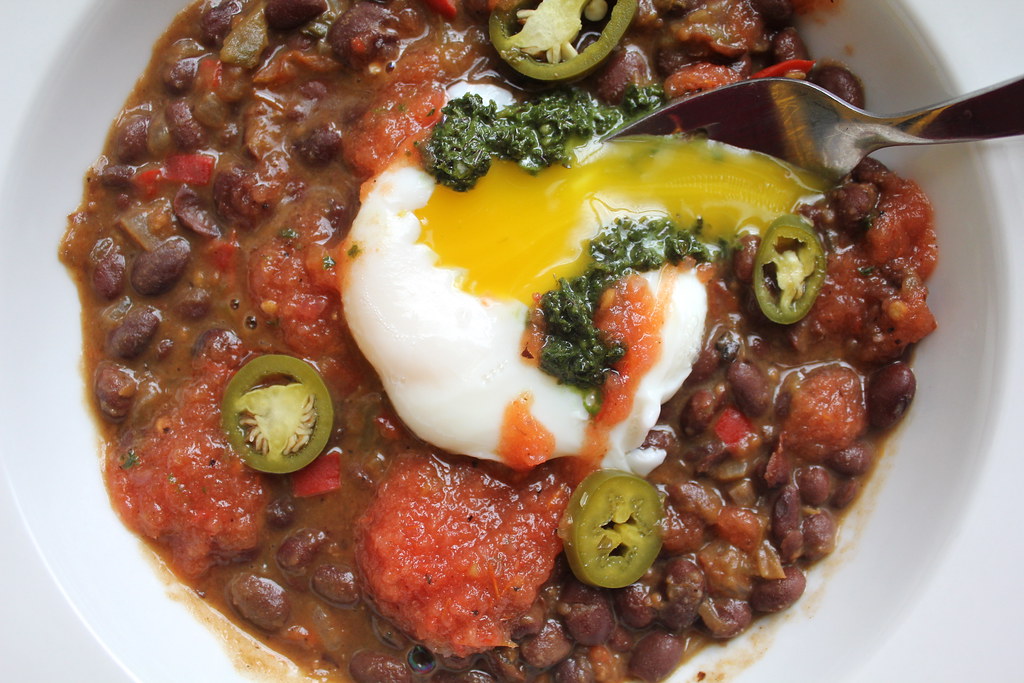 It’s easy to eat a lot of Mexican food in the late summer and early fall. You’ve got ripe tomatoes, corn, tomatillos, and chili peppers of all kinds. But it’s also easy to turn that idea into something really greasy, cheesy, and heavy; something more or less like nachos supreme (which we all know isn’t really Mexican but rather Tex-Mex as interpreted by fast-food and/or Midwesterners–taco dip, anyone?). So let’s take it back to a fresh, clean point of view.


Nothing against greasy or fried foods, but when you’re cooking at home, it’s often just so much easier, more intuitive, and less expensive to make the best of fresh ingredients with minimal preparation. And no, it doesn’t have to be a salad. 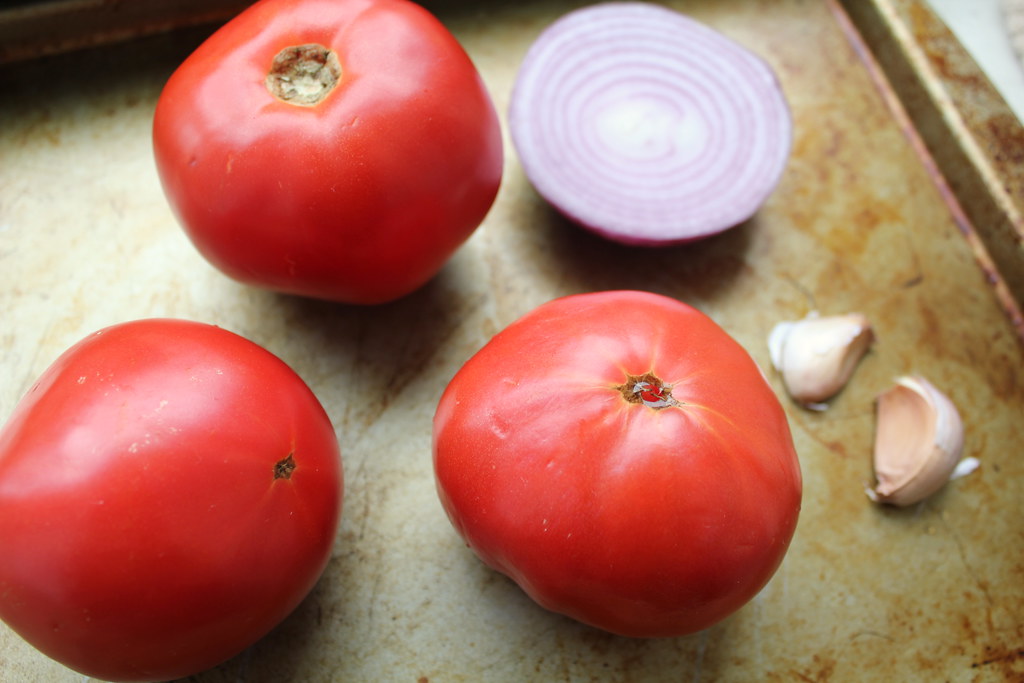 before placing under a broiler for 15 minutes 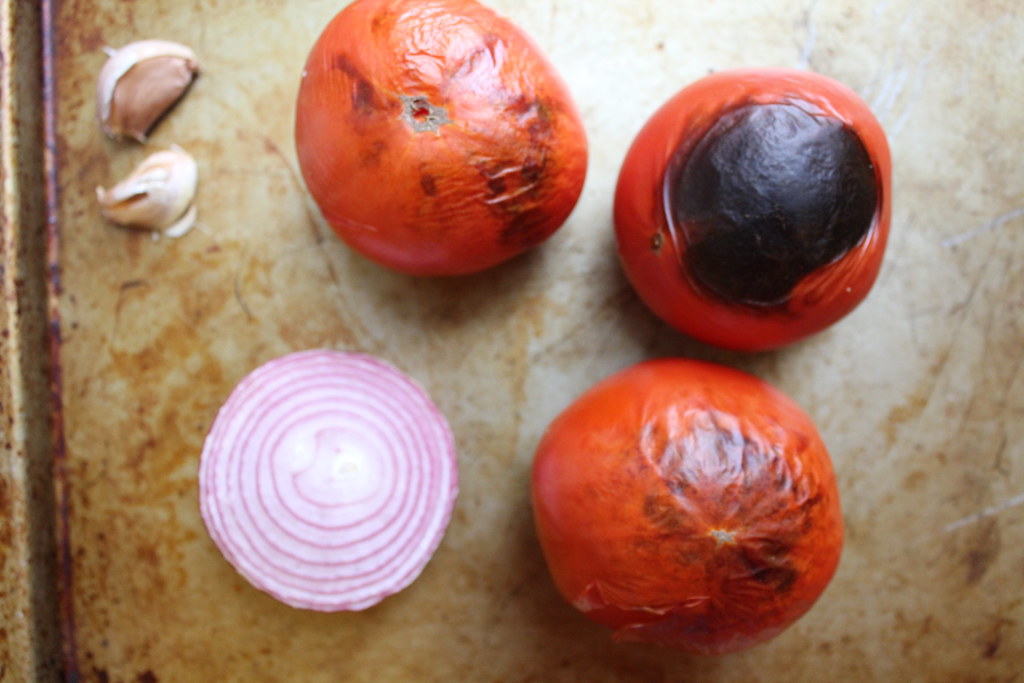 after, ready to blend into salsa roja

I wanted to use up a bunch of stray summer ingredients like bell peppers and cherry tomatoes by cooking them into a savory pot of black beans. This was eaten one night; the next day, there were more beans leftover and still more tomatoes to use up. Fortunately, salsa roja, or roasted tomato salsa, doesn’t take labor-intensive steps to make at all. You don’t even need to chop these tomatoes; you can just plop them on a pan and stick it under the broiler for 10-15 minutes to get blackened. Then you don’t even need to peel them, although you can, before transferring them to a blender or food processor. I was encouraged by Pati Jinich’s sensibility about this in her recipe for salsa roja in Pati’s Mexican Table. She doesn’t always peel the tomatoes, adding that the blackened specks will add character to the salsa. I love this lady. (Listen to Pati chat with me on Eat Your Words.) 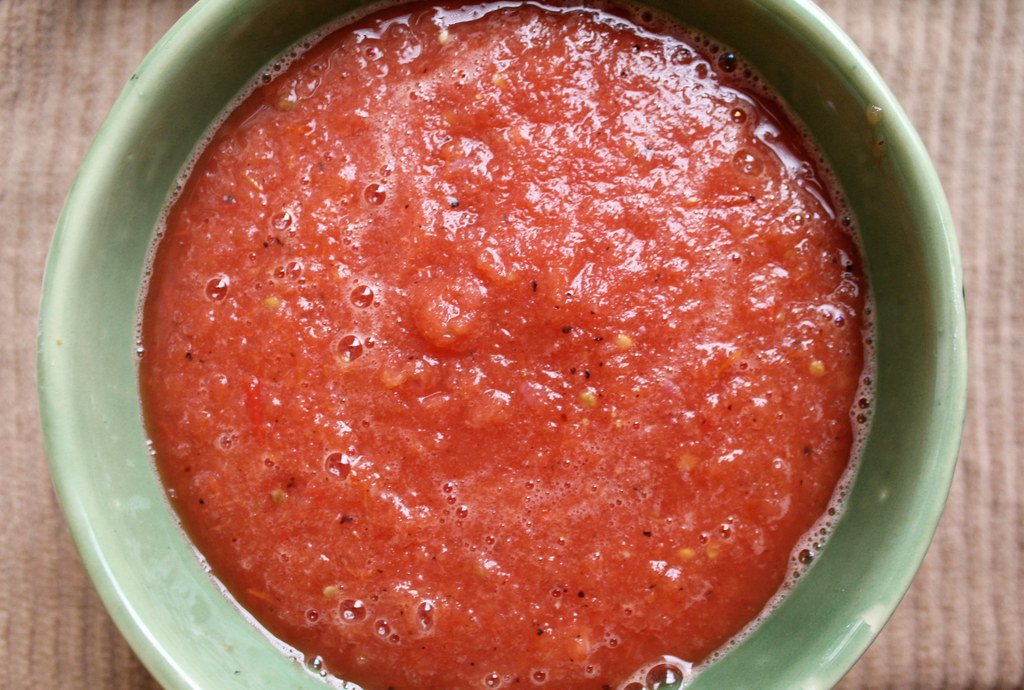 the resulting salsa, blackened skins and all

I followed her simple recipe from the book for salsa roja, only skipping the serrano or jalapeno chili that she calls for roasting along with the tomatoes, onion slice and garlic cloves. I’d recently pickled a bunch of jalapeno slices in an apple cider brine, so I figured I’d pull these out for garnish in the eventual dish instead. 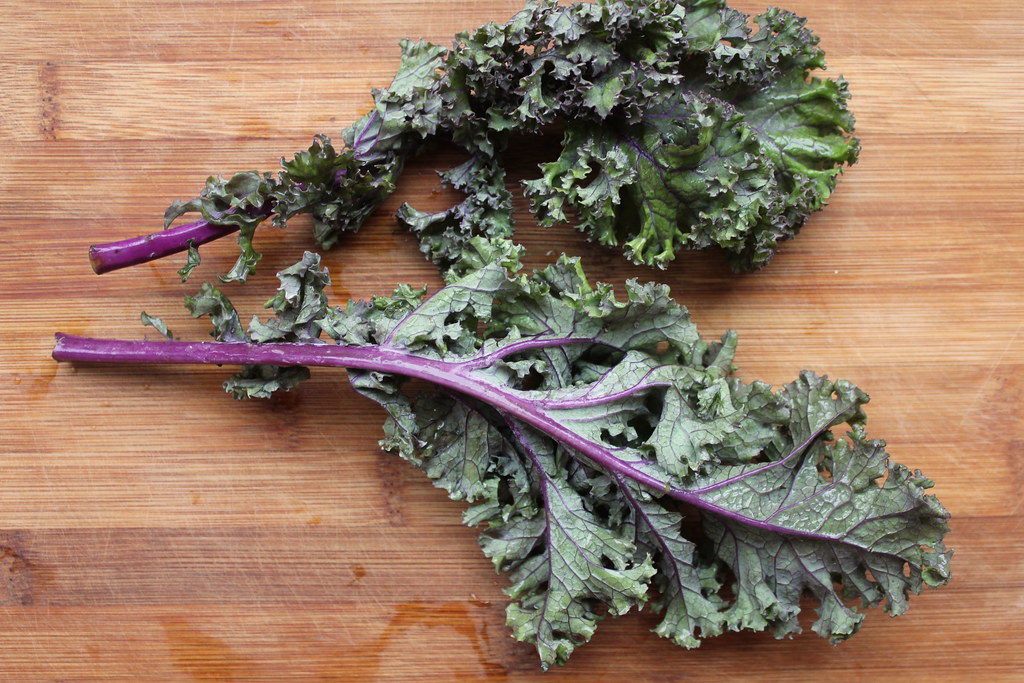 kale is crushed raw into a garlicky salsa verde with lime


But there was also some kale to spare. Rather than make a sautee or braise with the leafy greens, or roast them into a chip-like texture (I’d entertained making “chilaquiles” with kale chips rather than tortilla, before realizing that the frizzled kale would just get limp again soaked in the sauce), I treated them like I would a fresh herb instead. I made a very basic fresh herb-based salsa verde, only without herbs like parsley or cilantro, but freshly chopped kale. No, it’s not quite as vibrant as a classic herbal version might taste, so I squeezed plenty of fresh lime juice into the slurry to enliven it a bit. It worked, but be sure to use your kale “salsa verde” very soon after adding lime juice, as the citric acid will quickly oxidize and darken the color of the bright, green kale. 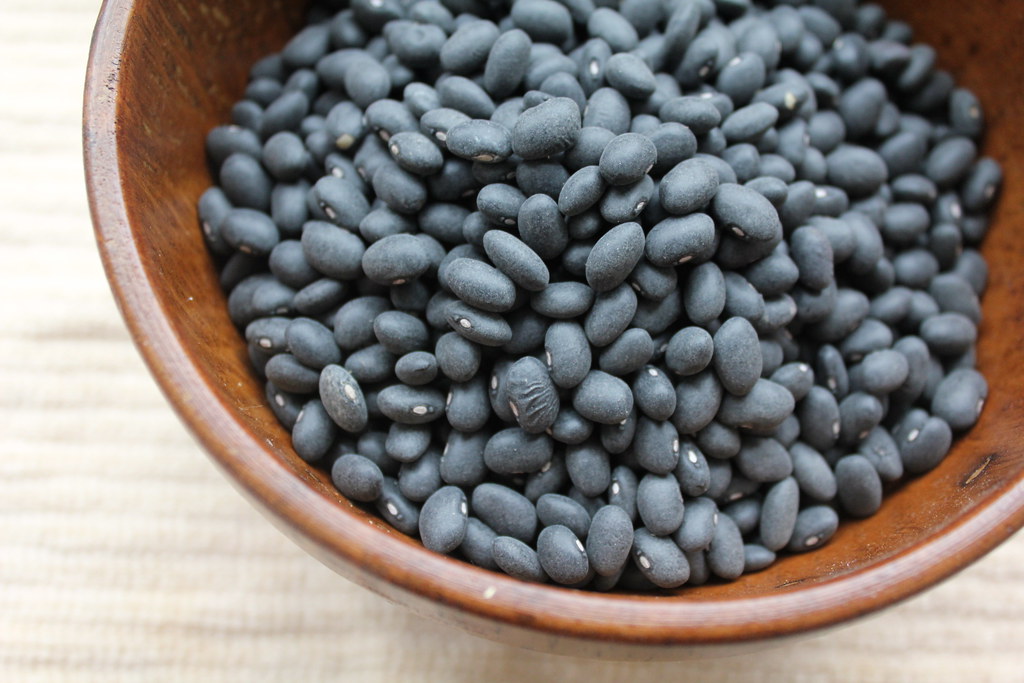 So it was a tale of two salsas: red and green. Somewhat traditional, and non-. What better way to enliven a bowl of leftover black bean sludge than with drizzles of these two sauces, like a Jackson Pollock painting? Still, there was one more color I was craving: yellow-orange, from a runny egg’s yolk. 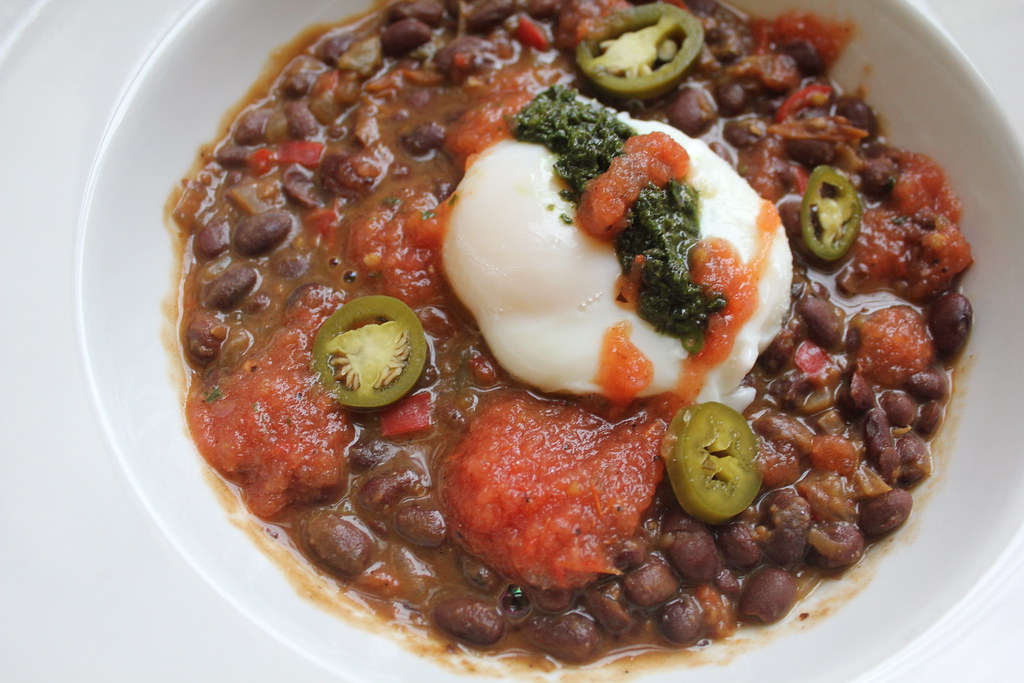 A poached egg plopped on top of this dish gave it that aesthetic panache as well as a gooey richness that I suppose you could otherwise achieve with some melted cheese. But I skipped the queso this time, not wanting to cluster the scene. A breakfast-worthy bowl of leftovers that works well for a light lunch or dinner, this improvised dish really satisfied. Now I have leftover, roasty salsa roja to play around with next.

Heat the 1 tablespoon olive oil in a medium-sized pot and add the chopped onion and bell pepper. Season with a generous pinch of salt and cook over low heat, stirring occasionally, for about 8 minutes or until well softened. Add the garlic and cook another minute. Add the drained beans and about 1 cup of water and bring to a boil. Reduce heat to a simmer and cook uncovered, stirring occasionally, for 10-15 minutes. Season with salt and pepper to taste.

Meanwhile, place the tomatoes, slice of onion, and 1 whole, unpeeled garlic clove on a baking sheet. Place under the broiler and cook for 10-15 minutes, or until the tomatoes’ skins are blackened and the tomatoes feel soft. Remove from the broiler and let cool several minutes. Peel the garlic clove and transfer the tomatoes, onion and garlic to a blender or food processor. Blend for several seconds until completely smooth. Season with salt and pepper to taste. Transfer to a bowl and set aside.

Mince the remaining clove of garlic. Combine the kale leaves and minced garlic in a food processor and pulse for several seconds, stopping to scrape down the sides. Once finely chopped, slowly pour in the 1/4 cup olive oil while blending until thoroughly incorporated. Add salt and pepper to taste. Transfer to a bowl and set aside. Stir in the lime juice when you’re almost ready to serve the dish (to prevent too much oxidation of the leaves due to the acidity).

Heat a large pot of water with at least 6 inches of water until just beginning to boil. Add the vinegar to the water. Reduce heat to retain a near-boil. Crack the eggs into separate bowls. Carefully slip each egg into the water one at a time, being careful to keep them away from one another in the water. Cover the pot for 2 minutes. Peek inside and try to lift and separate each egg with a slotted spoon. If the eggs still appear very runny, with translucent white parts, let poach a little longer. Once the whites appear just opaque, lift them one at a time from the water with a slotted spoon.

Plate the black beans in individual bowls and place each poached egg on top. Drizzle each plate with the sauces and serve immediately.

Four brownie points: Not only is it not heavy, greasy, or cheesy, but it’s a pretty well-balanced meal. You’ve got carbs as well as heart-healthy proteins from a base of black beans (and if using dried and cooked beans, without the sodium that comes from canned beans). There’s more protein and some not-as-heart-healthy fats from the egg yolk, used minimally in comparison to the beans. Then there’s leafy green vitamins like Vitamin K from the densely crushed-up kale, and Vitamin C from the fresh lime and lots of fresh tomatoes. There’s no starch to speak of, but you’ll likely be pretty full.

Six maple leaves: Why buy bottled salsas when you can make a much fresher, zingier version at home with just 15 minutes, a broiler and a blender? The from-scratch sauces might sound like a lot of work, but they’re a great way to use up extra ingredients that are in season (and you can freeze or can them for later use). Get as many fresh tomatoes that are still in season locally as you can, and enjoy them even when they’re not.