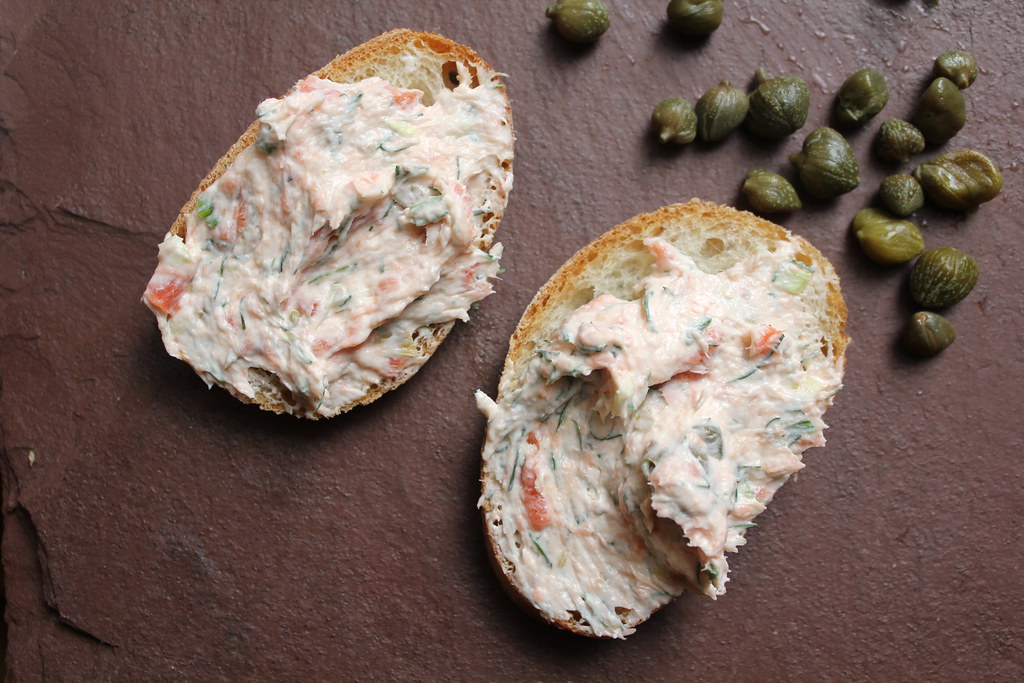 Ruby-red smoked salmon is luscious alone on a good piece of crusty bread—or, if you’re a New Yorker, on a bagel. But a schmear of cream cheese along with it, too, adds richness that gives its strong flavor legs. For a smoked salmon (or lox) dip with cream cheese, I tried to incorporate aspects of my current environment, while nodding to traditions. It turned out that I had—favorably, and rather by chance—just the ingredients to make a total classic rather than some aberration or experiment. That was good thing; some classics are just meant to be.

Laena went to Greece recently, and brought back capers. They were the most enormous capers I’ve ever seen, and the “best” ones she got, according to the locals, were clasped tightly in a plastic bag. I had some dill on hand, after doing something with new potatoes. Those and some big scallions, waiting to be used. But the most imperative contribution to this cocktail-party side was a great slab of salmon, caught by my friends Christopher and Emily in Bristol Bay, Alaska. This sockeye fishery has just enjoyed its annual season, and I was lucky enough to capture some of their catch, once again, in Brooklyn. 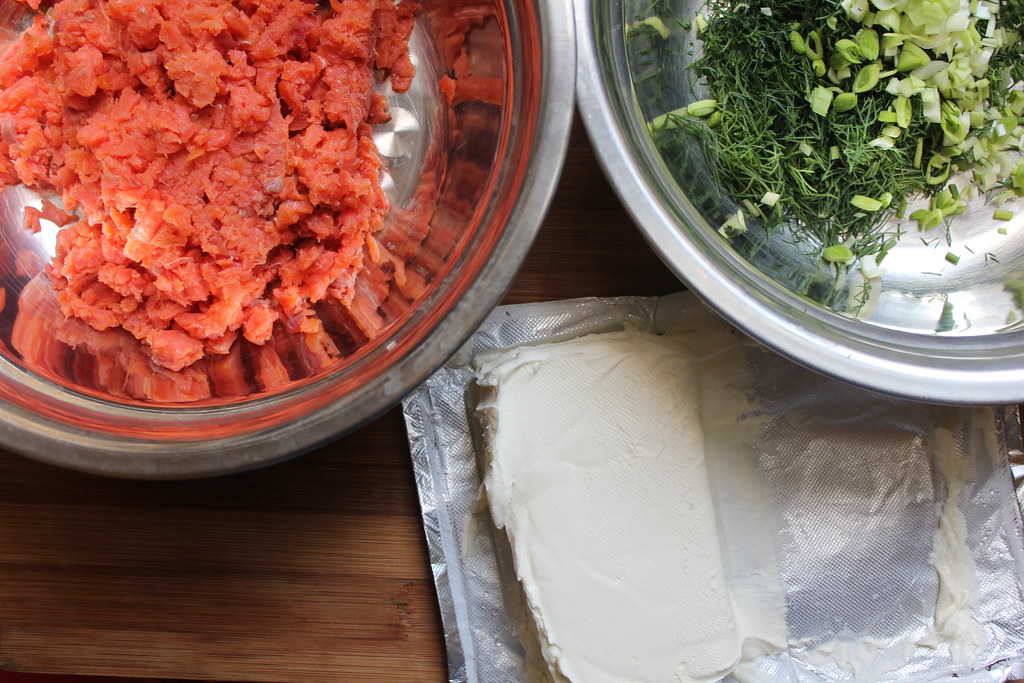 I’ve been scarce to say too much about my red salmon dealer these years, but it goes by Iliamna Fish Co., a salmon CSA run by the two. If you sign up for their mailing list, it is a clutch move. Wild Alaskan salmon is so desirable as far as fish go that its fishing must be tightly regulated, as exploitation and overfishing may rock its gentle balancing act with man’s appetite. Not “may,” it has. As Paul Greenberg in Four Fish could attest to, its declining wild stocks have led to most salmon sold in the US being farm-raised. Wild salmon now commands a much higher price point, and its catch is limited. As Christopher and Emily have shared in their fishing notes from over the summers, it is wildly irregular and susceptible to chance. The first fish they catch of the season, for tradition, they kiss and throw back in the waters, “to tell his friends that we’re actually pretty decent people.” They caught enough of them this year to share plenty around with CSA members. 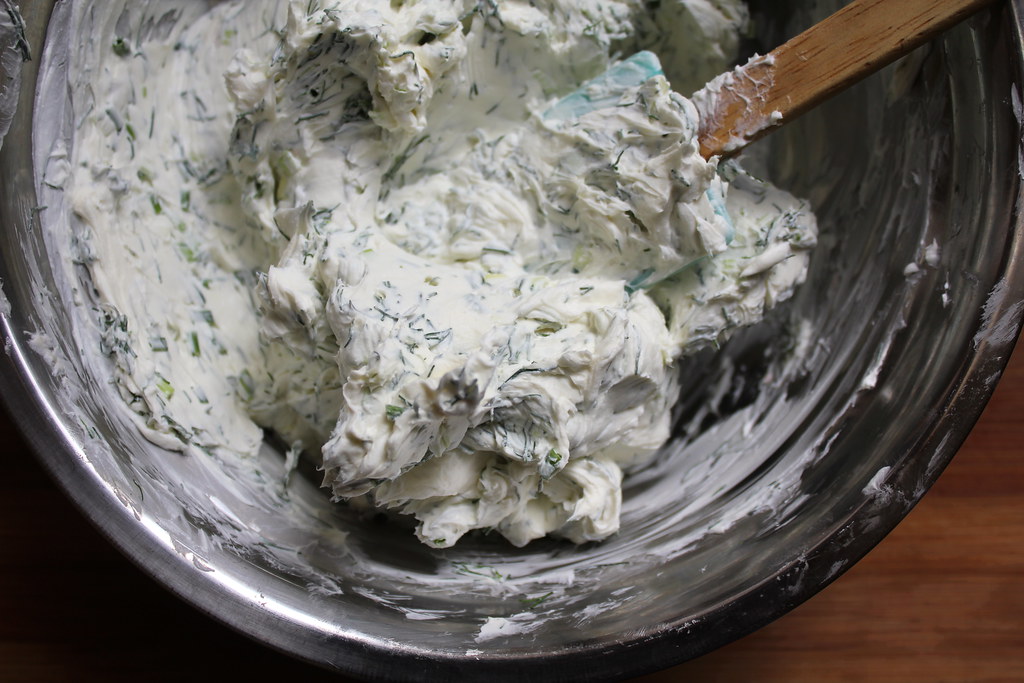 So then, I bought some cream cheese. Because the salmon’s arrival in Brooklyn deserved a truly locally-accented celebration. I guess the same goes for those Greek capers, schlepped in luggage through JFK. I thought about all the ways I could combine these cool ingredients beforehand. Really I did, and hope to soon. But most immediately, I had to go to a couple weekend parties, and wanted to stretch that salmon as far as it could go. 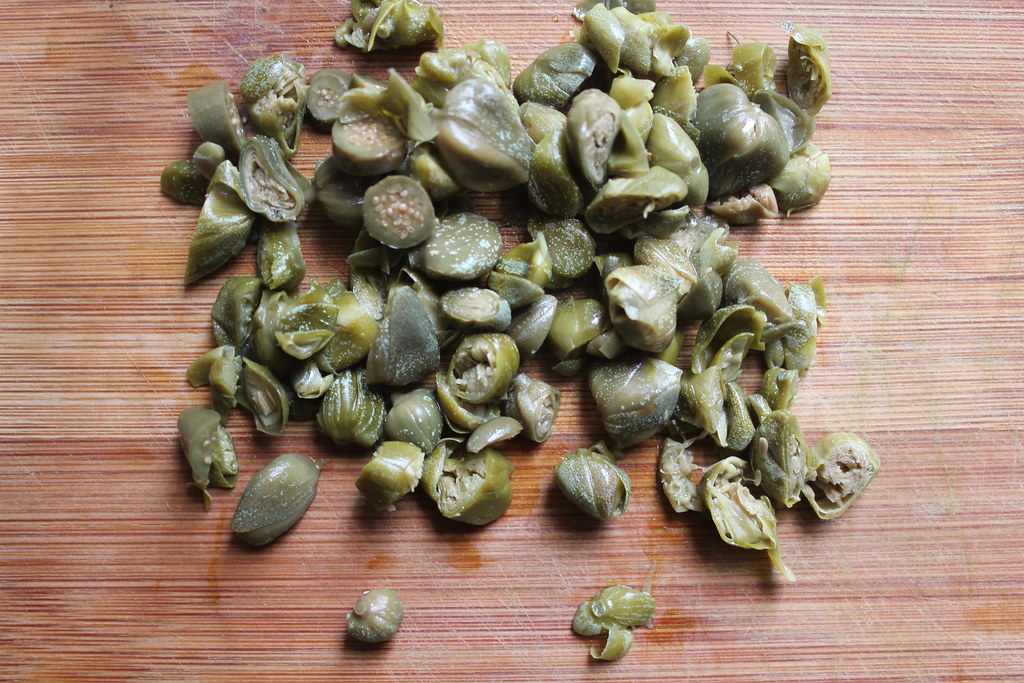 Rather than processing the smoked fish in a paste-y, pink spread, I went for a chunky mixture, which was augmented by the bits of capers and scallions. Pulling fresh dill fronds from its stem is so much easier to do than with other, leafier herbs. Once you’ve got a pile of feathery stuff on your board, you can just run a big knife over it a couple times for a coarse chop. A tiny bit of squeezed lemon juice made the spread much more spread-able, and brightened its flavor as well. I think the chopped capers’ brine added to this, no doubt especially due to their great size. Chopping a caper cleanly gave me splice-diagram insight into the thing, so full of seeds—like a miniature passion fruit, almost. It was a sight I don’t remember ever having seen or realized about capers before. 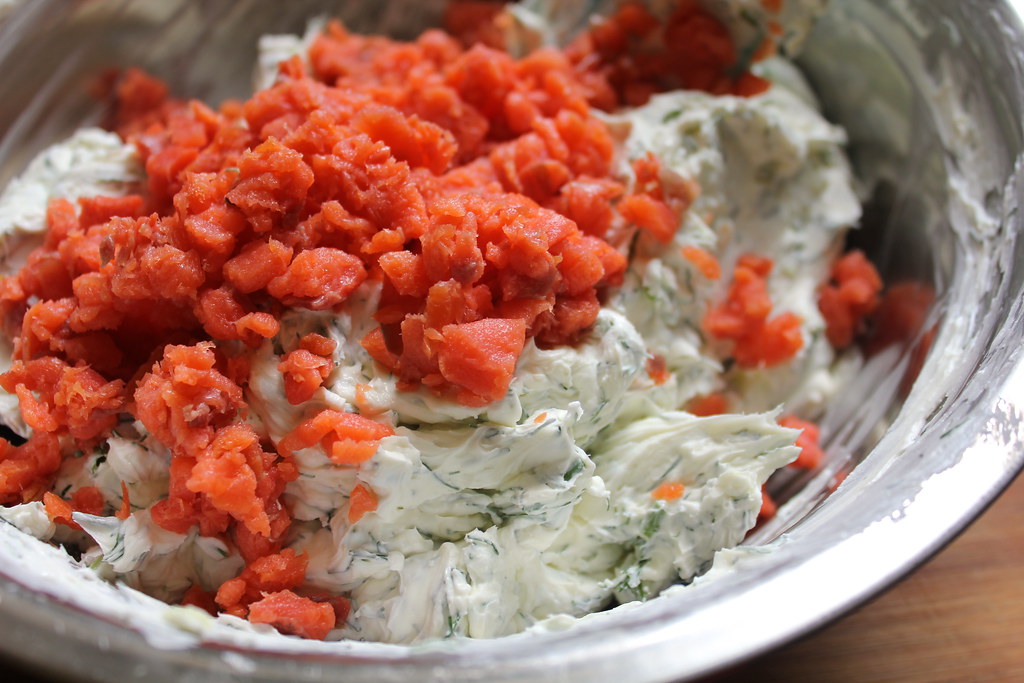 Mincing smoked salmon is easy work, but it requires many rounds and bouts with a knife or cleaver. But, you can make it chunkier than any steak tartare you’ve ever tried, or as fine as ground hamburger. Invariably, some pieces will be more like one or the other. You won’t have a pastel pink product in the end, but you should make sure to have the taste of salmon liberally throughout. Taste and go from there. This dip can improve in flavor over time, as that flavor permeates throughout the fat.

Rich and creamy dips and spreads are not always for me; but when persistent traditions beckon with the best ingredients you have on hand, it would seem so silly not to indulge.

Combine the chopped herbs with the cream cheese in a large bowl and gently fold in with a soft spatula. Fold in the salmon until distributed fairly evenly. Fold in the capers, followed by the lemon juice. Taste for seasoning, and add salt and pepper if desired (or not).

Seven brownie points: This is a rich, creamy, heavy spread meant for nibbling and snacking, not eating a lot. Thanks to the salmon, however, you will get your nutritious fish fatty acids, omega-3s, which may help reduce the risk of heart disease.

[Green Factor 5] Five maple leaves: Wild-caught salmon is considered a “best choice” fish for sustainability, particularly those in the Pacific Northwest. We are far from that coast in New York, however, which is why it’s even pricier for us on the East Coast. Since it’s an indulgence, not an everyday food, I’m happy to have it once in a while. You can also make a gorgeous spread following the same type of recipe using locally-caught smoked bluefish or trout, easily found on the East Coast.