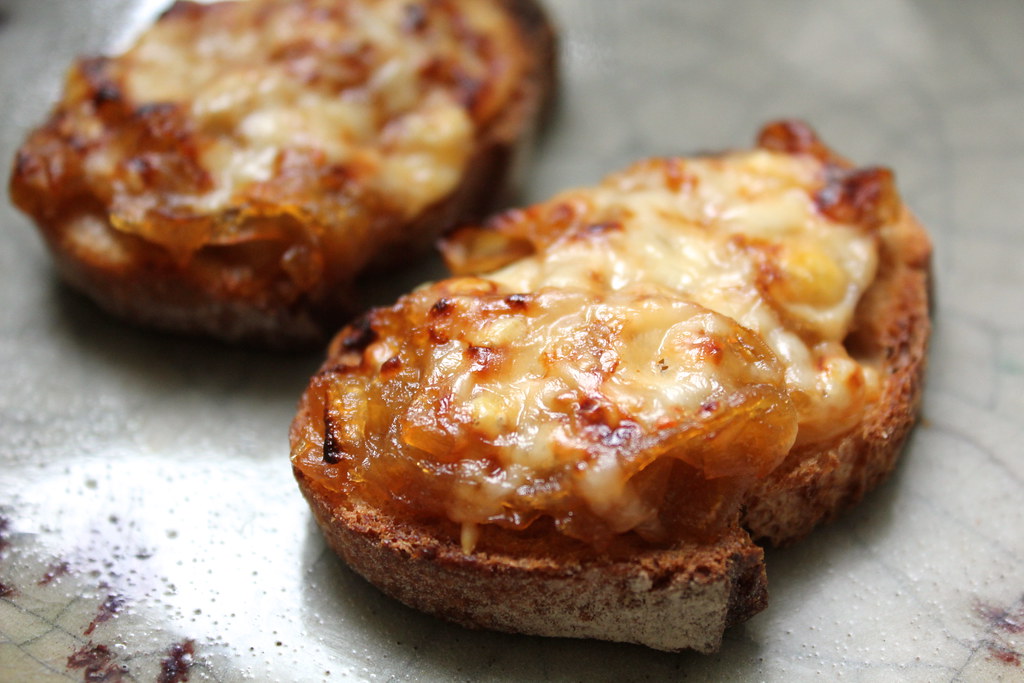 A friend told me he’d made French onion soup recently. I got jealous. That warm, salty broth topped with molten cheese sounded like the perfect remedy for a lazy night in the freezing cold. But I had a potluck to go to, and little time to whip up a batch of hearty beef stock. Plus, I wasn’t sure how I’d be able to bring twenty-some individual oven-safe bowls to the party, but I knew that my friends would love this classic combo.


So I turned it into crostini. Not the most original creation, probably, but a satisfying rendition. I made sure to get the crustiest, tastiest bread I could find (sourdough levain baguette, hor hor hor!), and to caramelize the onions until they were meltingly soft. Pain de l’oignon? Au gratin? Qu’est-ce que c’est? Whatever you want to call it, they were some tasty bites.

You don’t even need to make a soup for this snack. I’m not sure I ever really liked the spongey, soaked bread in the bottom of French onion soup bowls besides. When I’m having soup, I want more soup than bread. When I’m having bread, I’d prefer it to be crispy and toasted. So we’re having bread here, instead of soup (that can wait for another cold, lazy night). Even stale bread, leftover from a half-used baguette will work great here. Crostini is traditionally made from less-than-fresh bread, which is toasted to mask the imperfection of texture. I let some sliced bread sit about an hour before topping them, which allowed the pieces to dry up a little — enough to prevent the onion topping from soaking right through the middle immediately. 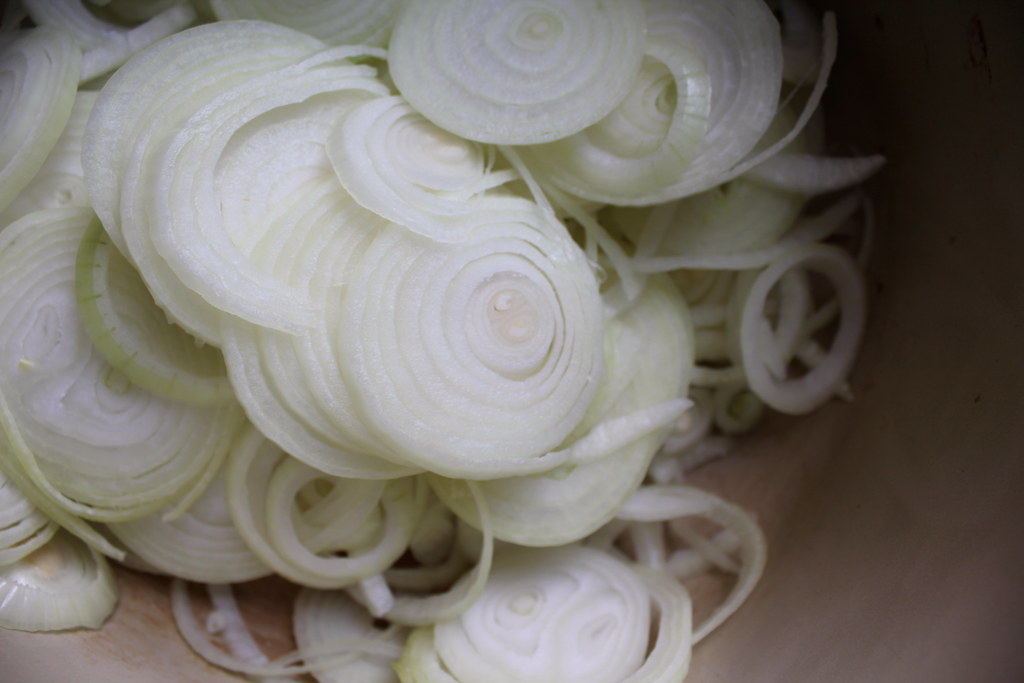 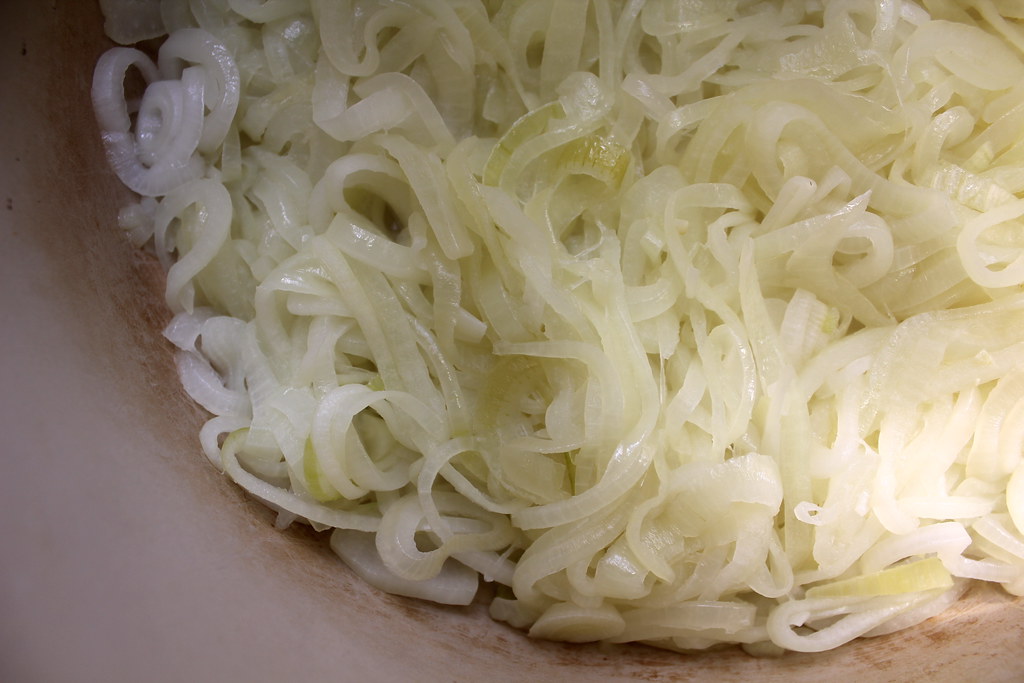 Cook more onions than you would imagine. Invest those three dollars or so in a bag of them — it’s not like there’s hoards of flashier produce at the winter farmers’ market anyway. Prepare to spend at least an hour or more letting the onions gently cook, stirring occasionally, until golden-brown and candy-sweet, but never burned in parts. The thinner you slice the onions, the sooner this will happen, so try to slice them evenly and as thinly as possible, keeping the rings intact (wearing goggles optional). A deeply developed, oniony flavor doesn’t just happen on the spot. 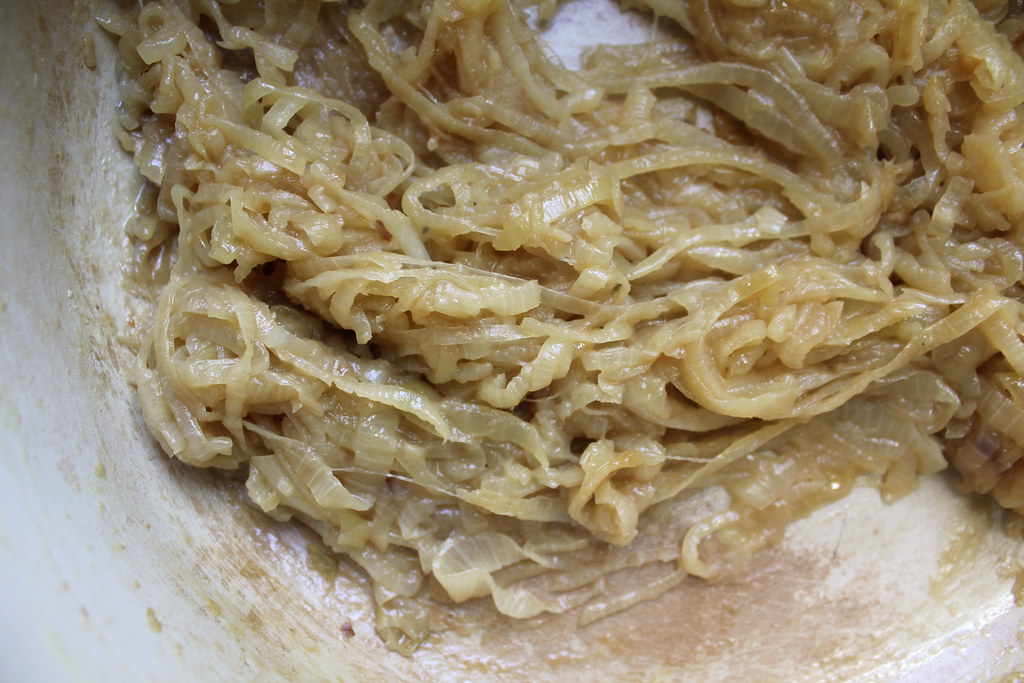 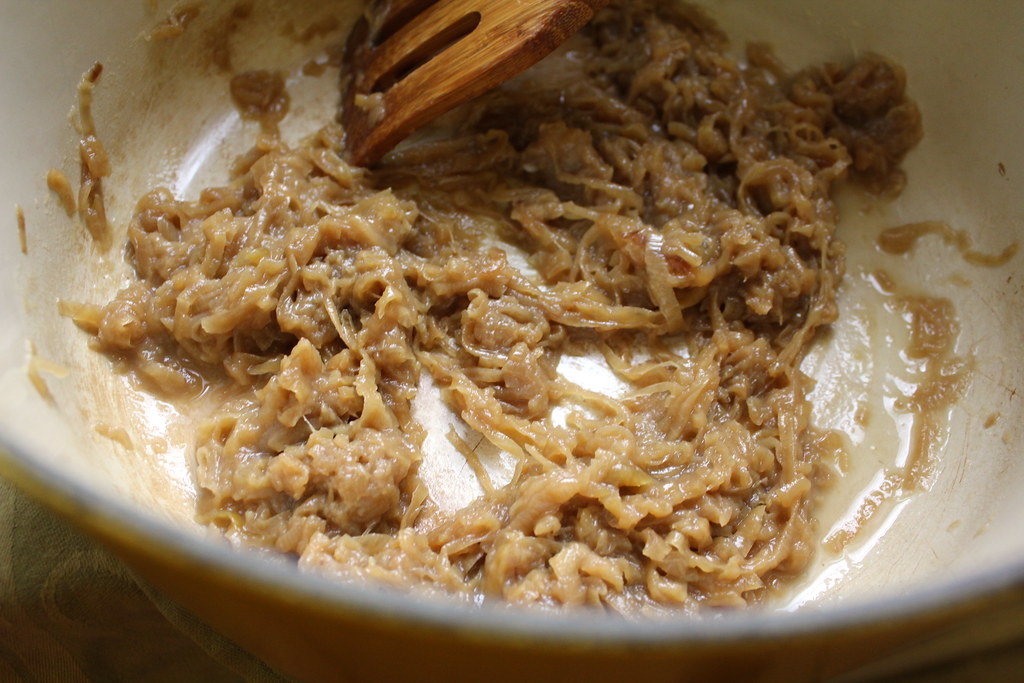 their color deepens with long, slow and low heat

I took my onions, sliced bread, and grated cheese in separate containers to the party, where I quickly assembled them on sheet pans and popped them into the oven. There’s nothing like a just-baked party favor. (The few that were left out were like cold pizza by the night’s end.) I do wonder what the French would do with leftover leftovers such as old crostini. Perhaps then, the really spent bread and its toppings might be perfect for sinking into the bottom of a bowl of soup.

Melt the butter over medium-low heat in a large, heavy-bottomed pot or Dutch oven. Add the onions along with a couple pinches of salt. Let cook, stirring occasionally, until mostly translucent, about 8 minutes. Reduce heat to its lowest setting. Cook for at least 1 hour, stirring occasionally and checking to ensure that there’s no burning on the bottom of the pan. Once onions have turned a rich, golden-brown color, add the white wine. Increase heat to medium and cook 5-10 minutes, stirring and scraping the bottom of the pan. Add the water or stock and continue to cook another 5-10 minutes, or until the onions have a glossy, thick sauce-like consistency. Season with salt and pepper to taste. (Onion mixture may be cooled and refrigerated for up to 2 days before use.)

Preheat oven to 400 degrees. Arrange the bread slices on sheetpans in a single layer. Spread a spoonful of the onion mixture on each slice. Top each slice with a small handful of the grated cheese. Bake for about 10 minutes, or until the cheese is just golden-brown on top. Transfer to serving plates and serve immediately.

Seven brownie points: There’s nothing terribly healthful about this recipe — you’ve got bread, cheese, and onions. But that’s why it’s a savory snack. No need to gorge on an entire bowl heaped with melted cheese this time around when you can get your cravings satisfied in a smaller portion.

Six maple leaves: I was attracted to French onion soup because it made good use of the sparse ingredients from the farmers’ market. Sure enough, butter, cheese, bread and onions can be found year-round and even in the coldest depths of winter. You can even swap Gruyere for something similar from a small, artisan producer in your area instead of opting for the imported classic. With so many American-made cheeses to choose from, this will make for a unique rendition that’s sure to be just as tasty.