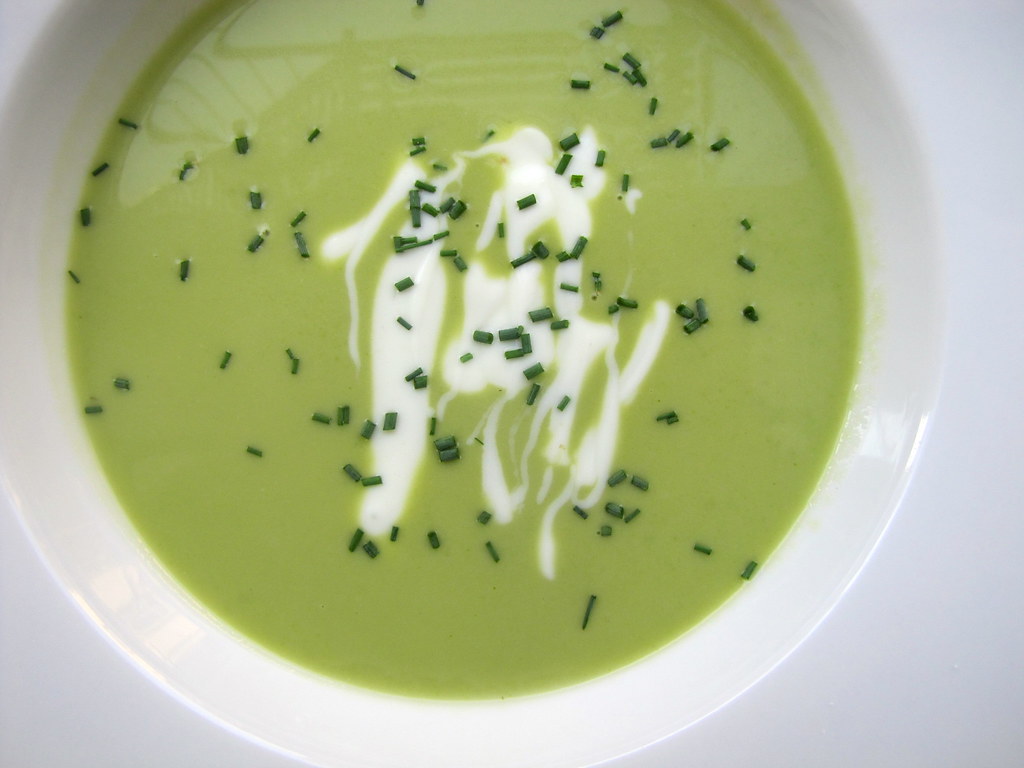 It’s too hot to eat hot soup, but cold soups might benefit from a certain sort of heat. That’s what I figured when I set out to make a smooth, creamy puree of shelled English peas. Chilled soup is a great fix for a hot summer day–light and refreshing yet satisfyingly tasty. Then I recalled the taste of another favorite application for peas: those crunchy, wasabi-glazed snacks.

I probably should have splurged on a bag of them to crush up and float on top of this bowl to reel in that riff. But instead, I mixed up a similarly cool, velvety-smooth wasabi-flavored cream to drizzle on. It enhanced the bowl while introducing a new way to appreciate that wasabi and pea combo. 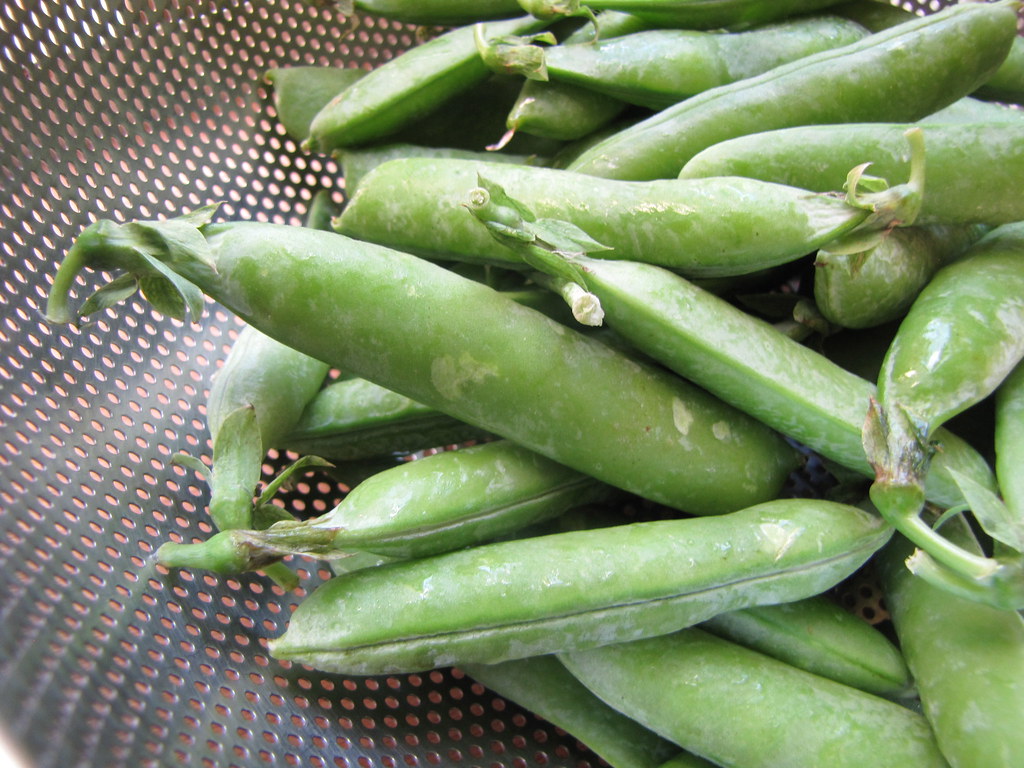 English peas in the pod


It feels like the dog days of summer already–around New York, it’s been ninety degrees for days straight. But according to the calendar, we’re only in its third week. That’s why spring peas are still around, ready to shell and enjoy fresh. It might seem like a lot of work to snap English pea pods and scoop out their peas when you can just dump out a bag of them frozen. I kind of enjoy this task, though, and the peas’ delicate texture and prime flavor is rewarding. Good enough to showcase in the starring role of a soup, rather than push to the side of a plate. 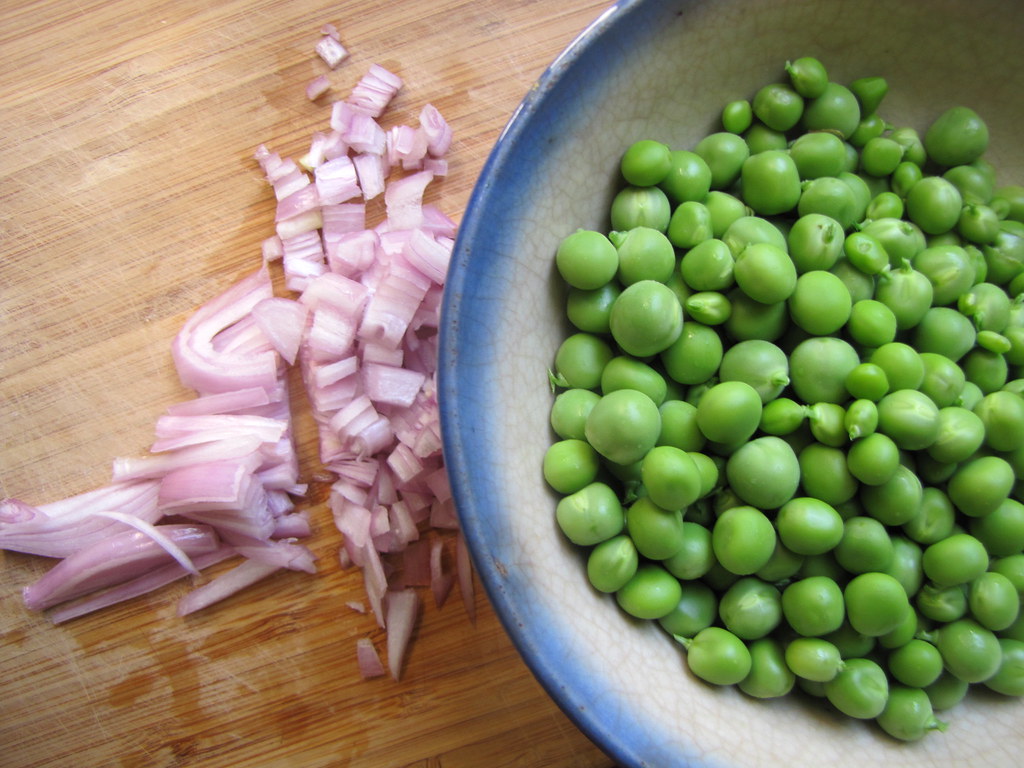 shelled and ready to cook with chopped shallots


My chilled pea soup recipe is pretty straightforward: sweat shallots and garlic, add stock, peas, and puree. You’ll want to let the peas get a good soak in this lightly simmering broth before blending, or else the peas won’t be soft enough to become really smooth. Also, the flavors meld and intensify given time, just like with any soup. This one’s especially good for chilling overnight to enjoy the next day–you won’t even have to heat it up. This alone is such a refreshing contrast to split pea soup, that murky, winter comfort made from cracked (or “split”) dried green peas. You could add a touch of fresh mint or dill here and just call it a day. And actually, I did just that the same day as making the soup, before putting the rest of it away to refrigerate. Then, at some point during the hot, restless night, the idea of making a wasabi cream came to me, and I awoke recharged and ready to reinvent it with this in mind. Apparently soups are not the only thing that improves overnight. 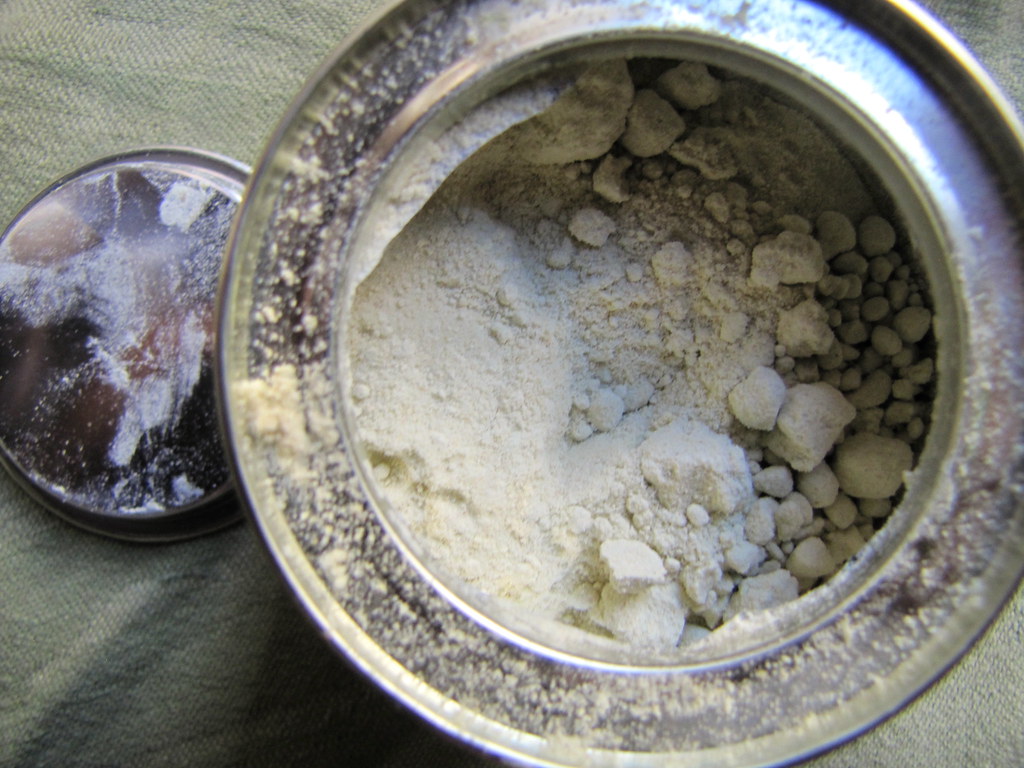 
I recommend getting a tin of ground wasabi powder for all your wasabi-eating needs. Wasabi paste or “prepared” wasabi, the stuff that you’ll see on your sushi platter, is only just that and water. Or else, a few additives and vinegar if it’s purchased already prepared in a tube. The powder you can mix into mayonnaise and season dishes with without adding superfluous liquid, and a smaller bit goes a longer way. You could also get fresh wasabi if you’re near a bonafide Japanese grocery, which resembles fresh horseradish root–but this is expensive, won’t last as long in your pantry, and won’t dissolve into a cream when grated. 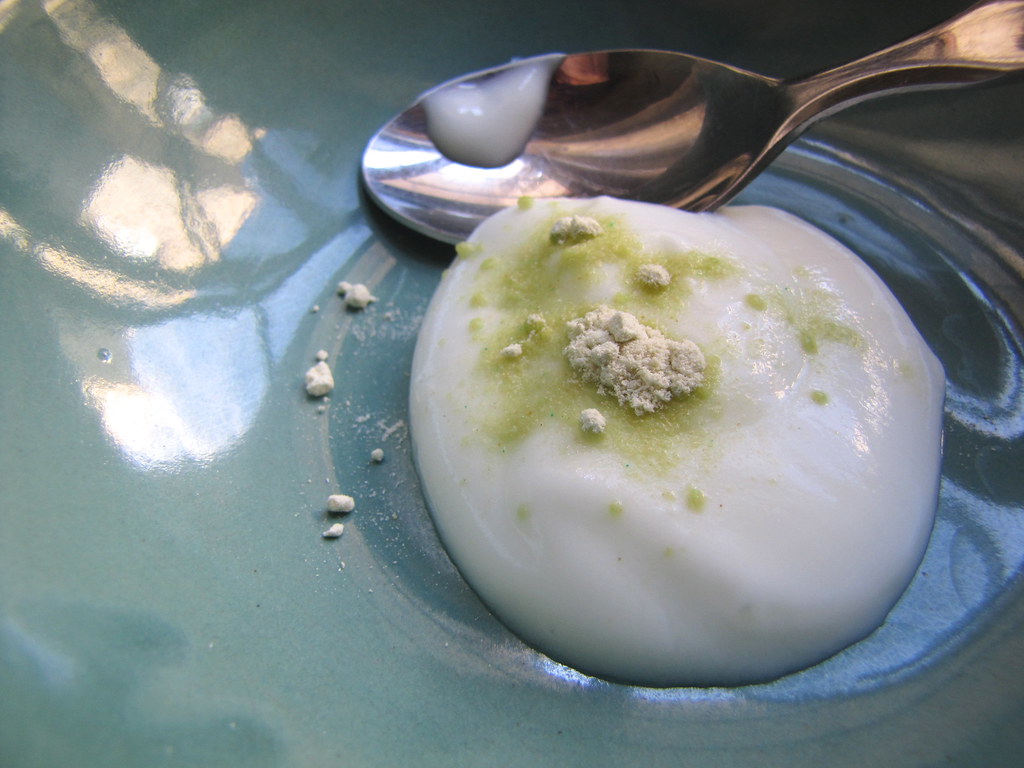 a pinch of wasabi quickly flavors yogurt or sour cream

As for that “cream,” I opted for something that would lend a cool, dairy contrast and also a bit of tang: yogurt. You could also use sour cream or creme fraiche for more richness and similar flavor, but plain yogurt’s a lighter option, and it’s also in my fridge all the time. (I stir in maple syrup or honey to it if I want it to be sweet.) Skim or whole milk, Greek or Indian, as long as it’s plain yogurt, it’ll do the trick fine. The powder will begin to dissolve immediately upon meeting a liquid host, leeching its–well, “pea”–green color. You would never see wasabi yogurt anywhere in the world, and that’s part of why mixing these two things up is so fun.

Whether you stir in this topping or reserve it for just a few spoonfuls, its subtly spicy presence helps take the chill off this light, summer soup.

Heat the oil in a medium-sized pot or Dutch oven. Add the onions, a generous pinch of salt, and cook over low heat. Stir occasionally and reduce heat if onions are starting to brown. Once softened and translucent, about 6-8 minutes, add the minced garlic and cook, stirring, another 1-2 minutes. Add the stock and bring to a boil. Add the peas. Reduce heat to a low simmer and cook 20-30 minutes. Let cool slightly and transfer to a blender or food processor. Alternately, use an immersion blender. Blend thoroughly until soup is smooth. Taste for seasoning, adding salt and pepper. Let cool to room temperature, place into an airtight container and chill until cool (can be done overnight).

Make the wasabi cream: Sprinkle the wasabi powder into a bowl of the yogurt or sour cream and wait a few moments for it to soak. Stir until thoroughly incorporated, and season with a pinch of salt to taste.

Ladle the chilled soup into individual bowls. Drizzle or drop a dollop of the wasabi cream in the center, and serve.

Four brownie points: I’m giving this one ultra-healthy rating, especially rare for an appetizer or soup course. The dollop of wasabi yogurt notwithstanding, this soup gets its slightly thick and creamy texture from green peas–which are great sources of fiber, protein, Vitamin K and antioxidants. It’s a side dish of peas, essentially. If you opt for lowfat yogurt, you’ll get some probiotic bacteria to aid your digestion, which is more common (and commonly labeled) in store-bought yogurt than sour cream.

Eight maple leaves: This seasonal soup is inspired by the moment’s bounty of locally-grown shell peas; it’s a moment that won’t last too long in the year. I don’t recall ever seeing peas in their pods at conventional grocery stores either, so if you do want fresh ones, the most convenient way to get them might be supporting local farmers at their stands and markets or growing your own. It’s worth it, promise!