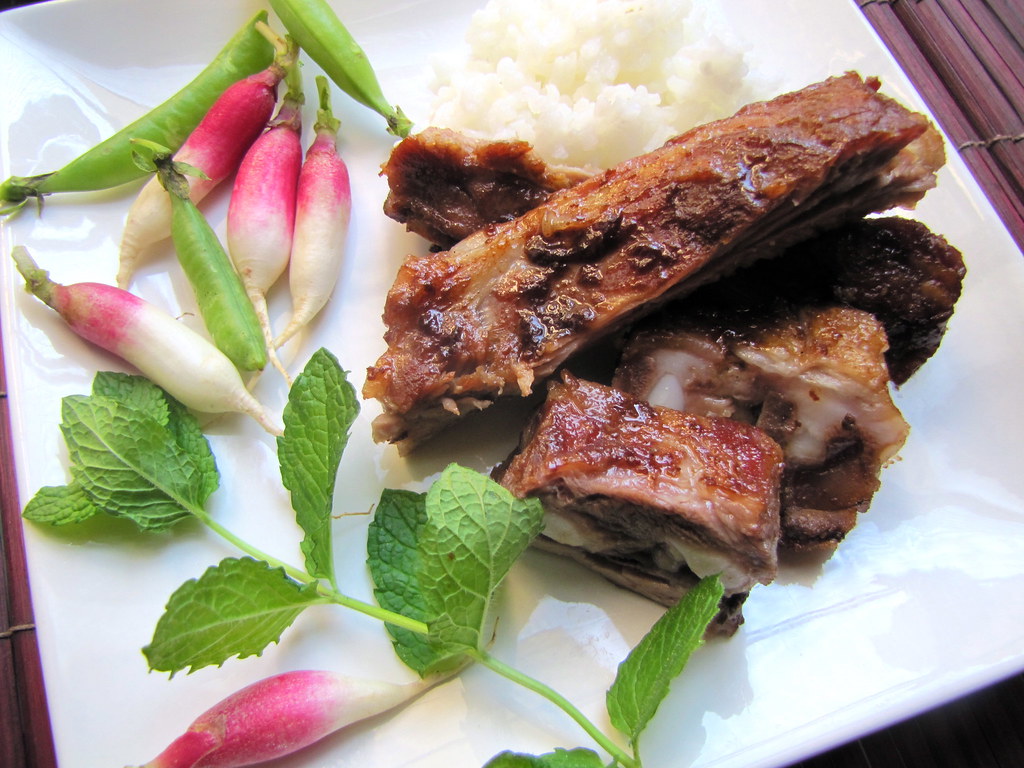 Merriam-Webster Dictionary defines “spare” in several ways: “to refrain from attacking or reprimanding with necessary or salutary severity,” in one; “to relieve of the necessity of doing or undergoing something <spare yourself the trouble>” as another; or “to use or dispense frugally — used chiefly in the negative <don’t spare the syrup>” as yet one more. Yet it’s the second category of the sixth definition for the word that I think “spare ribs” are most akin to, that it’s “to have left over or as margin <time to spare>”. Have leftover, marginally, in my freezer, is what I did have with regards to spare ribs the other day. And so I used them up (as per definition 6a). But this was actually because these ribs were cast away from a previous cooking mission, involving pork belly, much like as in definition 3.


This is because spare ribs are commonly “spared” from the cut of pork known as the belly, whose richness is so enveloping that its layers are duly used for smoking as bacon, or braising until flopping sags of hong shao rou. I will now spare you from more “spare” rhetoric (definition 3, or possibly 2), to say that these were some excellent mid-summer eatins’, and that you should spare no hesitation to make them this coming Fourth of July holiday (alright, just one more!).

Like many people with some Chinese-American heritage (or rather, confused people with 50/50 like myself), I grew up experiencing spare ribs as a common dim sum snack — this tender, bony, chewy, gooey, totally-besotted-in-its-own-braising-liquids-stuff. Then when I experienced ribs of any kind from a Western perspective, they were always crispy on the outside, reddened from its rub or marinade inside, and smoky-tasting. What the hell? Why don’t we take the best parts of both takes, I thought, and make a spare rib dish to satisfy all the senses. It would spare me the trouble of even having to think that hard about it (okay, I lied). 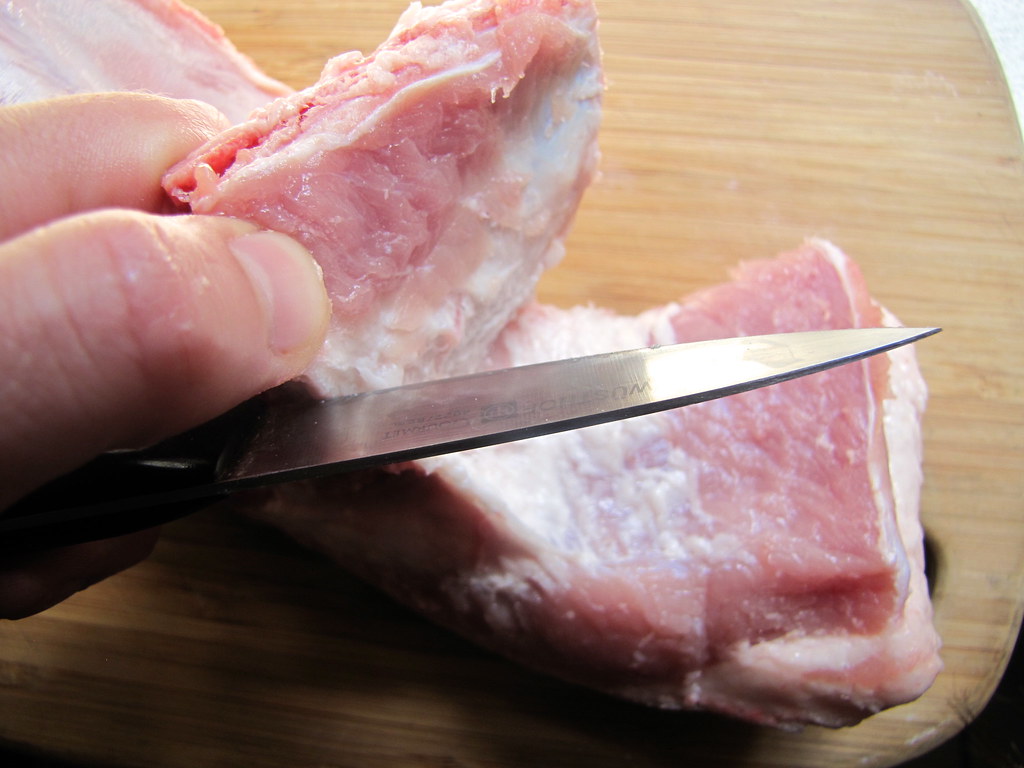 sparing the ribs from a piece of pork belly


The technique is simple but it does require careful timing. I let this small strip of spare ribs sit in a wet marinade of dark soy sauce, sake, and a pinch of sugar overnight. Using dark soy sauce will produce a more reddish cast on the meat, as well as some more flavor. If you don’t have this but only light soy (the most commonly found variety in any grocery store), then just use a bit more of it to make up. The sake will help balance that saltiness, and give the ribs more liquid to bathe in. The sugar adds that touch of sweetness so dominantly found in American barbecue sauces. Finally, there were a couple cloves of garlic, grated directly into this mixture to make just a little bit go a long way. Also, minced garlic would either need to be rubbed off the meat before cooking or else burn, but the grated paste would not quite, while becoming brown and somewhat smoky-tasting in the end. 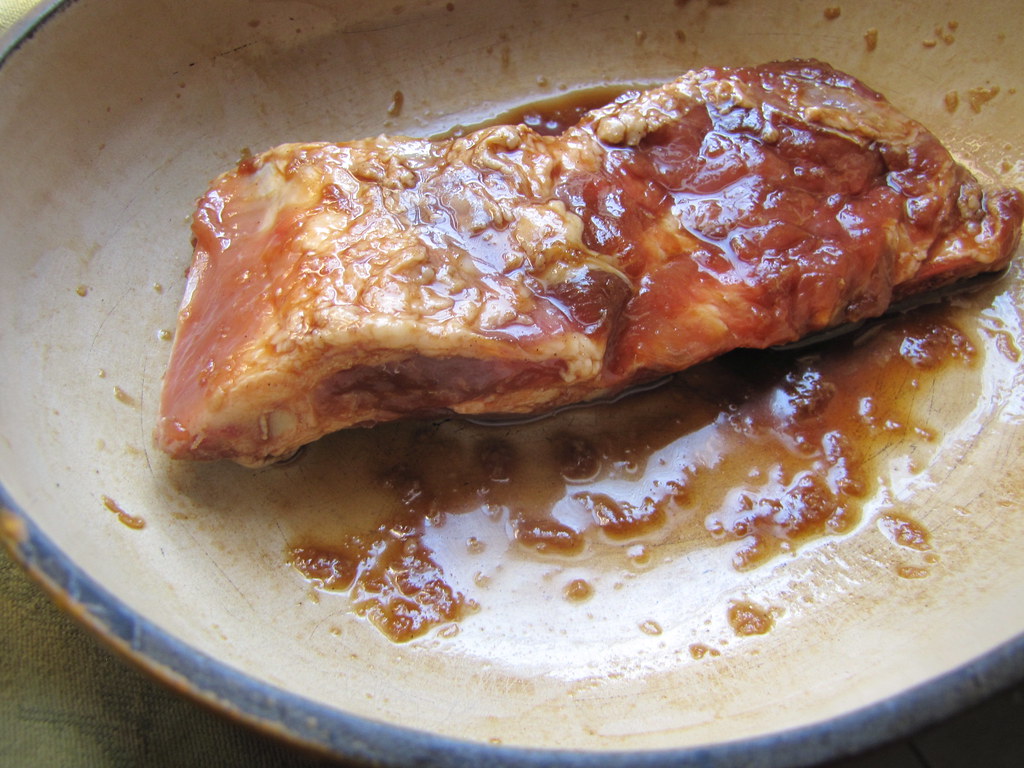 Next, the spare ribs are simply roasted at a very low heat, covered, for just about an hour for this smallish portion. Over-cooking will drain out the liquids until they singe in the pan (better check on them at 45 minutes), while undercooking will result in toughness. But if you get the timing right, checking along the way, the meat will be meltingly tender and juicy, thanks to being sealed in its own steam. Yet the surface will still have that brownish, crackly crust; you should flip the ribs once during cooking, or else sear one side in a pan right after it’s out. 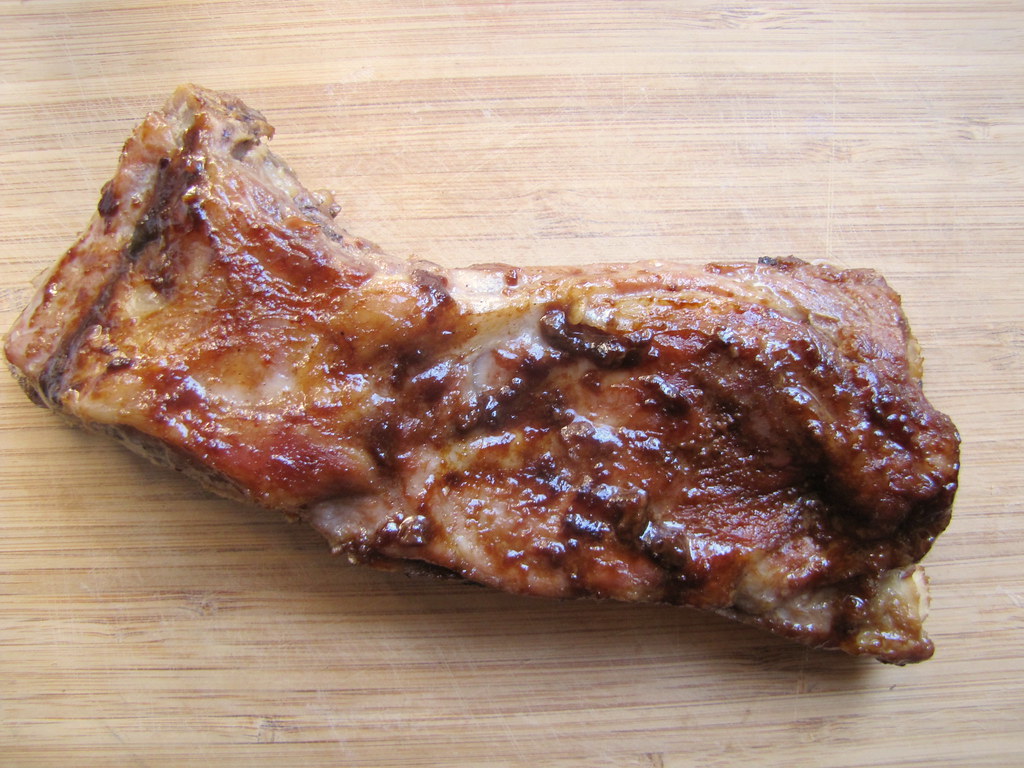 the finished ribs, ready for slicing


Then it’s time to gorge. For such a flavorful, unctuous cut of meat, I served mine with plain rice and some fresh veggies on the side — it’s summer, after all. The pan drippings can be turned into a quick sauce with the help of hot water and some stirring, to pour over the ribs, or the rice. It was so good that I’m thinking of bringing these, just cooked and cooled down, to barbecues soon. It’ll heat up nicely on a grill — even though, as I’ve found, you can really spare yourself from grilling if you want to make good ribs at home.

Rub the spareribs with the salt, pepper, sugar, garlic, soy sauce and sake. Cover and chill overnight, or up to 2 days in the refrigerator.

Preheat oven to 300 degrees. Place ribs with its marinade in an oven-safe casserole with a lid or else cover tightly with foil. Cook for 40 minutes, then check on the ribs and flip them over. Cook another 15-20 minutes or until the pan is mostly dry but not too burnt (add a splash of water at the 40 minutes point if it’s looking very dry). Remove and let cool a few moments. Cut the ribs by following the bones, and serve.

Eight brownie points: Ribs have a pretty high fat to meat ratio, which accounts for all that flavor. Truth be told, you don’t even need to add much seasoning to them at all. The marinade here helps to color and moisten the meat, while not overpowering its flavor too much, and when you’re indulging in such a high-cholesterol main course, it’s best to round it out with really fresh, minimally dressed or seasoned foods to make a meal.

Four maple leaves: Animal protein is never the most low carbon-footprint food option, but this could go different ways. It can be difficult to find spareribs in conventional grocery stores, so it’s a good time to go to a specialty butcher shop or farmers market to source this cut. There, you might have more options to choose from with regards to the sustainability of the meat–how humanely was it raised, and from what farm? This would be good to know, and choose wisely from, because conventional or “white pork” is raised in a most inhumane manner (cramped in unhealthy confinement farms), whereas free-range animals are not only a much more conscientious choice, but are bound to taste much better.