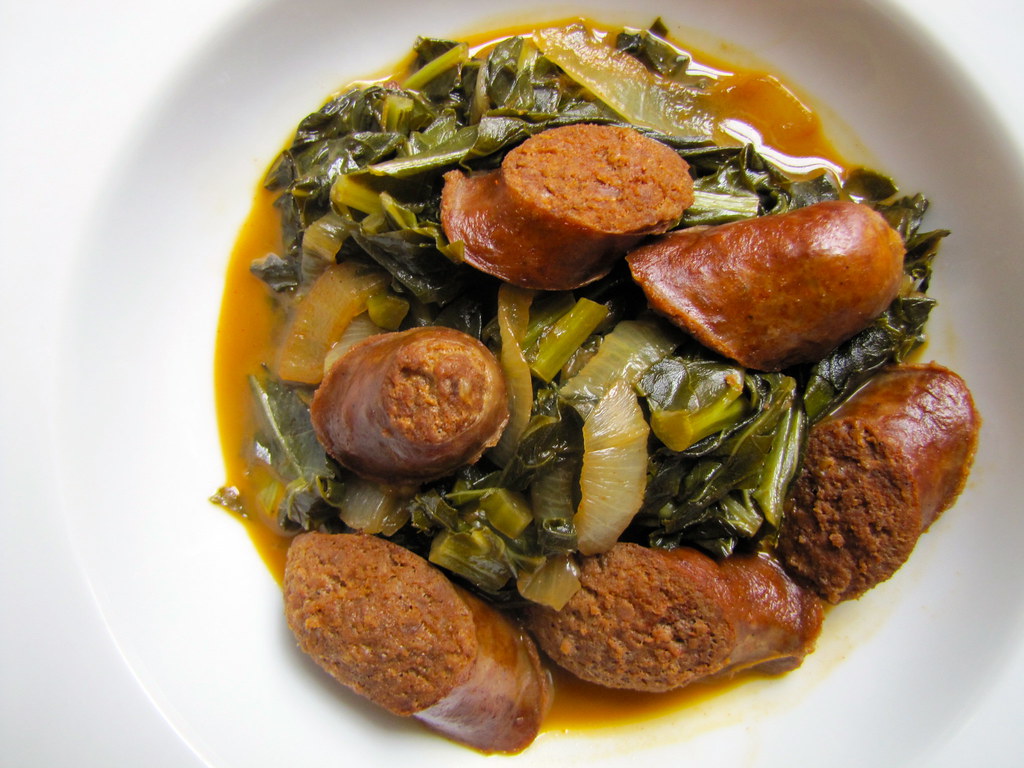 I had a spectacular tapas dish a long while back, of chorizo braised with cava, a Spanish sparkling wine. The key ingredient was really garlic — loads of it — which, in combination with the spicy sausage links enveloped the whole room with its pungent aroma. I don’t have cava around today, but I’ve noted that many similar tapas make use of Spanish hard cider (or sidra), another common effervescent alcoholic beverage. So I brought the whole thing home by using a sparkling, golden pilsner beer, commonly found in my refrigerator this summer, to braise chorizo with instead.


By that point, I wasn’t holding to authenticity. So I figured, why not add some greens to soak up this delicious broth as well? Some types of greens really need to be braised, as long as they’re not cut in infancy a la “mesclun” or “baby” greens. Mustard greens, turnip greens, kale and collard greens are surely in this category. Well, I had a bunch of collard greens from my CSA, and they weren’t going to taste terribly awesome on their own. 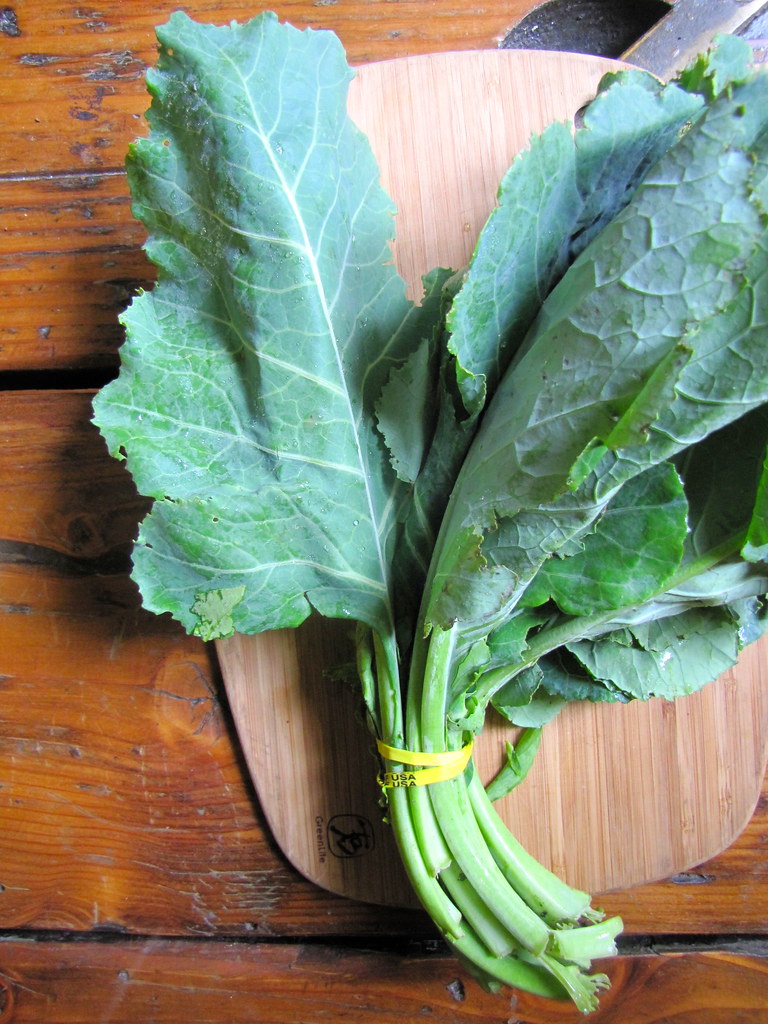 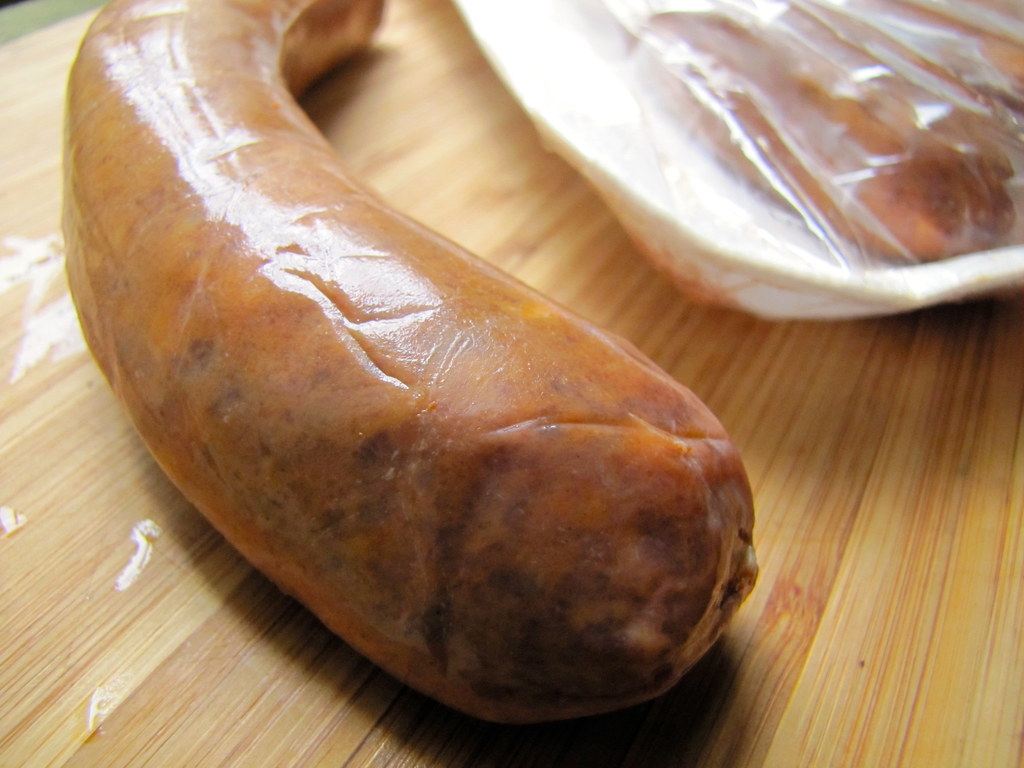 Another way that this dish is more locally fashioned is the way the sausages were produced. I didn’t get true Spanish chorizo straight from Catalonia, which is a dry-cured sausage not too dissimilar in style from salami, or Cantonese lap cheong. I didn’t even get Mexican chorizo, which is easy to find in New York City. I got chorizo from a small farm that sells at the Greenmarket here, which shares the heavy spicings of garlic and paprika as in Spanish chorizo, but is a fresh sausage, not cured. That accounts for its softer texture and the fact that it can’t be strung as cool garlands in a butcher shop. But even though it isn’t salt-preserved, it still shares the same purpose of any sausage, which is to repurpose bits and scraps of cuts of meat (usually pork), in a seasoned tube. And farms — no matter their size — have much of that, so I’m not surprised to see so many ethnic flavors, like chorizo or Italian sweet sausage, from the local meat farms at the Greenmarket (these were from Vermont’s Tamarack Hollow Farms, Union Square Wednesdays, in case you were wondering). 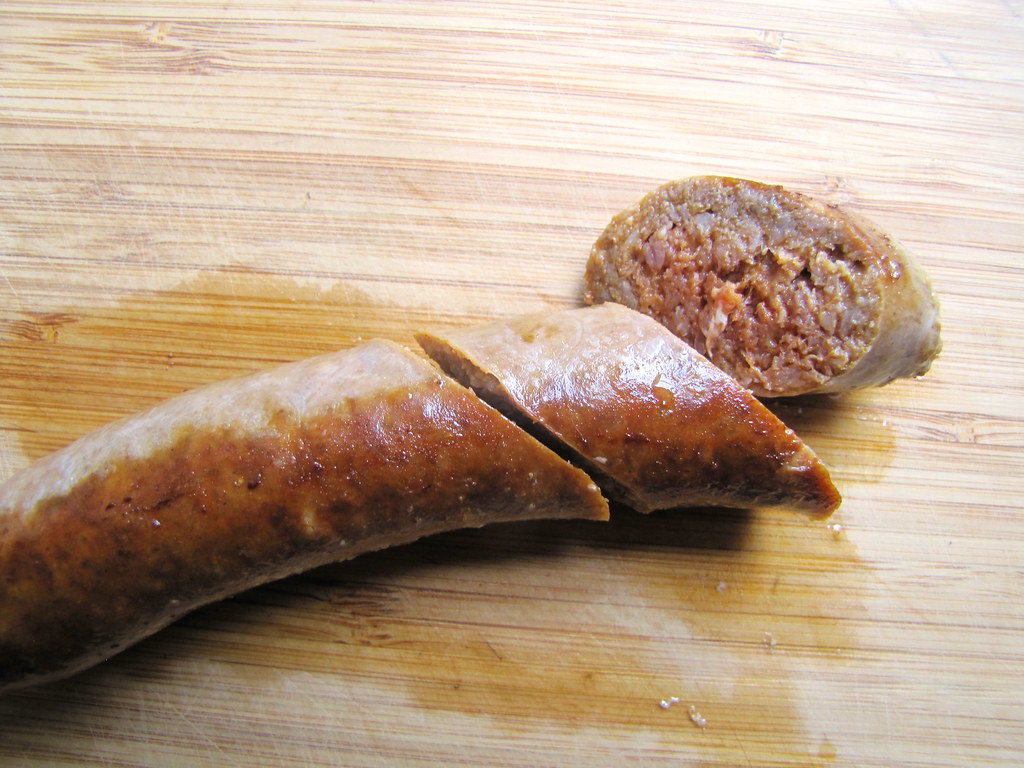 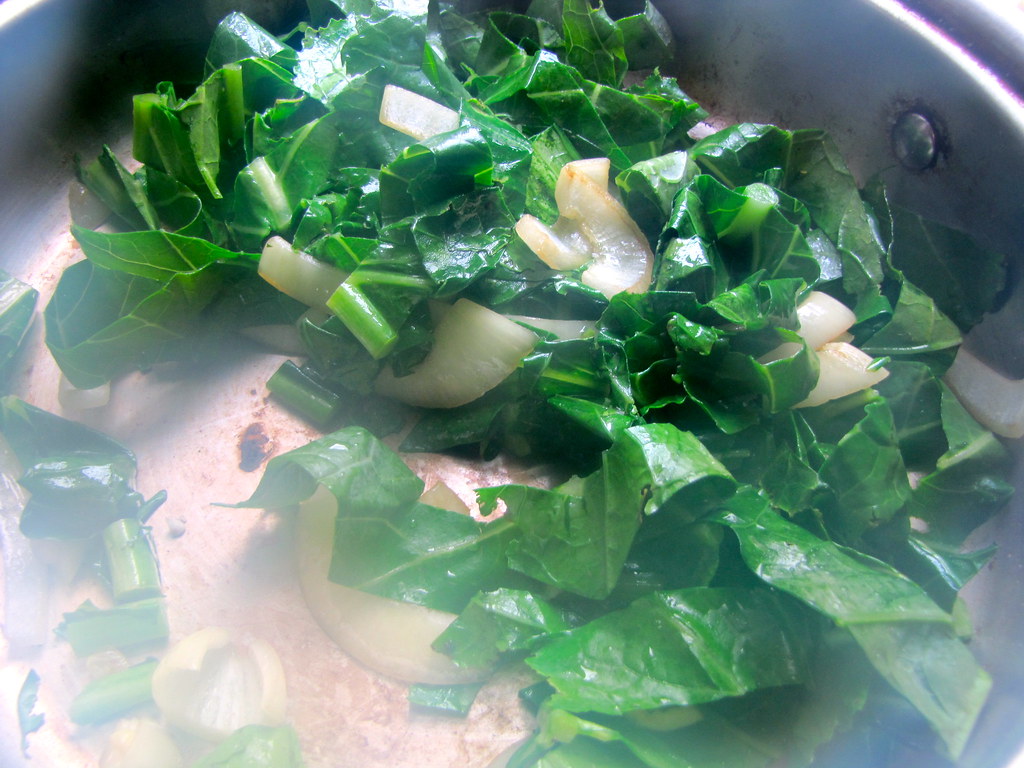 You can certainly use dry-cured, authentic Spanish sausage here, though. Its firm texture softens nicely after the braising, while still holdings its shape. To mimic this and avoid having bits and pieces of ground meat floating around in the dish, I browned my (fresh) chorizo first in the pan, alone. After it was almost cooked through and cooled, it was cut to bite-size pieces. In the meantime, the sliced onions, garlic and collard greens went down in the hot pan streaked with its residue, along with a touch more olive oil. These were softened in due time to chop the chorizo and return it to the pan, along with a bottle of beer to deglaze and bring to a boil. 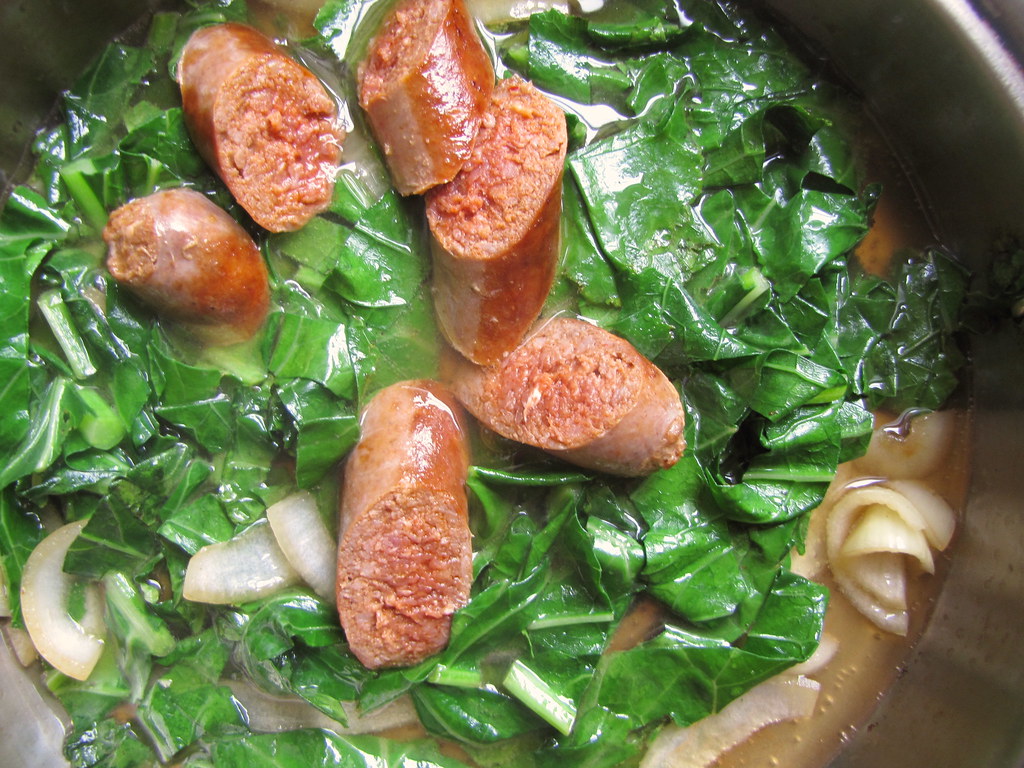 I added a hefty pinch of smoked paprika to this braise to reinforce that smoky, dried paprika taste from the chorizo’s classic seasonings. I let the liquid cook down to just a small pool that would be perfect for sopping up with crusty bread. Serve this dish with rice, potatoes, or any type of cooked grains you like instead. I liked the slight sweetness the collard greens imparted on the heavy sausage, and the bitterness from the beer. This dish might be strange, global mashup more so than tapas-styled, thanks to the different varieties of sausage, greens, and braising liquid. You could just as easily follow the same idea with kielbasa and red cabbage, Italian sausage and broccoli rabe, or collard greens with ham hocks or bacon instead of sausage. Hearty meats and serious greens are a natural complement in many more ways than just this.

Heat 1-2 tablespoons olive oil in a heavy-bottomed chef’s pan, Dutch oven, or saute pan with a lid over medium-high heat. Place down the sausages and let brown on the bottoms for 2-3 minutes. Flip and brown the opposite side, reducing heat to medium or medium-low, for another 2-3 minutes. Transfer sausages to a cutting board.

Add another tablespoon of oil to the pan and toss in the onions. Let cook, seasoning with a pinch of salt and stirring occasionally, until just beginning to soften and brown a bit on the edges. Toss in the garlic and chopped collard greens, along with another couple pinches of salt. Cook, stirring, until the collard greens are completely wilted.

Once cooled for a few minutes, slice the chorizo into bite-size pieces (about 1 inch). Return them to the pan, and increase the heat to high. Pour in the beer along with the smoked paprika. Stir and bring to a boil. Reduce to a simmer and cover pan. Let cook 30 minutes, or until the liquid has reduced to a very small pool. Taste for seasoning. Serve with crusty bread, potatoes or grains.

Six brownie points: No matter how you slice it, sausage is not a health food, for its richness of animal fats. But this makes it incredibly flavorful, and helps flavor healthy foods, like dense collard greens. Using just a small bit for flavor and substance goes a long way. Eating a whole bunch of collard greens, rich as it is in antioxidants, fiber and especially Vitamin K, also goes a long way for your nutrition.

Eight maple leaves: Consuming animal meat already has points against it for inherent higher toll on the environment, but supporting small farms who are going against the grain of industrially-produced meat is a worthy cause. Sausage also keeps well in the freezer, and is often made as a byproduct of more delicate cuts of meat.