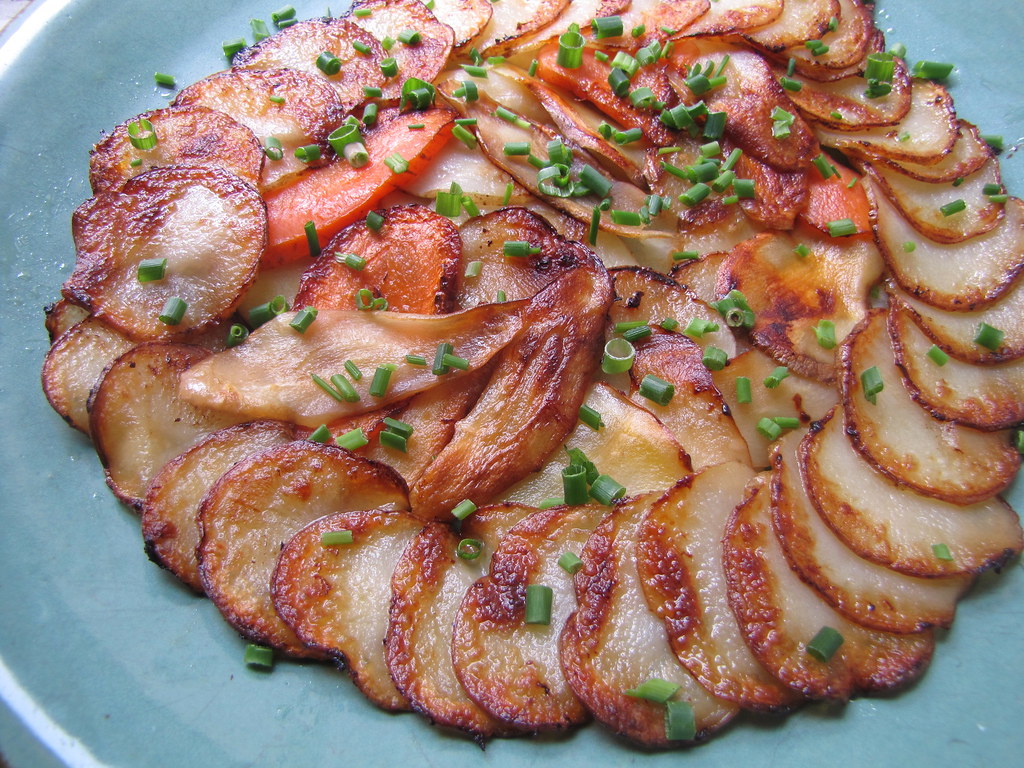 Is there anything more heavenly when breakfast time calls than potatoes cooked crispy in butter? Yes, I can think of something — when those potatoes mingle with the sweet flavors of root vegetables, also cooked crispy, in butter. There are simpler ways to combine these forces, as in a golden hash or a roasted tray of assorted chunks. I’ve slipped root vegetables ranging from parsnips and sweet potatoes to rutabagas and sunchokes into platters of these for many breakfasts past. But for a slightly more dressy display of this variety, I’ve layered thin slices into a pan-cooked galette.


I’ve made it sound easy but there are a few pointers in order to make this galette stay intact. Potatoes are for structure; the root vegetables are for flavor. (That, and butter.) The thing wouldn’t really hold together if it were composed entirely of roots. What is a galette, this thing, by the way? By definition, it is a loosely formed, or “rustic” cake or tart, usually round and composed a great deal by hand rather than sophisticated devices. The way I’ve conceived of this savory version might also deem it an upside-down potato (and root vegetable) cake, made in a simple pan without any additional starches or binding agents. It sounds fancy, but it is rooted in humble tradition, essentially. 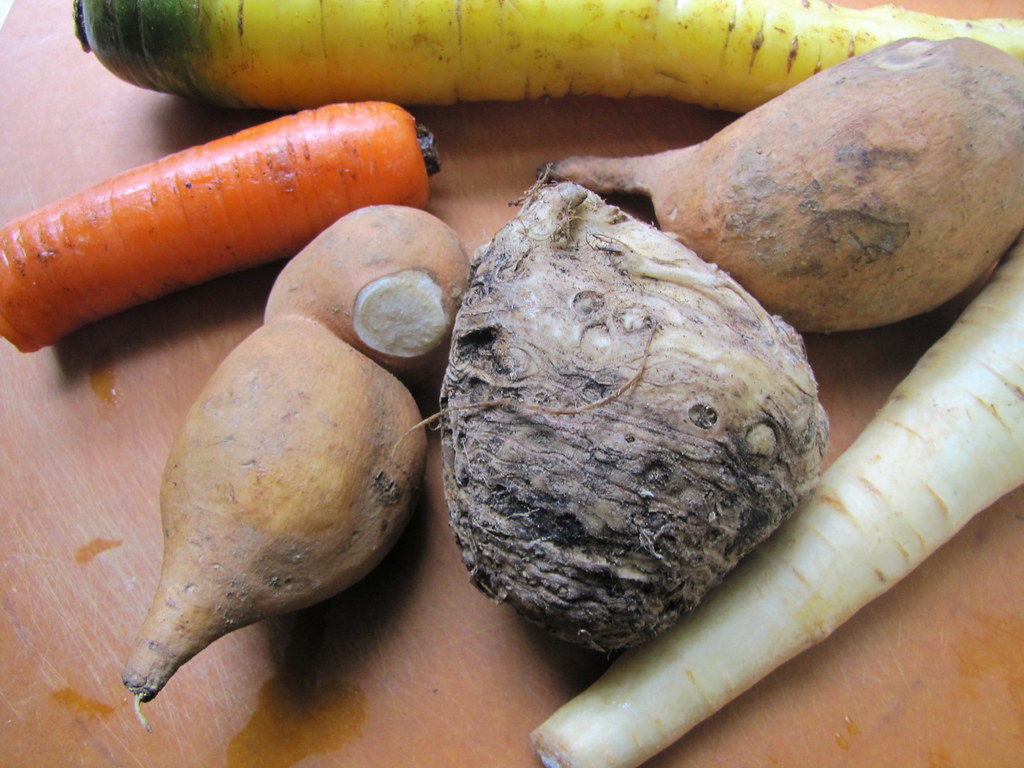 
And the seasonal produce right now in NYC is still rooted in, well, roots. I was recently tasked with making a huge lot of some kind of finger food as hors d’oeuvres for a party for GoodEggs.com, which recently launched in Brooklyn. This site allows customers to browse several unique “webstands” of food producers in their area, and of course gives local producers a convenient venue to sell their products — online. (I’ve recently moved my Farmers Market Fix dinner kits to this platform, and look forward to featuring a new menu of offerings each month on the webstand.) It’s been tried true in the Bay Area for the last couple years, and to kick off the Brooklyn chapter, Good Eggs celebrated at Parish Hall in Williamsburg Wednesday night. I made platters of mixed vegetable mini pancakes, or latkes, topped with local dairy farm Ronnybrook creme fraiche and chives. And for most of those vegetables — potatoes, parsnips, celery root, sweet potatoes and carrots — I sourced from the Upstate NY-based Fishkill Farms, also available on Good Eggs.

I wasn’t quite done with cooking root veggies and potatoes to crispy bliss after this party, and there’s still no asparagus in sight for local farms. So this savory pancake made the perfect breakfast the next day, to use up the last scraps of said veggies. (I had been too busy refilling platters of the latkes to partake in eating too much.) 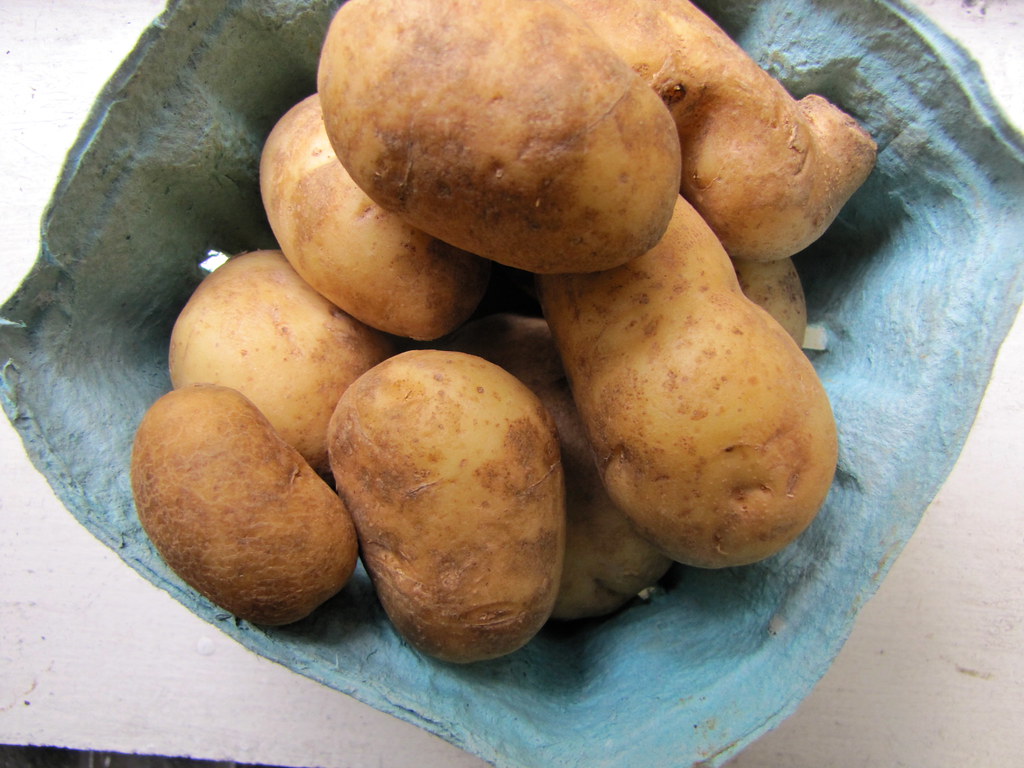 potatoes, pre-slicing with the peels intact

Because they’re starchier, you’ll need to use at least half potatoes to other root vegetables for this galette. Potatoes just have a way of sticking together, whereas the slivers of roots alternate in the galette like exotic — and slippery — leaves. Plus, they smack of classic breakfast comfort food, which you can smell as they sizzle in the buttered pan. I created the edge of the galette with potatoes only, to provide some permanent framework. Parsnip, sweet potato, celery root and carrot slices were piled mostly in the center, along with more potatoes. Everything was sliced fairly thinly, so the cooking time was minimal from start to finish. If you don’t have the help of a mandoline to achieve this, as I did, then you could always slice them slightly bigger, and par-cook the slices by boiling them a couple minutes before layering in a pan. 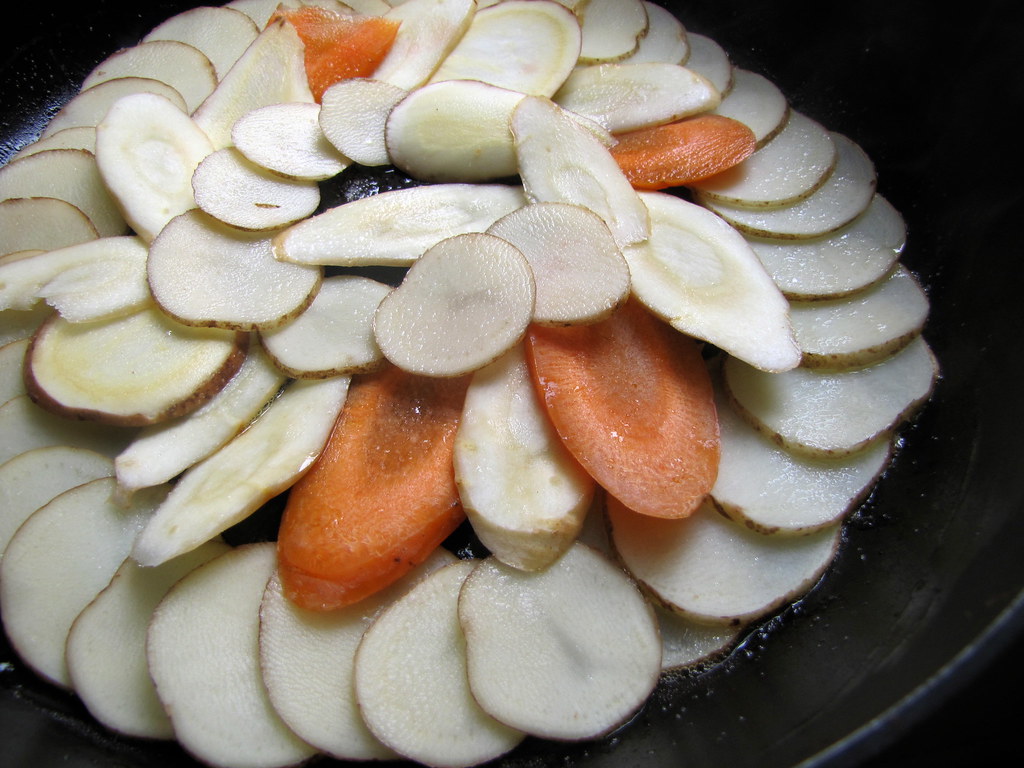 arranging the slivers in a fan-like array


I’ve used a cast-iron pan that goes from stovetop to oven, to finish the cooking. Perhaps the hardest part of the plan here is inverting the hot pan onto a flat plate to serve. Use caution! But thanks to that butter, it plopped out easily, and was a beautiful sight for my morning appetite. Topped with hot sauce, a fried egg, or just chives and some sea salt, this breakfast makes boring winter vegetables look — and taste — really good.

Preheat oven to 350 degrees. Toss all the sliced vegetables in the olive oil and a few pinches of salt and pepper. Melt the butter over medium-high heat in an oven-safe, 9-inch pan. Make sure the butter touches all around the edges of the pan. Arrange the potato slices, overlapping generously, along the edge of the pan. Arrange potato alternating with the rest of the root vegetable slices in rings throughout the center of the pan. Layer the top with more alternating slices of root vegetables and potatoes, making sure to space the potatoes evenly throughout, until all the vegetables are used up.

Cover the pan partially (with a large lid or loosely wrapped foil) and transfer to the oven. Let cook for 20 minutes. Uncover and check; if the vegetable slices have mostly turned translucent, remove cover and continue cooking for another 10 minutes, or until the edges of the galette are visibly lightly browned. If most are still pretty opaque, keep the cover on for the remaining time. Remove from oven. Loosen the edges of the galette with a spatula to make sure they won’t stick. Holding the handle carefully with hot mitts, place a flat plate on top of the pan, and quickly invert the pan and plate. Garnish the top with the fresh herbs and a sprinkle of salt and serve immediately.

Five brownie points: You not only get more flavor but more vitamins and nutrients from adding some root vegetables to your average potato-based starch dish: Vitamin A and C from the carrots and sweet potato, and lots of fiber and potassium from the parsnip and celery root. I’ve kept the peels on most vegetables, like the potatoes and sweet potato, to remain more nutrients and because they’re sliced so thinly they’re not a nuisance to the palate. This isn’t the best full-fledged meal in itself, but rounded out with a green salad and an egg for protein, it’s a great start to your day.

Nine brownie points: This dish teeters as close as they come to being fully locally and seasoned produced, with the only exceptions being olive oil, salt and pepper. Moreover, these vegetables and butter were purchased from friendly farms that are doing their part to revive the local food system, and practice safe and healthy principles in the field. You can easily do your part by supporting farms like this, too.