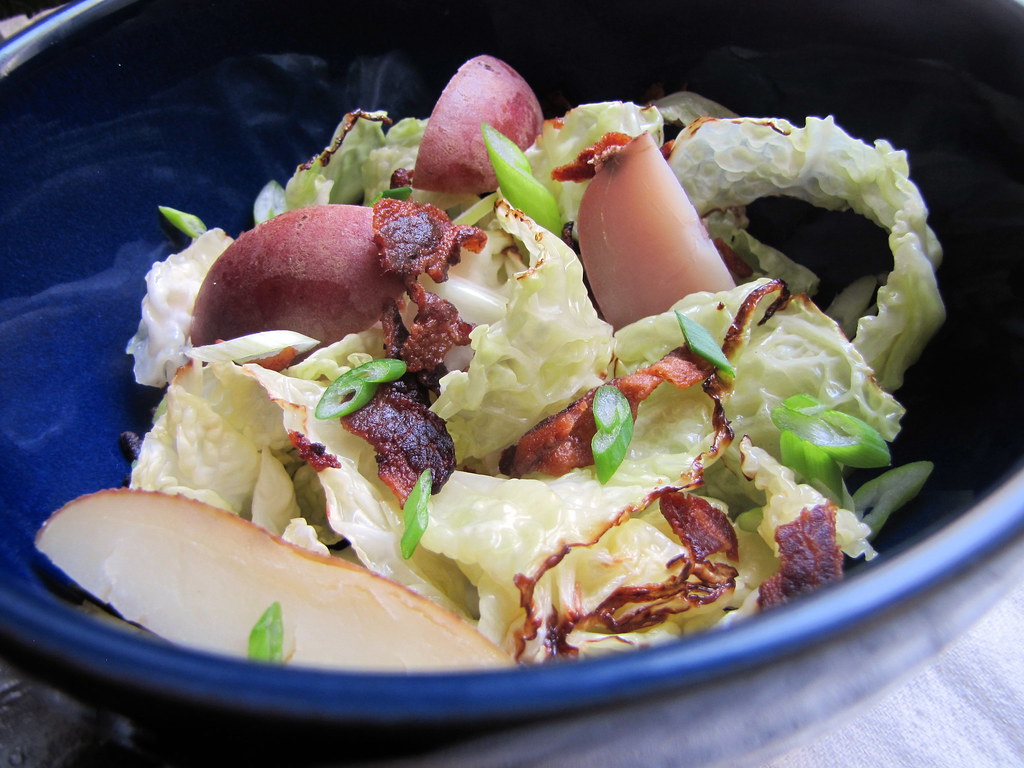 Sssizzle. One simple technique — searing — can add dramatic layers of flavor, even in places where you’d less expect it. A salad, for instance. I’ve had slightly charred radicchio and even romaine lettuce, but there’s something about sweet savoy cabbage, with its crinkly leaves, that tastes divine when given the treatment. Also, cabbage, in its many shapes and colors, is inexpensive, hardy, and readily available at a (yes, it’s still) winter farmers market. But the weather is getting warmer, and so it’s time for a salad — one that makes a good meal.


It takes just a few hot seconds to render a once bland cabbage into a smoky, crisp, and flavorful salad green. Because cabbage is tougher than lettuces, it won’t completely wilt from the process, but soften at the edges just enough to make the leaves more delicate — and sort of like bibb or Boston lettuce. I decided to sear a roughly 1-inch cross-section of a cabbage head to achieve this effect more thoroughly; the flat surface maximizes the contact with the hot pan. I also smeared the exposed side of cabbage with sea salt and olive oil, to amplify that charred flavor. You can try this recipe with red cabbage, napa cabbage, or common green cabbage as well as savoy cabbage, too. 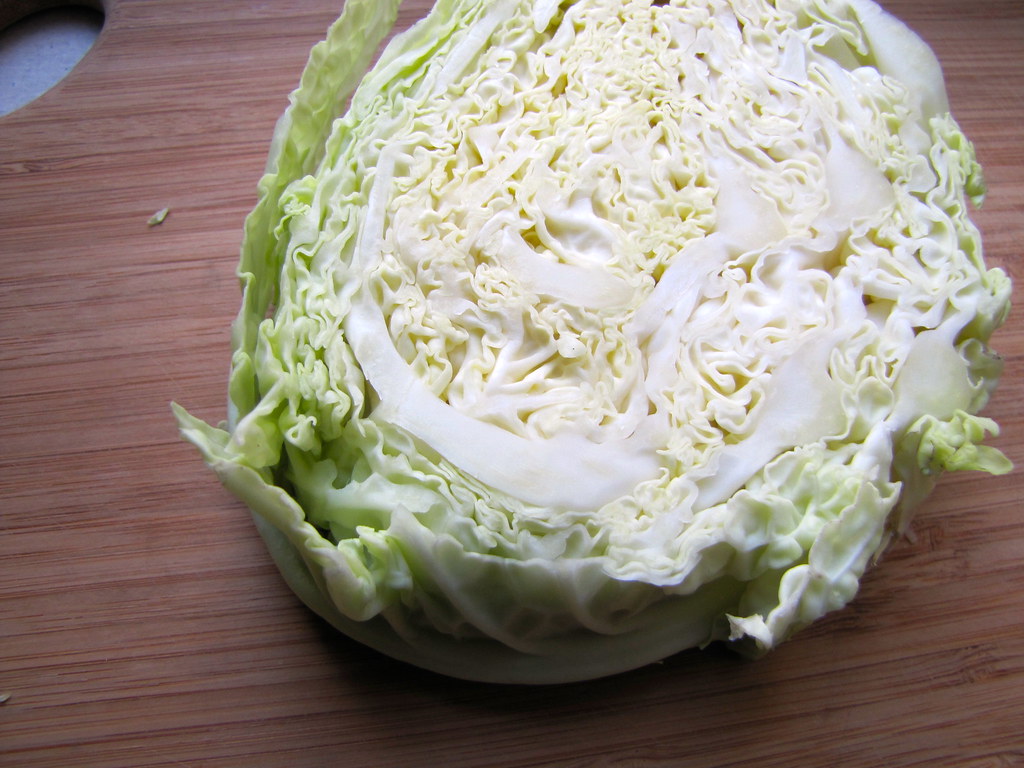 
The charred cabbage might make a decent replacement for a crisp topping in a salad like croutons or crumbled bacon… or complement it for more of that instead. I thought I’d treat myself to the latter topping, and one strip of bacon goes a long way in adding salty, umami bursts. While the pan was cooling after searing the cabbage (and the torched cabbage cross-section, cooling down a bit), the bacon was thrown onto it for just a few minutes, flipping once, and I never even had to turn the heat back on. 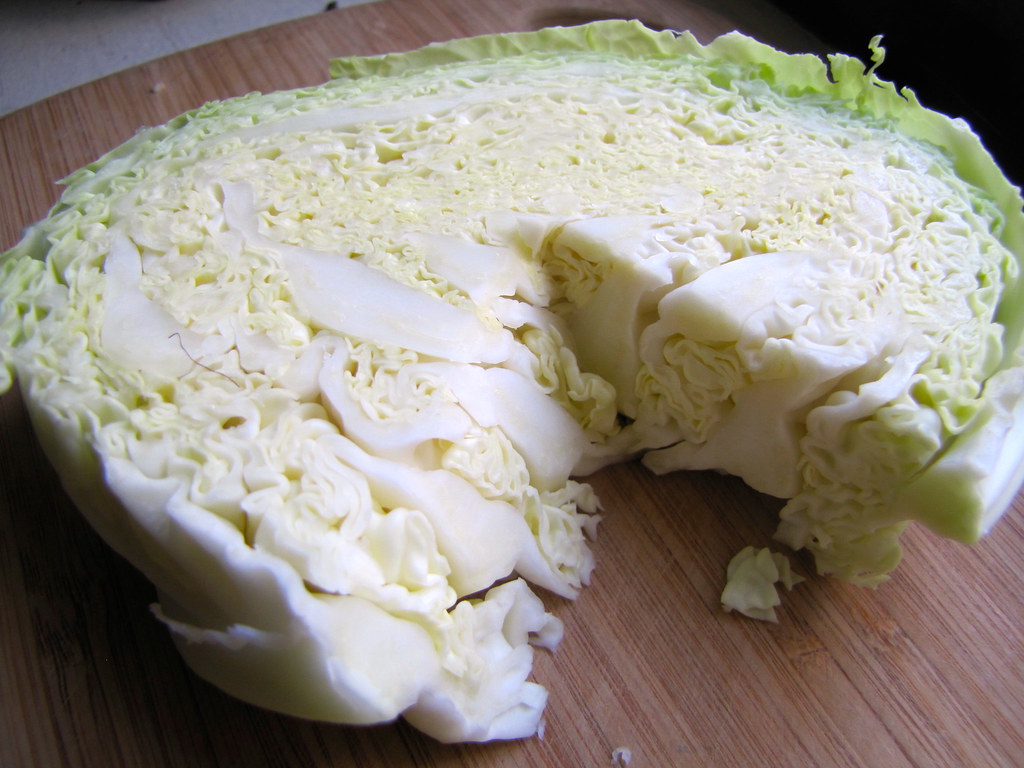 chopping out the thick core with a V-shaped chunk


Like cabbage, potatoes are abundant all winter long, and I never did get around to combining them in a pot a few weeks ago along with corned beef on St. Patty’s Day. So, thinking of classic combinations, I simply boiled some small red potatoes and sliced them to wedges once they were cooled. A single shoot of scallion chopped up made a  fresh, zesty addition to this mix. It’s a filling and fairly well-rounded salad given just these four ingredients, but some good additions you could also toss in might include hard-boiled egg, avocado, or tomatoes, cut to wedges like the spuds. 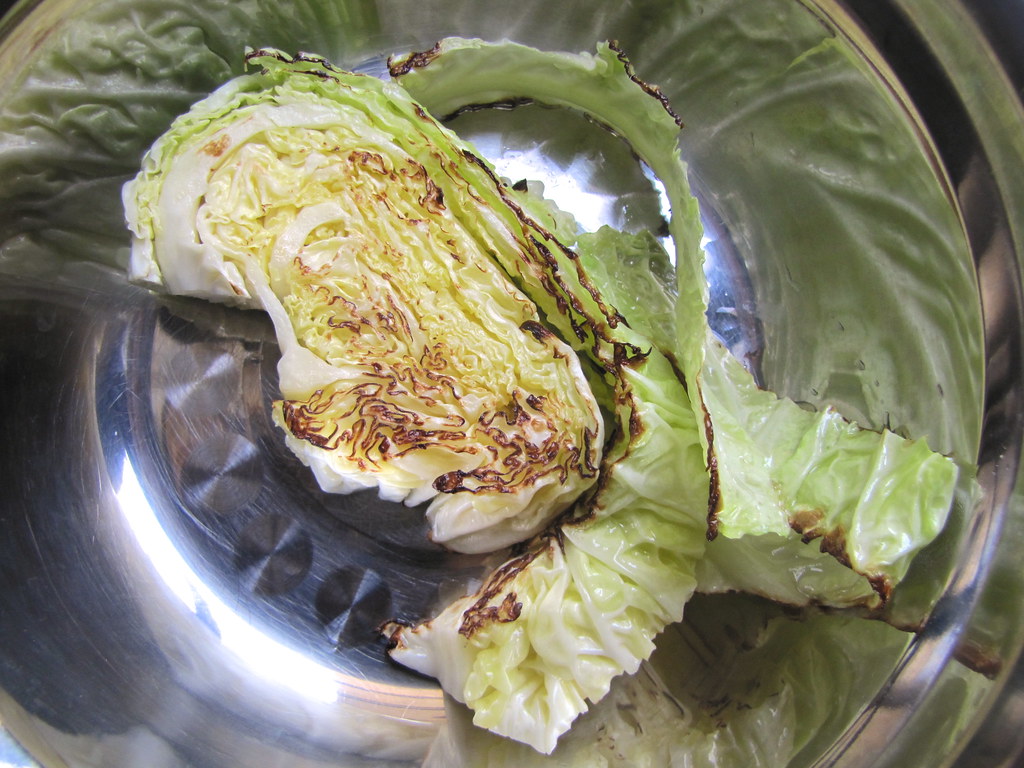 after an encounter with an angry pan


With seared cabbage as the main ingredient, there is a drastically decreased need for dressing in this salad, in my opinion. It’s already fairly seasoned — with sea salt, olive oil, and its burnt natural sugars. I could be fine with just a squeeze of lemon in the bowl. But the potatoes might benefit from a little help, so I whisked up a quick vinaigrette with lemon, oil, and a dab of Dijon mustard.

When it comes time to break out the backyard grill (maybe even next weekend?), keep in mind this little charred trick for all your vegetable sides, even the cool, crunchy salad.

Heat a heavy-bottomed pan (such as cast-iron) with about 2 tablespoons olive oil over high heat. Smear a small amount of olive oil and a generous pinch of sea salt on one flat, cut side of the cabbage section. Once oil is just beginning to jump a bit in the pan, place down the seasoned side of the cabbage. Don’t move for about 10-20 seconds. Check the bottom, and once sufficiently browned, immediately remove cabbage from pan with tongs and turn off heat. (You can let the pan cool down a couple minutes, and with its residual heat, cook the bacon until crispy in it.)

Let the cabbage cool a few minutes to room-temperature. The opposite side should be still fairly crunchy and cool. Break up the cross-section a bit by hand once it’s cool enough to handle.

In a small bowl, whisk together the mustard and lemon juice. Slowly drizzle in the olive oil while whisking. Season with salt and pepper to taste.

Toss the potatoes and cabbage with the dressing in a large bowl. Serve with the crumbled bacon and chopped scallions for garnish.

Five brownie points: I’m tempted to give this a far better health factor rating, since it involves Vitamin C and phytonutrient-rich winter cabbage so heavily. And compared to all the components in a classic Cobb salad, it’s much less rich and decadent. But along with all that fresh, veggie-based nutrition, potassium and filling starches from the potatoes, there is some cholesterol from the bacon, although it’s used to enhance flavors rather than serve as a main protein, and come to think of it, there really is no main protein here at all. Take the good and bad.

Eight maple leaves: You can still make a vibrant and flavorful meal with what little is in season currently. Searing the cabbage, using the most best potatoes (you might notice those are heirloom Adirondack Red baby potatoes in the photo), using a bit of local farm-made bacon or sausage will help this quest. The bulk of this meal came from an average day at the farmers market, and these three ingredients (potatoes, cabbage, bacon) can also be found at one all year.