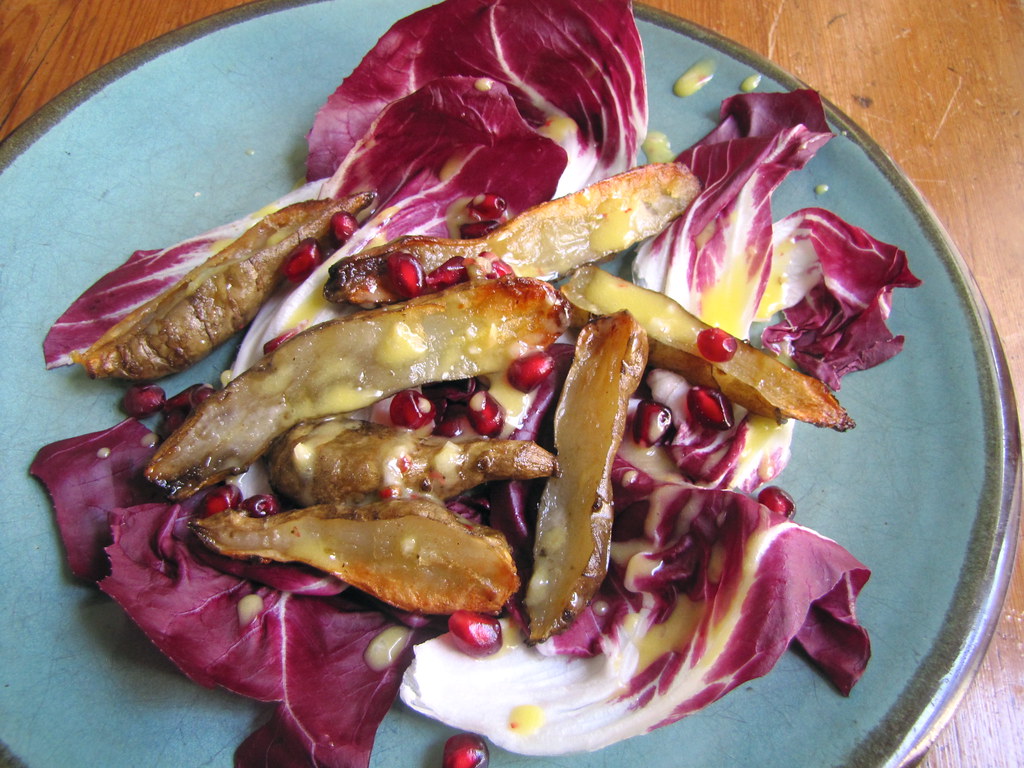 Crisp, sweet cabbages, nutty, gnarly-looking roots — who said winter wasn’t a good season for salads? I thought I’d give myself an extra-special treat this morning, since my birthday is around the corner (can you believe I’m turning thirty-one?!). So instead of the new boots I’ve been ogling, I went for some sunchokes at the farmers market, because they’re charmingly rustic-looking, too.

These tubers (like potatoes, so not a true root vegetable) are just so excitingly unique that it’s difficult to describe them. Neither are they chokes like their alternate name Jerusalem artichoke would imply, and they’re much softer and sweeter than any type of potatoes I’ve had when roasted. I can’t remember when I first tried sunchokes; but they just get better with every time. (I’m pretty certain I cooked them before ever eating them in a restaurant, so perhaps another Reason For Not Eating Out?) 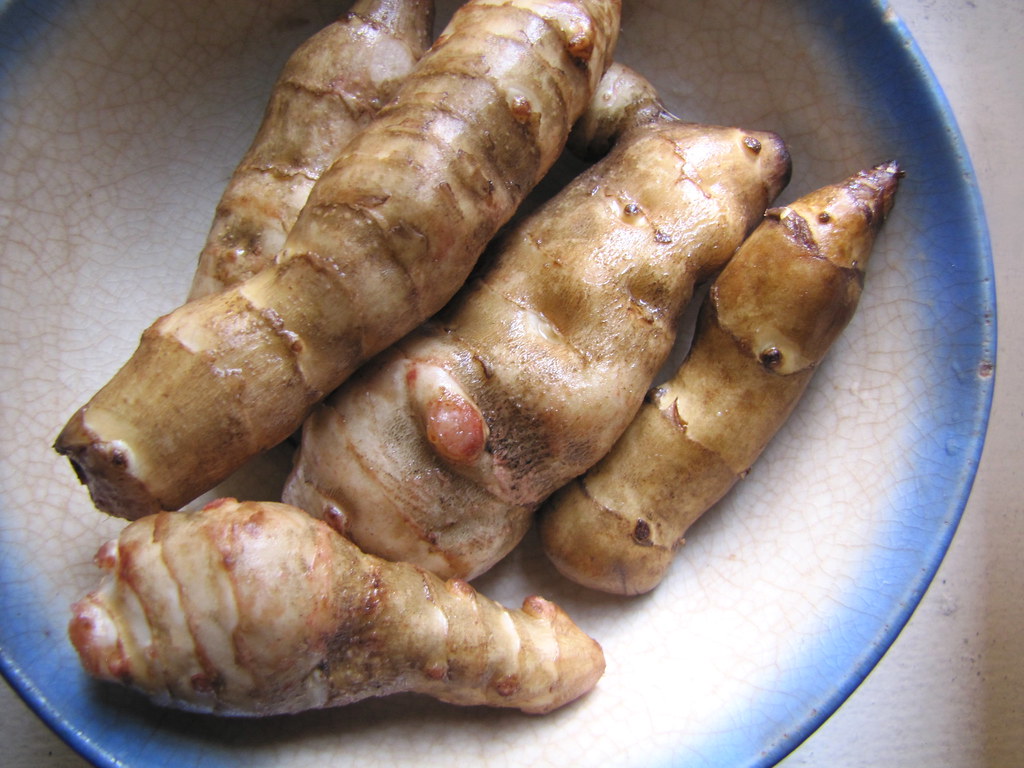 Radicchio is actually in the chicory family, along with endive and frisee, rather than a brassica like cabbage. It has a more delicate texture and appearance — which reminds me of petals of some wild, exotic flower — and a slightly bitter taste, but it’s just as crunchy as red cabbage toward its cores. I love pulling the leaves from the tightly wound, spheric head and gently tearing them to longish pieces, instead of having to shred. These less-hardy crops grow best in fall and spring, so as it’s not quite winter yet, go forth and enjoy them while you can. 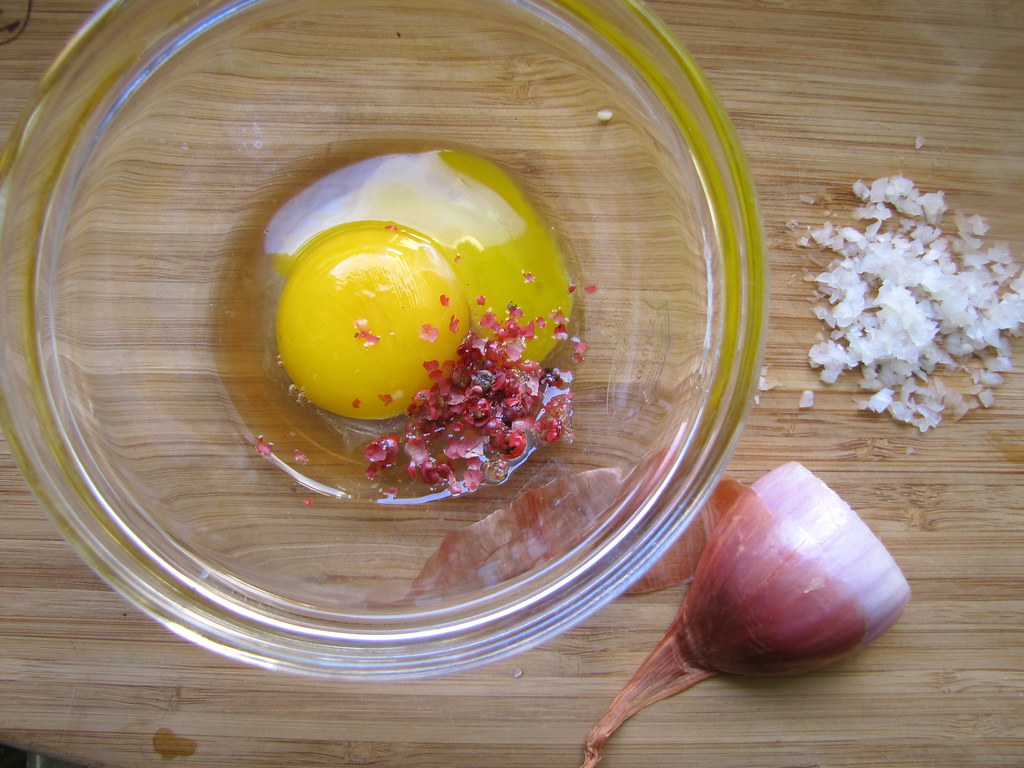 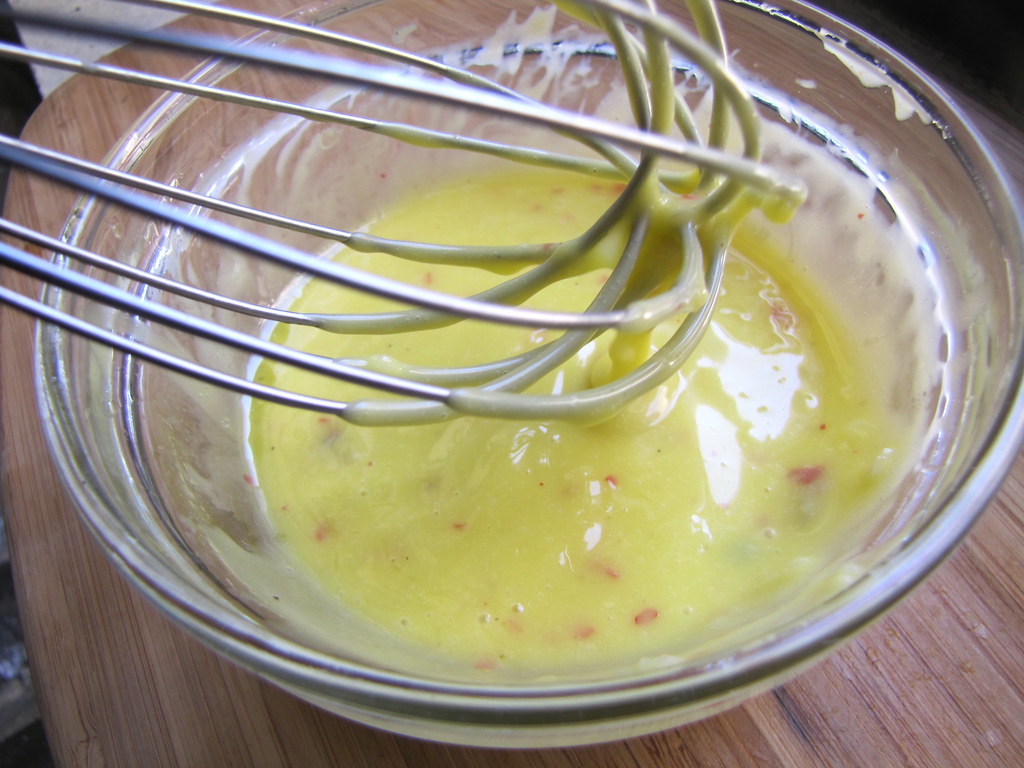 A simple dressing that spotlighted pink peppercorns seemed apt to bring out the vivid colors in this dish. Also known as pink berries, these are usually found in a multi-colored peppercorn mix. Hence, you can always pick them out of the pack if you don’t see an individual jar of just these. They taste a little milder than black peppercorns, so you can load up. I whisked mine up with an egg yolk as a base, so it’s a little bit like making aioli, only without the minced garlic — and with some finely chopped shallot instead. A splash of sherry vinegar (red or white wine vinegar works just fine, too) before drizzling in the oil helps it thicken up in no time. 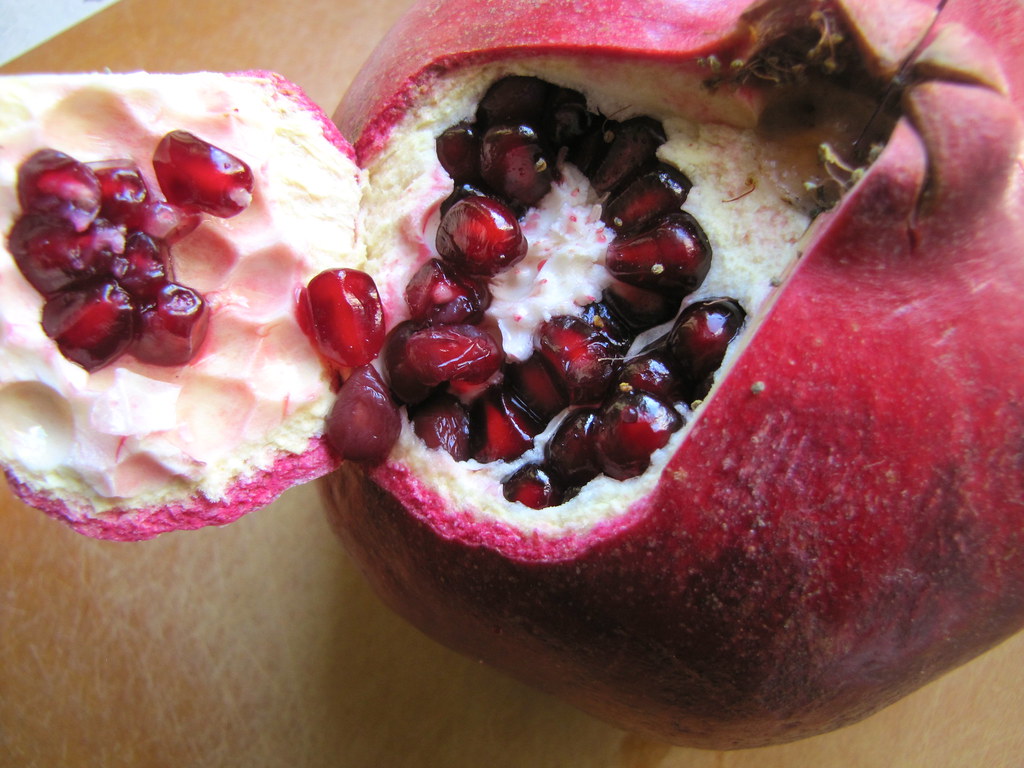 Finally, while picking up those peppercorns at a bodega, I spied pomegranates on sale! What’s more pretty in pink than clear, juicy bobules of this sweet fruit? It’s no local treasure, that’s for sure, but the pomegranate does add some nice winter pizzazz to a salad, and I had been thinking of sprinkling in some kind of seed or nut anyways. Pomegranate seeds it would be. 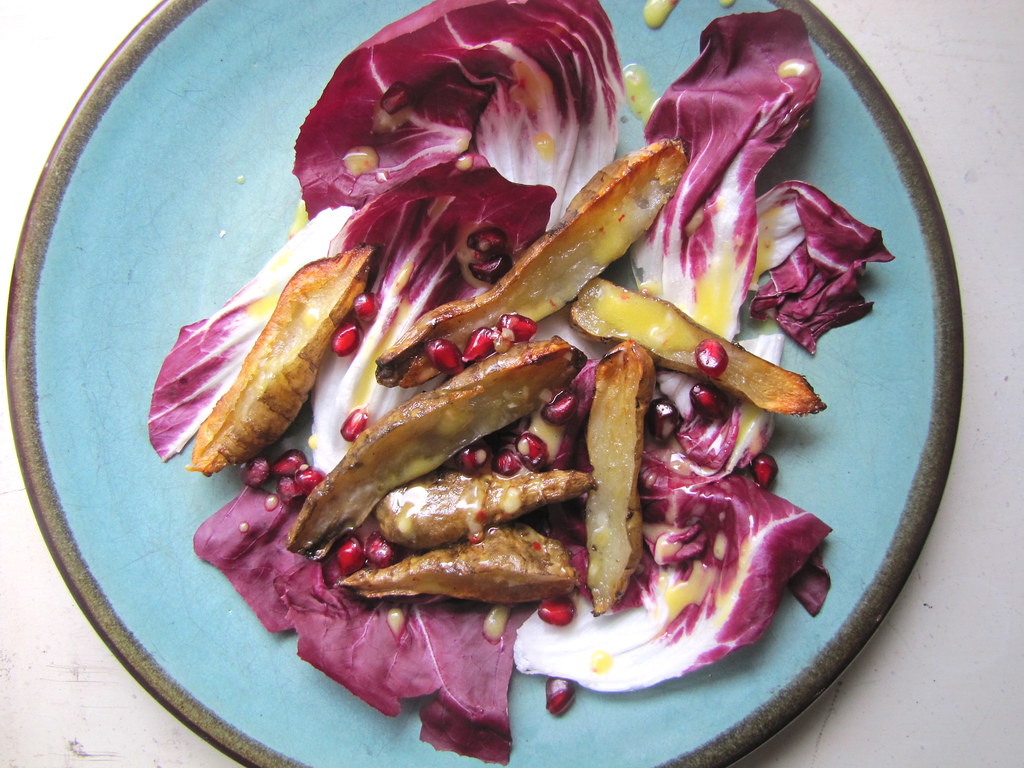 A festive side dish for a holiday party or pre-birthday brunchtime snack, this salad was almost too pretty to eat. Almost.

Preheat oven to 400 degrees. Toss the washed and cut sunchoke pieces with the olive oil and a pinch of salt and pepper. Place flat sides-down on a baking sheet and roast for about 15 minutes, depending on size, or until gently browned on the bottom and softened through. Release them from the pan once they’re out of the oven with a metal spatula and let them cool on their opposite sides.

Break the radicchio leaves into large, irregular pieces. Top with the sunchokes and scatter the pomegranate seeds on. Drizzle with the dressing and serve immediately.

Four brownie points: A very considerably healthy salad, for a savory addition (roasted sunchokes, rather than grilled meat. The radicchio has lots of antioxidants, Vitamin K and fiber, and the sunchokes are high in potassium and iron, while having some natural sugars. Let’s talk about the dressing: while it’s a richer, eggier sort instead of a basic vinaigrette, by making it yourself there’s no preservatives or other chemicals (plus it’ll taste so much fresher).

Five maple leaves: Sunchokes, which are in season locally here in the Northeast, are really a unique find from small specialty farms that I don’t think you’ll see in too many stores from industrially-produced sources. Definitely a plus for shopping locally and in season. The radicchio wasn’t from the farmers market, although I’ve seen it at times there — but as a popular salad green you can find it in many grocery stores grown organically, in California, usually. Pomegranates demand warmer climates than this region provides, so that’s a far-flung exotic purchase, like winter citrus fruits. Perhaps the greatest pro for this dish from a purely carbon-footprint perspective is that it’s all plants, and so satisfying (save for a yolk from a local chicken’s egg).