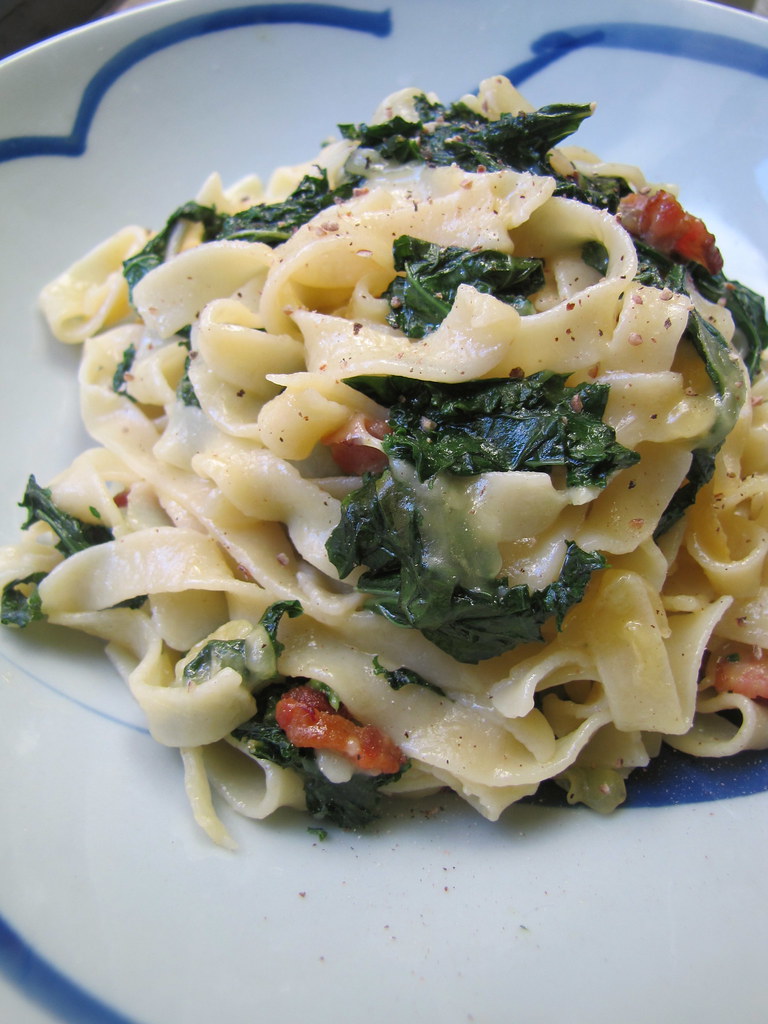 It’s rare when a dish is both uniquely effortless and divine; this doesn’t happen, for instance, when making a decadent, double dark-chocolate cake. It doesn’t exactly hit the same satisfaction triggers either when you toss together some greens with bacon and cheese. But when you fold all the latter three into some hot pasta, along with silky egg yolks and olive oil, there’s some jingling in the air, and the angels will be smiling down upon your kitchen from above.


That’s essentially what pasta carbonara is — simply divine. Rustic but rich. Fantastic. And since it’s a bit too rich for my blood on its own, I’ve added some deep-green kale leaves that wilt seamlessly into its eggy fold.

A new tradition? Perhaps. I should mention that I write this recipe half-thinking of my brother, who is perpetually perplexed by what to do with his CSA vegetables given the few standby recipes he can make (which happens to include the basic, 10-minute spaghetti alla carbonara of college-age faves). But I think it’s so good I will claim it for my own even if I have a long Sunday with which to do much more on the stove. 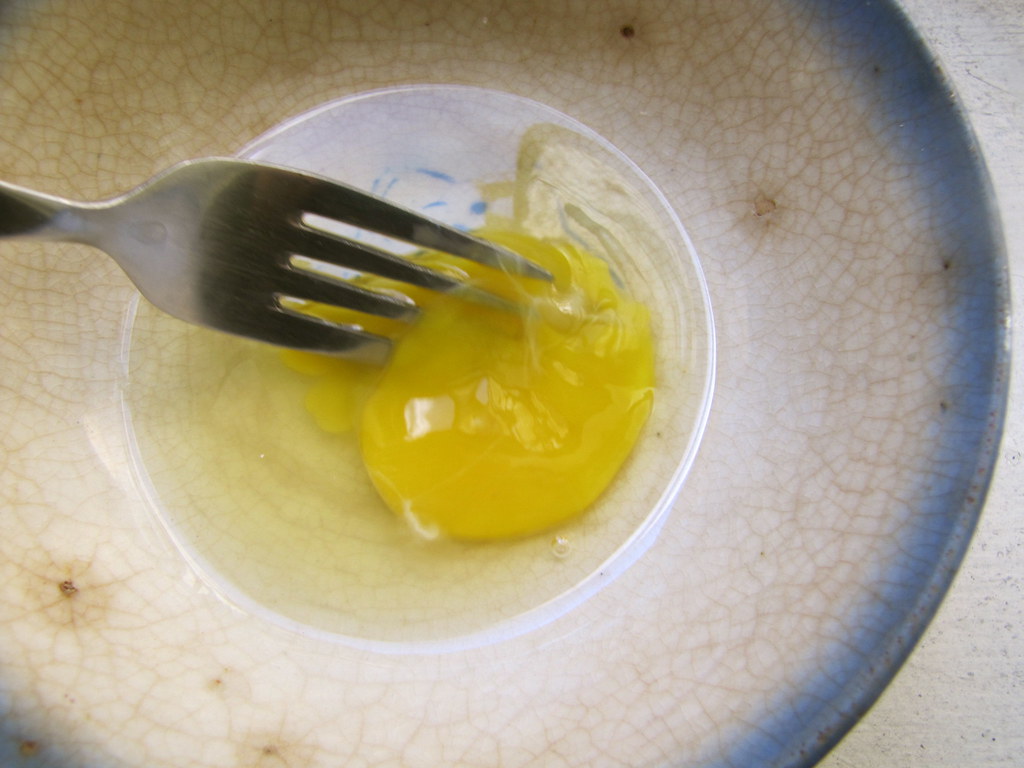 eggs are beaten and combined with grated cheese 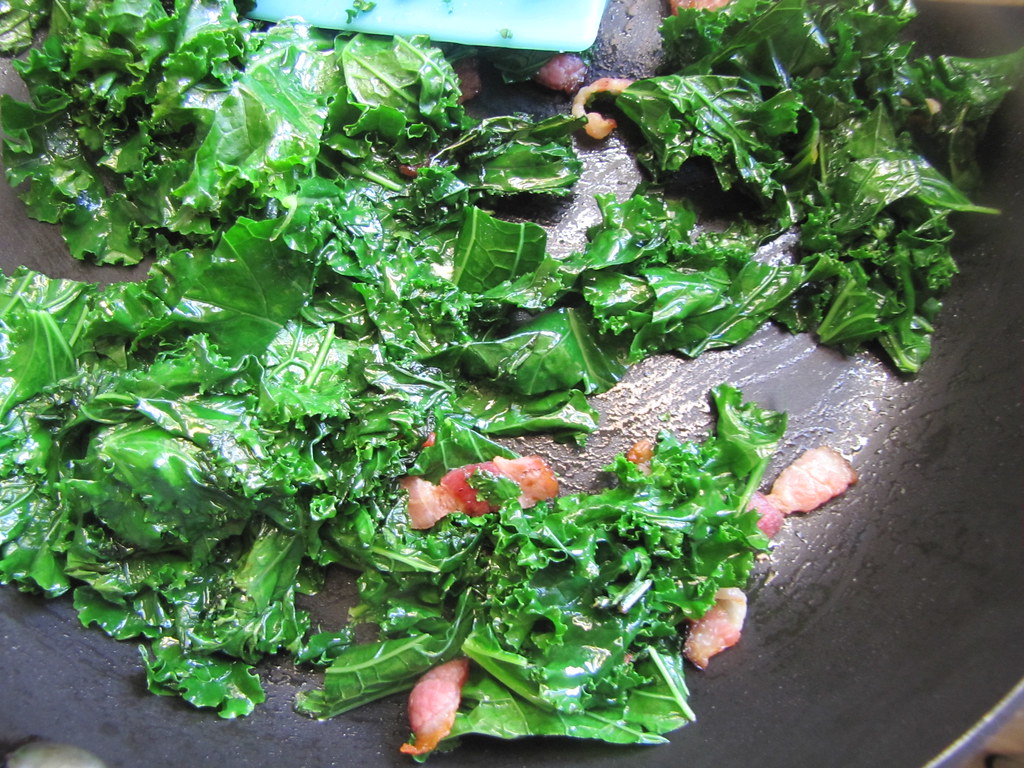 small bits of bacon are browned, and the kale is slipped in 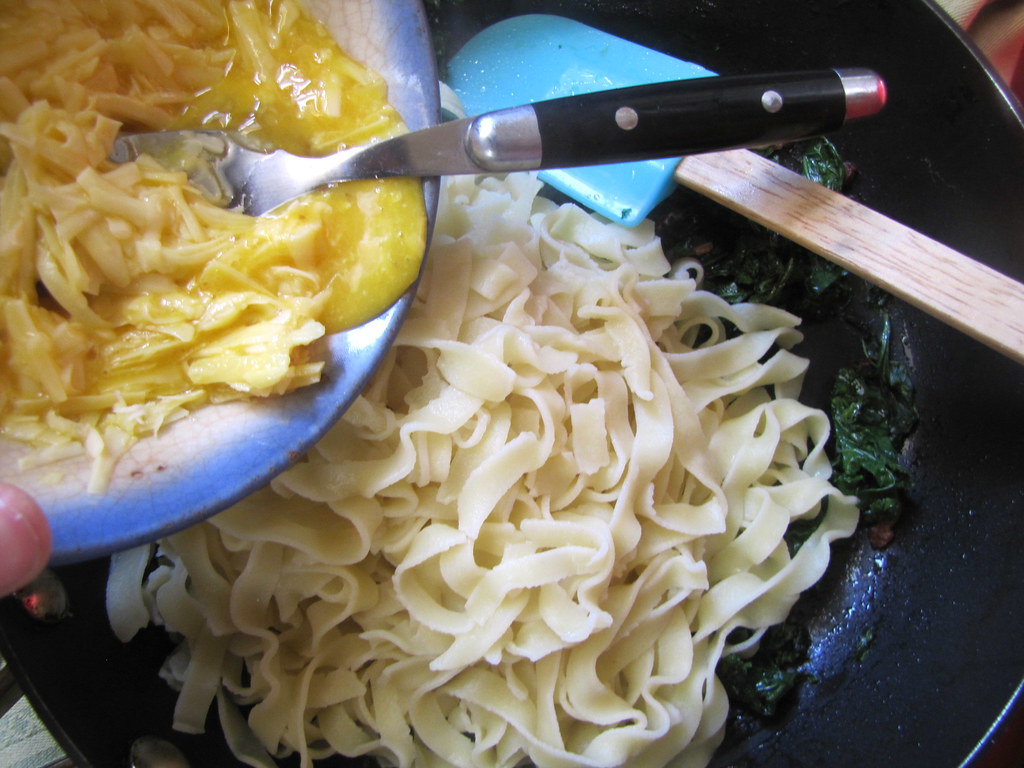 hot pasta is combined and tossed away from heat

I haven’t come across too many variations to the classic pasta carbonara. It’s just bacon (or pancetta or guanciale), cut to lardons and browned, tossed away from the heat with just-cooked pasta, beaten eggs and cheese. Maybe some butter, too, and definitely some rounds of freshly ground pepper. Though it seems like a dish that farmers tucked into in a Tuscan wilderness, it’s attributed to more urban, and 20th-century roots. It’s similar to cacio e pepi, another pasta dish from Rome, with simply butter, cheese and black pepper. 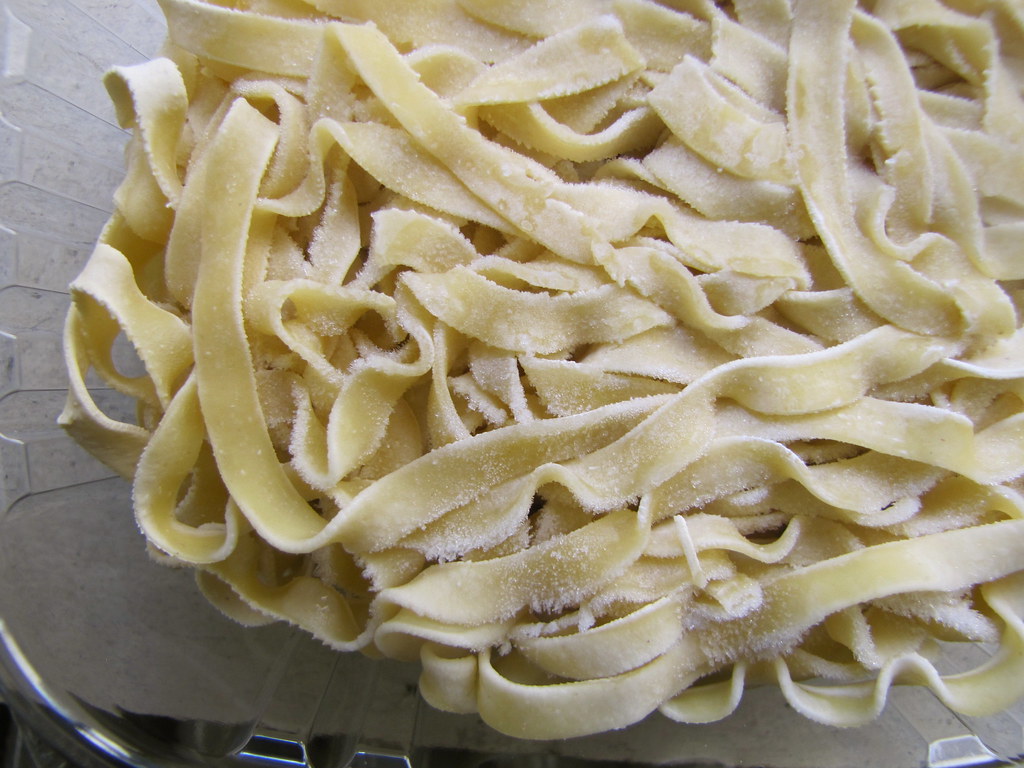 
A great improvement to this dish (aside from the addition of kale, for all its nutrient density) is the use of fresh pasta, if you’ve ever tried it before with dried. Fresh pasta, cooked to just underdone, becomes luscious and slippery but tender inside, a great complement. For the past few Wednesdays, I’ve been getting my weekly portion of fresh pasta from Knoll Krest Farm, at the Union Square Greenmarket. They make their pasta from semolina flour and their own pastured chickens’ eggs (available to purchase fresh by the dozen, too). Boy is this some good fresh pasta, and not the least bit expensive either at $5 per 12-ounce pack. I try keep one in my freezer at most times, as it’ll cook straight from frozen just as well. 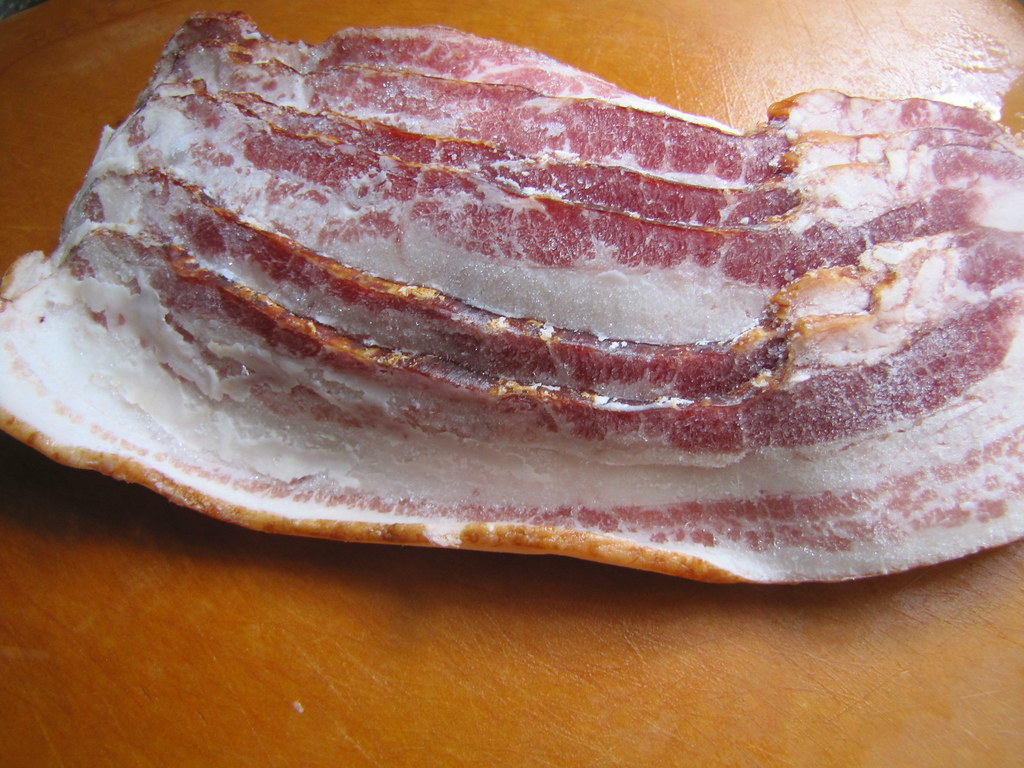 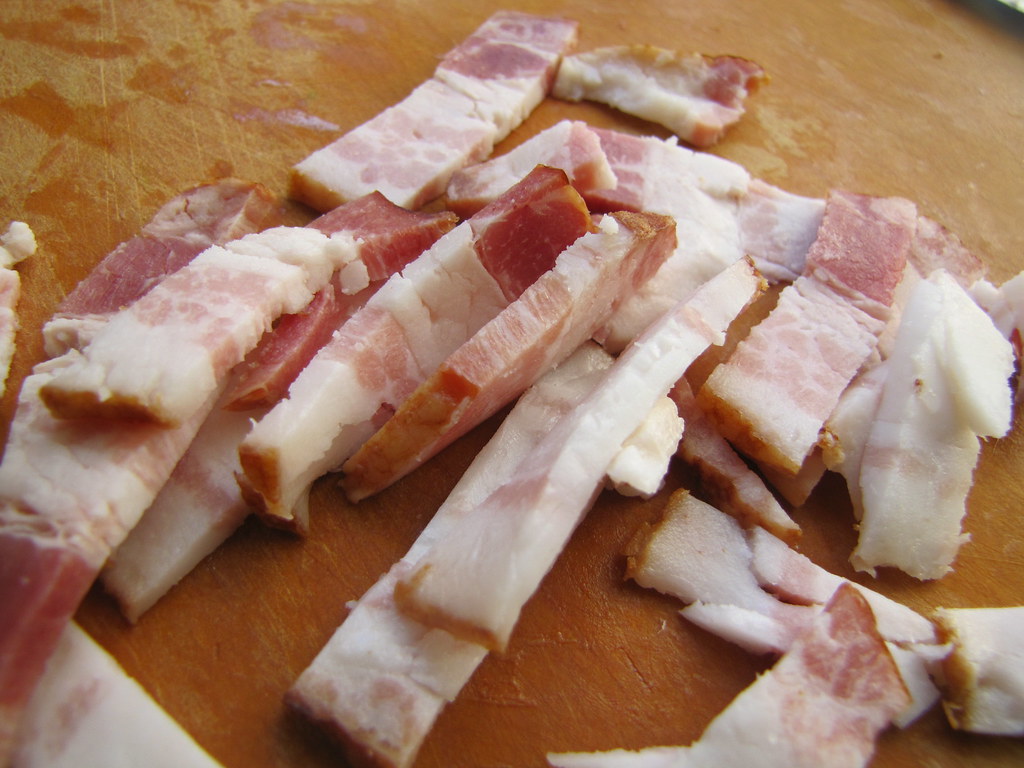 
Also in my freezer as a backup boost is invariably some form of bacon or cured, porky meat. I use so little of it (for seasoning dishes, mostly) that it makes sense to freeze it after each use. I’ve been going through a pack of Flying Pigs Farm’s house-cured bacon for months now; it’s thick-cut and so flavorful I could chip away at it happily for many more. 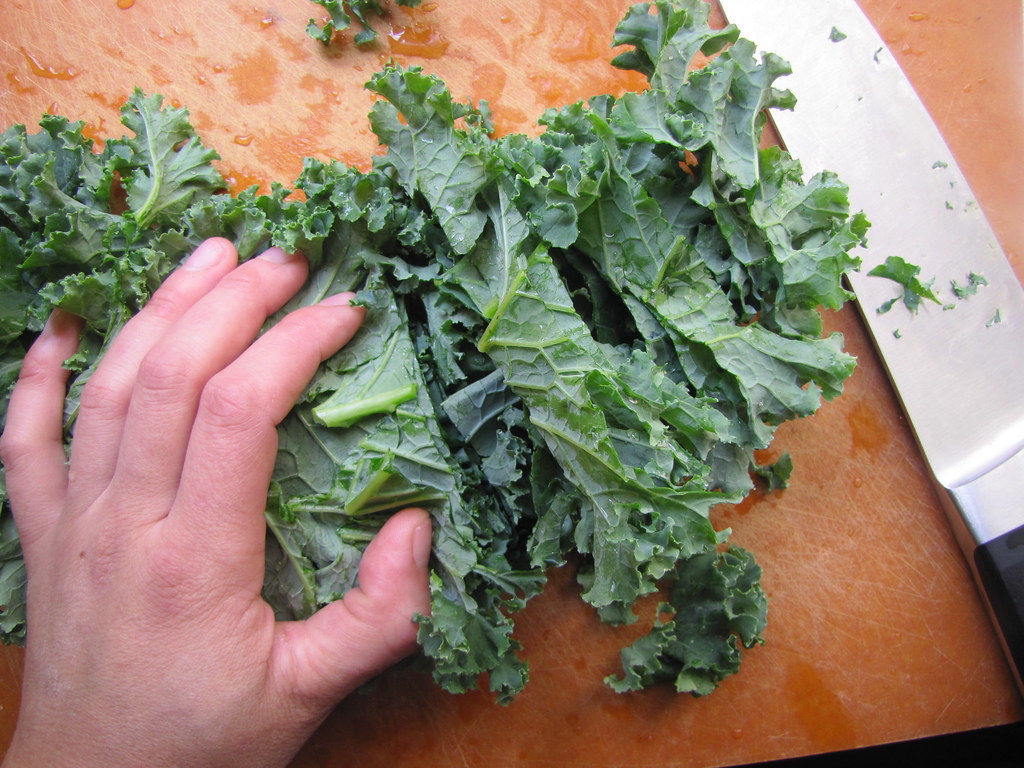 
Kale is just one suggestion for a leafy green to add to this heavenly mix. A spicier type like mustards or arugula might lend an interesting note here instead; or you could go with cabbage or Brussels sprouts which are in season for fall now. I like kale for its bountiful volume, that cooks down so impressively to seaweed-colored threads (and indeed shares many healthful properties with it). It’s a mild-tasting brassica and the standard, curly type might look a bit intimidating to chop, but fear not. Just zip the leaves off their thick stems with your hands by holding them at the bottom. Tear or coarsely shred them stacked up on your board; it doesn’t matter how large or small. With all that’s leftover from your bunch of these greens, you can start thinking of how to slip them into other classic dishes next. 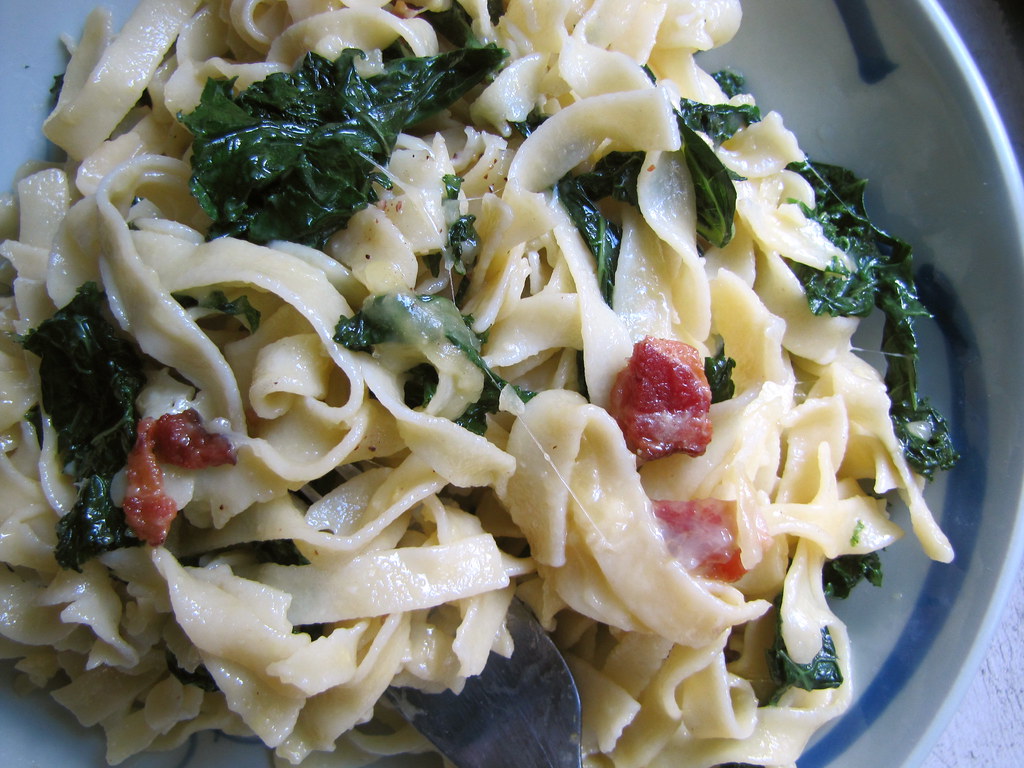 Bring a pot of salted water to a boil. Wait until you have prepared all the ingredients (such as grating the cheese, mincing the garlic, etc), before you drop the pasta in. Combine the grated cheese with the beaten egg and yolk in a bowl.

As soon as pasta is al dente, transfer with tongs to the pan of kale and bacon, and remove from heat. Stir in the egg and cheese mixture. Toss thoroughly (making sure the heat is not on, so as to not cook the eggs). Stir in the tablespoon of olive oil or butter and extra black pepper to taste, and serve immediately.

Seven brownie points: A pretty good illusion for being really healthy is adding a superfood vegetable to an otherwise greasy, rich food — like pizza, or spaghetti carbonara. I’m guilty of that here, but if you’re going to opt for a really greasy food anyway, it’s a wise idea to get your greens, too! The bacon, cheese, and egg will add plenty of cholesterol to this dish, but at least kale is enlisted to help balance that in your blood, along with providing ridiculous amounts of Vitamin A, C and K.

Eight maple leaves: I can’t think of anything here that wasn’t purchased locally from a small, conscientious farm at the Greenmarket — besides the black pepper and tablespoon of olive oil. It’s a local and very seasonal meal that can be made (unusually enough) year-round in the Northeast although frost will weaken the production of kale, so go for it now while the ground is still warm enough!