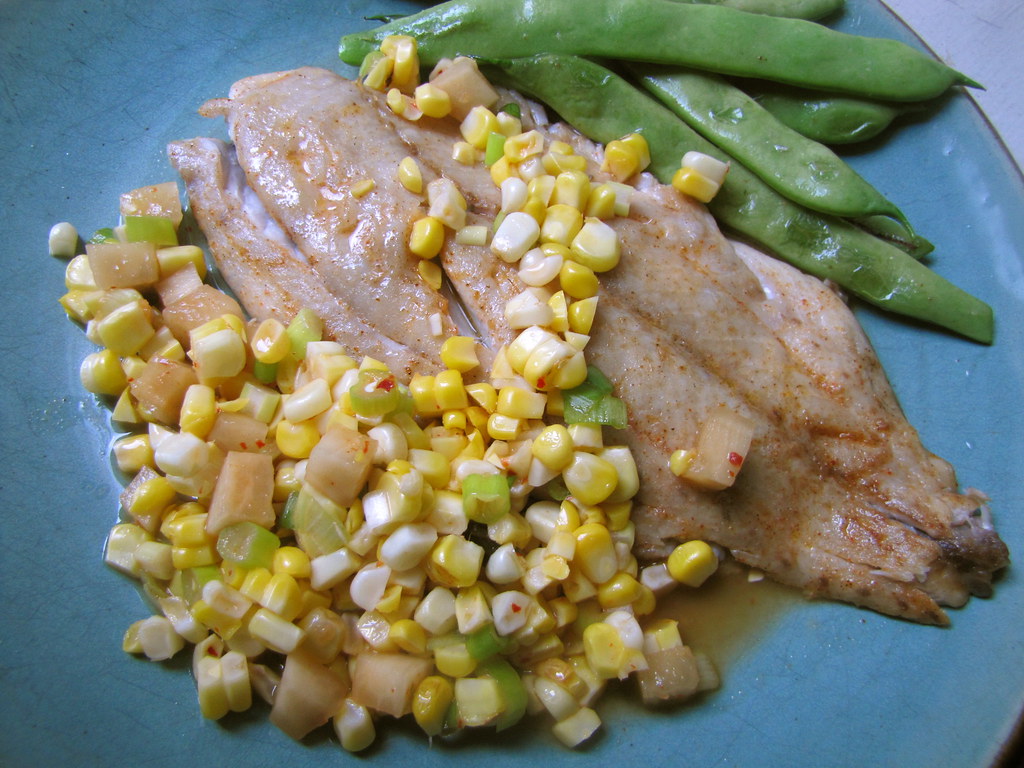 I don’t get the hesitation over darker, oilier, “fishier” sort of fish. Bluefish, mackerel, herring, sardines — these are the flavorful dark meats to bland white meat chicken (of the sea). If you’re one who prefers full-flavored, juicy cuts like chicken thighs or pork shoulder instead of loin, you might find common ground in these highly undervalued types of fish. Then again, the fillet of bluefish I broiled here was so fresh, it tasted clean and just faintly of the sea.

I enjoy all types of fish, from sweet, white-fleshed ones to unctuous anchovies. When I splurge on fresh seafood at the farmers’ market, I look for especially fresh, appealing ones that day but also at the pricetags. No matter where you shop for fish, bluefish is bound to be one of the least expensive, if the market even deigns to carry the supposedly less desirable fish at all. But bluefish (like mackerel and sardines) are much richer in precious omega 3 fatty acids than white-fleshed varieties, and are a sustainable choice compared to these commonly more exploited species as well. Bluefish can grow to rather large sizes, which will result in higher levels of mercury thanks to biomagnification; hence, the fish has been related with high mercury. But if you get only small fillets — of any fish — and scale back on the big, carniverous ones in general, you’ll reduce the concern significantly. The fillet I found from Pura Vida fisheries at Union Square Greenmarket was hardly the size of a flounder. 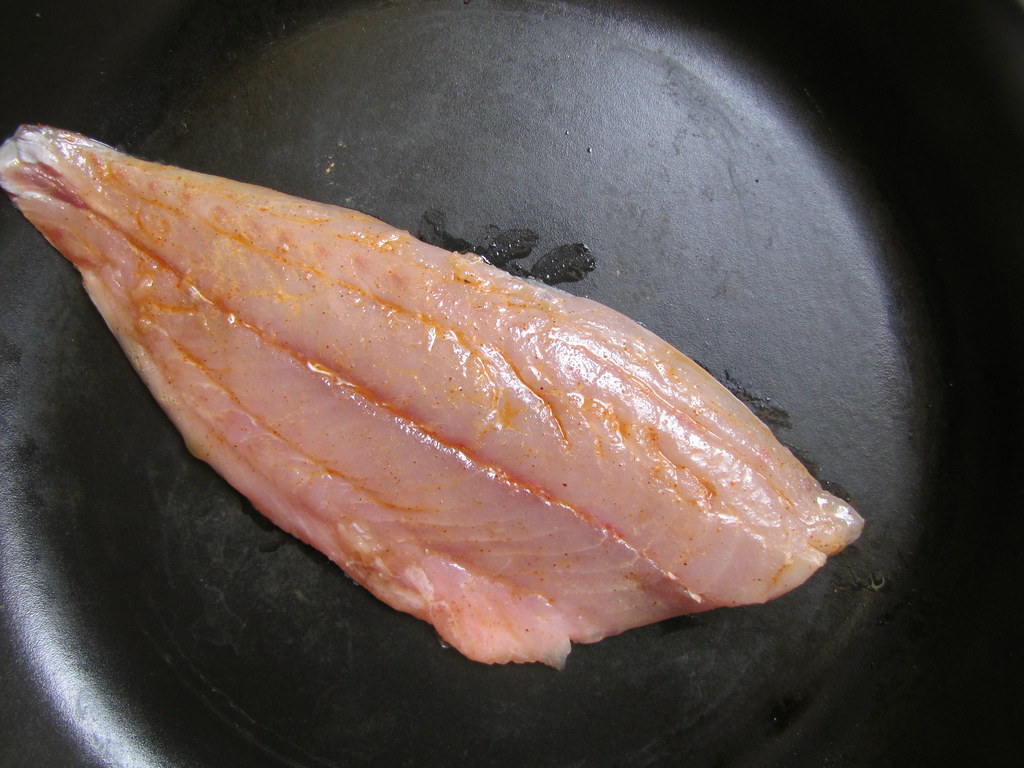 Thinking that it would have a fairly strong taste as far as fresh fillets go, I decided to toss together a spicy, vinegary salad as a topping. Fresh corn is irresistible while it’s still in season, so I lightly charred a cob and cut off the kernels to pair with something tasty. Fortunately, I had some daikon kimchi in my fridge (from Kheedim of Mama O’s Kimchi), and chopped up into smaller cubes, these made a strikingly sour, salty, and spicy complement to the sweet corn. A little extra juice from the jar and a chopped scallion, and the lovely salsa was ready to go. A really fresh, boneless fillet of fish is perfect for broiling just until cooked through. It should take all of one minute or so until the flesh is juicy and just flakes apart. 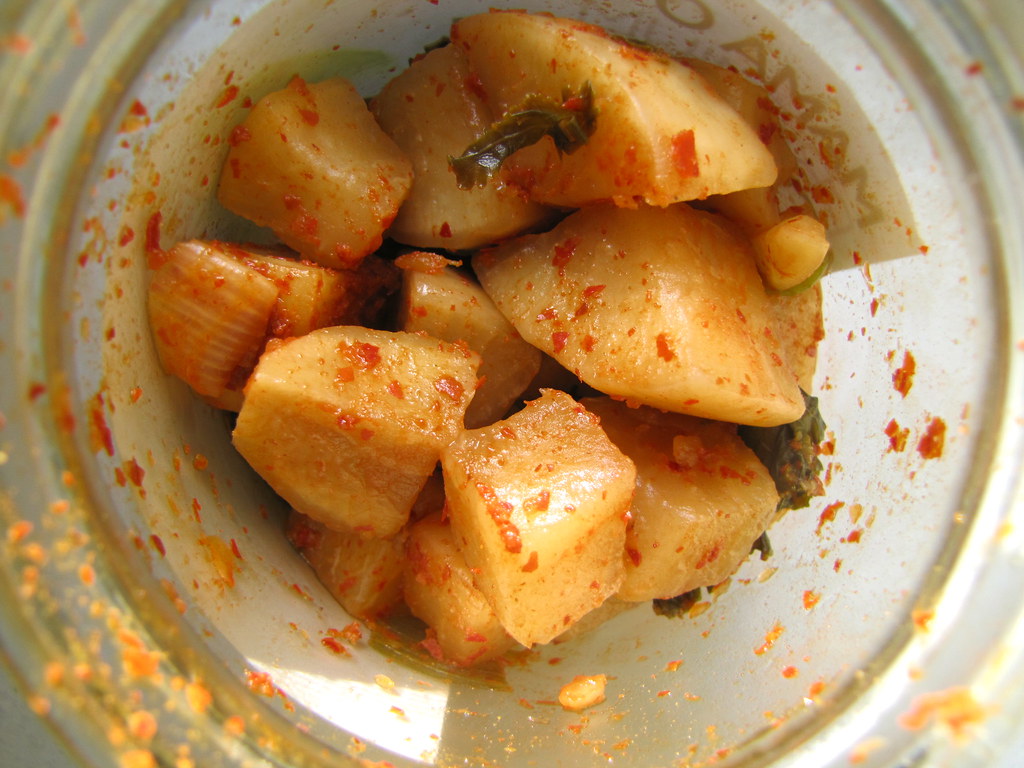 
To reinforce the spicy theme, I dusted the fleshy side of my bluefish fillet with a little cayenne pepper and salt, and rubbed it in with a dab of olive oil. (This would also give the somewhat bluish cooked flesh a little warmer color.) About a minute into broiling the fish, I decided to cook the clutch of fresh pole beans I’d gotten at the market that day also on the same pan. After tossing them quickly with salt, pepper and olive oil, just the big, burly romano beans were spread next to the fillet and given a quick toast under the broiler flames. 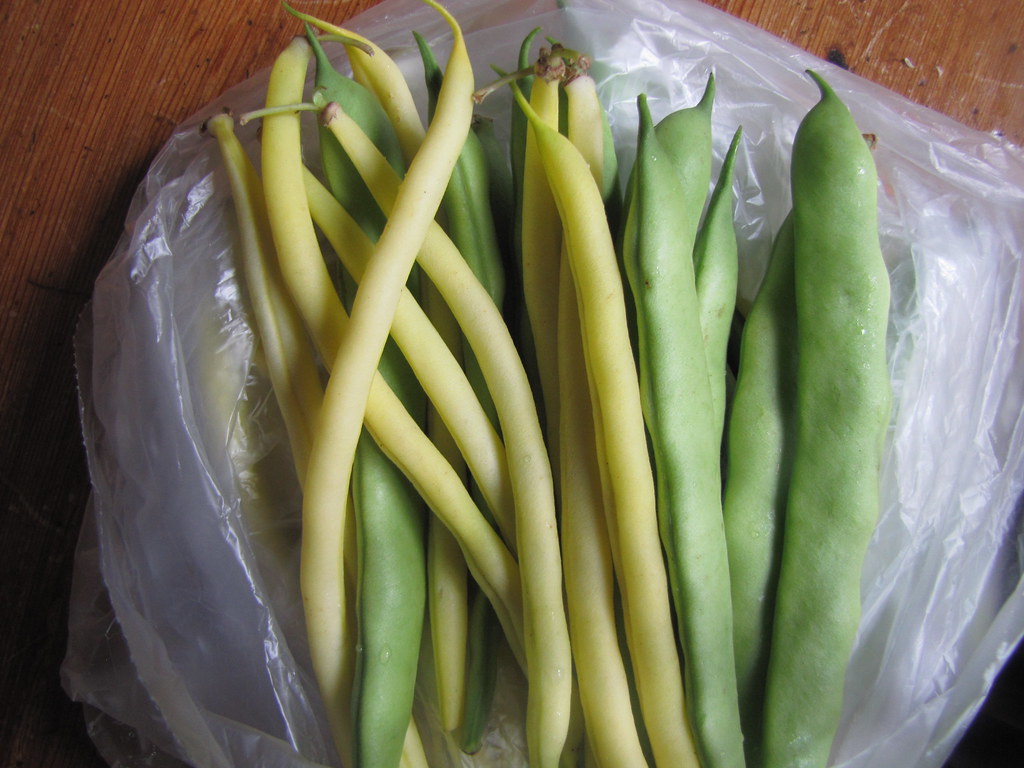 
A squeeze of lemon juice might have suited this duo just fine after pulling them from the oven. But the corn and kimchi salad was even more refreshing. I used the leftovers of this salad to stuff into grilled cheese sandwiches throughout the next week. Definitely a useful combo for lots of dishes, but its pungent flavor pairs best with a powerful-tasting protein. And if you’re reading still, that’s probably just what you like. 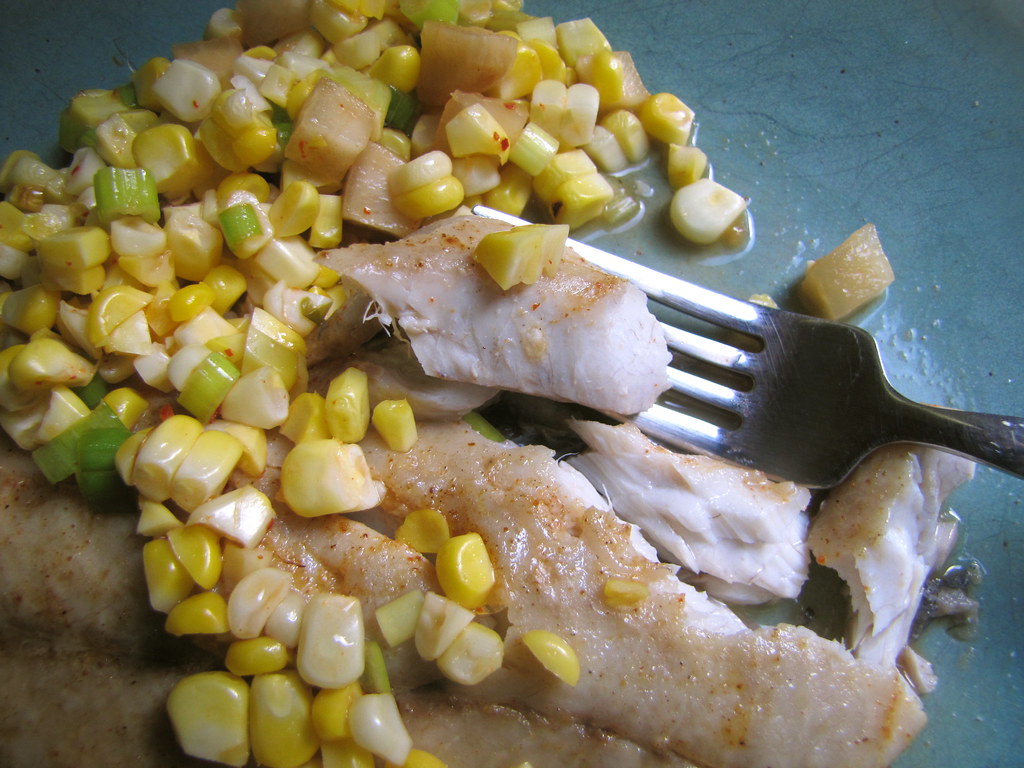 Boil or grill corn and once cool, cut off the kernels. Combine the corn kernels with the daikon kimchi cubes, chopped scallion, and some extra juice from the kimchi. Drizzle with a little olive oil and season, if desired, with a touch of salt and pepper to taste.

Broil the bluefish fillets for about 1 minute. Add the romano beans to the same pan and continue broiling for another 2-3 minutes or until the flesh of the fish is firmer and opaque throughout. Transfer to serving plates and serve with the corn-kimchi salad.

Five brownie points: Mercury warnings aside (see above in the post), this is a deliciously well-balanced meal, with much-needed omega 3 fatty acids to help balance out all the cholesterol in the typically meaty American diet. The crisp green beans and fresh corn will provide fiber, protein, and filling power to make up for there not being any real “starches” in this summertime meal. The daikon kimchi contains live active bacteria to aid digestion (as well as lots of flavor). And while the fish may be “oily,” its own juices and that of the vegetables will create a thin, lipsmacking sauce on their own.

Seven maple leaves: Bluefish are a “good alternative” on Seafood Watch, and their locality on the East Coast is apparent in their wide availability from local Long Island fishmongers, such as Pura Vida. They’re most abundant during the summer months. The fresh corn and green beans in this dish certainly are, too, making it a seasonal and locally sourced meal (even including the kimchi, made by local artisanal producer Mama O’s.)