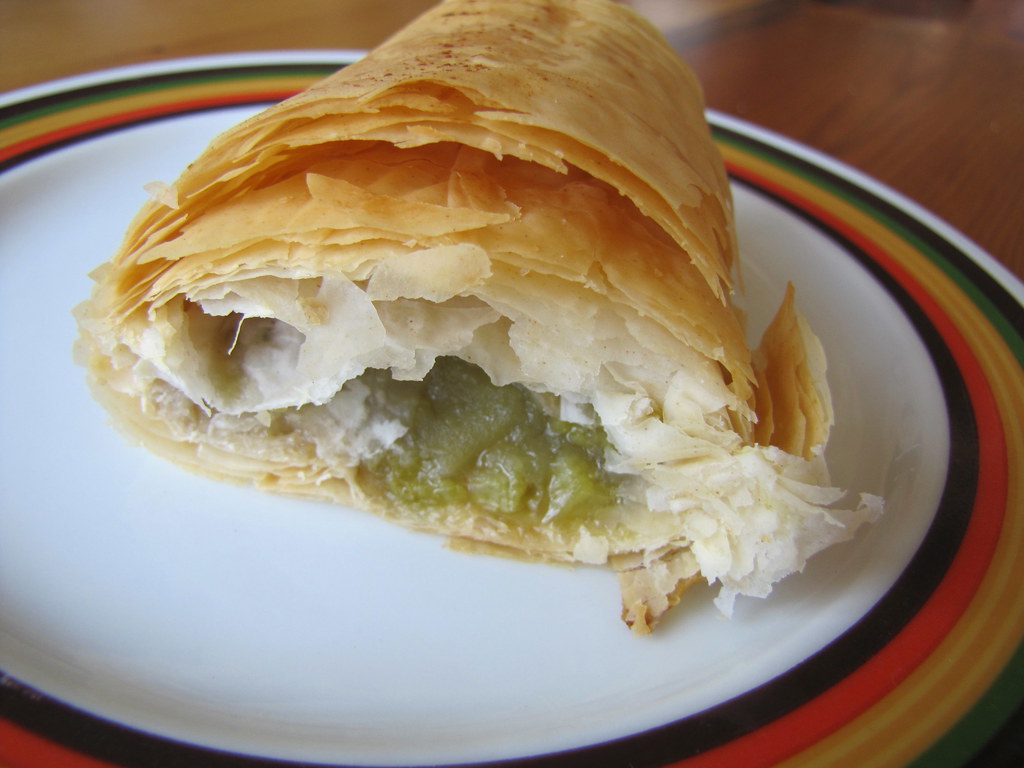 Never pass up the chance to buy rhubarbs whenever you can. Even if you only have the means or capacity to get a few stalks. You don’t have to make a whole pie; and you can always put them up as a jam. So bright and tart-tasting, easy to prepare, and limited to a short window of spring, rhubarb is worth the risks of getting creative with — or adding to whatever you’re making anyway.

Like apfelstrudel. This flaky pastry filled with fruit is a fine vessel for rhubarb, I’ve recently found out. I was preparing a typical Bavarian lunch for the German Braumeister at the brewery, with imported weisswurst, brezels (pretzels), homemade sauerkraut and a shoddy attempt at potato knudel, when I thought that a light dessert of strudel would be a fitting way to finish. Turns out that strudel actually originates from Austria, although it’s enjoyed pretty much throughout Europe as well as the States. 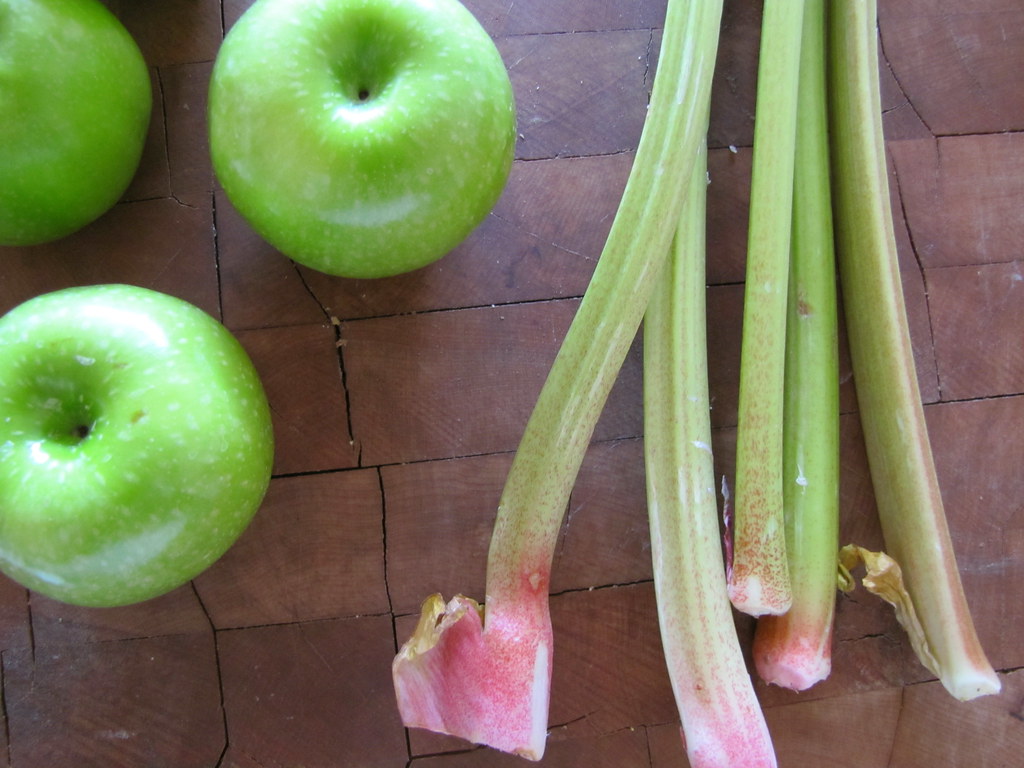 It also turns out that making traditional strudel dough is pretty brutal. If you’re setting out to do it from scratch, I don’t envy your task — pulling out dough to paper-thin sheets, laying it across towels or parchment and rolling it up without tearing. Unlike the puff pastry and other buttery, leavened doughs which apple strudel is often made with nowadays, the traditional strudel has much finer layers that are rolled up around filling. It’s not a perfect substitute but phyllo dough (or filo dough) is similar. So I bought some frozen sheets of that and called it a day. 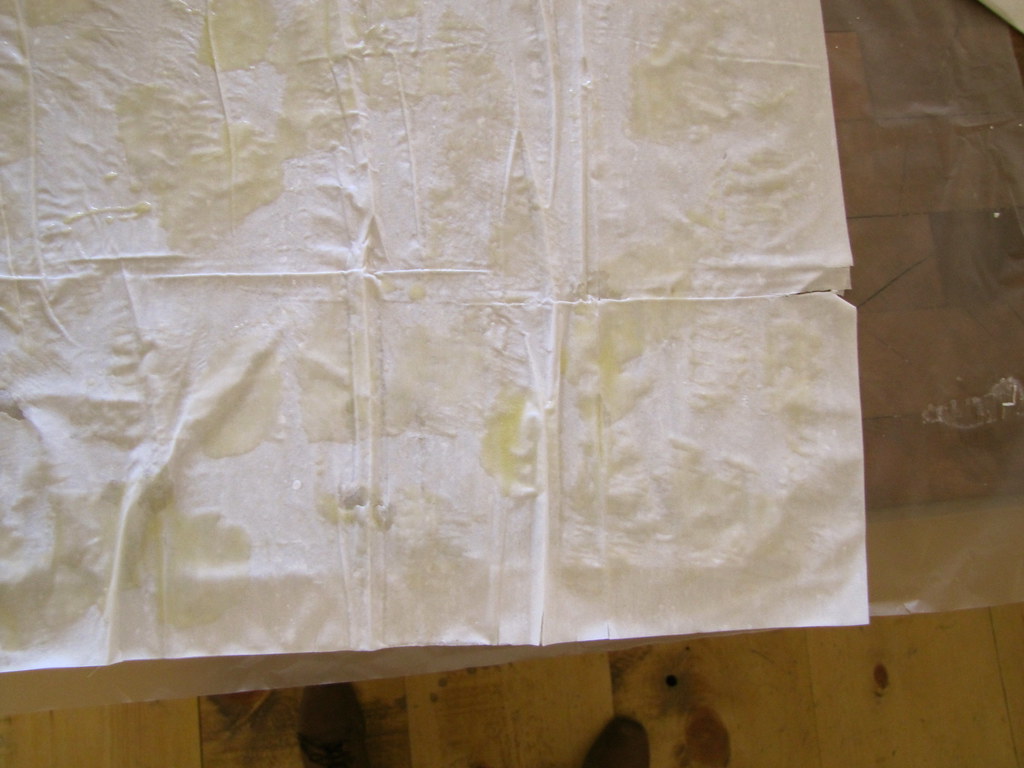 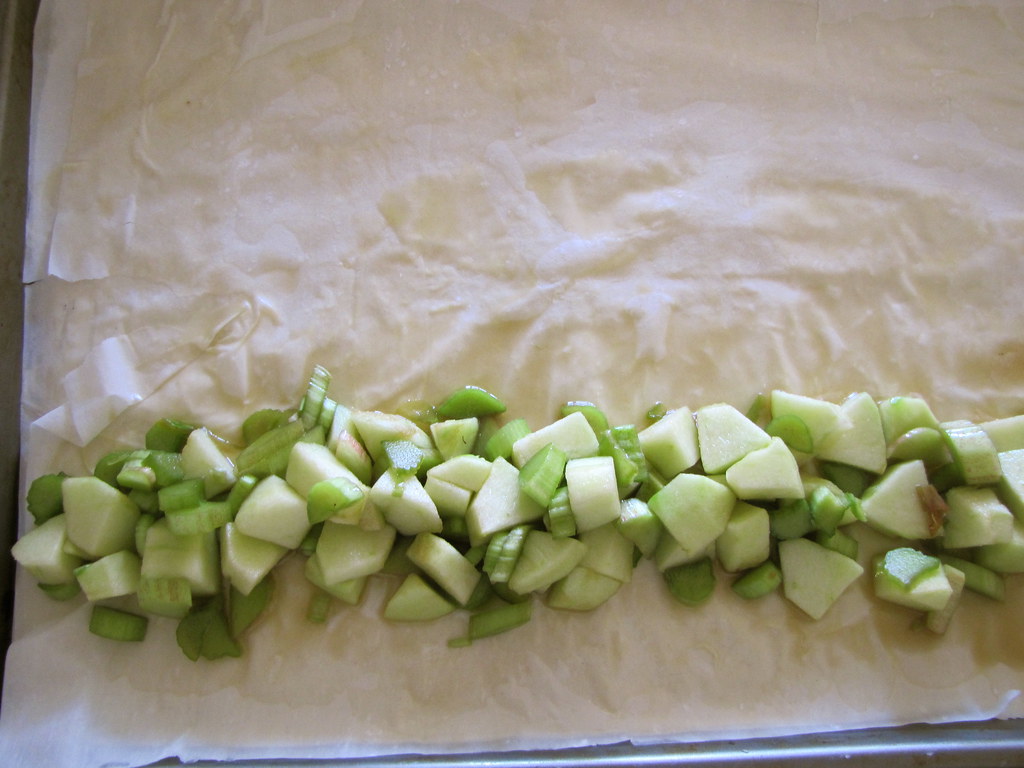 lining the edge with filling

Now for the fun stuff: I used slightly more rhubarb than apples in this filling mixture, although I was aiming for 50/50. Granny smith, chopped to small cubes, and crisp, finely chopped stalks of rhubarb were coated well in brown sugar for the filling. The rhubarb lends so much natural tartness that no lemon juice was needed. And to taste it even more, I didn’t add any spices, either.

They might seem fibrous, but rhubarbs melt down to a silky-smooth and thick sauce when cooked. I like how they’re not too runny with juices, like berries, too. Combined with apples, which also softened and lent a slightly banana-like sweetness, the filling stayed right where it was supposed to be while the strudel baked. (Except for one little tear, where it oozed out.) 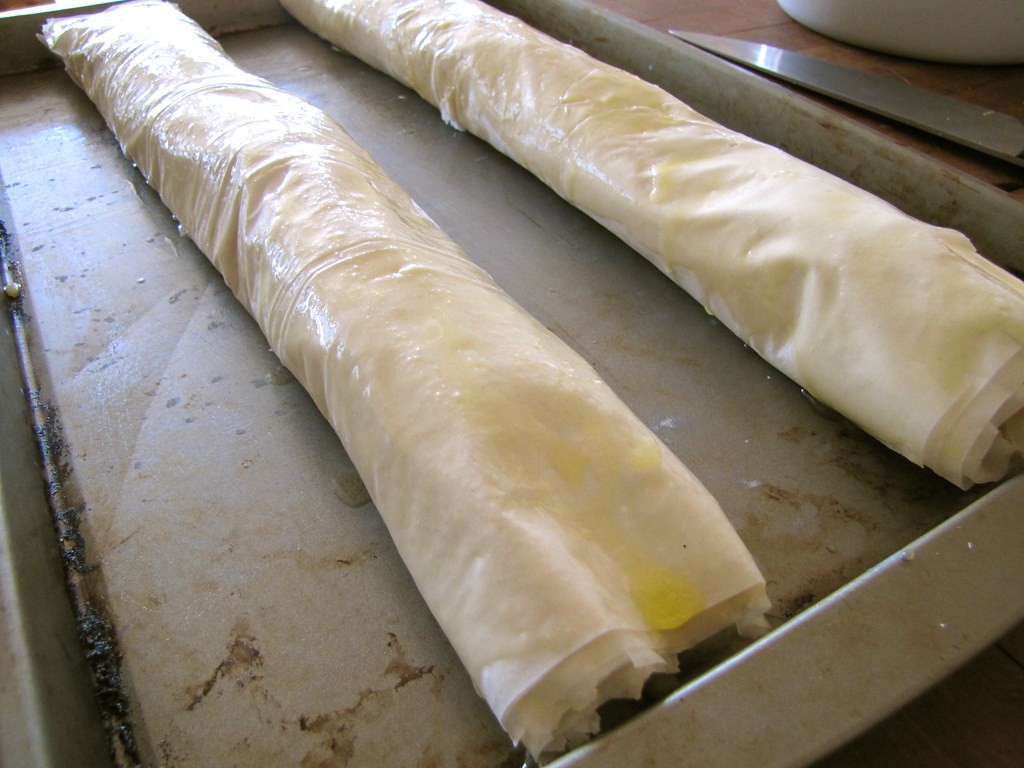 rolled up, brushed with more butter, and ready to bake 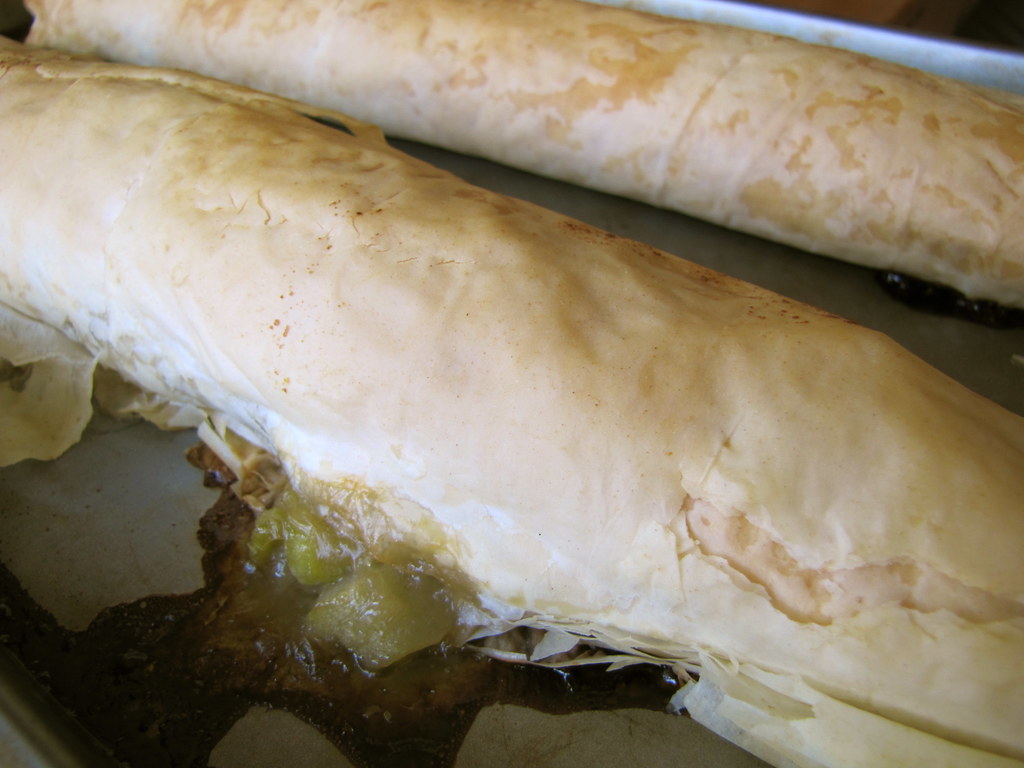 This was easier than pie to make. Cut into generous pieces after resting a while, the hot, fruity filling was refreshingly tangy and sweet. It was also a noticeable shade of spring green, thanks to the rhubarb. A sprinkle of cinnamon on top gives the just-baked crust a little flourish, or you could dust it with powdered sugar more in keeping with tradition instead. It’s not your average apple strudel, in any case.

Preheat oven to 350 degrees. In a bowl, combine the chopped apples and rhubarbs with the sugar.

Line your work surface with parchment paper or a clean towel. Place three sheets of the phyllo dough on top and brush surface with the melted butter. Place another three sheets on top and brush with butter. Repeat until there are 15 sheets of paper, with brushed butter in between every three. Arrange half of the filling along one side of the sheets, about an inch from the edge. Carefully roll up the strudel. Repeat for the second strudel. Brush both tops with remaining butter. Bake for 35-40 minutes, or until tops are golden brown. Remove from heat, Let cool at least ten minutes before cutting to serve.

Cost Calculator
(for about 12 servings)

Six brownie points: Sweet and satisfyingly buttery, this fresh fruit-based dessert is actually a healthier choice than many. The phyllo dough is brushed lightly with butter throughout, but has none of the weight of typical pie pastries and won’t fill you up with too many carbs after you’ve already had your meal. The filling may be sweetened with brown sugar, but rhubarbs alone are low in calories. Though they’re not a fruit, but a juicy stalk of a perennial plant, they’re rich in B-vitamins, Vitamin K, and Vitamin A (especially the more red-colored stalks).

Seven maple leaves: I’ve been eating local apples for what seems like a whole year — still around thanks to cold storage, they’re in the farmers’ markets now along with newer arrivals like rhubarb. And for baking, along with spreading any piece of bread thickly with too, I really prefer this stuff called “pasture butter” from Organic Valley, made from pastured cows’ milk. The taste is off-the-charts good, and it reminded me of the amazing “Alpenbutter” that I’d become addicted to in Germany, which was also made from grazed cows. It’s really expensive, but there’s no going back to other butters for me. The nice yellow color (thanks to all the beta-carotene in the grass) of the butter also makes everything look nice.