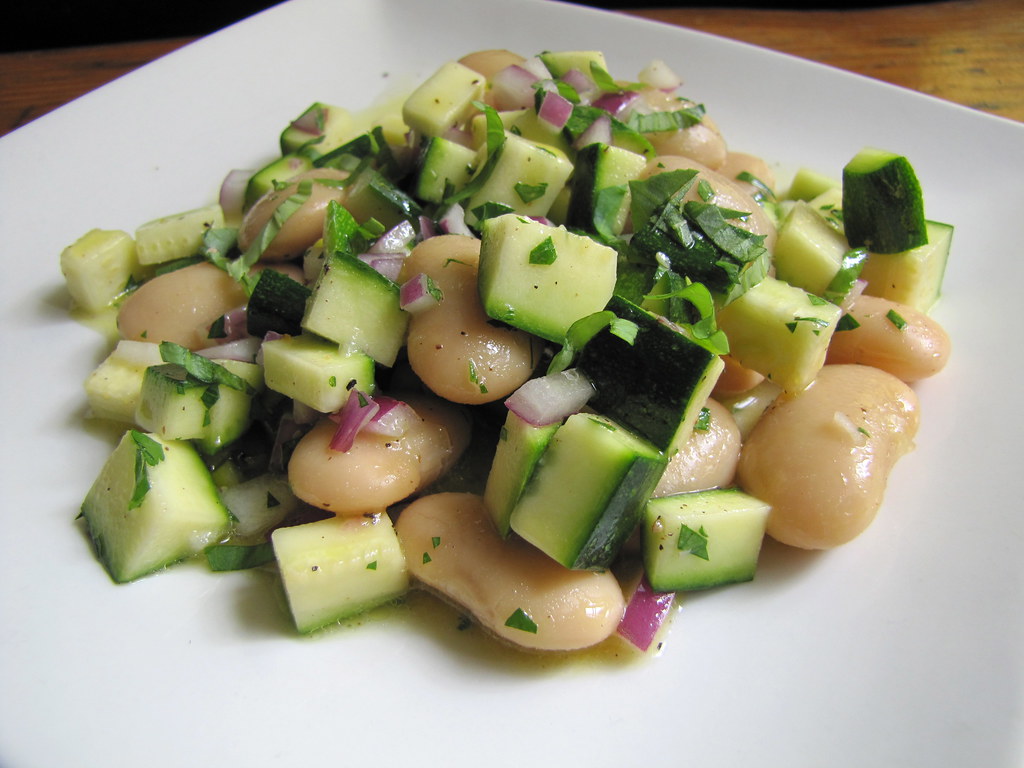 What a delight to find zucchini so early in the season at the Greenmarket last weekend. There was just one small crate of them at Grand Army Plaza early in the morning, and I snagged two ripe ones with shiny, lizard-green skins that appeared to be stretched across their juicy flesh like balloons. With such prime, squeaky-fresh zucchini like this, I don’t even want to cook them. I just want to slip a knife through them, and toss the lime custard-colored pieces with some olive oil and lemon juice.

Which is more or less what I did, with a shower of chopped parsley and red onion for bite. Then, to make this salad more substantial and elevate it to a light meal, perhaps, I tossed in some savory, white broad beans as well.

More substantial this salad did become. But even more so addictive, to the point where I was no longer having a light lunch based on my heavy portion. This is the kind of salad you’ll want to shovel into your mouth at once, trying to burst each delicate zucchini piece as you get it down. It’s not overwhelming enough in flavor to do so, and you want to experience again the trifecta of textures and tastes, from the soft, mealy beans to the crisp bits of onion. 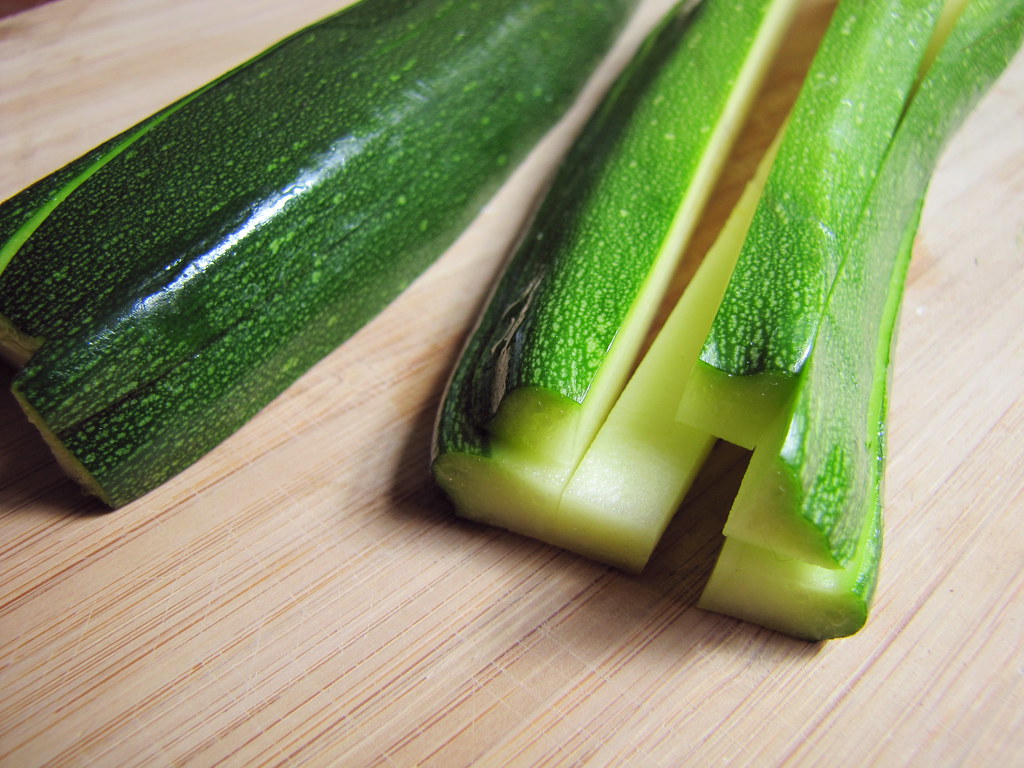 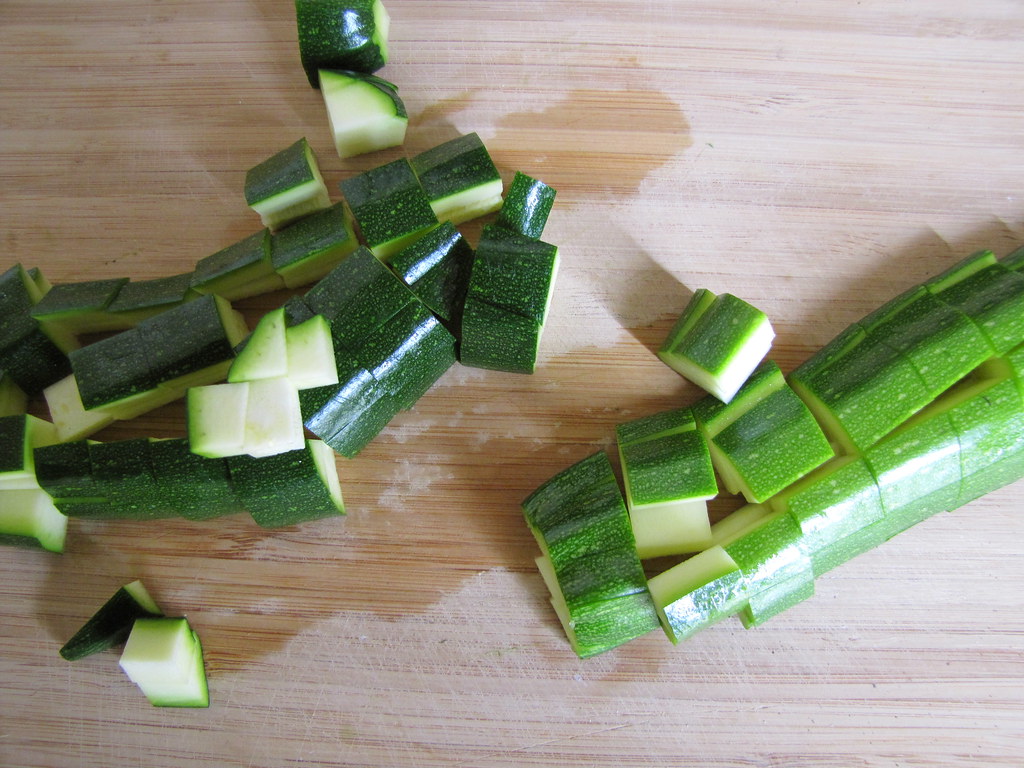 The only mar in the threesome was the (admittedly, foolish) use of canned beans rather than fresh or dried and soaked ones — or any type that simply doesn’t taste like a can. This was a last-minute ingredient decision, so there was simply no time to rehydrate big broad beans for the handful of hours that they’d need to become tender. Also called fava beans or butter beans, these kidney-shaped beans are flat, broad, and spring-green when they’re fresh, and ivory-colored once dried. They’ll have a tough outer skin that needs to be peeled in addition to shucking their pods off, should you find some fresh ones. I thought the substantial size of these beans would pair nicely with the zucchini and create a big, chunky appearance. But actually, you can use any type of beans — small, large, red or black — instead of them here. Just try to make the time to cook them instead of getting them from a can. 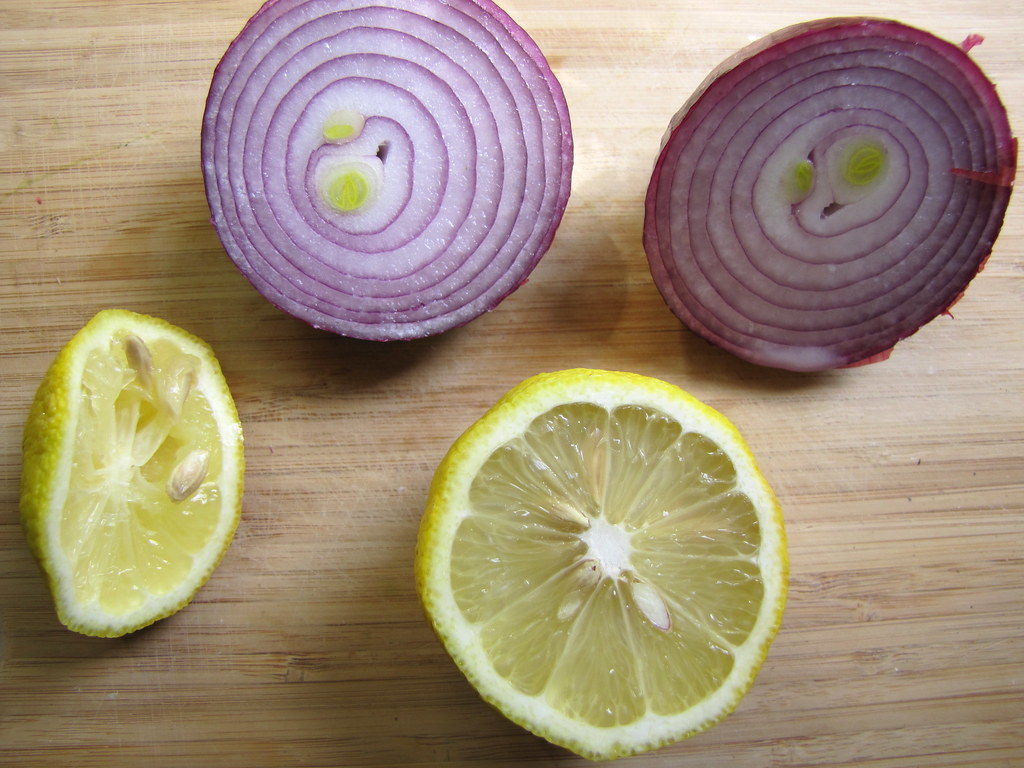 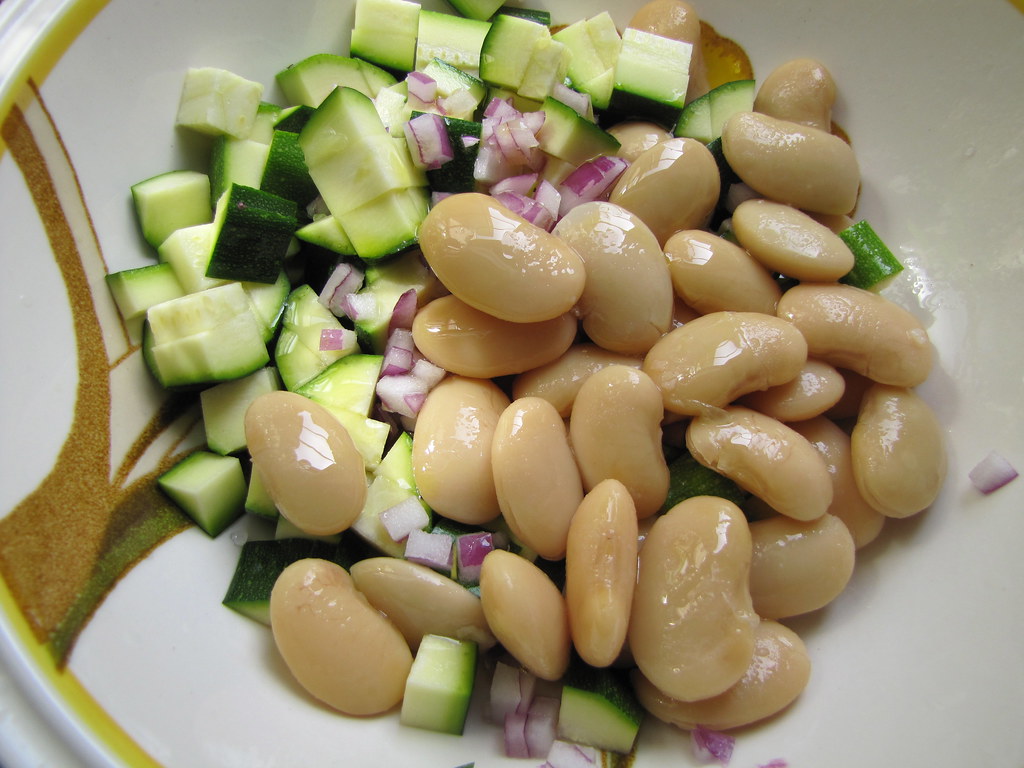 before a quick toss

This salad can benefit from a quick sit in its dressing of (your best) olive oil, fresh lemon juice, salt and pepper. It makes a great picnic side to bring along because of it. Just don’t let it soak more than a couple hours, as the zucchini will begin to lose its bite, and toss in the fresh herbs when it’s ready to enjoy to maintain their fluffiness. I’ve added both parsley and basil to mine, just ’cause they were about; try mint, chives, or any fresh herb you like as well.

2 medium-sized zucchini, ends trimmed and chopped to 1/2″ pieces
1/2 red onion, finely chopped
8 oz. dried broad (or fava) beans, or any bean, soaked overnight and boiled until just tender (or substitute with a well-rinsed 15 oz. can of beans for time’s sake)
about 3 tablespoons extra-virgin olive oil
juice of half a lemon (or to taste)
salt and freshly ground black pepper to taste
1-2 tablespoons fresh parsley, basil and/or other fresh herbs, chopped

Combine the zucchini, onion and beans in a large bowl. Add the olive oil and lemon juice and salt and pepper to taste. Serve immediately or keep chilled, covered, for up to 2 hours. Garnish with the fresh herbs.

Three brownie points: Don’t be fooled by their pale flesh and mild taste; zucchini are no slackers in nutrients. Lots of Vitamin C in these green fruits, along with potassium, fiber, folate, and Vitamin A for a very little amount of calories. Broad beans add even more fiber and folate along with healthy, plant-based protein, and will help fill you up. If opting for the canned kind, try to get a low-sodium one and rinse them out well to try to rid all that extra sodium (and that canny taste).

Six maple leaves: We’re almost there! With the zucchini just in season from at least one local farm (Phillips) at the Greenmarket, we’re headed around the bend to summer produce. Also found locally were the spring onion bunch I managed to swipe my red onion from, and newly transplanted seedlings of herbs. Not so low-footprint were the lemon and olive oil, which must come from afar; the can of beans might have too for all I know, but at least the crop can be found locally, too.