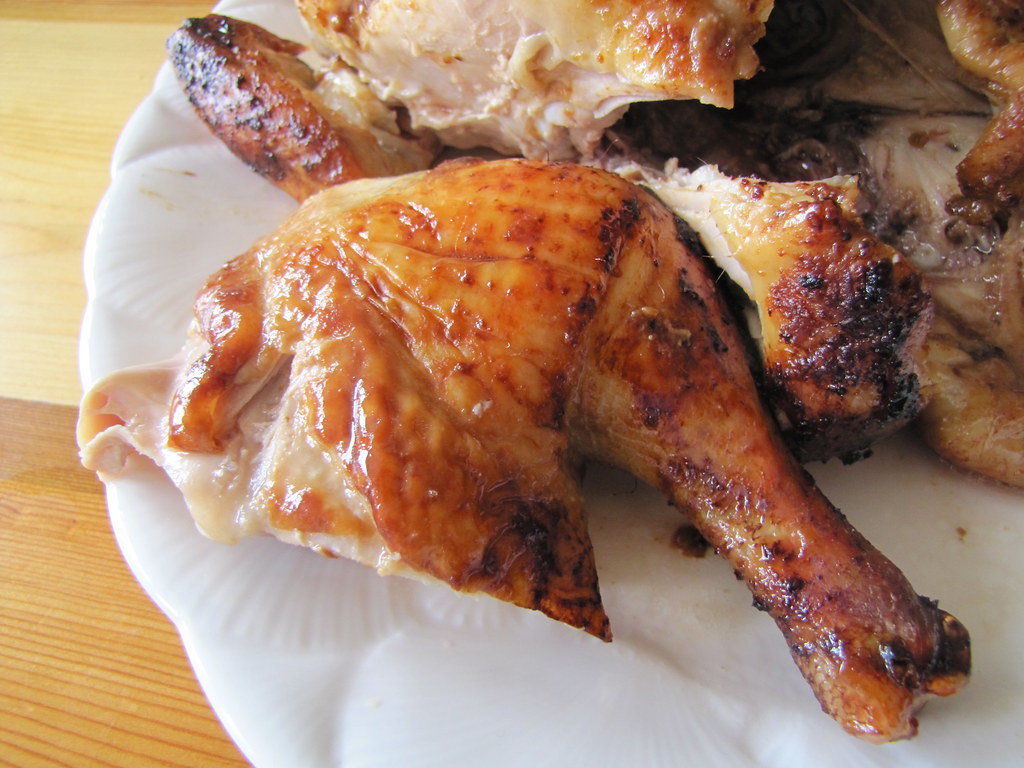 I was enjoying the crisped bits of skin on a perfectly roasted chicken one day when it struck me: the salty, roasty, umami-rich flavor was almost like red miso. Why not try using this as a marinade next time? It was an a-ha moment that went all too well, the first time around. I can’t wait to experiment with it some more.


Especially now that I’ve got new potted plants on the windowsill, including the Japanese herb shiso. But for now, the simple roast chicken with miso marinade had enough oomph to transform a weeknight meal into a special occasion.

Was it cheating, achieving that same apex of savory flavor not by virtue of chicken alone, but from a friendly, fermented soy paste? I thought I’d give it a try and see how much impact the addition would make before making a determination. I’m aware that when miso paste burns, it develops an off-taste, which is why we shouldn’t smear it on a steak before placing it on a griddle. But the convection heat of a relatively low-set oven sounded like a good way to see how well it would take to chicken. There would be no direct contact with heat, and I’d roast the chicken slowly, which would help seal in its juices anyway. I figured the crispness of the skin could be achieved over the time alone, and with the help of the miso marinade, combined with butter. 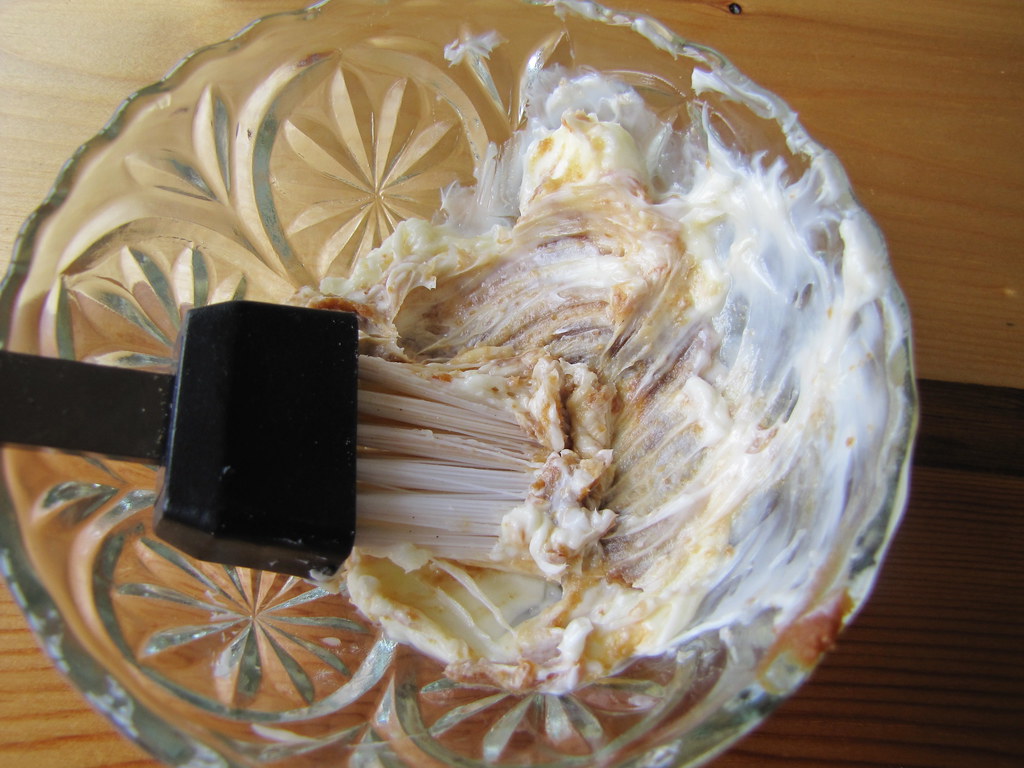 butter and red miso is brushed on the chicken 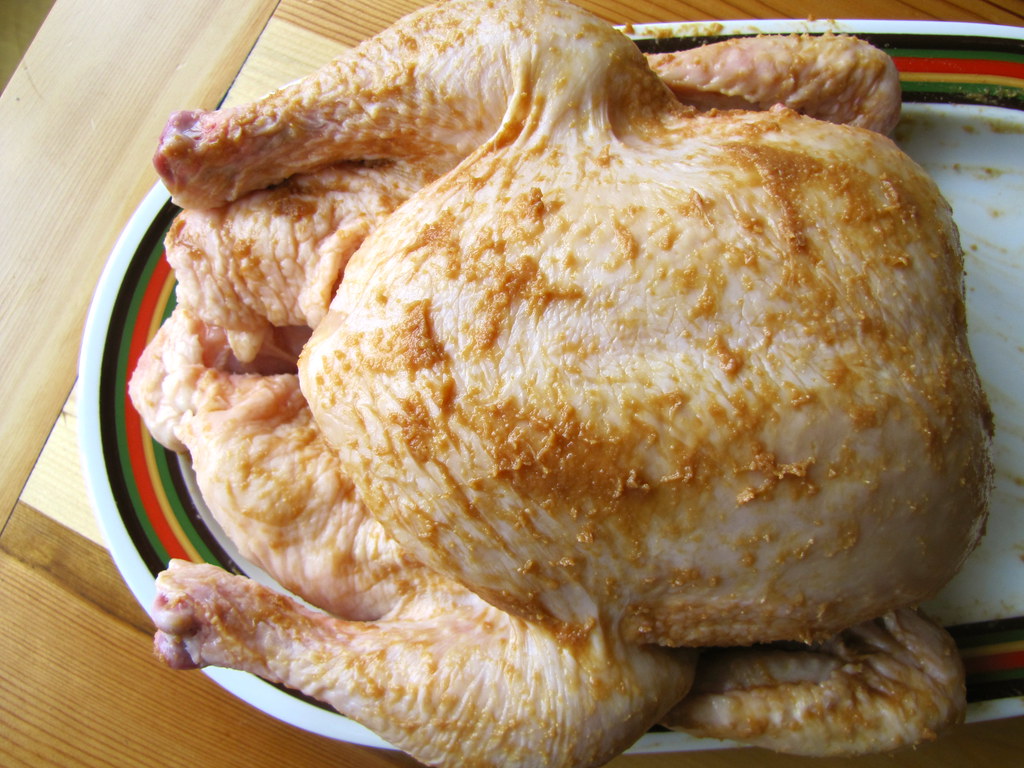 before roasting, and for basting as it cooks

A whole chicken needs the help of a little extra fats to gloss its surface with, so that its skin turns a beautiful deep brown. Butter is the classic American solution, although wet marinades based on oil or just drippings from the bird as it cooks work as well. I let the whole, raw chicken sit with a coat of just red miso paste for an hour before roasting it, to let the flavor seep in a little bit. Then, I added some butter before sticking it in the oven.

You’ll want to go through the usual steps of rinsing, patting dry, and preparing the chicken for the oven as you would for any seasoning, remembering to smear it inside the cavity as well as the surface. Tuck the wings back, too, by inverting the wingtips into a painful-looking yoga position so that they won’t burn. You can also truss the drumstick tips with kitchen twine, especially if you’ve stuffed the bird, but I let them hang loose this time. 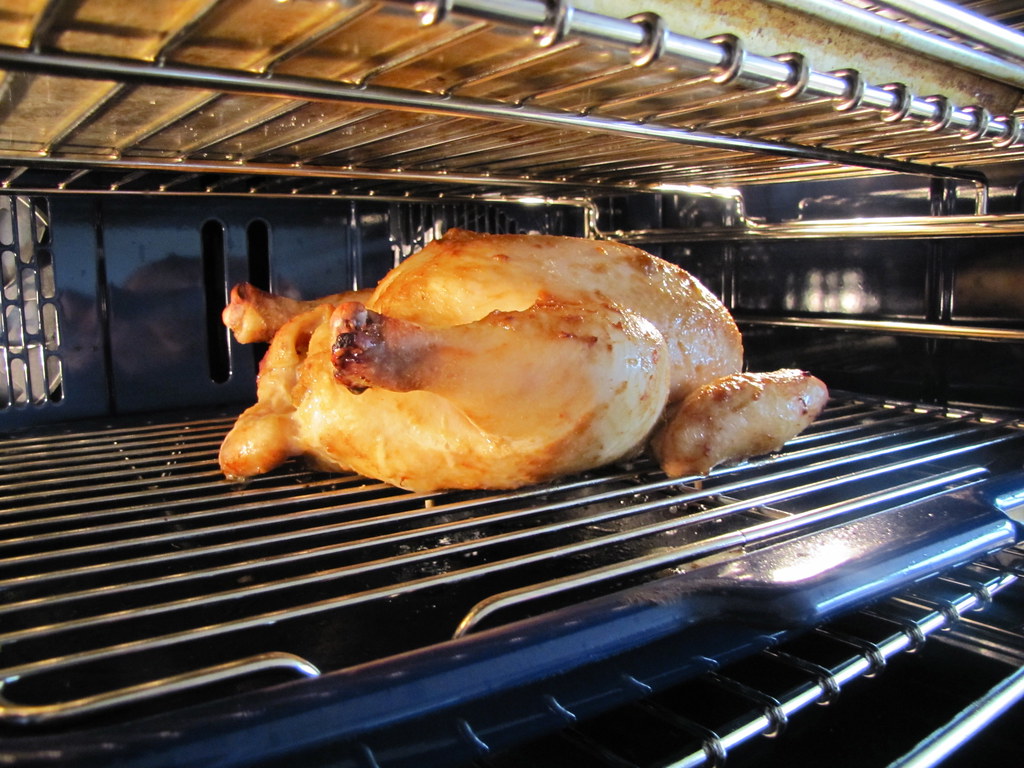 the well-brushed bird roasts away

My 4-pound chicken needed about 45 minutes to roast until the juices ran clear when poked at the thigh. This may be a little skewed, though, considering all the times I opened the oven to baste the chicken with more miso-butter marinade. I kept a careful watch for burning, and the drippings that fell to the tray beneath the chicken created a lot of smoke thanks to the miso; I quickly corrected the situation by placing the roasting potatoes also in the oven directly below the chicken to absorb the grease instead.

The skin eventually became crispy but not too burnt, and a delicious aroma filled the kitchen. After letting the bird sit, in all its reddish glory, for about ten minutes, it was carved up and enjoyed by a small group. The wings and legs, where the miso soaked in the most thanks to their crevices, were the best part. If only the stuff didn’t burn and smoke so much in the drippings, a red miso-based gravy might have been made.

Rinse and pat chicken dry with paper towels. Smear 1-2 tablespoons of miso paste over the surface and inside the cavity of the chicken. Let sit at room temperature for 45 minutes to 1 hour.

Preheat oven to 350 degrees. Soften or melt the butter and gently spread about 2 tablespoons over the surface of the chicken. Set on a roasting rack, and place in the oven. Meanwhile, combine the remaining butter and miso paste. Baste chicken with the mixture with a brush every 15 minutes or so. Test chicken for doneness by inserting a toothpick into the thigh; if juices run clear, the chicken is fully cooked. Remove and let sit for at least 10 minutes before carving to serve.

Six brownie points: It’s not a complete meal, only the meaty main course, so surround this one with lots of vegetables on the plate. You’ll want to eat a lot of tasty skin with this one, but if you stick with a modest amount of breast meat, the leaner your meal will be. Although miso is a good source of protein it’s high in sodium, which is why salt isn’t used at all here. It’s really used for extra flavoring here, instead of as a healthy substitute for rich stocks and soup.

Seven brownie points: Of the three ingredients, two of them were locally sourced — the chicken and butter — while the red miso was imported. And eating meat once in a while won’t kill the planet, but it’s best to make sure those animals were produced with care and safety for the best possible effect on the environment — and its taste.