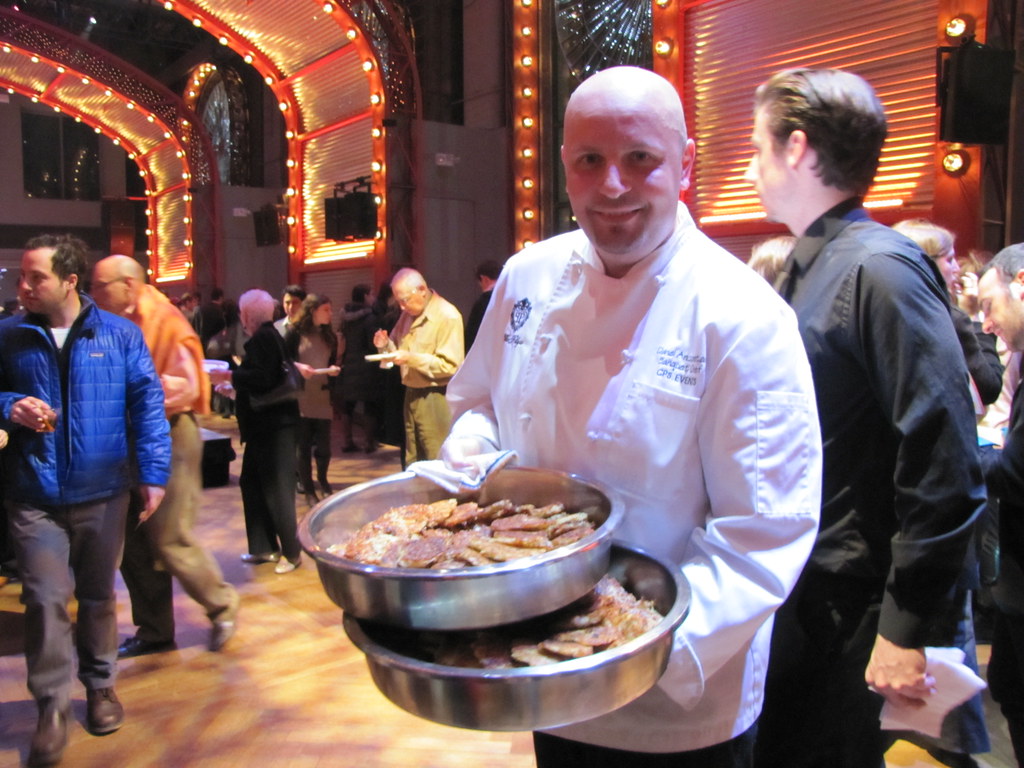 If there’s one thing I love, it’s seeing an entire community of chefs, food writers, and the ecstatic eating public go bonkers over one single dish. Last night at the Brooklyn Academy of Music (BAM), it was latkes. And it was a madhouse. I’ve finally recovered enough from serving as one of nine judges in the Third Annual Latke Festival sponsored by Edible Brooklyn and Great Performances to post a recap, along with a coveted recipe by one of the night’s top winning contestants.


Latkes, the crispy, browned potato and onion pancakes beloved on Hanukkah, are widely adaptable to both toppings and pancake mixtures, it turns out. It’s also something that seems to inspire deep, somewhat spiritual, comfort, as well as fiery opinion as to how they are best made. (To echo co-judge Rachel Wharton’s question to the audience, how many swear by grating or shredding the potatoes?) As a non-Jew growing up in a heavily Jewish part of New Jersey, I didn’t eat latkes at home. But thanks to my childhood friends and neighbors — particularly Julie Stein’s family, who let me join their Passover seders — I got to eat plenty of latkes, matzoh ball soups, and gefilte fish anyway, the latter of which I actually enjoyed, contrary to my young friends. 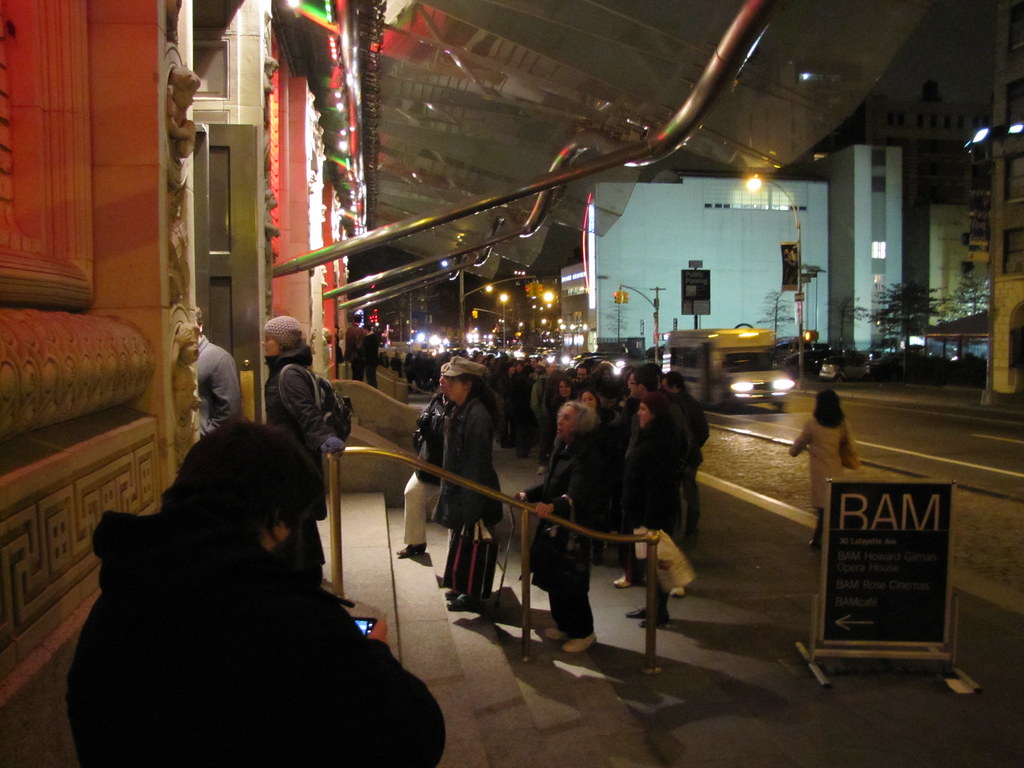 the line wrapped around to Flatbush Avenue outside of BAM 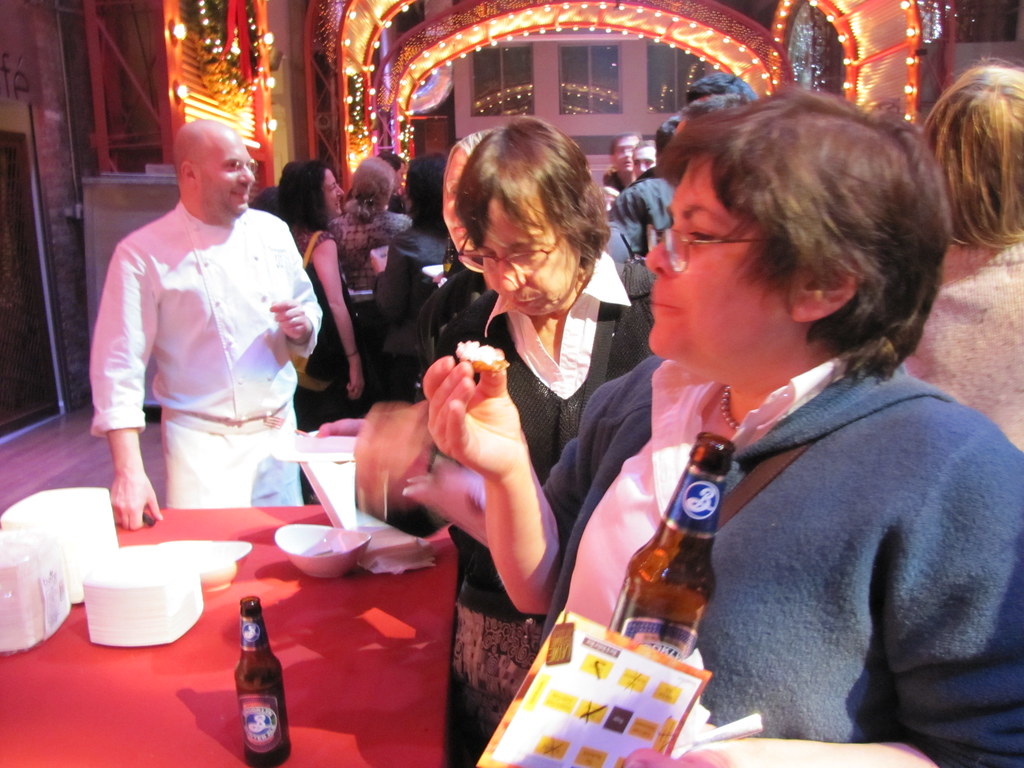 once inside, tasters eagerly dig in 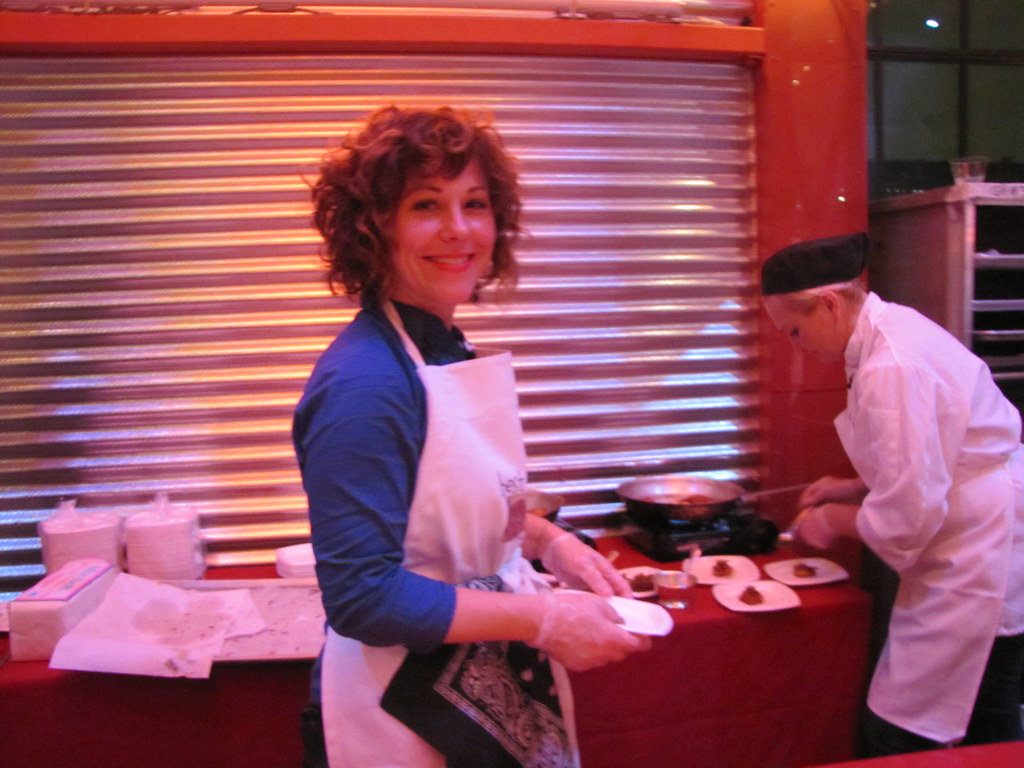 The latkes made by 16 chefs at BAM last night were certainly not my childhood neighbor’s potato pancakes, though. They’re my new friends and neighbors’! A standout of the night was a perfectly textured cake topped with five-spice duck confit by Dori Fern, who took the first prize in Edible Brooklyn’s latke recipe contest earlier this month. Joined by her son, the home cook served up an entry that was every bit as impressive as the restaurants’ offerings alongside. 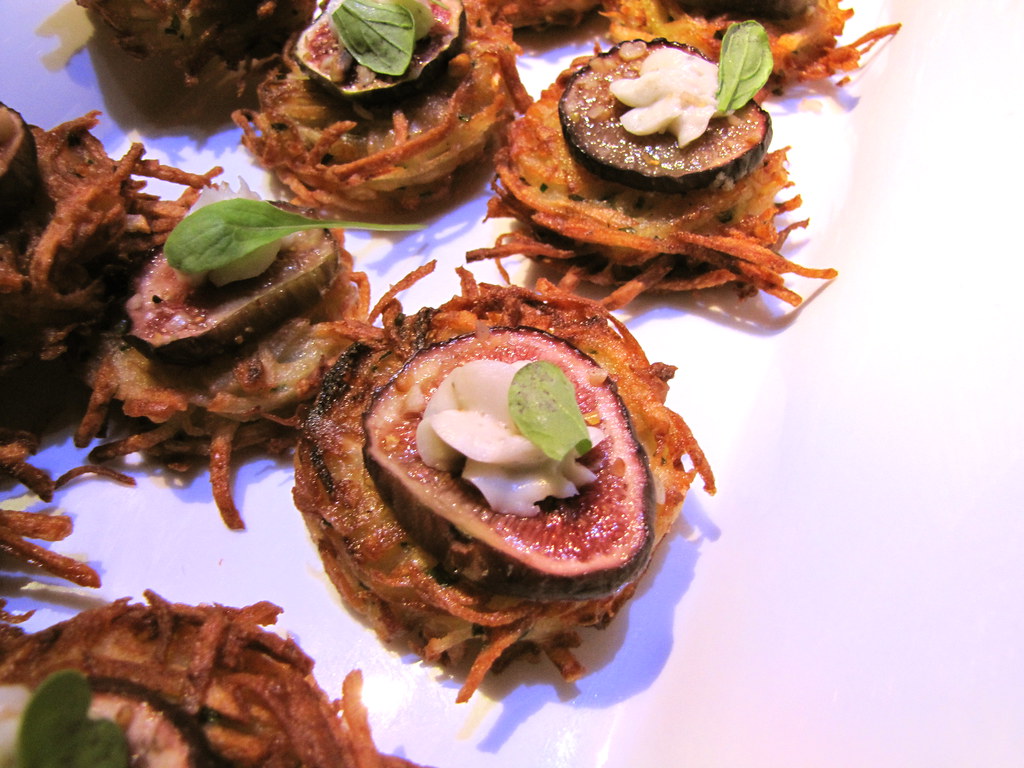 one of five latke iterations by BAMCafe 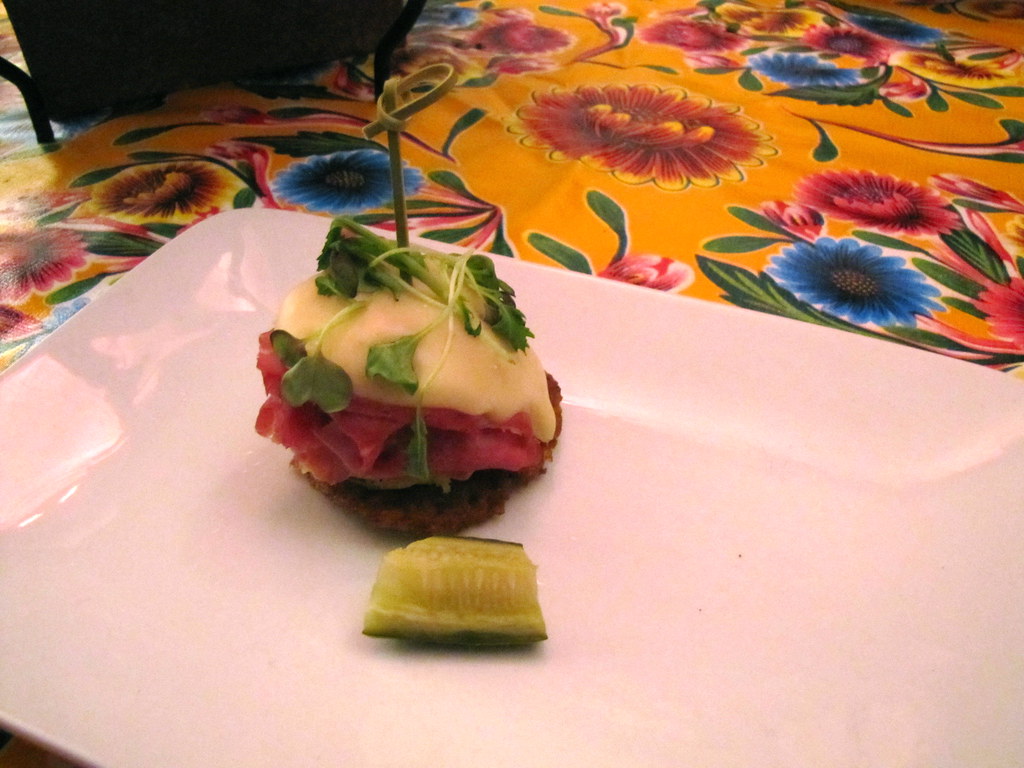 It was nearly impossible to choose whose latke was the best. Nobody did the same thing, and all were delicious. Many restaurants made two different takes on the cakes, and one restaurant, BAM’s own Cafe, made five. I savored The Vanderbilt‘s braised oxtail and pickled pepper-topped sweet potato cake and their inventive way of stuffing aged cheddar inside a would-be traditional potato one; Mile End‘s reliably delectable charcuterie championed a schmaltz-fried cake with duck pastrami, duck cracklings and tart applesauce; and I wanted eat the umami-rich maitake and chanterelle mushrooms off of all of Kutsher‘s perfectly schmaltzy potato cakes with herbed ricotta topping. 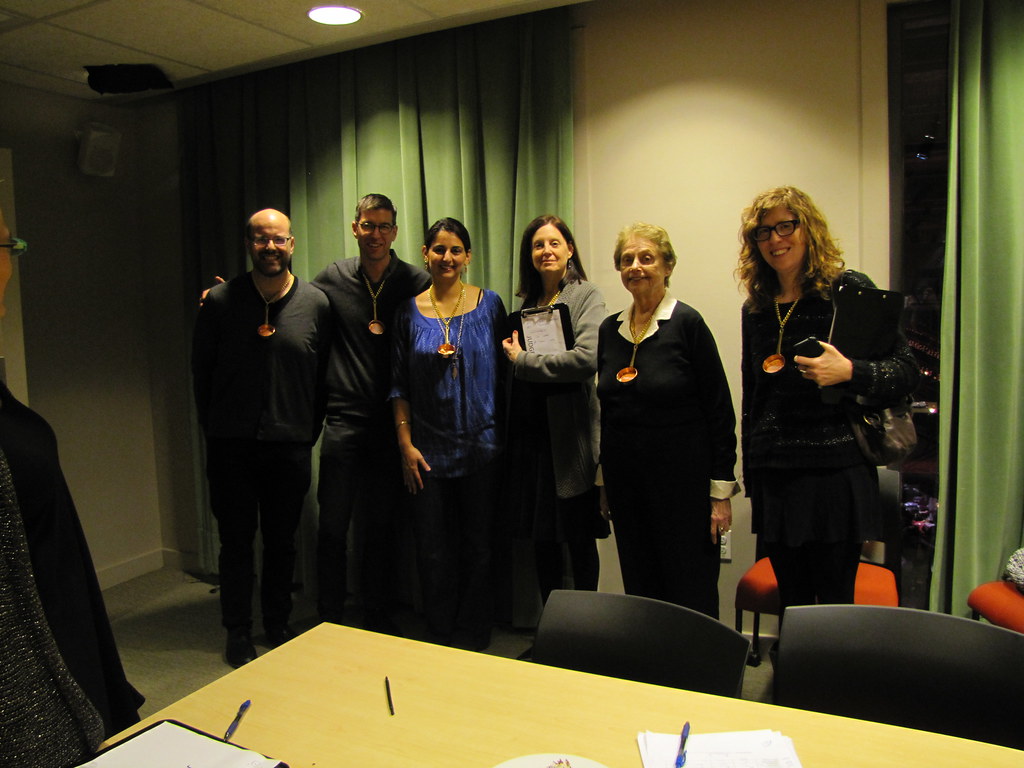 But in the end, the judges’ tastebuds collectively hovered around three favorites: Telepan‘s inventive celery root and potato latkes with a tangy and luscious green apple sour cream; Great Performances‘ hilarious duo of “The 99%” latke with a mini hot dog, and “The 1%” latke with a quail egg and caviar; and Almond‘s excellent latke topped generously with house-smoked bluefish that one of its sous chefs recently caught on Long Island. Those were the judges’ third, second, and first-place picks, respectively. 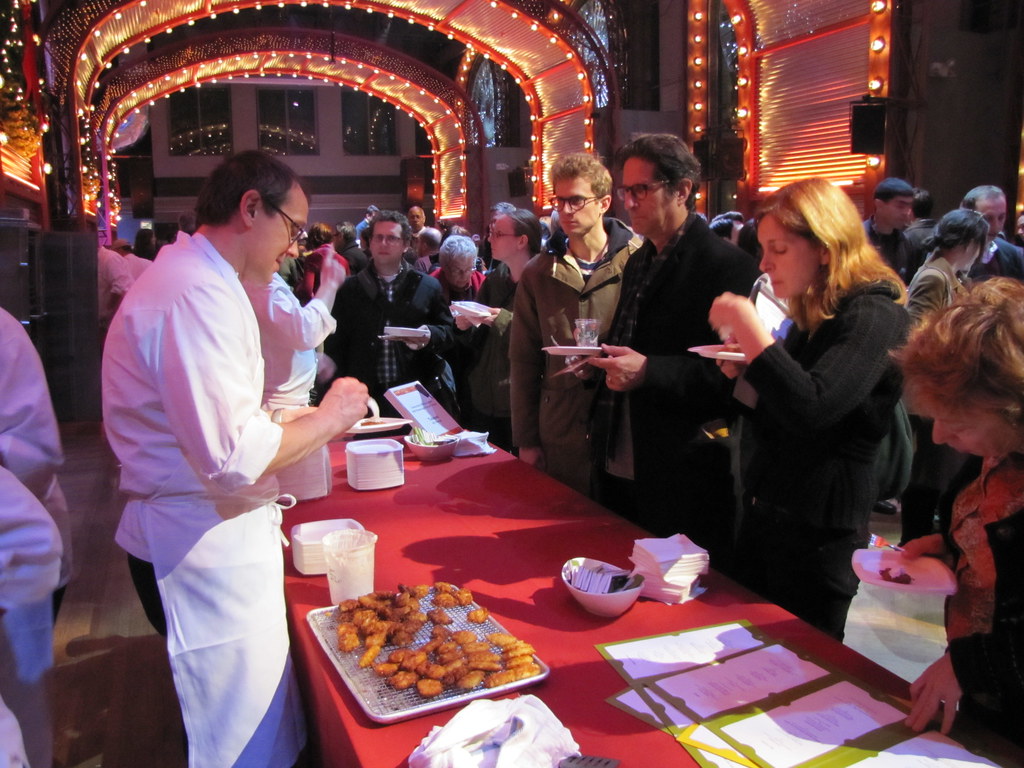 The latke-loving audience got to vote, too. Once the ballots were counted, the favorite latke of the populace turned out to be third place-winning Telepan’s.

I have never eaten at Telepan but if someone asks me out there, I would not say no! From the many frenzied food festivals and benefits that I’ve haunted, I’ve enjoyed seeing this restaurant almost always show up to represent, with one of the best darn things in the room. So I was thrilled when its friendly chef/owner Bill Telepan agreed to share his celery root and potato pancake recipe for this post. Equal parts shredded celeriac (celery root) and potato, this is just what the more adventurous latke-maker was looking for, yet its taste is subtle enough to please the most die-hard latke purist. Enjoy — but there’s just one catch: Bill didn’t include a recipe for his green apple sour cream topping, saving that as a chef’s secret. Let your own latke imagination run with that one!

Beat the eggs and add them to the reserved starch and combine well. Add the flour and salt and combine with the shredded vegetables. Form into cakes and pan-fry in a saute pan in a generous amount of vegetable oil.