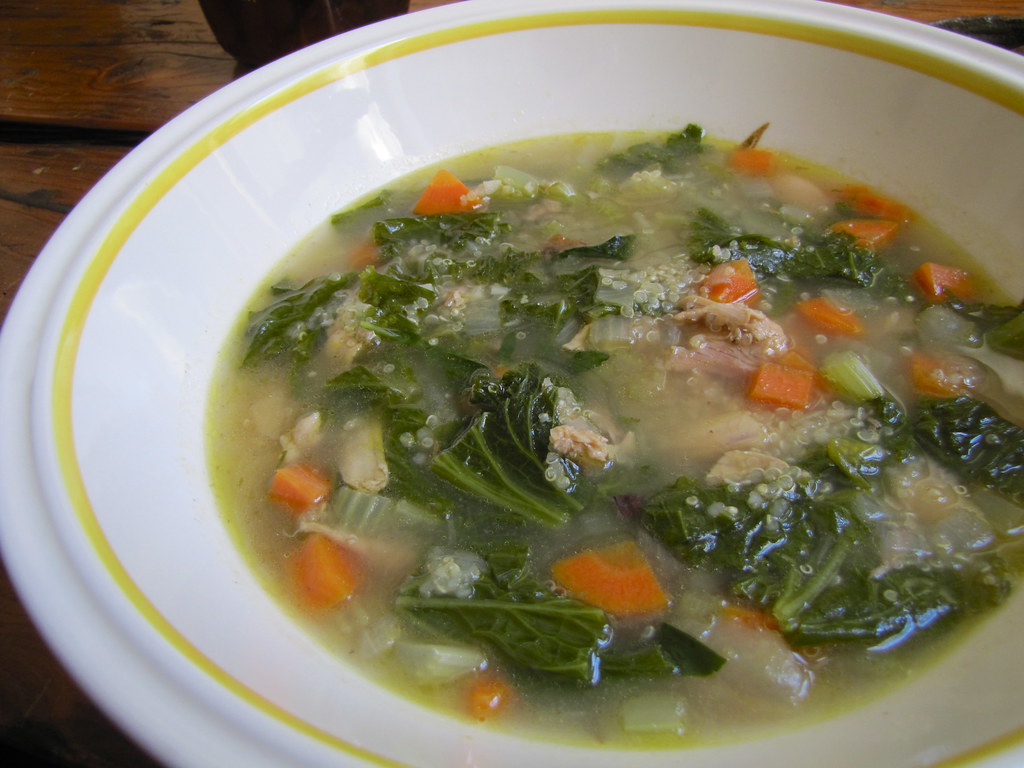 I hope everyone saved their turkey bones from the Thanksgiving feast! (Oh yeah, and hope you had a nice Thanksgiving, too.) The roasted, crusty carcass is prime stuff for making stock with, and a bubbling pot of it going on the stove is a treasured pasttime for the day after for me (or day after-day after). As far as aftermaths of major holidays go, the post-Thanksgiving weekend is a relatively healthy, relaxing one (so long as you get pepper-sprayed at a shopping mall…). After packing in so many potatoes and rich pies, you don’t really want to load up on more carbs, or eat the same straight a few days. A leftover turkey soup, filled with copious greens, is a simple way to go.

This is a very straightforward soup for any occasion, really; if you’re looking for a slightly different twist on the average chicken or turkey vegetable soup with noodles or rice, here it is. A great bunch of mustard greens cooked down into slippery, noodle-like strands in it, as well as some stray arugula from a household plant. As sharply spicy as these greens taste raw, they mellow out considerably — and shrink to a fraction of their size — in the soup, lending it a faint flavor, but not much. 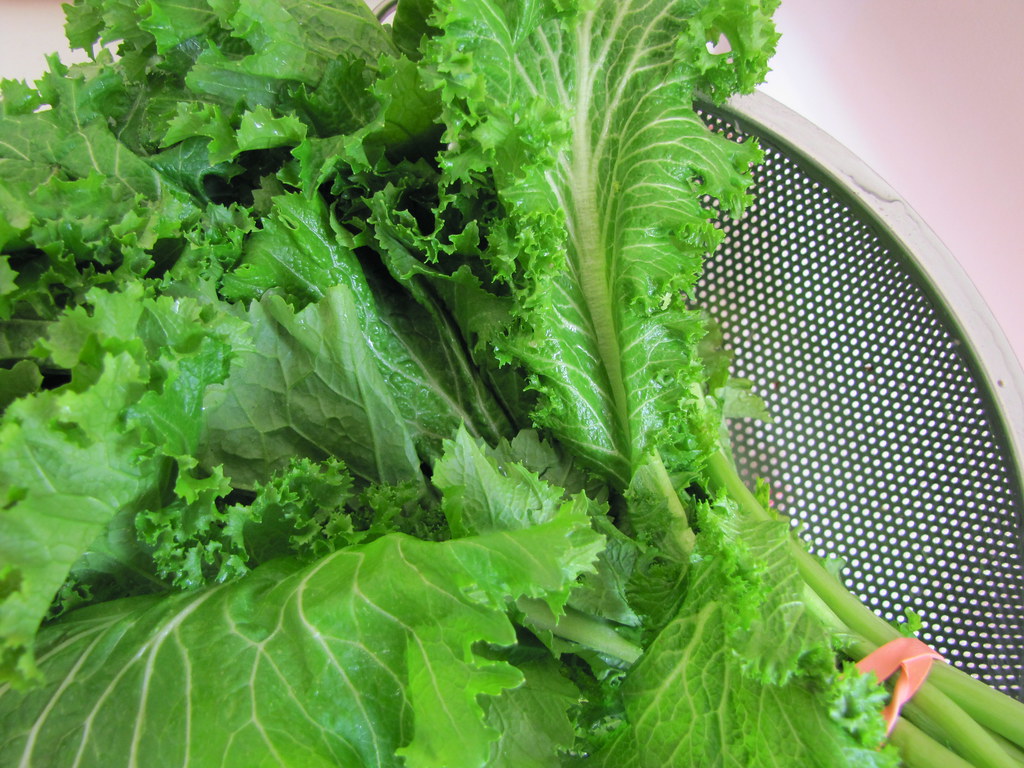 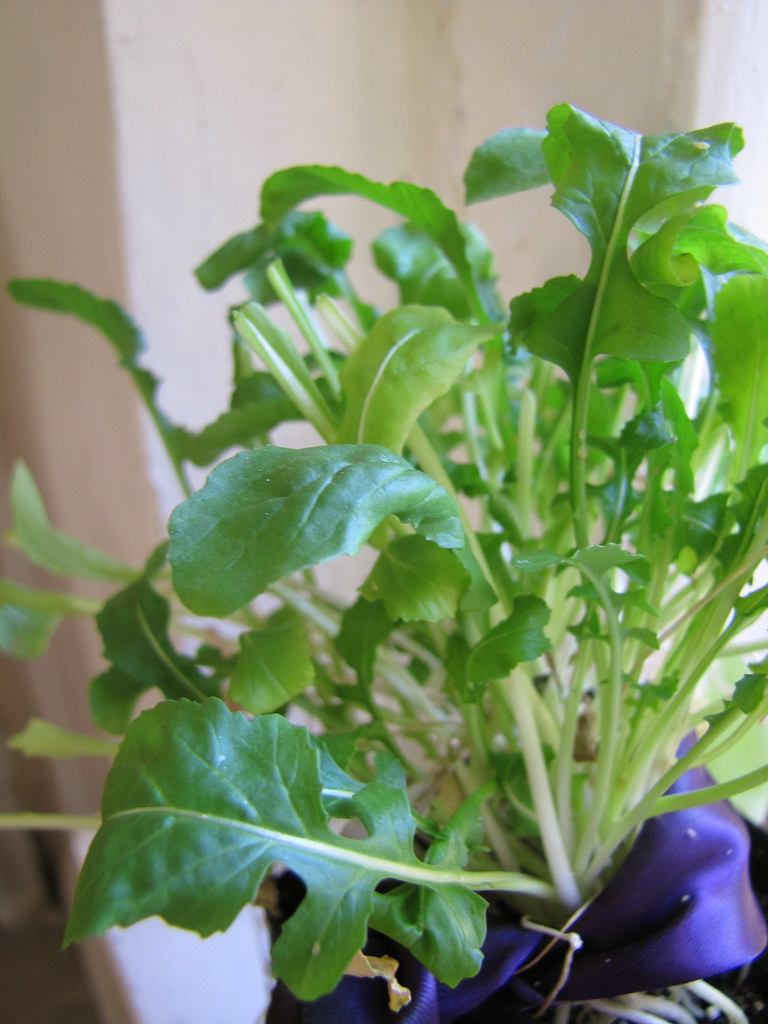 The big benefit of slurping up so much of these greens are that they’re powerhouse detoxifiers. So when looking to cleanse after what might have been your annual tradition of meeting up with high school friends at the hometown bar, you can look forward to this. Have leftover braised kale or other greens on hand? Slip them into the soup instead at the end. If you had a big turkey, be sure to keep reserves of the delicious stock to make this — or other soups, risottos and stews throughout the winter — with. 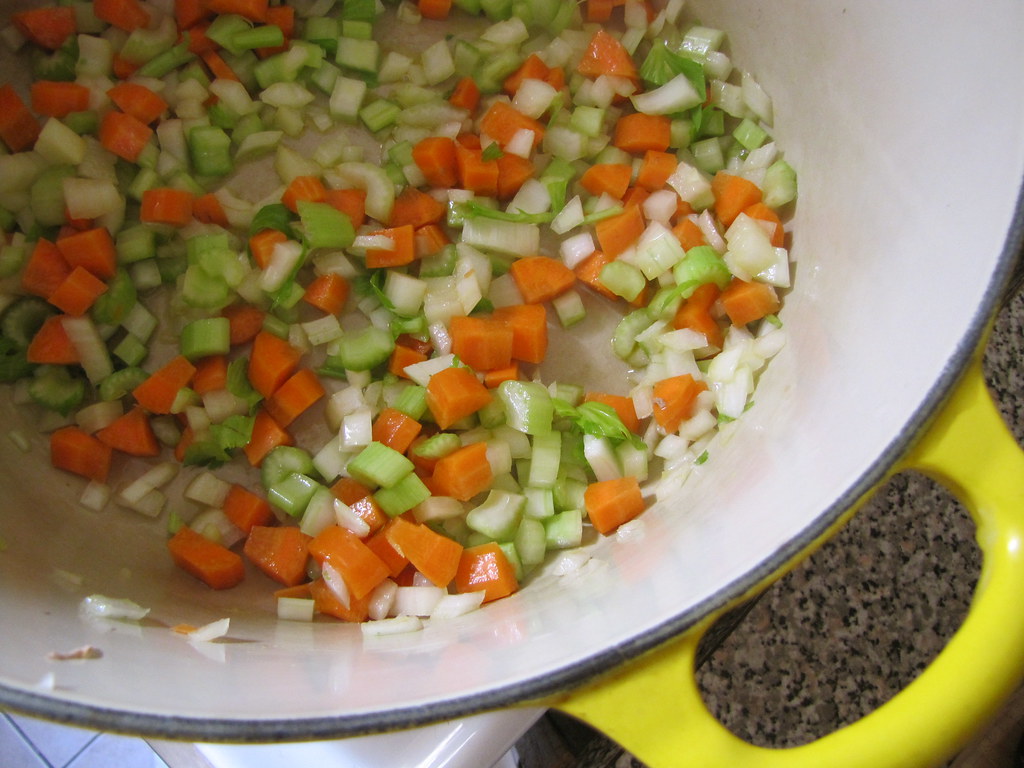 a sweating mirepoix, the first step

I’m thankful this year that many tireless farmers are raising heritage turkey breeds for principal. I got my turkey from Heritage Foods USA, the independent distributor that also produces my radio network. The turkey came to my parent’s door in New Jersey on Tuesday, along with an instructional booklet and brochure. I’d warned my parents that heritage turkeys will look quite different from the familiar, shrink-wrapped bird: much leaner, darker, and with longer legs. They still gasped at what was in the package, which they equated with looking like an “ostrich,” although I doubt they’d ever seen a whole, butchered one of those, either. But once the turkey was out of the oven, no one could complain. The taste, unbrined and just basted in its own juices, was exceptional, and there was surprisingly plenty of breast meat to go around. 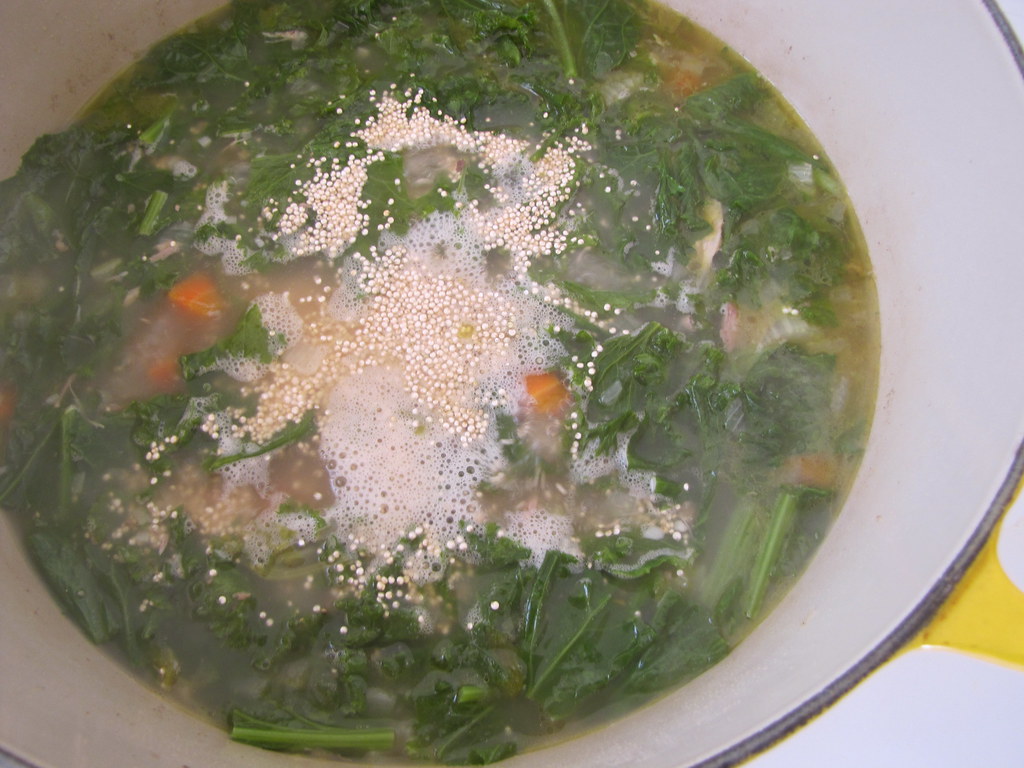 adding the quinoa toward the end

Another uncommon addition to this soup is quinoa. Unlike hardier grains, like chewy barley or rice, quinoa can be forgotten about and dropped in at the last five minutes of cooking. When dry, quinoa resembles tiny millet seeds, or couscous. But they puff out into fluffy rings when cooked, absorb all the flavors of the soup, and often float to the top.

Quinoa also adds a low dose of carbs with a shocking portion of protein and fiber to the soup. It’s easy to underestimate how much to add when pouring in the grains dry; it will look like only a tiny portion has been added, but after a few minutes and a stir, you’ll see them blossom in the broth. A really hands-off soup to cook after a big chore in the kitchen, if there ever was one.

Pick the meat from the turkey carcass and reserve. To make the stock, combine the turkey carcass with the vegetables and cover with water in a stockpot. Bring to a boil, reduce heat to a simmer and cook, uncovered at least 2 hours or up to 4, turning the carcass over once or twice in between.

In a large, heavy-bottomed pot or Dutch oven, heat the oil and add the onion, carrot and celery. Season with a generous pinch of salt and cook over medium heat, stirring occasionally, until onions are translucent, about 8 minutes. Add the garlic and cook, stirring occasionally, another 2 minutes. Add the bay leaves, picked-apart turkey meat, and the stock and bring to a boil. Reduce to a simmer and cook, covered, for 30 minutes to 1 hour. Add the mustard greens and arugula and stir in until wilted. Continue to cook, covered, for 30 minutes to 1 hour. Add the quinoa and cook for 5-10 minutes longer. Taste for seasoning, adding salt and pepper as desired.

Three brownie points: This soup is hearty-tasting, but light on your body. It’s full of proteins from both the turkey meat, quinoa and some of those greens, so it’s a filling meal-in-one. The greens are really a great way to pack in a lot of antioxidants like Vitamin C, as well as Vitamin K, and it will help unclog those arteries after one too many buttery desserts. The quinoa is an especially healthful, low-calorie grain, with protein and antioxidants as well as a host of other benefits along.

Eight maple leaves: It’s rare that you’ll find a meal that can feed 8-10 in one single bowl be all sourced locally, seasonally, and sustainably. But everything down to the garlic and onion — and especially the heritage turkey — can be found at small, family farms, except for the quinoa, which is a fairly rare and uncommon pantry grain. It’s worth it, if you ask me.