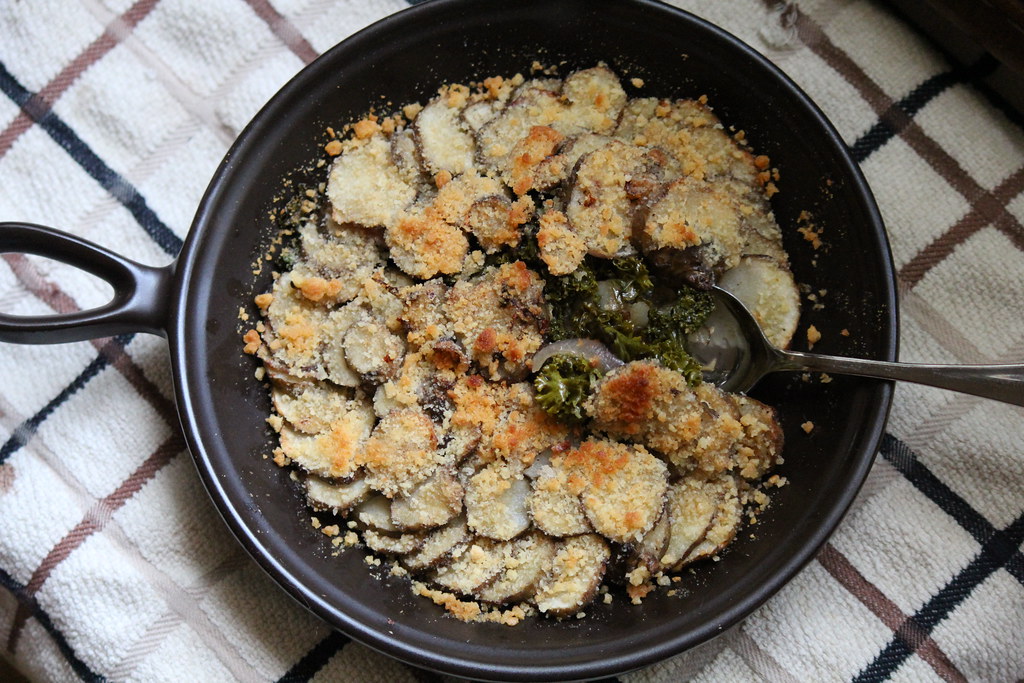 Imagine this gloriously textured mess with a runny fried egg plopped on top, and you’ve just accurately captured my breakfast. (Now try to picture the gluey streaks of yolk goo and breadcrumbs stuck to my cheek. No, don’t.) This dish was a tasty way to enjoy what seems like a more hearty, slow-cooking dish very fast. It’s not quite a casserole, and it’s not simply roasted vegetables. It’s a gratin.


To dispel a common myth, “gratin” does not imply cheese must be used. The word, which derives from “scrapings” or “gratings” often refers to just breadcrumbs, sprinkled on top of a dish. It’s one technique to spruce up simple food with that omnipresent ingredient of the Western world: stale, leftover bread. 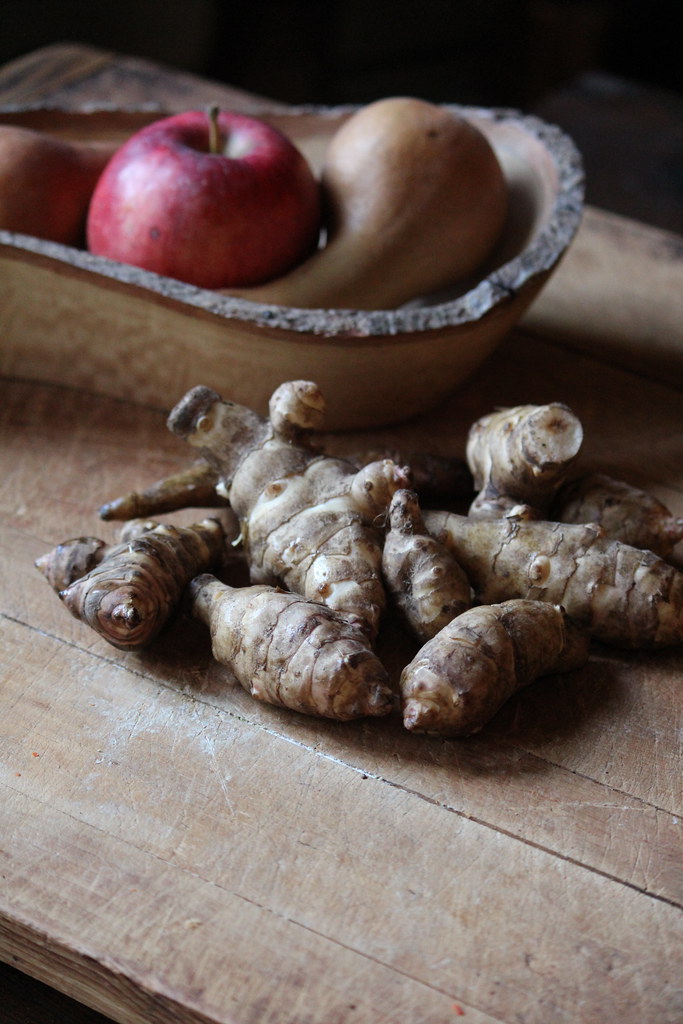 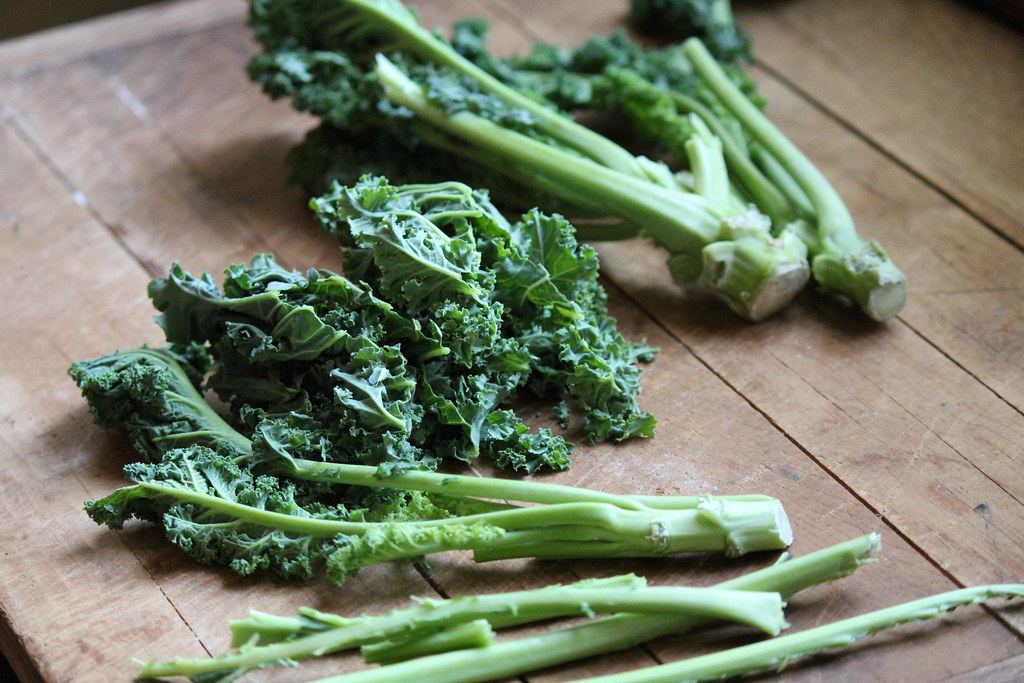 kale leaves are stripped from the stems

Now if that hasn’t turned you away from what you thought was a cheesy, oozy side, here’s another doozy — there’s no dairy in this recipe, either. I’m not a hater, but the sweet, nutty flavor of sunchokes is pretty great alone and doesn’t have to soak up all of that to cook. A generous coat of olive oil, salt, and pepper (a pinch of red pepper flakes if you like, too) will cook them to a flavorful tenderness in no time if you slice them up thinly. I know the surfaces of these things look a little weird and knobby, but they needn’t be peeled, either — the sunchoke’s skin is delightfully thin and easy on the palate (and the knobs would be pretty annoying to maneuver a peeler around).

A sprinkle of lemon juice on top of the crust just before serving is great, and I’ve added a few rings of red onion to the pile for a little more flair. But other than that, you’re simply getting kale, sunchokes, and breadcrumbs, cooked to a crispy golden finish. 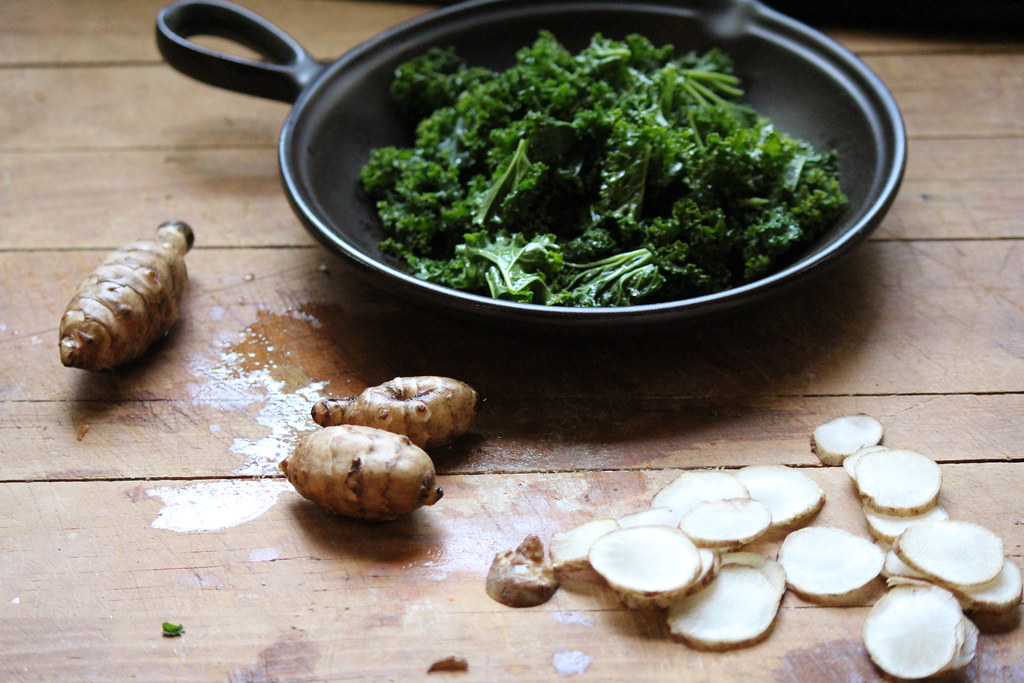 piling the kale in a shallow baking pan 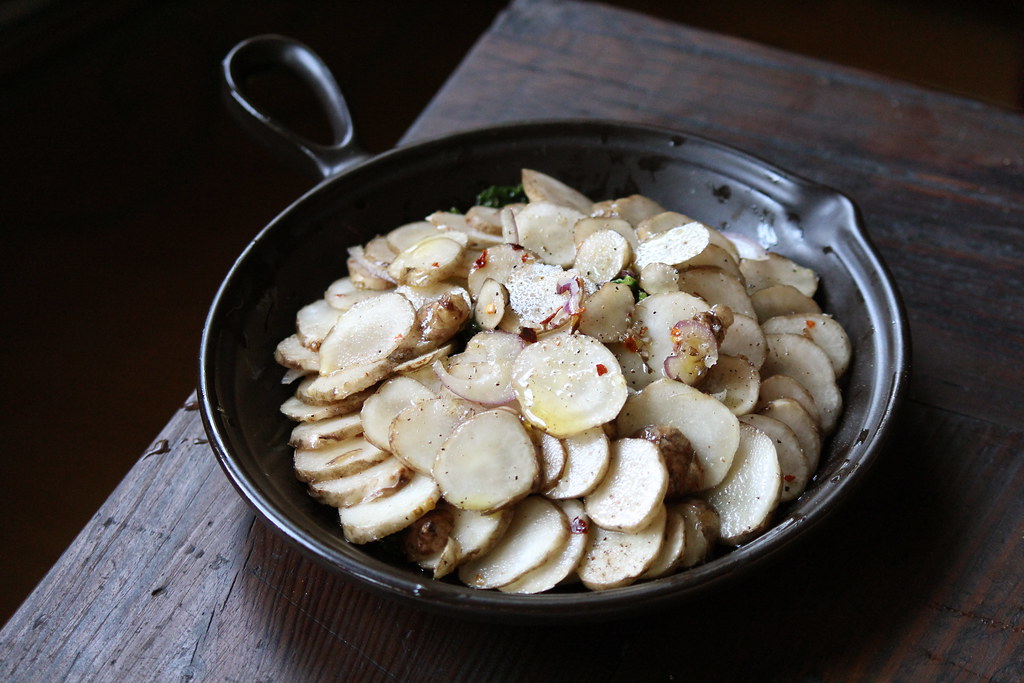 I’d assembled this in a loose pile at first, but found that the sunchoke slices invariably fell to the bottom of a shallow baking pan. So I instead created a layer of sunchokes on top of the torn and seasoned kale leaves, which got more uneven and inelegant as I got the last of them. It’s nice to have some kale leaves sticking out since those brown to a pleasant, crisp chip at the edges when exposed. So pile it together however you like — and yes, if so inclined, feel free to add cheese.

Preheat oven to 350 degrees. Toss the sunchokes, kale and shallot/onion with plenty of olive oil to coat, salt, pepper and optional red chili flakes. Assemble into a shallow 9″ square or round baking pan. Sprinkle the breadcrumbs on top evenly and lightly drizzle a little olive oil on top. Bake for approximately 15-20 minutes, or until the top is golden-brown and the sunchokes are tender.

Four brownie points: Sunchokes are tubers that may look like potatoes, but they can also be eaten raw in salads. Not to be confused with them furthermore, they are lower in carbohydrates than potatoes but higher in natural sugars, which makes them so flavorful. However, the two tubers share many of the same nutritional benefits, and sunchokes are a good source of iron, potassium, and even offer a little protein, which the kale will add to along with tons of antioxidants and Vitamin K.

Nine maple leaves: It’s a straightforward, seasonal dish that utilizes breadcrumbs from stale bread, which might otherwise be tossed out. I’ve got a good, hardened loaf that’s now a jar full of crumbs in my cupboard, thanks to a few seconds in a food processor, so now I don’t even have to have stale bread on hand the next time I want to use crumbs. It’s an easy trick, and it works with most any type of bread (these were actually crumbs from my so-so attempt at making naan).