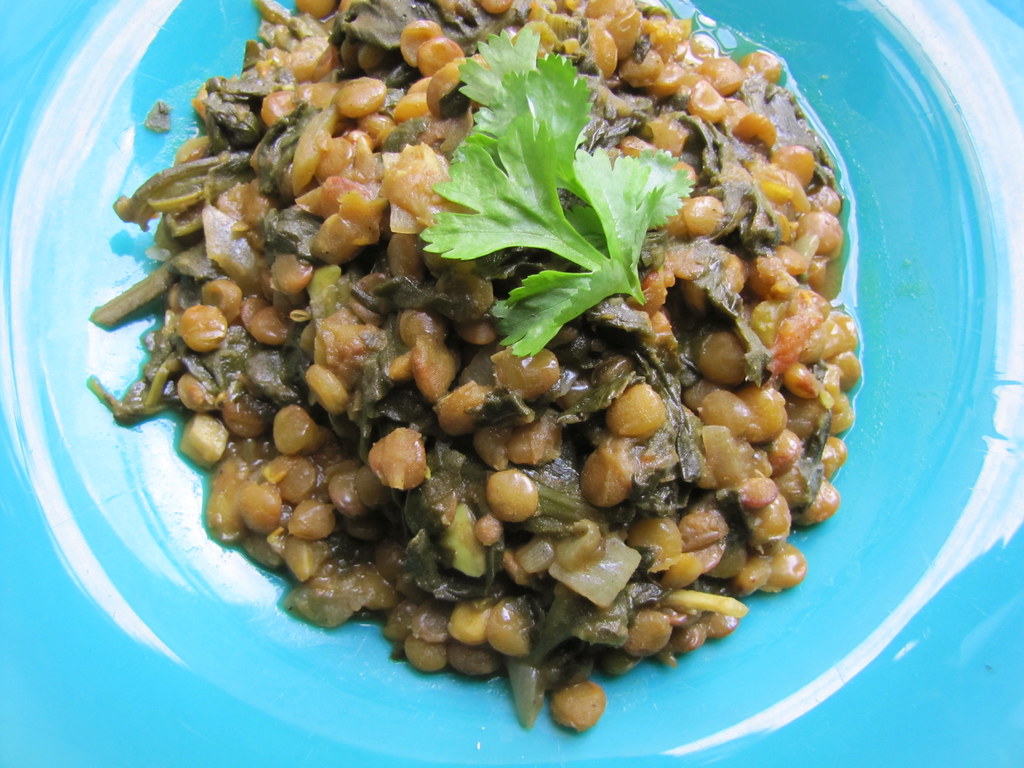 Think spring is the best time of year to eat leafy greens? Fall’s cabbage, Swiss chard, lettuce and spinach are just as great, if not better, having been sowed in summer’s warm soil. In this region, it’s usually a sure bet that they’ll mature in time for the first frost to hit, but before they wilt in strong sun. And despite the recent snowstorm on the Northeast, New York’s local greens are looking ship-shape, especially the spinach.


Actually, common spinach is a pretty hardy vegetable that springs right back after months of cold snow. It’s fairly impossible not to grow this green right. I’ve witnessed it happen on the rooftop at Sixpoint, and fall and winter spinach, with its thick, juicy leaves, are just right for stewing until they dissolve. This is what you want to happen when making palak daal — and it’s likewise difficult to screw this one up. 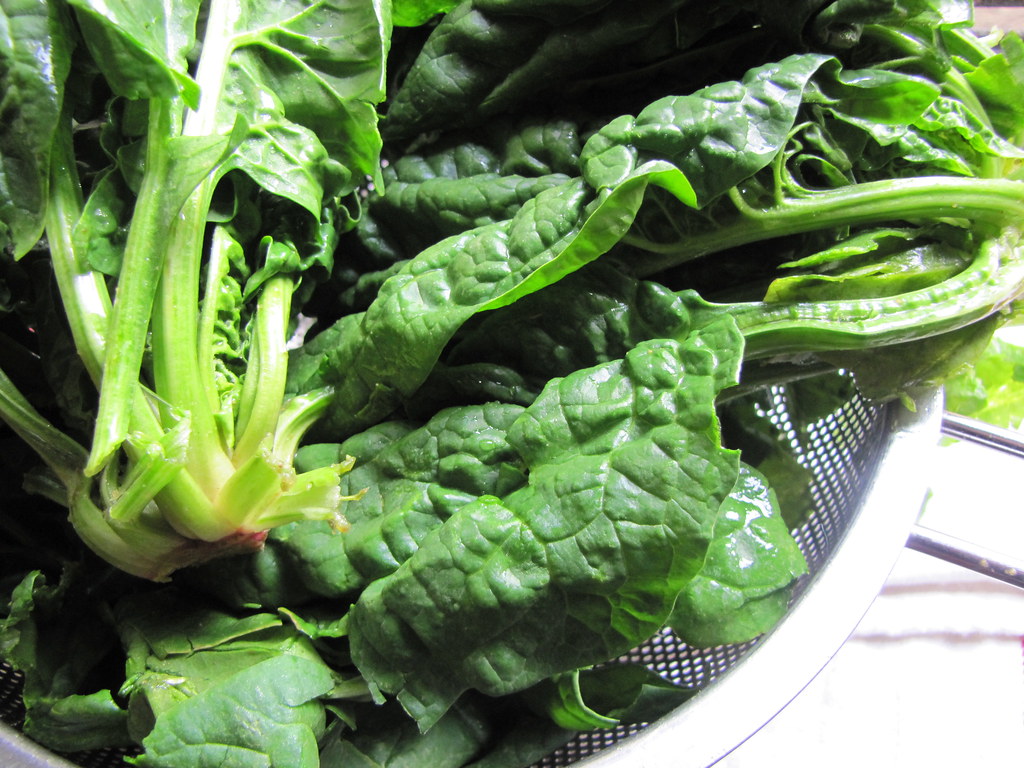 I was invited to an Indian food-themed potluck last Friday. My friend Noah had picked up tons of spices on a stop to India during his recent round-the-globe travels and it was time to divvy it up amongst friends. A few days before the party, I drafted an email to the group asking what they were planning to make, so as not to overstep. But I ultimately discarded that message, thinking it would be more fun just to see what would happen without the pre-plan. Turned out, I didn’t need to worry about anyone else making my lentil dish; the potluck entries were various and all delicious. 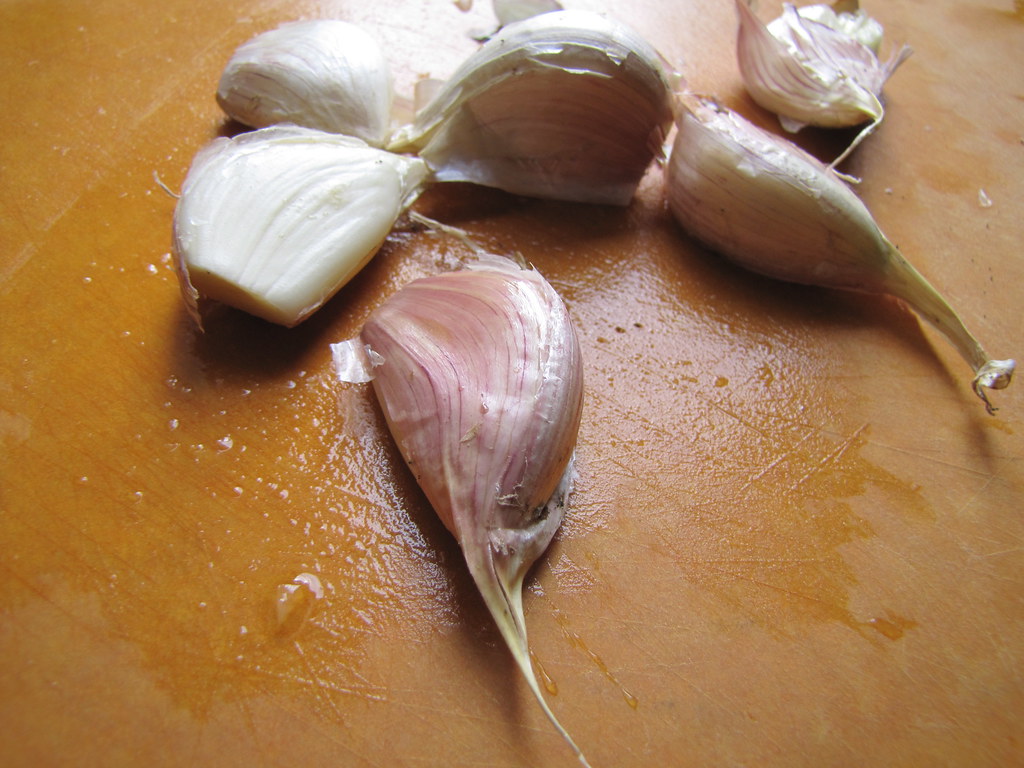 garlic: gotta have it 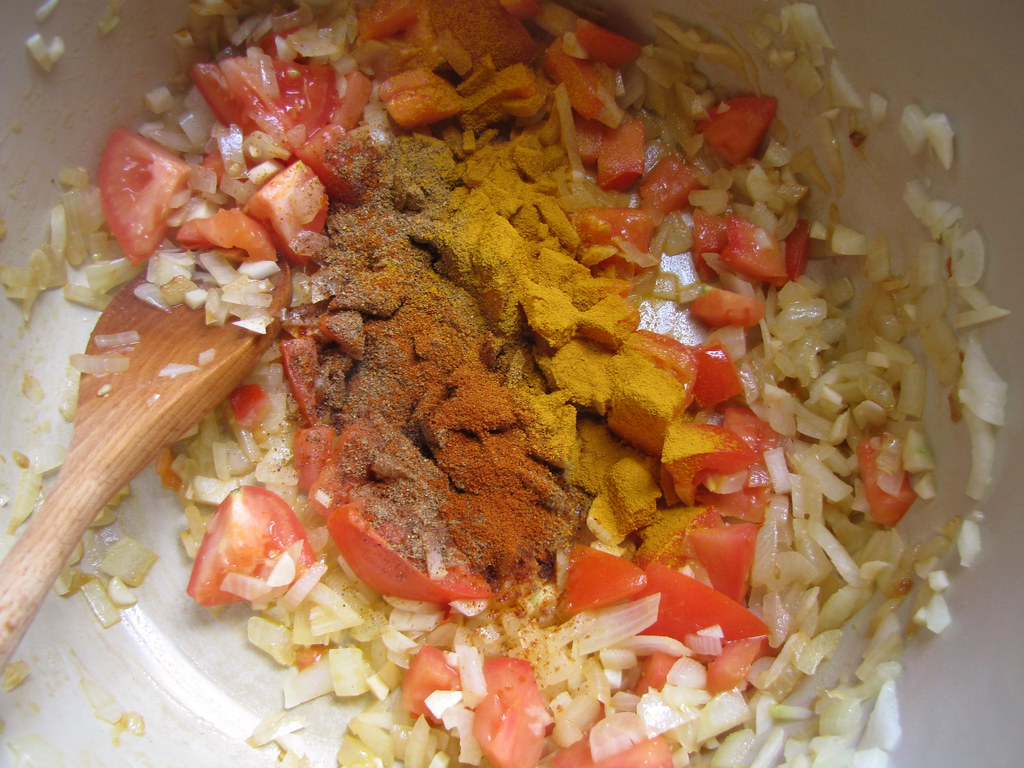 spices are added to sweating onions, tomatoes and garlic

David brought dozens of homemade samosas with three types of fillings. Melissa made a prime example of roasted cauliflower with spices. Laena and Ben brought their just-stewed lamb curry. Matt made an eggplant curry and curried goat. Host Dave made a homemade paneer and spinach palak paneer, chapatis and cinnamon stick-spiced basmati rice to soak it all with. The only strange thing was that no one made chicken curry. I guess everyone thought that someone else was going to make that. 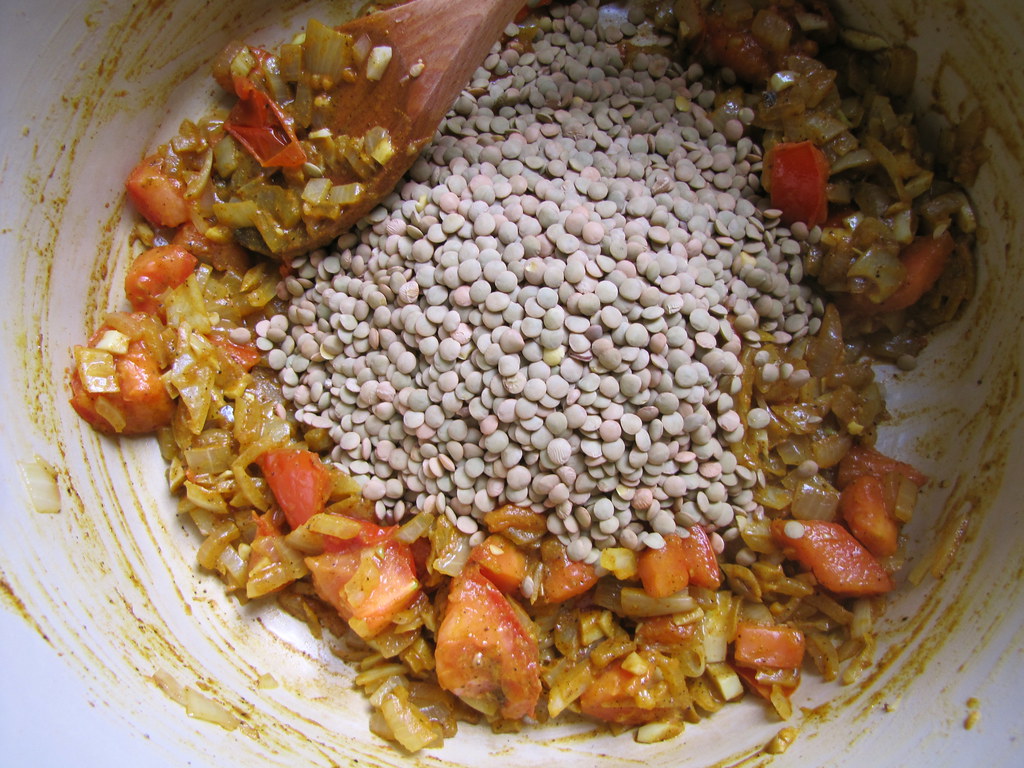 dry daal (aka lentils) are added

The great thing about cooking a vegetarian curry is that you don’t have to simmer it for hours for, say, goat, to become tender. Lentils are incredibly quick-cooking starting out dry and unsoaked from your pantry. I’ve used a garam masala spice blend in this recipe, but you could substitute it with any ground Indian curry spice blend, or an assortment of your own individual spices (I added extra cayenne pepper and turmeric to my daal). From chopping to plating, you could make this dish in one hour easily. 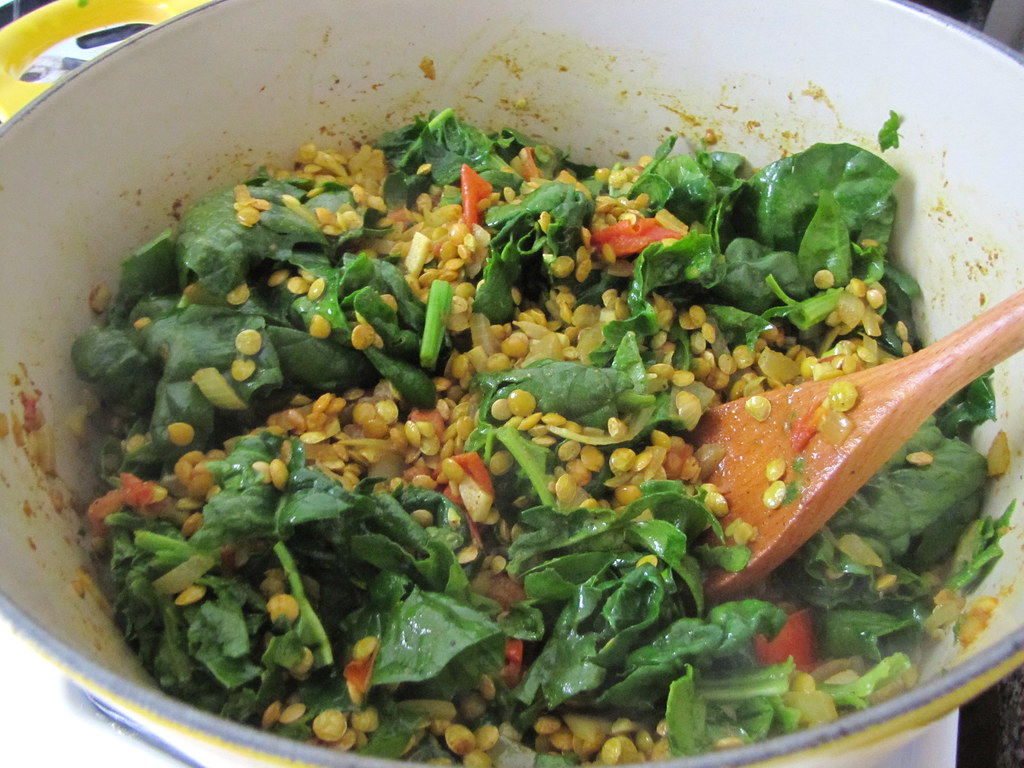 finally, the spinach (aka palak) before a simmer

Now I have whole turmeric, black and green cardamom and tamarind thanks to the party, so I expect I’ll be making more Indian food soon.

In a large, heavy-bottomed pot or Dutch oven, heat the olive oil and add the onions. Cook over medium heat, stirring occasionally and seasoning with a pinch of salt, until translucent, about 5-7 minutes. Add the tomatoes, garlic and spices and cook, stirring, another 1-2 minutes or until tomatoes have released juices and broken down a bit. Add the lentils and stir for another minute. Add the wine and cook until mostly absorbed.

Add the spinach in batches and stir until cooked down. Add enough water to cover by about 1/4 inch and bring to a boil. Reduce to a simmer and cook covered for about 30 minutes. Taste for seasoning and add salt as desired. Add fresh lemon juice to taste. Serve with optional cilantro for garnish. (Can keep refrigerated for up to six days.)

Two brownie points: Okay, another wow. You can eat an incredibly healthful, full meal for two for about a week or so on this stuff for said time and expense. We all know that dried beans such as lentils are a purely vegetable-based protein to nourish yourself in tough times, and that spinach is a killer superfood. But the axes of awesomeness have just collided in this dish, for a meteor shower of ridiculously good, inexpensive, healthy food. Rejoice.

Seven brownie points: Imperfectly awesome. There’s local spinach and inherently low-footprint dried lentils trying to weigh out the carbon burden of necessary imported spices for this dish. I think Noah had the right idea: buy spices while you’re traveling in India anyway to bring to your friends, so the cost of your plane ticket just covered their conscience for the latter.