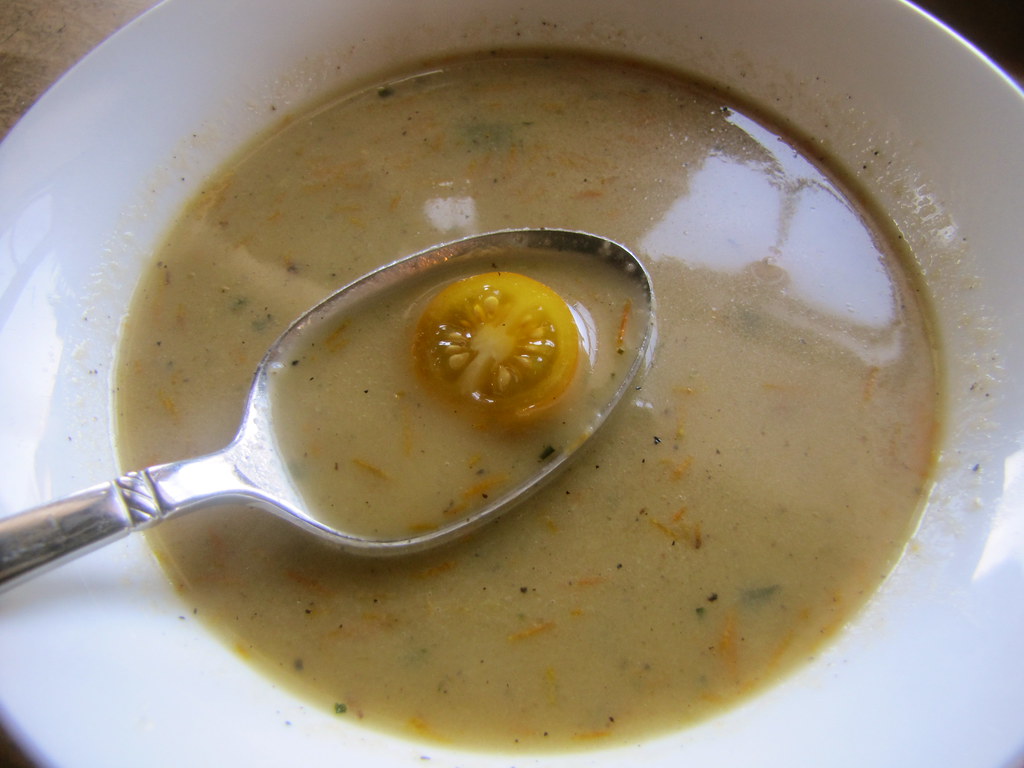 You can fault me for being lax about a lot of things in the kitchen, but when it comes to being resourceful, I am a regular stickler. Therefore, when my family had lobster on a recent trip to the shore, I kept the shells and boiled them down to a concentrated stock. And when we grilled shishkabob sticks and fresh corn on the hibachi, I saved the leftover, blackened sungold tomatoes and few discs of zucchini to puree with it. The result was an unexpectedly — and unexpected — tasty, bisque-like soup the next day. One that I might even intentionally produce all the ingredients to make again, it was so good.


There’s no question that grilling produces a wonderful flavor and charred, tasty bits on anything. We even grilled the lobsters, which I painstaking halved through the heads myself, following Mark Bittman’s recent video in the Times. (He offered an alternative to splintering the live creatures’ heads by par-boiling them first, which I dared not take.) The grilled lobster was great — and much less messy to eat at a table, with the flesh puffing out of the cooked shells like mounds of whipped cream on a sundae. The lobster meat was all licked clean from the carcasses by my family and I, but its sweet, saltwatery flavor lived on for a second round in the stock. 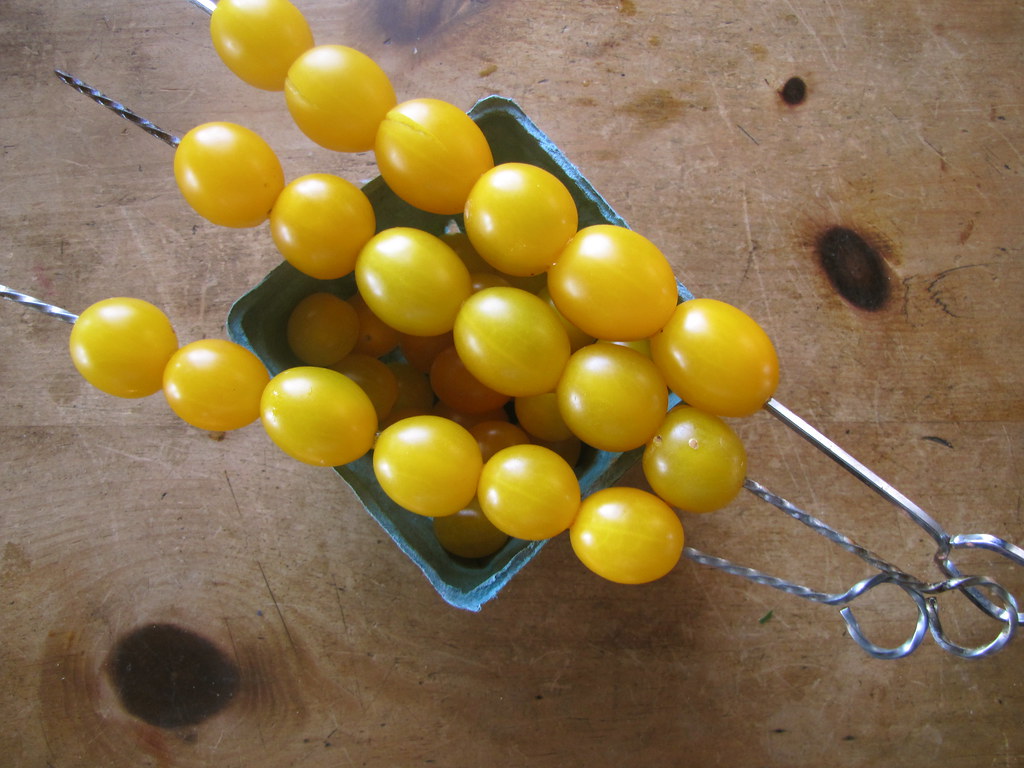 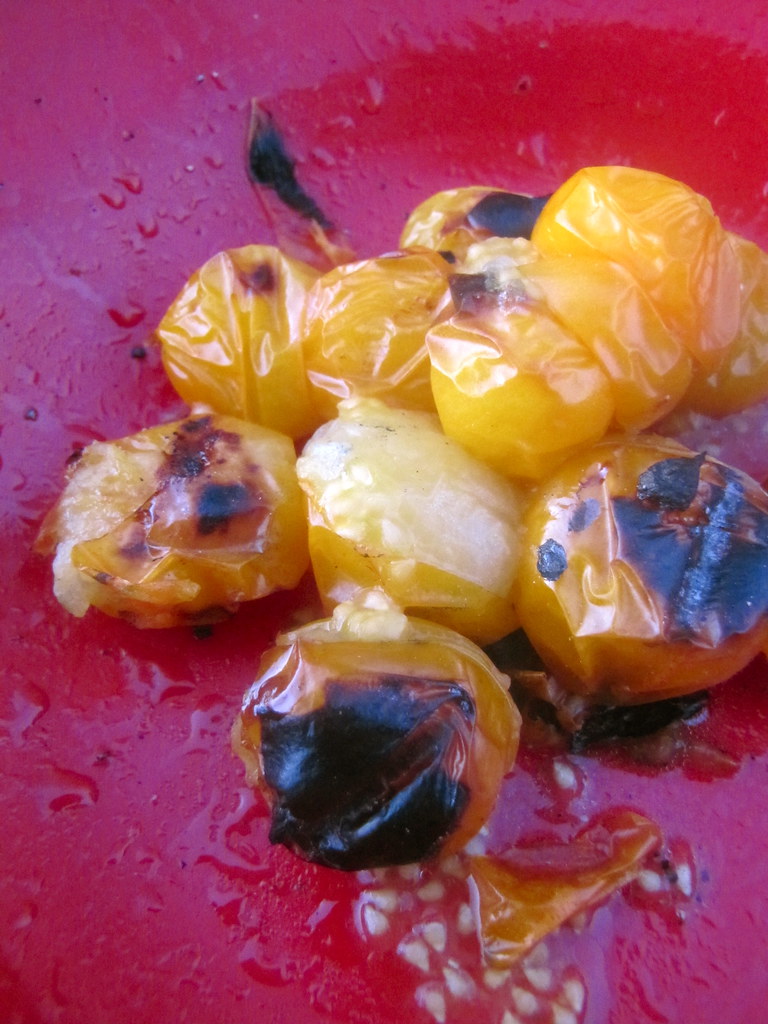 pulled off the grill at the right minute

This taste was offset by the charred sweetness of sungold tomatoes, which I’d grilled extra portions of, half-thinking about a tomato sauce. These grape-sized tomatoes are the color of canaries, and dependently bright and tart. They pop and ooze amicably once blistered over fire, or roasted, and from there on are terrific for pasta, or putting up. I grilled some rings of sweet, white onion as well, and some of those made it into the blend of vegetables for the soup. But to build the base for the soup, I started by sweating some of those in a pot, too. 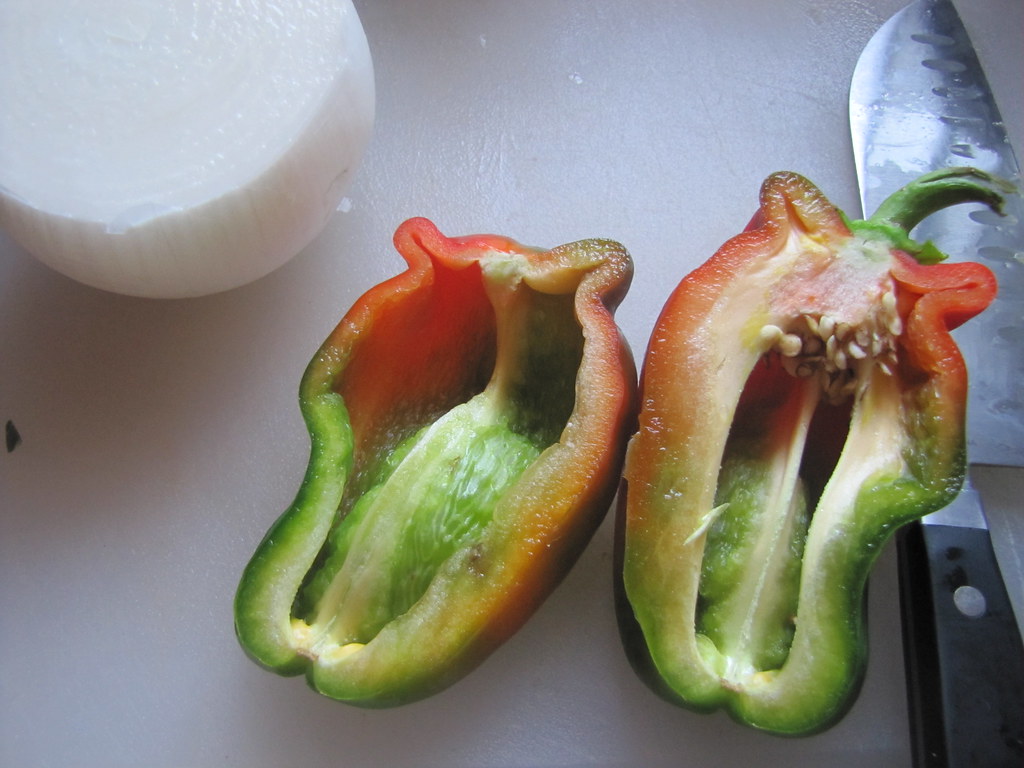 a rooftop pepper and onion on the chopping block 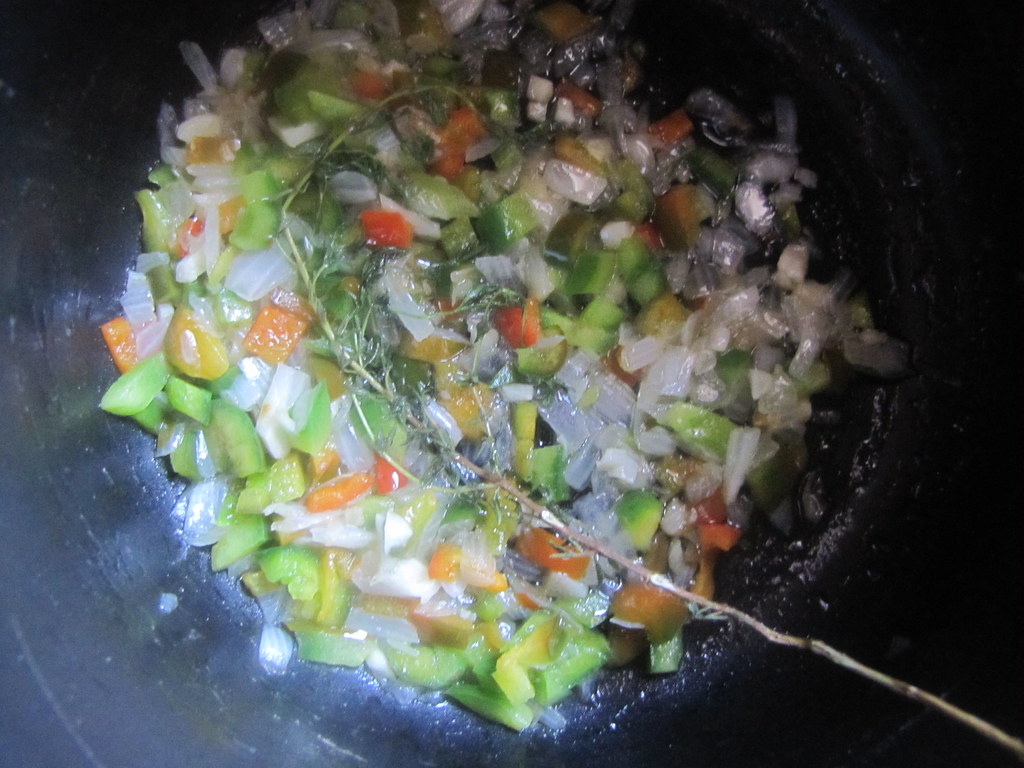 and softening in butter and thyme

In went some chopped bell pepper, garlic and sprigs of thyme from my garden, to sizzle in butter with the onions. Once these were softened, a small scoop of flour and additional pat of butter was stirred in to create a modest-sized roux. The lobster stock (from three lobster shells boiled in just water), was splashed in little by little to avoid clumps, and simmered together for just under an hour or so. Finally, the thyme sprig removed, the chunky soup was pureed in a blender (the only food processing-type equipment available at the rental house I was at). Finer preparations would have strained the tiny bits of vegetables that remained with a fine-mesh strainer for an utterly silken finish. I kind of liked the tiny specks of orange tomato peel that floated on top of my bowl, though. 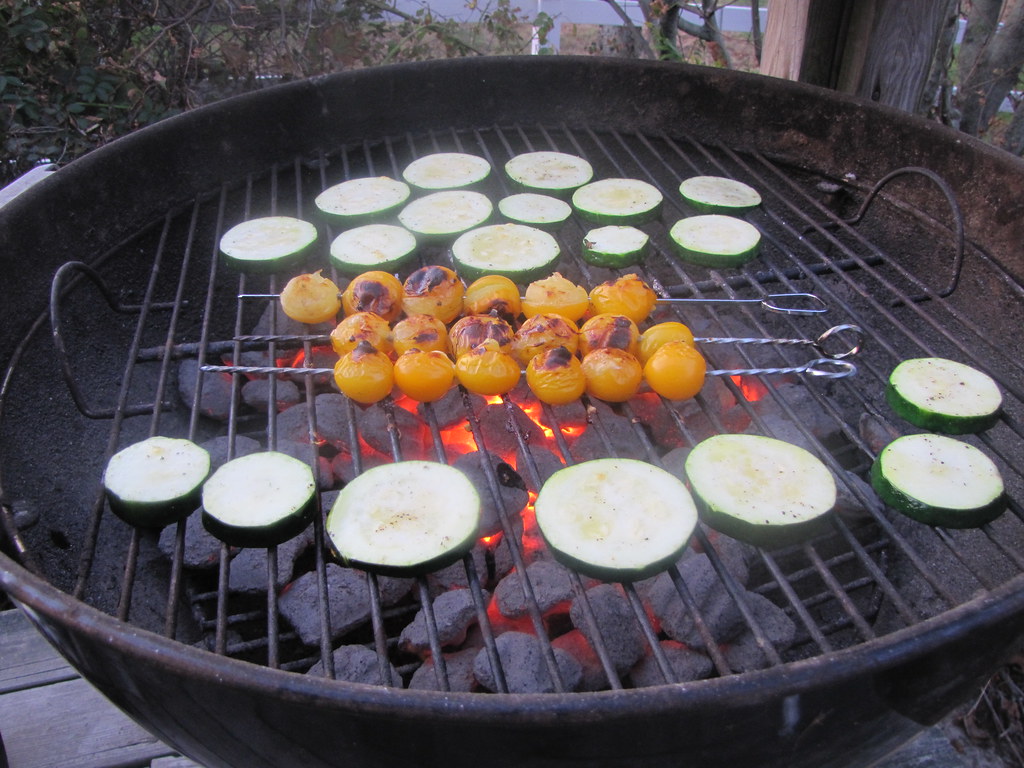 Should you attempt this soup from scratch, without having another immediate use for the lobster flesh, you can always reserve it once it’s just cooked through, to chop up and toss in at the end.

Without, this soup can be a smooth-textured lobster and vegetable velouté. Add some more heavy cream to buffer it up to bisque-like standing, as long as the flavor is strong.

Cover lobster shells with water in a large pot. Bring to a boil and cook until the liquid has reduced to about one-third (around two hours). Strain to remove surface scum.

Skewer the sungold tomatoes and coat the zucchini slices in salt, pepper, and a bit of olive oil. Grill over a high-heat flame until just charred on each side.

In a medium-large, heavy-bottomed pot or Dutch oven, heat one tablespoon of butter. Sautee the chopped onion, pepper and garlic over medium-low heat, stirring occasionally, and add pinches of salt, pepper, the optional cayenne pepper, and the thyme. Once vegetables are softened, about 6-8 minutes, clear away the center of the pot and add the remaining two tablespoons of butter and the flour. Stir briskly until it begins to foam and incorporate the vegetables in with the roux. Stir, letting it bubble, for 2-3 minutes (or further if you want to develop a darker, more intense-tasting roux). Stir in the lobster stock little by little while whisking to avoid any clumps (it will get blended later, so it’s not a huge deal). Add the grilled vegetables, and bring mixture to a boil. Reduce to a simmer and cook gently for 30-45 minutes. Once cooled (mixture can be refrigerated overnight at this point, too), transfer to a food processor or good blender and puree for several seconds until well blended. Return to the pot to heat up, and taste for seasoning. Add the optional cream or milk, bring to a serving-hot temperature, and serve.

Five brownie points: This soup could be very heavy if you make it so, but it’s so rich with flavor (rather than cream or butter) already, that it’s easy to go leaner on it. The powerful flavor of three condensed lobster shells was surprising to produce in a couple hours of simmering. And the tastiness of the grilled vegetables shines through as well, creating a sort of hangover of the previous night’s meal.

Seven maple leaves: From bones to crustacean shells, using all parts of an animal are a great way to be a little more green. And there is no reason why you shouldn’t have them at some point in time if you eat meat and seafood. Even if you’re not using it immediately, the stock you could build from them is much more tasty, economical, and efficient than buying pre-made broths, and stores easily in the freezer. Also efficient (if requiring a little more creativity) is saving leftover cooked vegetables for another use.