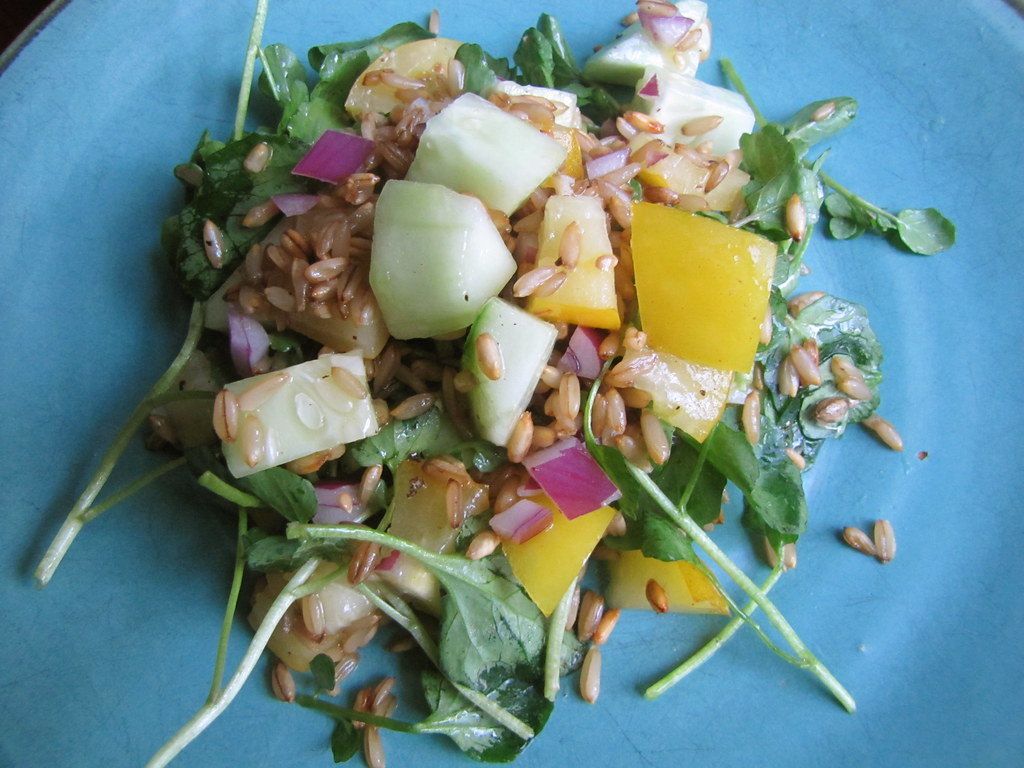 Here’s one way to eliminate fattening nuts from your salad: dry-toast a whole grain to toss in. You’ll still get a similarly satisfying flavor and the energy-packing proteins and fullness. But with more fiber, and less fat.


That’s what I did by accident when I began cooking wheatberries with not enough water. A few minutes into it, I heard sizzling, scorching sounds from the kitchen, but didn’t exactly jump to the rescue right away. The resulting darker-colored grains were distinctly chewy and full-flavored, rather than soggy and cardboard-tasting. And when I mixed them into a salad in fewer ratio to watercress, cucumber, red onion and yellow tomato, drenched with lemon juice, the experience was akin to a very nutty and light vinaigrette-dressed salad. 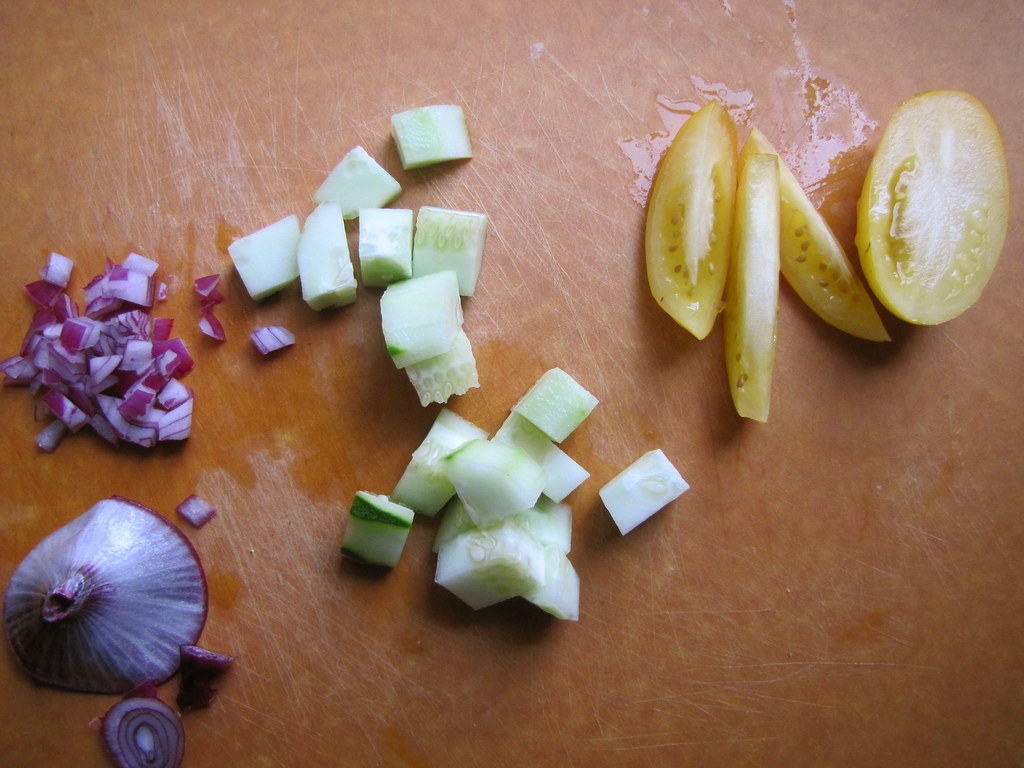 Don’t get me wrong; starch salads are some of my favorite things in the world. Potato salads, pasta salads, and whole grain salads with a whole lot of those first are a beloved summertime staple. It turns out that when the wheatberries weren’t full-blown from having been soaked and cooked enough, the grain just reminded me less of rice than of toasted pecans. 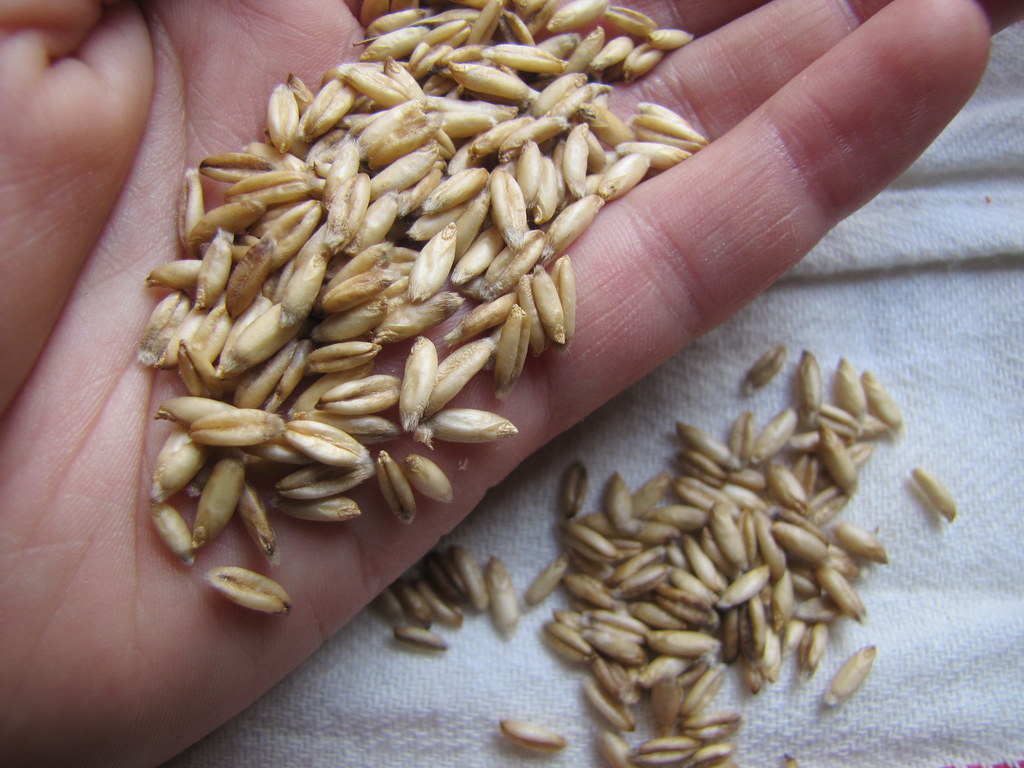 Wheatberries are, put simply, the whole grain of wheat. It’s not chopped up like bulgur or steel-cut oats, or processed like flour or cream of wheat. It’s the whole germ, bran, and kernel of wheat, minus the husk (which is not pleasant to eat nor nutritious anyway). You can find them at natural food stores or at the Greenmarket, from Cayuga Organics. Despite my less-cooked outcome, they’re as easy to cook as rolled oats or rice on your stove. And they taste really great, especially when you scorch them or toast them a little, as I’ve learned. 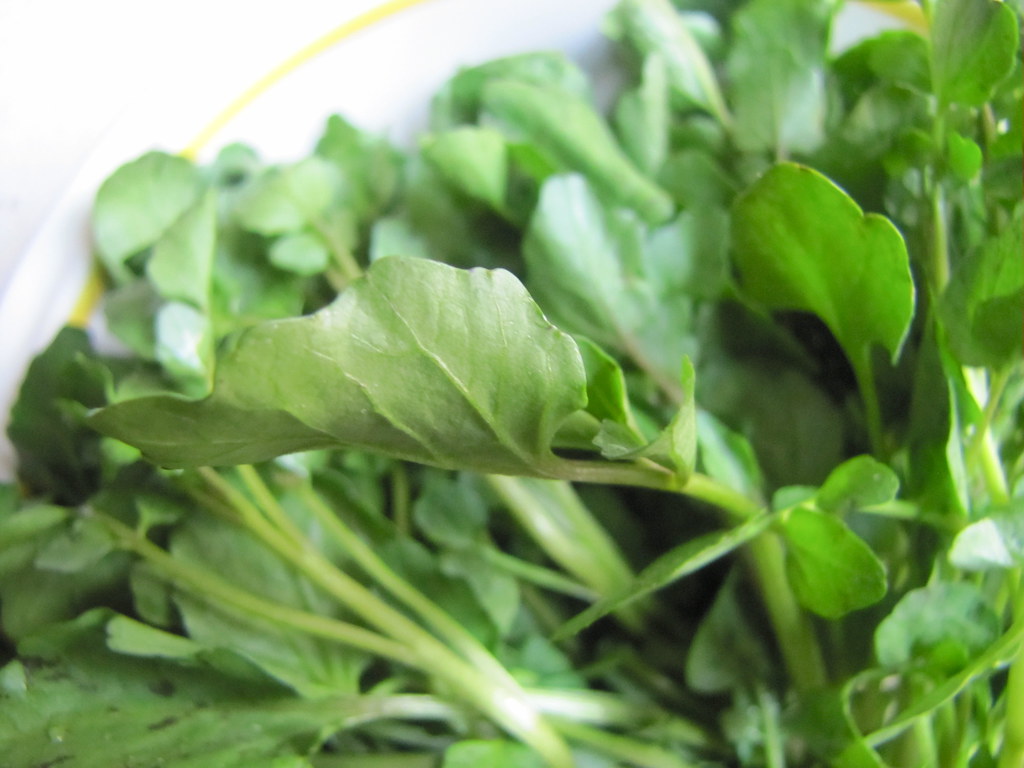 Are you a hydroponic gardener or wannabe-of which? Then watercress will undoubtedly be a crop you’ll consider when starting out. These leafy greens are some of the oldest-known for human consumption, and they’re so quick-growing that it’s no surprise. It’s biologically similar to other plants in the cress family, like peppercress (a familiar weed, actually), or mizuna, but it can thrive when grown in just… water. This accounts for its succulent, juicy stalks and slightly spicy-tasting leaves, which keep in your crisper longer than other delicate greens. I have been a fan of them ever since enjoying them sauteed in Chinese stir-fries by my mom, or Chinese restaurants. 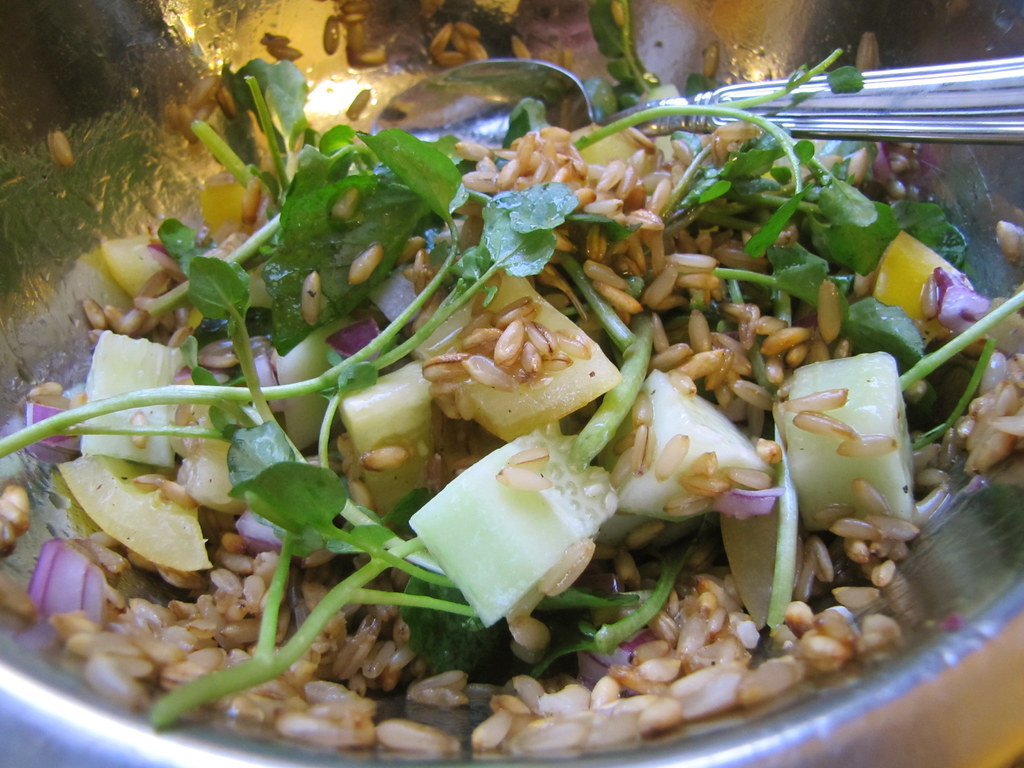 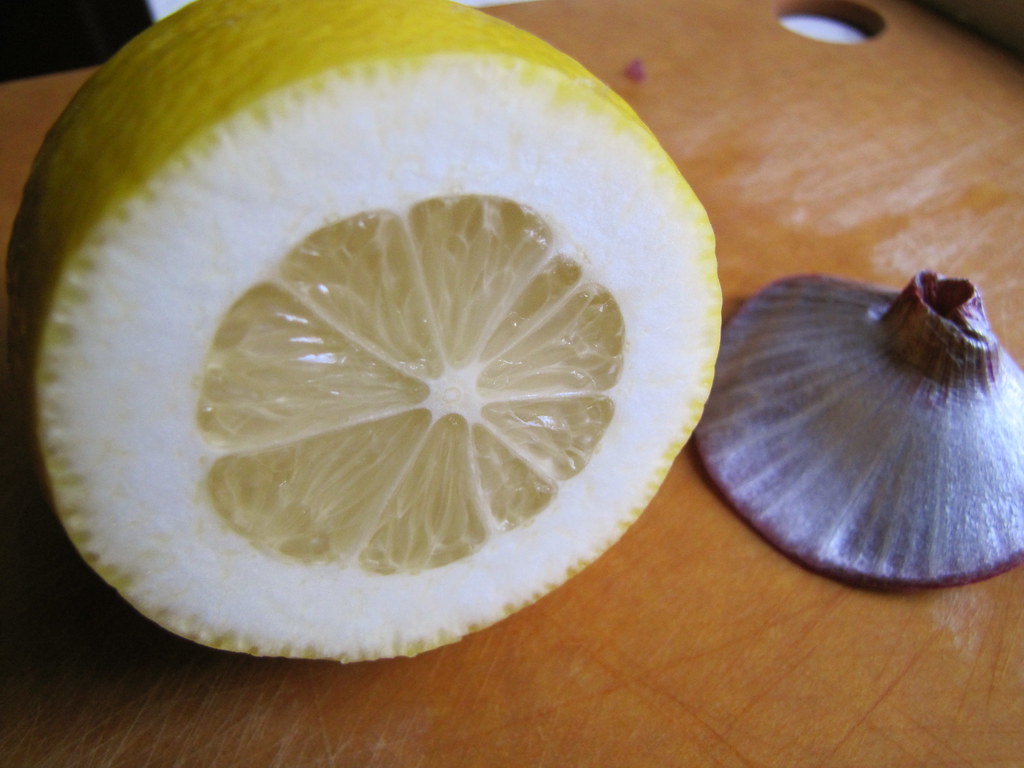 the just-tossed salad, and its crucial seasoning, fresh lemon

This salad might only be as good as the tomatoes, cucumbers, onions and olive oil that you coat it all with. So use your best olive oil, with a generous hand. You won’t lose any flavor from it due to the lack of heat, and it’s virtually the only fat here, so go crazy with it if you wish. This salad packs well in advance for brown-bag lunches; keep a stash of watercress on the side and pack it with the salad at the last minute to prevent more wilting than you might want, though.

Heat a large saucepan and gently toast the wheatberries over medium-high heat for 2-3 minutes, shaking the pan occasionally. Add water to cover by one inch, and reduce heat to a simmer. Cover, and let cook until tender, about 10 minutes. Let cool 5-10 minutes.

Combine the cucumber, tomato, onion, lemon juice, salt and pepper in a large bowl. Fold in the cooled wheatberries and the watercress, and adjust seasonings to taste. Serve immediately.

Two brownie points: I’m not sure where to start — this is an exceptionally healthy and lean, filling meal. It also has an exceptionally cooling effect, thanks to the cucumbers and cress, and builds slowly on your blood sugar thanks to the whole grains, thus ensuring more steady energy levels. The only danger is really eating too much of it!

Eight brownie points: When eating an entirely plant-based meal, you can feel pretty efficient about your Earth’s footprint as well as your energy levels. It helps that watercress can be harvested in so many areas, and is therefore likely to have been done so close to your point of purchase (check labels to be sure), and that now is the height of summer vegetable harvest season, so cucumbers and tomatoes are readily available nearby, if not in your own garden.