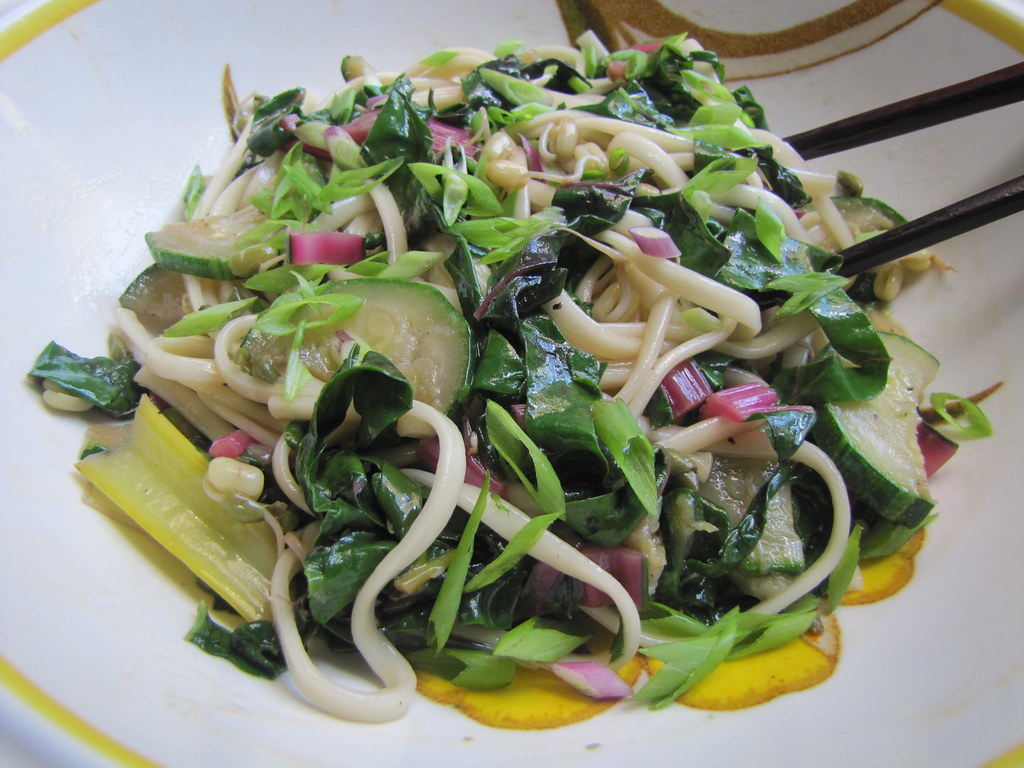 What do you do when it’s too hot to cook, but you only have vegetables that don’t work so great raw? You stir-fry them, and stick them in a fridge to cool down. It only takes a few seconds of cooking, promise. And they’ll taste great with cold, slippery noodles coated in sesame oil.


If there’s one thing I can always muster up an appetite for no matter the heat, it’s cold sesame noodles. But who wants to eat little more than a tangled mess of starch? Swiss chard and zucchini might seem like odd bedfellows for this dish, but they sure didn’t look (nor smell) half bad once it was all tossed up. Not only is this a good way to use up any manner of vegetables, but you’ll likely use more vegetables in proportion to noodles, since they’re cooked down. 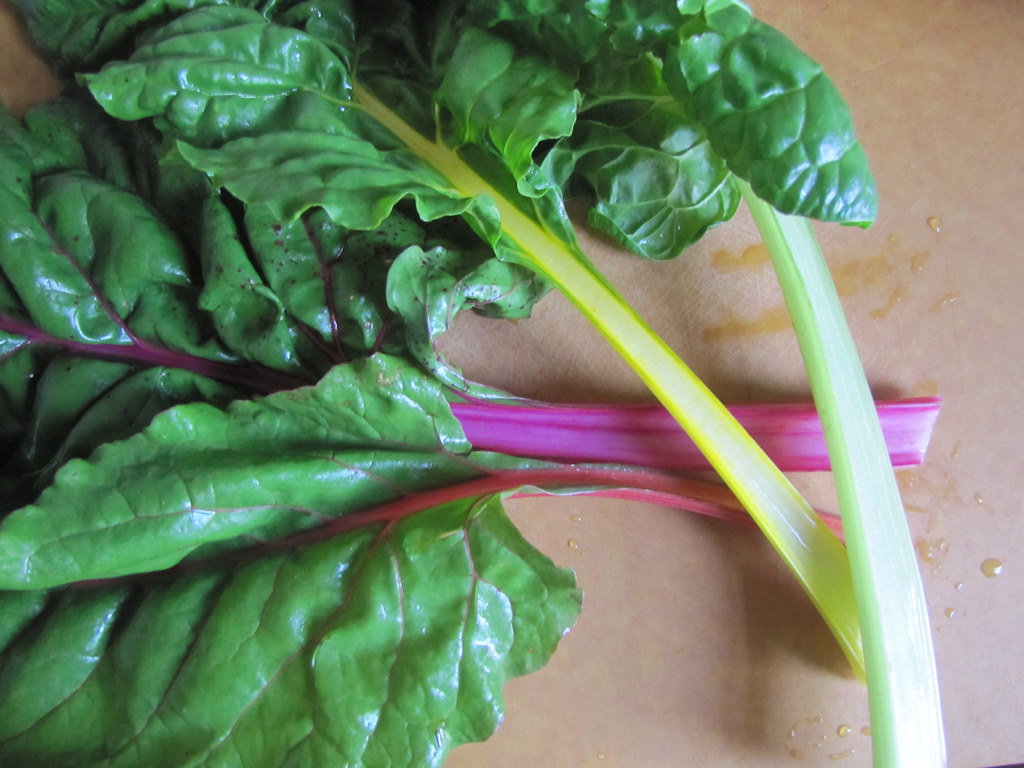 My crisper has been overflowing with sauté greens lately, vibrant Swiss chard stalks and endless heaps of different kales. I stuffed much of the kale into jars of soon-to-be kimchi, or something lacto-fermented of that nature without cabbage. But the rainbow chard that keeps on coming in from my CSA just looked too pretty to let ferment. The multi-colored stems are crisp and juicy, and retain some bite after a quick sautée, while the leaves wilt to silky-textured threads. 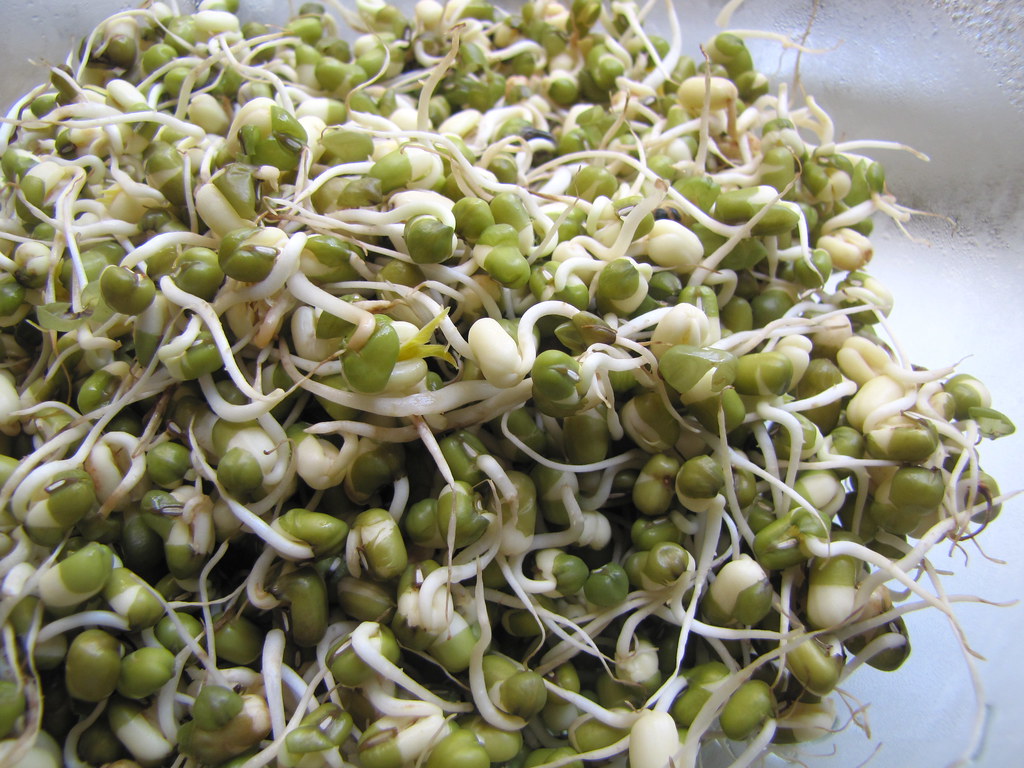 I made some mung beans sprout the other day. I’m not sure what inspired this, but when I saw a package of green, dried mung beans at the Chinese grocery I just thought, “I’m going to sprout these.” It was almost as easily done as said. The beans were soaked overnight (following the directions of various sources online), then just sort of patted down with damp towels for a couple of days. It worked.

Only, I was a little too frightened to eat my handiwork raw the first time. The sprouts would stay in my refrigerator, virtually untouched, a few days. Finally, I decided that a quick stir in a hot pan was a good compromise, so as to kill off any damp-towel bacteria(?), or something of which I wasn’t sure. 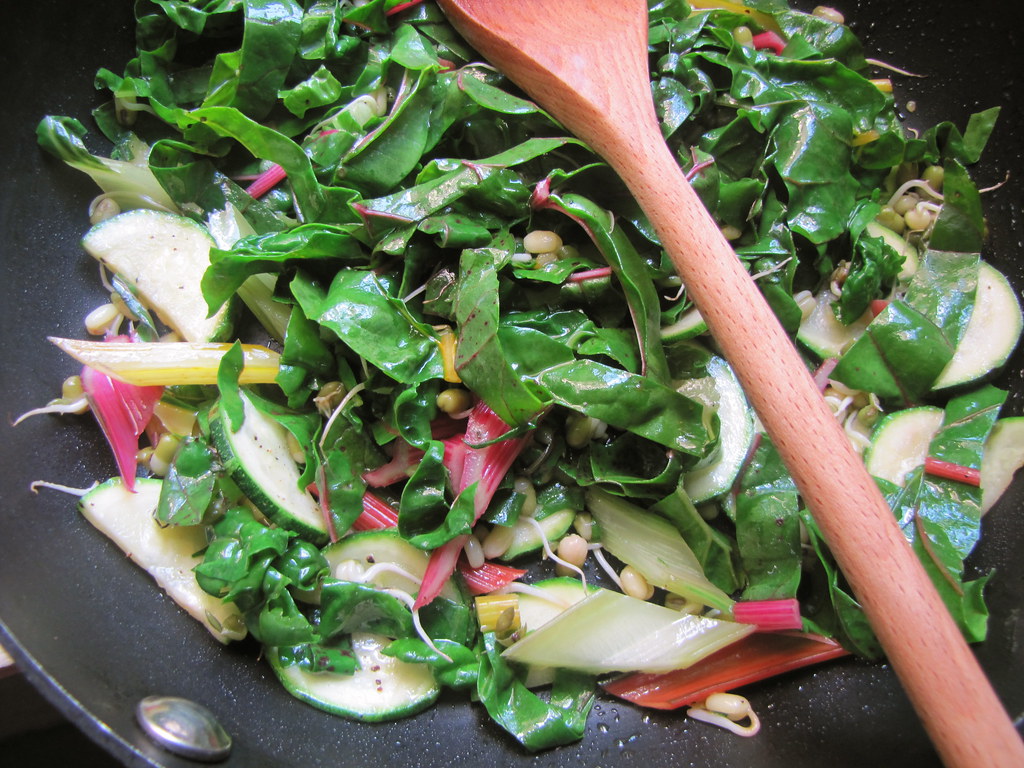 the colorful stir-fry, before being chilled

Suffice it to say, the beans were fine in the end — great, even, as they lent the dish a distinctive nutty taste (from the beans, still attached to the sprouts) and crispness (from the clear sprouts). I’m probably going to graduate to eating the stuff raw soon.

You can certainly stir up a thick, peanut butter-y noodle sauce to toss everything with, but my sauce this time around was little more than a clear slick of sesame oil. Toasted sesame oil has an intoxicating flavor that will spread throughout a dish with surprising efficiency, especially when kept cold. That’s why it’s best used as a finish, like really good olive oil, rather than for cooking anything with. The other sauce I splashed a scant dash of in here was a bottled citrus-seasoned soy sauce, or ponzu. You can substitute it with soy sauce and maybe a tiny splash of rice vinegar if you don’t have it instead. 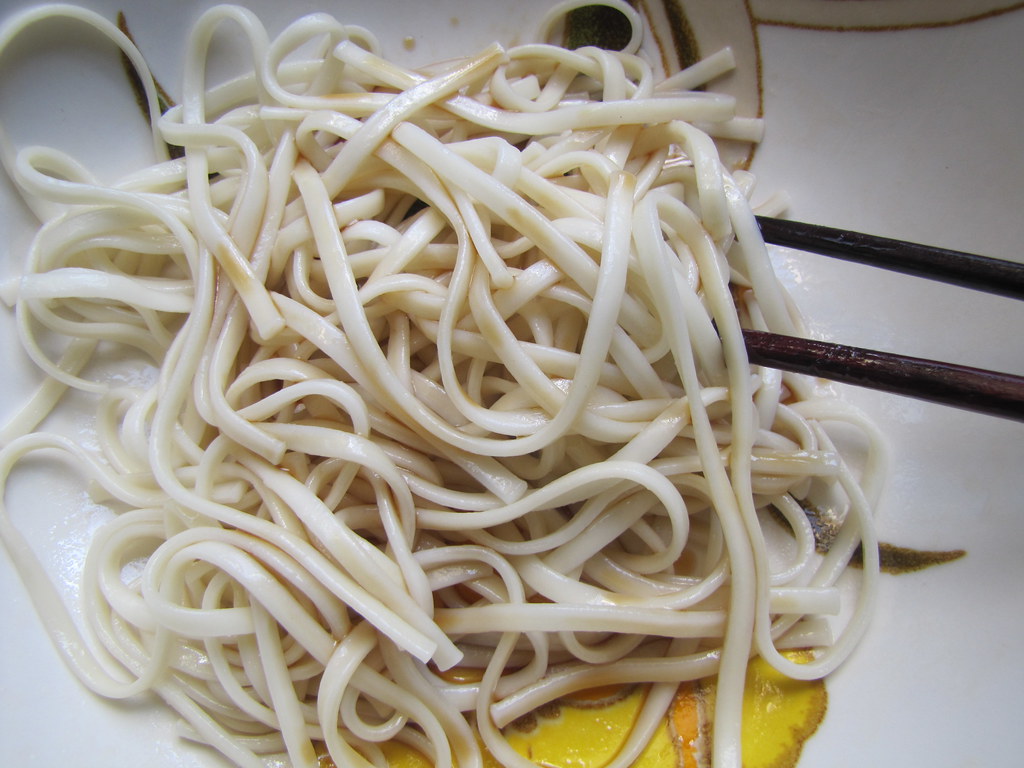 drained and chilled noodles are tossed with ponzu and sesame oil

After a confetti of fresh scallions at the end, this chilled noodle platter was just as healthy and simple as it gets. Ah, hot summer days. Isn’t the cookin’ easy?

Heat a large saute pan or wok with the vegetable or canola oil over medium-high until hot. Add the zucchini and season with a pinch of salt and pepper. Stir or toss frequently for about 1 minute. Transfer to a bowl and place it in the refrigerator. While the pan is still hot, add both the Swiss chard stems and leaves, and a pinch of salt and pepper. Stir frequently for about 1 minute, and add the bean sprouts to cook another minute, stirring. Transfer mixture from the pan and refrigerate.

Toss the noodles with the sesame oil and ponzu to taste. Once vegetables are cool, stir in all the vegetables, and garnish with the scallions.

Two brownie points: It would be better if a heartier, whole grain noodle were used, for fiber and slower absorption of sugars for long, hot summer days. But if you’re using as few noodles as you might tend to here like me, then it’s essentially a bed of antioxidant-rich leafy greens, fresh zucchini, and little mung beans for protein. Not such a bad range of nutrition for a small, simple meal.

Seven maple leaves: This is a great way to use up all those CSA vegetables I’ve been hearing so many others scratch their heads about, too. Anything goes — add some shredded carrots, or kale instead of the chard. The assortment can go with any season, too, so once the wintertime blues hits, try hardy cabbages quickly sauteed instead. This one gets fewer marks, though, for the imported condiments (sesame oil, ponzu) and noodles.