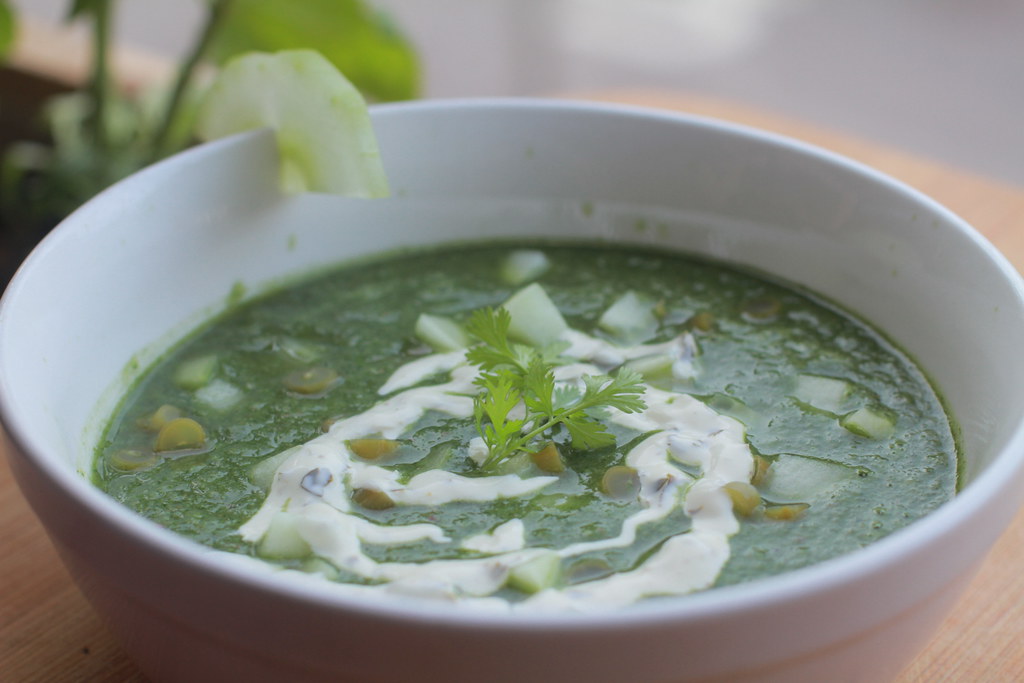 I’ll admit, I’ve been feeling a little overwhelmed by all the greenery that’s coming in from my CSA — and growing on the roof. I hit a breaking point when my friend Wen-Jay (of Local Roots CSA) offered me some leftover stinging nettle from a pick-up day, and I found myself biking home with two swinging backs full of stinging weeds, wondering how I was going to stuff them in my fridge. I thought of buying a juicer — a quick, mindless solution to getting it all in my body like a transfusion of deep-green. But a classic Spanish recipe, made with mountains of muddled greens and fresh herbs, came to mind instead.


And it’s one of the courses that will be served at a special dinner I’m hosting this Sunday, the Feast of 61 Local Ingredients. Yes, we’ll be feasting on this green gazpacho, and much more, to celebrate the start of a lush time of year for eating locally. Reservations for the event can be taken here, and we’ll start the night off with a few drinks in the bar joined by some of the local farmers and food artisans whose work will be used throughout the courses.

It might sound like a fantasy to throw 61 locally-sourced ingredients into one meal, or one of a very complicated and epic scale. But this dinner aims to prove how easy, delicious and actually practical it can be. For instance, this bowl of green gazpacho has no less than fifteen ingredients foraged from within the state. A lot of them are herbs — there are ten types of herbs in total for a nose-tickling taste — then it’s cucumber, stale bread, the stinging nettles, spring onions, spicy pickle brine and chopped green bean pickles, and creme fraiche to finish. Serve chilled with chunks of cucumber and the pickled green beans, it’s cooling, nutritious and packed with fresh, vibrant flavor. I think I just listed off more than fifteen ingredients come to think of it, and am hoping that there are enough nasturtium blossoms on my roof to garnish each bowl with on Sunday, too. But the point should be clear — it’s a cinch to pack sixty-one ingredients from the city into one meal, and it will be all the better for the food, too. 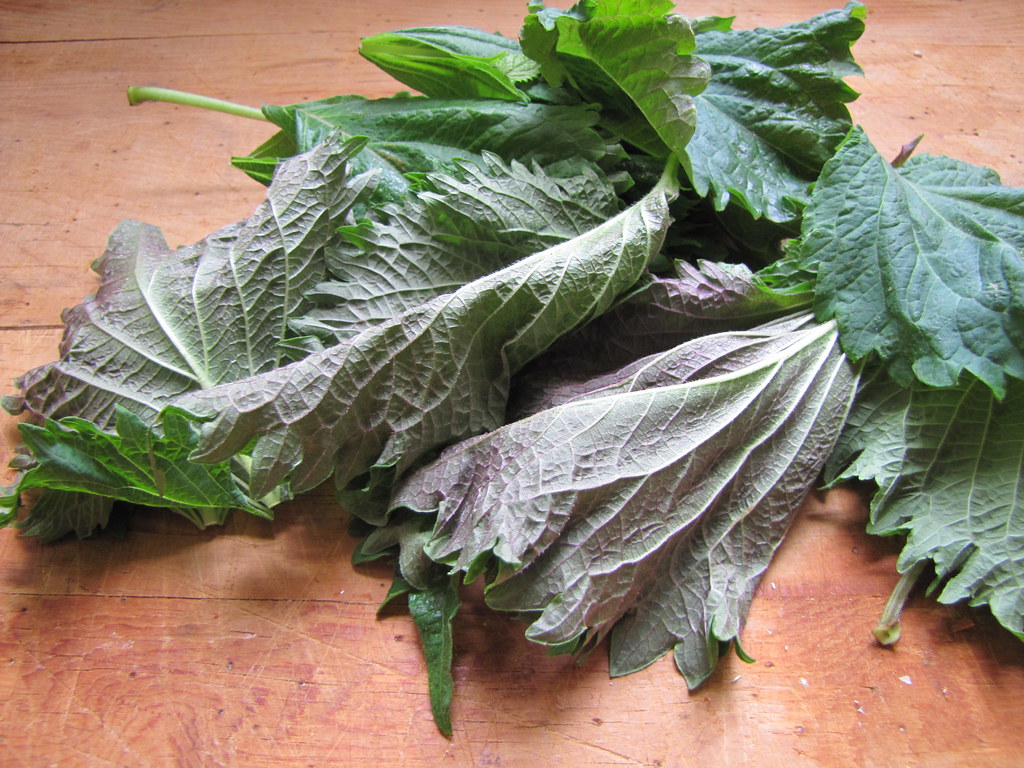 a handful of shiso and other assorted herbs are blended in 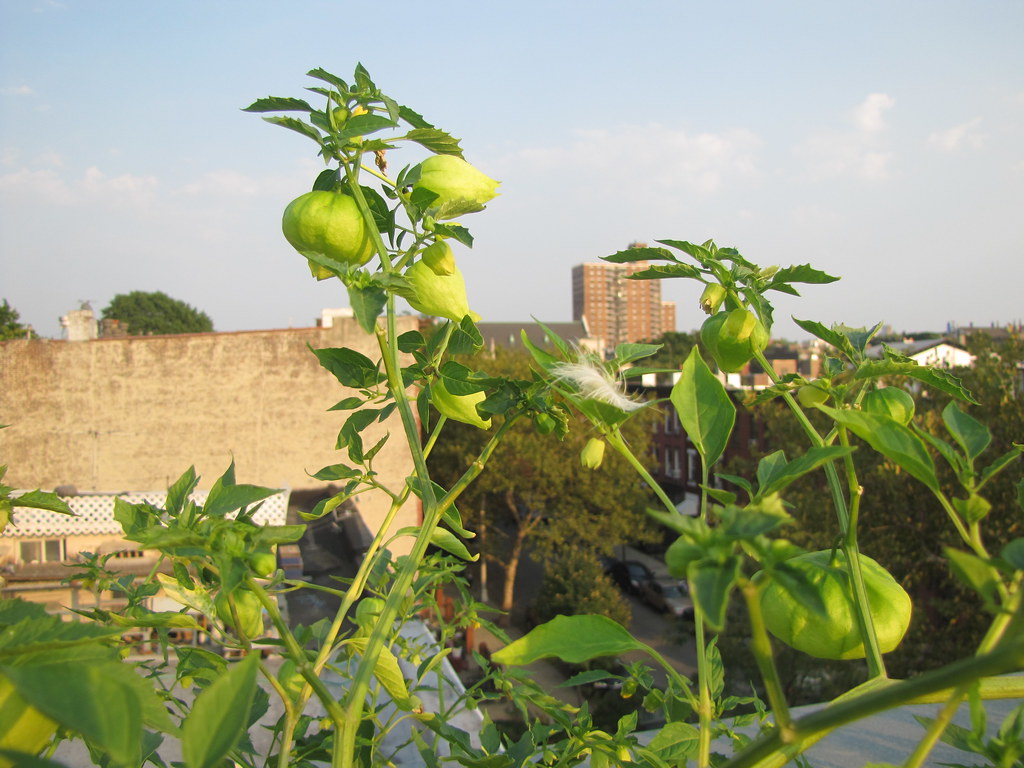 Similar to a spicy, tangy chimichurri or salsa verde, this soup has a bright kick of vinegar thanks to all the pickle juice. It’s based on more classic green gazpacho recipes, but swaps in flavorful pickle brine (because it’s an oft-unused part of the jar) for red wine vinegar. Gazpacho is actually a peasant dish, which incorporates stale bread that’s soaked and mashed up to stretch it. Both red and tomato-less green versions of it traditionally have this, but it’s commonly forgotten nowadays. The stinging nettles are a liberal twist, but once blanched and smoothed into a puree, they add density and don’t distract in taste — and it seemed appropriate to the nature of the dish to use whatever needed to be used up, that was green.

This soup was tested out (and photographed, at top) with Josh Greenfield, of Y-I-EatN. His rooftop was responsible for the brunt of the herbs in this test-run, as his brother Mike has a small operation up there that looks like it could feed a dozen for the summer pretty soon. Thanks to an underutilized patch of blacktop on their roof, Mike’s gone greenthumb, loading up on heirloom seedlings at the Greenmarket each week (there are three unique types of mint in the mix). Sound familiar? See it happening on the neighboring rooftop or backyard, too? Yes, in addition to all the great farms upstate and in surrounding farmland, the city has become a valuable place to procure ingredients from, too. Just ask the farmers of Brooklyn Grange Rooftop Farm, who will also be contributing produce to the meal.

The rest of the menu can be found here as well, and all the contributing ingredients and farms/producers behind them will be listed at the event. I’ve gotten many requests for more vegetarian-friendly food events from readers and people I’ve met in person, and I’m listening to you guys this time, because there will be a definite vegetarian option at this meal that should be no less satisfying than the meat main course. Finally, why sixty-one ingredients in this? Well, because that’s the name of the bar this dinner is housed in, 61 Local, in Boerum Hill (its address is 61 Bergen St.). It’s a terrific place that testifies to the same theory as this meal, with a drink and food menu that focuses on the region’s best.

Hope you can join us, and if not, here’s that recipe for the gazpacho!

Chop the seedless ends off the cucumbers and finely dice into cubes for garnish. Chop the rest of the peeled cucumber in large chunks. Puree in a food processor along with the nettle, herbs, and pickle brine. Soak the bread in the mixture for a few minutes, then puree along with the bread.

Transfer to a blender to liquify mixture until frothy at top. Season with salt and pepper to taste. Divide amongst four serving bowls. Garnish with a dollop of the creme fraiche each and sprinkle with the chopped pickled green beans and cucumber cubes.